It’s been a tough year at Botany Pond, mostly because Audrey the Mother Duck, who had 12 babies, was a homicidal hen bent on killing any duckling in the pond that wasn’t hers. And that meant that any mom and babies coming to the pond after her were doomed (she was the first to breed).  In the past we’ve had up to three broods of different ages coexisting pretty peacefully in the pond. Not this year!

After Audrey killed one or two interloper ducklings, I had to make the hard choice to remove every “undocumented duckling” (as we called them) who came to the pond with their mother. The choice was heartbreaking, as it involved separating ducklings from their mothers breaking up a new family, but also ensuring that ducklings wouldn’t be slaughtered en masse.  This meant that this summer I had to go into the pond four or five times and, always helped by people onshore (and a few stalwarts who also went in with me), capture the babies with a butterfly net, dry them off and keep them warm and together,  warm, and then take them to the Chicago Bird Collision Monitors, who would take them to Willowbrook Wildlife Center for rehab, rearing, and release. Many thanks to CBCM and Dorothy, their local contact, who helped us immensely

All told, I rescued 31 ducklings—every single one that wasn’t immediately pecked to death (those were only about 2 or 3). Going into the pond always gives me a case of swimmer’s itch, since that parasite is carried by ducks, and of course I got prettyr banged up by the hidden underground rocks and lunges for ducklings. Here’s what my legs looked like after one of my final rescues. The rash and intolerable itching begin about two weeks later.

Also, all 12 of Audrey’s babies fledged (our motto is “no duckling left behind”), but we couldn’t prevent one from flying into the library glass across the street, killing itself. We gave it a dignified burial with a stone over its grave in the backyard of a member of Team Duck.

And we suffered the loss of a member of Team Duck: Richard Cook, who died of pancreatic cancer on August 31. He and his wife Karen were instrumental in helping tend the ducks for several years, and it’s not the same without him.

But, looking on the bright side, many people found solace at the pond and watching its attendant wildlife, including, of course, mallards and turtles.  In the last several weeks I’ve met two first-year undergraduates who came here specifically because of Botany Pond, one of them writing her admissions essay on the Pond. The other first-year has now joined Team Duck and has a remarkable way with ducks, so much so that we call her the “Duck Whisperer.”

Sadly, the Management (i.e., Facilities) are going to drain the pond any day now and then dredge it, removing debris as well as patching up cracks in the cement on the side that allow leakage underground. This means that we will not have duck season next year, since this treatment will likely take up a year. (To be honest, the Pond does need a do-over.)  And since the pond will be dredged, we are desperate to ensure that the turtles, who will soon be hibernating in the mud, will be saved—and perhaps returned somehow in the fall of 2023 or spring of 2024.

Here are a few photos of the waning days of duck season and the present incarnation of the Pond.

Two of the three members of the diminished Team Duck: the Duck Whisperer is in the foreground. They are feeding some of the 4-20 ducks that come daily (we have no idea where they go when they leave), but many return every day. But Honey has been here constantly for several weeks, but I was told that she wasn’t there yesterday. 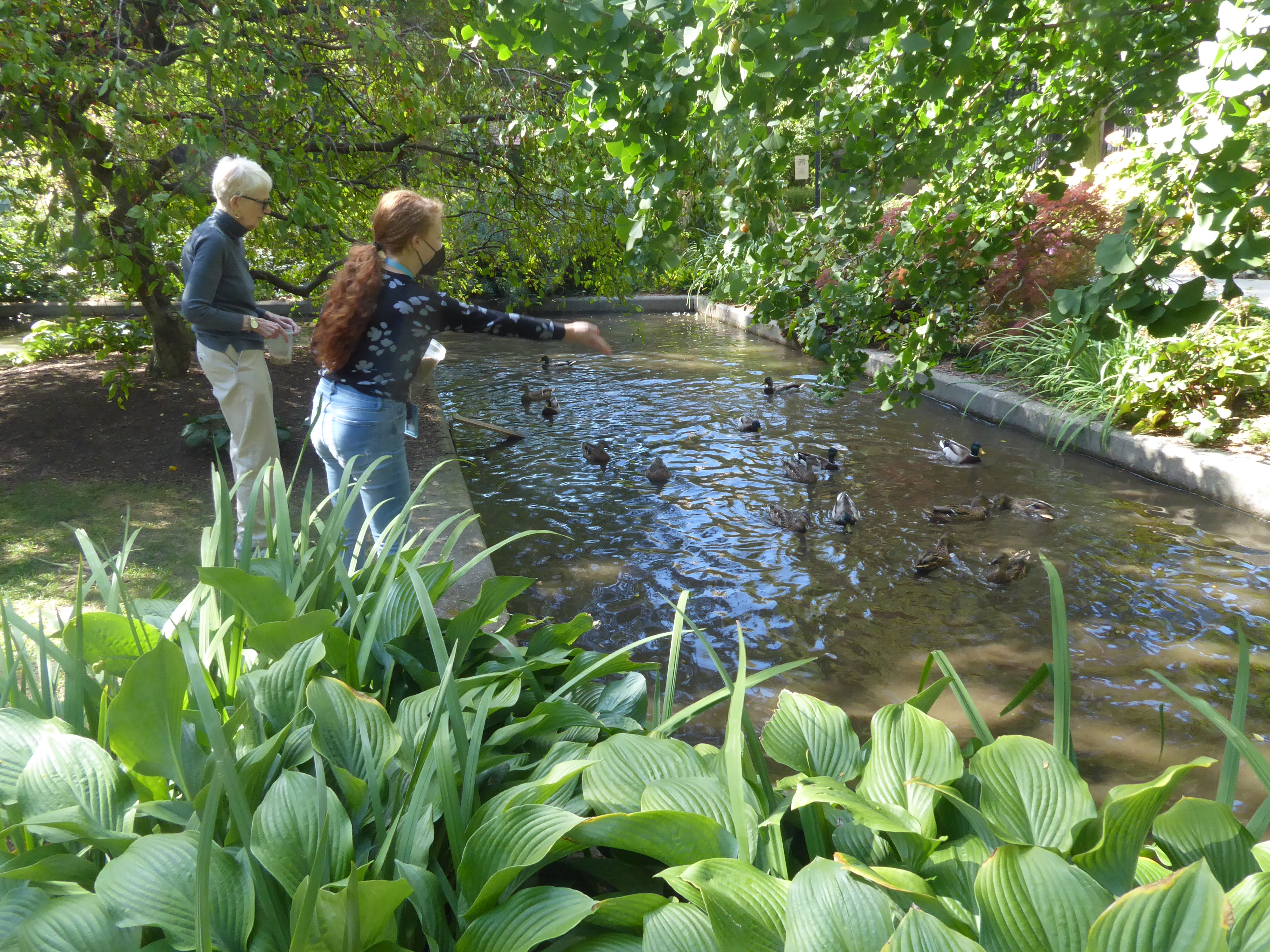 Below: One of the few ducks that has become tame enough to eat from our hand. This one is Billie, a hen with a somewhat misshapen bill that she can’t close completely. This makes her a bit less able to pick up duck pellets but in general she does fine. We of course give extra attention to injured or “off” ducks like Billie. 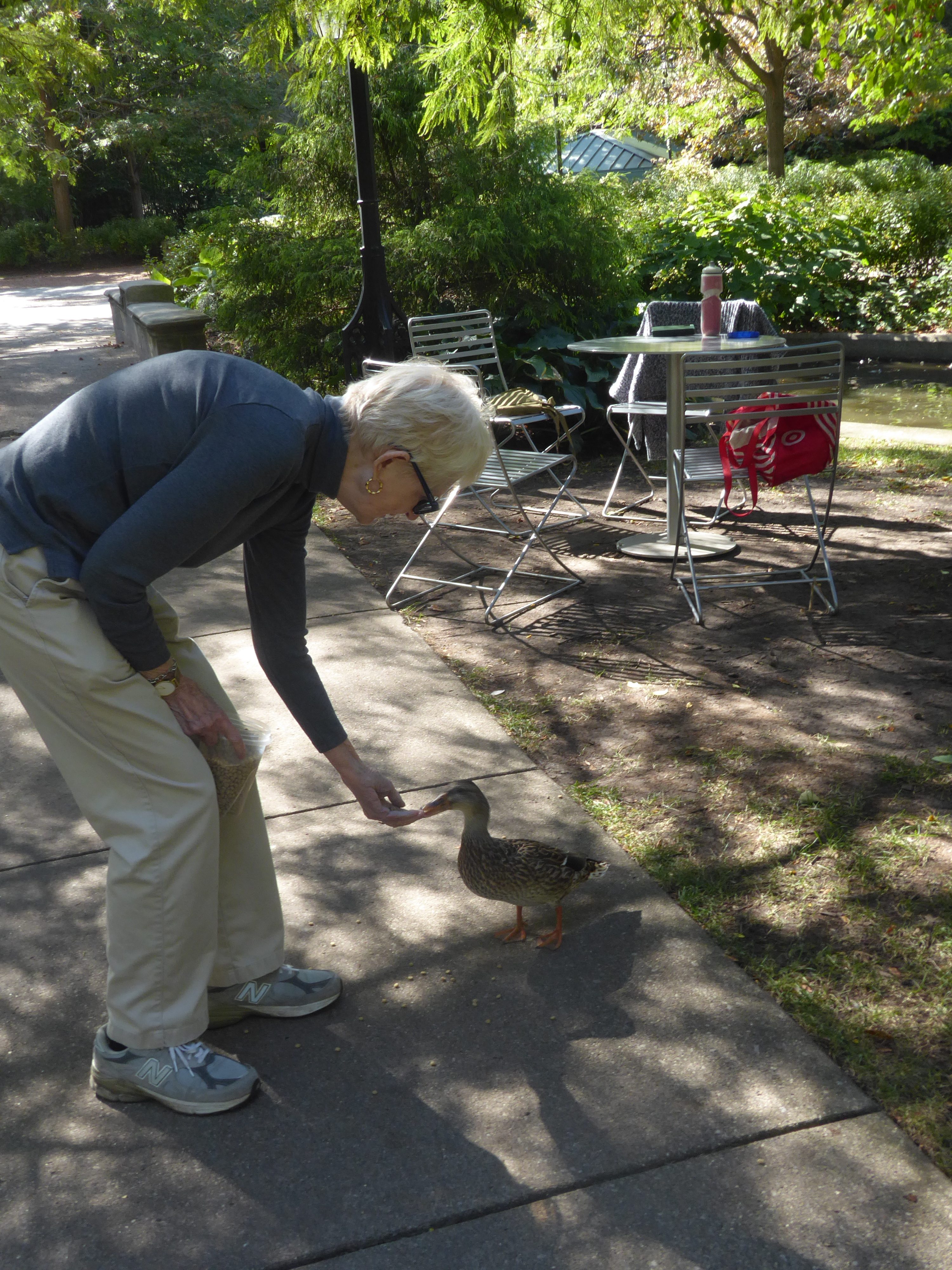 Another injured hen was Gigi, who came to the pond with a serious leg injury, so bad that she couldn’t walk, and was clearly in pain. (She was truly a Lame Duck.) We found her floating in the pond with her tail in the water and head resting on the surface–she looked almost dead. We singled her out for special food and attention, and, over the last month or so, she’s recovered almost completely: she can run, walk, flies like a champ, and the swelling on her leg (a calcified knot, I think) is almost gone. This makes me very happy.

When it got colder, the turtles took every advantage of the sunshine by climbing on the rocks and extending their necks and limbs to get as warm as they could. We call this Turtle Yoga. Three examples: 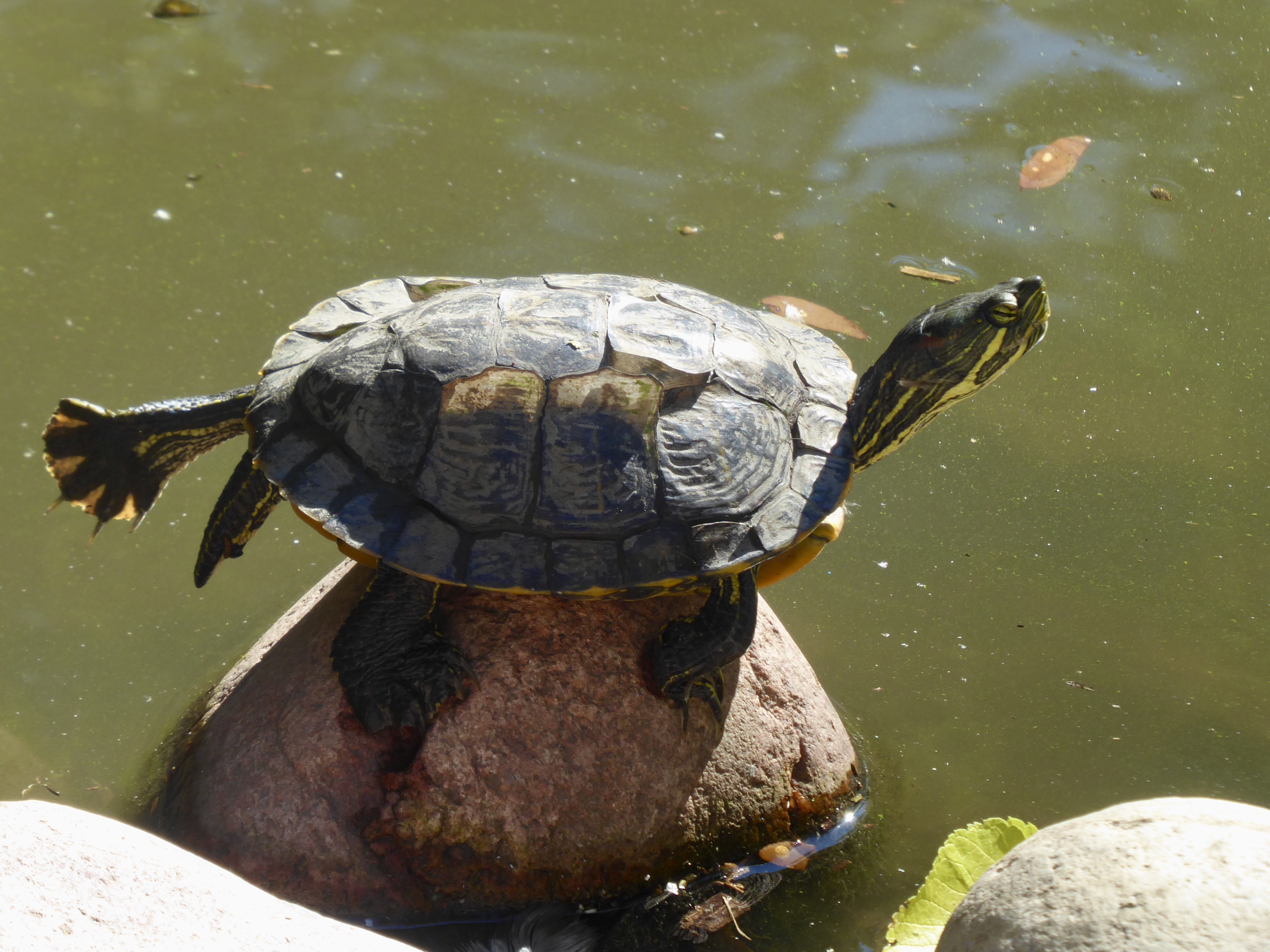 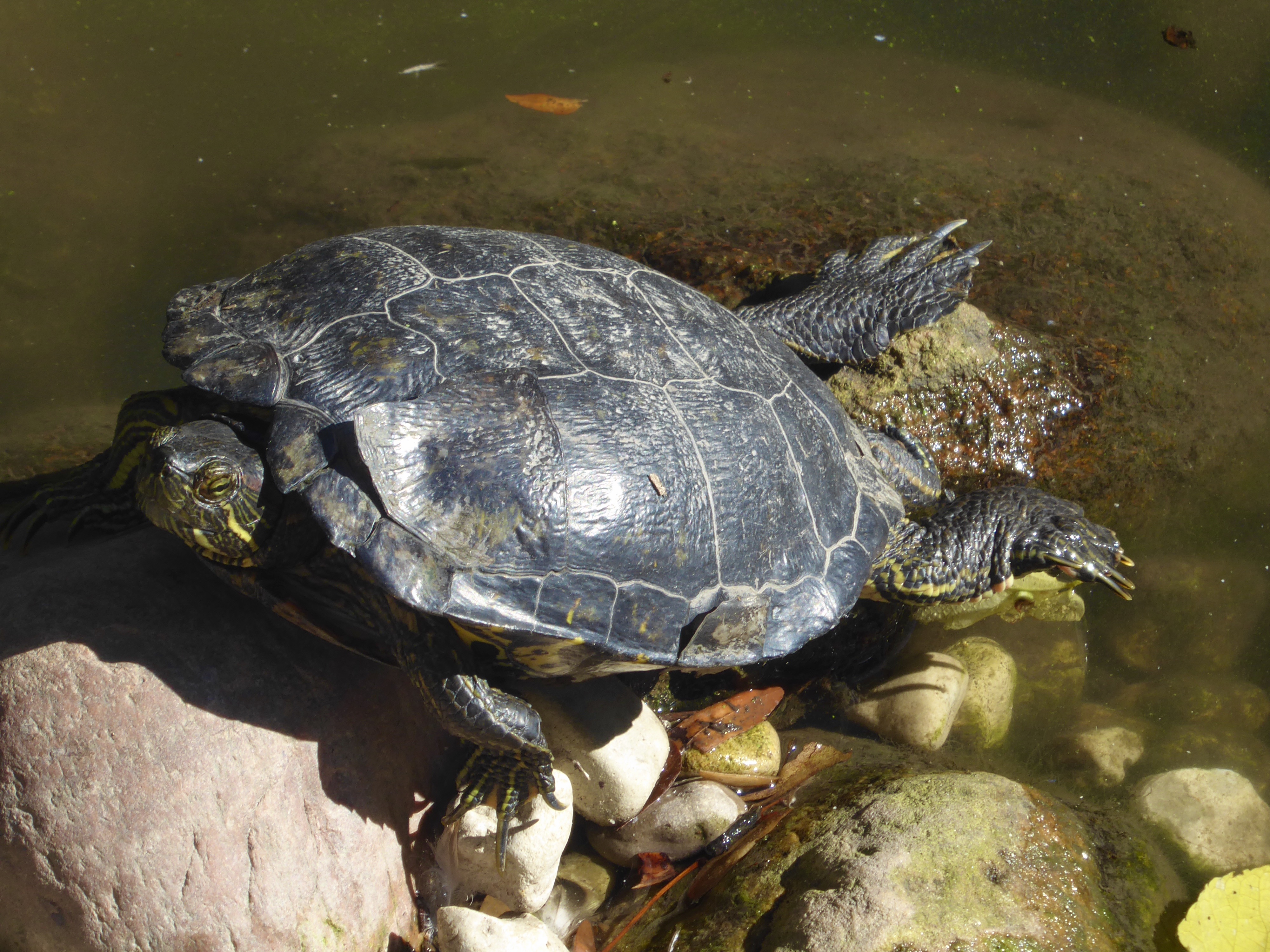 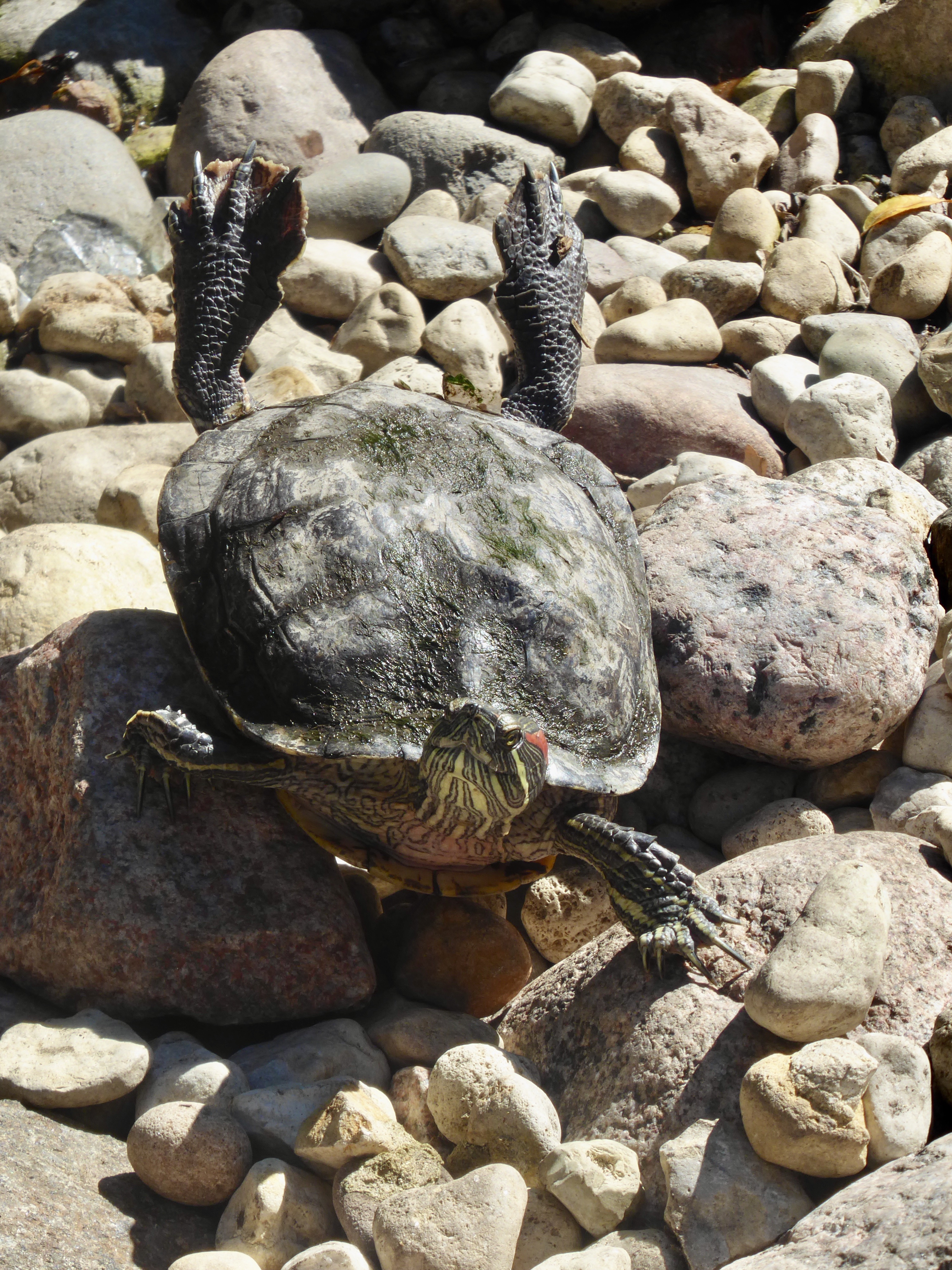 And so it’s farewell to Duck Season, and to the pond and ducks we all love. They will be back—probably in the Spring of 2024—but will Honey be among the mallards? She’s been here six years in a row and I am keen to see her again. Wild mallards don’t live forever (the average is 5-10 years, and she’s already at least seven. 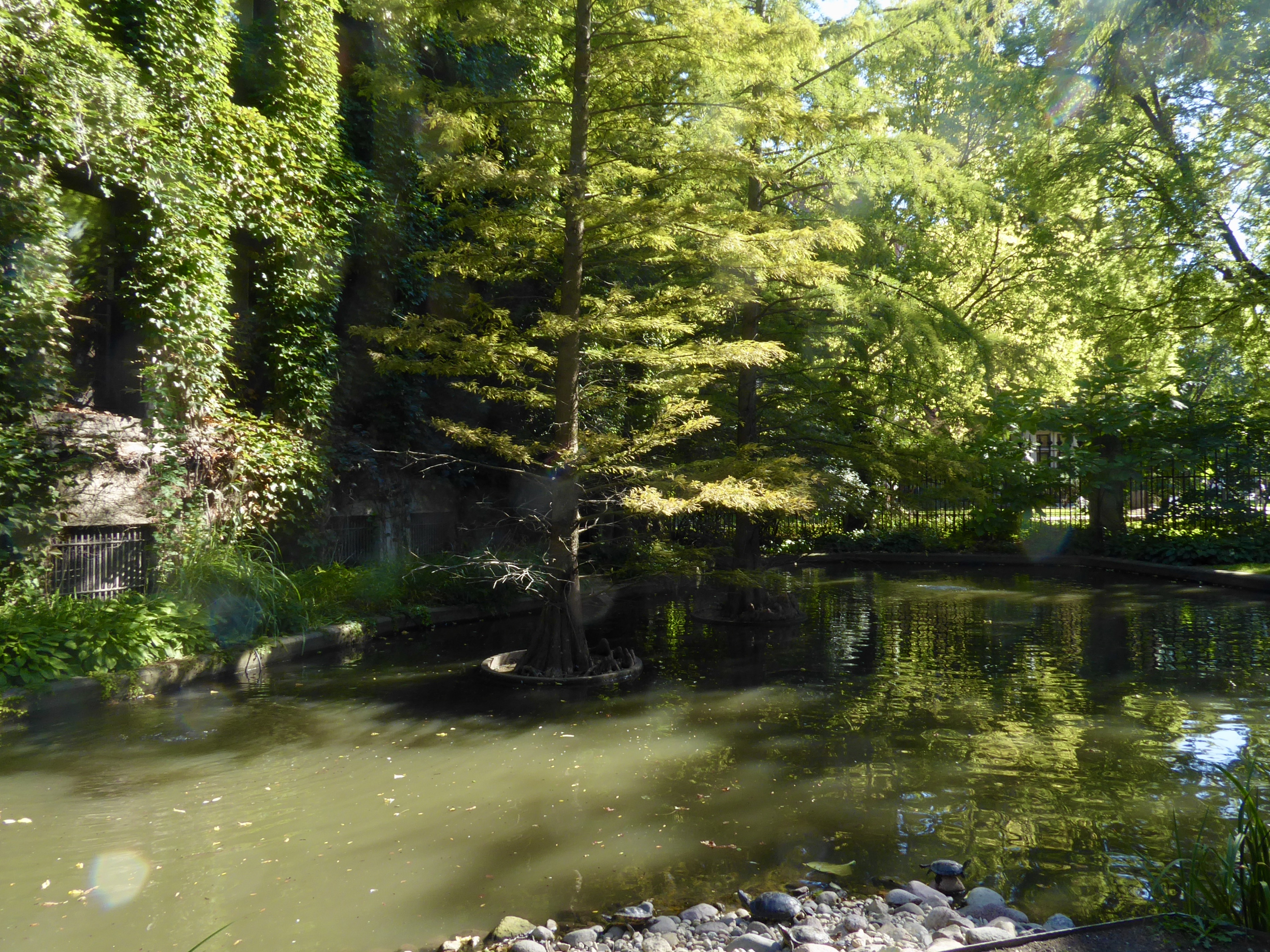 I’m told that the Pond is still intact, and they haven’t yet fenced it off.  In my absence, Team Duck is looking after the mallards who remain and (we hope) will soon be flying south.

They have disabled the “On Botany Pond” live feed, I suppose for the renovation, so you won’t be able to watch the place online.

17 thoughts on “End of the season at Botany Pond”