Team Duck and I are deeply saddened by the recent death of one of our members, Dr. Richard Cook, who passed away from pancreatic cancer on August 31. He was only 69.  An anesthesiologist by training, he was also a polymath, something I discovered only after he died. Richard’s many talents are highlighted in one of the articles below; I did not know of these, for we Team members rarely talk about their work while on duty at Botany Pond. Usually we feed the ducks and then gather on the bridge or at a nearby table for a while, soaking in the beauty of the pond, chatting about this and that, and, of course, discussing the ducks and the vagaries of their behavior.

Richard and his wife Karen were on the team for two years, faithfully appearing every day two summers ago at 6:30 a.m. to do the morning feeding of Honey and Dorothy’s ducklings, and coming regularly after that.  Beyond the quotidian tasks of tending ducks, which require diligence and commitment, Richard had two special talents. One was to design various contrivances to assure the safe arrival of ducklings at the pond (cushions, covered holes, padding on spikes, and so on). He and Karen spent a long time preparing for the arrival of one brood of ducks this year (as well as Dorothy’s last year). Unfortunately, this year’s nest, under my air conditioner, never produced offspring, as the mother abandoned her nest after all the preparations. I am leaving up these preparations as Richard’s legacy to Team Duck.

Richard was also superb at calming me down during the many moments of anxiety I had as Duckmeister over the last couple of seasons. Perhaps it was his “bedside manner” acquired during his years as an M.D., but whatever it was, he helped me immensely to put things in perspective—to accept the things that I could not change, and to suggest how to proceed with the things I could change. He was a soft-spoken and gentle man, and though he was surely suffering from the disease during much of the time I knew him, we didn’t learn how ill he was until just a few months ago. Pancreatic cancer is a cruel ailment, and I could never have borne it with the fortitude he did.

Karen sent us the sad news, but added a summary of Richard’s life, work, and persona that I reproduce below; it was put together by his friends:

I have asked Richard’s closest professional friends to capture the arc of his career and highlight a few of his major accomplishments in the next couple of paragraphs. But because his career was both long, storied and highly influential, they have also put together a longer summary of his professional impact on many fields available at the following link: https://www.adaptivecapacitylabs.com/blog/2022/09/12/richard–cook-a-life-in-many-acts

What stands out, professionally, about Richard is how he dedicated himself to the health and safety of others in the many ‘acts’ of his career.

It is rare for people to have second, third or even fourth acts in their careers (some concurrently). He was foremost a caring physician and anesthesiologist dedicated to his patients well being (for 25 years at the Ohio State University (OSU) and University of Chicago Medical Centers). For example, after the massive Haiti earthquake of 2010, Richard helped lead a University of Chicago-sponsored medical mission to set up a field hospital caring for the injured and destitute.

But, both at the beginning and at the end of his career, he worked on computing challenges as a software engineer (after college at Control Data Corp.; after ending clinical practice, co-founding a successful software engineering company, Adaptive Capacity Labs).

Alongside these careers, he was a researcher for 35 years – at OSU, University of Chicago, KTH Royal Institute of Technology (Sweden), and OSU again. From the beginning he pursued new paths in Human Factors, in Human-Computer/Automation Interaction, and in Resilient Performance in complex systems, and then helped young researchers expand the new directions. His ideas and innovations arose from his commitment to learning from incidents – close observation of actual work, not work as imagined from afar. As a result, he made lasting contributions to the fields of Cognitive Systems Engineering (designing joint systems of people and computers in high performance, high risk settings) and Resilience Engineering (how people provide a unique and critical form of adaptive capacity to make complex systems work). His publications and recorded talks in these areas are a gold mine for young researchers (google “How Complex Systems Fail”).

As a patient safety advocate, he used his science and engineering expertise to contribute to the start of the patient safety movement (he was a founding board member of the National Patient Safety Foundation in 1996 and co-founded the GAPS Center in 2000 to conduct a major patient safety campaign in the VA of Ohio). He was unafraid to speak out whenever the movement veered off-course from the science.

Through all of the varied acts of his career, he looked closer, thought harder, saw deeper, and envisioned new directions. As one colleague said, “Richard is a genius troublemaker.” Then he patiently shared his wisdom with varied emerging talents he encountered across the diverse ‘acts’ of a storied life.

Richard leaves his wife, Karen, three children, Cliff, Kristin, and Kara Schwandner and their spouses, his father, Richard G. Cook, his siblings, Sue and Paul Cook and six grandchildren. He is remembered as an extraordinary person, both funny and generous with his time, an incomparable doctor and a wonderful husband, father and grandfather. He was a lovely man in every sense.

It is only now, as I said, that I’m learning what a polymath the man was. We will miss him, as will our feathered charges at the pond.  Here are Richard and Karen photographed on the bridge on November 10 of last year, at the tail end of duck season: 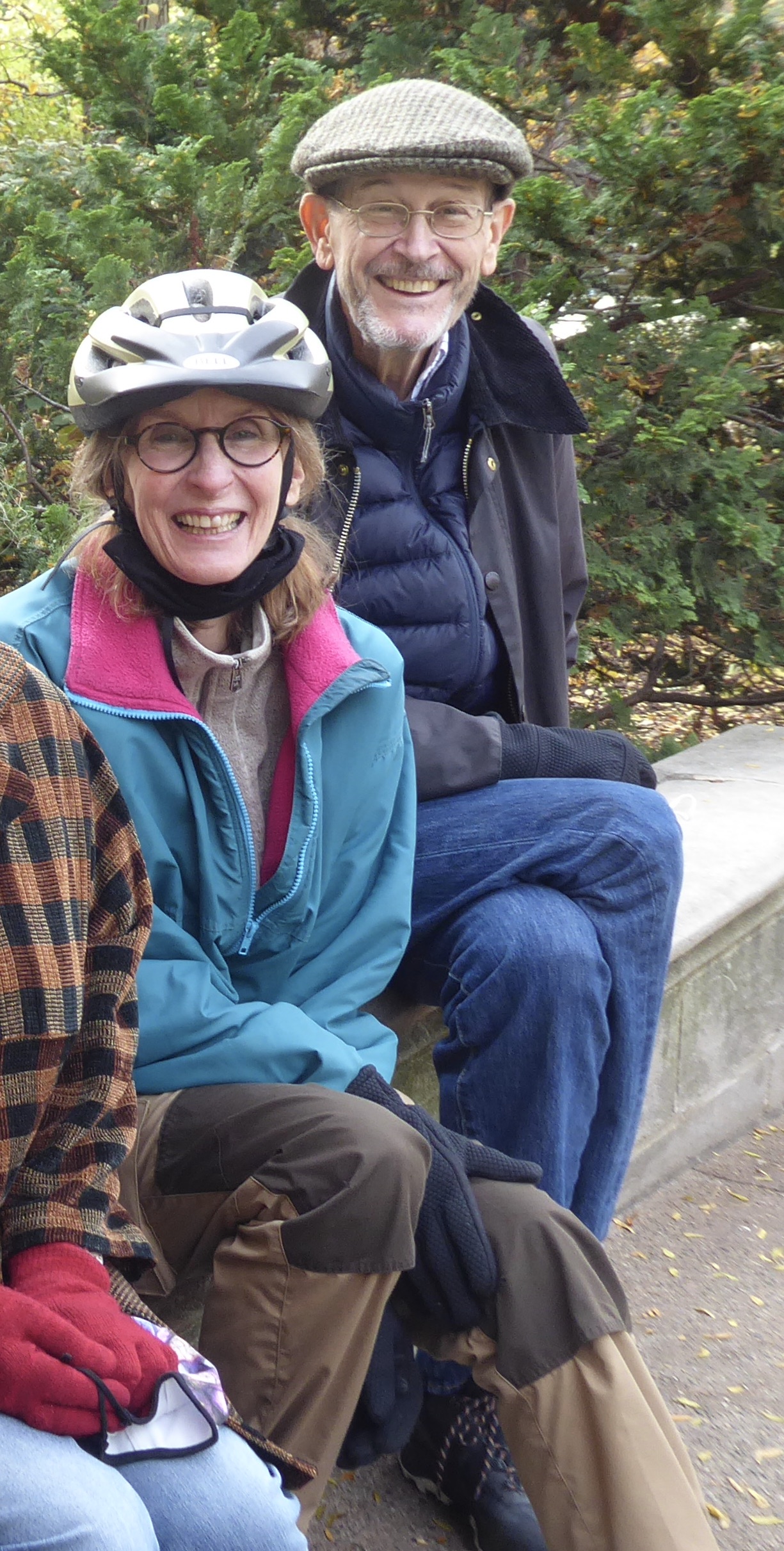 And here’s the memoriam to Richard assembled by three of his colleagues; click on the screenshot to read it. 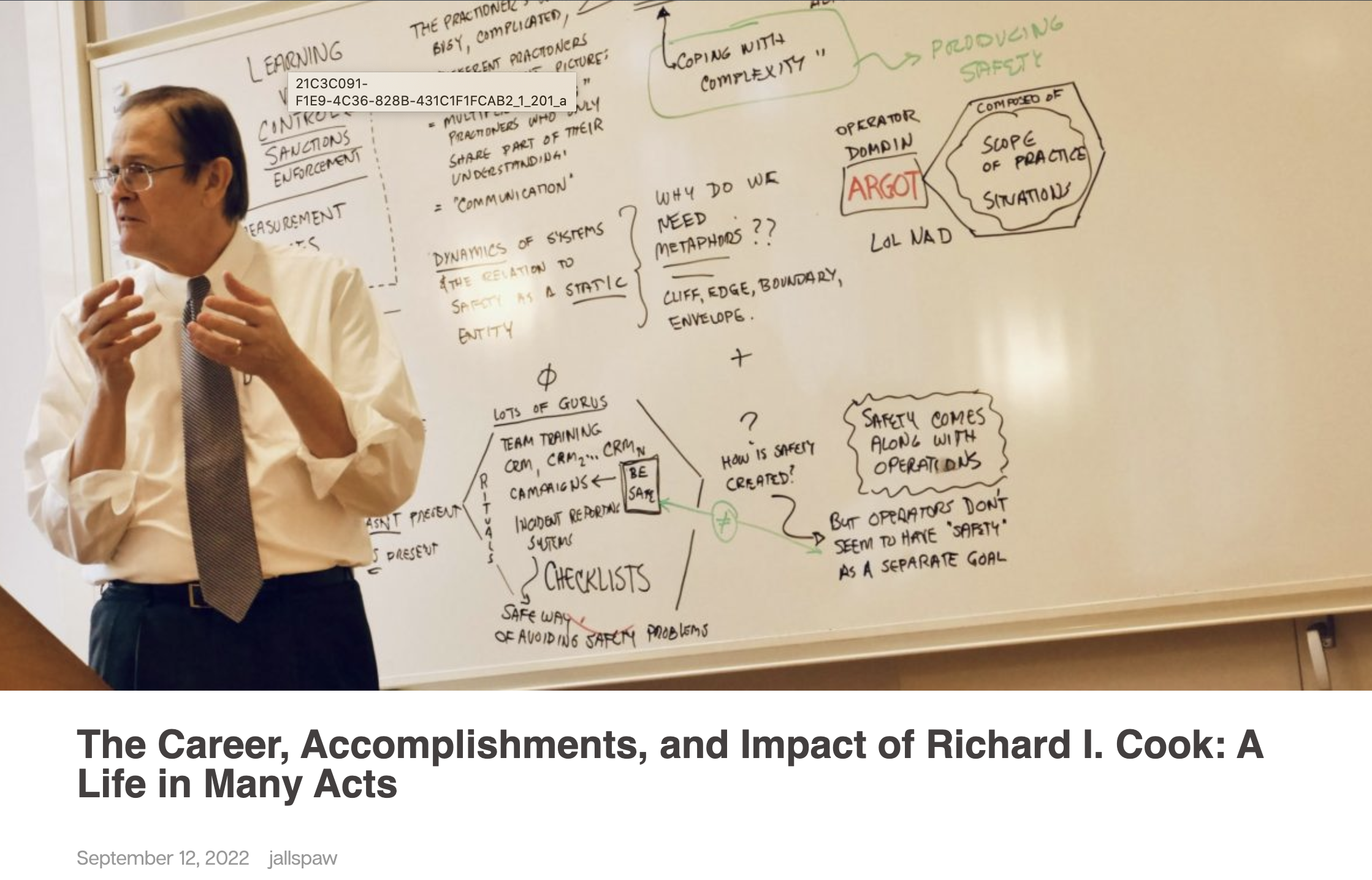 Like our ducks in the fall, he left us suddenly and unexpectedly, and we won’t see his like again. We join his friends and family in remembering him and being grateful for the time we had in his company.