This morning Matthew sent me a tweet by “The Dialectical Biologist” (TDB), which astounded me. I don’t know who TDB is, but he/she identifies as “Biologist. Anti-hereditarian. Lewontin fan.” The anti-hereditarian bit explains some of the criticality in the tweet below, and it’s worth noting that Lewontin himself gave The Selfish Gene a very critical review in Nature in 1977 (free with the legal Unpaywall app).

Here’s the tweet (the second part is the important claim), and two of the six subsequent tweets explaining why TDB sees The Selfish Gene as “the most damaging popular science book of all time.” 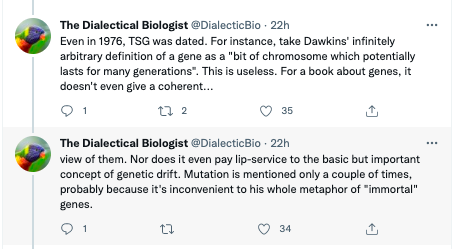 I was, of course, Dick Lewontin’s Ph.D. student, and I loved and admired the man. But I have to add that his Marxist politics, which included views of an almost infinite malleability of human behavior, did affect his science, and I think his review of Dawkins’s book is marred by that ideology. If you read Dick’s review, you’ll see that, like TDB above, Lewontin objects to the lack of discussion of genetic drift, and to Dawkins’s supposed claim (one that he didn’t actually make) that every aspect of every organism was installed by natural selection, accompanied by  untestable “adaptive stories” about how it arose. (Lewontin calls this “vulgar Darwinism”.)

In short, Lewontin’s review was an abridged version of his paper with Steve Gould, “The Spandrels of San Marco and the Panglossian paradigm: A  critique of the adaptationist program.” That paper was valuable in correcting the excesses of hyperselectionism, pointing out other reasons besides selection for the appearance of organismal traits and behaviors, and implicitly demanding data instead of fanciful stories for natural-selection explanations. (There are many traits, however, like extreme mimicry, where there is no plausible explanation beyond natural selection on bits of DNA.)

It is misguided to fault Dawkins’s book for not dealing in extenso with genetic drift or the San Marco alternatives. The Selfish Gene is essentially a book about how natural selection really works. It’s not important that it doesn’t define “gene” in the way that TDB wants; in fact, biologists haven’t yet settled on a definition of gene! It’s sufficient, when regarding the phenomenon of natural selection, to define a gene as “a bit of DNA that affects the properties of an organism”. If those properties enhance the reproduction of the carrier (the “vehicle”), then the gene gets overrepresented in the next generation compared to the alternative gene forms (“alleles”). These selected bits of DNA act as if they were selfish, “wanting” to dominate the gene pool. That is a very good metaphor, but one that has been widely misunderstood by people who should be thinking more clearly.

The value in the book lies in its clear explanation of how natural selection acts largely (but not entirely) at the level of the gene, not the organism, the group, the population, or the species; its distinction between “replicators” (bits of DNA subject to natural selection) and “vehicles” (the carriers of replicators whose reproductive output can be affected by those replicators); that “kin selection” is, in essence, nothing really different from natural selection acting on the genes of an individual; and that, contrary to a naive “selfish gene” view, altruism can result from natural selection. Finally, it explains clearly the thesis (earlier adumbrated by G. C. Williams) that “group selection—selection on populations—is not a major source of adaptation in nature. (See Steve Pinker’s wonderful essay on the inefficacy of group selection published ten years ago in Edge.)

The Selfish Gene is the clearest explanation I know of how natural selection works, as well as an exposition of ideas like kin selection that were fairly new at the time of the book’s publication.  It also introduces the idea of “memes”, which I think is a distraction that has led almost nowhere in the understanding of culture, but that is just a throwaway notion at the end of the book. (You can see my critique of the meme framework in a review of Susan Blackmore’s book The Meme Machine that I wrote for Nature; access is free.)

Think of the book as an explanation for the layperson about how natural selection really works, and you’ll recognize its value. As far as “damaging” the popular understanding of science, that is a grossly misguided accusation. By explicating how natural selection really works, explaining some of its variants (like kin selection), and dismissing widespread but largely erroneous ideas about selection on groups, The Selfish Gene did the public an enormous service. While popularity is not always an index of a science book’s quality, in this case it is: many laypeople have written about how they finally understood natural selection after reading it.

I could, in fact, argue that the San Marco paper by Gould and Lewontin was damaging, too, by overly restricting the domain of natural selection and failing to adduce cases where drift or pleiotropy were not sufficient explanations for traits (mimicry is one), so that natural selection was the most parsimonious explanation. (In the latter part of his career, it was hard to get Steve Gould to even admit that selection was important, much less ubiquitous). But “San Marco” was itself valuable in dampening hyper-Darwinism, and in the main was a good contribution to  evolutionary biology. The Selfish Gene was, however, a much better contribution

I asked Matthew, someone who of course knows the ins and outs of evolutionary genetics, if he agreed with TDB’s negative assessment of The Selfish Gene. His reply:

Given I am giving a lecture tomorrow in which I tell 600 students they should all read it, I think not…

When I asked permission to reproduce his quote above, he said “sure” and also me the slide he’s showing his 600 students: 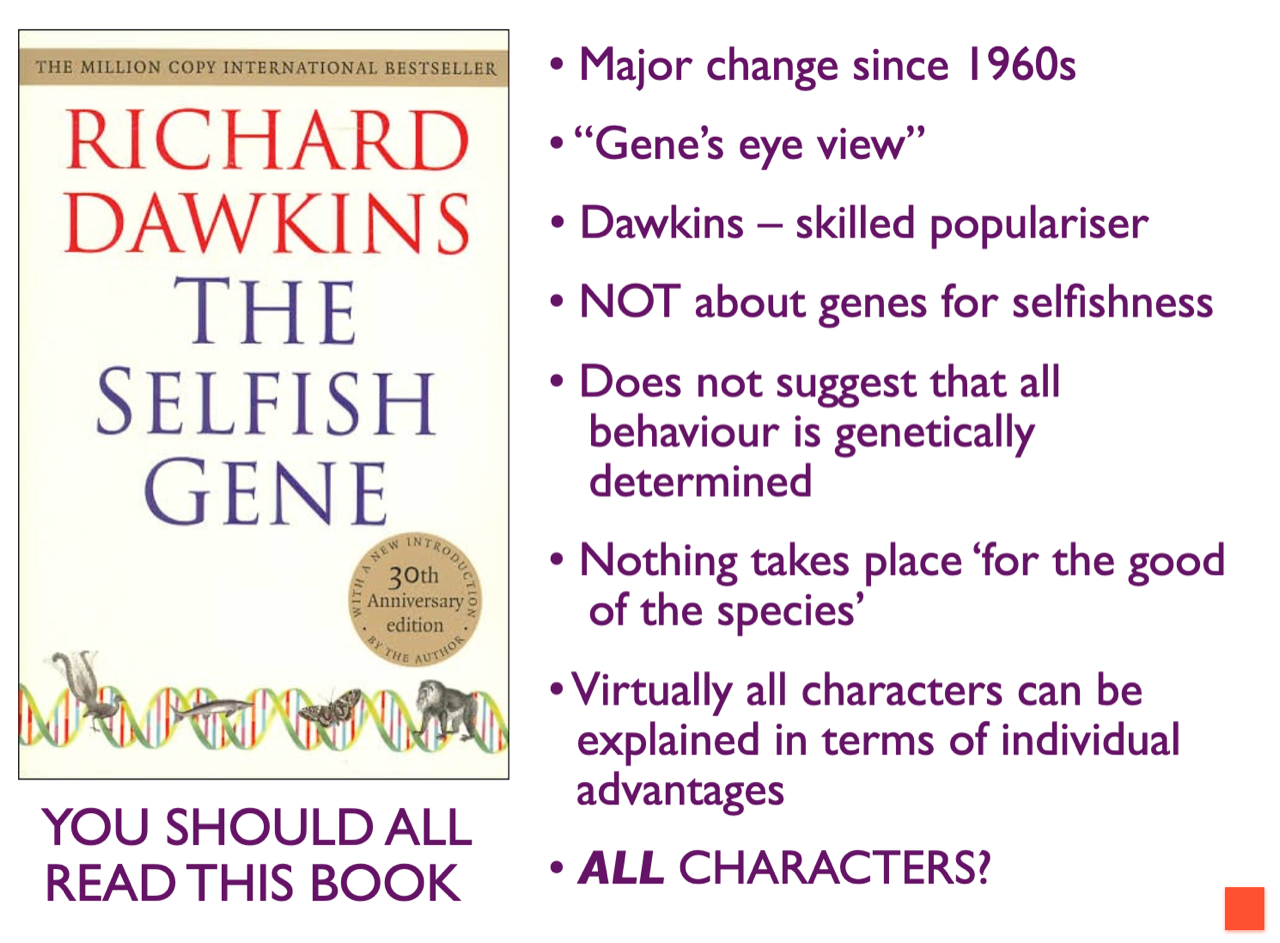 FWIW I also show them three views in the levels/units of selection debate (a philosopher who says it has to be genes as they are the only things that are passed down, Dick who says we can’t really know and Hamilton who says it’s complicated and it depends what you look at).
The next section of the lecture deals with social behaviour (hence the final line)

I invite those readers who have read The Selfish Gene to weigh in below with their opinion.

66 thoughts on “Did The Selfish Gene damage public understanding of biology?”