I may be debilitated, but the Caturday felids will persist!

This article comes from a site call Aish, which aims to “create a culture of Jewish learning, with three million Jews around the globe learning, incorporating, and sharing timeless Jewish wisdom and values.” Today’s “timeless Jewish values” involve cats: 8 “Jewish facts” about them. Click to read; any quotes are indented:

Here are the facts; each is accompanied by an explanation in the article:

1.) Cats were worshipped in ancient Egypt.  Yes, but what does that have with Jews?

The Talmud describes cats living in Jewish homes in ancient times. They were particularly prized for their ability to hunt snakes and keep residents safe. The Jewish sage Rav Pappa was thought to have counseled against entering houses that had no cats in them at night, lest one step on a snake accidentally (Talmud Pesachim 112b:10).

3.) You can learn modesty from a cat.

Every cat owner knows how neat and fastidious our feline friends can be.  Their  neat qualities were  recognized by the great sage Rabbi Yohanan who noted that we can learn many good traits from animals. He counseled that “Even if the Torah had not been given, we would nonetheless have learned modesty from the cat…” (Talmud Eruvin 11b:29). Something to think about the next time you watch your cat obsessively clean itself and its litter box.

4.) Caring for pets and feeding them first.

. . . Jewish law states you must feed your pet before feeding yourself (Talmud Gittin 62,Berachot 40a).  Rabbi Moshe Feinstein (1895-1986) advised us to develop an extra sensitivity when it comes to our pets, and suggested that we not so much as taste a bite of food before making sure that our animals are fed.

5.) Cats inspire us as fierce hunters.

. . . When it comes to cats, King David singled out their magnificent hunting abilities.  A cat sings, “I pursued my foes and overtook them, and did not return until they were destroyed” (Psalms 18:38).  It’s a stirring image, using the instantly recognizable instance of a cat stalking its prey to inspire us to similar bravery in battle.

According to the Rabbi Eliyahu Dessler (1892-1953), many of us think about love all wrong. Love doesn’t lead to giving. It’s the opposite: by giving, we come to love.

Ergo, take care of your moggy satisfied the human need to connect and love. (This is Jewish wisdom?)

Today, Israel is home to over 2 million cats, many of them living wild in cities and towns.  Israel’s warm climate, combined with the generosity of many Israelis who often feed street cats, has allowed the cat population to burgeon.

That may not be a good thing, though!  Finally,

8.) Israelis have developed innovations in cat care.  For example:

Well, so be it. You can find anything in the Talmud, including stuff about cats. But you have to hand it to the Jews, for in Christian scriptures, including the new Testament, there is nothing about cats. Only d*gs.  Muslims also love cats; read the Wikipedia article “Islam and cats,” which begins:

The domestic cat is a revered animal in Islam. Admired for their cleanliness, cats are considered “the quintessential pet” by Muslims.

From How Stuff Works, a spy cat (click to read): 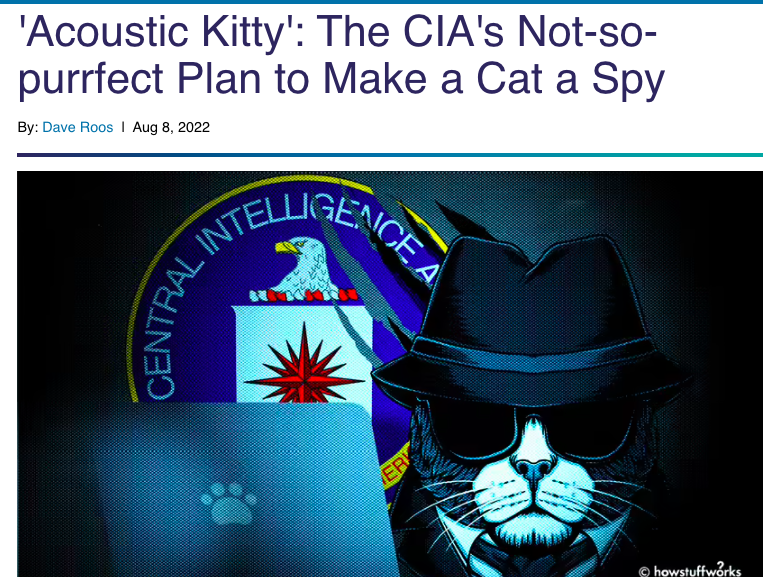 They tried to make cats into acoustic spies! The details:

The Cold War made people do crazy things. The United States government was so desperate to defeat communism that it threw money at any half-baked scheme that would give Americans an advantage over the Soviet menace.

Exhibit A: “Project Acoustic Kitty,” a top-secret CIA research program that tested whether housecats could be used to spy on Soviet operatives. If that sounds like the plot of a bad movie from 1966, it was (with a dog instead of a cat). But it was also a real thing and we have the heavily redacted CIA documents to prove it.

. . .The CIA’s Office of Technical Research and Office of Research and Development spent five years and an estimated $20 million on “Project Acoustic Kitty,” according to Mental Floss. The high price tag came from the high degree of technical difficulty. In an era before microchips and digital devices, the CIA scientists had to figure out how to discreetly equip a cat with a microphone, antenna, transmitter and battery.

In the end, a 3/4-inch (2-centimeter) transmitter was implanted at the base of the cat’s skull, a microphone was stitched into its ear canal, and an antenna was woven into the fur of the cat’s tail.

The cats were supposed to be released and then eavesdrop. Needless to say, the project failed. And the kitties were mutilated:

“A lot of money was spent. They slit the cat open, put batteries in him, wired him up. The tail was used as an antenna. They made a monstrosity.”

Informant Michael says this about the video of a motorcycle-riding kitty, who also has an instagram page.

The video is from 2016. The only fakery here is it’s probably a borrowed Harley, usually it’s a piece of Japcrap. The fatso marmalade is Gato Chiquinho AKA the Brazilian Garfield – a resident of the Favela da Rocinha, in Rio de Janeiro along with his hooman Alexandre Goulart. He has a Youtube page & the last video was a year ago.

The cat biker jacket secures him to the petrol tank & there’s a collar around his neck that similarly attaches him – I think the cat adopts that stance on the tank because he has no choice.

********
Lagniappe: There’s  new Netflix documentary on cats, sent by Malcolm. The show’s website is here, and you can watch a trailer. Several readers emailed me that it’s an excellent show. Click to go to the site and watch a trailer. 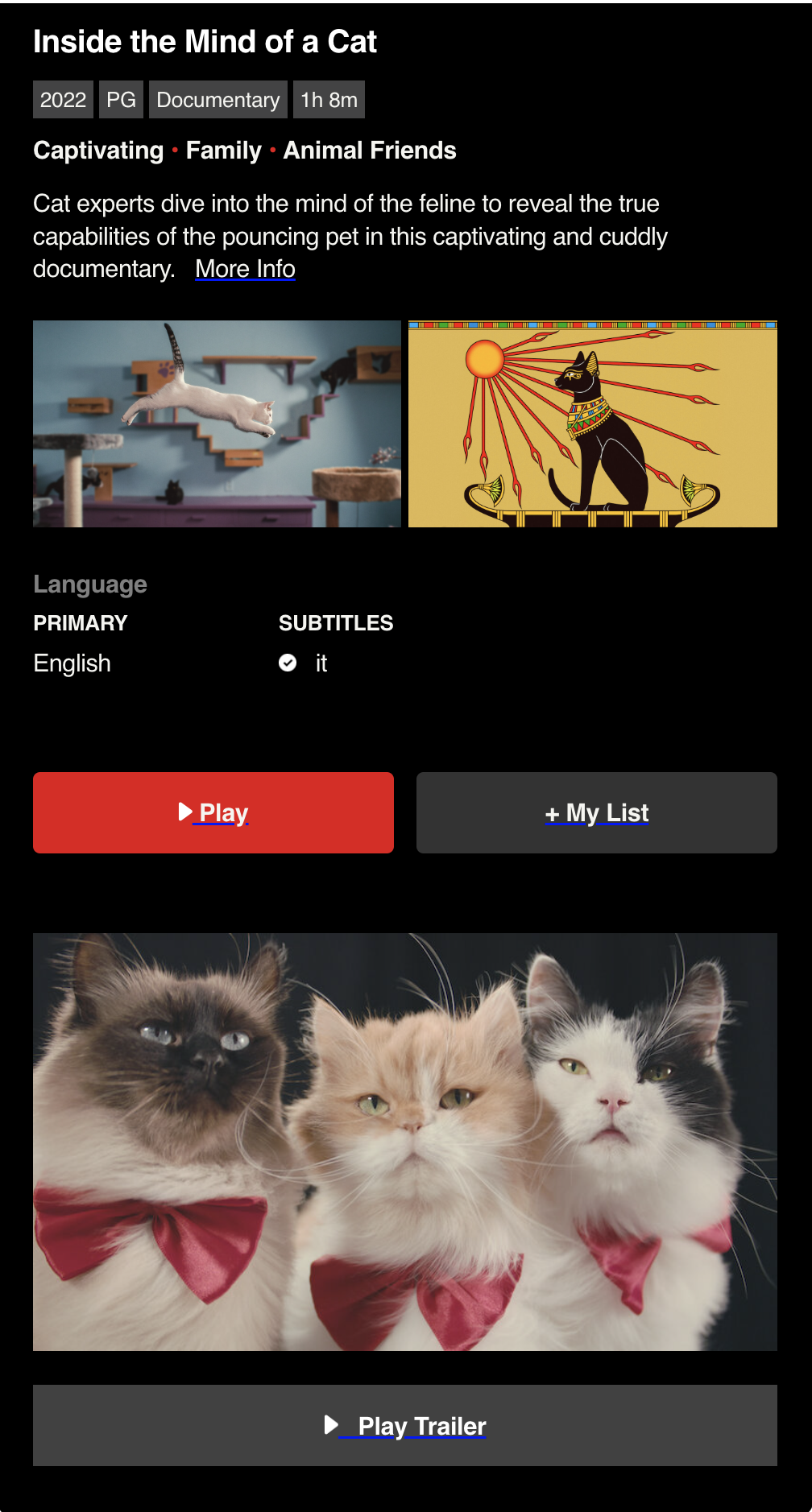