You can argue about whether the purview of the National Science Foundation (NSF) should include investigating whether American science and science education are “systemically racist” in addition to doing what the NSF normally does—funding science itself.  I won’t argue that, since I think that the NSF does fund sociology, and I suppose science is as good a field for sociological investigation as any other.

But I will argue—and what I discuss hre—is that the NSF isn’t calling for investigations of whether systemic racism is an important impediment to education and professional advancement in STEM. No, the NSF assumes that this is true, and then throws money at investigators to figure out how to remedy a problem that hasn’t yet been demonstrated.

In other words, the NSF claims to already know that not only is systemic racism real and prevalent in STEM, but is also the overweening cause of the inequities in representation.

This is question-begging in the authentic sense—assuming what you want to demonstrate. And I take “systemic racism in STEM” to mean the presence of ingrained features in STEM that cause discrimination against people (it could be any group, but they’re talking about racial discrimination). “Systemic racism” does not mean that “STEM has bigots”—all fields, do, of course—but rather that education in science, math, engineering, and technology have built-in features that discriminate against minorities and women. And that’s why those groups are underrepresented in STEM studies and among STEM academics.

Many NSF-funded scientists were sent a link to a new program solicitation for “racial equity in STEM” education, which has a pot of money between $15 million and $25 million. The goal is to show how systemic racism impedes STEM education and then how to overcome these impediments. The program assumes there’s systemic racism in science and science education, something that many scientists would contest, especially in view of the eagerness of many science departments to recruit minority students and faculty, sometimes giving them advantages over non-minorities. (Not long ago the National Institutes of Health started a program that gave minorities preferential access to grant money, but then quickly dismantled it when I think they realized it was illegal.)

Before I show you this question-begging, let me add that the goal—to give historically disadvantaged minorities a leg up in education—is admirable. But before you do that, you have to figure out exactly how the disadvantages act to reduce STEM participation. And, as I note just below, “systemic racism” is one of just several potential causes for underachievement.  Especially for a science organization, you cannot assume that systemic racism is THE cause. That has to be demonstrated, not assumed. But the NSF assumes and doesn’t demonstrate.

At any rate, here’s the proposal, sent by a colleague who was surprised that an organization that gives money for scientific research assumes from the outset that “systemic racism” is ingrained in STEM, so that there is no need to

a. demonstrate that this is true using an explicit definition of “systemic racism”, and

b. further demonstrate that systemic racism is the cause for inequities of representation of minorities in STEM.  As you know, there are other possible reasons, including “pipeline problems” based on unequal opportunities that start at birth and lead to educational deficits, as well as differences in career preference of different groups.

Click on the screenshot to see the program announcement.

I’ve taken some excerpts. Here is the “Important information” at the beginning of the announcement. I’ve highlighted “systemic racism throughout” so you can see how it’s assumed. Note that three of the four requirements assume systemic racism exists and is important in cause unequal representation.

I presume that “led by or in authentic partnership” means that proposals should have principal investigators that are minorities or at least collaborators. While you can’t investigate racism without studying minorities, this may be code for saying “we will favor proposals by minority Principal Investigators.” But they can’t say that outright because it’s illegal, just as it was with the NIH.

The NSF Strategic Plan focuses on ensuring that U.S. research is an inclusive enterprise that benefits from the talent of all sectors of American society – a research enterprise that incorporates the rich demographic and geographic diversity of the nation. The strategic plan recognizes that the more people who engage in science, technology, engineering, and mathematics (STEM) research and the more diverse their backgrounds, the richer the range of questions asked. The result is a greater breadth of discovery and more creative solutions

The assumption that inequities are due to systemic racism: 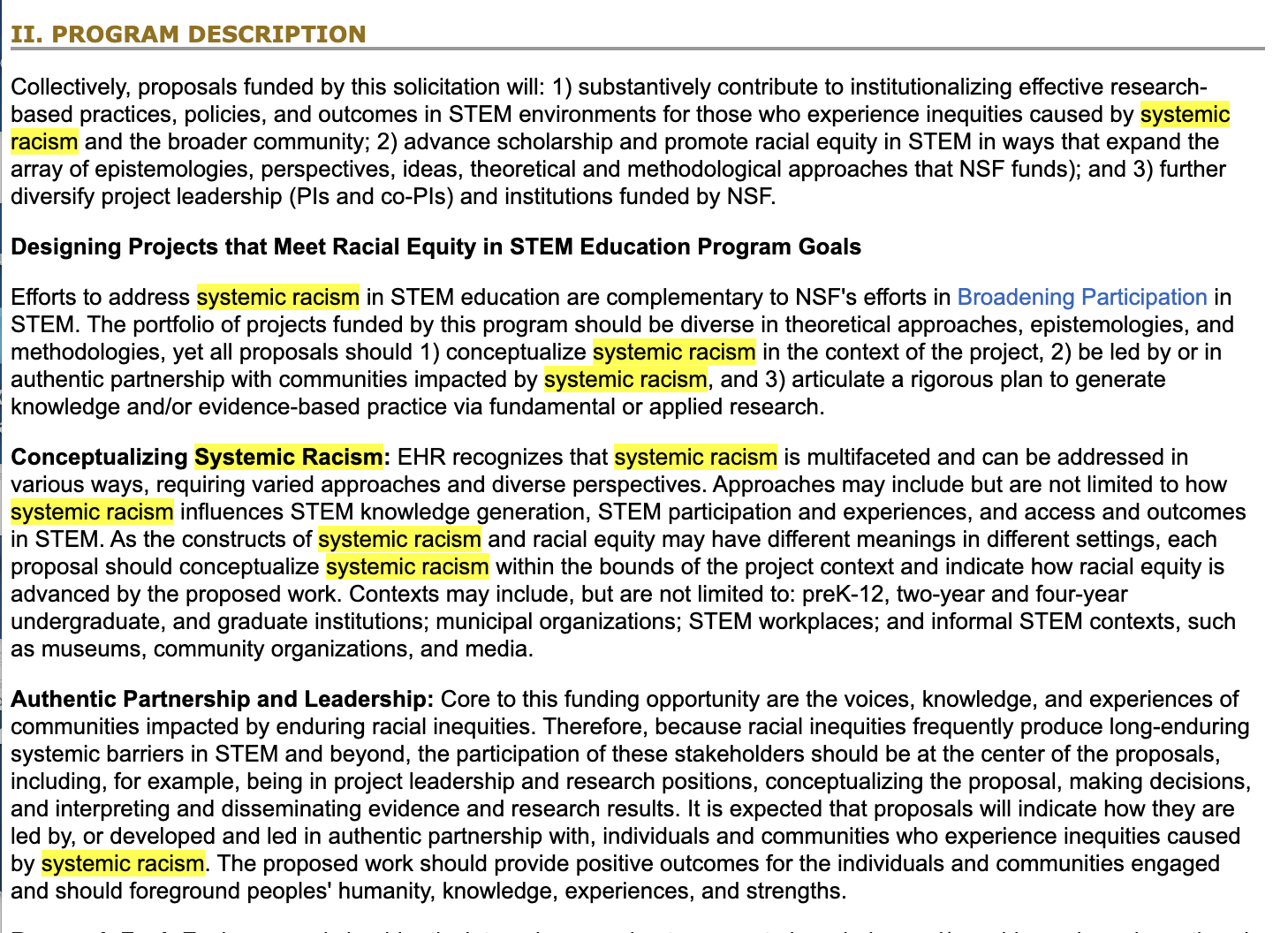 There will be a total of 15-35 awards given, each award can be for up to five years, and you can ask for up to $5 million.

Note the big problem: they explicitly and repeatedly ascribe inequities (unequal representation of racial groups in proportion to their presence in the American population) to systemic racism. This is an assumption, not a fact.  And in truth, you cannot even begin such projects without a demonstration of what role ingrained features—and exactly which ingrained features—of STEM impede education in the sciences. Perhaps the NSF should use that $15-$25 to investigate the contribution of various factors to inequities. But that, of course, is taboo, because progressive doctrine already tells us the answer without any need for empirical investigation. It’s revelation, Jake! Or at least ideology.

14 thoughts on “More ideological bias: the National Science Foundation gives grants for people to document what the NSF already claims to know”