Here’s a group of physicians and therapists writing in the British Medical Journal about the recent dismantling of London’s Tavistock Gender Identity Service (GIDS). infamous for its pervasive emphasis on “affirmative care” . In practice, such care meant rushing teens (or younger kids) with gender dysphoria into accepting that they’re really members of the other sex and then treating them with puberty blockers, hormones, and surgery so they can transition.  But in some cases straight -up affirmation and subsequent action isn’t the best course, as gender dysphoria might be due to, say, feelings of homosexuality rather than transsexuality.  Or depression. (The controversy over affirmative care involves children, adolescents, and teens; it’s not generally directed at adults capable of making their own considered decisions.

A report on Tavistock’s behavior by Dr. Hilary Cass showed how dysfunctional this treatment was, and ultimately led to Tavistock’s function being farmed out to other clinics. Not only that, but “affirmative care” is to be replaced with “thoughtful and empathic care” (my words): a kind of therapy that first picks apart and analyzes gender dysphoria, and avoids an immediate headlong rush into hormones and surgery. Much of Europe is now going this way, especially in light of the absence of long-term data on the effect of puberty blockers.

As the letter below letter indicates, Tavistock is now about to face a bunch of lawsuits from those who regret the transition through which they were rushed. In fact, as The Independent reports, the lawsuits have already begun. Let this be a lesson to American clinicians, who are still far more willing than their European counterparts to embrace “affirmative care.”  Wrecking people’s lives might not bother these doctors and therapists so much, but in America money (aka the lawsuit) talks.

The clinic, which is being shut down by NHS England, was criticised by an independent review for the quality of care and services provided to patients, who were predominantly young teenagers expressing an interest in gender transitioning.

Staff, patients and parents have raised concerns that young people using the service were put on the pathway to transitioning too early and before they had been properly assessed.

It is alleged children were “rushed into taking life-altering puberty blockers without adequate consideration or proper diagnosis”, with staff under pressure to adopt an “unquestioning affirmative approach”.

Mass legal action is now being pursued by lawyers against the clinic, named the Gender and Identity Development Service (GIDS), which has treated 19,000 children with gender dysphoria since 1989.

Lawyers at Pogust Goodhead have accused the clinic at the Tavistock and Portman NHS Trust of “failures in their duty of care towards young children and adolescents”.

Head of product liability, Lisa Lunt, said: “While the provision of gender dysphoria treatment for children and young adolescents, where appropriate, is an important service, many have been let down by Tavistock and Portman NHS trust.

“We support the findings of the Cass Review, Interim Report and believe there has been a real level of harm that has been perpetrated towards patients who were rushed into taking life-altering puberty blockers without adequate consideration or proper diagnosis.”

Click the screenshot to read; I’ll put the meat of the letter below: 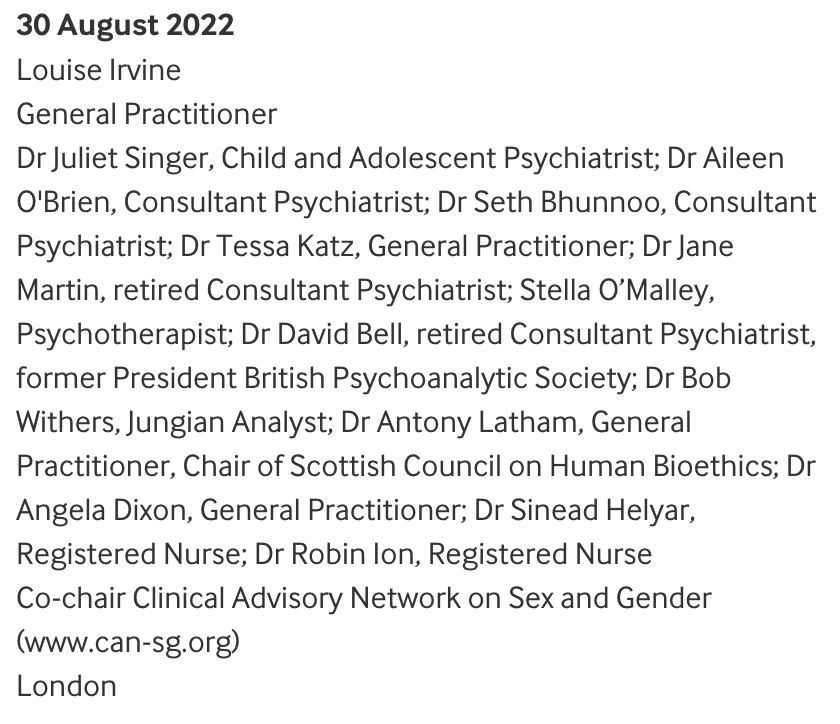 The origin of poor governance and lack of data collection needs to be openly addressed as GIDS is not unique. Globally, there are significant difficulties in discussing, let alone challenging, the practice of gender clinics, due to the belief systems of those who adhere to gender identity theory – a non-clinical ideological perspective for which there is little to no empirical support. This position requires clinicians to believe that everyone has an innate, subjective gender identity and that individuals whose bodies do not match this should be provided with ‘gender-affirming’ medical interventions regardless of the harms and lack of evidence of benefit (6,7,8). However, a child or adolescent’s sense of gender is part of a complex inner sense of self that can change during the process of development. Medicalising young people on the basis of unsubstantiated theory is unethical: there are many reasons why they might feel dysphoria, disgust, dissociated or ‘cut off’ from their physical bodies, including internalised homophobia, histories of trauma, cognitive difficulties and mental health problems. Each person suffering from such distress requires space and time to understand their feelings.

Offering puberty blockers, cross-sex hormones and radical surgery with the implicit promise of almost magical transformation may cause, and has caused, serious harms. With inadequate follow up by GIDS, no comprehensive long-term observational studies, and no reliable clinical trial data, there is simply no evidence on which to base these interventions (2,6,7,8). It is unsurprising that ‘detransitioners’ (disillusioned people who wish to reverse the effects of ‘treatments’) are coming forward; some may want legal redress and plaintiffs’ firms are seeking them out (9). Without outcome information – let alone understanding how any pre-pubertal child could make a decision to alienate adult functions they cannot understand (like sexual pleasure) – patients and their parents were never in a position to give properly informed consent to uncontrolled experimental interventions (6) clinicians failed to properly describe. These initial cases may herald more as increasing numbers of patients, parents and clinicians question the so-called ‘affirmative model’.

We would advise that the NHS proactively set up clinical services to support detransitioners, and that the NHS Litigation Authority and Medical Defence Organisations prepare. The government should look closely at materials provided by advocacy groups (such as Stonewall, Mermaids, Gendered Intelligence, and others) that teach children and clinicians (e.g. GPs, nurses, medical students and mental health professionals) gender identity theory as if it is fact, without referencing the concerns and uncertainties in the evidence. Until this is addressed young people will be at increased risk of misinterpreting their complex difficulties as proof they are ‘trans’ and believing there are simple and medical solutions to their distress.

In the future, people will look back at this time and see the treatment of dysphoric youth as not only irrational, but harmful. I still don’t understand why it happened, except that it may have helped people enter a “marginlized” group. Yes, young people themselves have been pushed by their peers to become transsexual (that’s not the only reason, of course), and social media has helped. But adults are supposed to be smarter than this.

18 thoughts on “Therapists and doctors from the UK: where Tavistock failed”