Our ducks numbers are variable—from 5-12 per day—but are not increasing. Sadly, Frisky the wood duck drake appears to have left for good, but Honey is here, and now deigns to eat duck pellets (she previously would eat only corn and mealworms). She seems to have snagged a boyfriend, too: the biggest drake in the pond (of course).

On and off we’re visited by a hen with an injured leg (GiGi which stands for G. G. which stands for “Gritty Gertie”), but her leg is improving, much to my relief. And we have Billie, a duck with a bill that she can’t fully close. But she eats very well (and from a hand). Billie also has acquired a drake, whom we call “Bernie”.

All of the young seem to have fledged, though we may have a few of Audrey’s drake offspring here. It’s hard to tell.

The pond still has ten or eleven turtles; the epidemic that killed off five of them several weeks ago appears to have abated.

So, some photos of Botany Pond and its residents. First, her Highness, Honey the Hen. 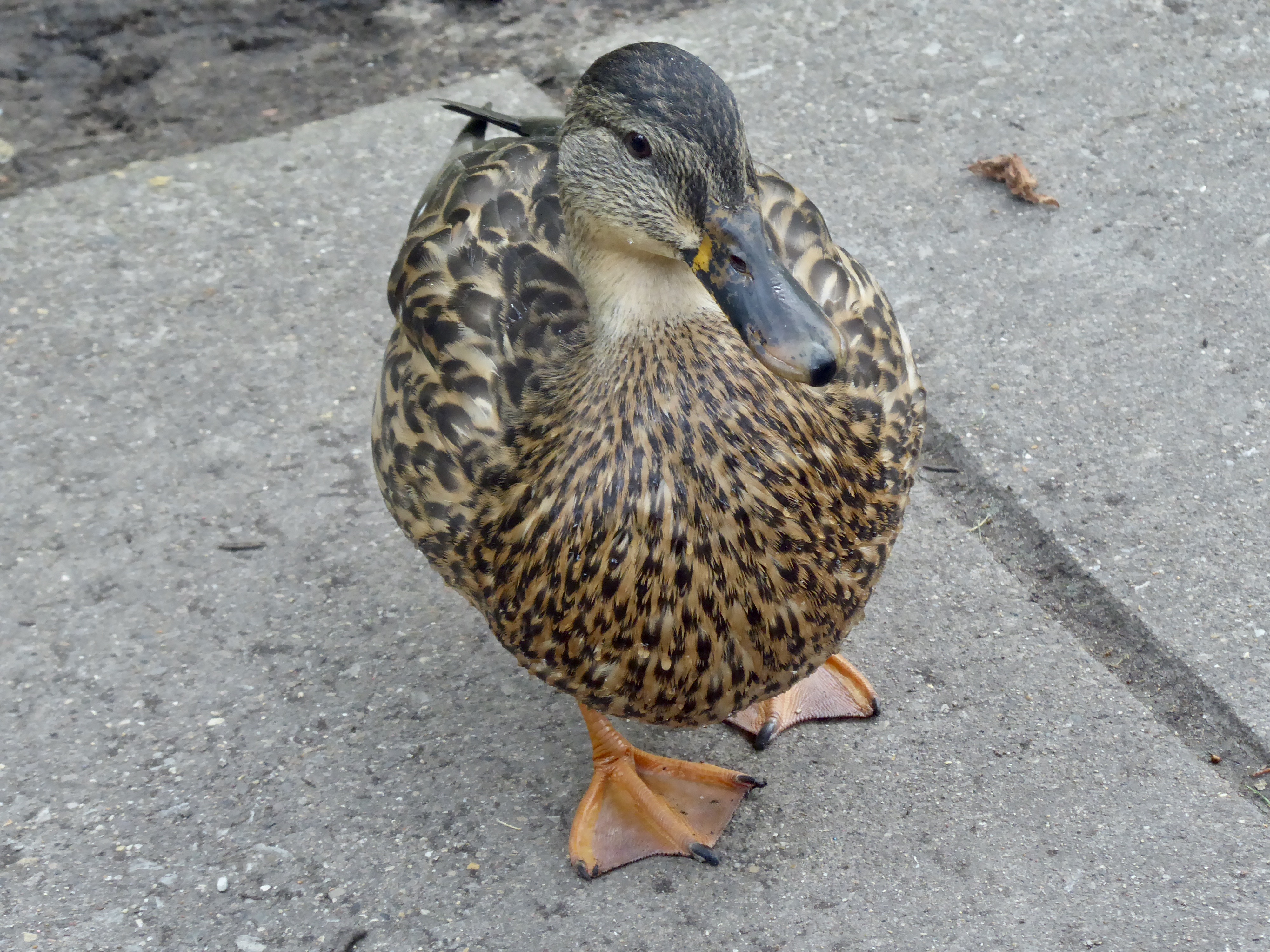 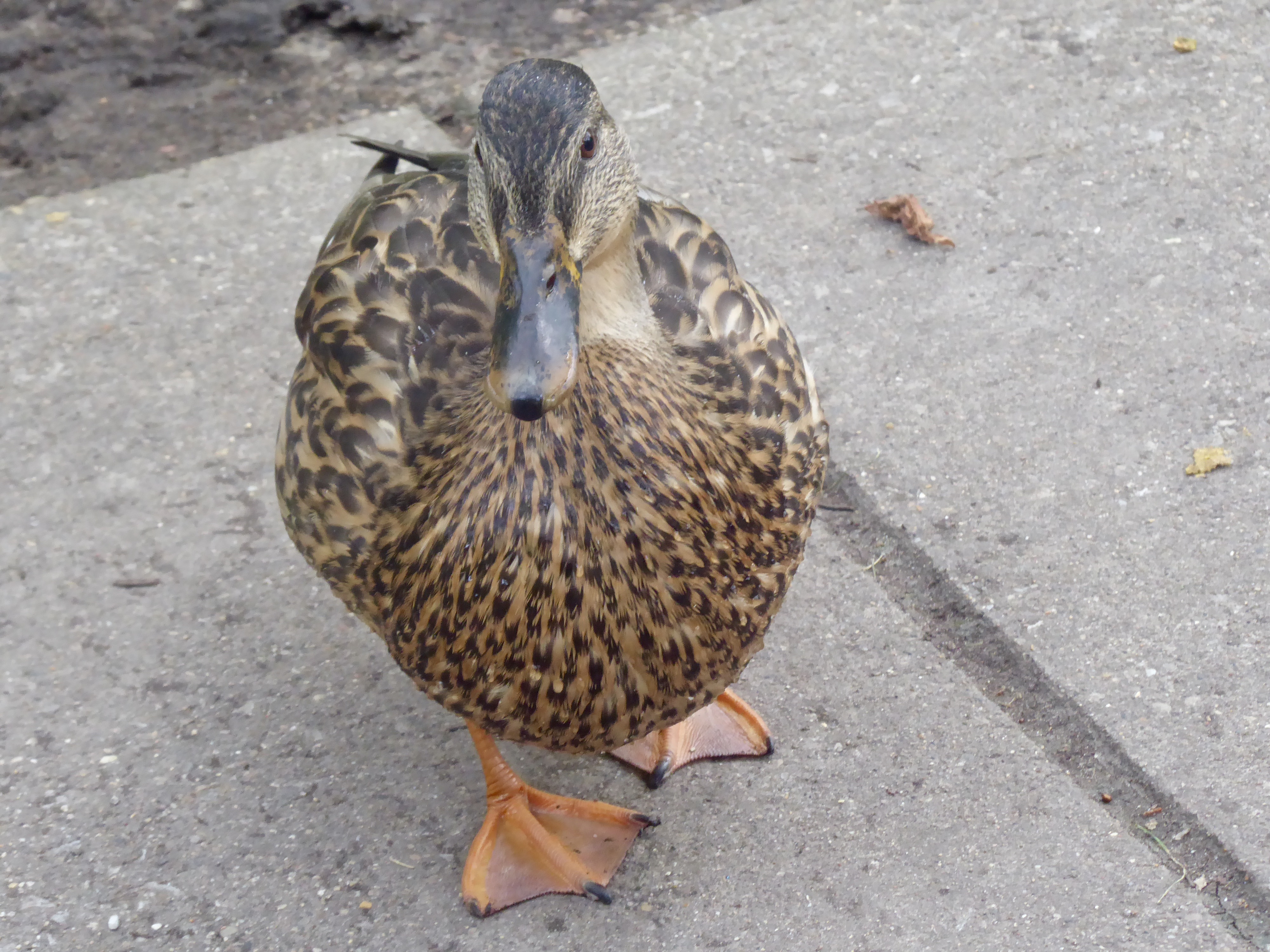 Head in the water: 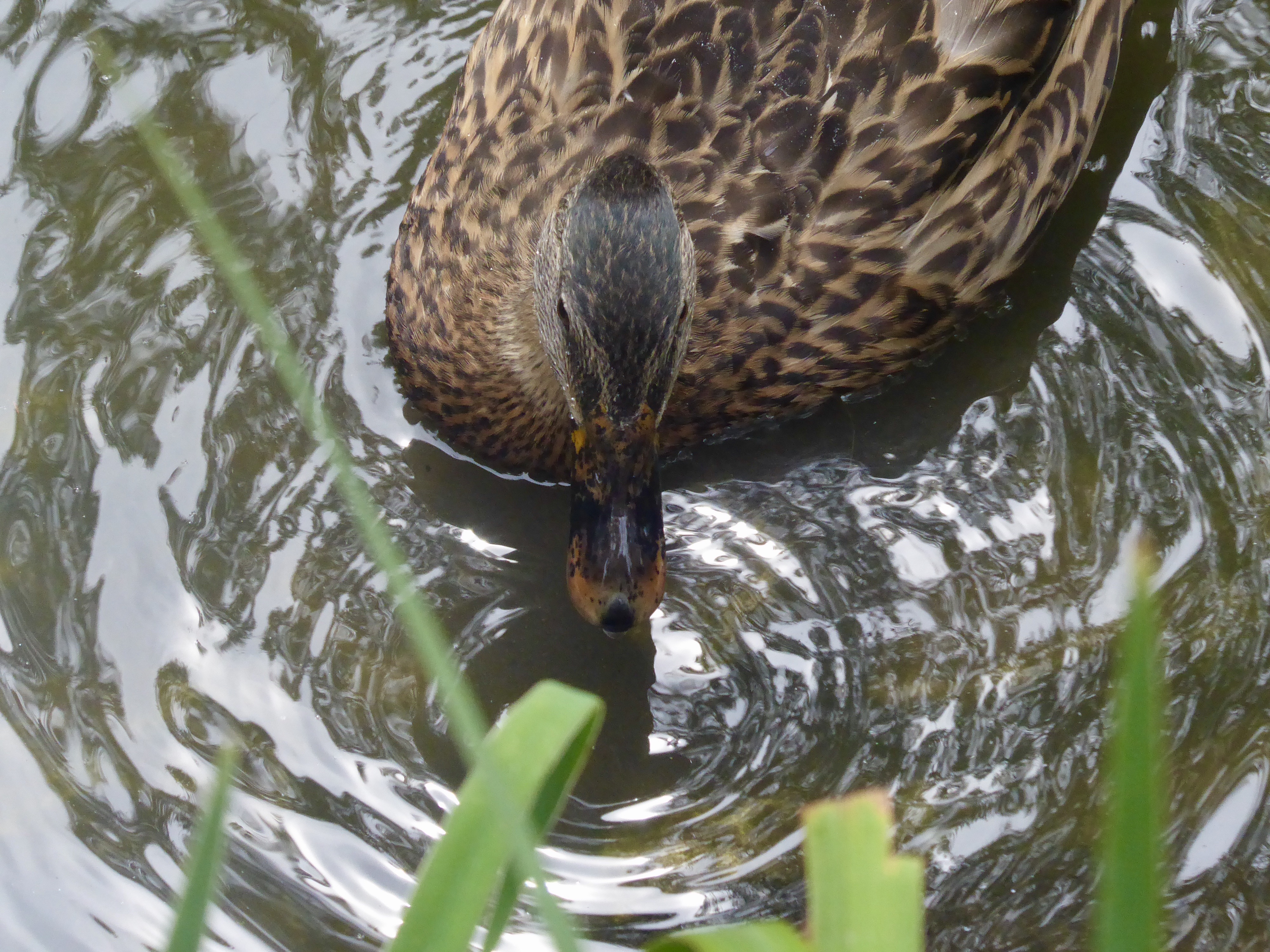 Left side (believe me, you’re going to see all of her!): 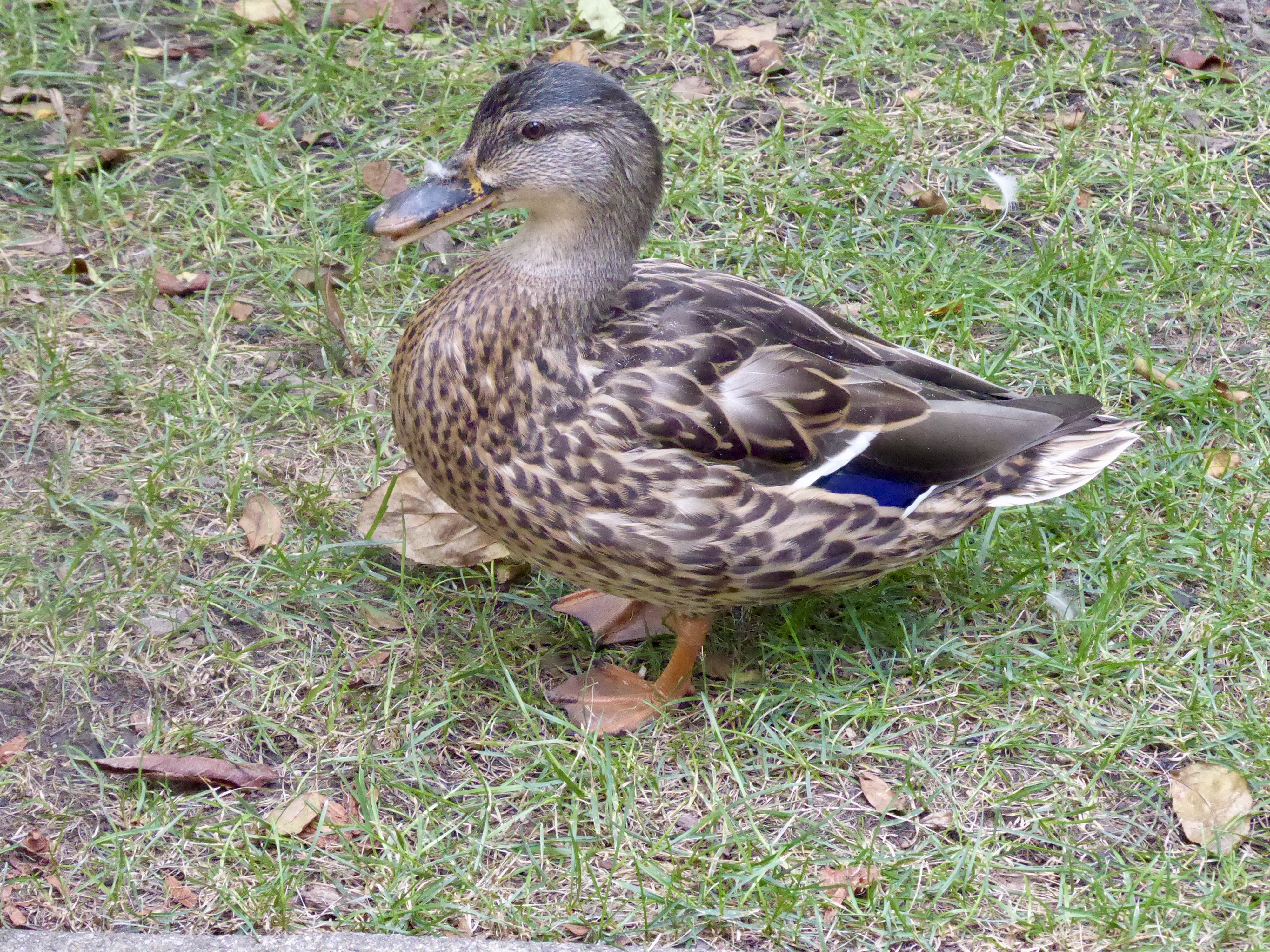 And the right side. Isn’t she a lovely hen? This may be the last season I see her. At least six years old, she’s now a Senior Mallard. Note that on both sides of her bill there’s a black triangle, which is diagnostic for her. (So is her behavior, which is aggressive.) 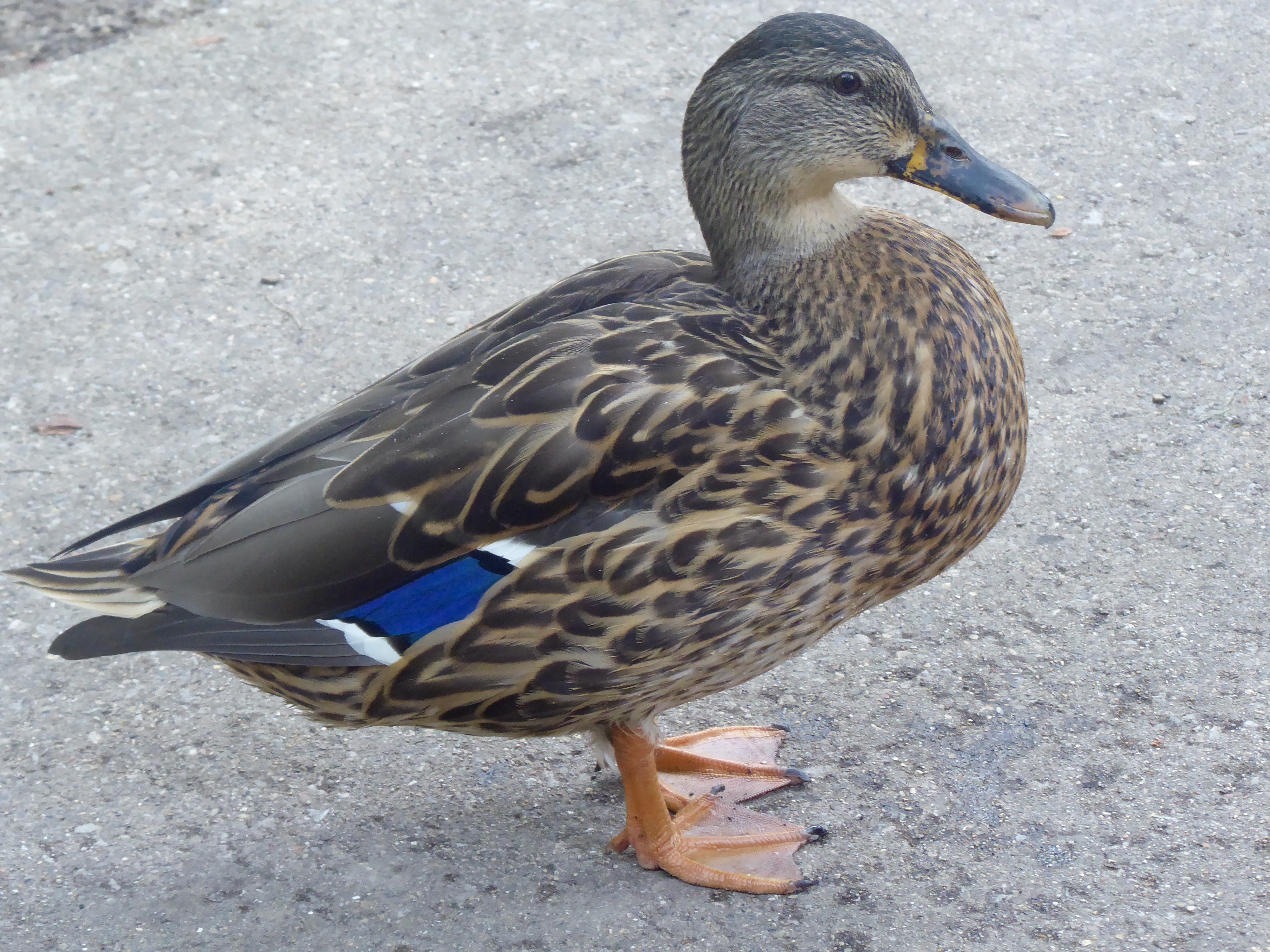 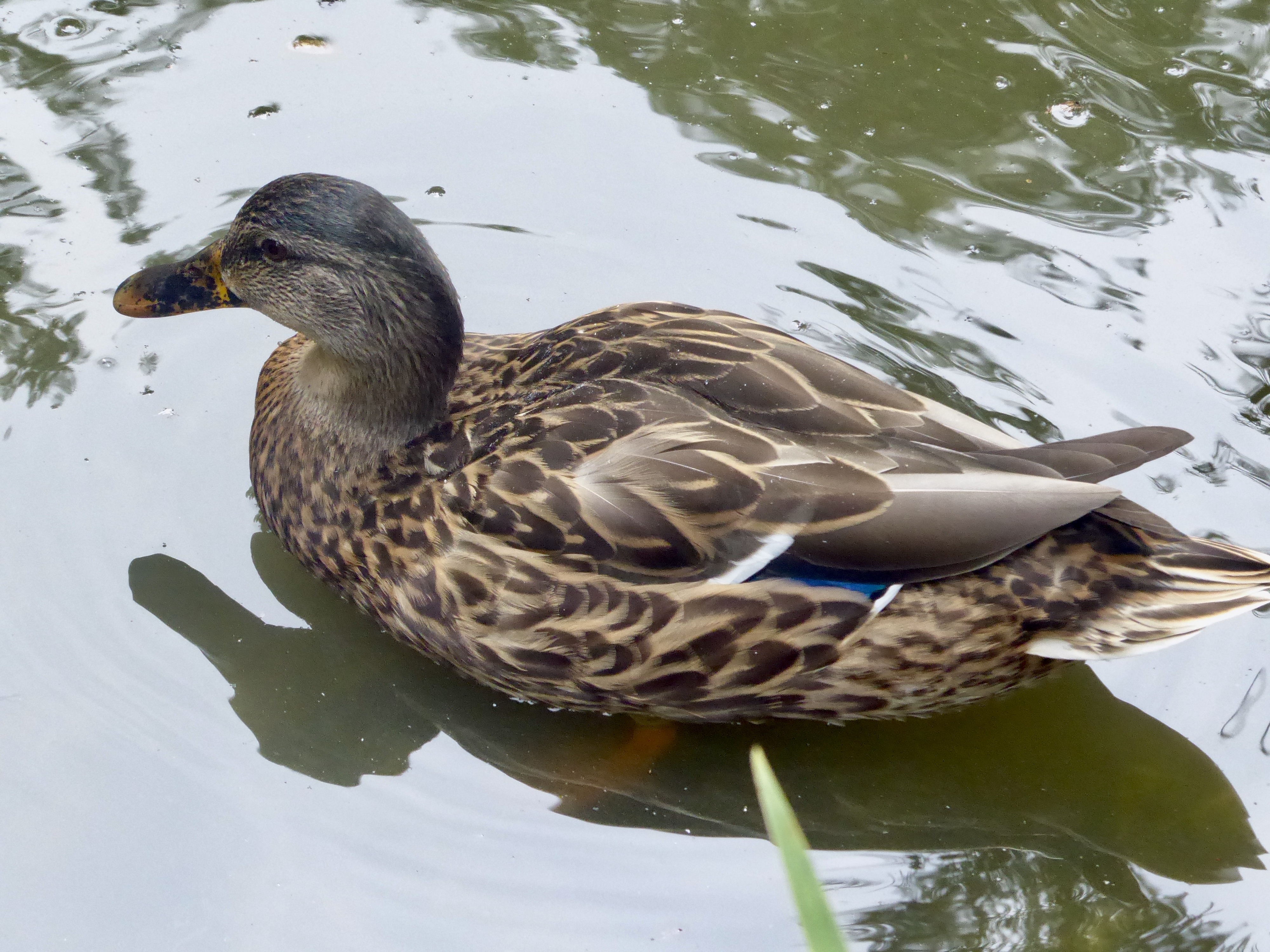 Honey and her drake, who is molting and thus is not a first-year drake. Isn’t he handsome (and huge)? We don’t yet have a name for him. The drake, with the yellow bill and head becoming green, is to the left: 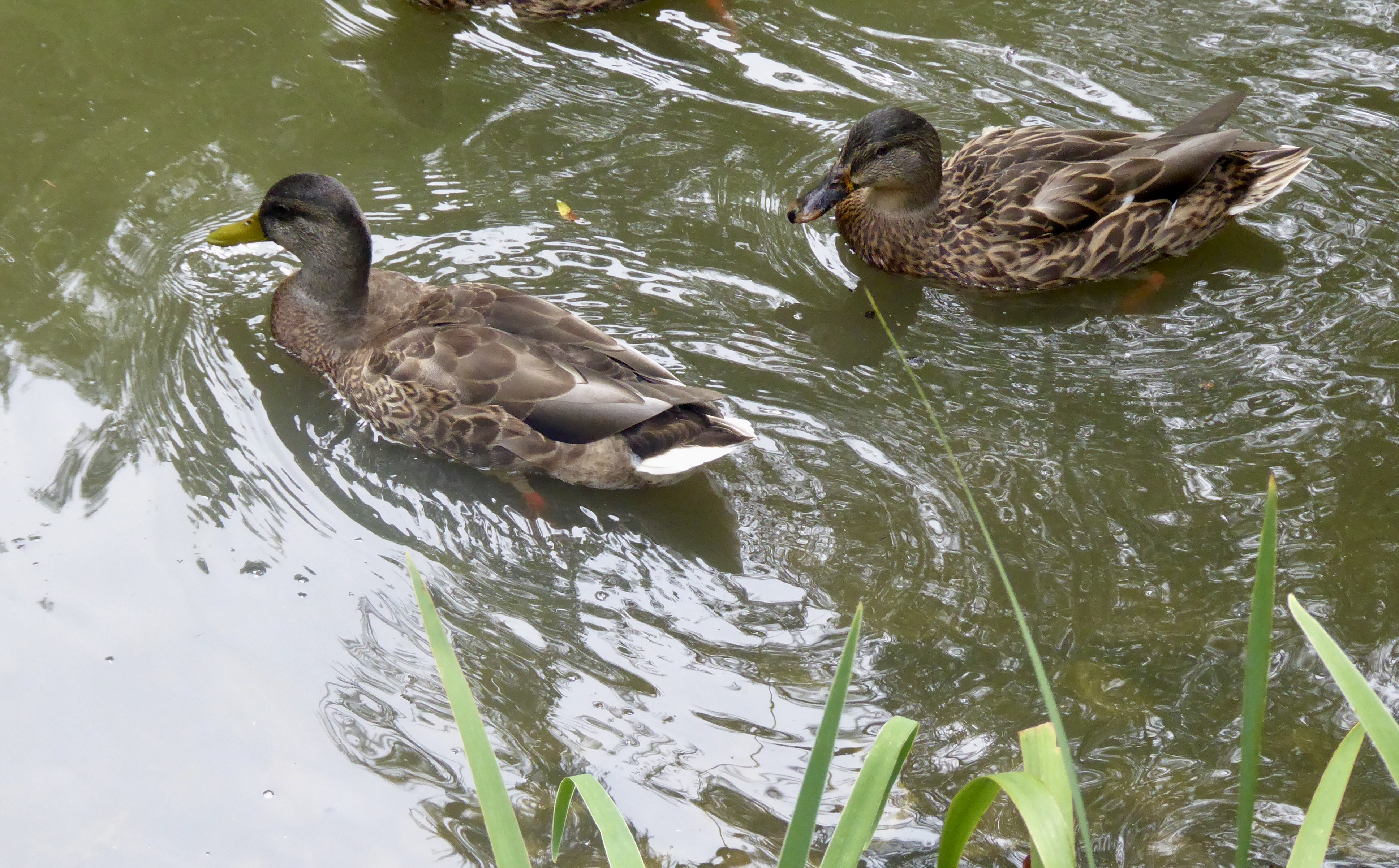 Here are Billie and Bernie. You can see that her bill is slightly open (that’s permanent). Bernie may be a first-year drake. Although she was named after her wonky bill, she’s now become quite vociferous, so “Billie” could also be short for “Billie Holiday”: 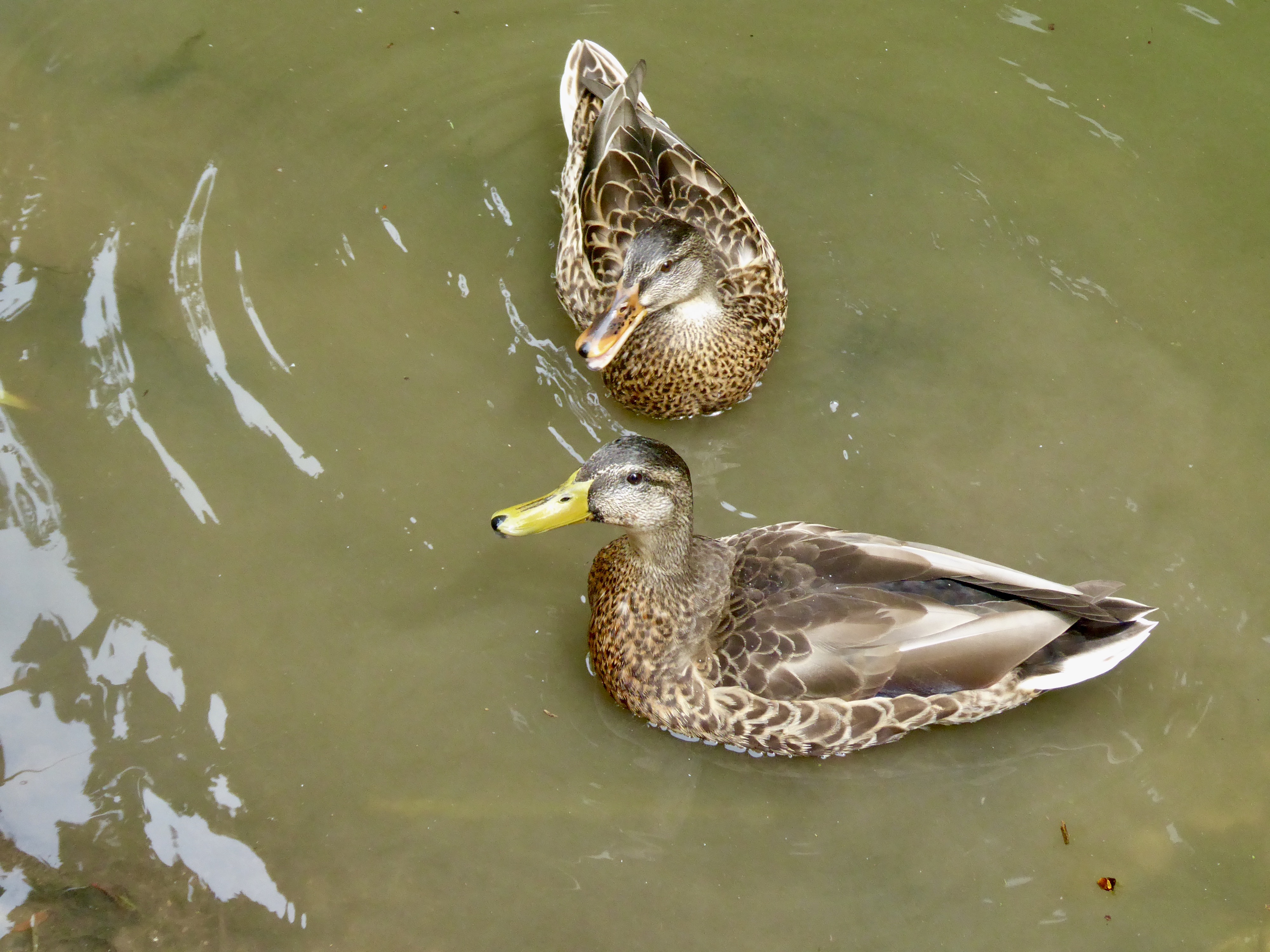 Billie is a sweet duck, one of our favorites, and I worried about whether a drake would find her attractive. But apparently one has—Bernie (named after my uncle): 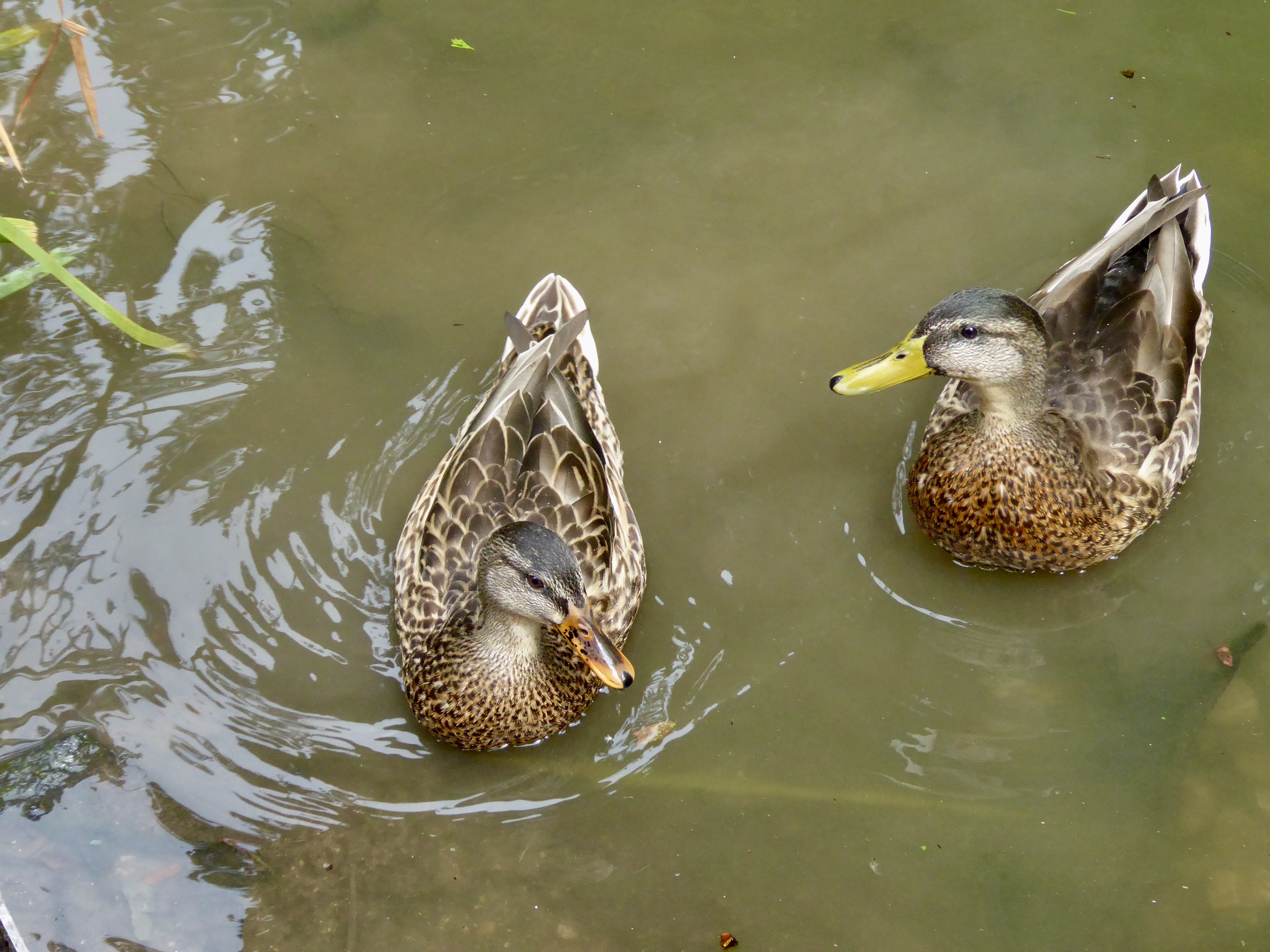 Billie has learned to eat out of our hands, though she’s a sloppy eater because she can’t fully close her bill. That means she spills a lot of pellets, but it also means she gets extra food. Look at that mess on the ground. (She immediately cleans it up.) 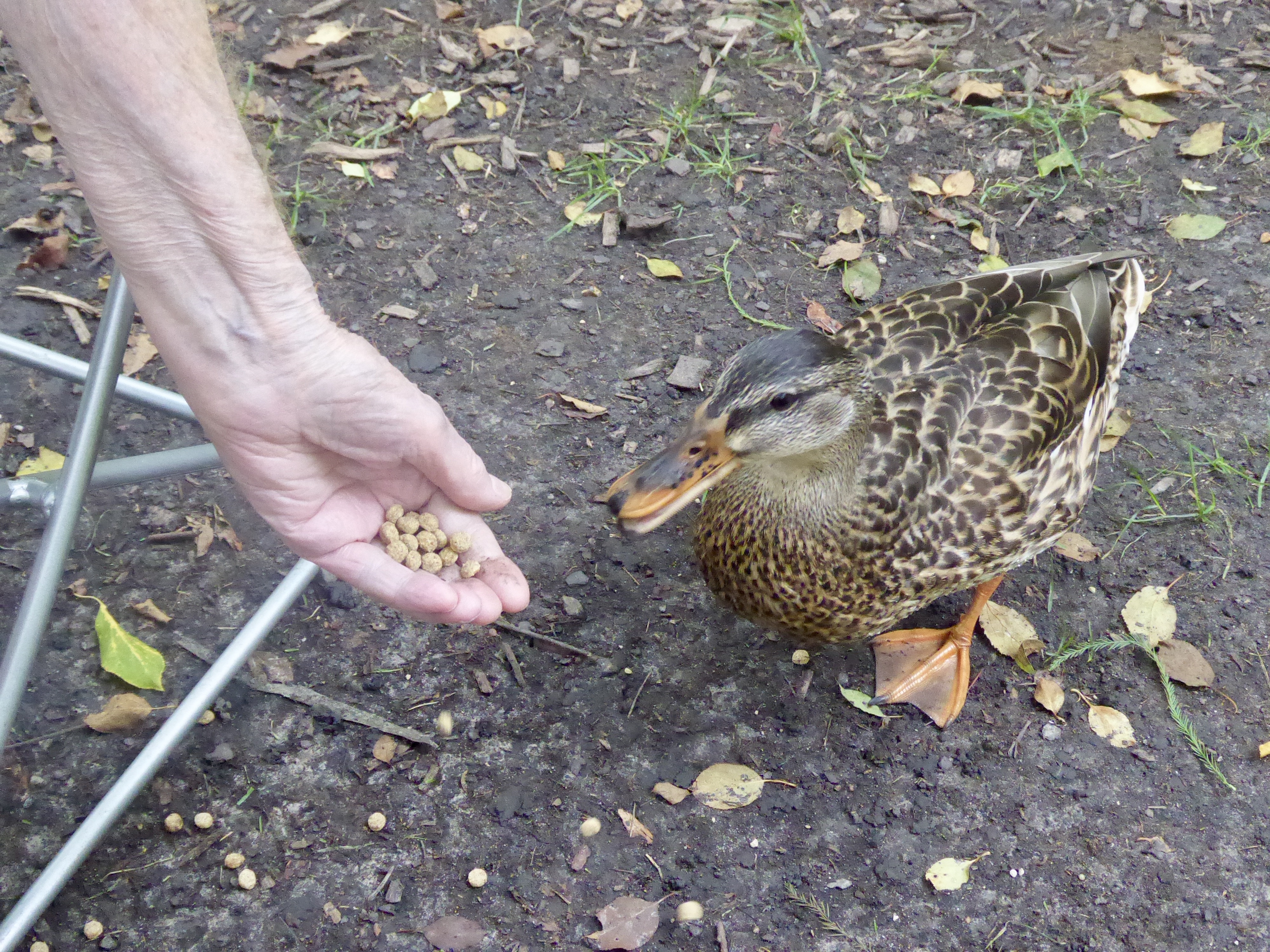 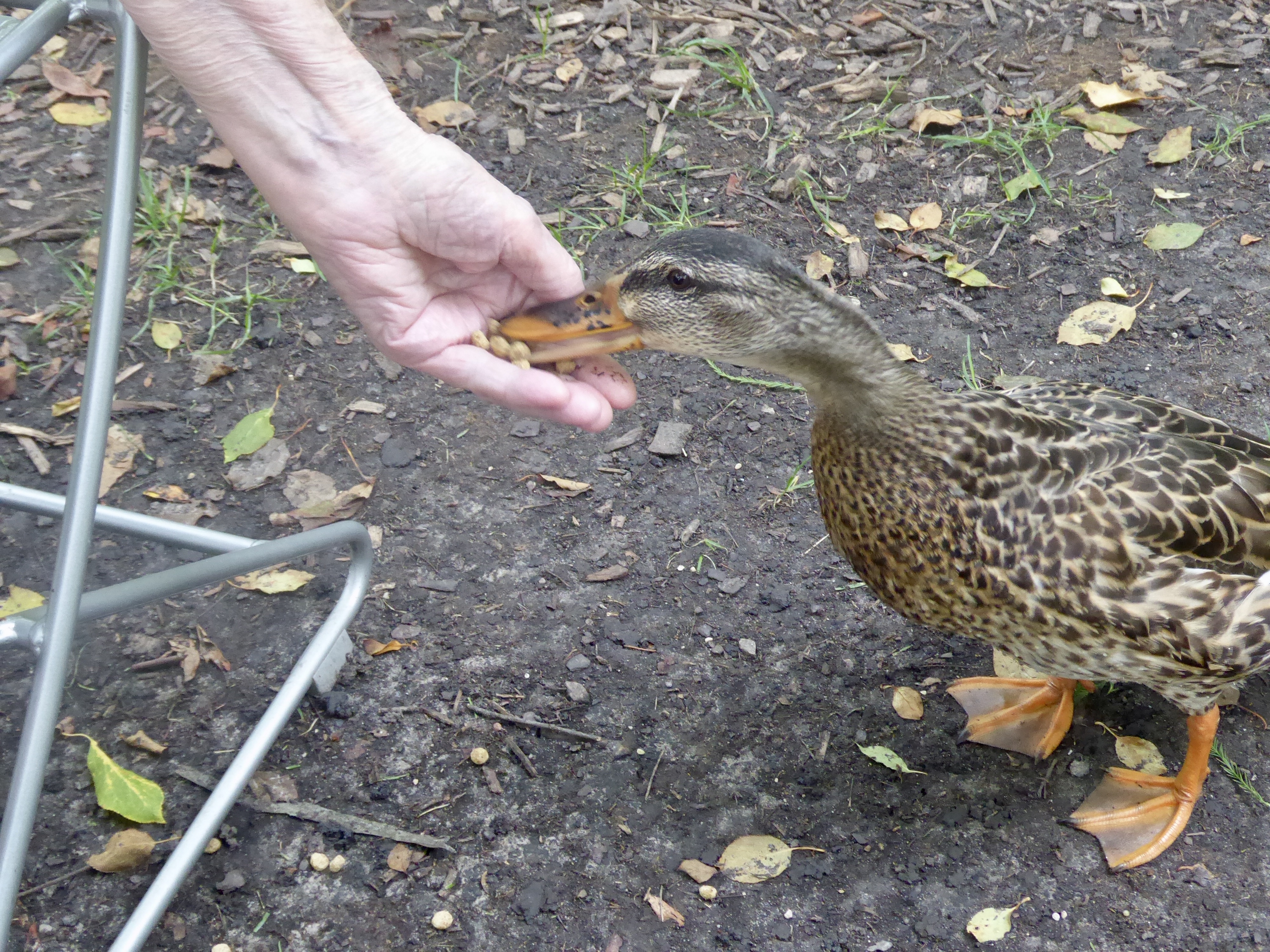 Mallards are not dumb. After watching Billie get fed this way, her new swain Bernie took to eating from the hand as well, and at the same time! He’s the first drake that I’ve seen eat from a human hand at Botany Pond. Here’s the loving couple dining together. 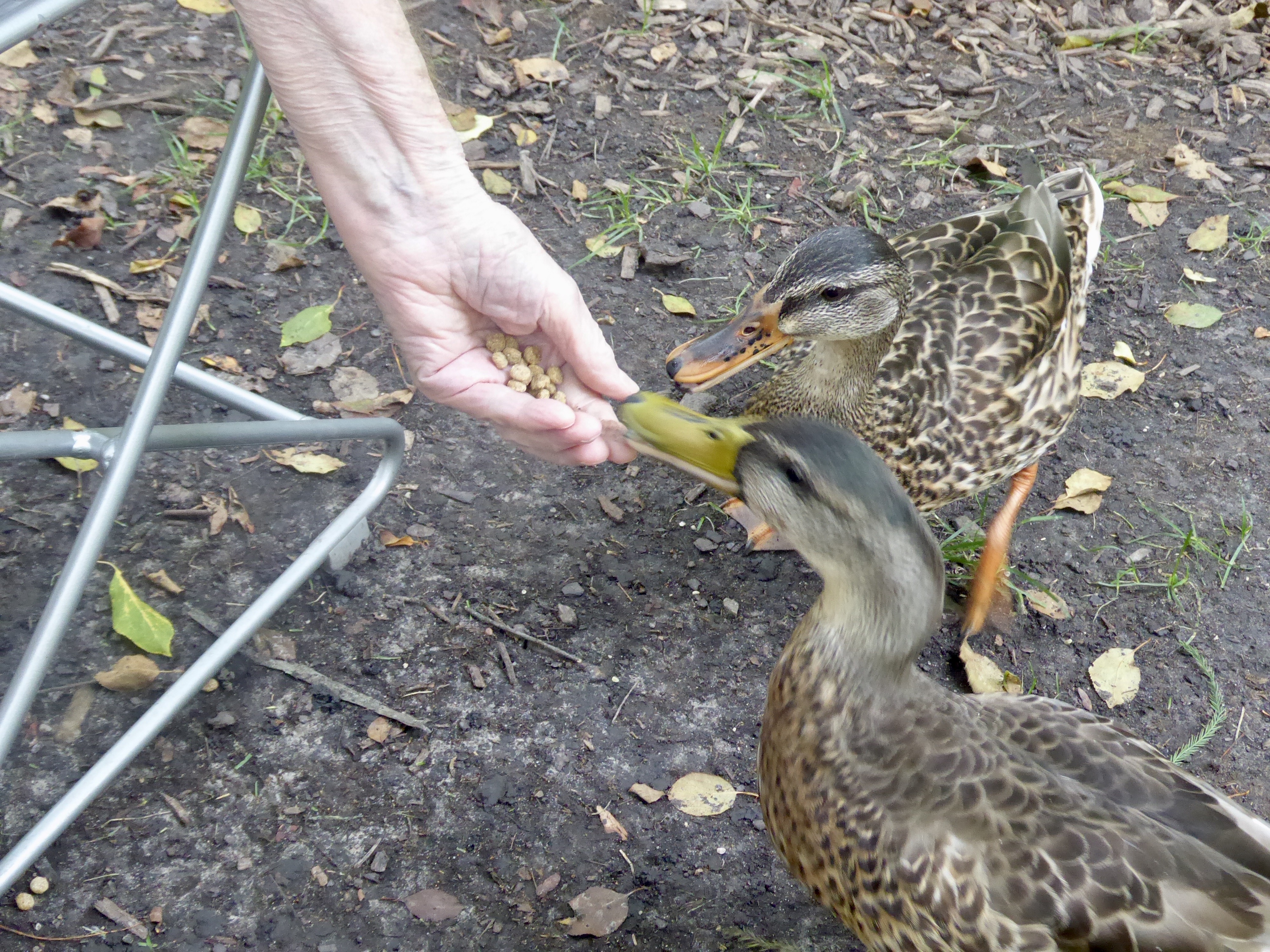 And we mustn’t forget the turtles. They’re all healthy now, and we have at least ten. Yesterday was warm and sunny, and they fought for a place in the sun, extending their heads and limbs to warm up: 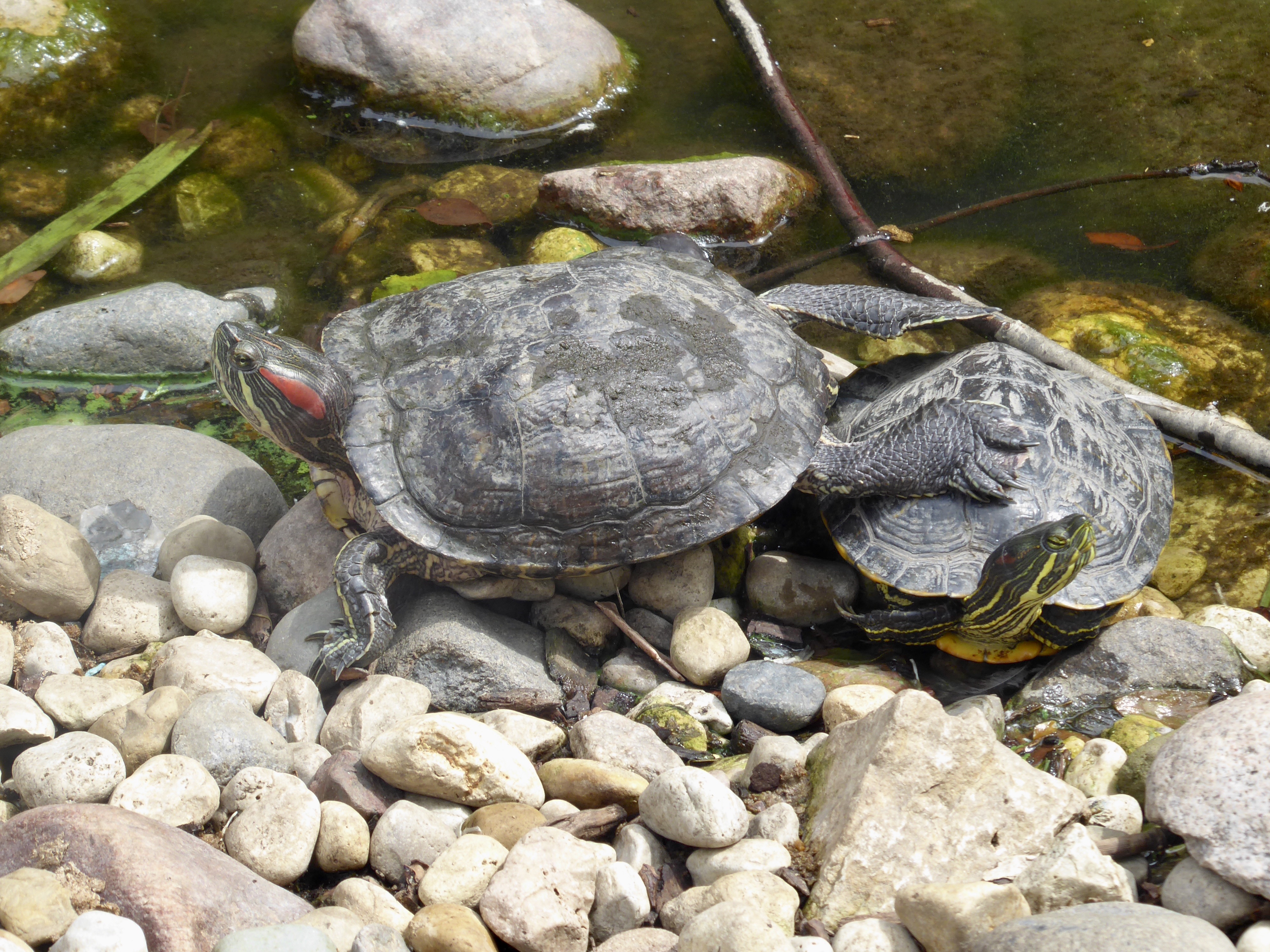 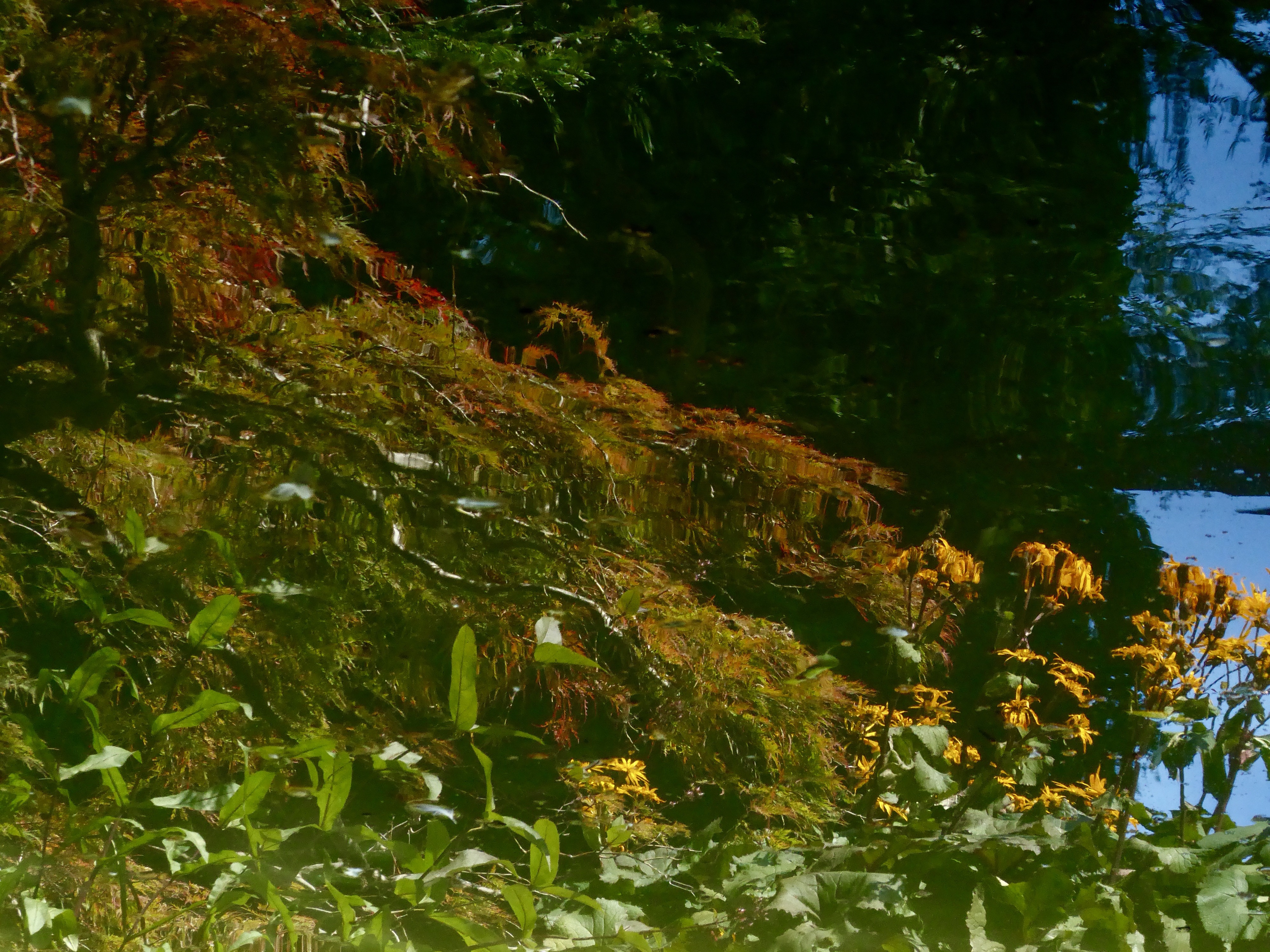 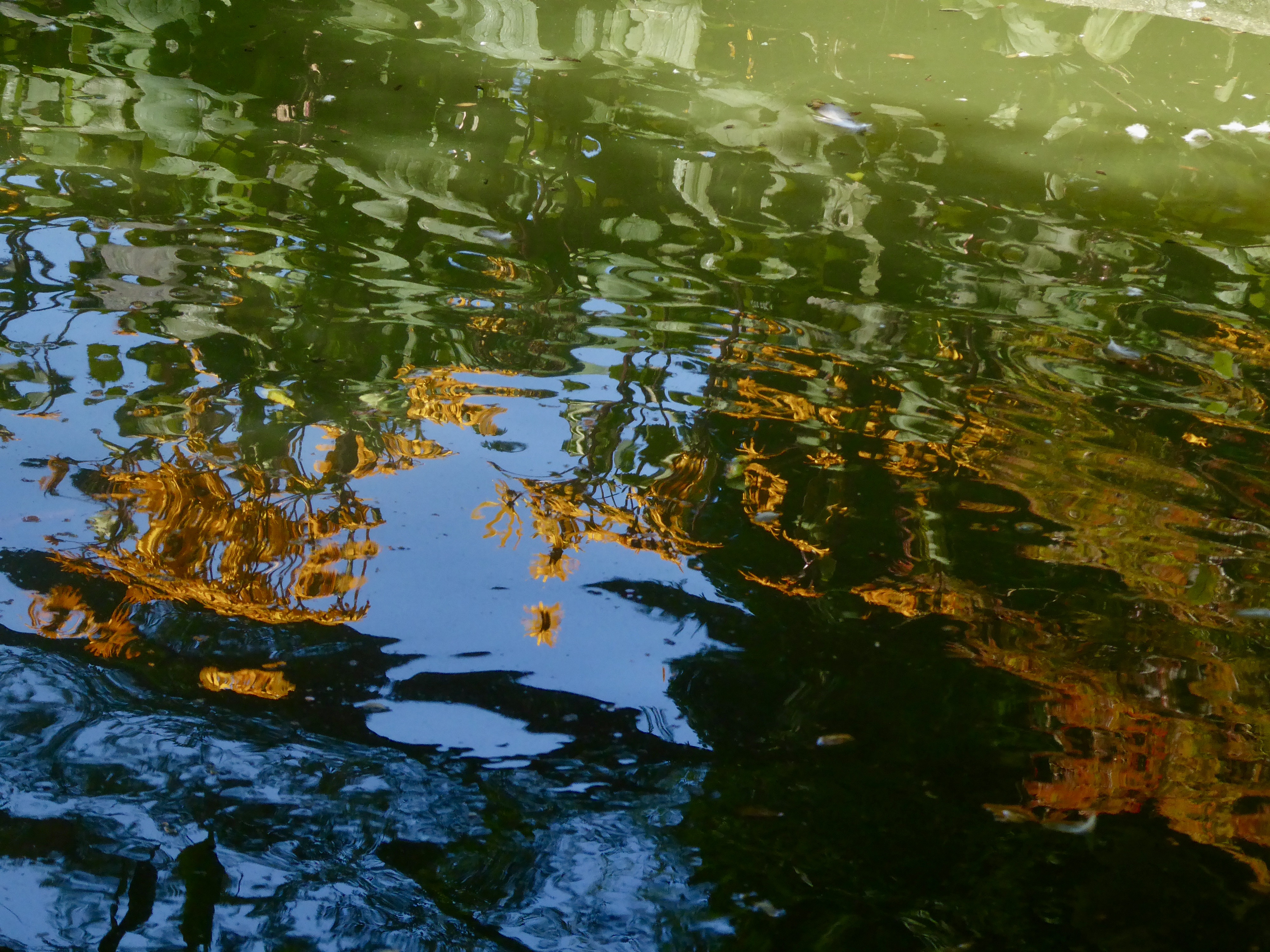 Soon the season will end; there will be no more ducks as they start draining and dredging the pond. We’re all worried about what will become of the turtles, and whether they will kill or injure any fish or turtles as they dredge.

And will I ever see Honey again?