Eleven years ago I was the elected president of the Society of the Study of Evolution (SSE), America’s premier organization for evolutionary biologists. I considered it a great honor to serve in that capacity. Now, however, I wouldn’t be so pleased, for over the past 5 or 6 years the Society has joined many other societies in organismal biology by becoming, shall I say, “quite woke.”

I smelled trouble when the SSE issued a statement declaring that sex (and gender) were continuums rather than binaries, which I beefed about here.  Yes, gender could be seen as a continuum, but not biological sex, which for nearly all animals has two simple classes distinguished by gamete size. And that’s because of evolution. How could an evolution society make a statement like that? It’s ideology, Jake!

At that point I saw things were going to get worse, as they have. The SSE then began issuing pronouncements on political issues, which in my view is something that scientific societies should not be doing.  Finally, the annual meetings have turned into venues for ideology, which included changing the names of awards named after evolutionists deemed ideologically impure, and became heavily laden with diversity presentations and initiatives. As I wrote earier this year:

Call me an old grouch, but in my view the organizers are consciously turning societies devoted to the promotion of science into organizations devoted to the promotion of social change. Yes, organizations should not discriminate against any class of people so long as they’re qualified to give talks or attend meetings, but it’s another thing entirely for a meeting to promote equity on the grounds that science is structurally racist. In fact, I think scientific societies should remain politically neutral while obeying any anti-discrimination laws. Effecting social change should be the purview of individual members of societies, as different members have different views (I know a lot of people who object to the fulminating wokeness of evolution societies.)

For the last several years, the SSE (and related American societies) have been policed by roving “Evo Allies” (trained at substantial expense) who walk around the meeting to search for potential cases of sexual harassment—despite there already being a perfectly satisfactory way of dealing with harassment complaints. I am not of course in favor of sexual harassment, but this procedure seems extreme. It’s also expensive, with the trainers charging tens of thousands of dollar for their services.

This policing, and its potential bad consequences, especially for women, is the subject of a new article on the Heterodox STEM Substack pageby Williams College professor Luana Maroja, an evolutionary biologist who has written on my site.

Maroja first describes her “lived experience” with the harassment police at the SSE meetings (this was in 2019, when the meetings were live). A snippet:

In 2019 my professional society (The Society for the Study of Evolution – SSE) hired a consultant to help “prevent sexual harassment at the [annual] conference.”  The initiative consisted of training volunteers to be “allies” (they got buttons and walked among us signaling their role as meeting police), projecting messages (powerpoint slides) on the walls of the poster session saying “stop harassment now,” and putting posters in all bathrooms along with anonymous boxes for depositing complaints about harassment.  This came at a cost: about $10 dollars increase in registration fees per participant, resulting in tens of thousands in the consultant’s pocket.  But aside from cost, are these initiatives a net positive or a net negative for scientific interactions?

I have been attending the SSE meetings since 2003.  Compared to conferences in my home country, Brazil, SSE conferences were a paradise – nobody ever grabbed my rear end, said nasty things in my ear or followed me around.  Yes, there was the normal degree of flirting, but it was polite, with people backing off when they were rebuffed.   Perhaps I have thick skin, but I don’t think anyone would say that serious harassment or sexual violence were commonplace at the American meetings, and there were already procedures in place—involving both the local police and the conference administrators—to deal with serious offences.  Many people think it’s a good thing to raise awareness about even minor actions that might be perceived as unwanted attention.  But is it?

Her answer is “not really,” for she gives data showing that there appears to have been a “chilling effect” from overpolicing sexual interactions. Her informal survey of her colleagues revealed that male scientists have become more wary of mentoring or even talking to junior women for fear of such accusations.

But of course this is anecdotal. Maroja then adduces real data from a paper by Marina Gertsberg, a senior lecturer in Finance at the University of Melbourne. Click on the link to read it (a pdf is free). It’s from SSRN, which appears to be a kind of ARχiv of preprints, so it hasn’t yet been published; be aware of that:

Gertsberg surveyed the number of new collaborations (judged from c.v.s of faculty) between men and women in Economics before the #MeToo movement (2012-2017) compared with afterwards (2018-now). These were compared with new collaborations between men and men, and with collaborators inside and outside the faculty member’s institution.  There are graphs, but read Luana’s piece or Gertsberg’s paper to see them; I’ll just give a summary:

This represents a huge loss to both men and women, but it especially harms women.  Indeed, the academic output of females fell significantly after #MeToo (a decrease of between 0.7-1.7 projects per year, with the loss in male collaborators explaining 60% of this decline), while the output of males did not (they were apparently able to find other male collaborators).

There can, of course, be other explanations for these data, and feel free to suggest them below. 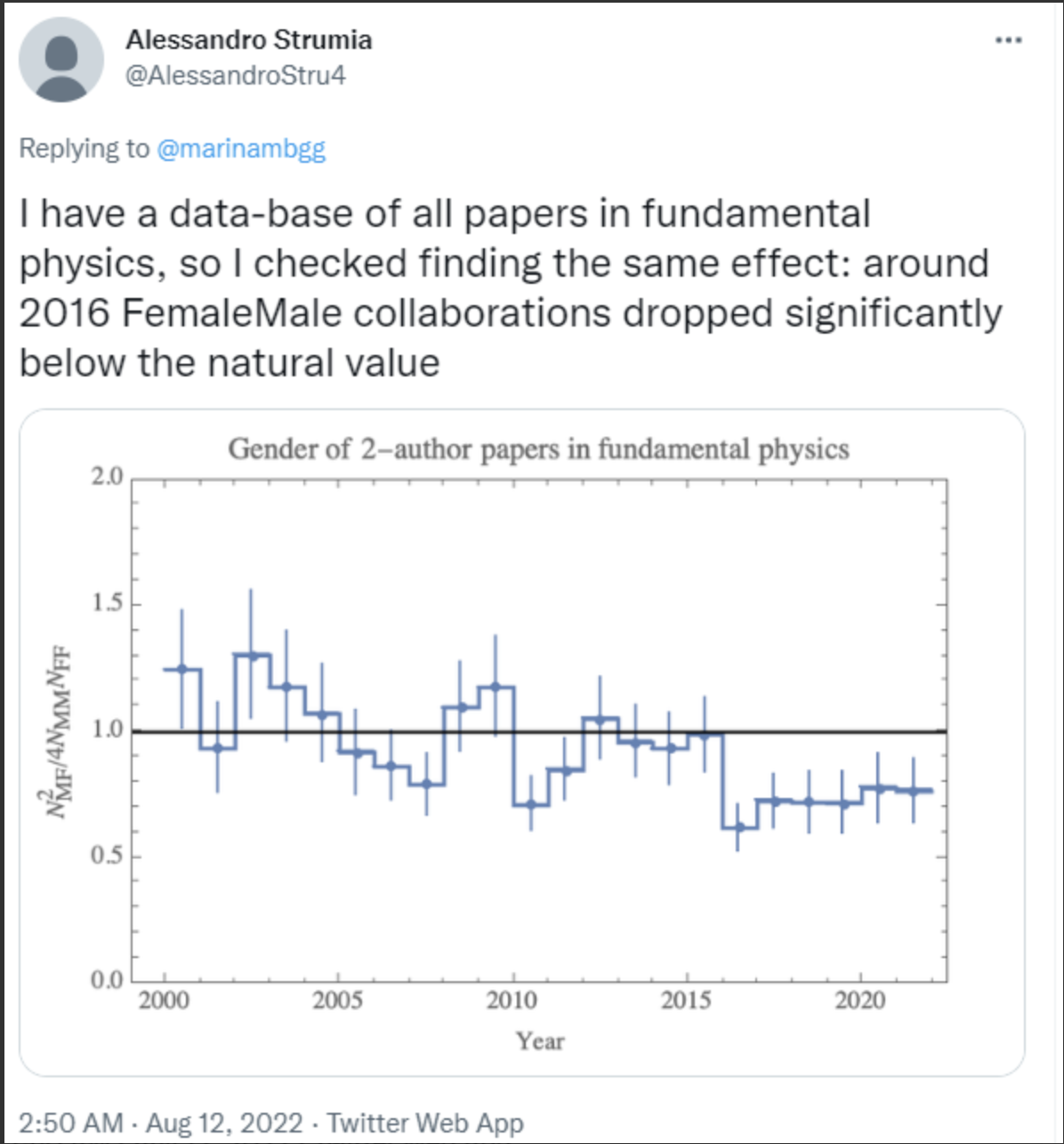 No sane person is in favor of sexual harassment. Maroja’s message is that it can be taken too far, to the point that men shy away from collaborating with women for fear of accusations of harassment. Some of my colleagues, who are not harassers, will nevertheless not talk to a female undergraduate unless there’s someone (preferably female) either overhearing the conversation or witnessing it.

Ideally, all women should not be viewed as potential complainants, nor should all men be seen as potential harassers or predators. This infantilizes both sexes and, when it comes in the form of roving vigilantes at meetings, is also patronizing.

It’s clear that well-intentioned actions (protecting women from harassment) can be taken too far.  I hope that our scientific professional societies will absorb these data and start taking steps to bring people together rather than separate them.  Good starts would be clarifying harassment policies and keeping “harassment consultants”, who profit from promoting the idea that harassment is everywhere, out of conferences.  Another important step would be to eliminate anonymous complaints, which set the bar for a complaint too low and can be used for revenge and to bring down competitors and enemies. Both of these effects lead men to worry about what they might be accused of and to thus limit interactions with women. Finally, any sexual harassment judgements should only be made after a pre-defined, fair process where the accused can challenge the accuser– a person should be considered innocent until proven guilty.