It’s also National #2 Pencil Day (the ONLY pencil to use), Baby Boomer’s Recognition Day (I am one!), World Calligraphy Day, and, most important, Black Cat Appreciation Day.

Driscoll is circled in the photo below. The car was going 4 miles per hour. Wikipedia adds this: “The coroner, Percy Morrison (Croydon division of Surrey), said he hoped “such a thing would never happen again”. The Royal Society for the Prevention of Accidents estimated 550,000 people had been killed on UK roads by 2010.” 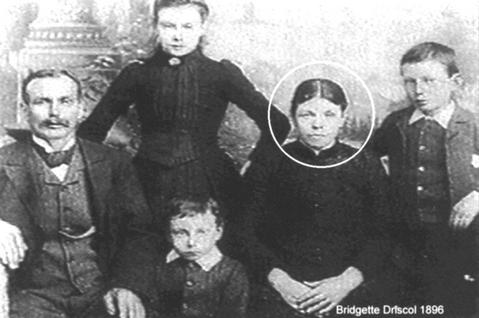 The girl, Mary Phagan, worked in Frank’s pencil factory, and her body was found in the factory basement. Frank was tried. convicted, and sentenced to death, but the governor commuted his sentence to life imprisonment. That angered the mob (Frank was Jewish), and so he was abducted and hanged. A photo is below, both before and after. Note the crowd posing proudly with the body (pieces of his shirt and of the rope went for a good price after the hanging). 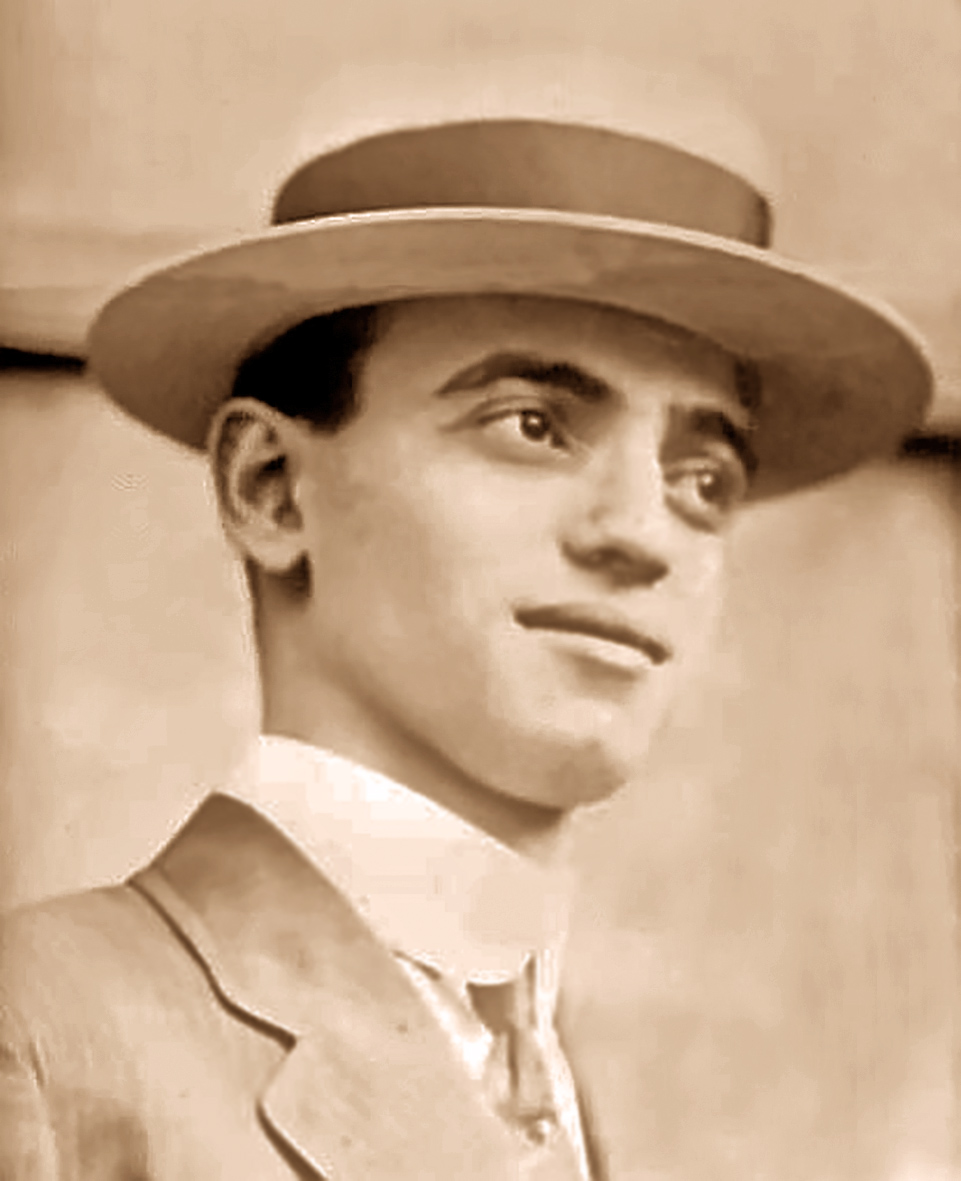 The caption is from Wikipedia:

Many more blacks than whites were lynched, of course, especially beginning about 1900. You can see the statistics here.

A first edition of this puppy will cost you about $9000: 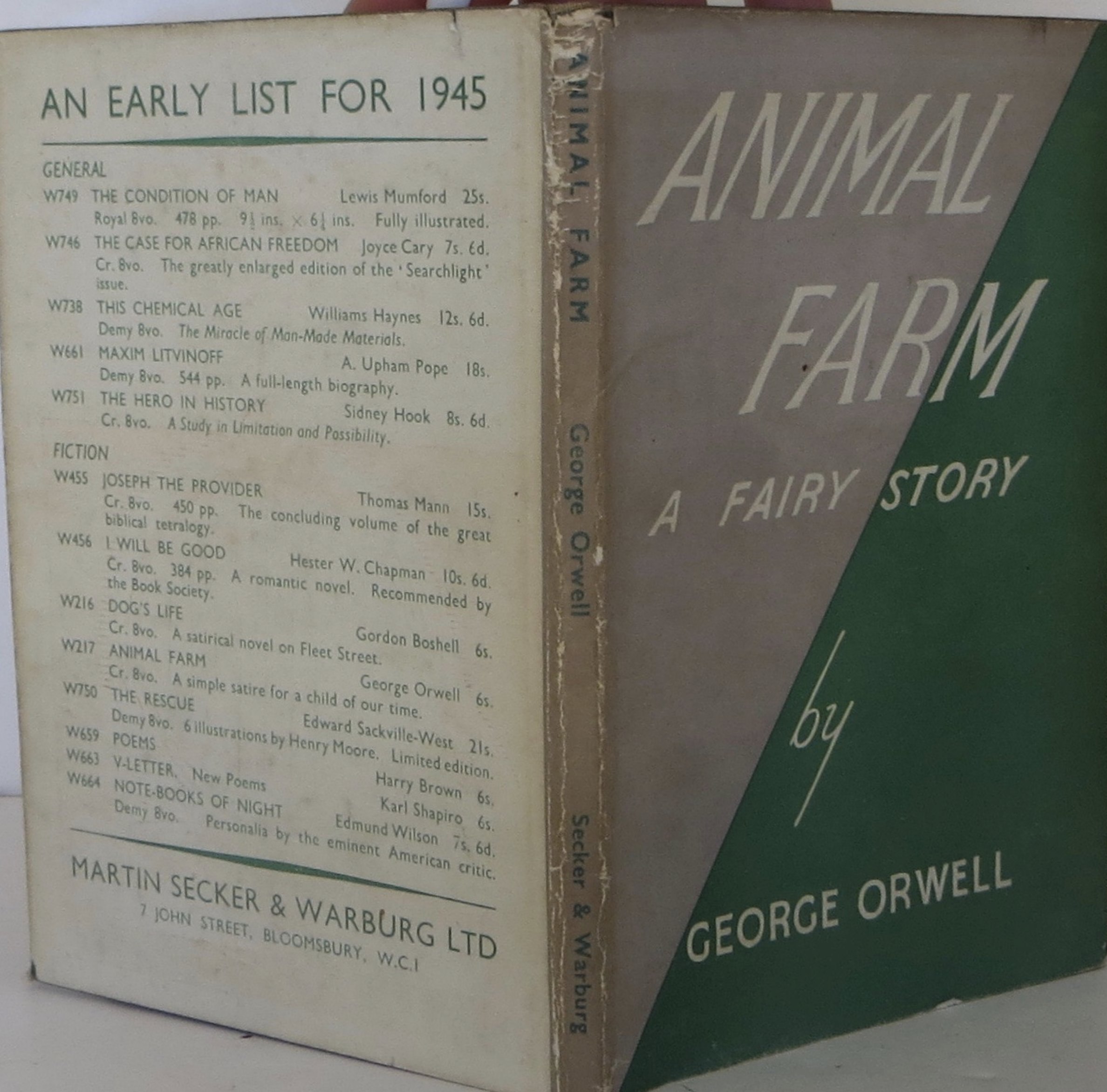 Pakistan was divided into two chunks, as shown below, with the eastern one later becoming Bangladesh. Radcliffe was given just five weeks to divide the Muslim areas from the Hindu ones, and this led to the largest migration in history, accompanied by a tremendous amount of violence (up to a million killed). 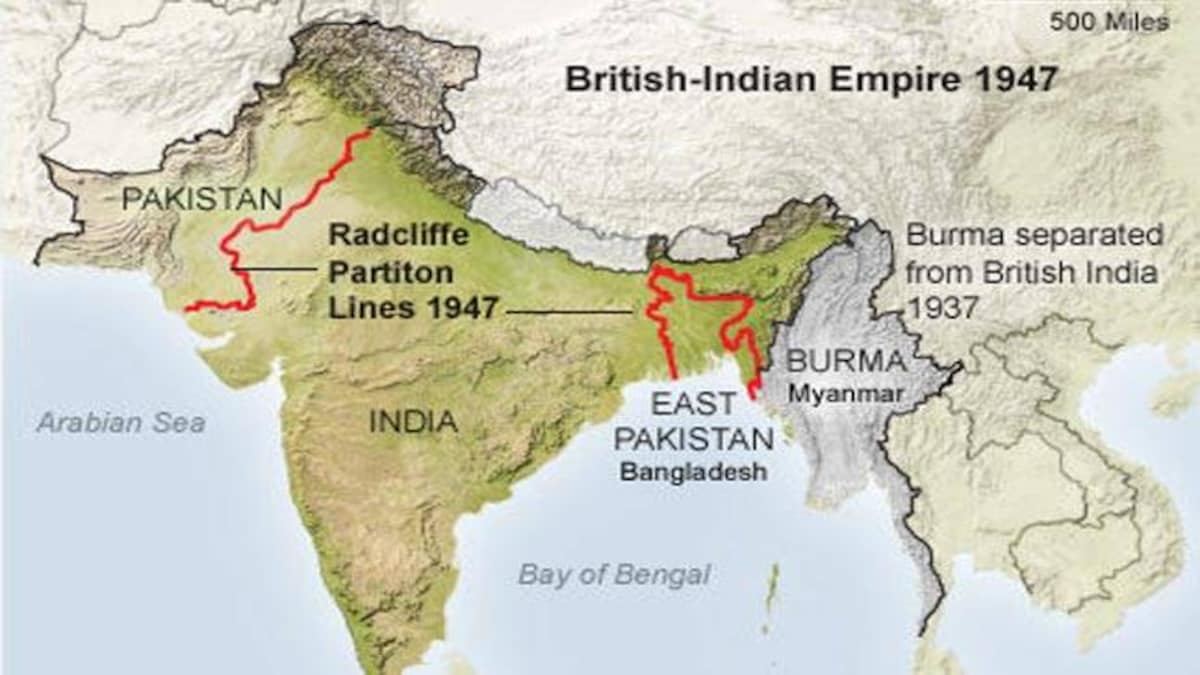 This is a horrible story that I remember well. Fechter made it to the top of the wall, but then was shot in the pelvis by East German border guards and fell back into the East German “death strip.” It took him an hour to die, and the East Germans, ignoring his screams for help, refused to fetch him and give him medical care. Fechter bled to death before the eyes of the guards and horrified West Berliners.

Here’s a short video about the killing. Can you imagine not only the lack of help, but the mentality that it’s preferable to kill someone rather than let him leave your country? (Of course this is widespread, viz., North Korea.)

The settlers were Israelis who lived in Gaza and were forcibly removed by Israel. In total, 39 Israeli settlements were removed from both Gaza and Sinai in a month, all as part of the  Disengagement Plan Implementation Law. This was a good-will gesture by Ariel Sharon to push the Oslo negotiations forward. Almost all of Israel objected.

*Biden signed the Build Back At Least a Bit Better bill yesterday, so, like lox, he’s really on a roll.

“This bill is the biggest step forward on climate ever,” Mr. Biden said, after drawing a standing ovation from a White House crowd filled largely with aides and allies.

The bill, which Democrats named the Inflation Reduction Act, invests $370 billion in spending and tax credits in low-emission forms of energy to fight climate change. It extends federal health-insurance subsidies, allows the government to negotiate prescription drug prices for seniors on Medicare and is expected to reduce the federal budget deficit by about $300 billion over 10 years.

The legislation would increase taxes by about $300 billion, largely by imposing new levies on big corporations. The law includes a new tax on certain corporate stock repurchases and a minimum tax on large firms that use deductions and other methods to reduce their tax bills. It also bolsters funding for the Internal Revenue Service in an effort to crack down on tax evasion and collect potentially hundreds of billions of dollars that are currently owed to the government but not paid by high earners and corporations.

My only worry is not about the bill, but about whether the U.S. cutting greenhouse gases drastically by 2030, which is great, will make a dent in global warming. We’re truly in the tragedy of the commons here, and if other nations don’t do likewise, we’ll still be screwed—it will just take a bit longer.

*The Ukrainian elite forces are wreaking havoc behind Russian lines. Today they apparently blew up an ammunition dump in Crimea, reminiscent of the Ukrainian destruction of a number of planes at a Russian airbase in Crimea. This really upsets Putin (who took Crimea a while back from Ukraine), as he sees the peninsula as a “sacred space”:

A series of brazen attacks on Russian-occupied Crimea by Ukraine in recent days — the latest on Tuesday by an elite military unit operating behind enemy lines — come in defiance of dire warnings of retaliation from Moscow. A senior Russian official vowed last month that if Ukraine attacked Crimea, it would immediately face its “Judgment Day.”

The Black Sea peninsula that Russia illegally seized in 2014 is more than a crucial military base and staging ground for its invasion of Ukraine. It holds special meaning for President Vladimir V. Putin, who has told his people that Crimea is a “sacred place” and Russia’s “holy land.” And by repeatedly striking at the territory, which Russia has held for the better part of a decade, Ukraine has posed a fresh challenge to Mr. Putin’s standing at home.

On Tuesday, huge explosions rocked a Russian ammunition depot, as Ukraine tries to counter Moscow’s advantages in matériel and disrupt supply lines by ratcheting up its military tactics and striking deep behind the front. Last week, blasts at a military airfield in Crimea sent beachgoers rushing for cover, and an attack by a makeshift drone in the port city of Sevastopol on July 31 forced Russia to cancel its Navy Day celebrations.

My advice to that elite Ukrainian unit: “Keep shootin’ at Putin.”

*The Washington Post has a long but illuminating article (based on secret intelligence reports) on how the U.S. sussed out that Russia was going to invade Ukraine before it happened, and how they planned to act when it did. Apparently this information was supplied by a network of information from satellites, military judgment, and even spies. (Don’t forget that your genial host also predicted it, though Biden didn’t ask me.) This article is apparently just the first in a WaPo series on the “road to war”.

The U.S. intelligence community had penetrated multiple points of Russia’s political leadership, spying apparatus and military, from senior levels to the front lines, according to U.S. officials.

What was harder was to convince our European allies that the invasion was imminent, and then build a coalition that could oppose it without themselves engaging in battle:

As he absorbed the briefing, Biden, who had taken office promising to keep the country out of new wars, was determined that Putin must either be deterred or confronted, and that the United States must not act alone. Yet NATO was far from unified on how to deal with Moscow, and U.S. credibility was weak. After a disastrous occupation of Iraq, the chaos that followed the U.S. withdrawal from Afghanistan, and four years of President Donald Trump seeking to undermine the alliance, it was far from certain that Biden could effectively lead a Western response to an expansionist Russia.

According to the intelligence, the Russians would come from the north, on either side of Kyiv. One force would move east of the capital through the Ukrainian city of Chernihiv, while the other would flank Kyiv on the west, pushing southward from Belarus through a natural gap between the “exclusion zone” at the abandoned Chernobyl nuclear plant and surrounding marshland. The attack would happen in the winter so that the hard earth would make the terrain easily passable for tanks. Forming a pincer around the capital, Russian troops planned to seize Kyiv in three to four days. The Spetsnaz, their special forces, would find and remove President Volodymyr Zelensky, killing him if necessary, and install a Kremlin-friendly puppet government.

Separately, Russian forces would come from the east and drive through central Ukraine to the Dnieper River, while troops from Crimea took over the southeastern coast. Those actions could take several weeks, the Russian plans predicted.

And by gum, Uncle Joe did it. Yes, he sort of screwed up our exist from Afghanistan, but you have to give the guy credit (and credit also goes to NATO as a whole) for forming a coalition that has largely stalled the Russians without starting a wider war.

*Speaking of Republicans running for election, you probably know that Sarah Palin, whom most of us were glad to see leave the national stage, is trying to get before the footlights again. In other words, she’s running for a House seat from Alaska—the only one open this fall. Her election is not a sure thing, though, as Alaskans worry about whether she really cares about advancing the interests of the state or is looking for glory in a bigger venue (that won’t happen!):

In churches and coffee shops, on conservative airwaves and right-wing social media, Alaskan voters have debated Ms. Palin’s motives in staging a political comeback — whether she’s interested in public service or in seeking more fame.

Ms. Palin, the former governor of the state and 2008 vice-presidential Republican nominee, cleared one hurdle in June when she led a field of 48 candidates in a special primary election to fill the seat of longtime Representative Don Young, who died in March as he flew home. But she faces the next test on Tuesday in a complex special election that will allow voters to rank their top choices.

Ms. Palin’s campaign did not respond to multiple requests for interviews. In a lengthy interview with The Anchorage Daily News after she announced her run in April, Ms. Palin disputed claims that she was not committed to Alaska.

“The establishment machine in the Republican Party is very, very, very small. They have a loud voice. They hold purse strings. They have the media’s ear. But they do not necessarily reflect the will of the people,” Ms. Palin told the newspaper.

I swear, if she gets elected we’ll have a trio of true loons in the House: Lauren Boebert, Marjorie Taylor Greene, and Sarah “I can see Russia from my house” Palin. (And one of them’s packing heat.) What a tribute to American democracy! (I wonder if Palin can see Russia from the House of Representatives.)

Meanwhile in Dobrzyn, Hili, the editor, sets the pace of Listy:

A: The break has ended. We are returning to work.
Hili: There is no hurry. 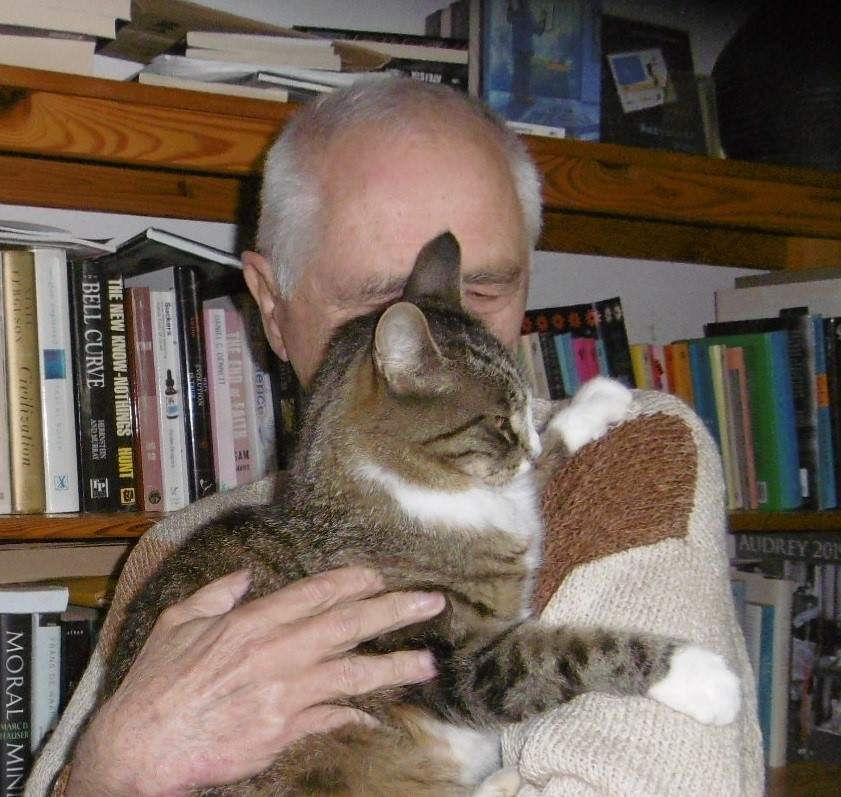 Two from Doc Bill; I can’t make out the cartoonist for this one, but it looks like “Bacon.” 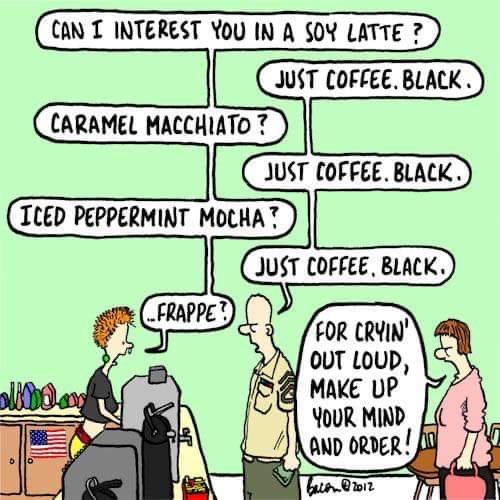 And another from Doc, and again I don’t know the source. 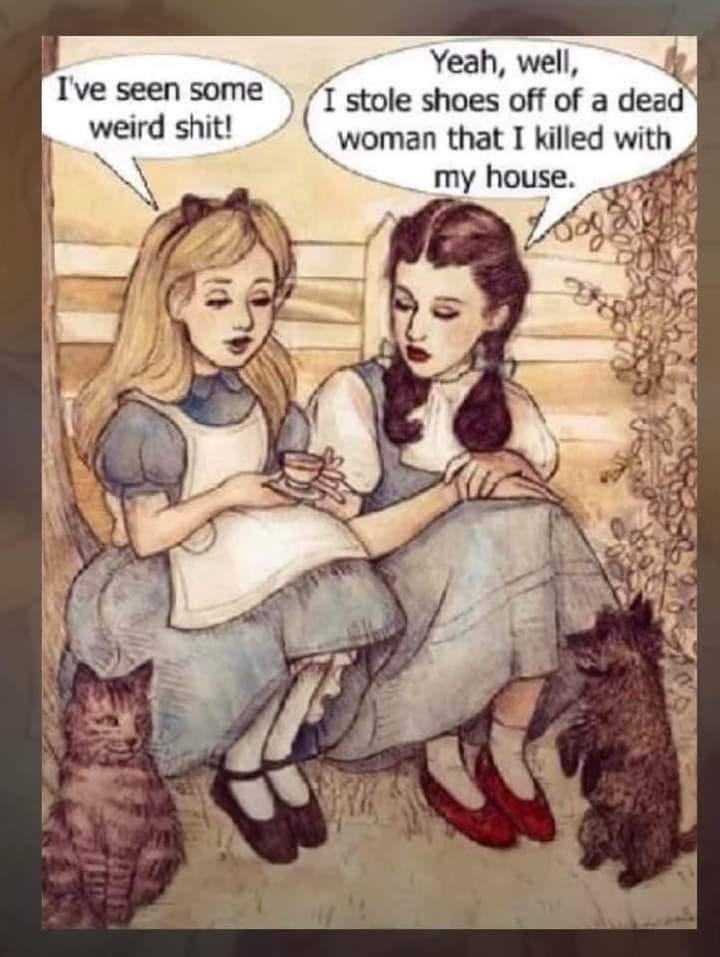 From Merilee, a cartoon by Charlie Hankin: 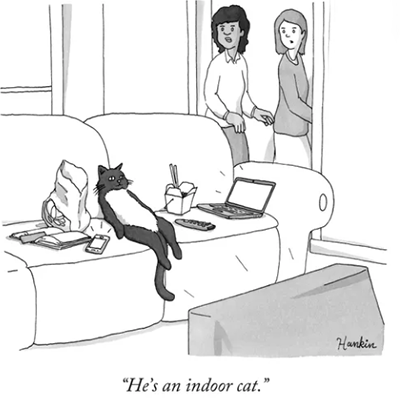 And this is why we were asked to leave. pic.twitter.com/ZhIL8j8RG4

And another I found:

found a bowling ball in the wild today pic.twitter.com/mva3CSmfx5

From Malcolm. This is a lot of work for 40 seconds of fun! (Sound up.)

Last time I tried to move an image in a word doc pic.twitter.com/sYKyIGTfWs

From Simon, an alpha cat. Note how the displaced kitty lands on all fours.

To get the best spot in the house..🐈🐾😅 pic.twitter.com/nNAqd5Qd6U

He was deported to #Auschwitz in November 1942 with his mother Klara and brother Louis. Most probably they were all murdered in a s gas chamber after the selection. pic.twitter.com/4rbX8MJMKg

Tweets from Dr. Cobb. He’s right about the first one:

Get out your rulers. These lines are all parallel and all horizontal. https://t.co/ayBEhjsM1v

A lovely video from @SoSSwifts showing the beauty of these beautiful and remarkable swiftlets reared, rescued & cared for in E Suffolk. This crew are up in the skies now & will travel to the Congo & far beyond, not landing again until breeding in say 3 years. pic.twitter.com/7qxvvST4Zl

Some brave kitties. Cobra and gator kitty are amazing. (Sound up.)

I love cats, they are very brave and there is a challenge in their nature! ❤️😂😂