Yesterday morning, thanks to Matthew, I pointed out that the Guardian had screwed up one of its biology stories, the one noted in this headline: 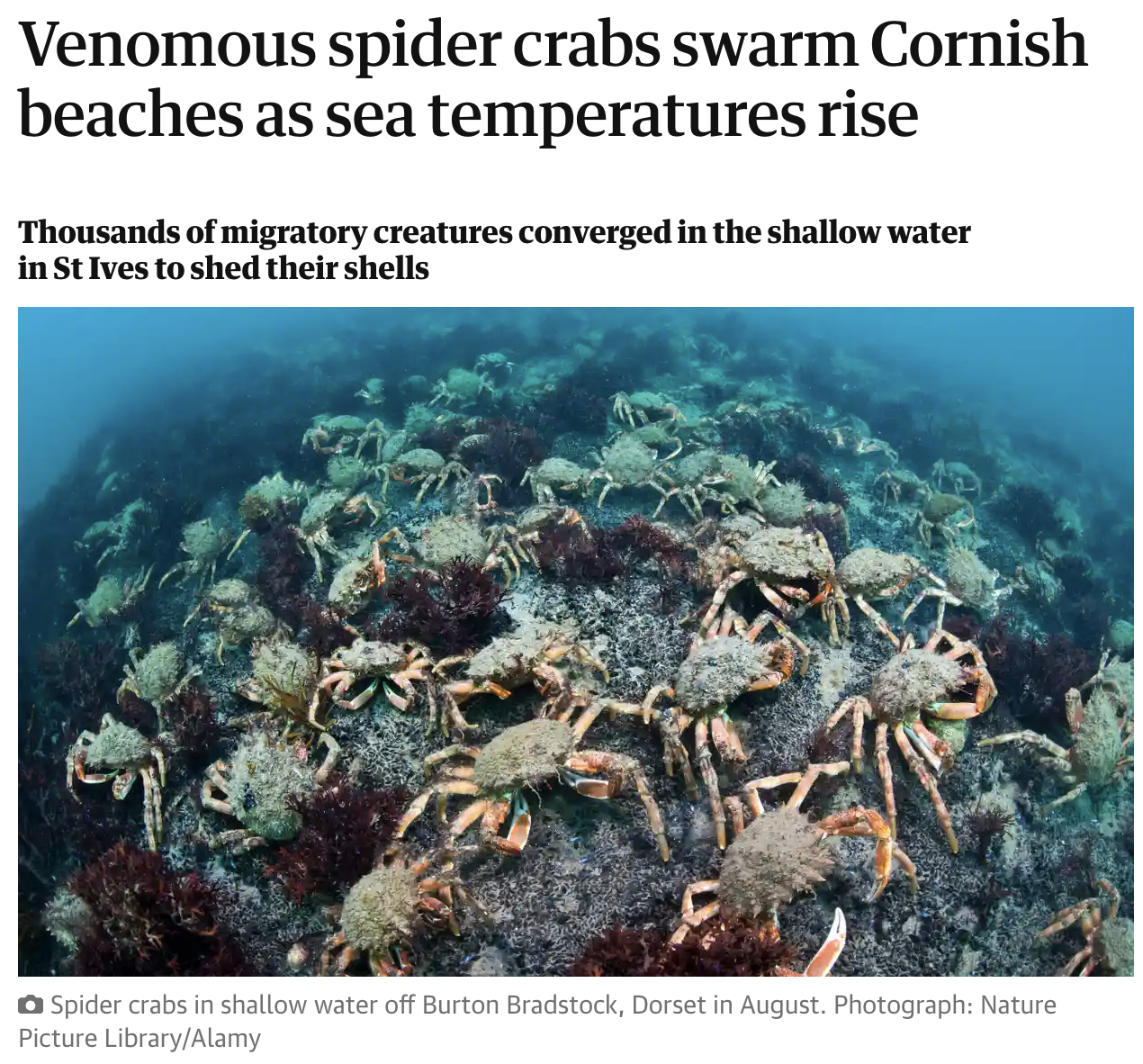 What apparently had happened is that somebody at a news service (see below) googled “crab spider” instead of “spider crab”, and concluded that spider crabs were venomous. Then the Guardian simply cut and pasted the false assertions about the spider crab—no crabs are venomous though some are toxic to eat—to create a clickbait story.

Pity, pity, because since the crabs aren’t venomous, the story loses a lot of its click-y allure.  A number of people pointed out to the Guardian that this story wasn’t exactly true (the swarming part was). Matthew also informed one of his friends who works at the Guardian (see below). Regardless, the complaints worked, and now there’s a new story sans venomous crabs. Click below to see the latest story, lacking the word “venomous”. 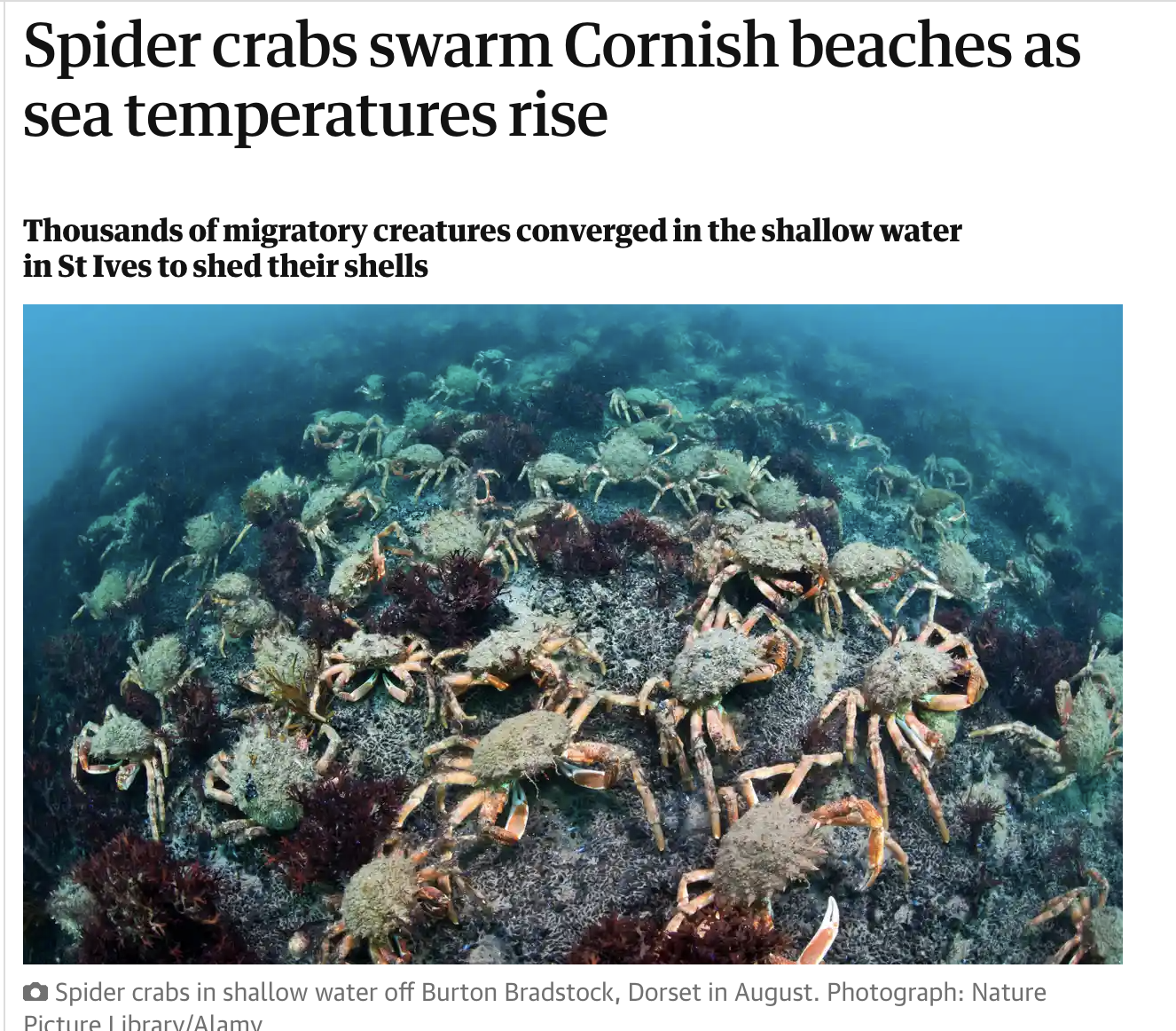 And kudos to the Guardian for noting that they changed the story. At the bottom of the new page you can read this:

This article was amended on 8 August 2022. An earlier version incorrectly stated in the headline and text that the spider crabs massing at Cornish beaches were “venomous”; no species of crab is venomous. Also, their Latin species name is Maja brachydactyla, not “Hyas araneus” as we said.

Someone else must have corrected the species name. I took the paper at its word, for Hyas araneus is the “great spider crab”. Now we learn that these un-venomous crabs are actually Maja brachydactyla, in a completely different family. Now how did they screw that one up?  By copying from another source?

Well, all’s well that ends well, except, perhaps, for the would-be bathers who avoided the waters off Cornwall.

Here’s Matthew’s email to the Guardian:

Over the weekend The Guardian website followed the rest of the UK press by printing a story about ‘venomous spider crabs’ moving into shallow waters off Cornwall to moult [https://www.theguardian.com/environment/2022/aug/06/spider-crabs-swarm-in-shallow-waters-on-cornish-beach].

Virtually all of these stories – including that in the Guardian –  claimed the crabs ‘have a venomous bite that is poisonous to their prey but harmless to humans’.

This is not true. No crab is venomous. Indeed, out of over 7.000 species of crustacean, only one is known to be venomous, and it is not a crab.

This error – which the Guardian has still not uncorrected, despite repeated alerts on social media – appears to have originated in some journalist googling ‘spider crab’  and not noticing that the pages they got back referred to ‘crab spider’. It was then simply copied by other journalists, including your own.

It is hard to know which is more disheartening: the original error, or your thoughtless repeating of it. This example does not particularly matter, but confidence in the press is a fragile thing.

The Guardian responded by saying that the false claims about venom and species name were provided by a news agency based in south-west England, and noted that they’d changed the text and added a footnote.