The new cat-themed video game, “Stray”, which I wrote about a year ago, has now been released for PlayStation 5—and apparently it’s a big hit. Here, for example, is a positive review from the Los Angeles Times (an excerpt below). (BTW, you play the cat.)

After spending nine hours with and completing “Stray” — sorry, the cat game — I can confirm the following:

“Stray” is a cat lover’s dream. Cats, those household pets that still double as the king of online memes, have of course been given the video game treatment before — narrative adventure “Night in the Woods” or mobile platform game “Super Phantom Cat” among them. And yet I can’t recall a game that treats cats, in this case a spry orange feline, with as much reverence as “Stray.” Though bearing a sci-fi dystopian setting, “Stray,” from French firm BlueTwelve Studio, works hard to capture cat movements, cat behavior and cat idiosyncrasies, even down to its themes — a mixture of loyalty, independence and personal rebellion.

The game, available for PlayStation consoles and PCs, nods to bigger-picture ideas. There are hints of a plague that wiped out humanity (thus it’s 2022 topical). Largely good-natured robots, apparently once designed to be subservient to humans, are torn between following the status quo or taking part in an insurrection. The glory of nature, and its preservation — or lack thereof — is a central fixation, as a wrecked environment has led to the creation of one-eyed mutated vermin that eat most everything in their sight, including robotic metal and furry kitty cats.

. . .playing as a cat in “Stray” is a joy. The game is mostly exploration and puzzle solving as we run around an underground city loosely modeled after Hong Kong’s fortress-like Kowloon Walled City, one where stars are digitized and nearly busted monitors play static-infused images of the outside world. The puzzles mostly involve helping the robot denizens of “Stray’s” world — finding sheet music for a busker, or trading electrical cables for a poncho. “Stray” encourages us to linger and to enjoy the cat life. Whenever our robot musician would play a song, I would instruct the game’s cat to curl up on a pillow and would set the controller down.

The Guardian rates it five stars out of five:

Stray is an excellent example of how a change of perspective can enliven a fictional setting to which we’ve become habituated. Post-apocalyptic narratives have been done to death lately, but this one feels interesting because we experience it from such an unusual point of view. Accompanied by a drone, which acts as a translator between the robots, the cat and the player, we make our way through a city sealed off from the world, trying to make it to the outside, where we belong. Stray sounds like a shallow meme – it’s the cyberpunk cat game! – but the setting and the story have substance, and at the end I honestly found it quite moving. Perhaps the least credible aspect of the whole setup is that a cat would actually be so helpful.

. . . Stray has obviously been made by cat people. Of course it has. The cat is brilliantly realistic, with her little twitchy ears, her mrrrows and purrs (which vibrate charmingly through the controller), the way she goes from soft stalk to casual lope to trotting run. Near the start of the game she dons a harness and spends the first few minutes flopping around in a state of indignant confusion that will be familiar to anyone who’s ever ill-advisedly tried to put a kitty in a Halloween costume. My eternal subquest while playing Stray was finding cosy little places to curl up for a snooze; such spots are present everywhere, on cushions, in nooks, in bookshelves, on the belly of a prone robot. There’s no point to this, in that the game doesn’t specifically reward you for it. It doesn’t reward you for digging your claws into every tempting piece of fabric you see, either, or for deliberately batting things off shelves with a little probing paw, but I did that, too. I was just enjoying being a cat.

Two thumbs up from CNN:

So we tried it out for ourselves, paying $30 to download it for a PlayStation 5. It was quickly apparent why “Stray” appeals to gamers (who like cats), people who simply like cats, and actual cats. It’s beautifully animated and offers a respite from video games that are often noisy and action-packed. Also, playing as a cat is unusual and amusing. You might even call it a-meow-zing.

Though the dystopia of the game — which mostly takes place in a city that’s falling apart — can have a mournful, solitary feel, the adventure (and the choice of main character) served as a welcome distraction from some of the dystopian headlines we have in our own world: As we played, wildfires and heat waves raged on multiple continents, but for a little while we were just a ginger cat wandering around a strange city.

BlueTwelve’s passion for felines is echoed by consumers, who have taken to “Stray” like catnip. It’s among the most popular games on Steam, one of two platforms where it is available — nearly 50,000 people played it on Thursday, just two days after it launched, and over 21,000 of those who bought the game from Steam left “Overwhelmingly Positive” reviews.

“If you want to be a cat, playing Stray is the next best thing,” one review read.

Here’s the game’s home page with videos; the assessment by about 52,000 readers is “overwhelmingly positive”.

Now of course you want to see some of it. Here are the first 23 minutes:

And here’s a guy playing it for five hours!

I’m sure that at least a couple readers (or their kids) will get this game. If you do (it’s not expensive), please report in.

A cat got loose in Boston’s Logan airport; the upshot is reported in this article in the Mainichi, a Japanese paper in English (click on screenshot to read):

“Whether out of fatigue or hunger we’ll never know, but this morning she finally let herself be caught,” an airport spokesperson said of the cat named Rowdy in a statement.

That cat has an appropriate name. More:

Rowdy was given a health check and will be returned to her family.

“I’m kind of in disbelief,” said her owner, Patty Sahli. “I thought, ‘What are the odds we’re actually going to get her back?’ But I got a call this morning and I am just so shocked.”

Rowdy’s time on the lam began June 24, as Sahli and her husband, Rich, returned to the U.S. from 15 years in Germany with the Army. When their Lufthansa flight landed, the 4-year-old black cat with green eyes escaped her cage, in pursuit of some birds.

Soon Rowdy herself was on the receiving end of a chase, as her getaway set off a massive search involving airport and Lufthansa personnel, construction workers, and animal welfare advocates, as well as the use of wildlife cameras and safe-release traps.

Despite numerous sightings, Rowdy always eluded her pursuers — but now, a little calm has been restored.

“It was such a community effort,” said Sahli, who is originally from New Hampshire and is moving to Florida. “We’re just so grateful to everyone who helped look for her.”

And a photo of Rowdy: 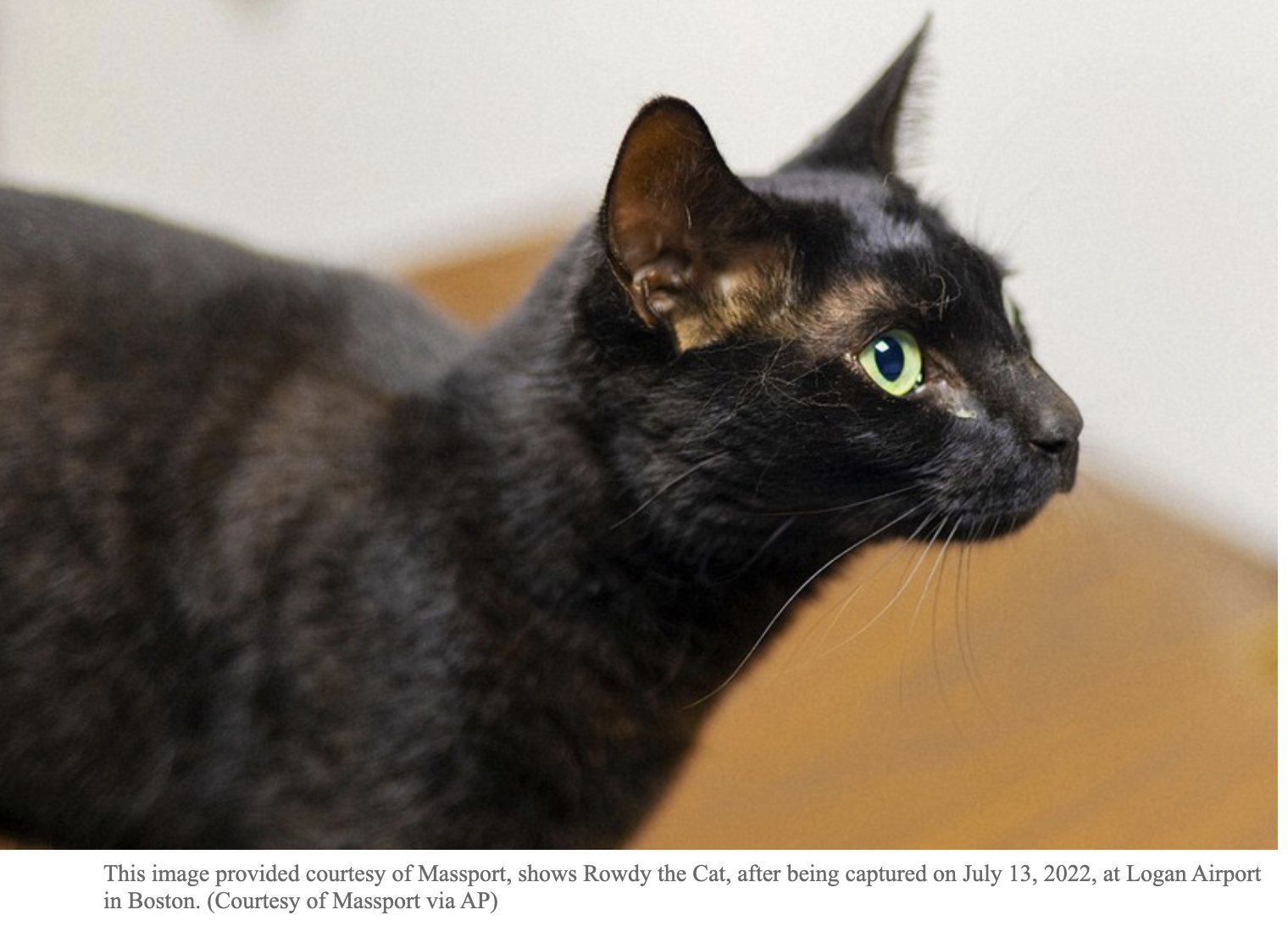 Here’s a report of a rescue cat who becomes not only friendly, but needy and demanding. It’s from The Dodo; click on the screenshot to read:

Charlie is a 16-year-old rescue tabby who demands to be “spooned”.

“At the beginning of the year, I returned home from an extended period away due to work,” Conor Coley, Charlie’s dad, told The Dodo. “The first night since I returned, he insisted on being spooned.”

Since that night, the elderly tabby’s favorite part of the day is when he gets to be little spoon.

(All photos by Conor Coley): 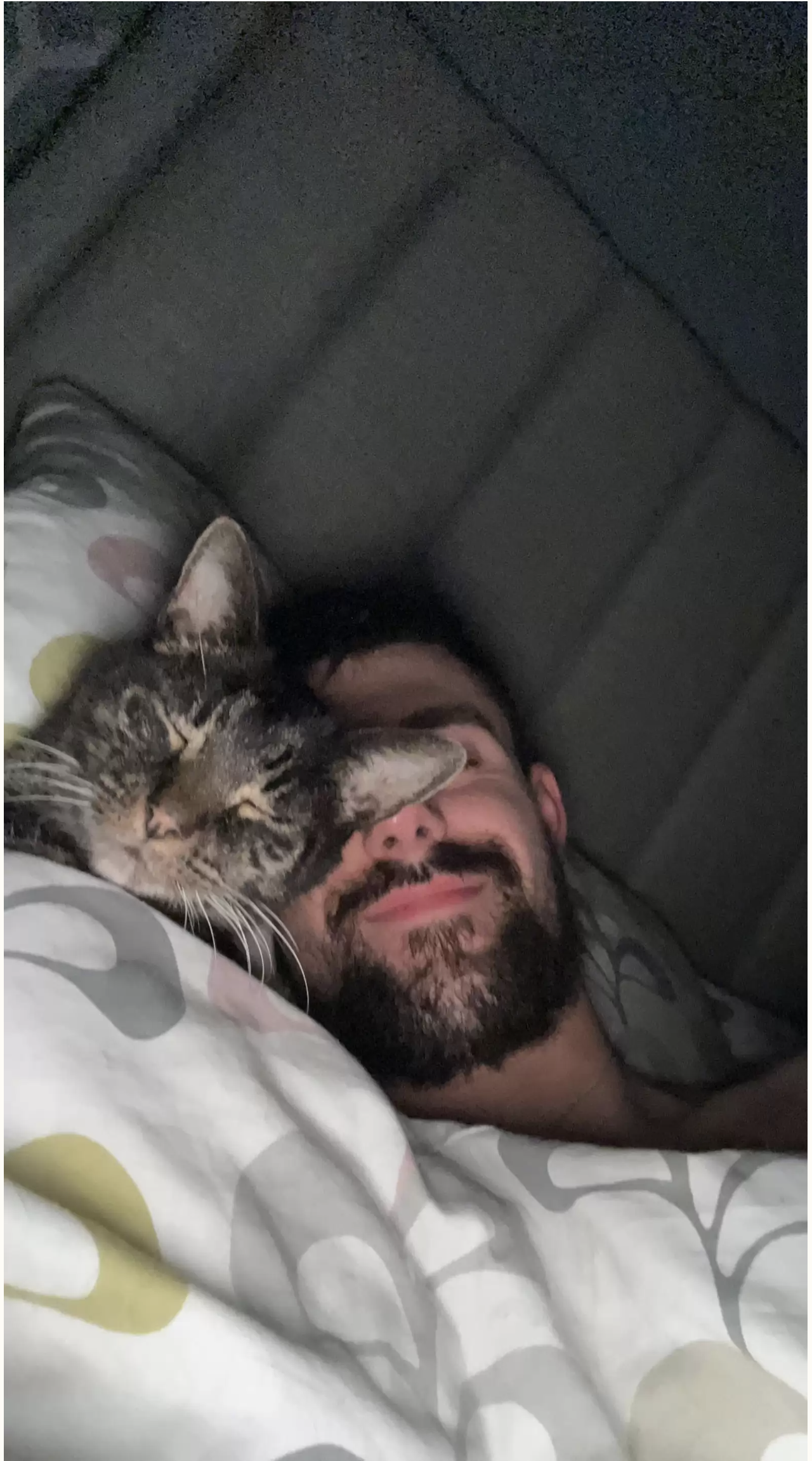 Charlie always loved sleeping on the bed because it’s his dad’s special place and he wanted to be a part of that.

“He will enter my room every night at around 10 p.m.,” Coley said. “If I am already in bed he will force his way under the covers, and if I am not in bed, he will sit exactly where I sleep and meow until I go to bed.” 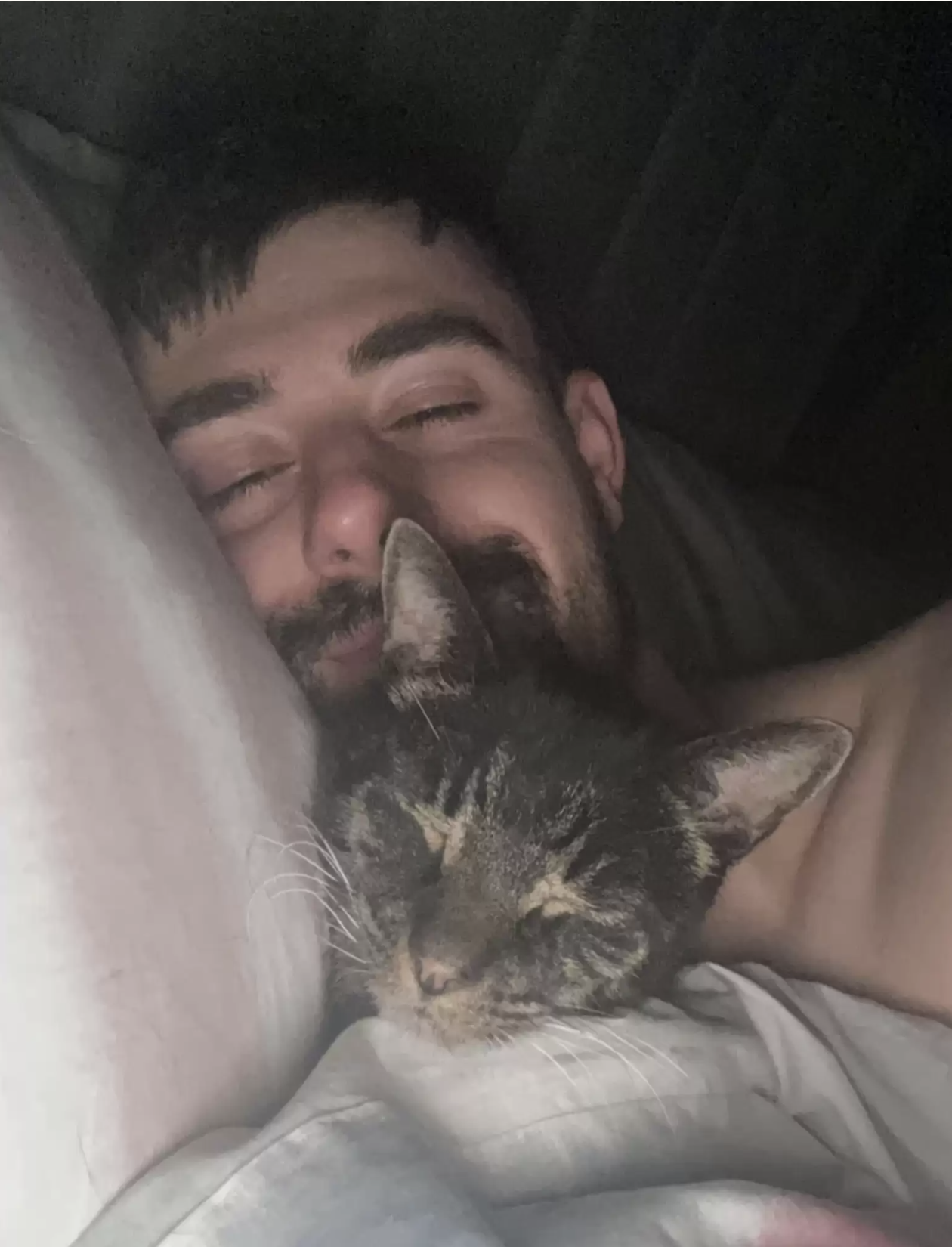 Coley rescued the “extremely laid-back” cat eight years ago, noting that Charlie happily lays [sic] in the sunshine until it’s time to snuggle.

“He purrs immediately when I enter the room,” Coley said. “Most nights he will spend the entire night, except for the occasional trip for water. In most cases, he will return promptly and gently pad me awake to let him back into the spoon.”

. . .At 16 years old, Charlie knows how to get the attention he wants and deserves.

“If he wants your attention, he’ll meow the house down,” Coley said.

It’s OK, though. Coley loves their routine — and relationship.

“Charlie has been a rock in my life and also my partner,” Coley said. “He is always there when you need him, and it takes away the struggle of a hard day when he comes in purring for a snuggle.” 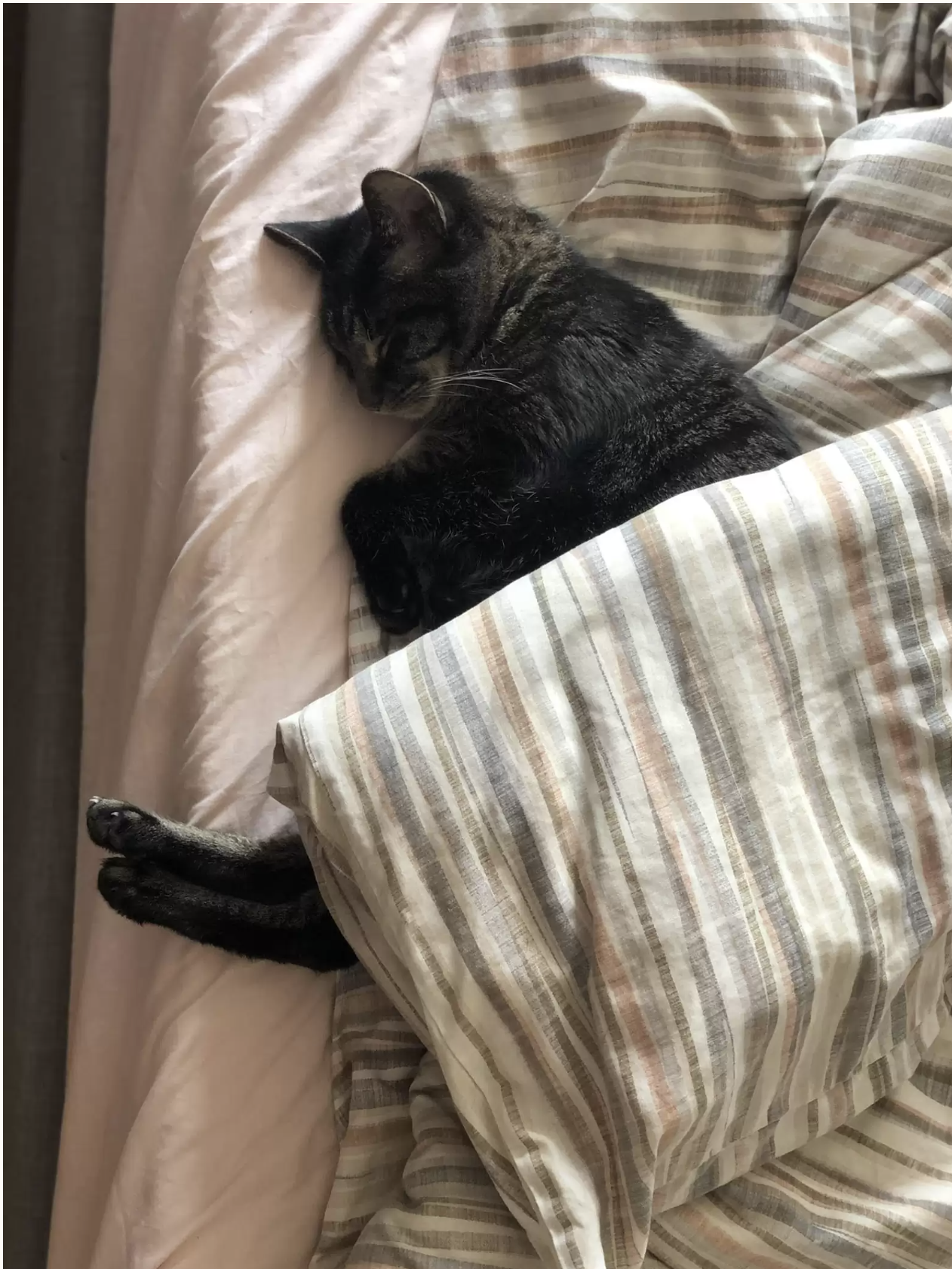