Every day, it seems, I hear that “races have no biological reality or meaning; they are purely social constructs.” And that statement is somewhat misleading, for even the crudely designated races of “white, black, Hispanic, and East Asian” in the U.S. are, as today’s paper shows, biologically distinguishable to the point where if you look at the genes of an unknown person, you have a 99.86% chance of diagnosing their self-identified “race” as one of the four groups above. That is, if you ask a person how they self-identify as one of the four SIRE groups (SIRE: “self identified race/ethnicity), and then do a fairly extensive genetic analysis of each person, you find that the groups fall into multivariate clusters.

More important, there’s little deviation between one’s SIRE and which genetic cluster they fall into. Over 99% of people in the sample from this paper can be accurately diagnosed as to self-identified race or ethnicity by looking at just 326 regions of the genome.

This in turn means that there are biological differences between different SIREs, so race cannot be simply a “social construct.” This is in direct contradiction between the extreme woke view of “race”, as expressed in the Journal of the American Medical Association, a statement I discussed in an earlier post:

Race and ethnicity are social constructs, without scientific or biological meaning.

Nope, and we’ve known that statement is wrong for nearly 20 years. Of course, if you take “biological meaning” as “data show that there are a finite number of distinct groups with huge genetic differences”, then it is a correct statement. But nobody thinks that any more except for racists or those ignorant of modern population genetics in humans.

The meaning of the biological reality adduced in papers like the one we’re discussing today is this: genes can be used to diagnose biological ancestry, which is surely involved in one’s SIRE. And therefore “races” or “ethnicities” aren’t just made-up groups, but say something about the evolutionary origin of group members.

This view of human variation leads me to abandon the use of the word “race” in general and use “ethnicity” instead. I’ll use “race” in this article, though, as I’m addressing the JAMA statement above, and also using individuals’ own diagnosis of their own “race”.

I’ve emphasized this before—in August of last year. There I cited the 2002 paper of Rosenberg et al. reporting that “one can show by using data from many genes and gene sites, and clustering algorithms, that humanity can be shown to form genetic clusters that correspond to geography (different continents or subcontinents), which of course correspond to evolutionary history.” As I also said then,

. . . . the paper of Rosenberg et al.,. . .  shows that the genetic endowment of human groups correlates significantly with their geographical location (for example, if you choose to partition human genetic variation into five groups (how many groups you choose is arbitrary), you get a pretty clear demarcation between people from Africa, from Europe, from East Asia, from Oceania, and from the Americas. (To show further grouping, if you choose six groups, the Kalash people of Asia pop up). This is one reason why companies like 23 And Me stay in business.

This association of location with genetic clustering (and these geographic clusters do correspond to old “classical” notions of race) is not without scientific meaning, because the groupings represent the history of human migration and genetic isolation. That’s why these groups form in the first place. Now you can call these groups “ethnic groups” instead of “races”, or just “geographic groups” (frankly, you could call them almost anything, though, as I said, I avoid “race”), but they show something profound about human history. The statement in bold above could be used to dismiss that meaning, which is why I consider that statement misleading.

The Rosenberg et al. paper was published two decades ago, and since then we are now able to look at more genes (potentially the entire genome of individuals) and use bigger samples over smaller areas. When we do that, we’re able to see the clusters within clusters. Here’s a reference to a 2008 paper:

Even within Europe,a paper by Novembre et al. reported, using half a million DNA sites, 50% of individuals could be placed within 310 km of their reported origin and 90% within 700 km of their origin.. And that’s just within Europe (read the paper for more details). Again, this reflects a history of limited movement of Europeans between generations.

I wanted to delve a bit into the 2005 paper of Tang et al. (mentioned in my earlier post), because it concentrates on self-reported race or ethnicity, not geographic origin, but also looks at variation over space. geography. Click on the title below to read the paper (pdf here and reference at bottom).

Tang et al. got their data from a study of hypertension in which individuals gave blood and also indicated their self-identified race as one of the four groups mentioned above. Then, each of the 3,636 individuals (taken from 15 geographic locales in the U.S., and three from Taiwan) were analyzed for 326 “microsatellite” markers—short repeated segments of DNA. (These segments may not all be independent because of genetic linkage, but certainly a lot of them are independent. The authors don’t discuss this issue, which is relevant but not invalidating.)

Tang et al. then determined whether the microsatellite data fell into clusters using on multiple genes and the clustering algorithm “structure”—the method also used by Rosenberg et al. to show ethnic variation was correlated with geography. Remember, the Tang et al. study took place mostly in American populations, with each SIRE sampled from several places. But the geographic sampling within the U.S. was limited (e.g., “Hispanics” came from only one place in Texas), and this is a potential problem. 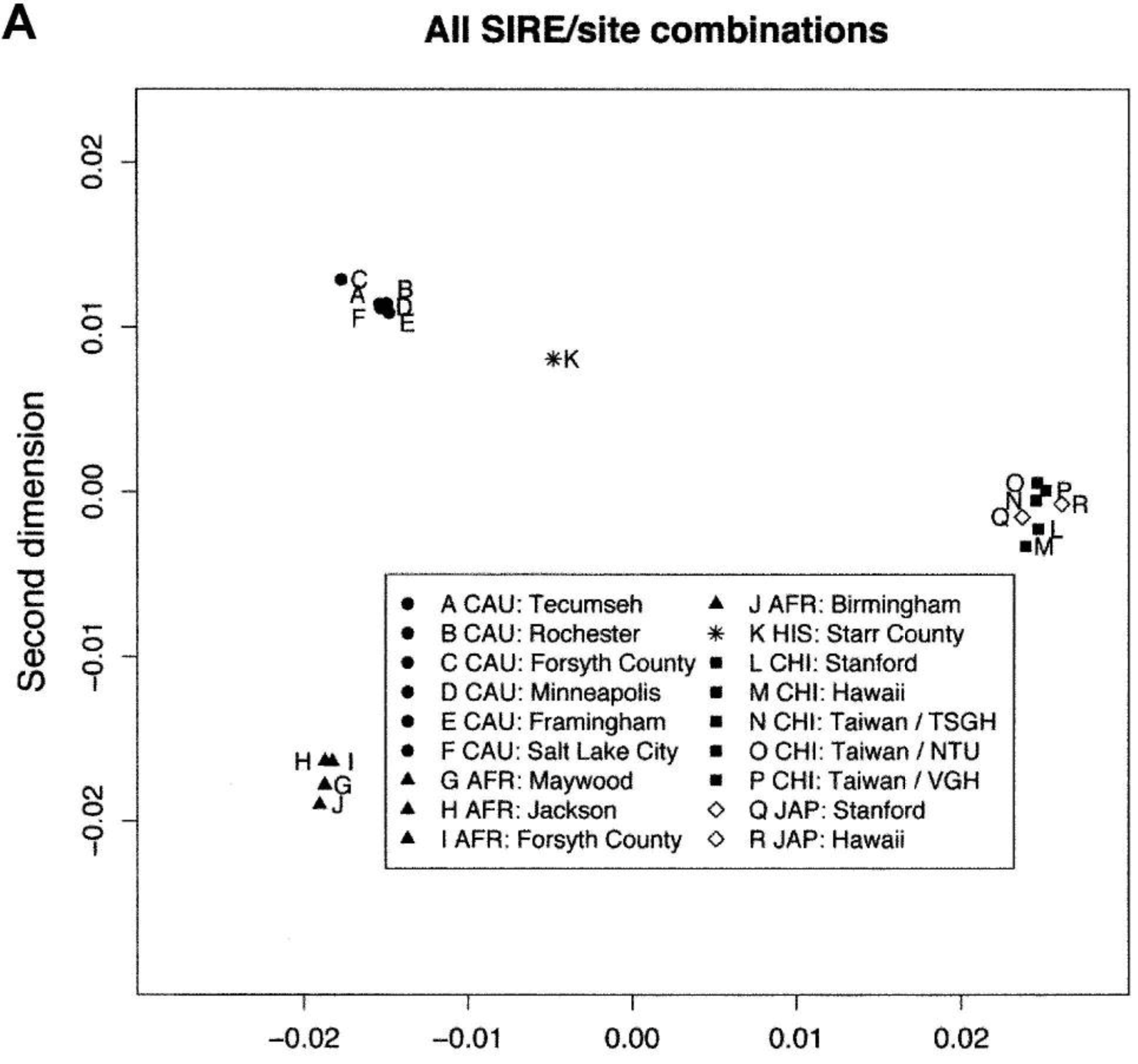 The clusters are pretty distinct. Not only do are they distinct, but they match almost perfectly an individual’s self-identified race or ethnicity. As the authors note:

Of 3,636 subjects of varying race/ ethnicity, only 5 (0.14%) showed genetic cluster membership different from their self-identified race/ethnicity. On the other hand, we detected only modest genetic differentiation between different current geographic locales within each race/ethnicity group. Thus, ancient geographic ancestry, which is highly correlated with self-identified race/ ethnicity—as opposed to current residence—is the major determinant of genetic structure in the U.S. population.

As I said earlier “there is almost perfect correspondence between what “race” (or ethnic group) Americans consider themselves to be and the genetic groups discerned by cluster algorithms.  Because these are Americans, and move around more, the genetics reflect ancestry more closely than geography, though, as Novembre et al. found, in Europe geographic origin is also important. Americans move around more than Europeans do!I

In other words, individuals within a cluster are more geographically dispersed than what Novembre et al. found, so that membership in a cluster indicates ancient ancestry, not geographic origin. For example, members of the “East Asian” cluster come from Taiwan, Hawaii, and Stanford.

But to show that there are clusters within clusters, so that “East Asian” can’t be considered a “race” in the old sense, the authors repeated the cluster analysis using only the East Asian sample, and found that those of Chinese ancestry formed a cluster distinct from those of Japanese ancestry.  This is expected if self-identified ethnicity still reflects genetic differences that evolved in Asia. You would doubtless find similar relationships if you dissected Caucasians or African-Americans by the location of their ancestors.

What this shows, then, is that in the US, and in a limited sample of populations whose members self-identified their “race” into one of four groups, those groups can be differentiated using multiple segments of the genome. Not only that, but the differentiation is substantial enough that if you had an individual’s genetic information without knowing anything about them, you could diagnose their “self identified race/ethnicity” with 99.86% accuracy.

In the U.S.—and in the world if you look at the Rosenberg study—one’s self-identified race, or race (again, I prefer “ethnicity”) identified by investigators—are not purelysocial constructs. Ethnicity or race generally say something about one’s ancestry, so that those members of the same self-identified race tend to group together in a multigenic analysis.

Note that this does not mean that there is extensive genetic differentiation between self-identified races. The old conclusion from my boss Dick Lewontin that there is more variation within an ethnic group than between ethnic groups remains true. But there is enough genetic difference on average that, if you lump all the genes together, the small differences accumulate sufficiently to allow us to diagnose a person’s self-declared race. Remember, these are “self-declared” groupings, so you can’t say they are imposed on the data by investigators. (That of course doesn’t mean that they aren’t social constructs. They may be in some sense, but they’re also social constructs that contain scientific information.)

So, the big lesson is that the JAMA was wrong: if races/ethnic groups can be diagnosed with over 99% accuracy by using information from many bits of the genome, then the statement “Race and ethnicity are social constructs, without scientific or biological meaning” is simply wrong. Race and ethnicity, even when diagnosed by individuals themselves, do have scientific biological meaning: namely, they tell us about an individual’s ancestry and where their ancestors probably came from. This is true in the U.S. (this paper) or worldwide (the Rosenberg et al. paper). Further, if you look on a finer scale, as Novembre et al. did, you can even diagnose what part of Europe a European’s ancestors came from (it’s not perfect, of course, but it’s pretty good).

This is not a new conclusion, and the papers I’ve cited are older ones.  There may be newer ones I haven’t seen, but I’d be willing to bet that their results would be pretty much the same as that above. Though genetic differentiation between groups is not large, it’s sufficient to tell us where they came from, confirming that geographic origin (reflecting ancient geographic isolation) is the source of what we call ethnic or racial differences.

Just remember this: when you hear that human race/ethnicity is a purely social construct, and doesn’t say anything about biology or evolution, that’s just wrong.

I shouldn’t have to point out that these genetic differences in no way buttress racism, for we don’t even know what they mean in terms of individual traits. But they do give us insights into evolutionary history. And that is something of scientific and biological meaning.

45 thoughts on “Once again: are “races” social constructs without scientific or biological meaning?”