Today’s batch of photos comes from our regular contributor Mark Sturtevant. His narrative and IDs are indented, and you can enlarge the photos by clicking on them.

These are pictures of spiders and insects that were taken a couple summers ago near where I live (in Michigan).

To begin, here is a dead Syrphid fly. Can you spot the reason for its demise? I will just say that Misumenoides sp. is the reason. 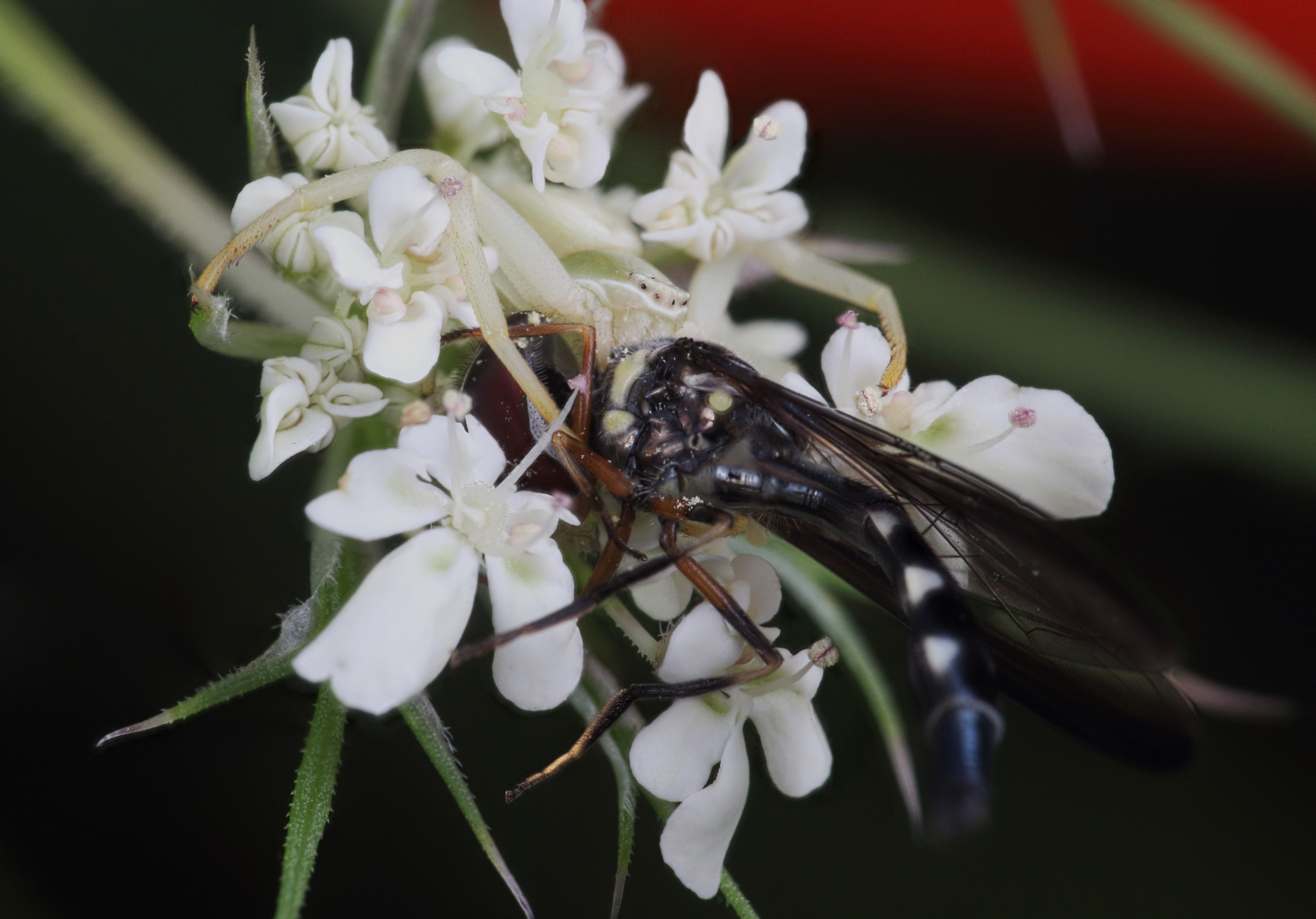 Next up are some local tiger beetles. These interesting predatory beetles can be a bit of a challenge to photograph, although patience and some luck can bring results. What helps is they soon forget what disturbed them, so if one lies in wait they can wander back and even crawl on you. The first is a twelve-spotted tiger beetle (Cicindela duodecimguttata), a new species for me. 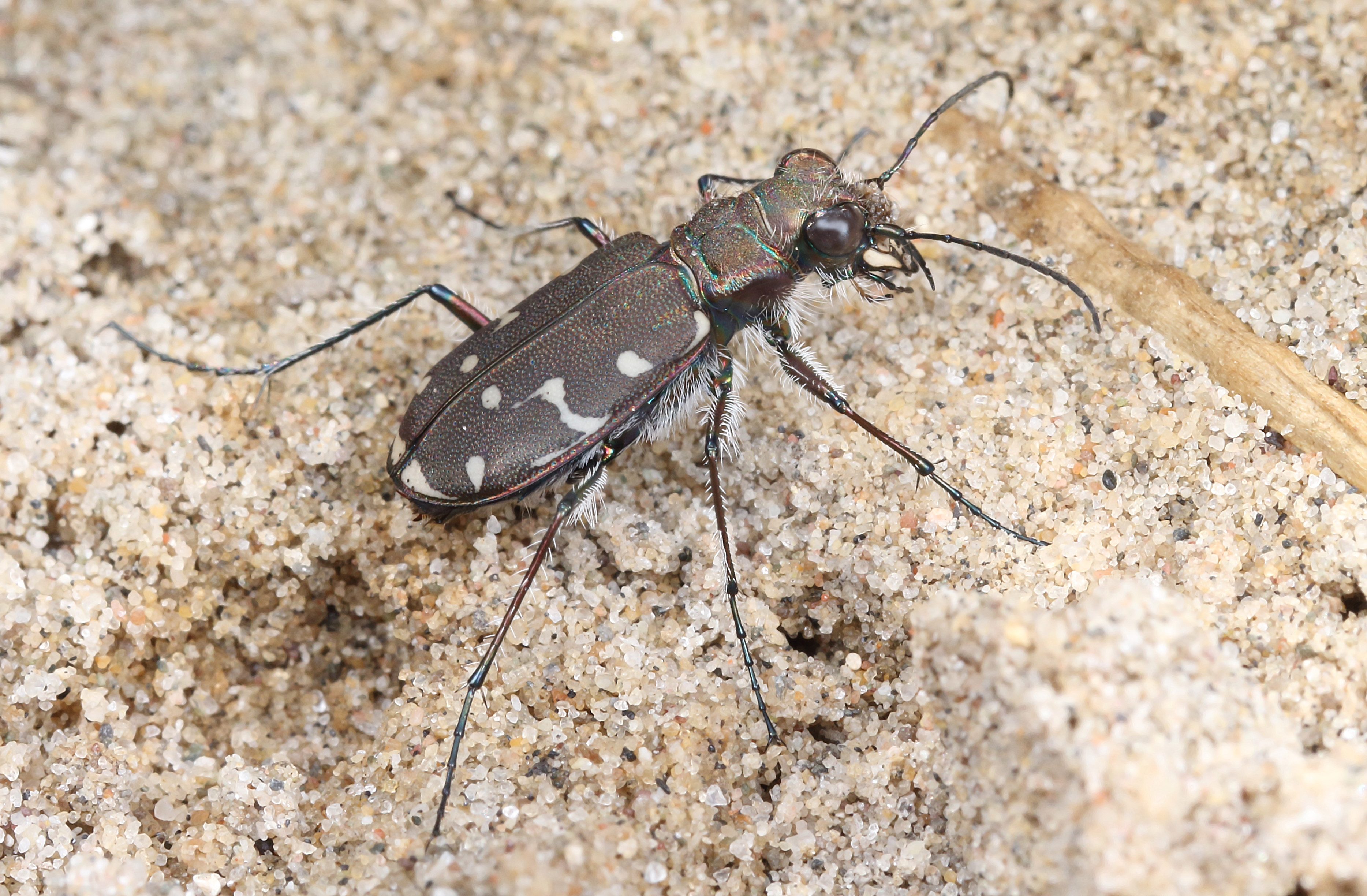 Next is our spectacular festive tiger beetle (Cicindella scutellaris). I think these may be our easiest tiger beetle to photograph. This is a focus stacked picture. 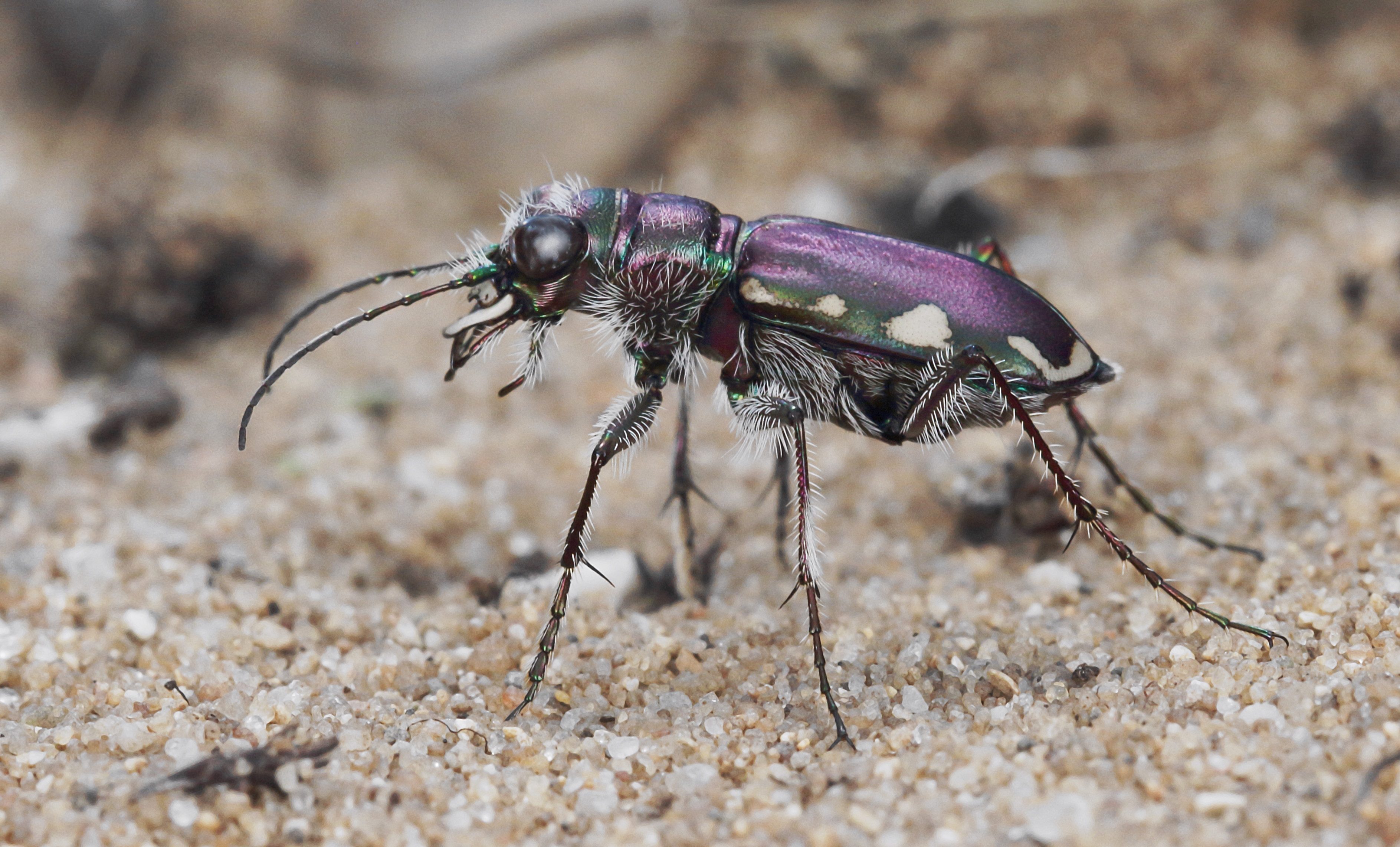 And finally, here is a big sand tiger beetle (Cicindela formosa). I can’t identify its prey. 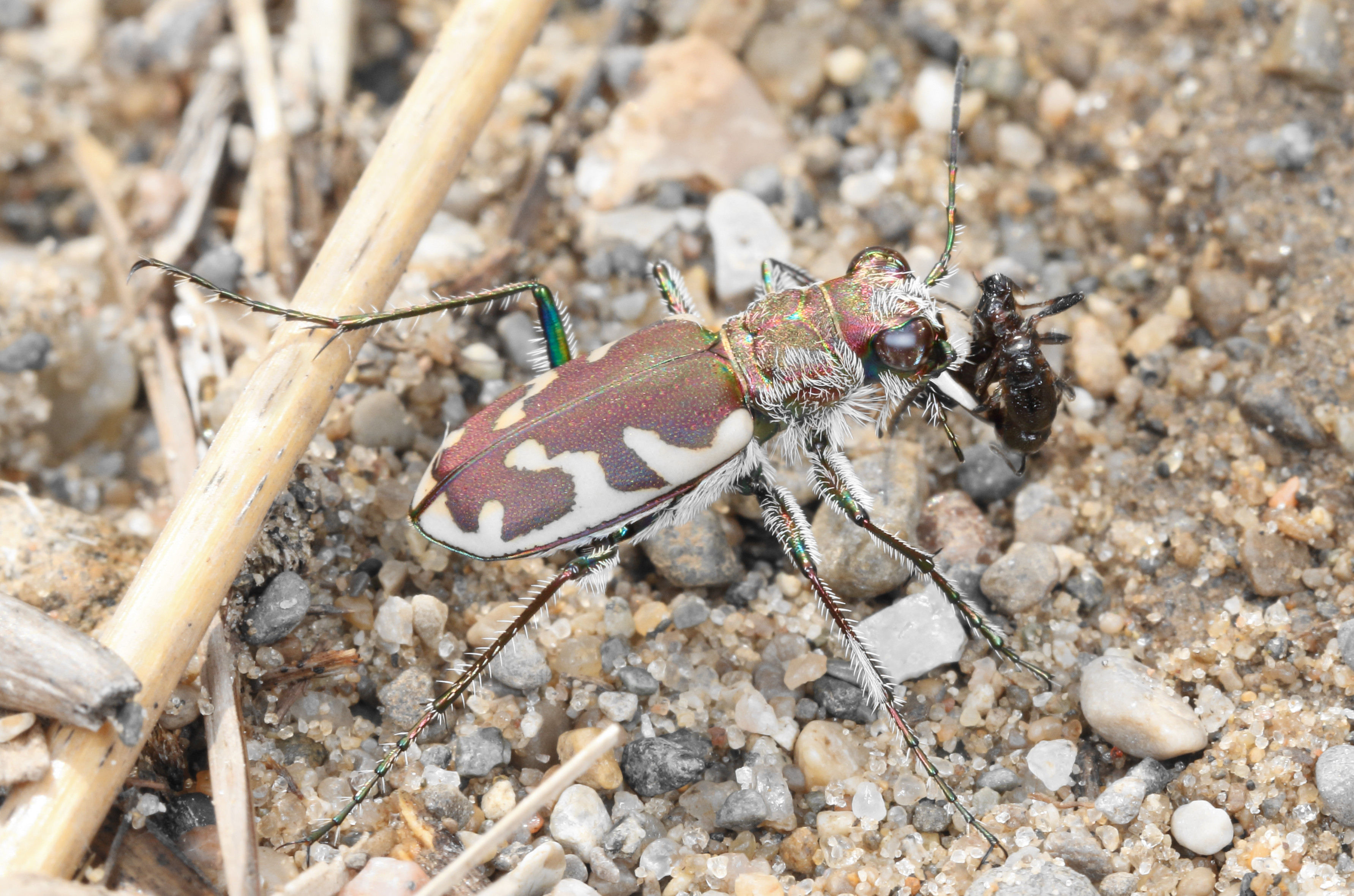 There is an interesting new park that I visit, with no fewer than three species of carnivorous plants (more on those later). An isolated sandy beach in the park is quite a hot spot for tiger beetles as well as for burrowing wasps that paralyze various prey to feed their next generation. One of the largest of these wasps is the thread-waisted wasp (Ammophila procera), and here is one with a caterpillar. I think the caterpillar is a walnut caterpillar, Datana integerrima). The wasp had managed to get her prey completely stuck between some rocks, so I freed it for her. She snatched it up out of my hand, and then I took this picture. 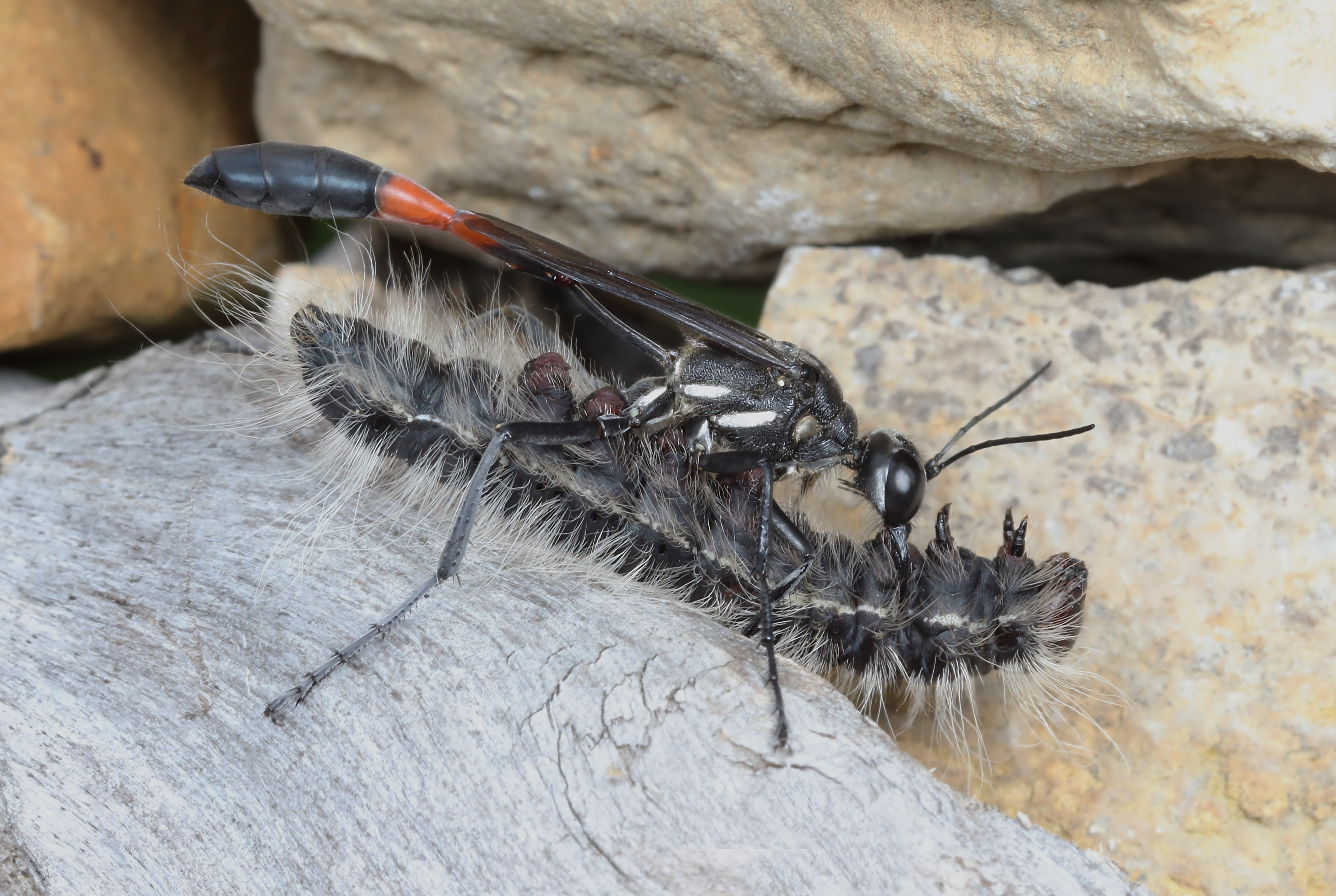 Her burrow was nearby. As is typical of their kind, its entrance was filled in to conceal it. She put down the caterpillar at the entrance (they somehow know where it is), unplugged the burrow, and then hauled the caterpillar inside. The next sequence of pictures were taken in great haste, but it helped that the fuzzy caterpillar was a snug fit. 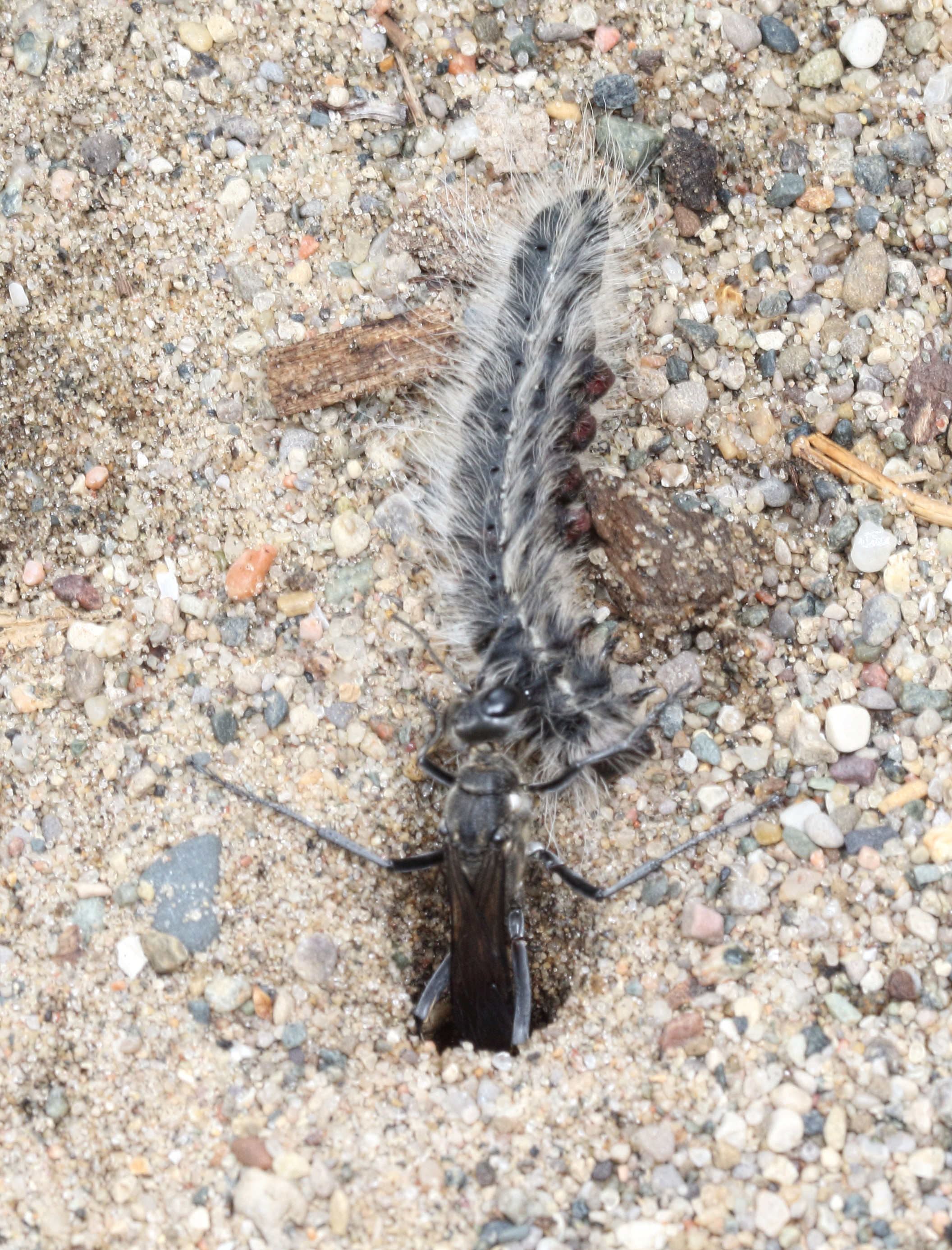 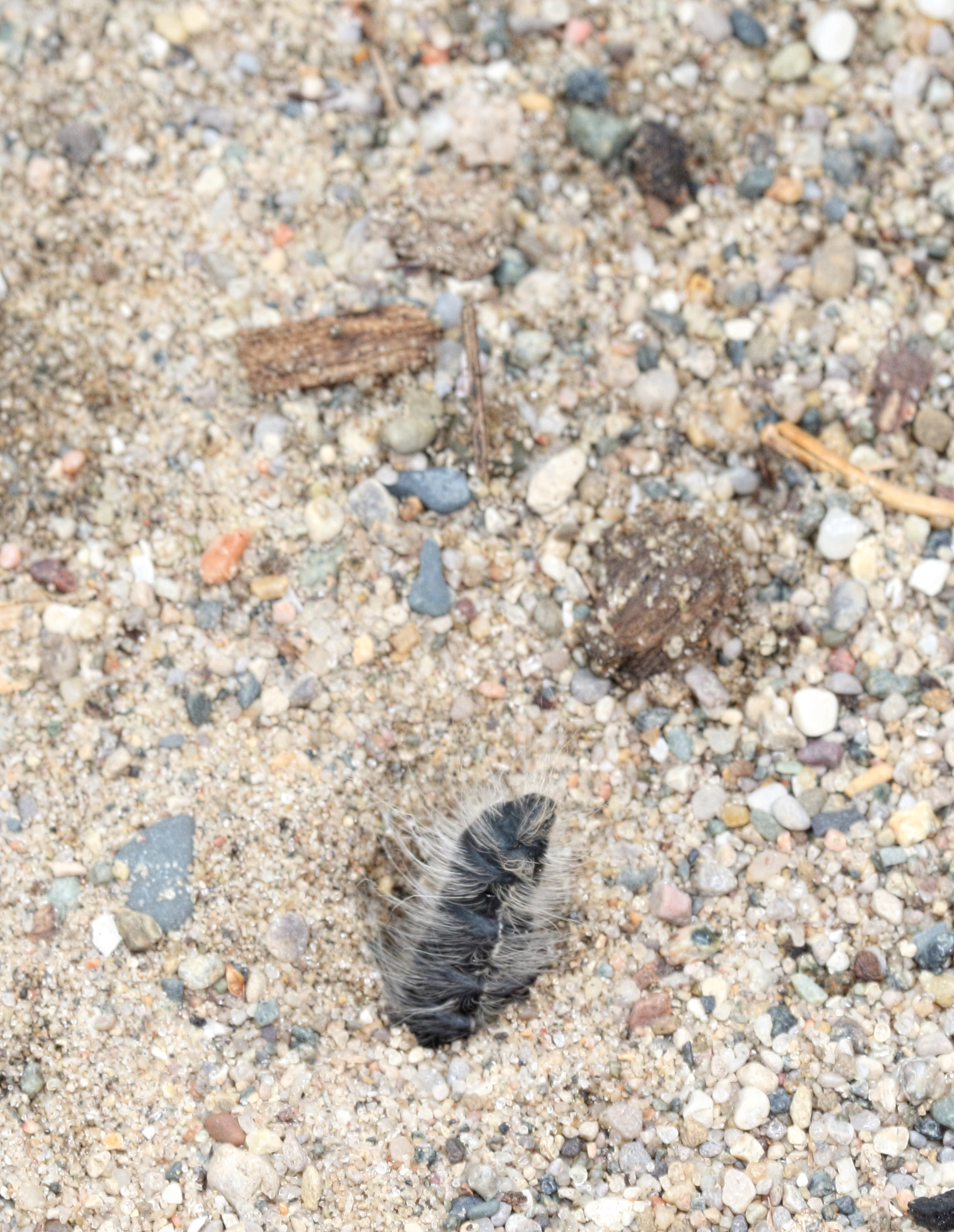 After a time, the wasp re-appeared and industriously covered up her burrow entrance. She then flew off to look for more caterpillars, since there will be several chambers, each with young, to provision in this one burrow. 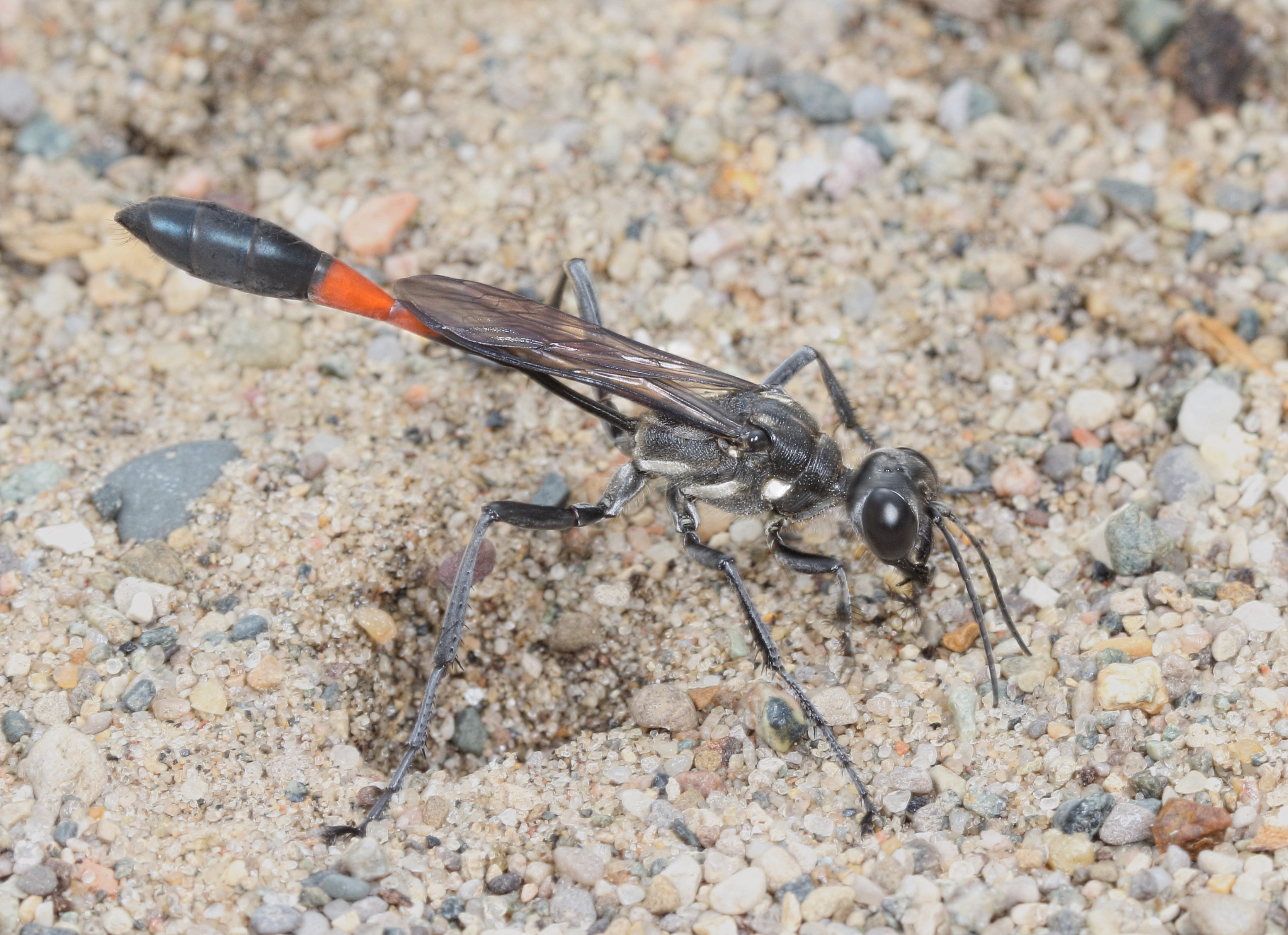 Finally, I had spent some time getting to really know the funnel web spiders in the yard. Spiders from different families around the world have this name, since the characteristic sheet-like web with a tunnel retreat has been invented more than once. Our funnel web spiders are from the family Agelenidae, where all species build these kinds of webs. The one shown here is Agelenopsis sp. She had built her web at the top of a large weed, so it was a simple matter to take off the top and set it in a bowl on the dining room table for a focus stacking session. If she was spooked, she would just duck into her retreat rather than run off somewhere. It was a nice arrangement. 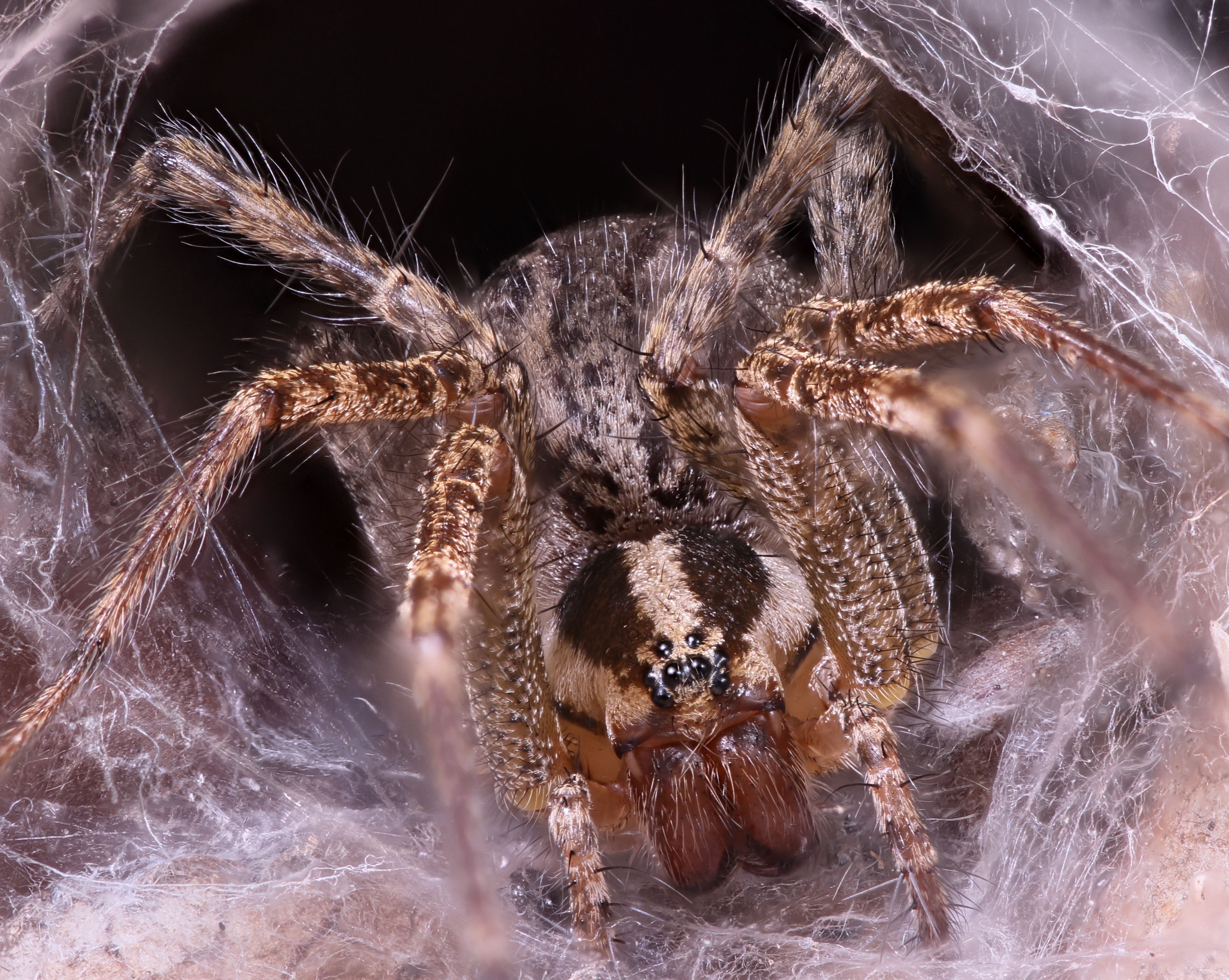 At night, funnel web spiders are easy to find because their eyes produce a reflective eye shine from flashlights. So the last two pictures are of the same spider, taken in the dark except for with this kind of illumination. It took some fiddling to get eye shine to appear while up close, although the effect is super obvious from a distance. 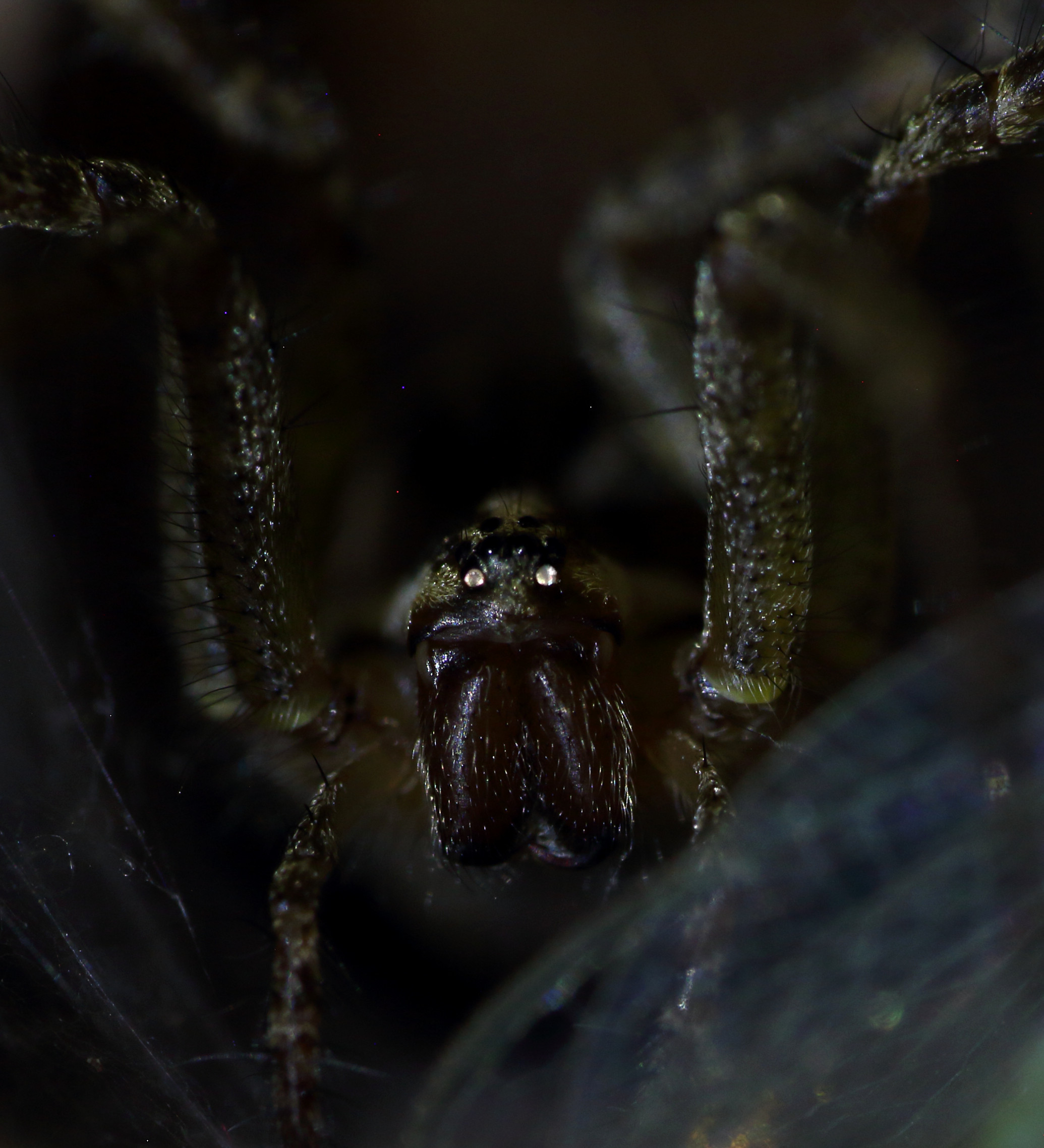 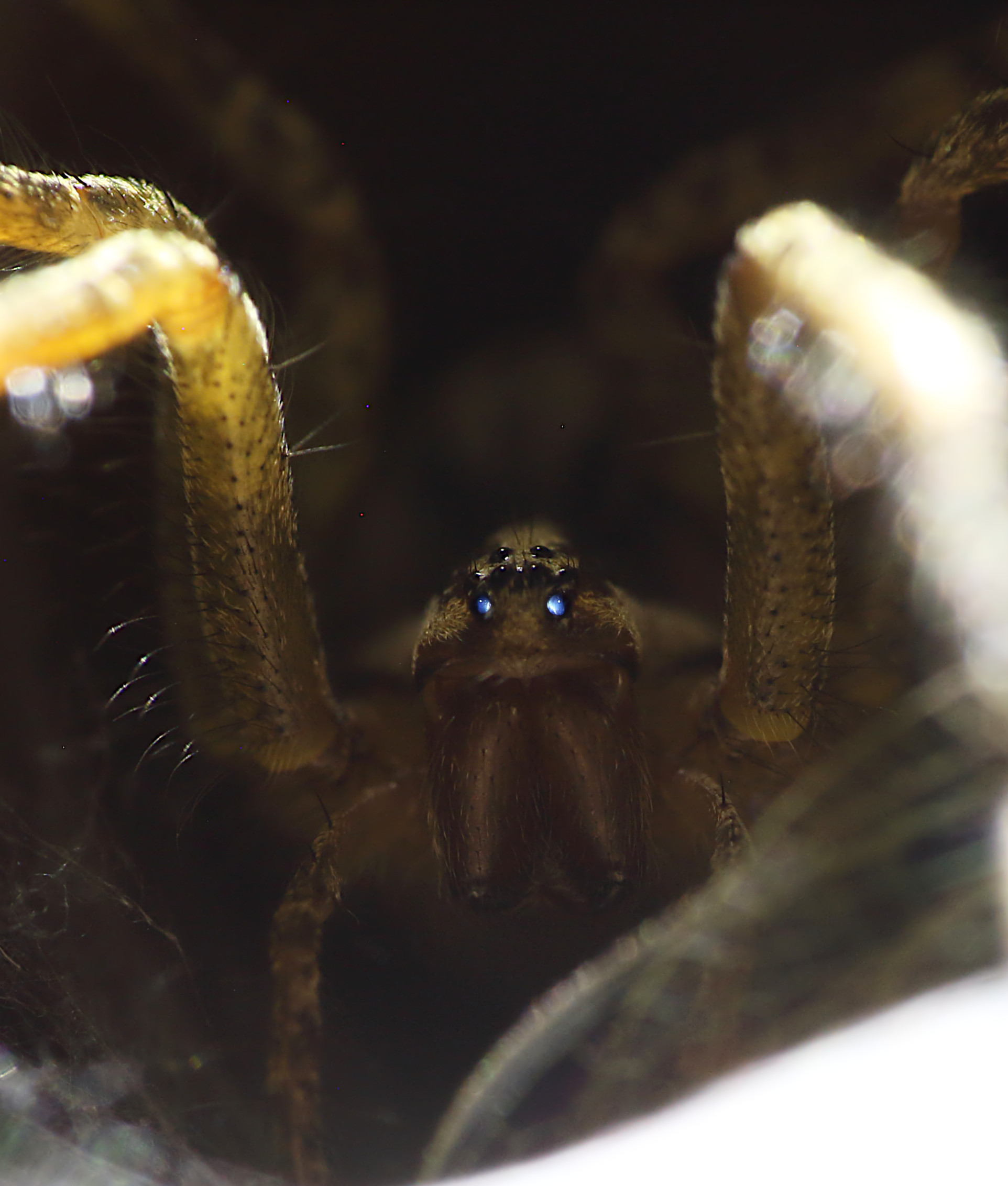 Although the spider was a total sweetheart to work with, I am here reminded of Shelob, the giant spider in Lord of the Rings: “There age-long she had dwelt, an evil thing in spider form…”

Mark also sent a photo of a  “blonde mallard”, which is leucistic (the result of a mutation) and clearly a female. (One site says that in mallards the phenomenon is nearly always seen in hens rather than drakes, though I don’t know why.) 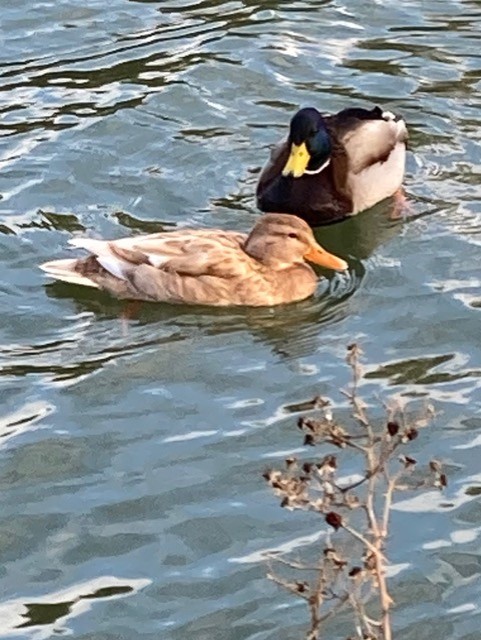