While “land acknowledgments”—in which organizations admit that they’re operating on land stolen from indigenous people—are becoming quite common, I have no truck with them. They are paragons of Woke virtue signaling: an admission that one’s predecessors did wrong, but are never accompanied by reparations or attempts to give the land back. In other words, you talk the talk but don’t walk the walk.

Sociologists of the future will have a field day analyzing the epidemic of these claims, many of which are historically inaccurate and all of which are groveling and patronizing (i.e., land was “stolen” sequentially several times before now). At any rate, if all you do is indict your institution for stealing land, I don’t take you seriously, for it’s dead easy to remind people of a bad history without rectifying it (and you can rectify it by paying the group from which you stole the land or, better yet, giving back the damn land).

Yesterday the Wall Street Journal reported on Stuart Reges, a professor of computer science at the University of Washington (“UW”; a public university), who struck back at land acknowledgments by posting a deviation from the officially recommended claim on his syllabus. For that he was disciplined, and now he’s suing UW for violating his freedom of speech:

Stuart Reges, who has taught at the university since 2004, claims in the suit that administrators are discriminating against him because of his viewpoint challenging Native Americans’ historic ownership of the land, and are using an unconstitutionally broad speech policy to pursue disciplinary action against him.

The university in 2020 included on a list of best practices for diversity a suggestion that faculty add a “land acknowledgment” to their course syllabi and offered recommended language: “The University of Washington acknowledges the Coast Salish peoples of this land, the land which touches the shared waters of all tribes and bands within the Suquamish, Tulalip and Muckleshoot nations.”

This is close to being compelled speech, for if you deviate from that exact statement, you can get in trouble. And you can get in extra big trouble, as did Reges, if you make up your own land acknowledgment:

In other words, Mr. Reges says, citing philosopher John Locke’s theory that those who improve upon land own it, the Coast Salish people historically owned nearly none of the campus land.

Reges was then asked by an administrator to remove the statement from his syllabus as “offensive” and creating a “toxic environment”. (It would have made me investigate Locke.)  As it was an introductory course with several sections,the punishment opened alternative non-Reges-taught sections, erased his statement from his syllabus, and then started assembling a committee to consider disciplining him. Good old FIRE went into action:

Mr. Reges, who isn’t tenured, is represented by lawyers from the Foundation for Individual Rights and Expression [FIRE], a group devoted to free-speech issues on campuses and beyond. FIRE calls Washington’s policy unconstitutionally broad and vague.

The suit, filed in federal court in Seattle, seeks to have the University of Washington end any alleged retaliation against Mr. Reges, including potential discipline by the committee, and to eliminate its policy governing speech and conduct.

University spokeswoman Michelle Ma said Wednesday that the school is reviewing the complaint, and “continues to assert that it hasn’t violated Stuart Reges’ First Amendment rights.”

FIRE’s position is the same as mine on this. (I add that I wouldn’t do what Reges did, as that kind of tomfoolery doesn’t belong in the classroom.) Once the University invites faculty to put a land acknowledgment on their syllabi, they cannot then mandate the words of that acknowledgment. Nor can they mandate how an acknowledgment is construed. Indeed, you can’t really say that Reges is wrong or is lying, for according to Locke’s theory, UW does own the land. (In contrast, if you tell lies on a syllabus or in a class, you can be disciplined). Thus I consider Reges’s statement, unwise as it was, to be permitted speech under the First Amendment.

Indeed, other faculty that deviated from the specified land acknowledgment were not disciplined, and you can guess why—because they acknowledged theft of the land. Only the one statement asserting that under a certain theory the land wasn’t stolen was the statement whose author was disciplined. I see that as a clear violation of the First Amendment, and as compelled speech: forcing faculty who make land acknowledgments to agree with a certain position about the land.

The to and fro:

The suit, filed in federal court in Seattle, seeks to have the University of Washington end any alleged retaliation against Mr. Reges, including potential discipline by the committee, and to eliminate its policy governing speech and conduct.

University spokeswoman Michelle Ma said Wednesday that the school is reviewing the complaint, and “continues to assert that it hasn’t violated Stuart Reges’ First Amendment rights.”

. . . . Victor Balta, a spokesman for the University of Washington, said in March that faculty aren’t required to post a land acknowledgment. He added, “Commonly utilized land acknowledgments are not politicized statements about land claims or ownership nor expressions of personal viewpoints about land ownership, but are rather statements of fact.”

No, they are not statements of fact; it depends on many things like concepts of “ownership” and on historical events. Reges has a debatable concept of “ownership”, but it is debatable. Balta is trying to claim that a (useless) expression of woke ideology is the same thing as “fact.” And why are such statements on syllabi in the first place? What do they have to do with computer science, or any academic discipline? UW says these statements are part of “a list of best practices for diversity.”

If UW can invite professors to put up ideological claims on their syllabi, and then dictate how those claims are to be made, then the school is on a slippery slope towards polluting the search for truth—and the process of teaching and learning—with politics and ideology.  You can imagine the kind of claims that universities could “invite” professors to put on their syllabi—so long as they accept the correct ideology. Here’s my suggestion, appearing on signs that appear in front of some American houses. All you have to do is replace “house” with “classroom”: 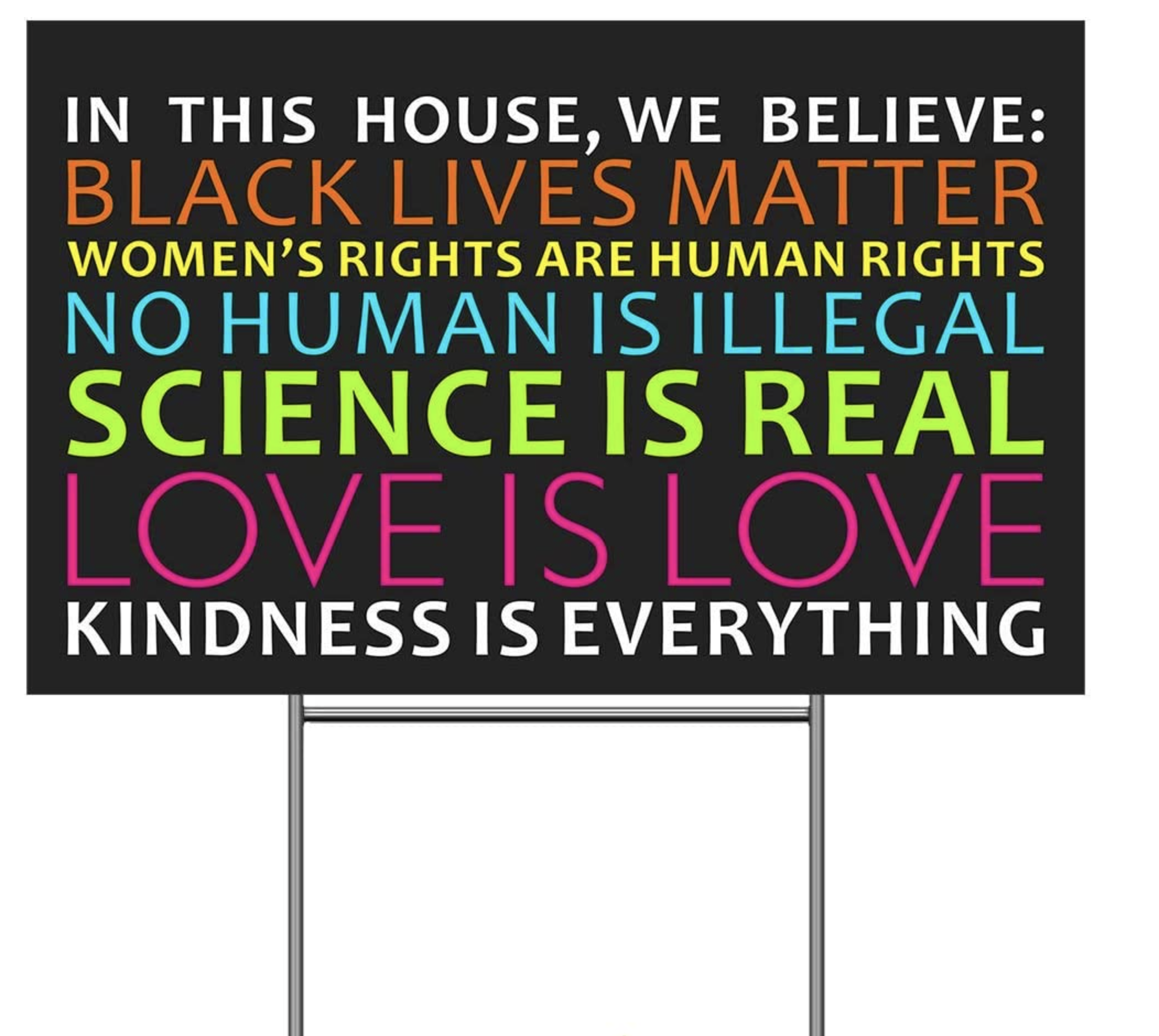 As for Reges, as of yesterday it appears his disciplinary committee is still being assembled. But in some ways he’s already been disciplined, which is why FIRE has filed a lawsuit.

27 thoughts on “University of Washington professor disciplined for posting a non-compliant “land acknowledgment” on his syllabus, sues the university.”