Physicist Brian Greene published the book below in 2020, and it appears to cover, well, just about everything from the Big Bang to consciousness, even spiritually and death. Click image to go to the Amazon site: 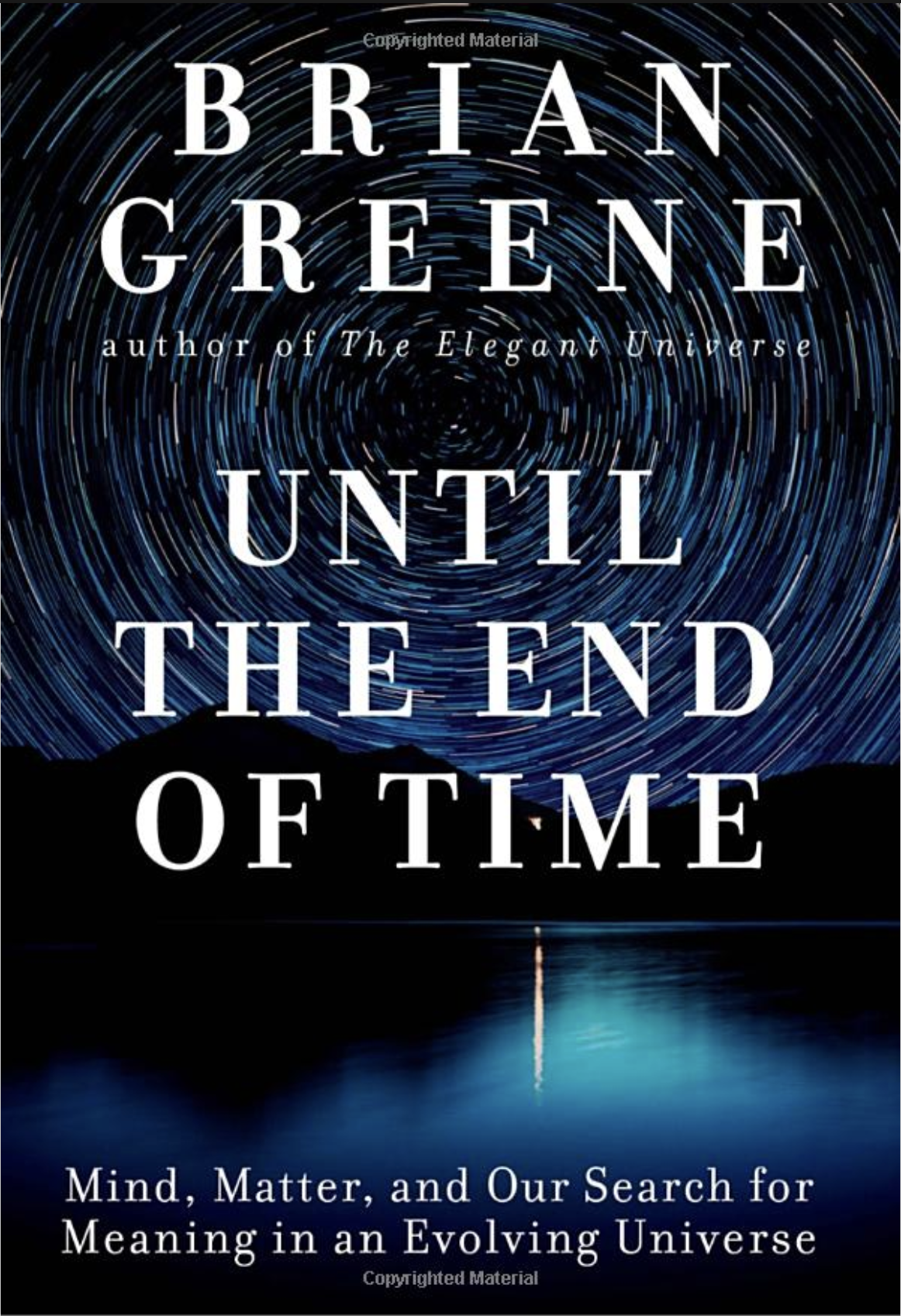 Some of the book’s topics are covered in the interview below, and its breadth reminds me of Sean Carroll’s book The Big Picture: On the Origins of Life, Meaning, and the Universe Itself. I’ve read Sean’s book, which was good (though I did disagree with his free-will compatibilism), but I haven’t yet read Greene’s. If you have, weigh in below.

I’ll try to be brief, concentrating on Greene’s view of free will, which is that we don’t have it, we’re subject only to the laws of physics, and our idea of free will is an illusion stemming from our sense that we have a choice. The interview with Greene is in, oddly, the July 1 issue of Financial Review, and is paywalled, but our library got me a copy. (Judicious inquiry may yield you one, too.) You might be able to access it one time by clicking below, but otherwise ask or rely on my excerpts:

Greene also dwells on the fact that we’re the only creatures that know that we’re going to die, an idea that, he says, is “profoundly distressing” and in fact conditions a lot of human behavior. More on that below. Here are a few topics from the interview:

Free will:  Although Greene, as I recall, has floated a form of compatibilism before (i.e., our behaviors are subject to natural laws and that’s all; we can’t have done otherwise by volition at any given moment, but we still have free will), this time he appears to be a rock-hard determinist, which I like because I’m one, too. Excerpt from the interview are indented:

What’s more, beyond thoughts of death, my colleagues, according to Greene, are mistaken in their belief they are making their own choices to change their lives. Thoughts and actions, he argues, are interactions between elementary particles, which are bound by the immutable laws of mathematics. In other words, your particles are doing their thing; we are merely followers.

“I am a firm believer,” he says, “that we are nothing but physical objects with a high degree of order [remember these words, “high degree of order” – we’ll circle back to that], allowing us to have behaviours that are quite wondrous, allowing us to think and feel and engage with the world. But our underlying ingredients – the particles themselves – are completely, and always, governed by the law of physics.”

“Free will is the sensation of making a choice. The sensation is real, but the choice seems illusory. Laws of physics determine the future.”

So then, free will does not stand up against our understanding of how the universe works.

“I don’t even know what it would mean to have free will,” he adds, “We would have to somehow intercede in the laws of physics to affect the motion of our particles. And I don’t know by what force we would possibly be able to do that.”

Do you and I have no more options than say, a fish, in how we respond to the world around us?

“Yes and no,” says Greene. “All living systems, us included, are governed by the laws of physics, but the ways in which our collection of particles can respond to stimuli is much richer. The spectrum of behaviours that our organised structure allows us to engage in is broader than the spectrumof behaviours than a fish or a fly might engage in.”

He’s right, and there’s no attempt, at least in this interview, to be compatibilistic and say, well, we have a form of free will worth wanting.

Death: From the interview:

“People typically want to brush it off, and say, ‘I don’t dwell on dying, I don’t think about it,”‘ says Greene via Zoom from his home in New York, where he is a professor at Columbia University. “And the fact that we can brush it off speaks to the power of the culture we have created to allow us to triumph over the inevitable. We need to have some means by which we don’t crumble under the weight of knowing that we are mortal.”

. . . Greene believes it is this innate fear of death twinned with our mathematically marching particles that is driving my colleagues to new horizons, and driving my decision to write this story, and your choice to read it, all bolstered by Charles Darwin’s theory of evolution.

Greene’s view appears to be that a substantial portion of human behavior is driven by a combination of two things: the “naturalism” that deprives us of free will, combined with our learned (or inborn) knowledge and fear of death. The death part is apparently what, still without our volition, forces us into action. I’m not sure why that’s true, as the explanation’s not in the interview but perhaps it’s in the book. After all, some people argue that if you’re a determinist doomed to eternal extinction, why not just stay in bed all day? Why do anything?  If we do things that don’t enhance our reproduction, it’s because we have big brains and need to exercise and challenge them. Yes, we know we’re mortal, but I’m not sure why this makes me write this website, write books, read, or do science. I do these things because they bring me pleasure. What does mortality have to do with it?

Natural selection:  According to the writer and interviewer Jeff Allen (an art director), Greene thinks that the promulgation of our mortality, as well as much of our communication, comes from storytelling, which has been instilled into our species by natural selection. Things get a bit gnarly here as the interview becomes a bit hard to follow. I’m sure Greene understands natural selection better than Allen, but Greene’s views are filtered through the art director:

Natural selection is well known for driving physical adaptation, yet it also drives behavioural change, including complex human behaviours such as language and even storytelling. Language is a beneficial attribute that helps us as a species succeed, as is the ability to tell stories, which prepare the inexperienced with scenarios that may benefit them in the future.

“Evolution works by tiny differentials in adaptive fitness, over the course of long timescales. That’s all it takes for these behaviours to become entrenched,” says Greene. “Storytelling is like a flight simulator, that safely allows us to prepare ourselves for various challenges we will face in the real world. If we fail in the simulator, we won’t die.”

Darwin’s theory of evolution is one of the recurring themes of Greene’s book.

Note in the first paragraph that evolved language and storytelling “helps us as a species succeed”. That’s undoubtedly true—though I’m yet to be convinced that storytelling is anything more than an epiphenomenon of evolved language—but whatever evolved here was undoubtedly via individual (genic) selection and not species selection. Traits don’t evolve to enable a species to succeed; they evolve (via selection) because they give their bearers a reproductive advantage. I’m sure Greene knows this, but Allen balls things up by throwing in “species success”.

Consciousness: If you’re tackling the Big Issues that deal with both philosophy and science, it’s consciousness, defined by Greene (and I) as both self-awareness and the presence of qualia, or subjective sensations (Greene calls it “inner experience”).  I’ve written about this a lot, and don’t propose to do more here. We have consciousness, we don’t know how it works, but it’s certainly a physical property of our brains and bodies that can be manipulated by physical interventions. The two issues bearing on Greene’s piece are where it came from and how will we figure out how it works. (Greene implicitly rejects panpsychism by asking “”How can particles that in themselves do not have any awareness, yield this seemingly new quality?”. That will anger Philip Goff and his coterie of panpsychists.)

I’m not sure about the answer to either., We may never know whether consciousness is an epiphenomenon of having a big brain or is partly the result of natural selection promoting the evolution of consciousness. I suspect it’s partly the latter, since many of our “qualia” are adaptive.  Feeling pain is an aversive response that protects us from bodily damage; people who lack the ability to feel pain usually accumulate substantial injuries. And many things that give us pleasure, like orgasms, do so because they enhance our reproduction. But this is just speculation.

“My gut feeling,” says Greene, “Is that the final answer will be the Darwinian story. Where collections of particles come together in a certain kind of organised high order ‘brain’, that brain is able to have particle motions that yield self-awareness. But it’s still a puzzle at this moment.”

Where Green and I differ is in what kind of work might yield the answer to how consciousness comes about. Greene thinks it will come from work on AI, while I think it will come, if it ever does, from neurological manipulations. Greene:

“That’s perhaps the deepest puzzle we face,” says Greene. “How can particles that in themselves do not have any awareness, yield this seemingly new quality? Where does inner experience come from?”

Greene’s suspicion is that this problem will go away once we start to build artificial systems, that can convincingly claim to have inner awareness. “We will come to a place where we realise that when you have this kind of organisation, awareness simply arises.”

In June this year, Google engineer Blake Lemoine said an AI he was working on, named LaMDA (Language Models for Dialogue Applications), got very chatty and even argued back.

I suppose this is a version of the Turing test, but it will be very, very hard to determine if an AI bot has “inner awareness”.  Hell, I don’t even know if my friends are conscious, since it depends on self-report! Can you believe any machine that says it has “inner experiences”?

With that speculation I’ll move on. Greene also muses on the origin and fate of the universe, and whether it might “restart” after it collapses, but cosmology is above my pay grade, and I’ll leave you to read about that yourself.

66 thoughts on “Brian Greene: We don’t have free will: one idea in a wide-ranging book”