Today we have a variety of photos from reader Mark Richardson, who lives in Washington State. Mark’s IDs and captions are indented, and you can enlarge the photos by clicking on them.

All these pics were taken in my backyard in Western Washington; a few are from last year, but most are recent. This year has seen record-breaking rainfall and cooler weather. The entire month of June was pretty much rain, rain, rain. I don’t know how the weather affected local flora and fauna, but just wanted to add that reality as a relevant factor up here.

The first three are of a female pileated woodpecker (Dryocopus pileatus). I’ve never been able to get a good shot of this bird, but I upgraded my camera and lens just last week, and I was finally able to get some high-res photos of this gorgeous bird. The photos are a series of the woodpecker eating suet, getting ready to take-off, and then on the wing. The last photo is a bit blurry—these birds are large, but extremely quick. 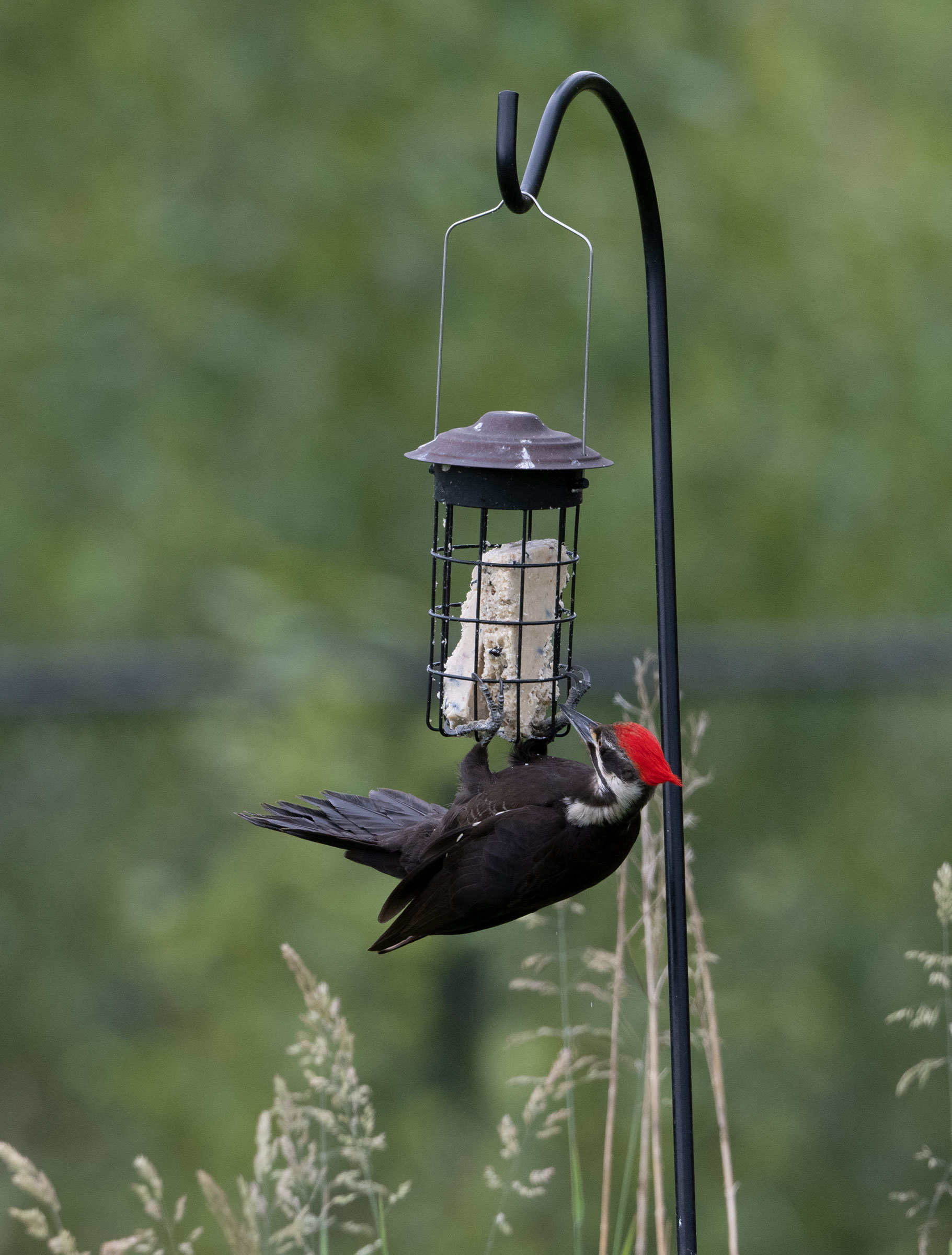 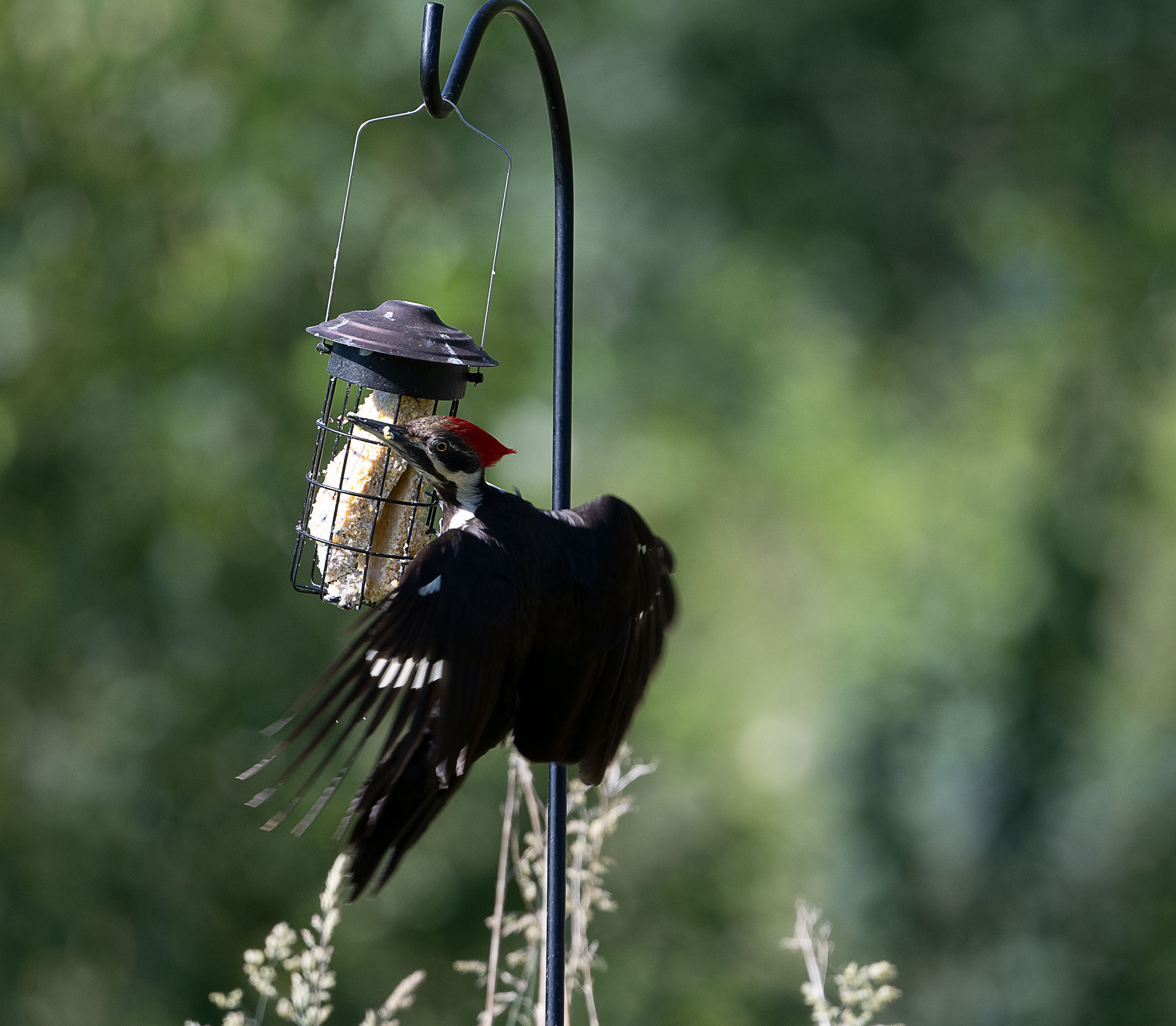 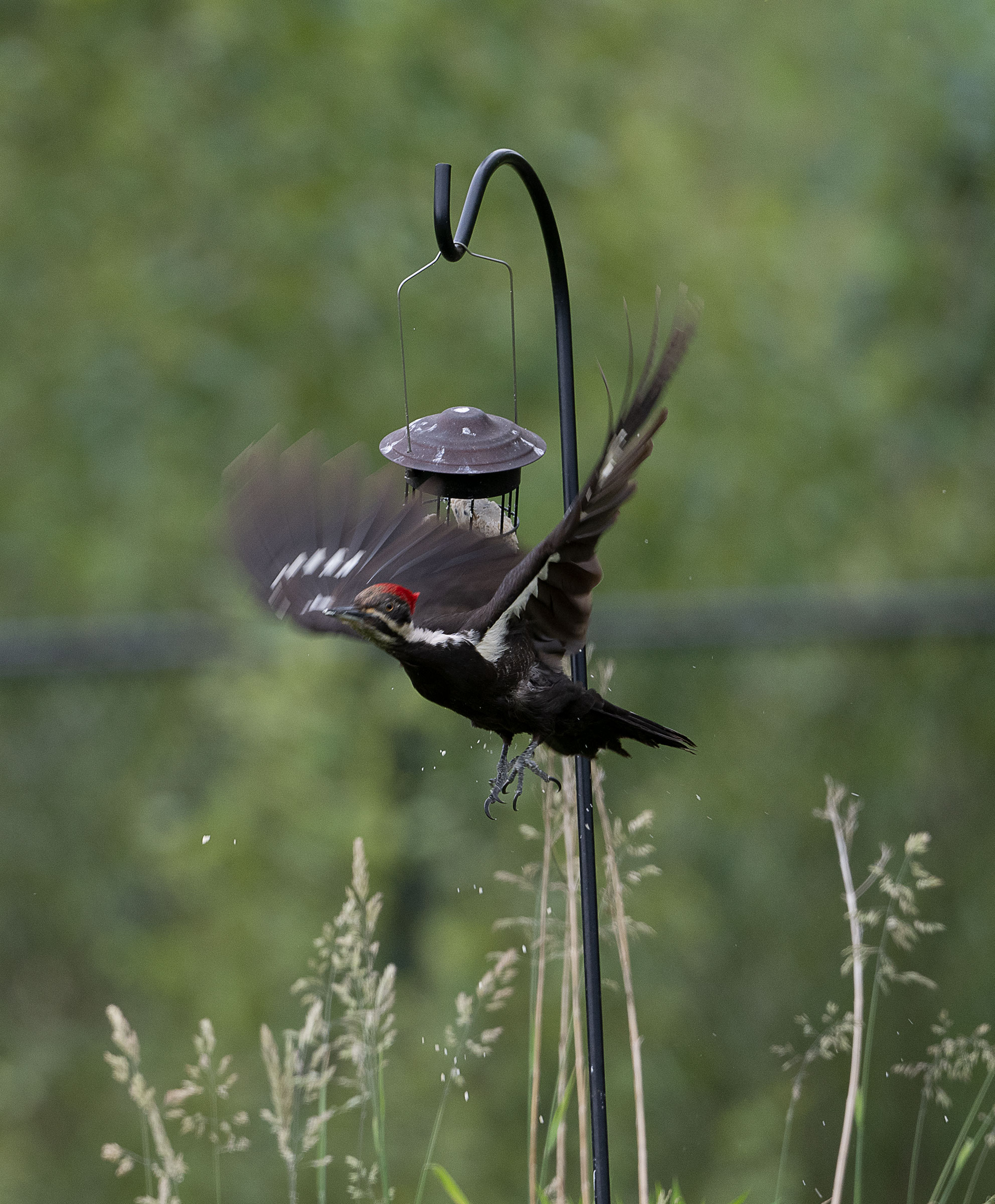 A male red-breasted nuthatch (Sitta canadensis) at the feeder with a sunflower seed. I thought this was sort of funny because the seed looks like it’s an extension of the nuthatch’s beak. 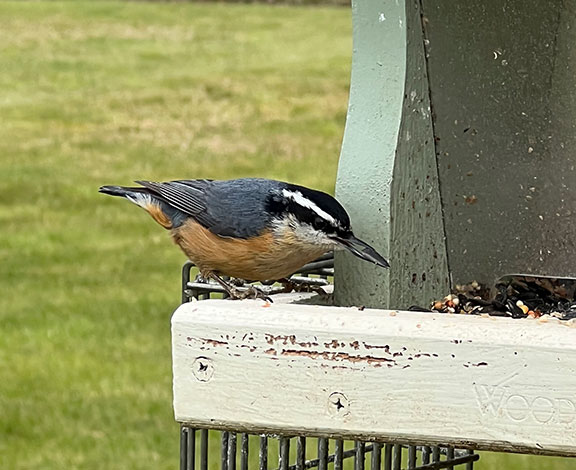 A mourning dove (Zenaida macroura) and a male northern flicker (Colaptes auratus) sharing a dogwood branch (mourning doves are not sexually dimorphic, so I don’t know its sex, but for anthropomorphic purposes, I’m saying it’s a female). This is a somewhat humorous photo because it looks like the dove is fluffing her tail feathers to get the flicker’s attention, and he winks at her (you can see his eye is shut). 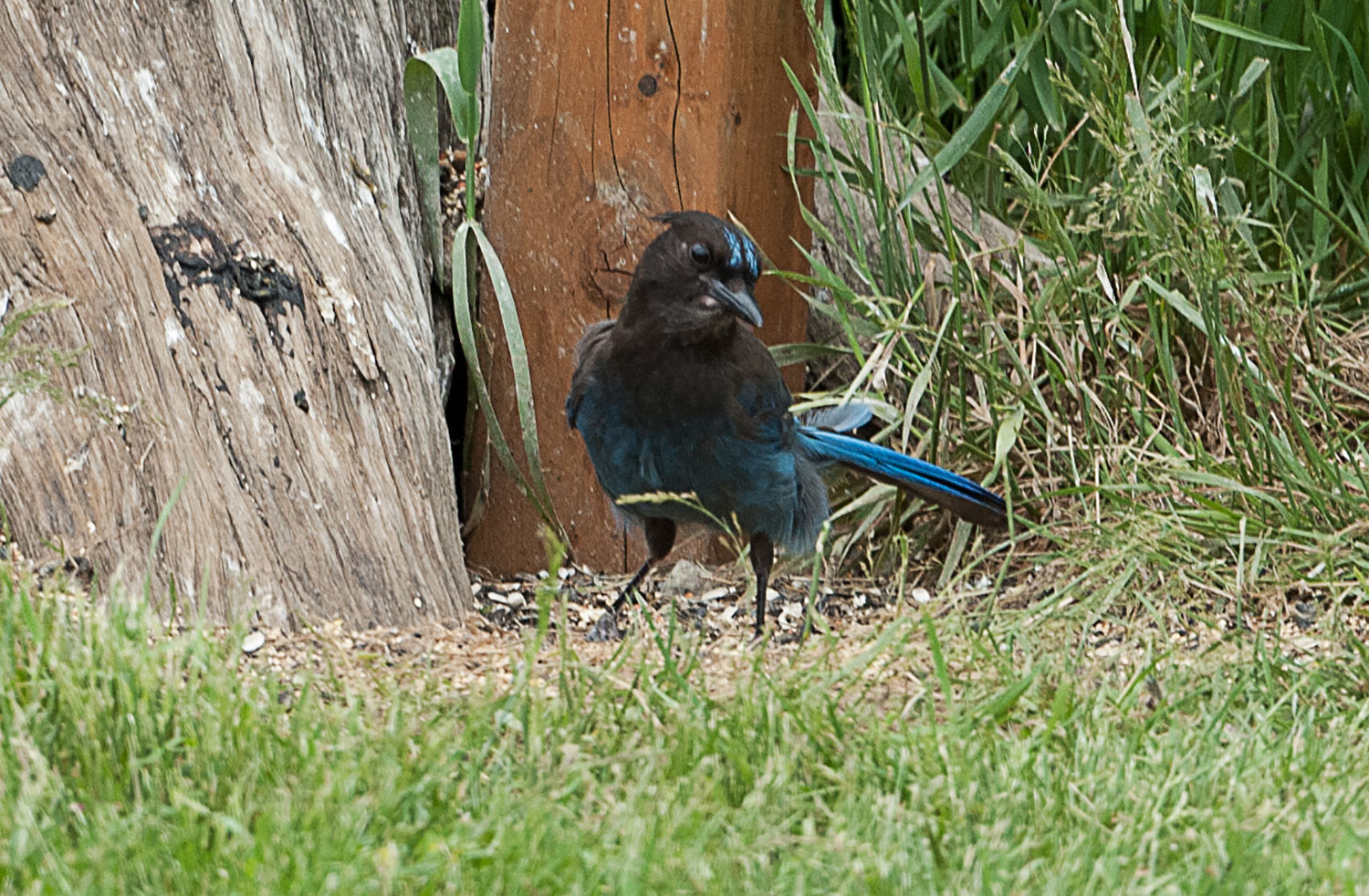 Male red-winged blackbird (Agelaius phoeniceus) in flight. This photo is blurry, but I thought it was sort of artsy, so included it. 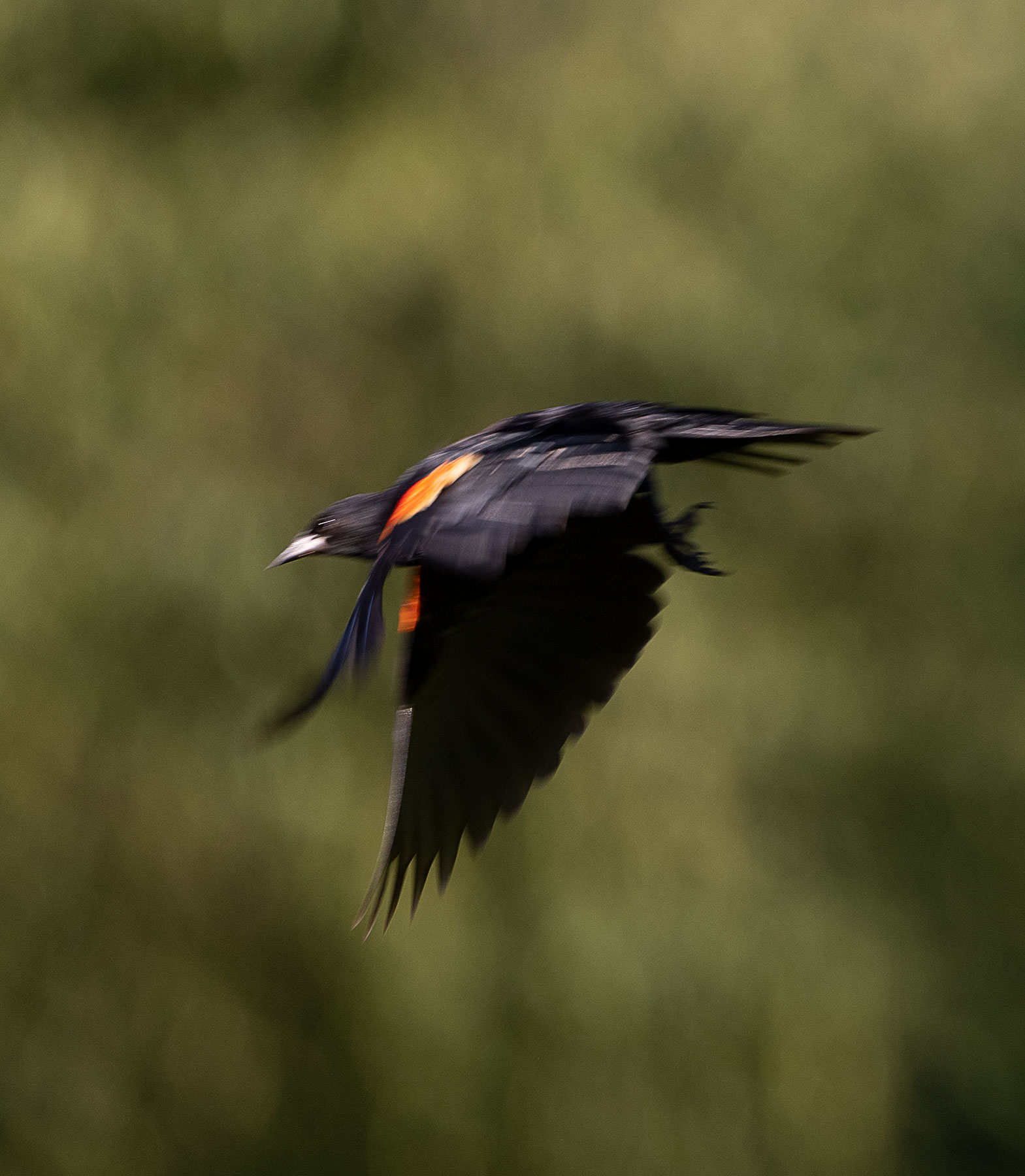 Male western tanager (Piranga ludoviciana). This year is the first time I’ve spotted this beautiful bird around these parts. There is a mated pair that have been visiting the feeders since spring. I hope I get a photo in flight, and better photos all-around. We’ll see. 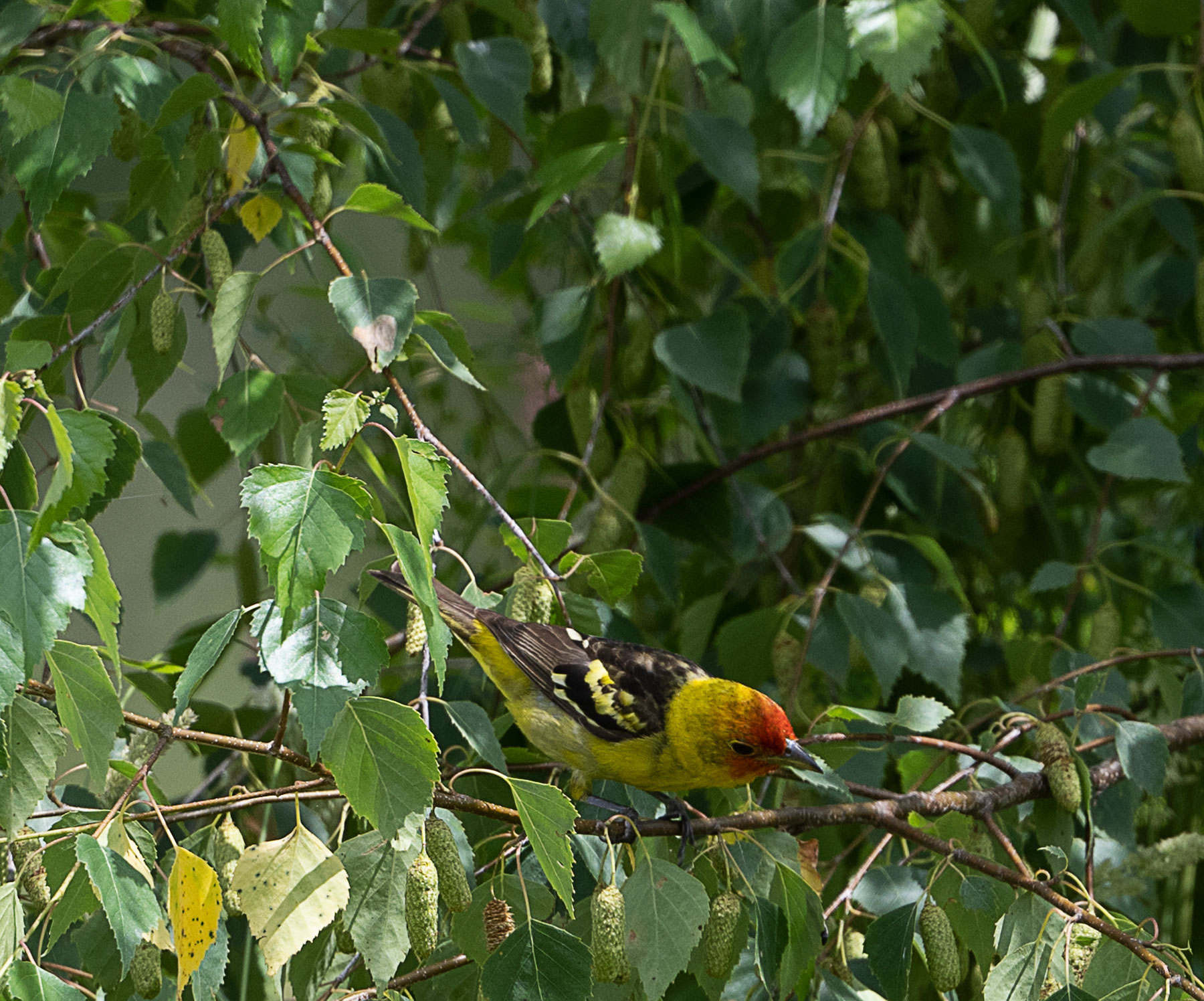 Female ruby-throated hummingbird (Archilochus colubris) feeding on the nectar of an unknown tree’s flower. This was far away, maybe 100 ft.; it’s a mundane photo, but it excited me regarding the high-tech properties and potential of my new camera. Hand-held, my old kit would never enable me to take a sharp photo in this situation. 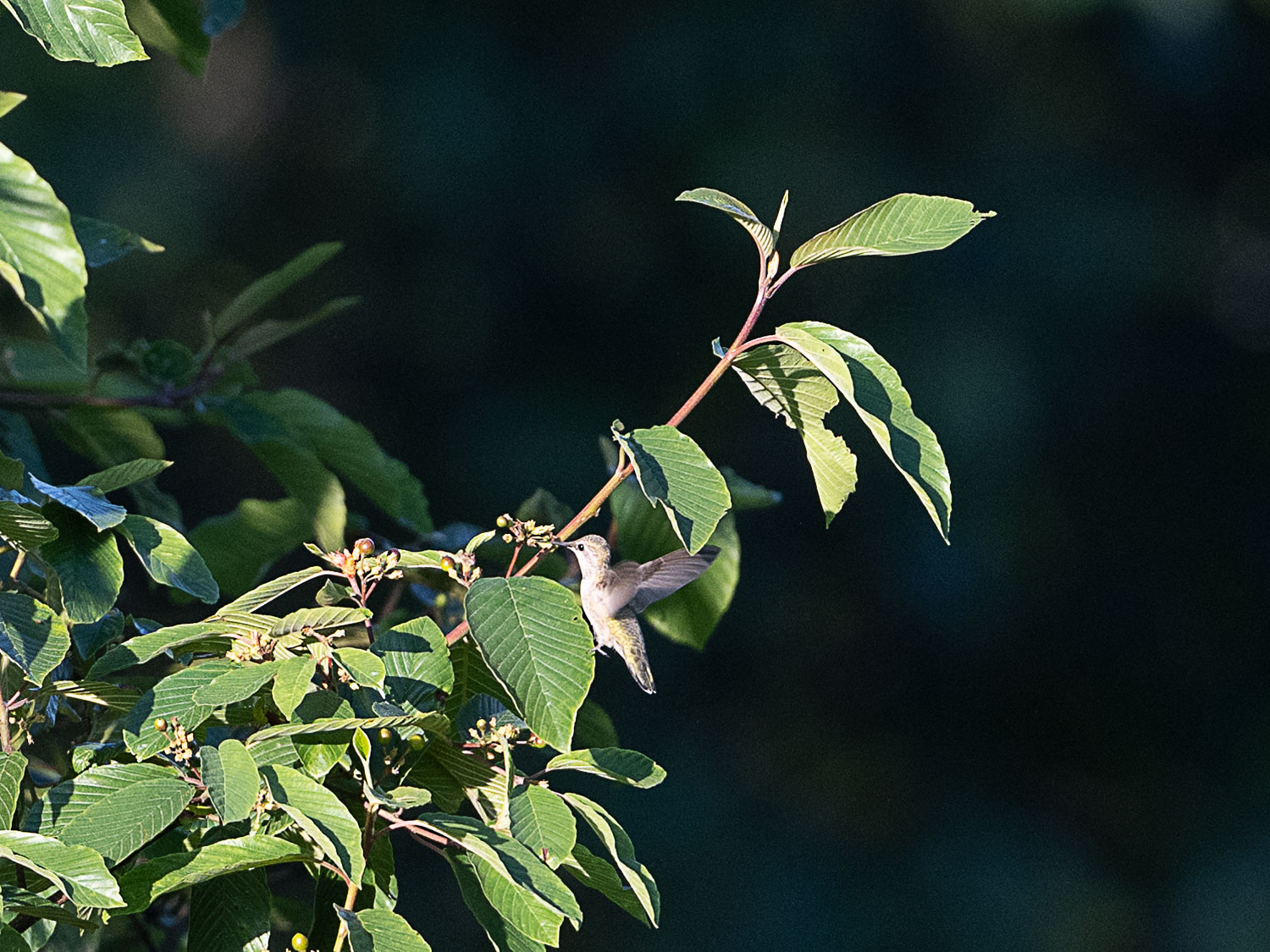 Putting out the bird feeder this year has attracted a couple of black bears. This junior black bear (Ursus americanus) has been a common sight at our bird feeder this Spring. I love the girl. We call her “Sheila” for whatever reason, but with dogs, it’s hectic when she decides to visit. I thought our dogs would scare her off, but she’s bold; they bark, she shrugs and continues nomming the seed. When she shows up (or one of her relatives) we put the bird feeder away for a week or so, and that seems to break the “habit”. She’s beautiful though…we’re assuming she’s a female because no photo has revealed male bits. I assume a black bear’s male genitalia would be visible in the standing photo…maybe I’m wrong? 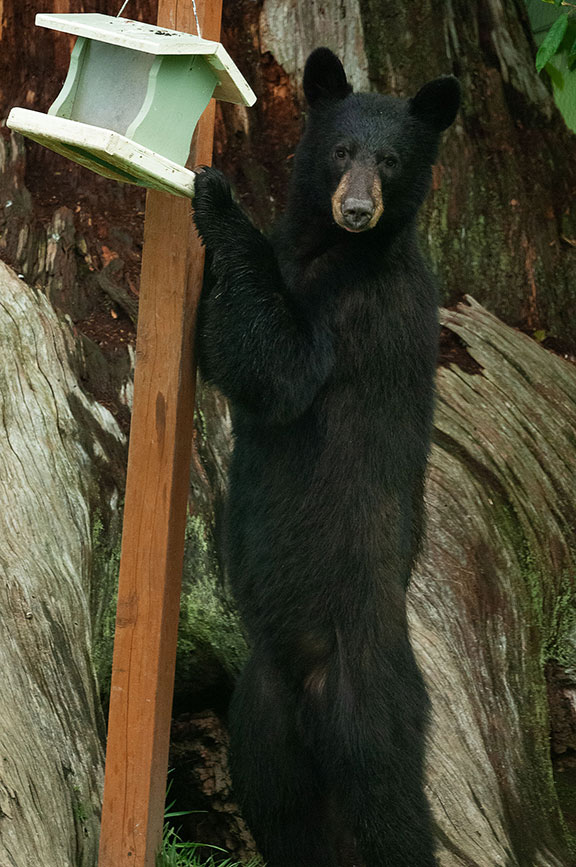 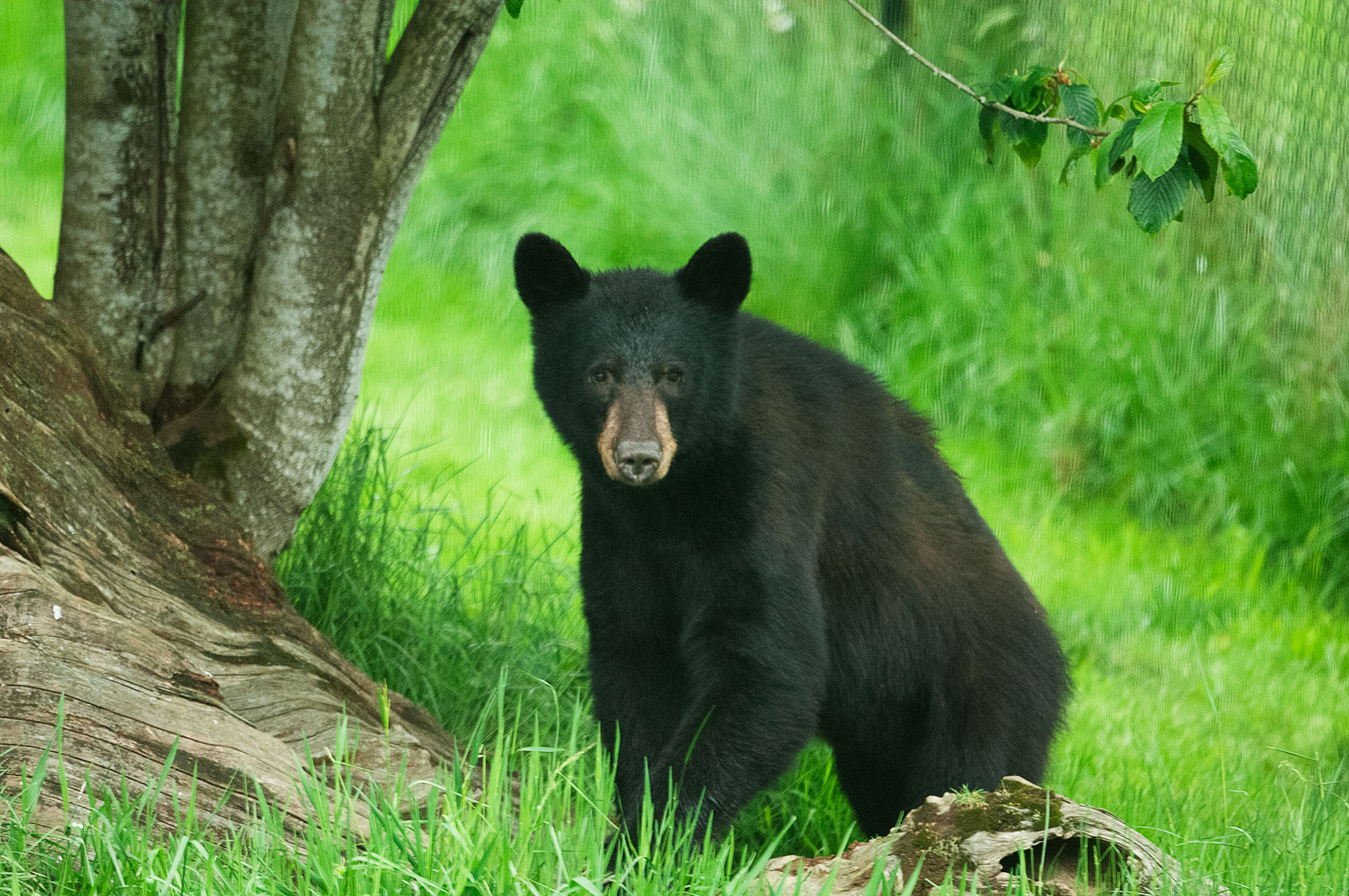 Lastly is a pair of black-tailed deer bucks in velvet (Odocoileus hemionus columbianus); they’ve been hanging out in the grassy-areas of our property. For whatever reason, these two are thick as thieves…as far as I’ve seen, they are never solitary. I’m going to apply the naturalistic fallacy and declare them gay! BTW, this “species” is now considered a subspecies of the mule deer. What to do with the binomial, then? Above my pay grade. . . either way, they are majestic animals.