It appears, from the tweet below, that London’s famed Natural History Museum has taken its place in the Woke Parade, for the tweet below clearly means to validate different human gender identities and parade the Museum’s pro-LGBTQ+ credentials by publicizing the several lizard species that don’t require male sperm to have offspring. This phenomenon is called parthenogenesis, meaning “a form of asexual reproduction in animals that does not require fertilization by sperm.” In effect, all members of a parthenogenetic species (if one can call them “species”) are female.

Not all species need two sexes.

All around the world, a number of different species of lizards have evolved to be all-female. In order to reproduce, the reptiles simply clone themselves. 🦎

What irks me is that this has NOTHING to do with LGBTQ+ people, who do not reproduce without fertilization. None of us do! This is simply virtue-signalling using animals to support human behaviors (I suppose it’s relevant to gender identity in this case, or if you are an extremist, the superfluity or toxicity of males). And vindicating human behavior by pointing to animals is a form of the “naturalistic fallacy“: the view that “whatever is natural must be good.” If you think I’m overinterpreting the intention of this series, have a look at the second video below or full Monty tour (a 26-minute video) produced by the Natural History Museum.

Of course humans don’t have parthenogenesis, so connecting it with LGBTQ+ in a video tour (see below) is simply mistaken. The naturalistic fallacy, too, is mistaken: that’s why they call it a “fallacy”.  There are plenty of natural animal behaviors that we would not want to see in our species, including infanticide, murder of conspecifics, cannibalism, eating one’s mate after copulation, robbery, adultery, theft, and the whole gamut of crimes and sins.

Yet Leftist biologists in particular are prone to this fallacy, constantly pointing to the diversity of sexual behavior in animals to somehow justify the diversity of sexual behavior in our own species. If I hear one more person bang on about how the clownfish—a sequential hermaphrodite that can change from male to female when a female in a group dies—I’ll scream. (Note that there is a definite change from one binary sex to another: a change from producing sperm to eggs.) Gender or sex change in humans need not be justified by pointing to its occurrence in nature: it’s something to accept and respect regardless of whether it occurs in nature. (And if it didn’t, would that make transsexuality bad because it’s “unnatural”?)

But I digress. Offspring produced without male fertilization are common among invertebrates, especially insects. Vertebrates can have it too: it’s been seen not just in lizards, but in snakes, sharks, fish, and birds. In some of these (like the Komodo dragon), parthenogenesis may occur alongside normal reproduction, and so two sexes are not just present, but “needed”, for without males, the parthenogenetic variant would eventually disappear. (Whether to call parthenogenetic lineages that are genetically different as “different species from each other” is, as I implie above, a matter of taste.)

Parthenogenesis in reptiles, is, as the video below shows, usually results from hybridization between two species. The hybrid offspring have two different genomes, one genome from each of the parental species, and this may mess up the normal process of meiosis that forms sperm and eggs. If it gets messed up in hybrids that, without fertilization, eggs can go on to develop into adults (and these eggs must still have two genomes), we have parthenogenesis.

Sometimes the asexual reproduction persists and we get a new “species”, but a feature of parthenogenesis like this is that it is very often an “evolutionary dead end.” For reasons probably connected with a lack of genetic variation, parthenogens don’t hang around for long as a group. They tend to go extinct well before other species. We know this because looking at the genes of the parthenogenic individuals show that they’re very similar to those of the parental species, which means that the new asexual form hasn’t been around long enough to genetically diverge from the two parental species. The “dead end” nature of this asexual process isn’t mentioned by the Natural History Museum!

Even in parthenogenesis, two sexes are sometimes “needed”, because in many forms of the trait, even in reptiles, sexual activity is needed, even without fertilization. This can take the form of a female mounting another female (“pseuocopulation”), or even copulation with males from one of the parental species—copulation that doesn’t cause fertilization. For some reason we don’t understand, the process of egg development may require a behavioral trigger of copulation or pseudocopulation. Thus the Natural History Museum is also misleading in saying that “two sexes aren’t needed.”  In some cases they are, though they’re needed in one of the two parental species.

Finally, the Natural History Museum errs by saying that all parthenogenic reptiles are clones (genetically identical to the mother). This isn’t true. There are a variety of ways that animals can produce offspring without sex. Some of these involve all the offspring being clones, producing eggs by simple development of an egg that happens to have the same genomic constitution of a mother, i.e. two copies of each chromosome. This form, called apomixis, produces offspring that are all genetically identical to themselves and to their mother. These are all clones.

But there’s another way of reproducing without sex that produces genetically diverse offspring. It’s called automixis, and can occur in several ways. One is that meiosis (production of gametes) produces genetically diverse egg cells, two of which can fuse to form a diploid egg that’s capable of becoming an adult. Since the eggs themselves are genetically different, the diploid eggs will differ from each other too, and  thus the offspring that result will not be clones of each other—or of the mother. Some lizards use this method of reproduction, and so the offspring are not “clones”.

That’s the biology lesson, so you can see that there are at least two errors in the Natural History Museum tweet that I’ve put below again.. However, the tweet’s purpose is not scientific accuracy, but to imply that reproduction without sex somehow supports LGBTQ+ people. As I said, it doesn’t, for no LGBTQ+ folks, or any other human, reproduces parthenogenetically. Readers may wonder what mindset made someone decided that parthenogenetic lizards are part of the “LGBTQ+ tour.” 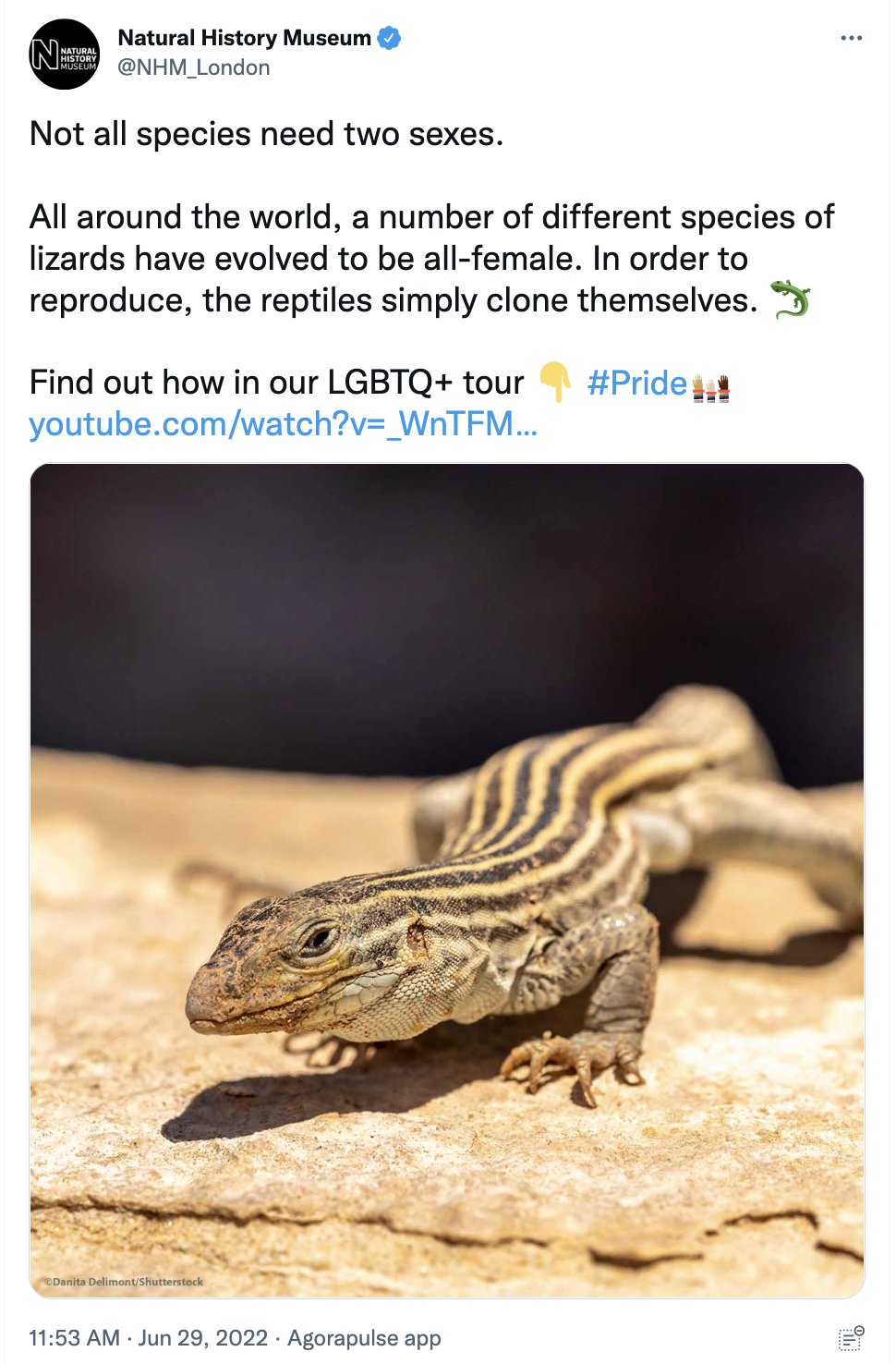 The video below, labeled above and on YouTube as another part of the LGBTQ+ natural history tour, is pretty anodyne, and in fact doesn’t even mention the L+ sequence. But look at the one below that,designed to vindicate human homosexuality by showing that some beetles have same-sex behavior!

Oy vey! The advantage of the video below is that it’s short. It describes same-sex sexual behavior in insects. Why? Because it’s meant to show that homosexual behavior in humans. because it occur in animals, is “natural”. Ergo, we can’t criticize it. But as I said in my review of Joan Roughgarden’s book Evolution’s Rainbow, a review published in the Times Literary Supplement, this argument doesn’t hold water:

But regardless of the truth of Darwin’s theory, should we consult nature to determine which of our behaviours are to be considered normal or moral? Homosexuality may indeed occur in species other than our own, but so do infanticide, robbery and extra-pair copulation.  If the gay cause is somehow boosted by parallels from nature, then so are the causes of child-killers, thieves and adulterers. And given the cultural milieu in which human sexuality and gender are expressed, how closely can we compare ourselves to other species? In what sense does a fish who changes sex resemble a transgendered person? The fish presumably experiences neither distressing feelings about inhabiting the wrong body, nor ostracism by other fish. In some baboons, the only males who show homosexual behaviour are those denied access to females by more dominant males. How can this possibly be equated to human homosexuality?

Ironically, while narratorJosh Davis, says that the early entomologists describing same-sex copulation in insects did so to justify homosexuality as “natural” in humans, Davis doesn’t go on to say that this whole endeavor is meaningless.  What if there were no same-sex behavior in insects or other animals? Would that mean that human homosexuality should be deemed abnormal and deplorable? Of course not!

This whole “LGBTQ+ four of the Natural History Museum appears to rest entirely on the naturalistic fallacy (see the  26-minute video, too). Whatever happens vis-à-vis sex in animals has nothing to do with how we regard homosexuality (or any other non-cis sexual behavior) in humans. We do lots of things that animals don’t, and judging our behavior, morally or otherwise, must rest entirely on human considerations like the morality we’ve developed that isn’t seen in animals. It’s ironic that in their desire to be au courant with woke ideology, biologists have reverted to adopting a fallacy that they rejected long ago.

The Natural History Museum has fallen into a real trap here, and it’s embarrassing that it are producing these videos. But of course science is now increasingly prey to “progressive” ideology, and so much worse for science.

Be sure to watch the long video that claims that “some sheep are homosexual”—in the human sense. That is, they choose to be homosexual—as if human gay people choose. It’s all a big mess.