I have a few submissions as a backlog, but would surely appreciate more. Send in your photos!

Today’s contribution is from regular Mark Sturtevant, who’s never let me down.  His captions and IDs are indented, and you can enlarge the photos by clicking on them. Mark also notes that if you want to see more of his work, go to his Flickr page.

Here are some caterpillar pictures taken 2 years ago (I am terribly behind). All were found in various parks in eastern Michigan, which is where I live.

First up is a catalpa sphinx moth caterpillar (Ceratomia catalpae). I used to see lots of these when I was growing up, but I think I am too far north for them here. 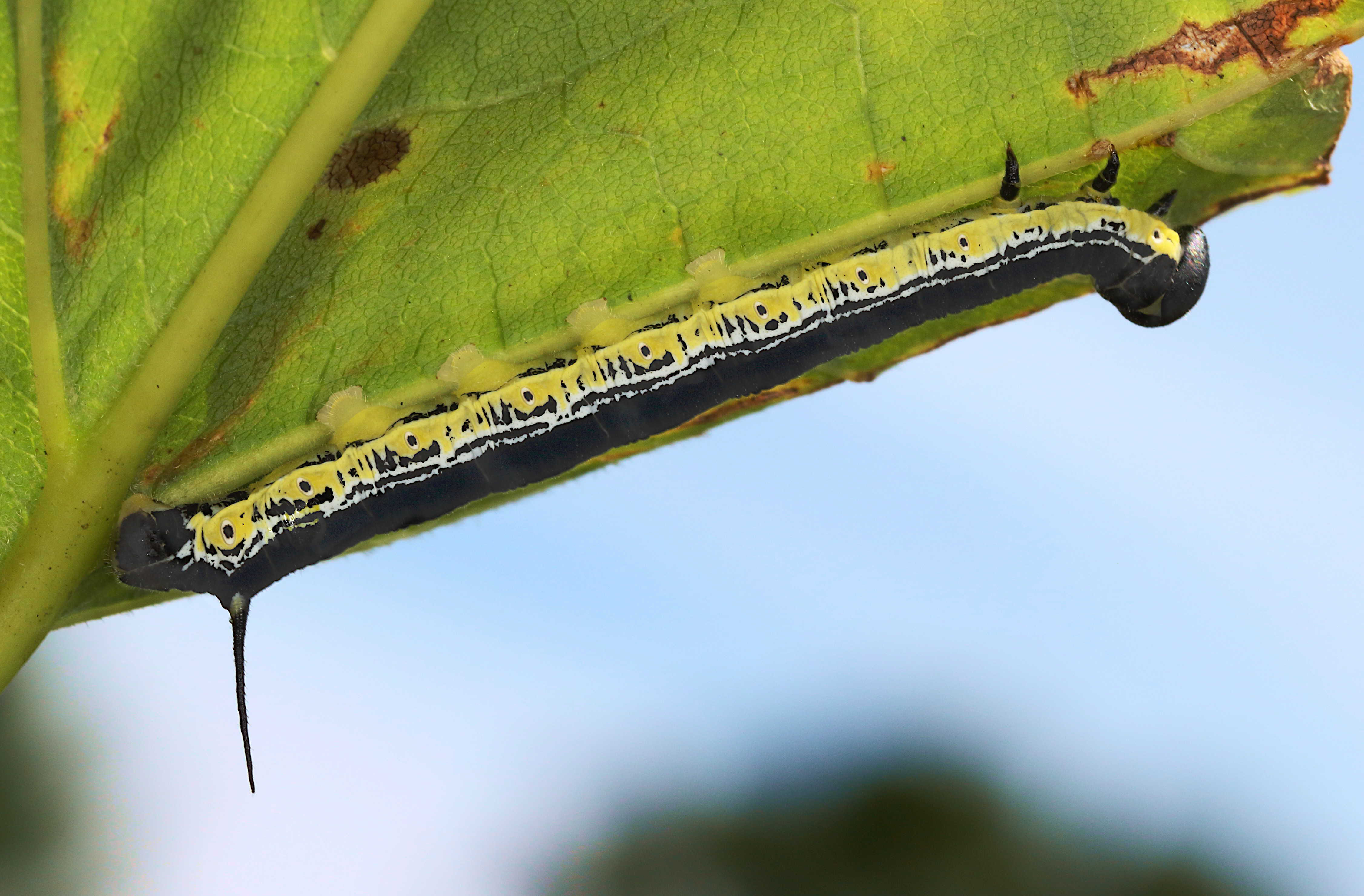 Next are pictures of promethea moth caterpillars (Callosamia promethea) at different stages. They grow into a large-ish Saturniid moth that looks like a miniature cecropia moth. I can routinely find promethea cats at certain parks, especially if I inspect tulip trees. The smallest is next to a ray spider egg sac, which is a common cobweb building spider. The largest caterpillar is the size of your thumb. 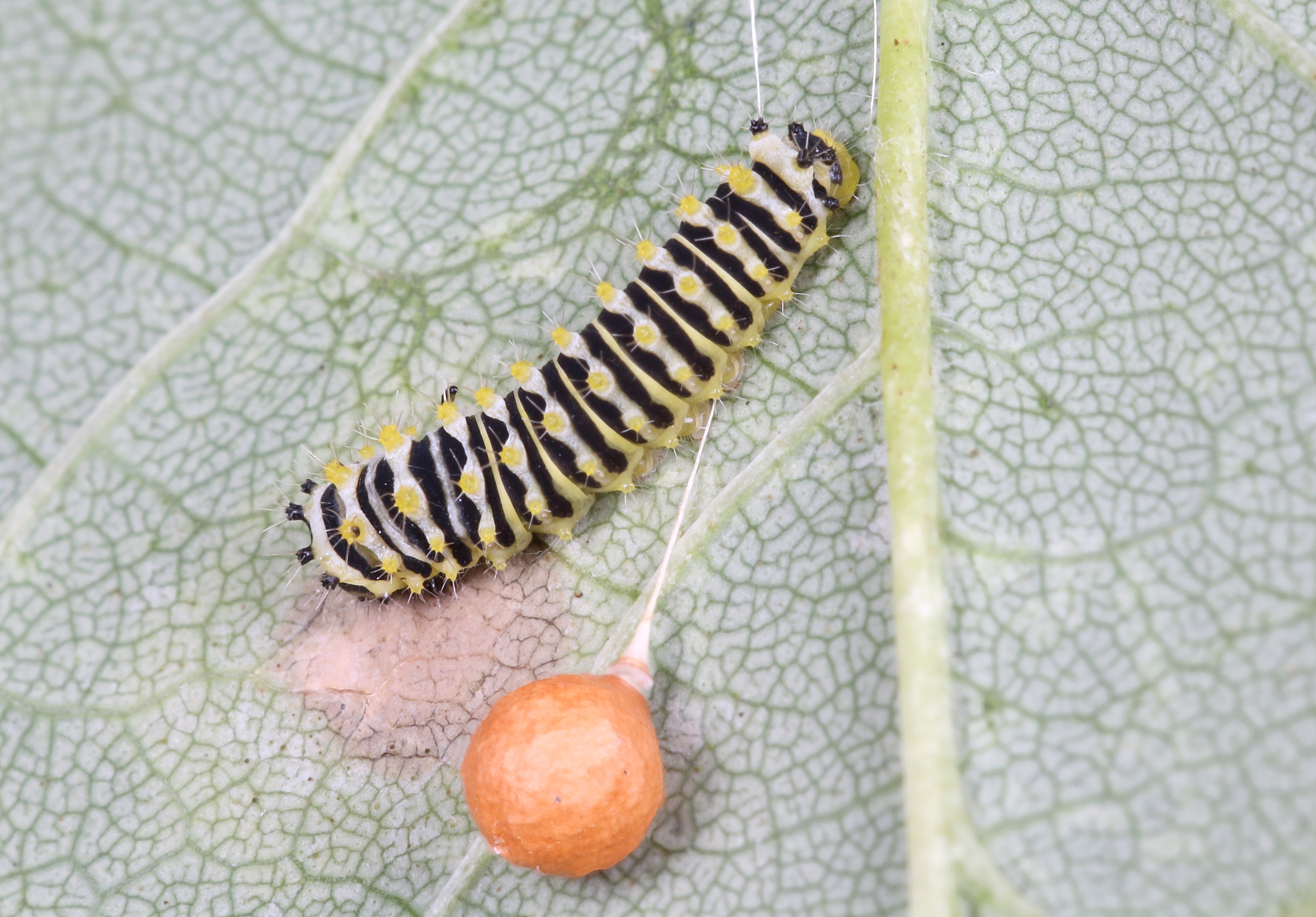 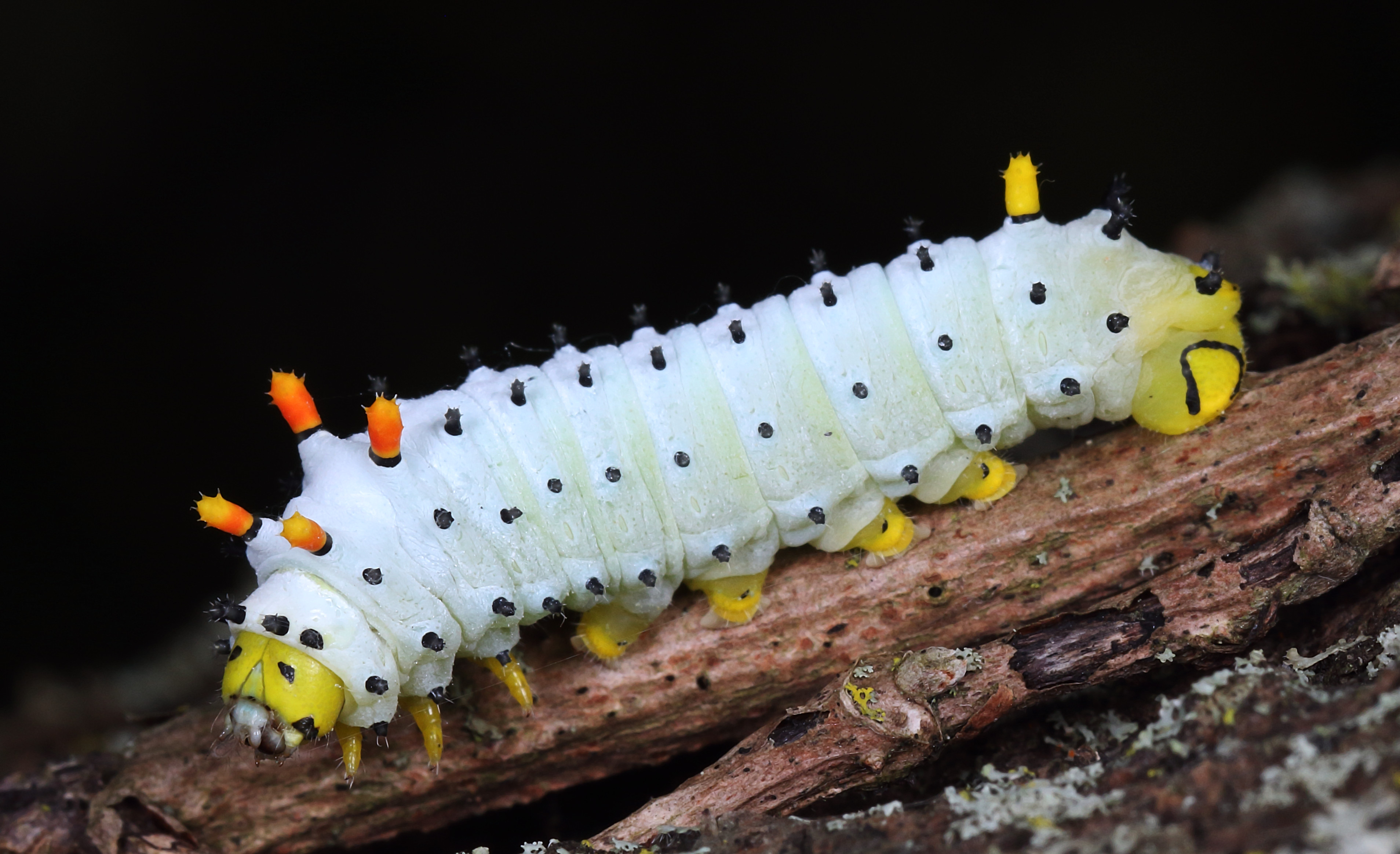 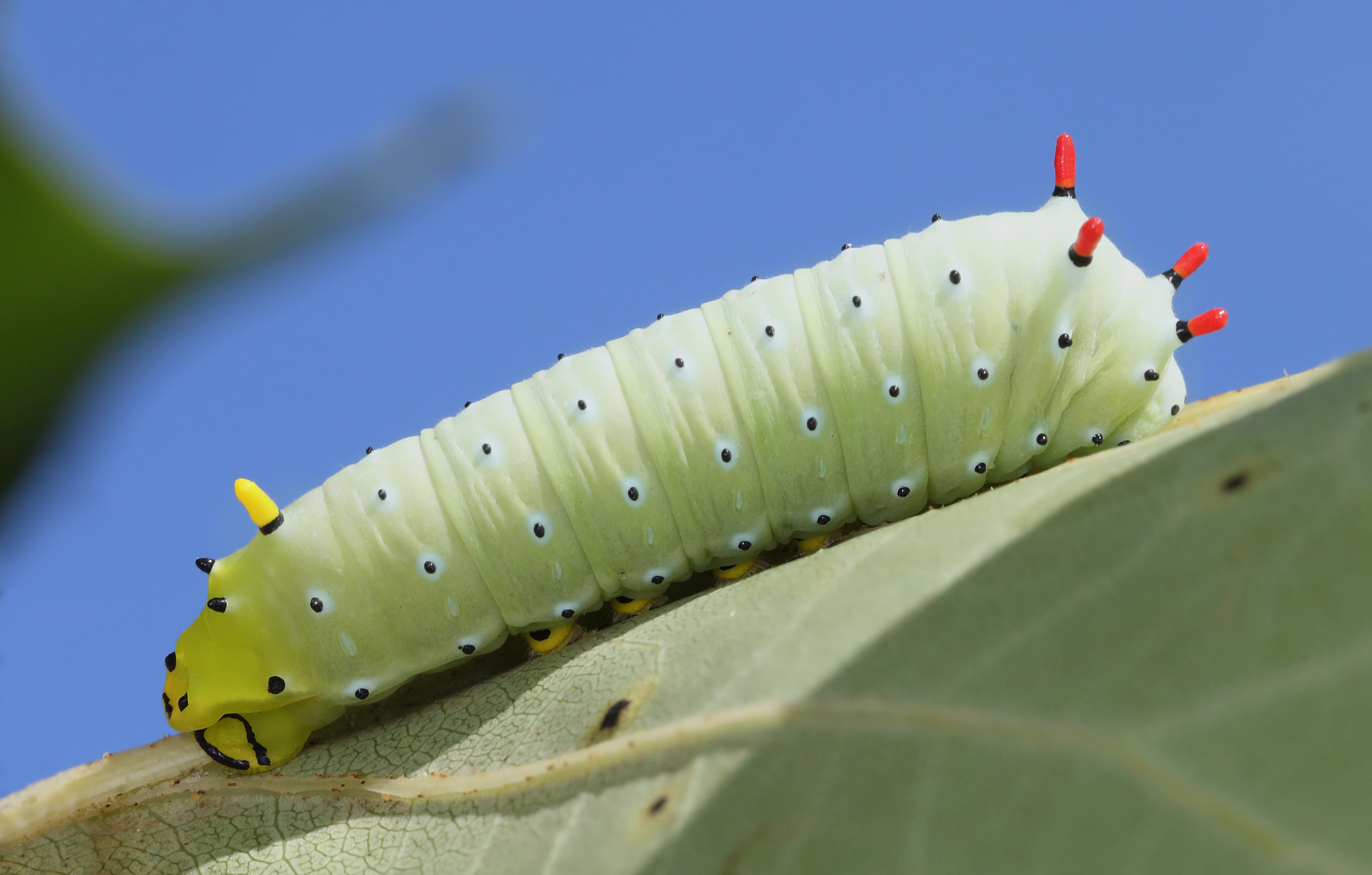 Eastern Panthea caterpillar, Panthea furcilla. I was completely stumped by the ID on this one, even though a caterpillar feeding on pine should be a major clue. But the kind folks at BugGuide helped me out in a jiffy. 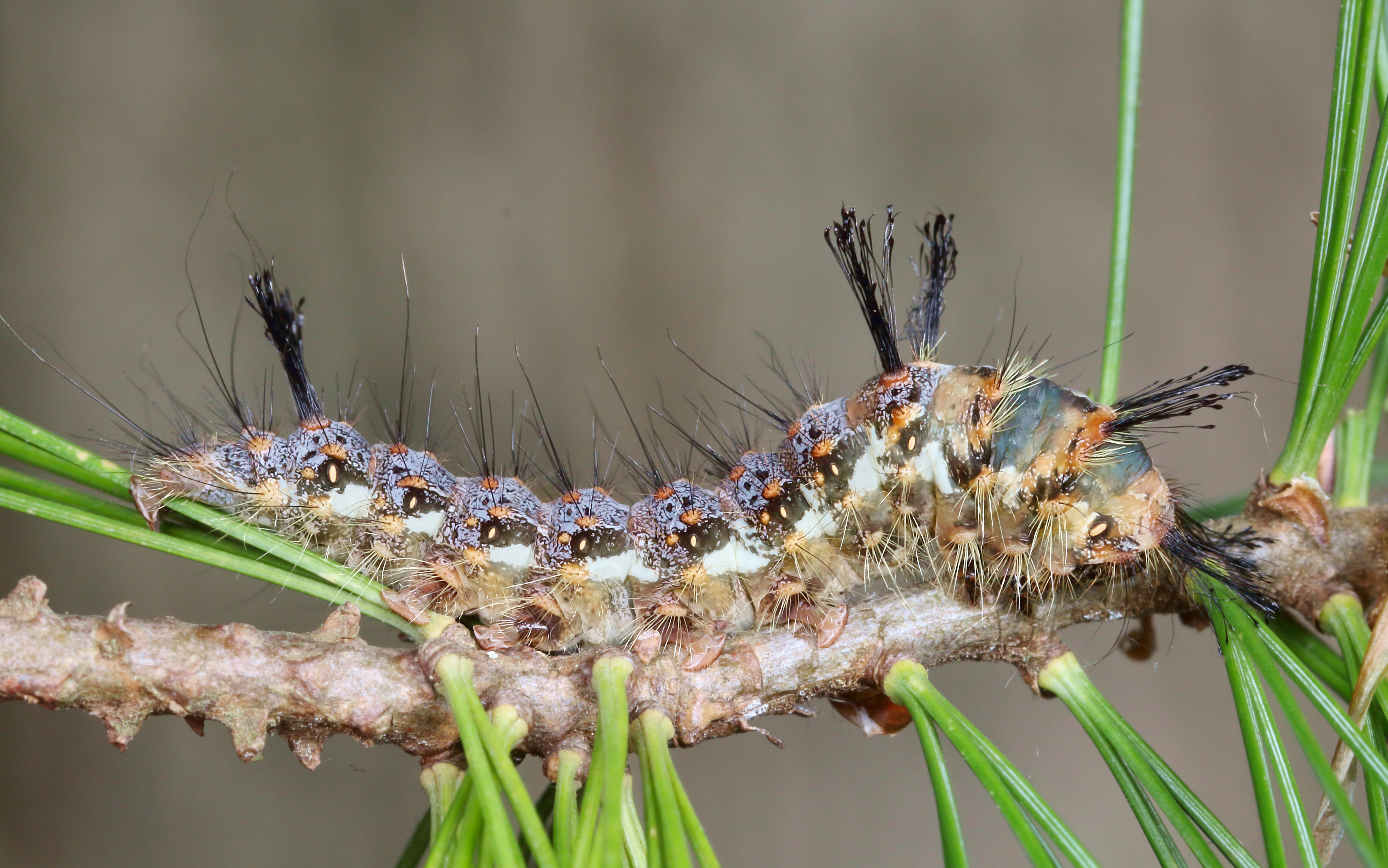 Slug caterpillars have extremely reduced or even vestigial legs. These two could barely move. First is the larva of the yellow-shouldered slug moth, Lithacodes fasciola. Next is the amazingly camouflaged skiff slug caterpillar (Prolimacodes badia). I have never seen this species before. 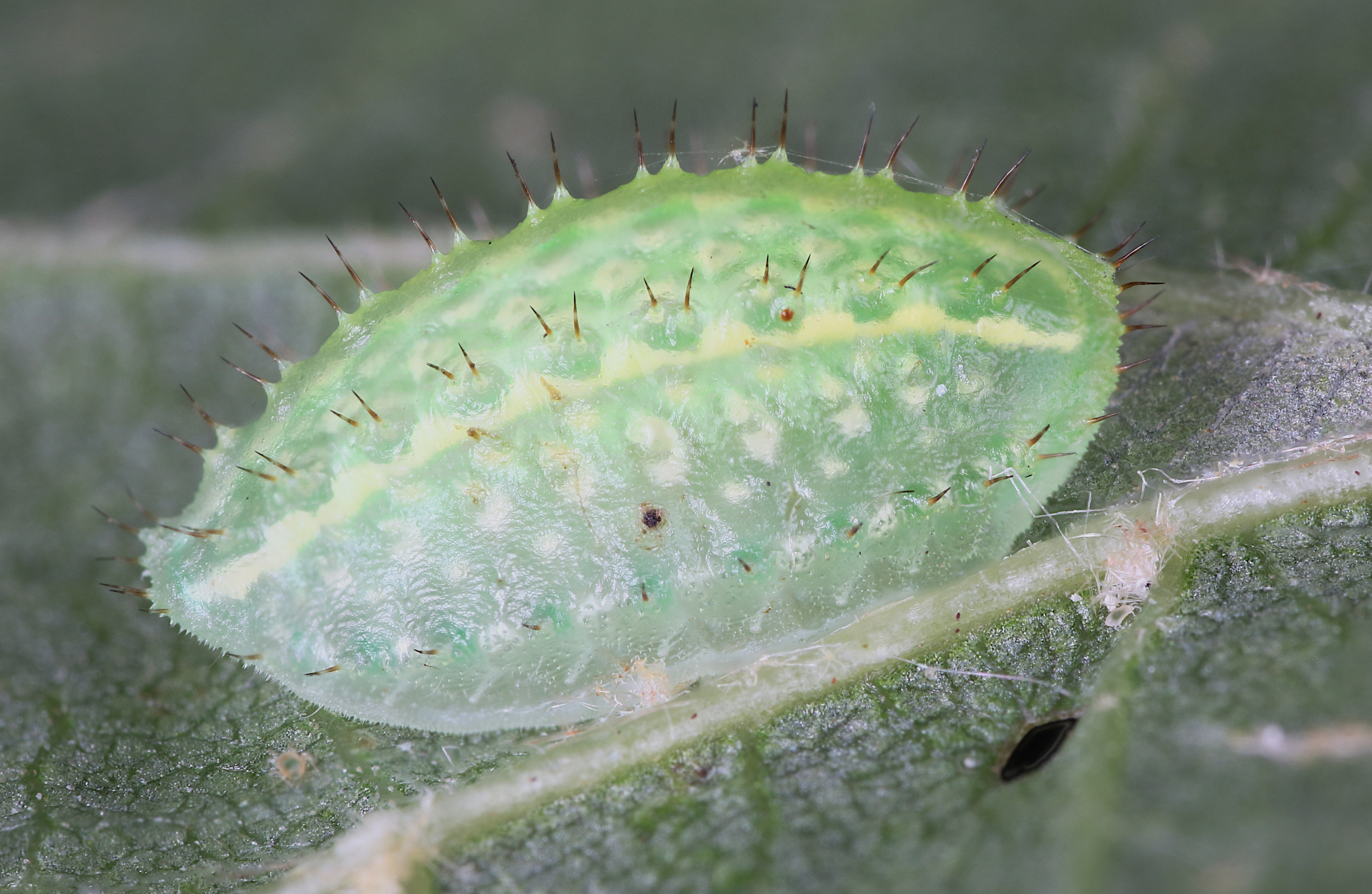 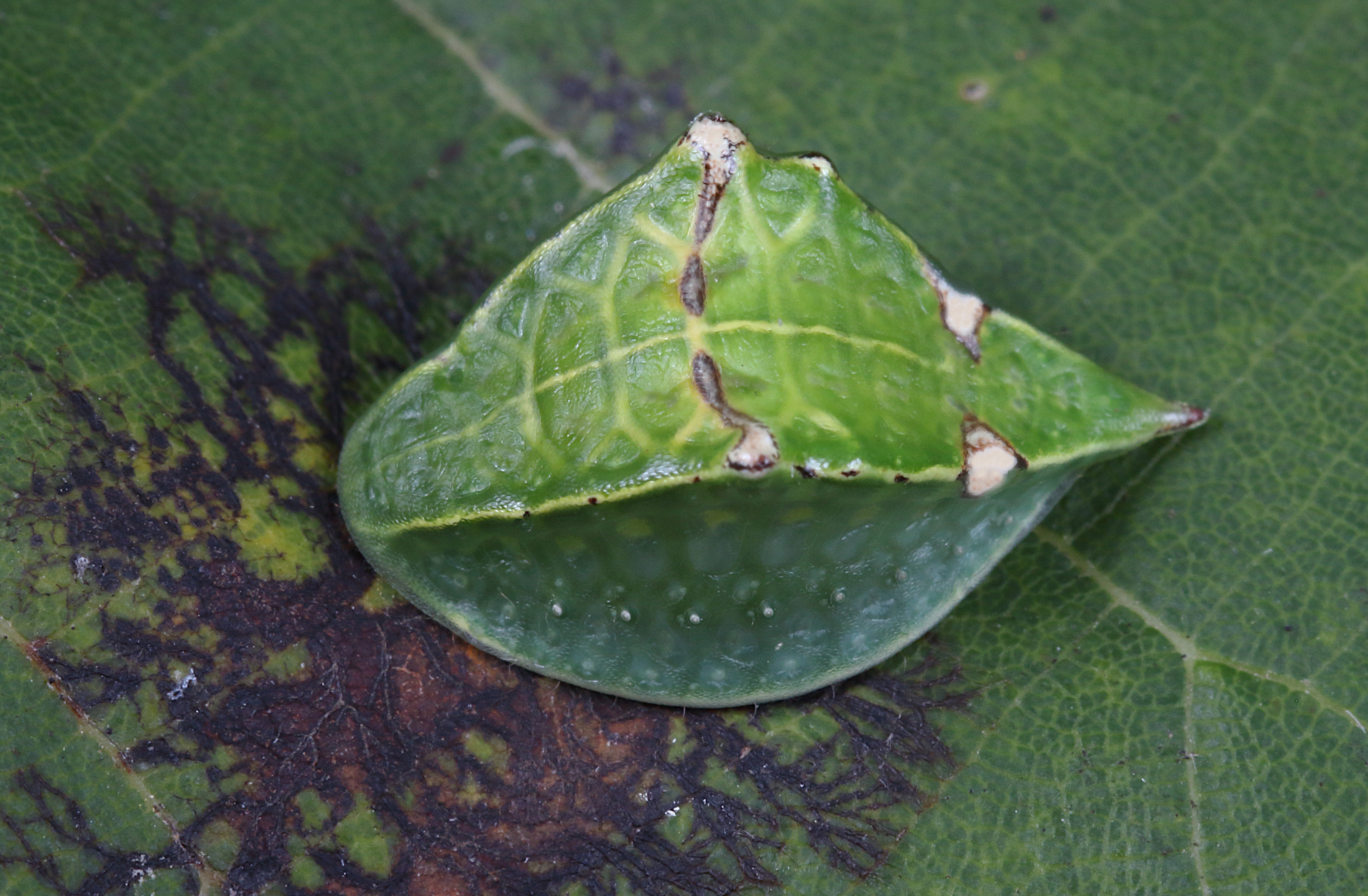 Here is a looper caterpillar Caenurgina sp. These are common in tall grass. 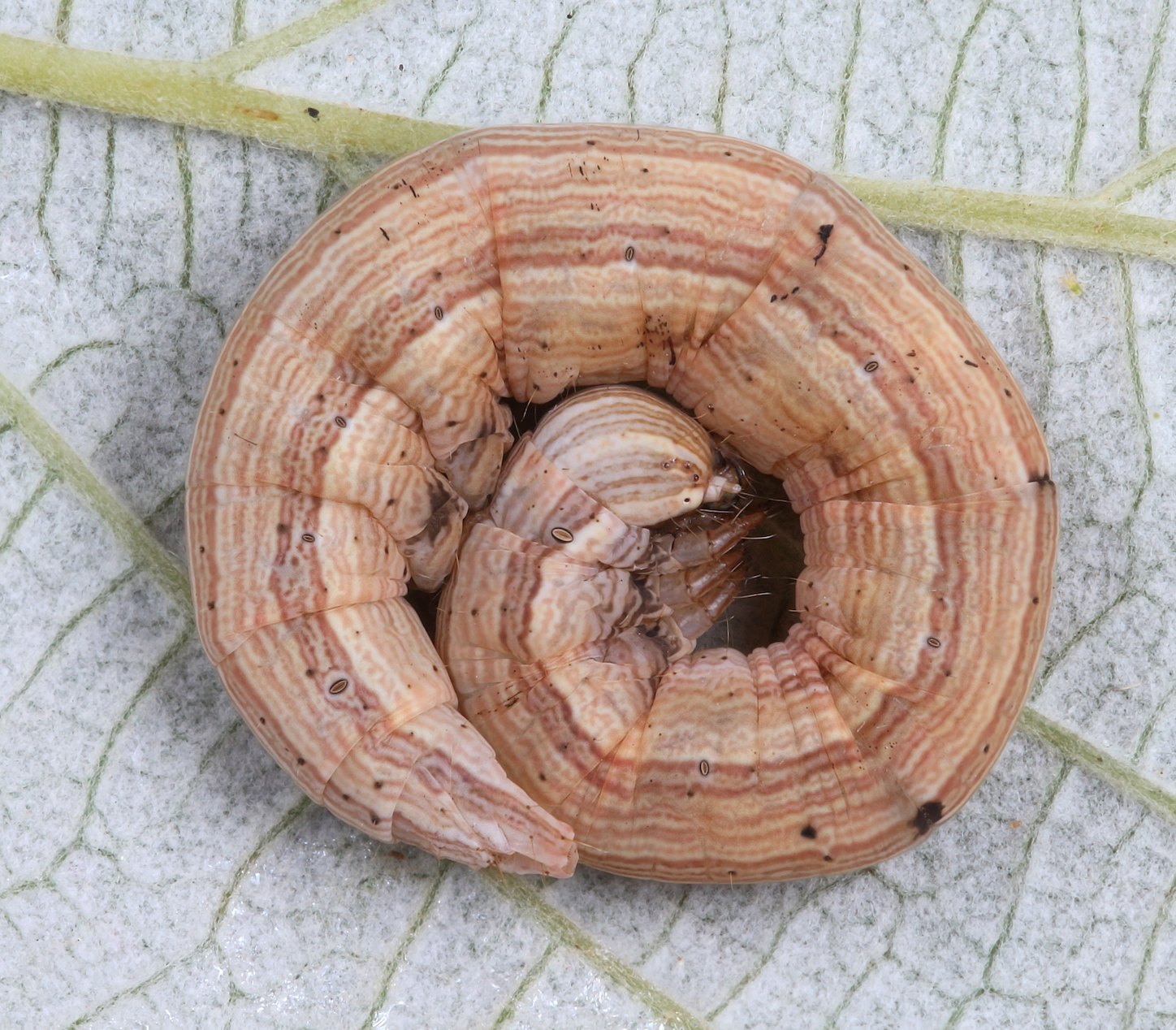 And finally we have the invasive European gypsy moth (Lymantria dispar dispar). The Entomological Society of America has recently moved to de-list this name, as it was deemed offensive. The name “spongy moth” is proposed to be its new common name in North America. In any case, the species has been in my area of Michigan for several years. I used to see one or two a season, but now they are becoming extremely common. Here is a caterpillar. Mature caterpillars like this one are common on tree trunks, and here they will form a flimsy cocoon that is protected by their irritating hairs. It’s common to see several cocoons, some piled on top of each other, lining the furrows of tree bark. 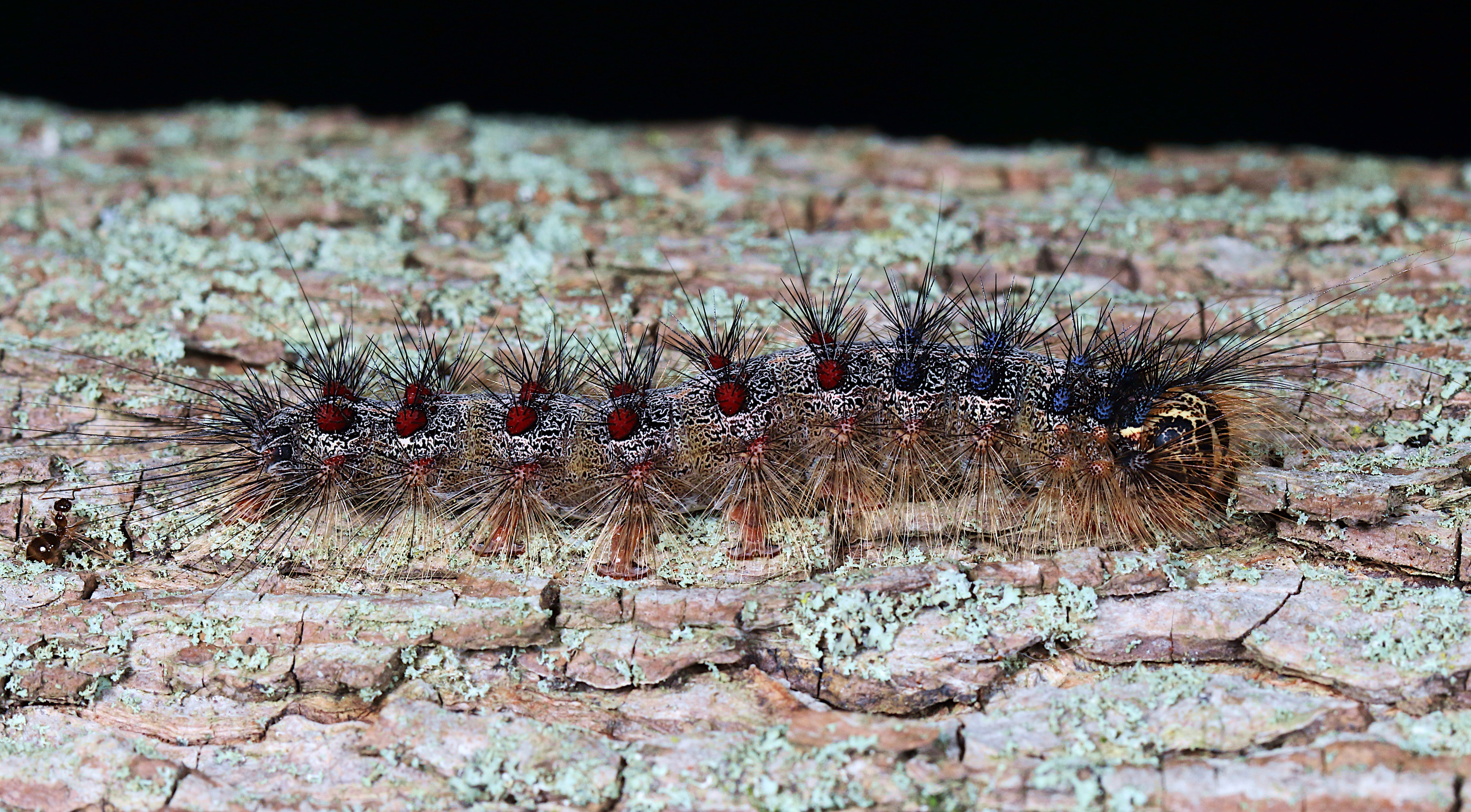 Male moths are often seen perched alertly like this, using their ginormous antennae to sniff out female pheromones. One must admit that their headgear is impressive. 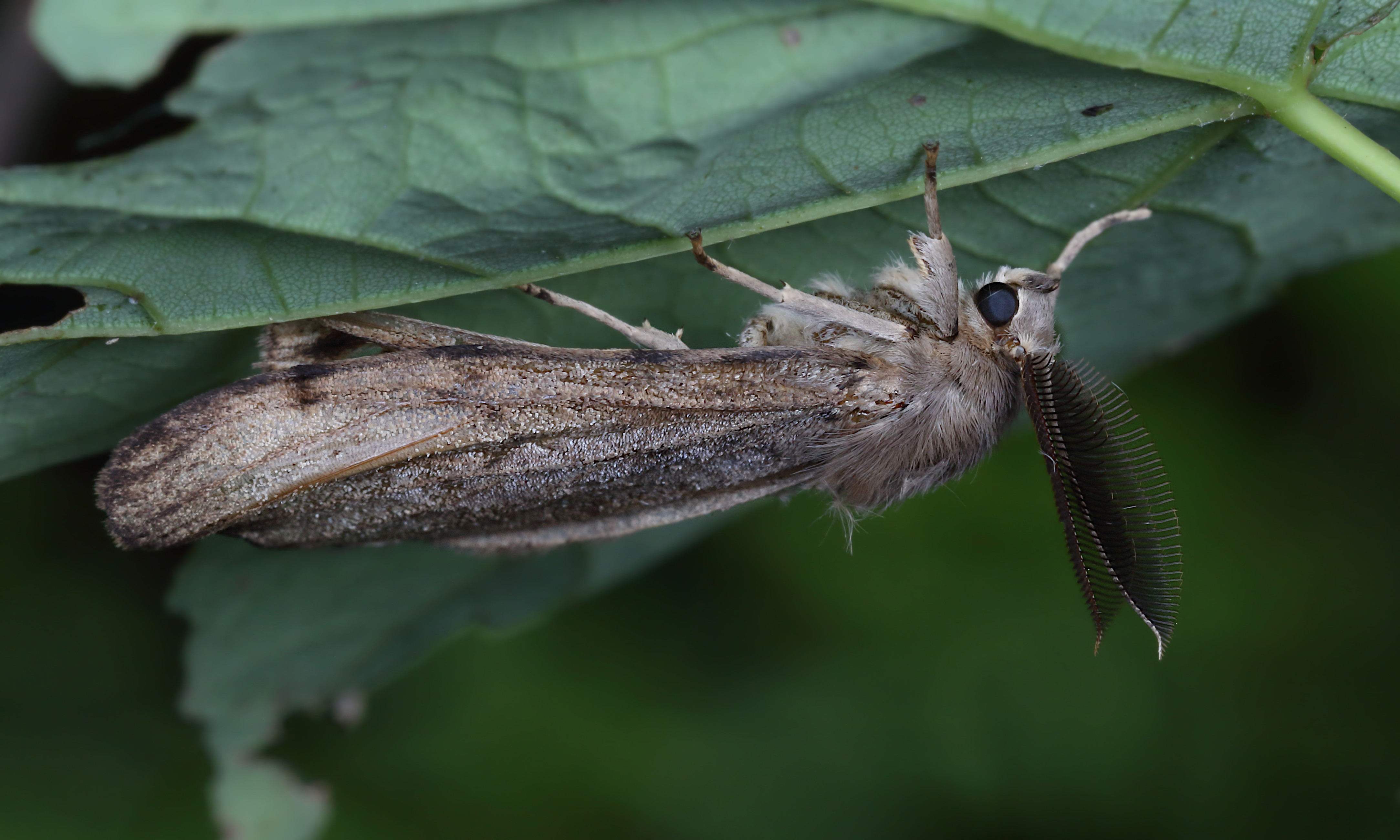 Females are rather odd. They don’t fly but instead continue to rest on tree trunks near their cocoons. Once mated, they make an egg mass that is covered by body hairs as shown here. This tree was dotted with females as far as I could look up, and all the trees nearby were just like it. Here they will sit until they die. 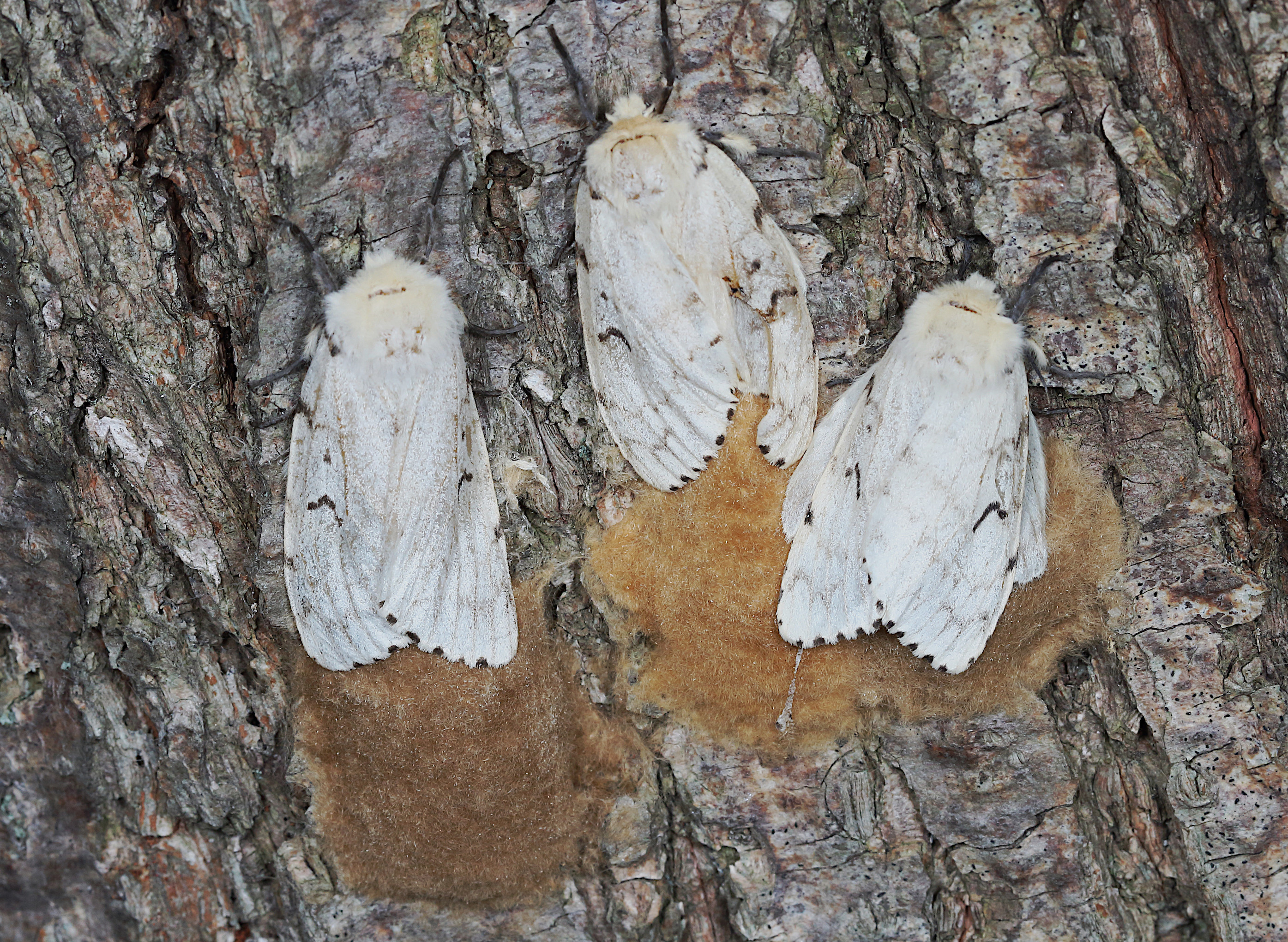 Females in my area tend to have asymmetrical wings, but they don’t fly so it does not matter. Their egg masses have helped gypsy moths to spread across the Eastern US via transport on timber, firewood, and on anything else that moves.

Gypsy moths were introduced into the Eastern US in the 1800s by an idiot who wanted to see if they could be interbred with silk moths. The larvae feed on a very large range of hardwood tree species, and when their populations reach plague proportions they will do considerable damage by defoliation. That has not happened here as far as I’ve seen, but I don’t know what the future will be.  Perhaps readers living in the Eastern U.S. can apprise us about what it’s like now.

On a brighter note, I do see a lot of dead gypsy moth caterpillars. Large numbers succumb to what I suppose is a bacterial disease, and so later in the summer I often heartened to see lots of them hanging limp and dead like this one. 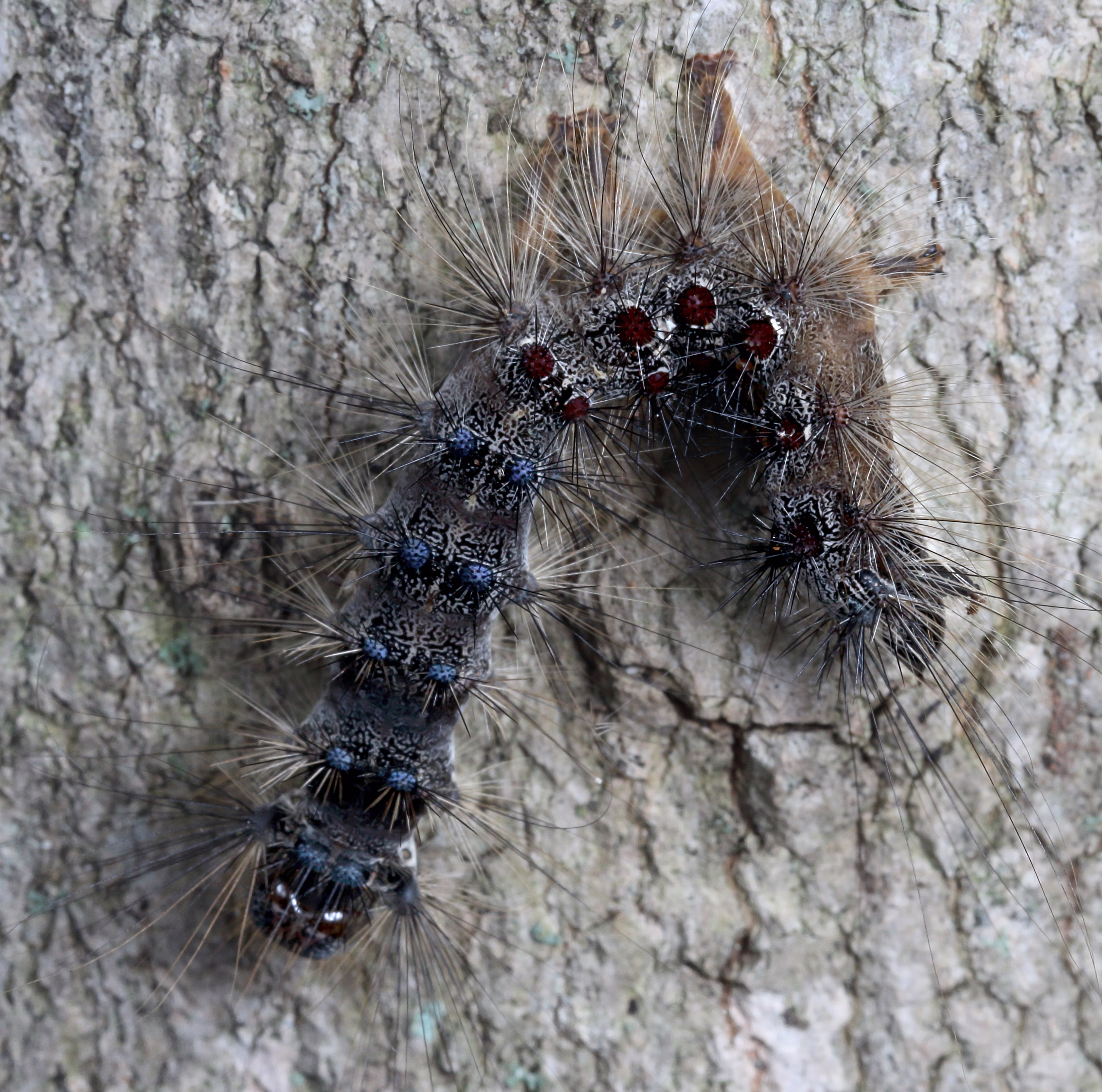 In closing, I am inspired to paraphrase Bette Davis.

“One should never say bad things about the dead.
You should only say good.
This gypsy moth caterpillar is dead.
Good. “