Today we have the second half of Athayde Tonhasca Júnior’s set of Scottish, English, and other miscellaneous signs from around the world (part 1 is here). The captions are his, and you can enlarge the photos by clicking on them.

Still in Falkland, a humble homage to one of the most influential popular music bands. Johnny Rotten (aka John Lydon), the band’s front man, have first disappointed the punk tribe for peddling butter on the telly, and it was all downhill from there. Today Rotten is a poster boy for the life philosophy, “If you are not a liberal when you are young, you have no heart, and if you are not a conservative when old, you have no brain”. 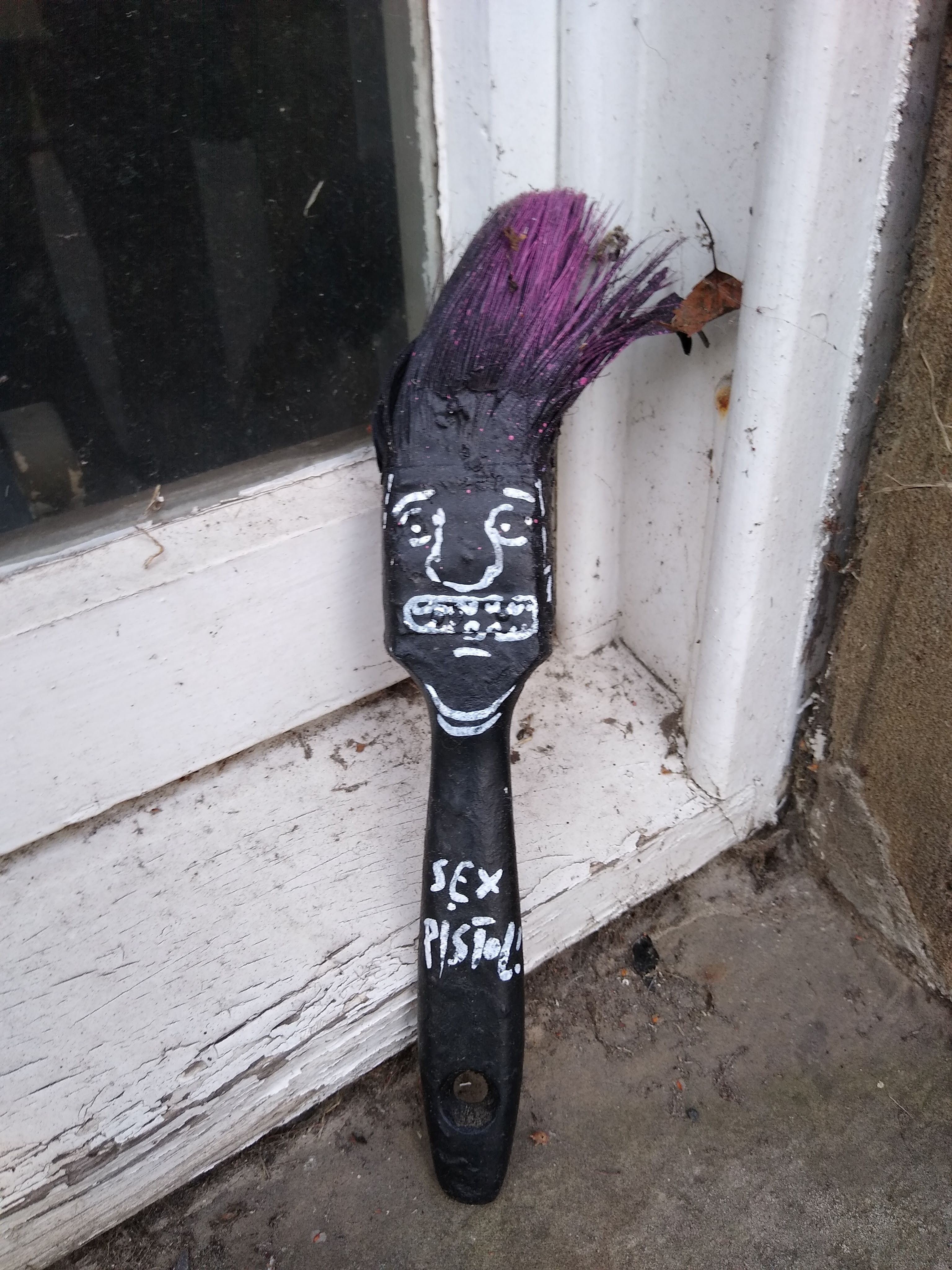 Language & politics: the nationalist Scottish government spent around £2m on new bilingual (Scottish Gaelic/English) road signs with the stated purpose of promoting the endangered language – less than 1% of Scots speak or understand Gaelic. As the great majority of Gaelic speakers live in the Western Isles, this sign in Eastern Scotland mainly manages to delay communication and annoy drivers. The real purpose of these road signs is to assert the cultural differences between Scotland and England.

JAC: Note that I do like these signs, whatever their purpose, as they keep a moribund language alive. 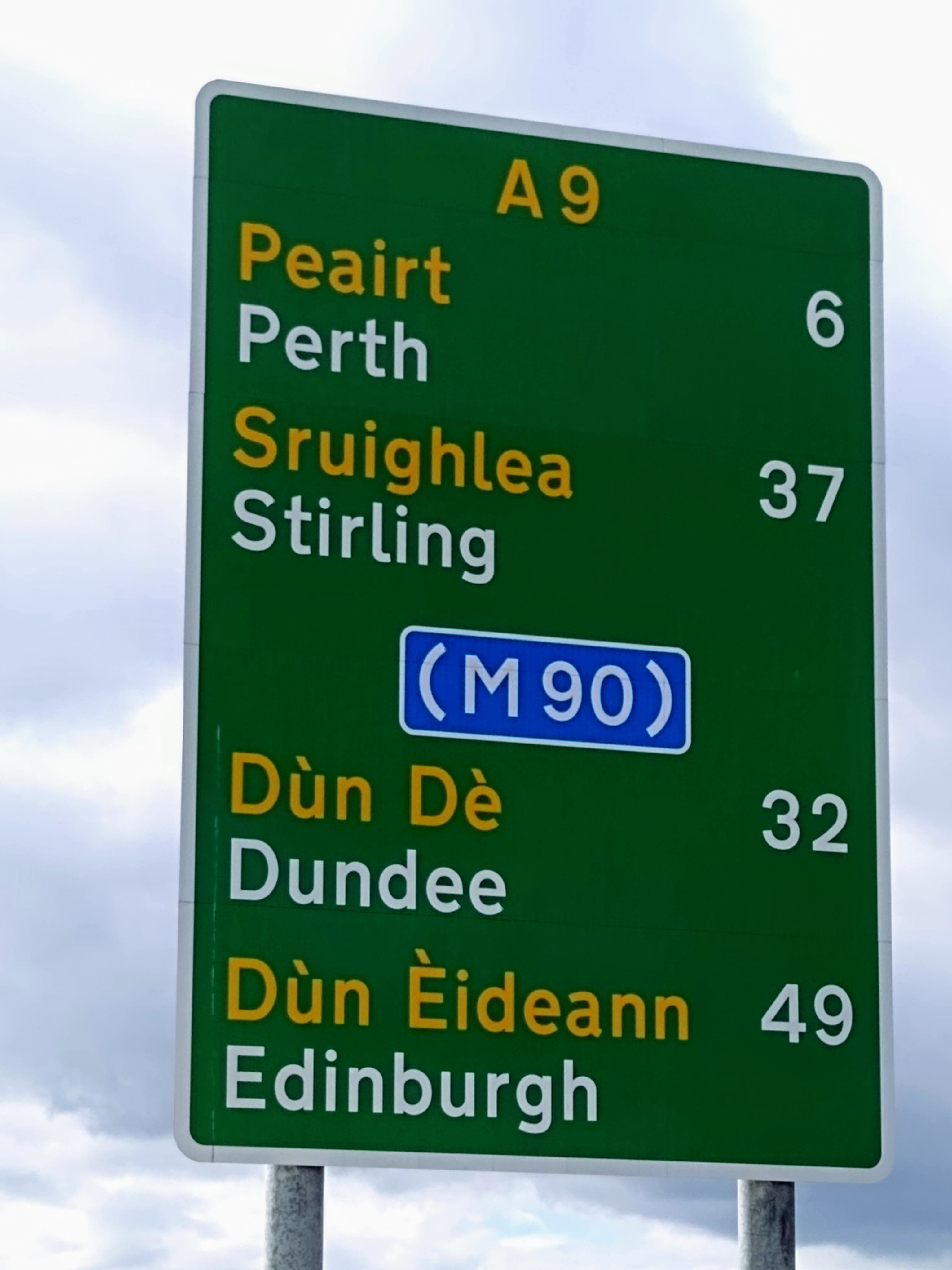 The statue’s inscription doesn’t do justice to the historical consequences of Flavius Valerius Constantinus’ (306-337) acclamation in York. Emperor Constantine I decriminalized Christian worship, and historians have long debated whether the deviant Jewish sect would have survived without the emperor’s patronage. It was touch and go at the time of Emperor Valerian (199-260), but his de-Christianisation programme came to a halt after an unfortunate incident following his capture by the Persians: allegedly, the emperor was forced to swallow molten gold as a punishment for his greed. Without Christianity there would be no Islam, not as we know it, and the world would be a very different place. As the quote of different versions and dubious authorship goes, “Christianity was born in the Middle East as a movement of believers gathered in community; it moved to Greece and became a philosophy; then it moved to Rome and became an institution; then it moved to Europe and became a culture; then it migrated to America, where it became big business”. Constantine may have been a catalyst in this evolutionary process. 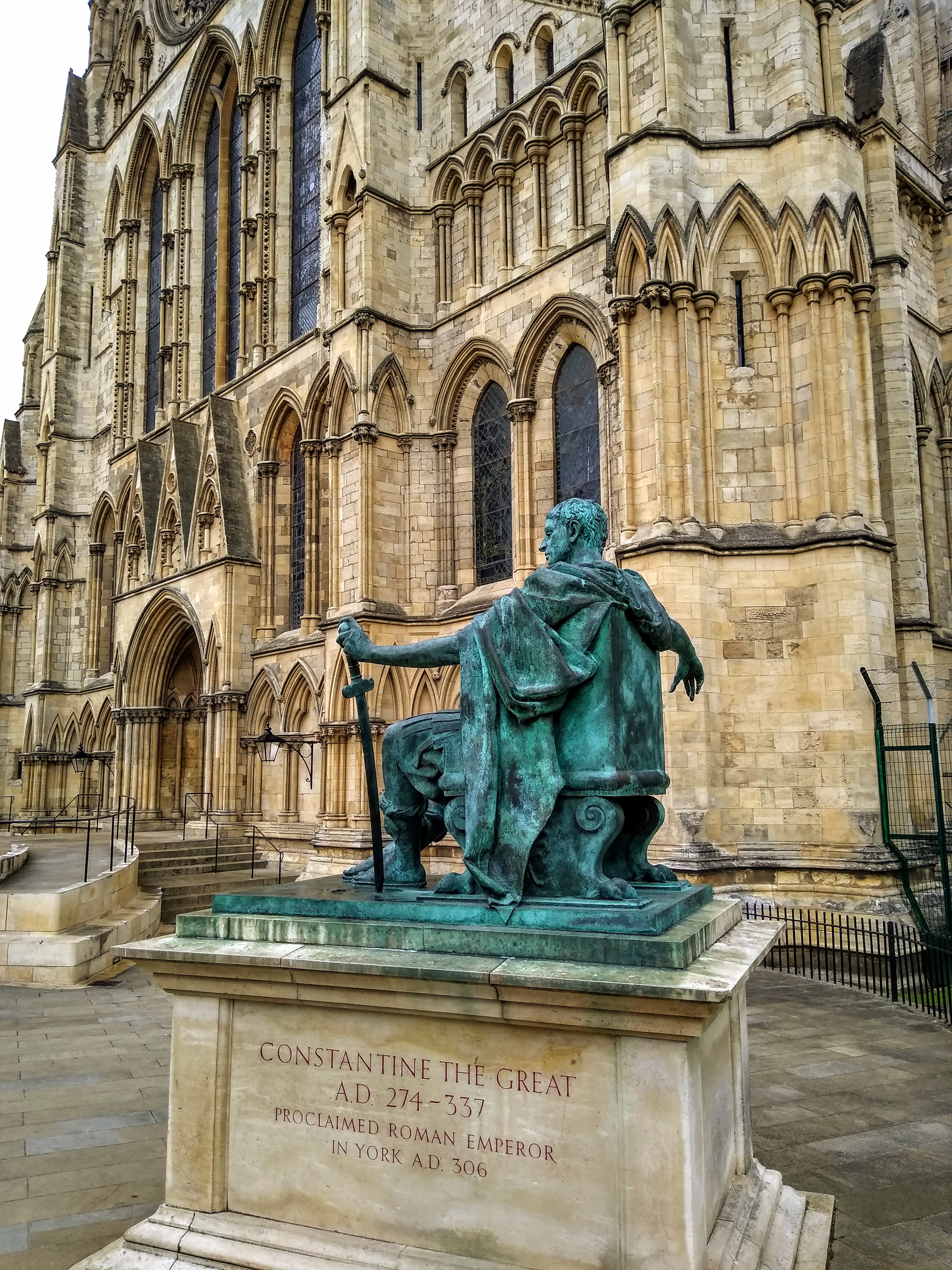 A disgruntled resident expressing his views about an apartment block in Manchester. The words favela and caipirinha have left Brazil and conquered the world: one can order a caipirinha, without translation, in London, Berlin, Rome and Tokyo. But in the age of woke (yes, it has infested Brazil as well) you are supposed to say comunidade (community) instead of favela. It anesthetises reality. 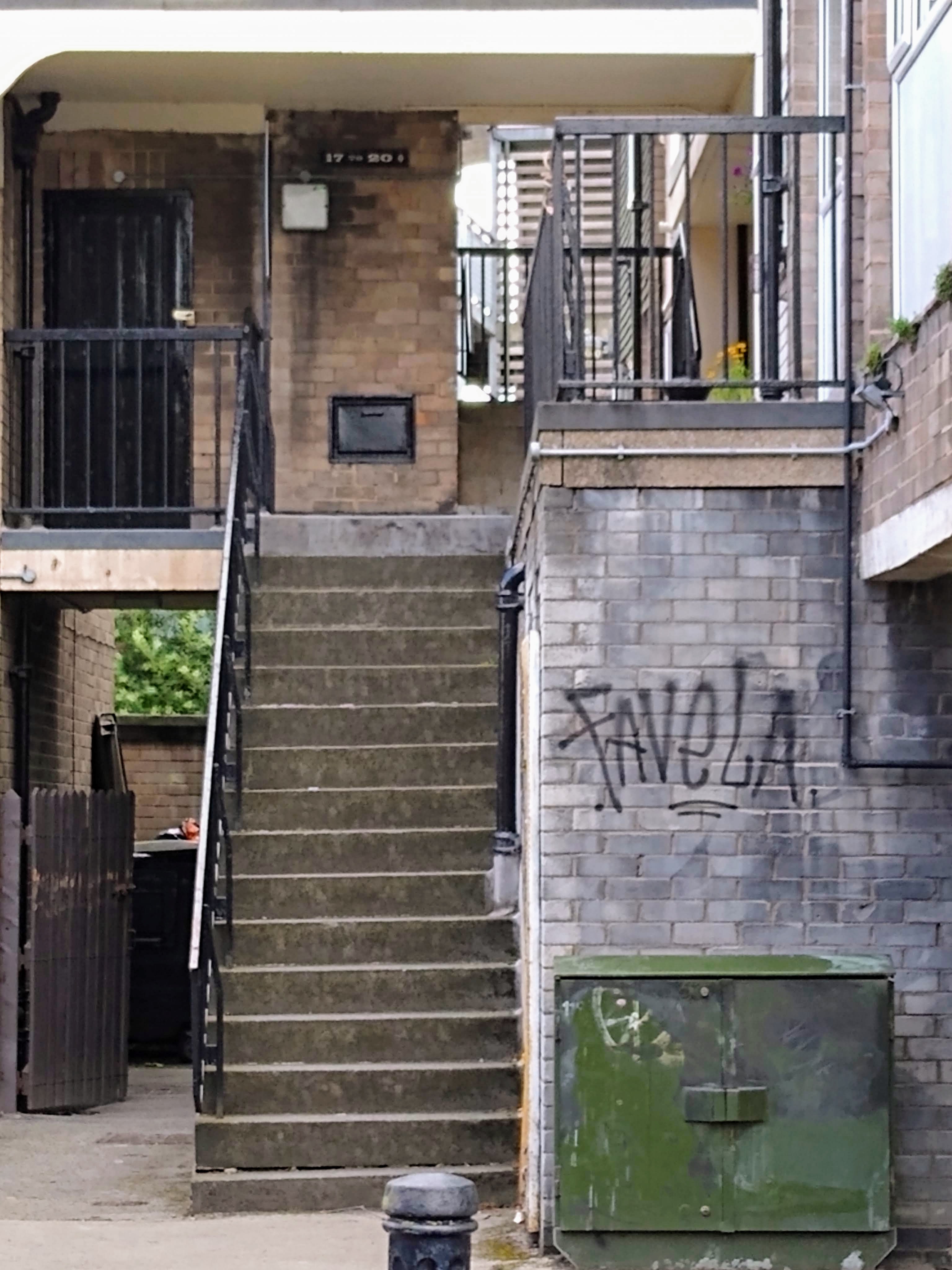 A lovely rhyming sign on a watering trough in S. Miguel, The Azores: “Treat animals well/give them rest and food/ they are not your equals/but they help you to carry on.” 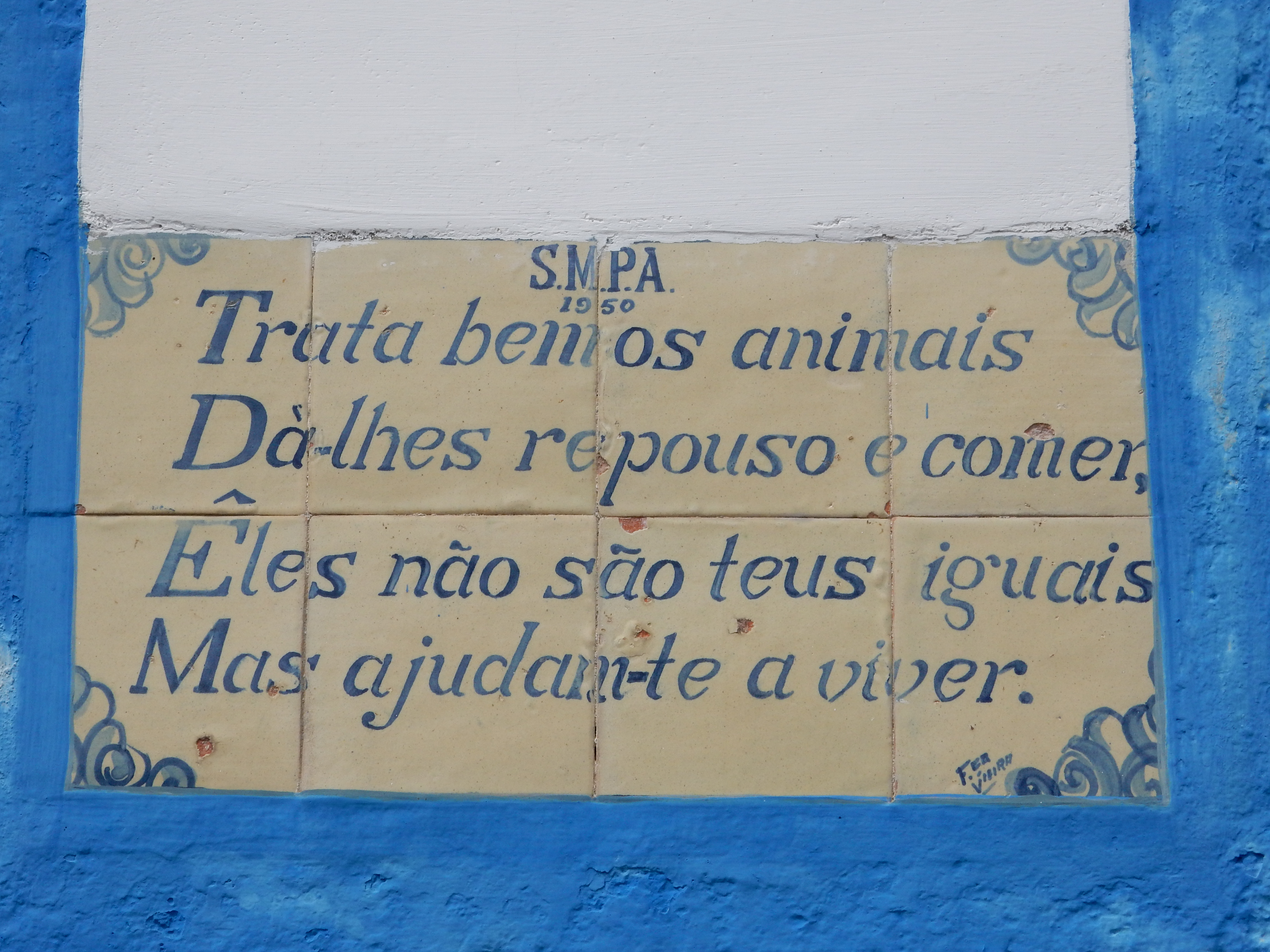 Fatty Patty’s candour is admirable. But we moved along, searching for a bolder even if less sincere option (Padua, Italy). 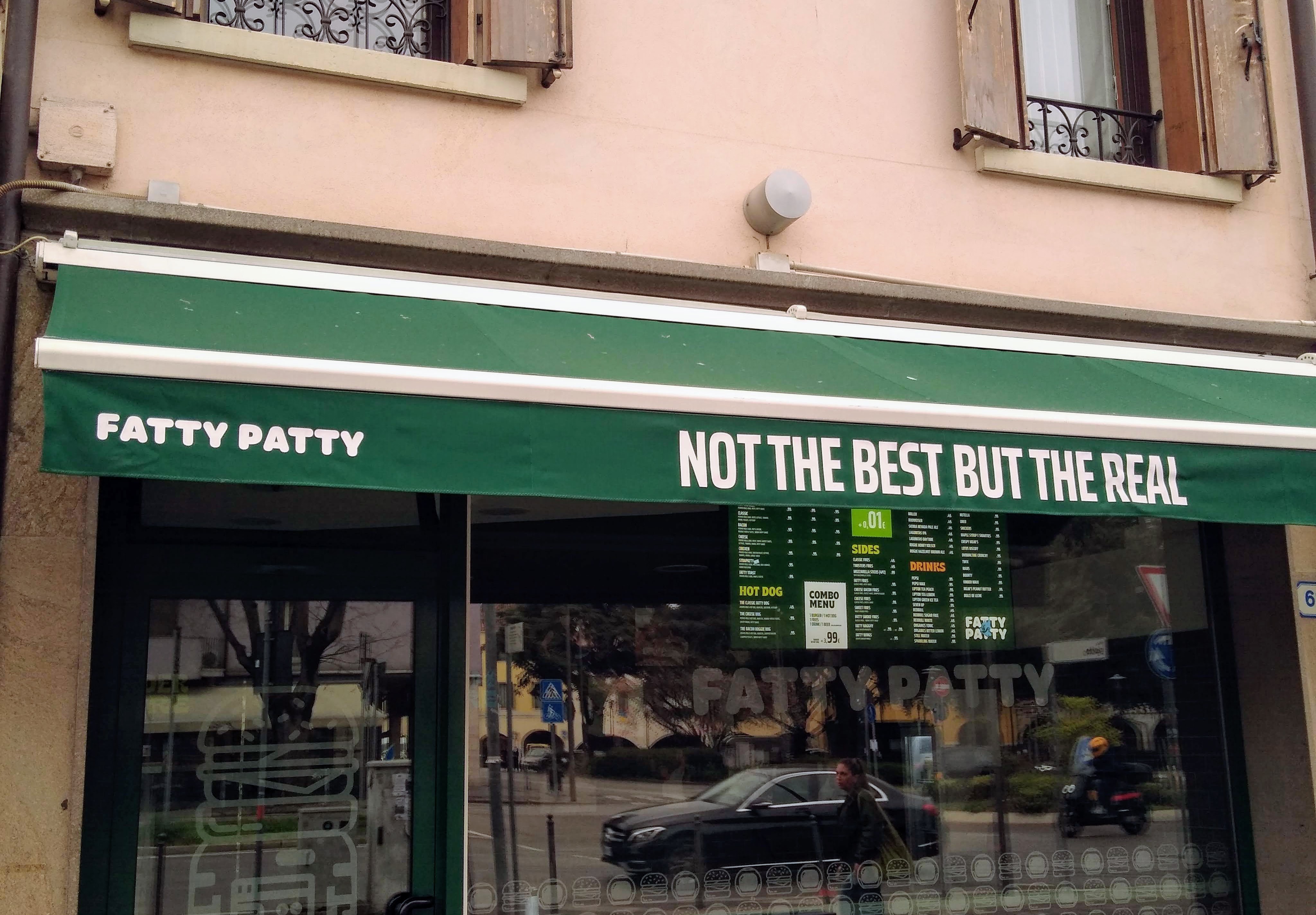 A sight that appalls many tourists: a horse butcher (Padua’s main market). Horse meat is illegal in many countries and there is pressure to ban it in Italy and France. I think the butcher would say that such squeamishness from carnivores is hypocritical and patronizing. 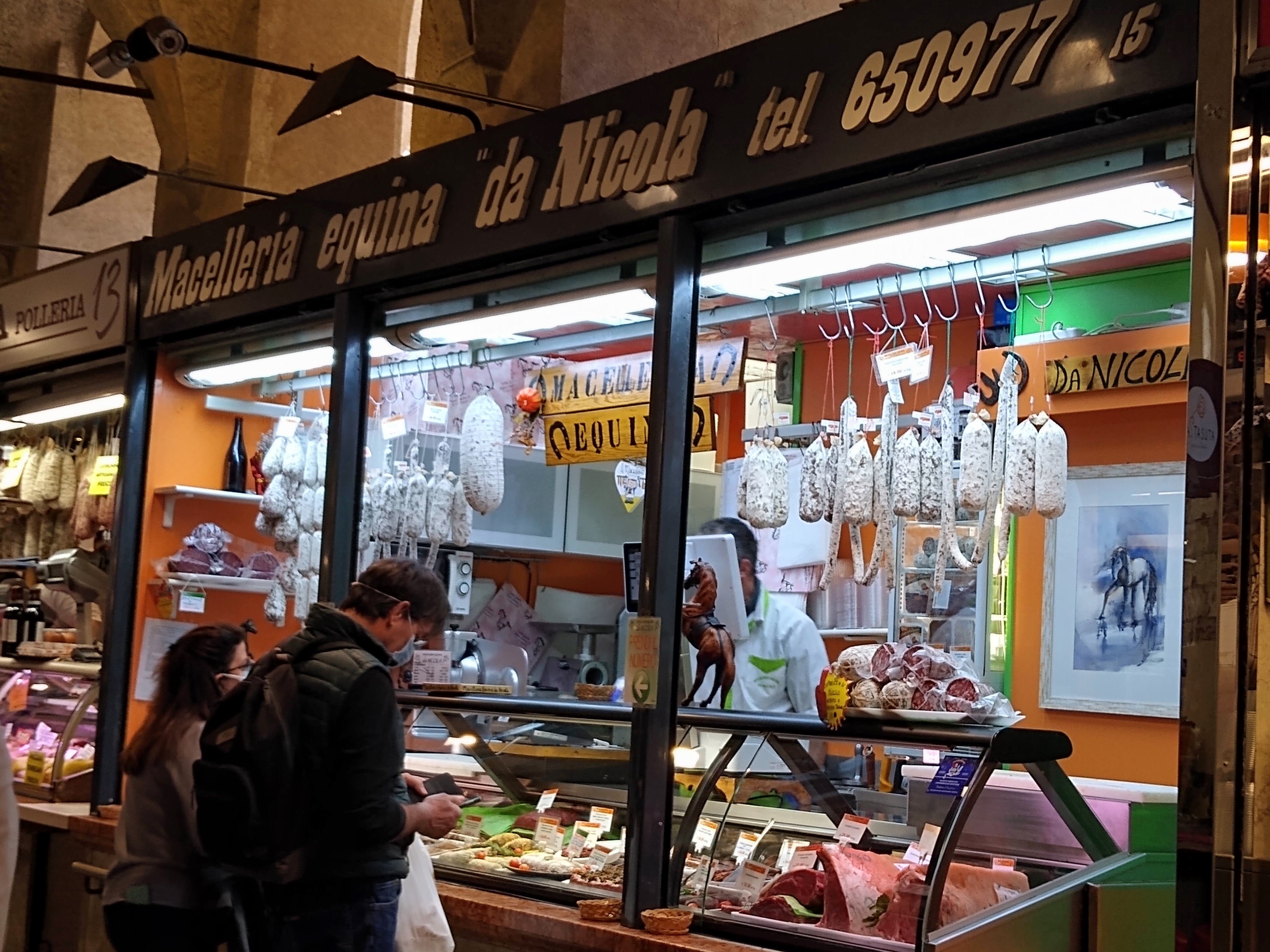 (Two photos) Heraklion Archaeological Museum, Crete. One of the 3,400 clay tablets inscribed in Linear B writing from Knossos Palace. The tablets, dated 1400-1300 BC, are the earliest known texts written in Greek and were preserved only by being accidentally baked by a fire that destroyed the palace. Linear B was deciphered by Michael Ventris, an English architect and amateur linguist. The deciphering story is a remarkable case study of scholarship, tenacity and cleverness. Unfortunately the translated texts are quite boring: mostly lists of goods and records of products for transportation and storage. An earlier script, Linear A, still awaits deciphering.

Carved forms known as Phoenician letters, which gave origin to a Greek alphabet in the 8th century BC. It has a soothing similarity to our alphabet, even before mutating into Etruscan then Latin. Heraklion Archaeological Museum. 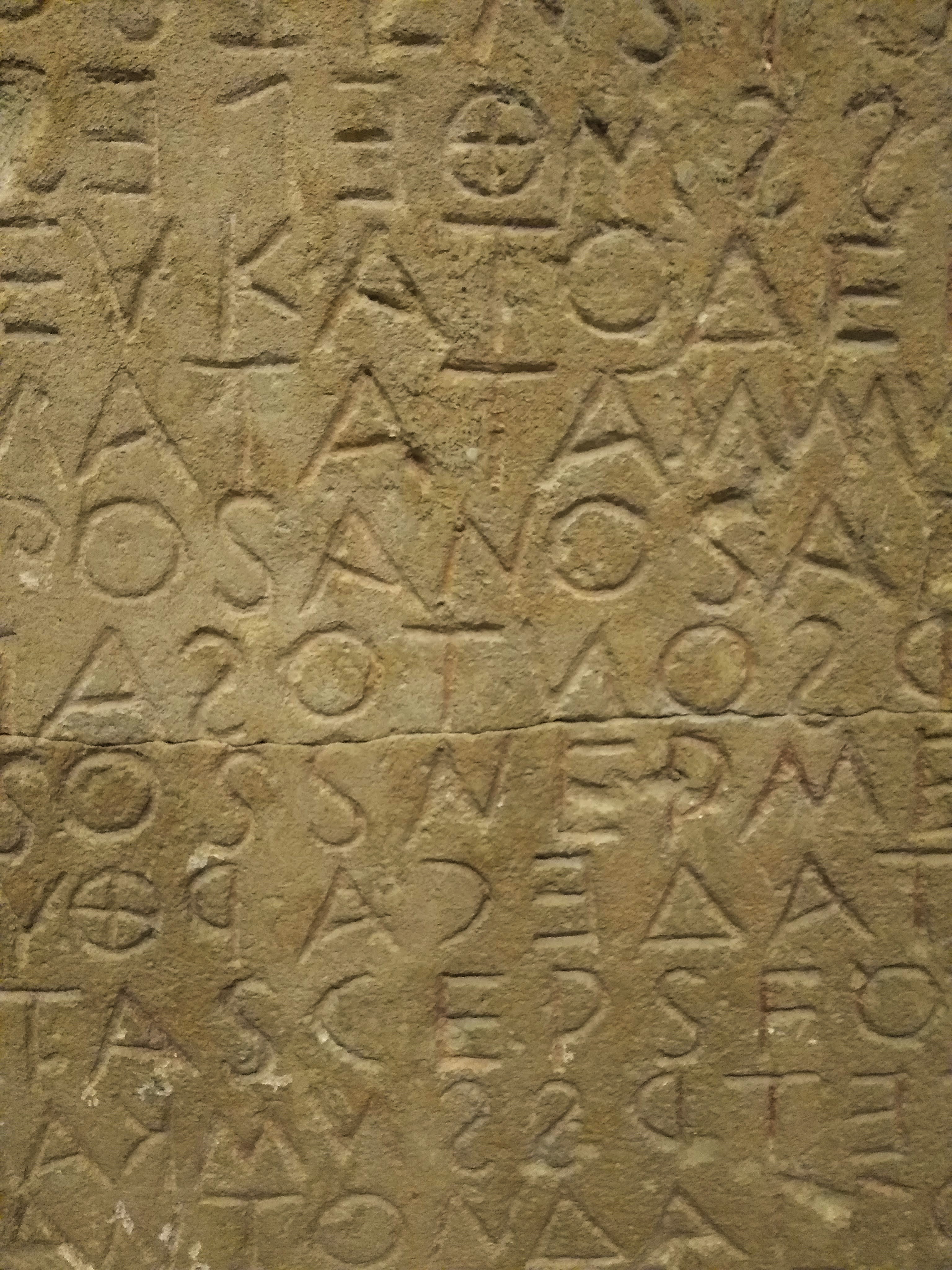 This sign in Chania (Crete) reminded me there are no problems anymore, only “issues”. Steven Poole, author of Unspeak and Who Touched Base In My Thought Shower?, had this to say about this issue: “Calling something a ‘problem’ is bound to scare the horses and focus responsibility on the bosses, so let’s deploy the counselling-speak of ‘issues’. The critic Robert Potts translates ‘there are some issues around X’ as ‘there is a problem so big that we are scared to even talk about it directly’. Though it sounds therapeutically nonjudgmental, ‘issues’ can also be a subtly vicious way to imply personal deficiency. If you have ‘issues’ with a certain proposal, maybe you just need to go away and work on your issues.” 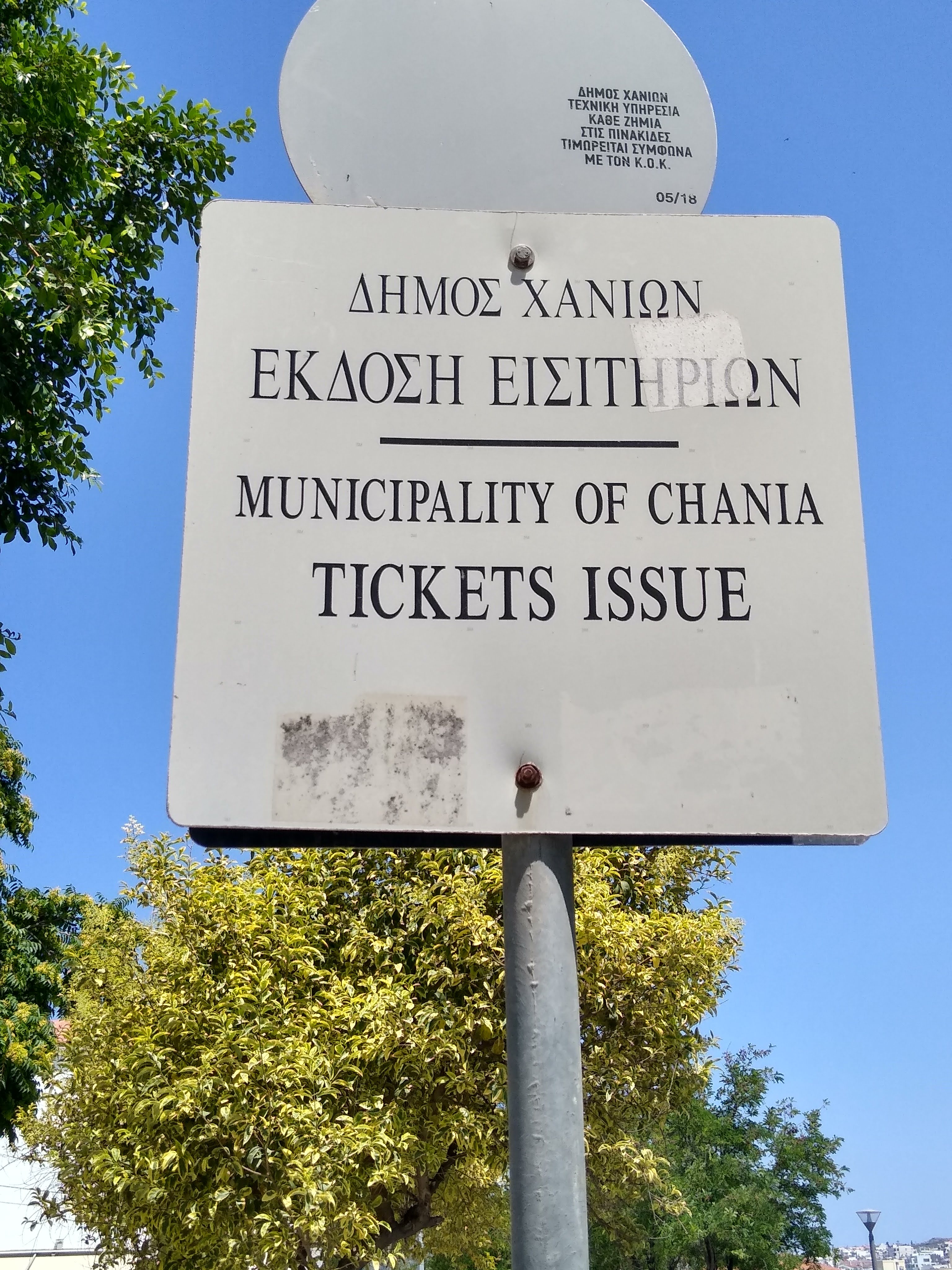 If the letters in this sign in Piracicaba, Brazil, were straightened up, they would spell Centro de Saúde (a hospital). The sign is a fitting allegory for a country nearing calamity. The president, a former army captain who plotted a bomb attack and left the army before being kicked out, has been driving the country’s education, science, technology, welfare, legal system and environment to dilapidation. Many Americans think Trump is the worst thing to befall a country. Jair Bolsonaro proved them wrong. 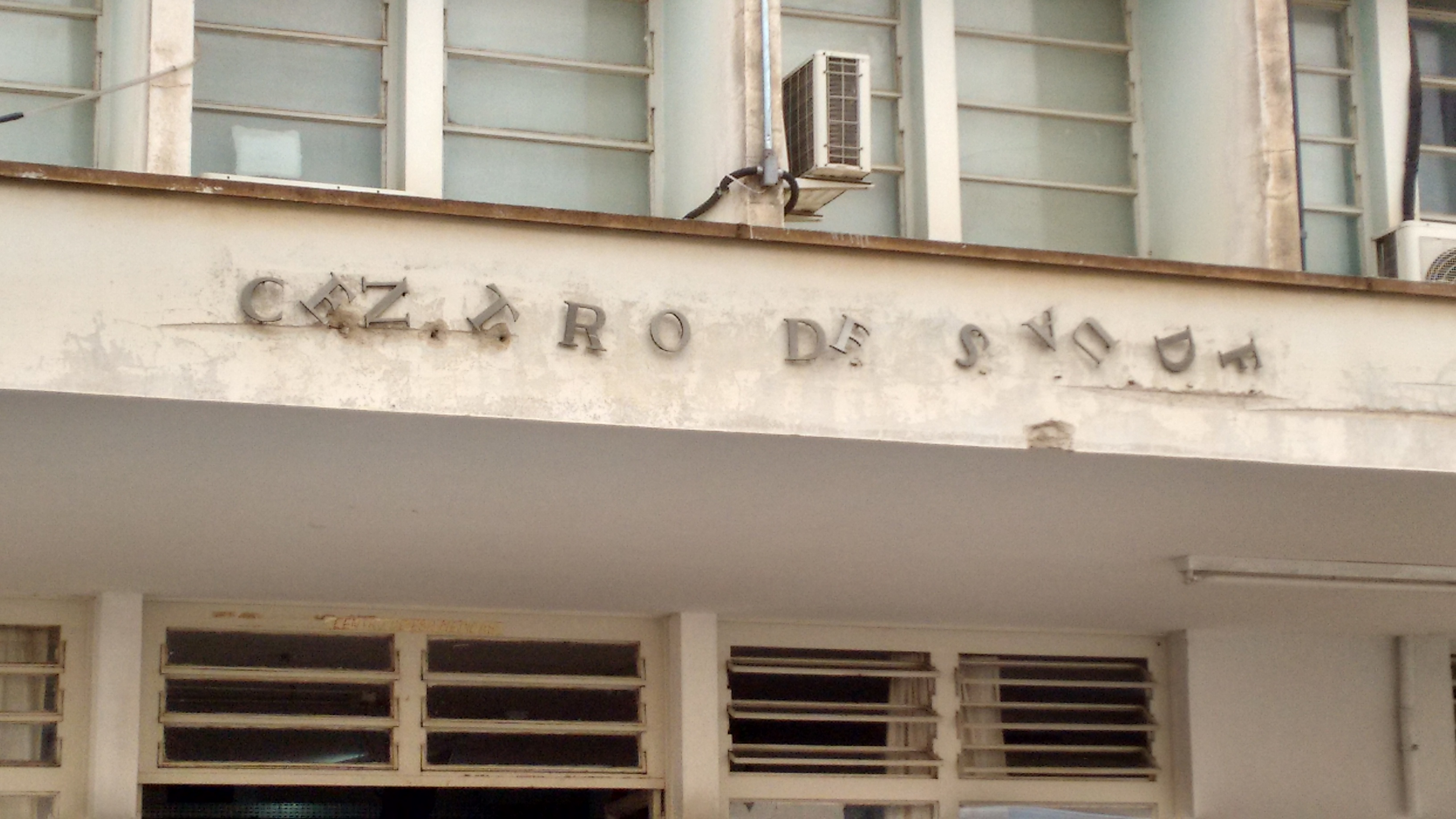 Many business in Brazil adopt English names for their kudos. But dictionaries are not often consulted, with awkward consequences. The entrepreneur behind this sign in Curitiba may have thought of “trail-blazers” or “non-conformists”. 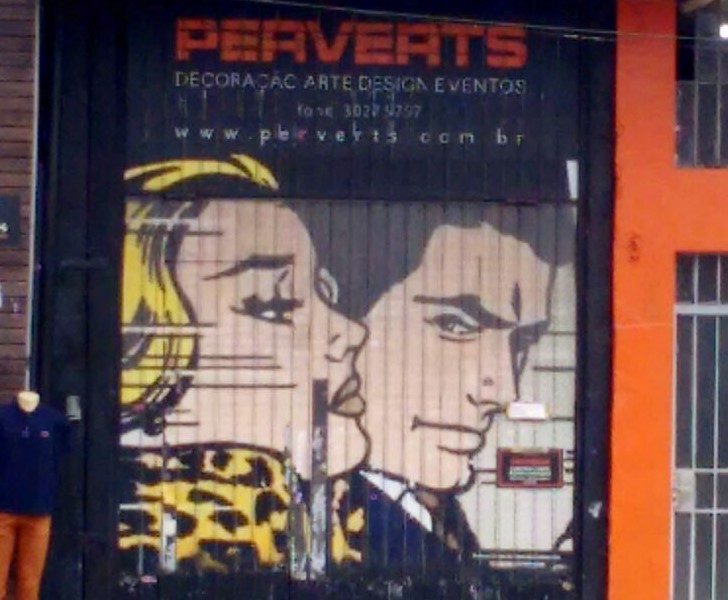