I’ll be brief, as I’ve already written too much about duck rescue.  Last night, just as I was sitting down to eat my dinner and watch the NBC Evening News, eager to see the accusations that came to light in Tuesday’s testimony, my phone rang. It was a member of Team Duck who said something like, “I didn’t want to bother you, Jerry, but I think I see a single baby on the pond. I knew you’d want to know.”

The laws of physics dictated that I put my dinner down, turn off the tv, and drive to the office to get the duck rescue equipment: in this case, one net and a small box lined with paper towels.  And indeed, there was a single lone, peeping duckling in the pond following two hens, with Audrey’s Killer Brood nearby.  I’m not sure whether one of those hens was its mother, but a rescue was mandated.

It was easy peasy this time: the hens flew out of the pond and the baby swam to a corner of the channel. (I had changed into swimming trunks and a tee shirt.) Easing into the water, I approached the little peepster, put the net on one side of it and slightly below it and went for it with my hand on the other side. It was trapped, and so swam into the net. Triumph! It was barely even wet.

We dried it off and drove it to the rehab lady immediately. It turned out to be one of the liveliest ducklings I’ve ever caught, bouncing around in the padded box and peeping as we drove it to rehab. Luckily, although our wonderful duck-saver is leaving for two weeks’ vacation today, she hadn’t yet sent yesterday’s ducks out for rehab. So the little guy below joined the mob, and today they’ll all be in expert hands.

It’s obviously a one-day-old duck: look at the “egg tooth” on the bill that it uses to peck its way out of the egg (see fact #5 here). This structure is not a real tooth, but a hard part of the bill used for egg egress. You can see it as the light-colored semicircle at the tip of the bill. That clearly shows that this was a newborn.  The “egg tooth” drops off after a day or so.

Of course I went home and went through the entire showering/deparasitizing routine again, but I still suspect in about two weeks I’ll be itching like hell from dead larvae in my leg. Those parasites bore in fast!  So it goes; it doesn’t worry me. Total for the day: seven saves. 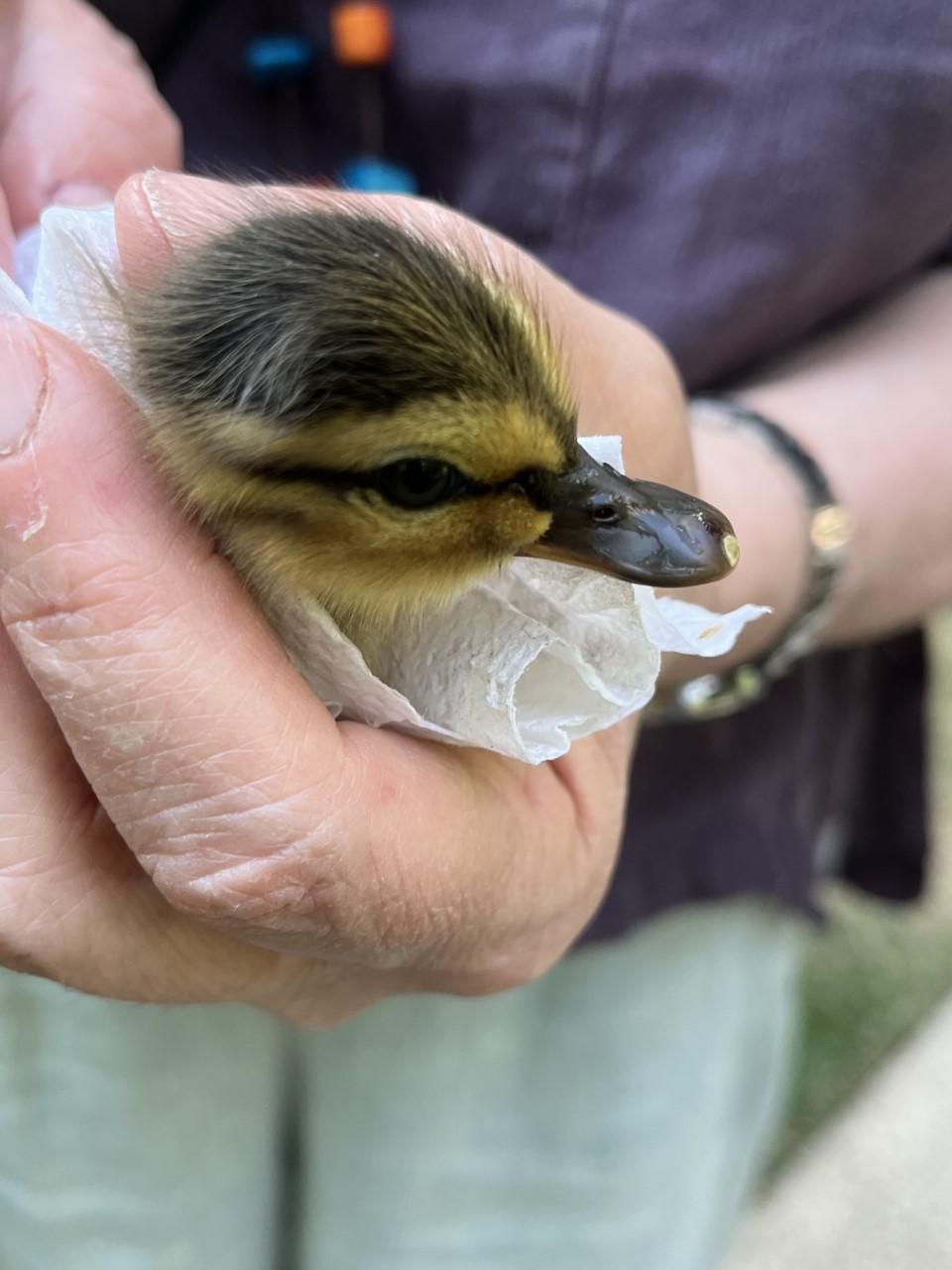 13 thoughts on “A new record: twice in the pond in a day (one more duckling saved)”