I’m two weeks behind on the duck report, so the fluffy babies you see below are now teenagers that are sprouting feathers and growing wings. But we’ll catch up. Today we feature Audrey and her brood of 12 (yes, we have them all), eating, sleeping, and disporting themselves. We have a combination of photos and videos—the latter nearly all taken by Jean Greenberg.

First, attentive mom Audrey watching her pile o’ ducklings on the cement rim of the pond;

A closer view of the Pile:

June 11: The babies start flapping their tiny little wings, as you can see in this video.

And, on the same day, we have that famous libation, “Ducks on the rocks” (with pond water):

Duckpile on June 12. Audrey is NEVER far from her babies.

The brood is resting in the leaves under the crabapple tree. See how well camouflaged they are on the ground. (One is in the water.)

Mom’s presence gives them away, though.  Male mallards are not camouflaged but conspicuous (to predators, too). That’s the price that sexual selection exacts from males.

By June 14, the babies were dabbling (turning upside down and foraging on the bottom of the pond). This is the characteristic feeding behavior of mallards:

On June 16 a great blue heron (Ardea herodias) came to the pond. It was clearly fishing, standing in one spot on a cement ring and motionlessly looking for fish. It didn’t seem to have any interest in the ducks, so I Iet it fish for a while before driving it away. (It didn’t catch anything.) These are magnificent birds, especially when they spread their wings to take off, almost in slow motion. 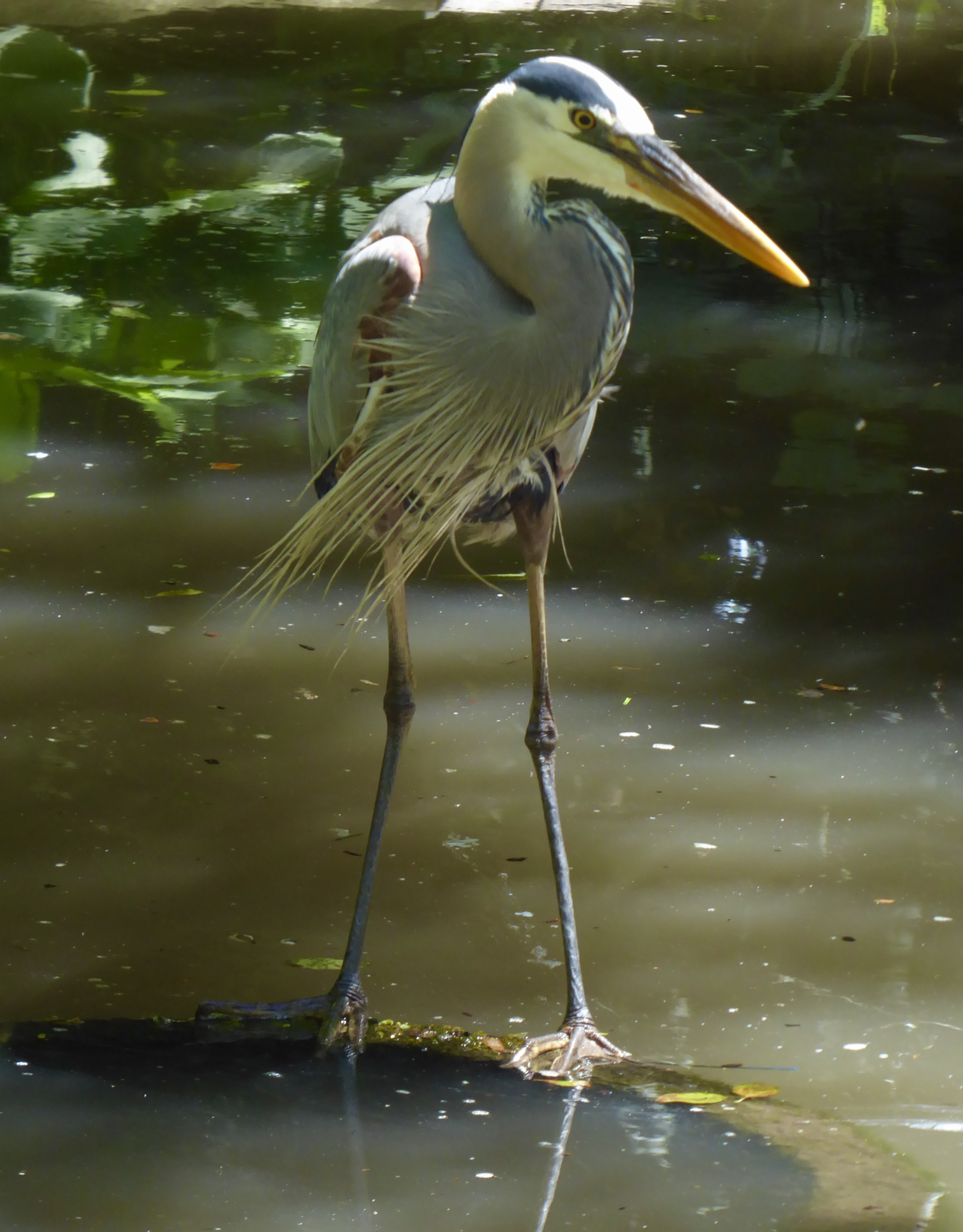 They have immense powers of concentration!

June 17. The plump little ones plop into the water, and yes, with a distinct “plop”:

We do not feed the drakes or undocumented hens, but they get plump anyway. Here’s one hanging his crop over the edge of one duck island, making what we call a “Dali Duck” because of Dali’s melting-watch paintings. Photo by Jean Greenberg. 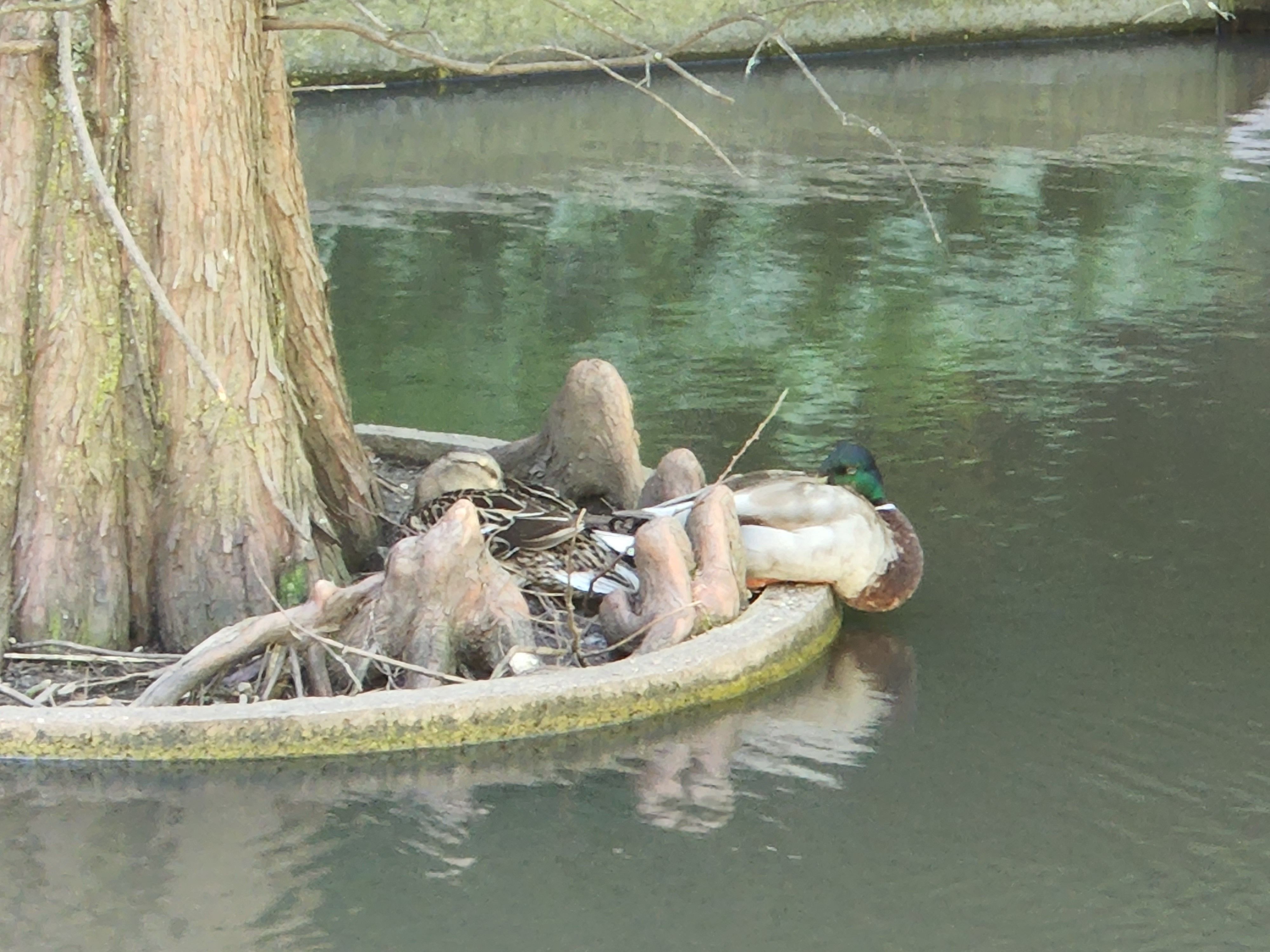 The onset of feather growth is somewhat variable, but they all start getting them within a few days of each other: 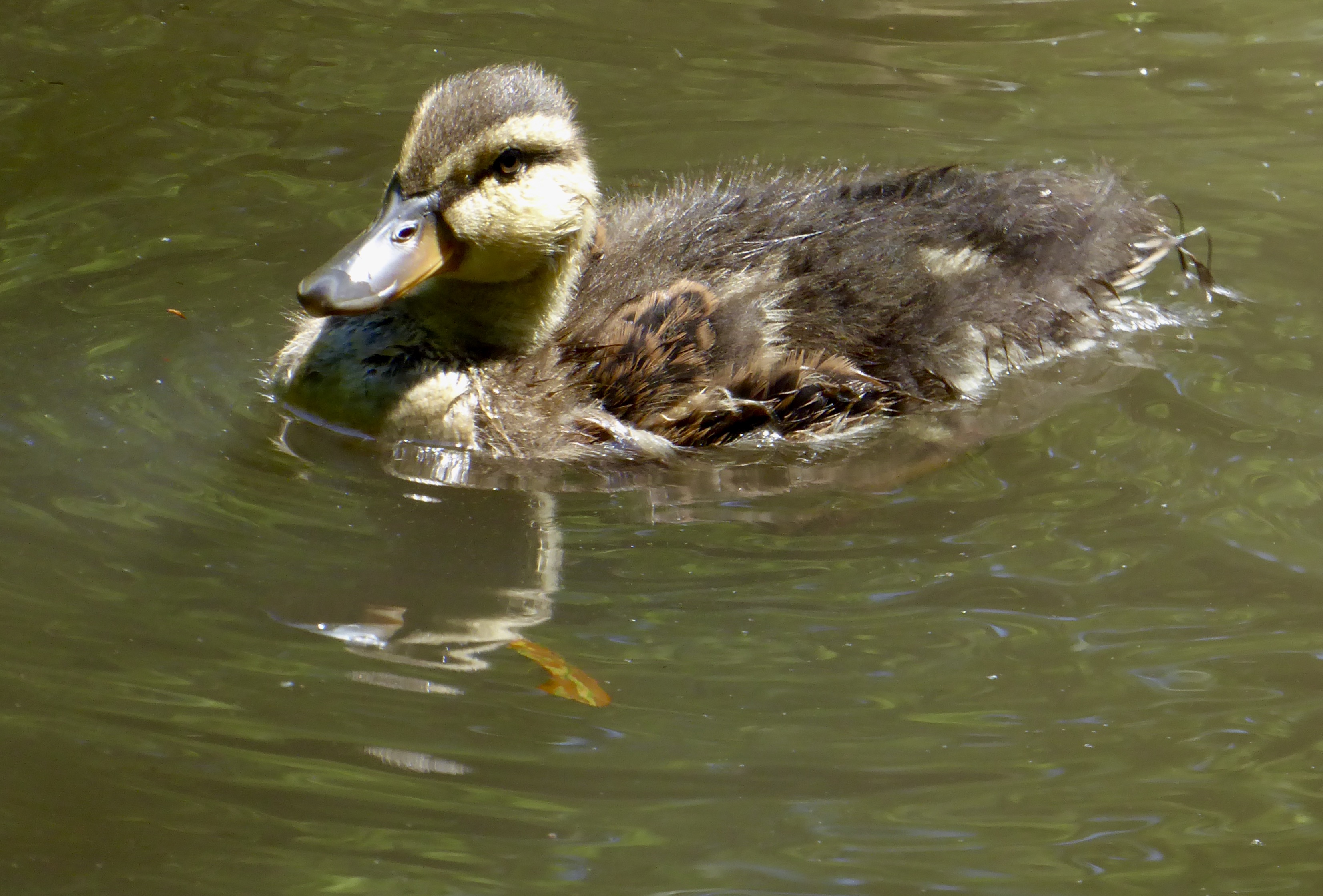 Audrey oversees the brood dabbling away in the main pond:

Duckwatcher Elise took a picture of me photographing the ducks when I wasn’t looking: 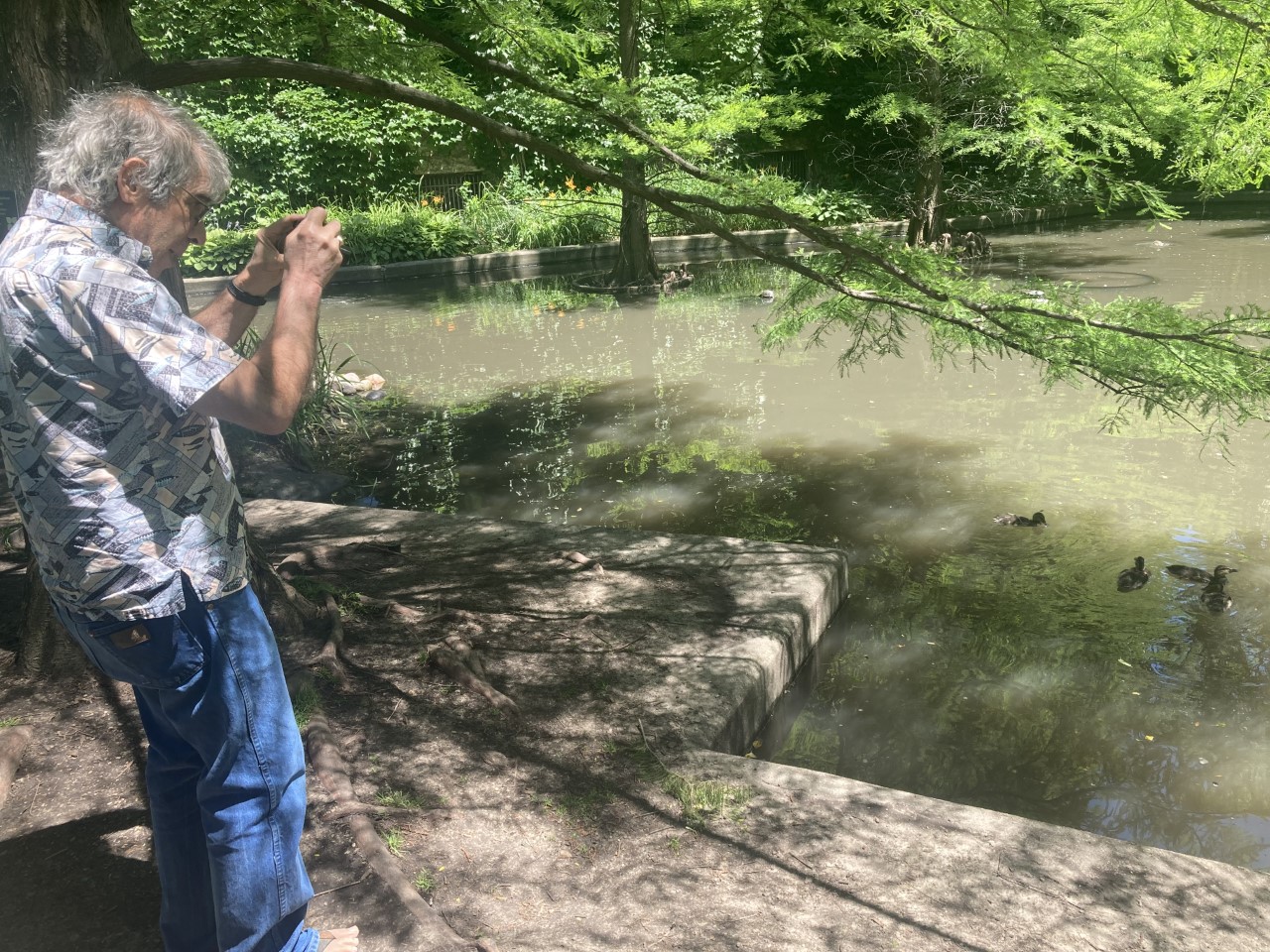 Finally, we mustn’t forget the turtles. I met a guy the other day who comes to the pond on sunny days and counts the basking turtles, trying to get a complete census. He says he’s never seen more than 14. I would have thought there were more than that. Here’s one of our red-eared sliders.

And today I met a guy at the pond with his wife and kid. His daughter and wife liked the ducks (and we gave them duck food to feed the babies), but he says he’s a “turtle man.” He rolled up his sleeve to show me how much of a turtle man he was! 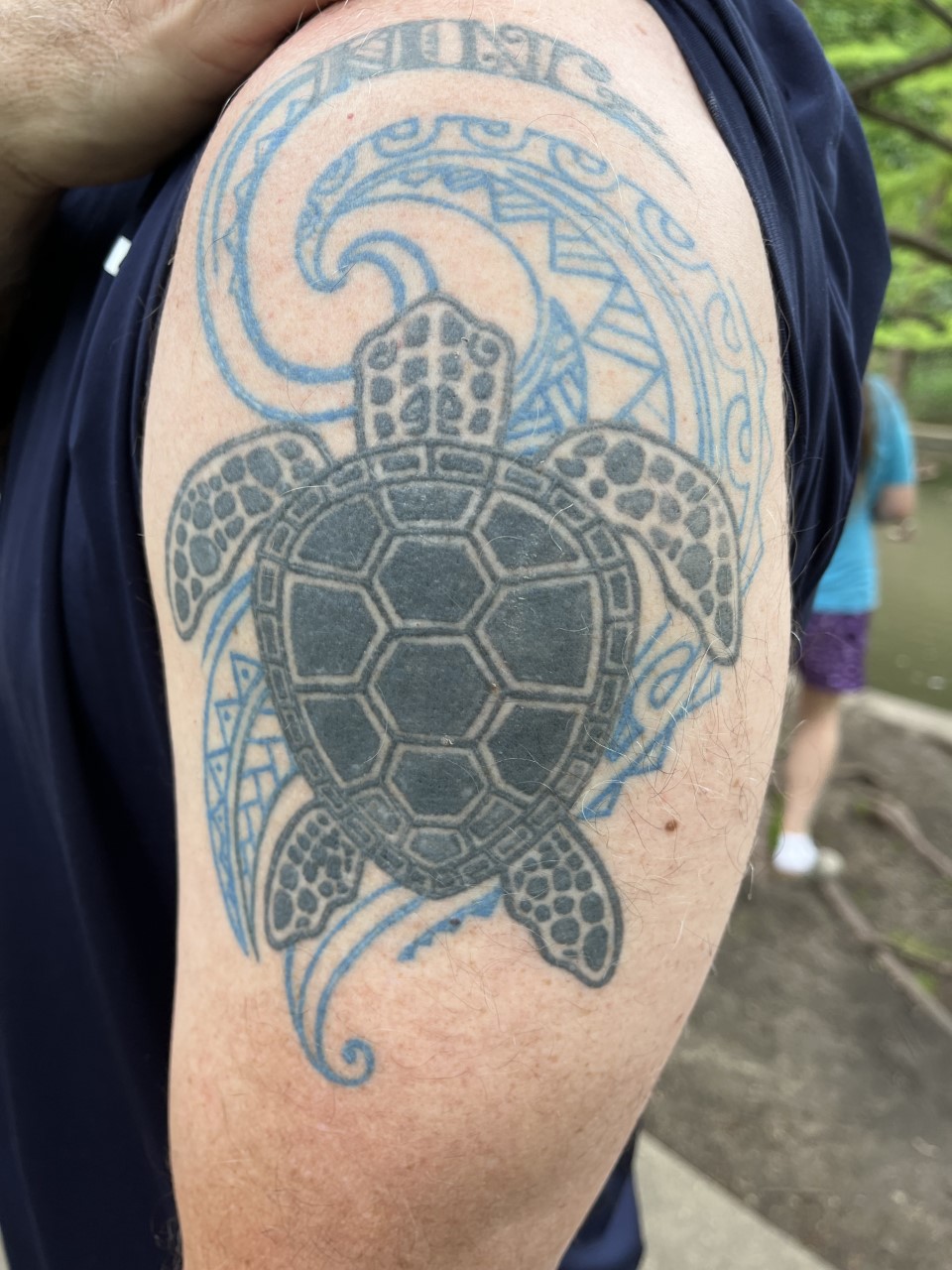