This article from ScienceAlert also references supporting scientific papers, though I haven’t read them. What it shows is that catnip has a side effect on felids (beyond getting them stoned) that is likely to be adaptive. Yes, it gets them high, too, but perhaps they are attracted to the high because of the other benefits of ‘nip. 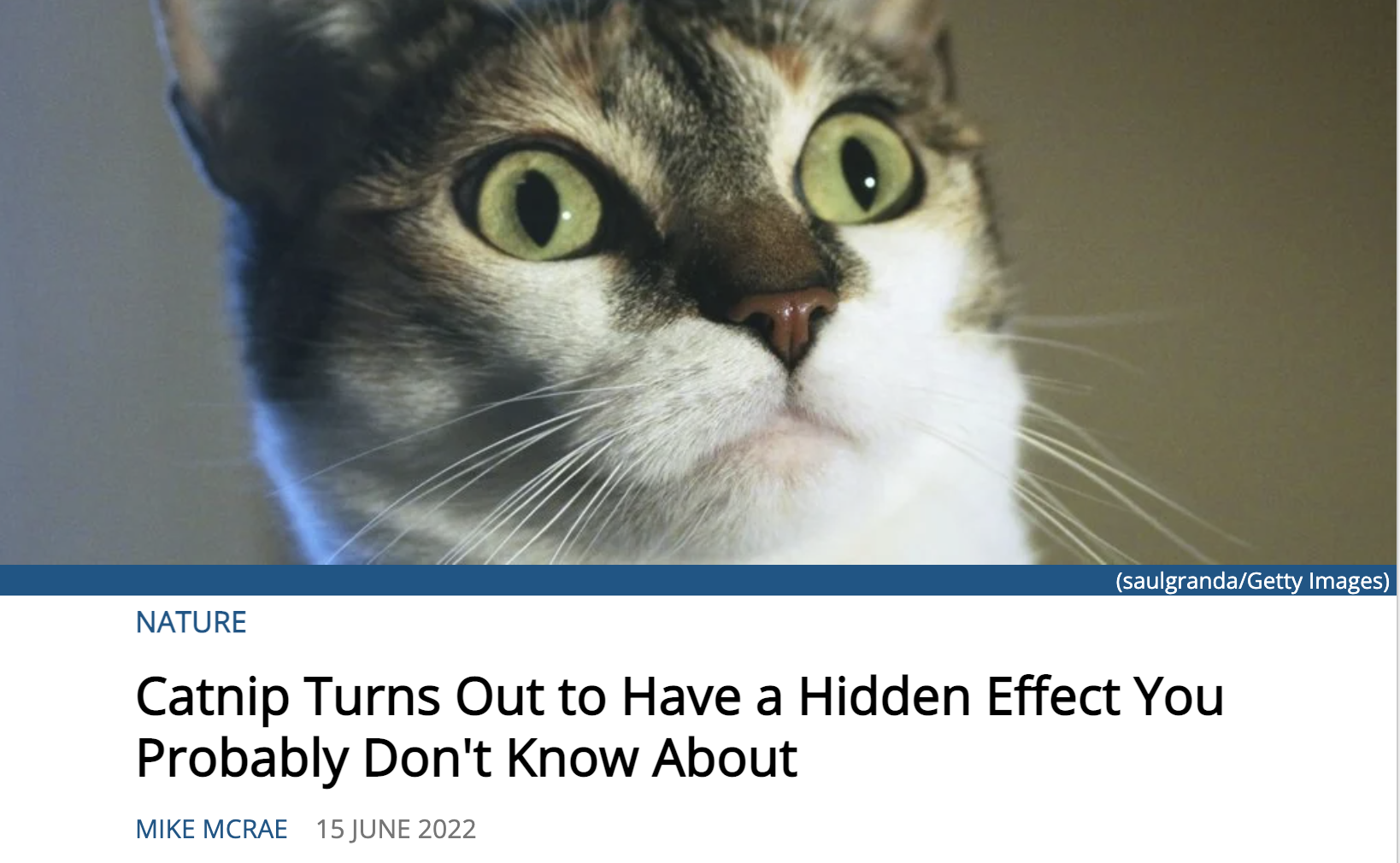 Not satisfied with merely rolling among its foliage, many kitties will tear and crumple the leaves, prompting researchers to investigate the purpose of this wanton destruction.

What appears to be an act of pure hedonism could also have a more medicinal purpose. According to a new study, the additional damage to the leaves releases significant amounts of insect-repelling compounds into the air, bathing the cat in a natural pesticide.

While N.[Nepeta] cataria is the most commonly recognized cat intoxicant, a number of plants including valerian (Valeriana officinalis) and a species of kiwifruit called silver vine (Actinidia polygama) also contain compounds that induce odd behaviors in domestic and wild cats.

Two such chemicals are nepetalactol and nepetalactone – figure-eight-shaped molecules classed as iridoids, which are produced by plants like catnip and silver vine to ward off insect attacks.

Nepetalactone also happens to titillate a set of receptors inside feline nasal cavities, triggering a cascade of responses that make a quick roll in the leaves impossible to ignore.

Previous research joined the dots, demonstrating the cat’s vigorous actions bruise the leaves of catnip and silver vine enough to release sufficient amounts of nepetalactone and nepetalactol to serve as a repellent against the mosquito, Aedes albopictus.

That species of mosquito is known to carry several pathogens, including yellow fever, Zika virus, and nematodes, so repelling it may be a palpable advantage to a cat.

Note that the cat’s olfactory receptors and behavior have evolved to make a cat crave a roll in the ‘nip. It’s similar to how the pleasure or orgasms is a cue that’s evolved to compel us to reproduce. And it explains why they roll in the stuff. Eating it may also provide some protection. At any rate, you can see the rolling effect if you put the nip on the ground, but stalks of fresh herb will do even more.

Sixteen healthy lab cats participated in the study, which involved watching their behavior as samples of intact, crumpled, and torn catnip and silver vine leaves and cocktails of iridoids in petri dishes were placed in front of their cages.

The team also conducted a range of other tests on the efficiency of various plant extracts and iridoid mixtures as a mosquito repellent, and the concentrations of volatile compounds surrounding cat-damaged leaves.

Taken altogether, it was clear that the extra damage done by ripping at the leaves really helped get the party started a lot faster.

“We found that physical damage of silver vine by cats promoted the immediate emission of total iridoids, which was 10-fold higher than from intact leaves,” says lead author Masao Miyazaki, an animal behavior researcher from Iwate University in Japan.

Not only was the total concentration higher in both plant types, the mix of iridoids was more complex in torn silver vine leaves, making for a more potent repellent at lower concentrations.

Cats who were exposed to these mixtures were also affected for a longer duration, suggesting their biology has been ‘fine-tuned’ to maximize the insect-repelling doses of silver vine.

Why do they mention only silvervine and not catnip? Did they not study the ‘nip, or did they just assume that the repellant effects of catnip would be similar to that of silvervine? At any rate, if you want to give your cat the advantage of the insecticide, which house cats probably don’t need, crush up some fresh stalks of catnip for them.

If you want another example of an animal applying naturally occurring anti-parasite chemicals, try this one, which will make you a hit when you tell the story at parties (click to read):

This first headline is paywalled if you’re not a Times subscriber (I’m not, but I had it free the other day), so if clicking on the first one doesn’t work, go to the second. 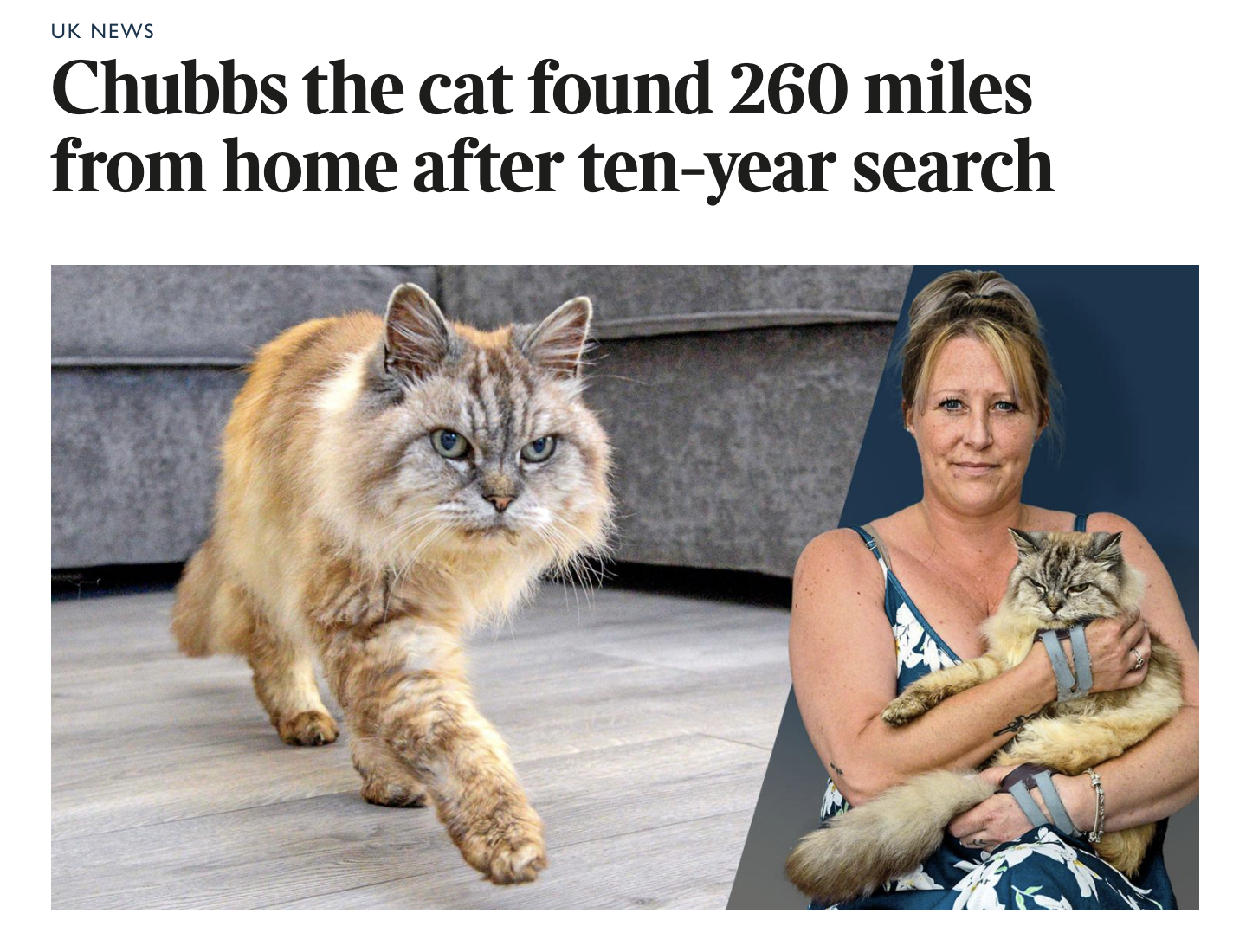 From the BBC (click to read. I love that the BBC news posts this as “news”. You’d never find this in the NYT!)

Yes, it’s another example of a cat lost for years and years before it was found. Thank Ceiling Cat for the Microchip Era, and if your cat ever goes outside, or even escapes outside, please get it microchipped.  Here’s the tale:

A cat that went missing from its home in Dorset 10 years ago has been reunited with its owner after being found 260 miles away.

Chubbs disappeared from his family home in Weymouth in 2012, leaving his owner Donna Gallacher distraught.

The tabby was found in Greater Manchester and taken to a vets where a microchip revealed his true owner.

Ms Gallacher, who searched for him for years, said she never gave up hope of finding him.

The story was originally revealed in the Dorset Echo after the cat was found in the market town of Ashton-in-Makerfield.

Hedgehog rescuer Kelly told the BBC she regularly spotted Chubbs following schoolchildren around when she dropped her daughter off at school in the mornings.

“I thought at first it was someone’s pet following them instead of turning around,” she said.

There’s a picture of Chubbs and staff in the first headline (isn’t he a handsome moggie?), and here he is from the BBC. This photo was taken in 2012 before Chubbs went missing (photo by Donna Gallacher): 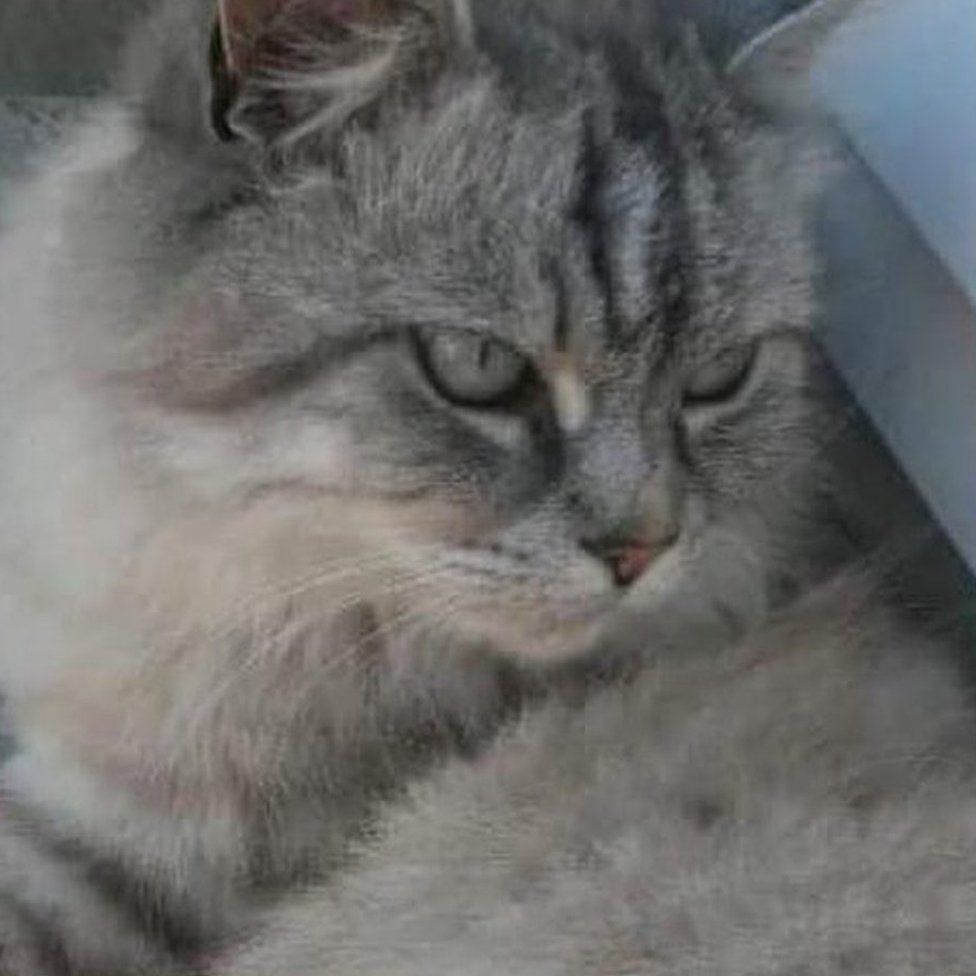 Apparently Chubbs was STOLEN, and was found flea-bitten and toothless!

[Kelly] added: “The day that I picked him up he was slowly walking across the main road in random directions, weaving between moving cars and narrowly being missed.

“I couldn’t leave him there to get run over so I picked him up from the centre of the road and took him into my car.

“He was so friendly and lovely, but extremely skinny, covered in fleas, soaking wet – it had been raining heavily the night before – and generally looking like a stray.”

The soggy moggy was taken into Rutland Vets who then emailed Ms Gallacher.

“I didn’t know anything until I got this email from the vets and when I saw Chubbs’ name my heart skipped a beat,” she said.

The 40-year-old, who believes the cat was originally stolen by someone on holiday in the coastal town, added: “The vets said Chubbs looked as though he was on his last legs – he has no teeth and is covered in mats.

Chubbs can’t walk properly now, either, and may have kidney problems. That’s so sad; what a rough life he must have had! But he’ll live out his years in comfort not:

“It broke my heart thinking I might have to say goodbye to him but he’s been getting stronger every day,” she said.

“He’s happy now and I’m going to let him live out his older years. Until then he’s going to be a very spoilt old man.”

Most importantly, she said he had not forgotten her after all this time.

“He follows me around and won’t leave me alone, he hasn’t stopped purring,” she said.

“And he remembers his name – when I call him his head comes straight up.”

Finally, here’s a video of a brave and wily cat using multiple tactics: aggression, hiding behind a chair, and climbing a post to escape the jaws of a coyote. And it did!

According to KTVU in Houston, an hour away from the town where the attack occurred, it was filmed by the owner of the portch, who tried to scare off the coyote (but only by banging on the door). However, it wasn’t his cat (see below). The article reports that coyotes are pretty common in Surfside and in Houston, and have killed pets before.

The video was recorded on a home surveillance camera in Surfside, Texas on June 9, and showed the scene unfolding between the two animals.

In the footage, the cat could be seen trying to hide and escape from the coyote. While the cat suffered many close calls, the feline was able to climb up the home’s banister to safely get away.

“You can hear me bang on the door to scare off the coyote. That’s why he ran off,” Gray said. “He was a fighter and luckily the coyote was a skittish pup.”

The 45-year-old posted the video on social media, writing “Island life… Someone almost lost a cat.”

. . . .It’s currently unclear who the cat belongs to or where the cat went to after the incident.

“This was my first up-close experience and hopefully the last,” Gray concluded.