Here’s a bit of fallout from yesterday’s decision on the participation of transgender people in swimming.

This seemed to me a sensible solution, since it’s male puberty itself that gives transgender women an athletic advantage, while basing the rules on testosterone level and period of lowered testosterone (or on nothing at all in some places) is confusing and less supportable by research.

Now, according to this article in the Times of London (click on screenshot), the FINA rules may soon be applied more widely. The article actually has appeared twice with the same link but two different headlines (the newer one includes rugby news), so I’ll put the second headline below. Click either to read, though you may get paywalled: 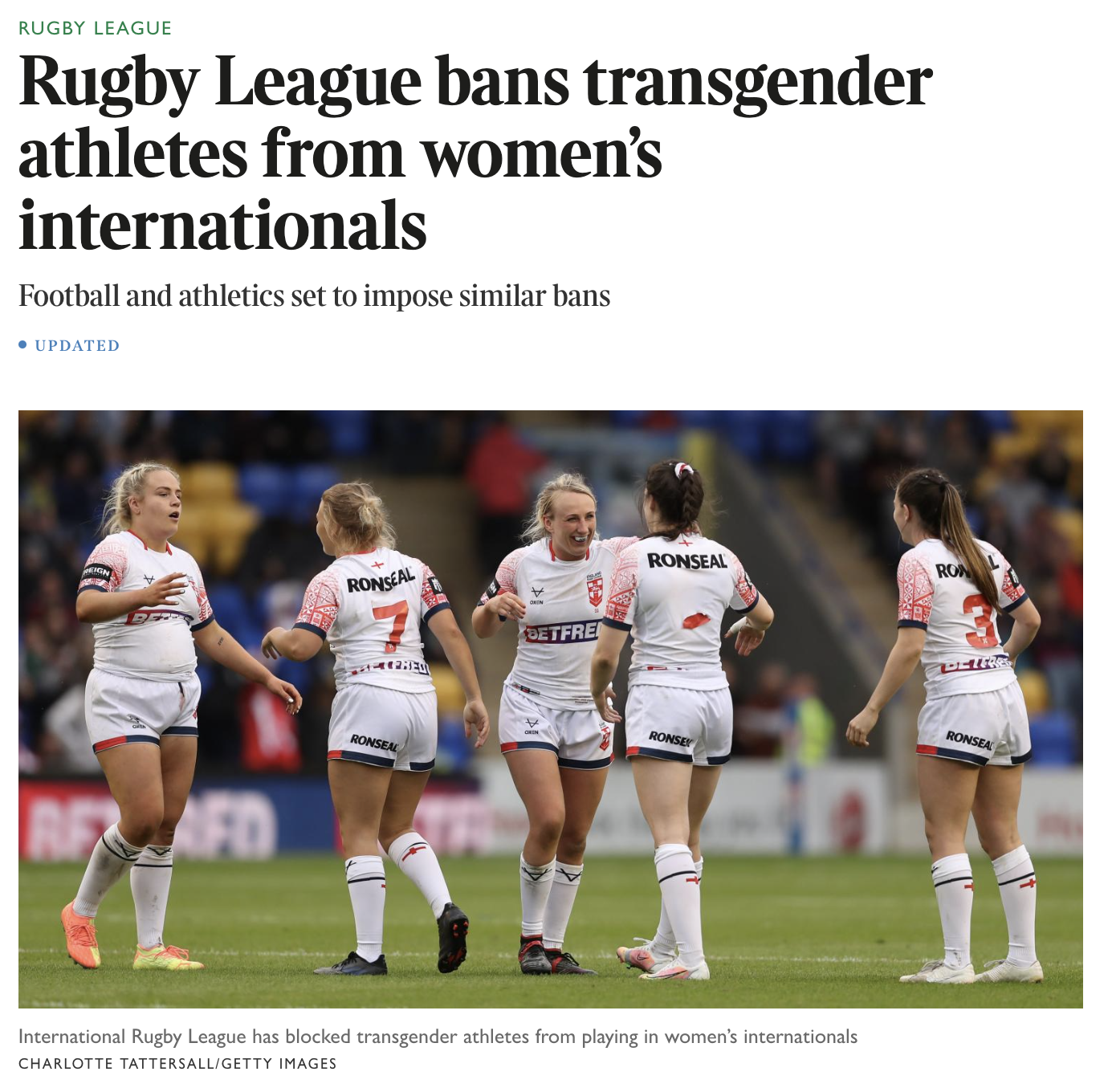 Let’s leave rugby for the end, as the first story reflects what may be a wider decision.

World Athletics is the world governing body for amateur sports, except apparently water sports. It also governs who can compete in the Olympics. Wikipedia describes its mission like this:

World Athletics is the international governing body for the sport of athletics, covering track and field, cross country running, road running, race walking, mountain running, and ultra running. Included in its charge are the standardization of rules and regulations for the sports, certification of athletic facilities, recognition and management of world records, and the organisation and sanctioning of athletics competitions, including the World Athletics Championships. The organisation’s president is Sebastian Coe of the United Kingdom, who was elected in 2015 and re-elected unopposed in 2019 for a further four years.

President Coe just issued a statement implying that his organization is likely to follow FINA in other sports, and these sports may be many. As the Times reported in the earlier story:

World Athletics is likely to follow swimming in imposing a ban on transgender athletes from elite women’s races, with its president, Lord Coe, stressing that “biology trumps gender” when it comes to fairness in competition.

Football’s world governing body, Fifa, is also considering following the international swimming federation Fina’s new policy, which states that anyone who has gone through male puberty cannot take part in female competitions regardless of whether they have transitioned to become a woman.

Fina plans to create an open category and a protected female category. Coe said athletics’ rules are being reviewed but he made it clear which side of the argument he falls on and applauded swimming for its stance.

“We see an international federation asserting its primacy in setting rules, regulations and policies that are in the best interest of its sport,” Coe said. “This is as it should be. We have always believed, and repeated constantly, that biology trumps gender and we will continue to review our regulations in line with this.

“My responsibility is to protect the integrity of women’s sport and we take that very seriously. If it means that we have to make adjustments to protocols going forward, we will. And I’ve always made it clear.

“If we ever get pushed into a corner to that point where we’re making a judgment about fairness or inclusion, I will always fall down on the side of fairness. You have to, you have to, and that’s my responsibility.”

. . . On the debate around the participation of transgender athletes specifically, Coe added: “Transgender is a societal issue, it’s not a new issue. But, in sport, it certainly is. And, as you know, in 2019, we brought into alignment our DSD and our transgender regulations. And, again, in transgender, that is something that we are also looking at.

“Biology trumps gender” is the operant phrase here, but I’m not sure how much influence Coe has on the rules concocted by his association.

Below Coe takes up the issue of whether these new sports rules reflect “transphobia” or other animus against transgender people, and he denies it, as do all of us who think the issue of sports deserves a carve-out among transgender issues.

Further, the FINA rules dictate that athletes with the “46 XY DSD” syndrome, who have a male X/Y chromosome constitution but with abnormal or ambiguous genitalia, must also compete in the men’s category. I believe Caster Semenya has this syndrome, but she was allowed to compete in the Olympics against biological women, winning several medals. If the FINA rules are adopted by World Athletics, she must compete against men.

As for football (soccer), the governing body is also contemplating adopting FINA’s rules, though I haven’t heard of any issues around transgender females competing in women’s soccer. (As always, the issue is about women’s sports: few people have any qualms about allowing transgender men to compete in men’s sports.)

Football’s world governing body, Fifa, is also considering following the international swimming federation Fina’s new policy, which states that anyone who has gone through male puberty cannot take part in female competitions regardless of whether they have transitioned to become a woman.

The FA’s [Football Association, the governing body of UK soccer] chairwoman Debbie Hewitt also said that any policy had to ensure fairness as well as inclusion. The FA is working on guidelines for grassroots football which may be different to those in elite competition.

Finally, the rugby news was added since I first read this piece two days ago.

Transgender athletes have been blocked from competing in women’s international rugby league matches, including this year’s World Cup, with football and athletics set to impose similar bans.

The International Rugby League (IRL) said it would use the end-of-year event to help develop a “transwomen inclusion policy” for the future which “takes into consideration the unique characteristics of rugby league”.

Note that there are two types of rugby: Rugby League football is a full-contact sport with 13 players on each team. Ruby union has less contact and 15 players on each team. Right now they have different rules about how transgender women can compete with biological women: Rugby union will adhere to the FINA standards, but right now rugby league uses a testosterone titer (see below).  The International Rugby League, which governs the rugby league version of the sport, may well also revert to the FINA standards.

As noted below, the rules about who can compete in women’s leagues is a confusing farrago depending on the sport. Rules often rely on testosterone titer and duration of treatment, and there is no uniform standard. As the athletic advantages of male puberty apply across nearly every sport, I see no reason not to apply a uniform standard across all sports in which males gain an athletic advantage through puberty. Based on current research, the FINA standard seems to me the best present alternative. It can and should, of course, be re-examined as future research comes in.

Here are the current standards for transgender women’s participation in various sports as given in the Times:

As far as I know, the American Civil Liberties Union hasn’t yet weighed in on the FINA swimming guidelines, but if you look at their page of assertions about transgender athletes, it’s likely they’ll raise a ruckus.

Here are the four FACTS asserted by the ACLU in large, bold type:

FACT: Including trans athletes will benefit everyone.

FACT: Trans athletes do not have an unfair advantage in sports

FACT: Trans people belong on the same teams as other students.

None of these are facts; they are all opinions, and the first and second opinions can in principle be tested.  But I’ll leave the ACLU alone for now. By dying on this hill, they’re only making themselves look bad.

33 thoughts on “Fallout from FINA’s ruling on transgender athletes: Soccer and other sports likely to follow, rugby bans transgender players from international competitions”