Further eroding the wall between church and state, the Supreme Court ruled today by a margin of 6-3 (get used to that vote!) that the state of Maine MUST allow taxpayer-funded vouchers for students who want to go to religious schools.  This means that we, the taxpayers, must surrender some of our hard-earned dosh to subsidize religious instruction. This has violated all precedent, as the articles below explain.

You can read the decision here.

Judge Roberts, who voted with the conservative majority, called the “no-religious-vouchers” law of Maine “discrimination against religion.” I can see that argument (though I disagree with it), except that the private or public schools normally funded with such vouchers do not push a religious point of view. In fact, if I had my way there would be no vouchers at all, so Roberts’s argument wouldn’t apply. You either send your kids to public schools, homeschool them, or, if you can afford it, PAY for private schools, religious or not. If you think the public schools aren’t good enough for your kid, or are too secular, pay for them to go to “better” schools. If I’m going to pay for improved education, I want it to be through higher taxes to improve PUBLIC schools.

The Supreme Court said Tuesday that Maine cannot exclude religious schools from a tuition assistance program that allows parents to use vouchers to send their children to public or private schools.

The 6-3 ruling is the latest move by the conservative court to expand religious liberty rights and bring more religion into public life, a trend bolstered by the addition of three of former President Donald Trump’s nominees.

“Maine’s ‘nonsectarian’ requirement for its otherwise generally available tuition assistance payments violates the Free Exercise Clause of the First Amendment,” Chief Justice John Roberts wrote for the majority. “Regardless of how the benefit and restriction are described, the program operates to identify and exclude otherwise eligible schools on the basis of their religious exercise.”

It is a loss for critics who say the decision will amount to a further erosion of the separation between church and state. Although only one other state, Vermont, has a similar program, the court’s ruling could inspire other states to pass similar programs.

Writing a dissent joined by Justice Elena Kagan and in part by Justice Sonia Sotomayor, Justice Stephen Breyer said the court had “never previously held what the Court holds today, namely, that a State must (not may) use state funds to pay for religious education as part of a tuition program designed to ensure the provision of free statewide public school education.”

The Freedom from Religion Foundation also has a new piece analyzing the decision, which you can read by clicking below:

From the FFRF analysis:

The court has gone contrary to the country’s foundational constitutional principles in striking down Maine’s “no aid” law, a provision meant to ensure that no citizen is forced to fund religious indoctrination at private religious schools, or any religious education that conflicts with their personal beliefs. The Supreme Court’s judicial activism and faulty reasoning will undoubtedly lead to many additional violations and litigation in other states as Christian nationalists seek to fund private Christian education with taxpayer money.

The plaintiffs want to use state money in this instance to send their children to Christian schools that provide religious instruction. One of the schools in question, Bangor Christian School, has a mission of instilling a biblical worldview that is “completely intertwined” with the curriculum and identifies the bible as its “final authority in all matters.” The First U.S. Circuit Court of Appeals concluded in its judgment two years ago that the “nonsectarian” requirement in Maine’s tuition assistance program did not exclude religious schools based on their religious status, but rather protected the state’s interest in only supporting nonreligious education.

You citizens of Maine: if you accept evolution, you’re probably giving money to parents to have their kids taught creationism.

However, the majority opinion, written by Justice John Roberts, asserts that Maine’s law impermissibly infringes on the rights of religious schools: “A State’s antiestablishment interest does not justify enactments that exclude some members of the community from an otherwise generally available public benefit because of their religious exercise.” Roberts added, “A state need not subsidize private education. But once a state decides to do so, it cannot disqualify some private schools solely because they are religious.”

This claim misconstrues the real religious freedom at stake in the case, which is the right of every taxpayer to be free from funding religious indoctrination, and the right of every student in Maine to an education free from religiously motivated discrimination. Shockingly, the Supreme Court’s opinion explicitly acknowledges that private religious schools are very different from the public school education that Maine’s program is intended to offer. Roberts notes, “private schools are different by definition because they do not have to accept all students. Public schools generally do,” and moreover, “the curriculum taught at participating private schools need not even resemble that taught in the Maine public schools.”

And look at this!

The two religious schools acting as plaintiffs in the case “candidly admit that they discriminate against homosexuals, individuals who are transgender and non-Christians,” according to Maine’s brief to the Supreme Court. But rather than observing that these differences warrant Maine’s decision to limit its funding to schools that do not indoctrinate students, the court reasons that giving money to any private school means the state must fund religious education as well.

And from Sotomayor’s strong dissent:

Get used to a 6-3 vote (Breyer will be replace by the liberal Ketanji Brown Jackson). It is the vote that will be used to tear down the wall between church and state. 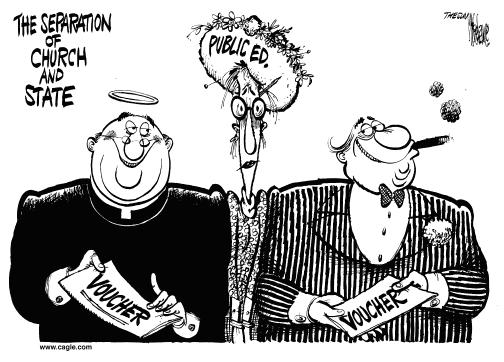 68 thoughts on “Violating the First Amendment, the Supreme Court rules that taxpayer money can be used to send kids to religious schools”