Although prices are rising in America, belief in God is falling. The good news is that this appears to be part of a consistent trend of secularization.  The bad news is that 81% of Americans still believe in God, and a bit more than half of those (42% overall) think that God hears prayers and can intervene to answer them (28% think God hears prayers but does nothing about then, while 11% think God doesn’t do either).

This is good news, and is detailed in a short article from Gallup. You can see it by clicking below, or going to the complete document, including methodology and the questions asked, at this pdf download site.

The fall from 92% in 2011 to 81% this year is pretty large.  Since there appear to be no data between the late 1960s and 2011, the slow decrease shown in the line is just an interpolation. But there’s no doubt that the long-term drop is a real drop, and goes along with a lot of data showing that Americans are, as REM sang, “losing their religion.” Perhaps some day we’ll be as areligious as northern Europe. 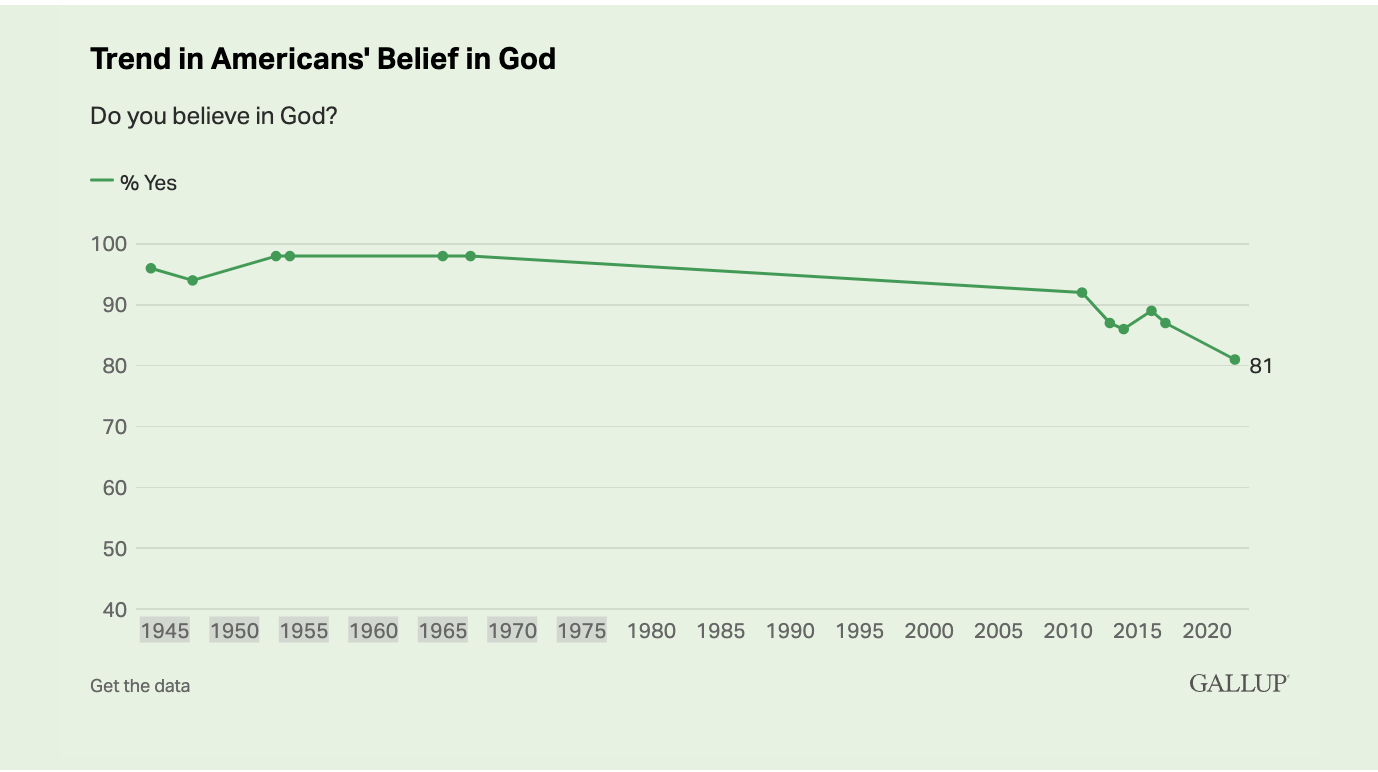 Here are the data on whether God hears/answers prayers (as we’ll see below, conservatives and liberals give very different data). But the idea that God hears prayers and intervenes leads to immense theological difficulties.  Does God refuse to answer some perfectly good prayers, like those of parents beseeching Him for the survival of their cancer-stricken child? There are many questions one could ask this 42% of Americans! Indeed, if you have the idea of God as a Man in the Sky with a Plan, one might think that a special request from someone for God to attend to their personal desires is trivial and solipsistic. So it goes.

Gallup broke the answers down by political party identification, ideological identification, frequency of going to church, and age. Here are those statistics (click to enlarge): 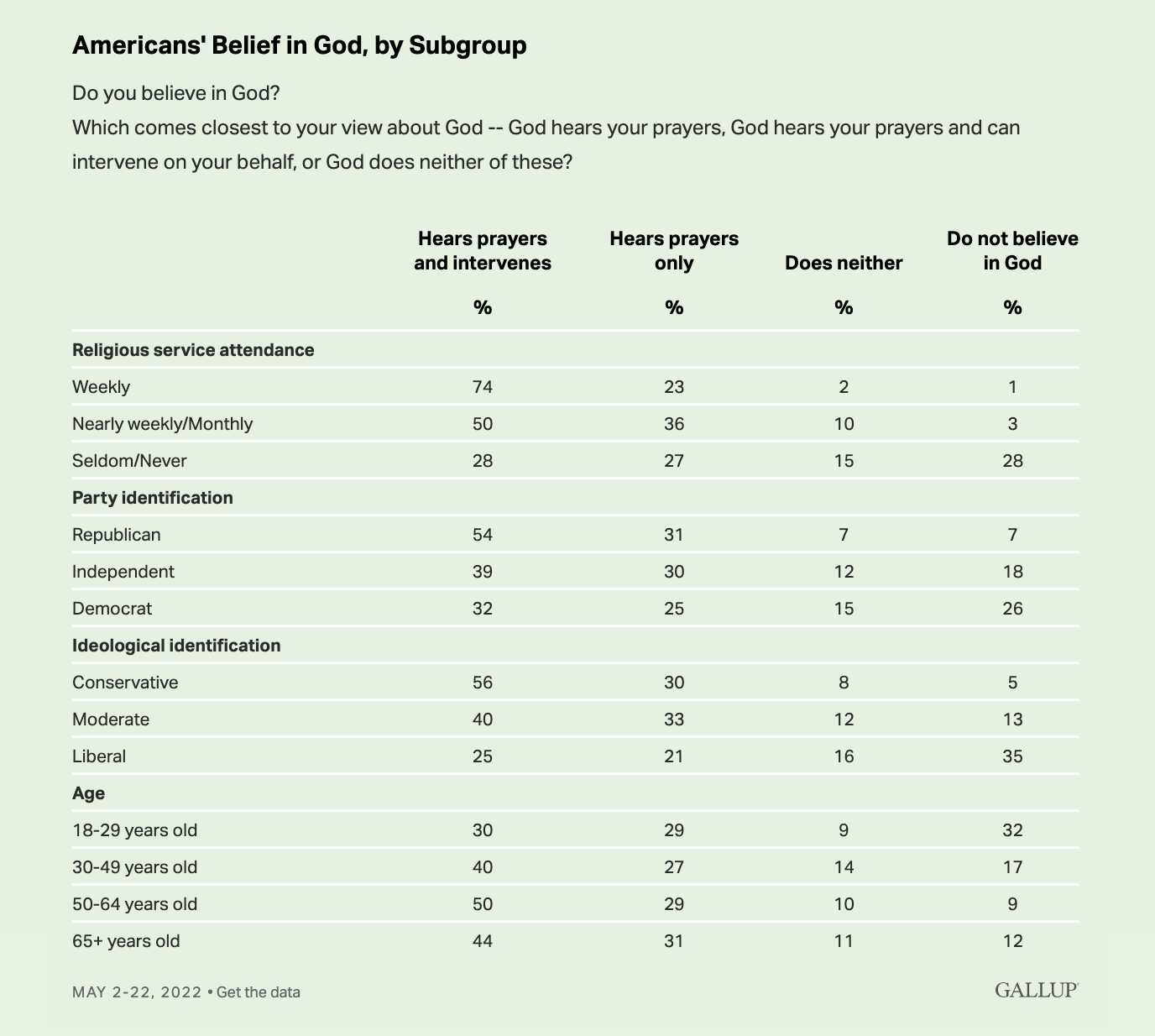 Of course those who go to church more often are more religious, with 99% of those who go to church weekly saying that they believe in God, and 74% saying that God hears prayers and intervenes.  Republicans are more religious than Democrats, with independents pretty much smack in the middle. For overall atheism, the percentage is 7% for Republicans, 26% of Democrats, and 18% for independents. The same trend holds if you divide people by “conservative, moderate, or liberal” instead of political party, except that the percentage of atheists rises to 35%. (Remember, these aren’t “nones,” some of whom are religious, but people who don’t believe in God at all. Those are atheists.

Finally, younger folk tend to believe in God less than older folk, though there’s not much difference on the prayer issue. There’s another figure for the changes in these data since 2013-2017, but you can see that for yourself.

Fewer Americans today than five years ago believe in God, and the percentage is down even more from the 1950s and 1960s when almost all Americans did. Still, the vast majority of Americans believe in God, whether that means they believe a higher power hears prayers and can intervene or not. And while belief in God has declined in recent years, Gallup has documented steeper drops in church attendance, church membership and confidence in organized religion, suggesting that the practice of religious faith may be changing more than basic faith in God.

Whatever.  The fact is that many measures of religiosity show that America is becoming more secular, and that can only be to the good.  Just for fun, if you extrapolate a fall of 98% to 81% belief in 57 years, then America will become completely atheistic in about 270 years, or in 2293!

30 thoughts on “The continuing secularization of America: belief in God falls to 81%”