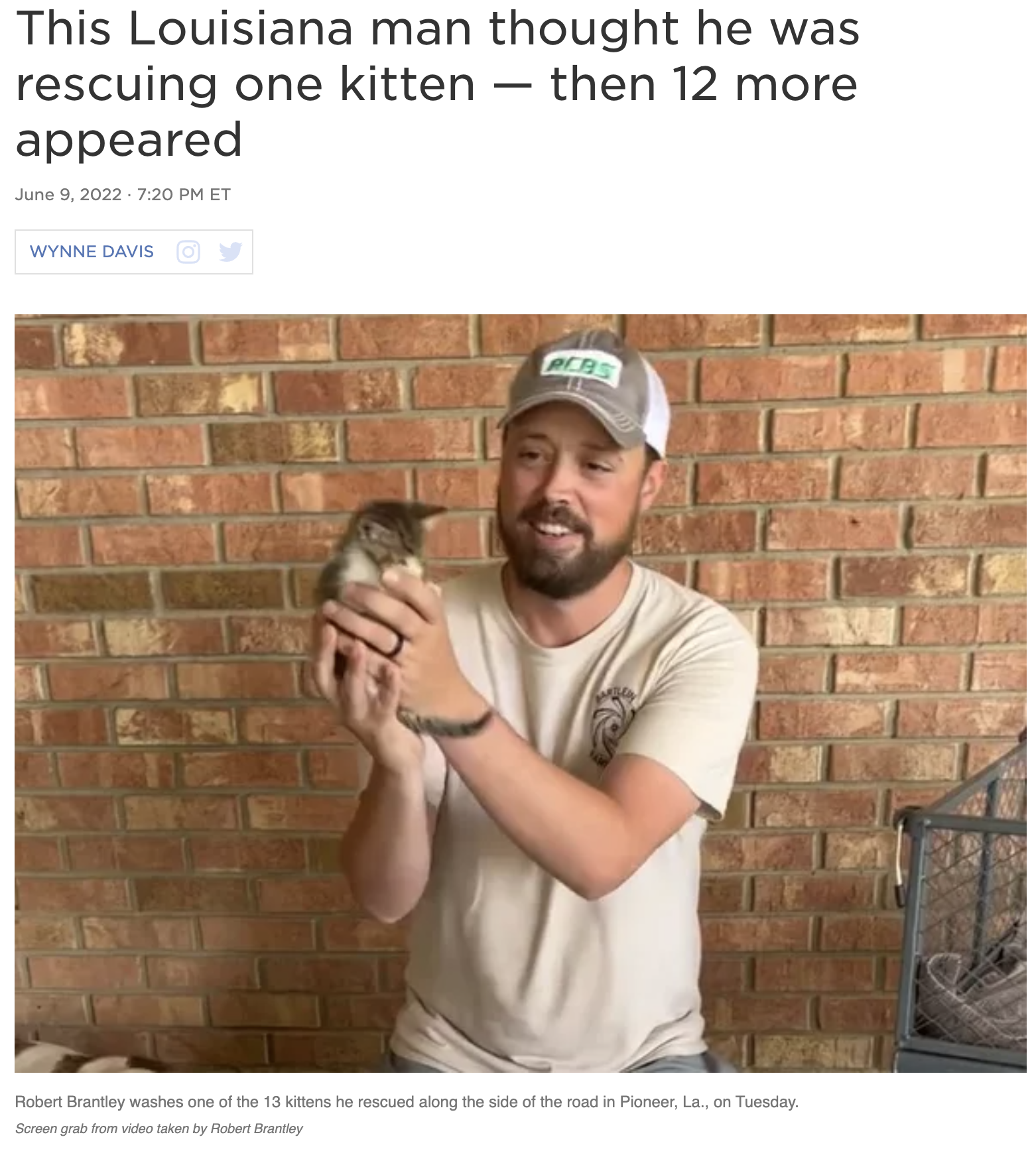 As Robert Brantley was driving down the backroads of northeast Louisiana on Tuesday, something caught his eye. The professional shooter was going about 40 miles an hour as he headed toward the shooting range, but he thought he had seen a kitten on the side of the road.

He wasn’t sure though, so he turned his car around and went back to find out. In a video that he posted to Instagram, Brantley walks toward a single white and gray tabby kitten.

Brantley picks the kitten up just as three more white kittens pop up in the grass. But it didn’t end there. In total, 12 kittens came out of the grass after the first one and ambushed the man who said he thought it was just a lone kitten.

“Oh, no, there’s a whole — oh, my gosh! I can’t take y’all. Oh, my gosh. Oh, my gosh, there’s more! We got a kitten problem,” Brantley exclaims in his initial video. “Who would do this? I thought I was saving one. Hot diggity dog.”

Here’s the video below as the litter emerges one by one from the vegetation. That’s a BIG kindle of kittens!

Make sure you put the sound on:

But all’s well that ends well:

The 37-year-old said it was a wave of emotions as he realized someone had likely dumped the kittens on the side of the road at an age when they couldn’t fend for themselves.

Then he started the notably difficult task of herding the cats into his Honda hatchback.

Brantley then headed home with his baker’s dozen of kittens. The initial video gained a lot of traction on social media, and Brantley said thousands of offers for adoption started pouring in from all around the U.S. and elsewhere in the world.

Well, I’m happy to report that most have been adopted, and all are getting health checks:

At this time, most of the litter is spoken for, with the exception of a couple of kittens that need a little extra attention, and a veterinarian is scheduled to stop by Thursday night to help out.

“We found some good people locally that want ’em, and I know that they’re all good people and they’re not doing anything bad with them,” he said. “We haven’t gave any of them away yet — they’re probably a little too young.”

Brantley has continued to share the kittens’ journey on his Instagram page, including playtime in the yard and the beginning of bath time, featuring one kitten Brantley has named Scout.

The reaction has been overwhelmingly positive, Brantley said.

“It’s mind-blowing, to be honest with you, that so many people reach out and there’s a lot of people in the world wanting to do good,” he said. “I work in the gun industry, and … some people have took that negatively. And a lot of people, which I’m very thankful of, has said, like, ‘Wow … I’m  I’m surprised you’re not such a violent person’ or ‘You still have compassion and stuff.’ “

Sound up on “playtime”:

And bafftime for Scout (sound up):

I had heard that when cats walk they leave only two sets of footprints, as they place their hindpaws precisely in the footprints of on their forepaws, and all four feet move at different times. This is called “registering”. Here’s a video of a cat doing that in sand (original video by Hanamomo):

Cats have a precise method of walking called direct registering. Their hind paws fall inside the place of their forepaws, minimizing noise and visible tracks, while ensuring more stable footing. pic.twitter.com/q2973pquzj

The phenomenon is further described at Purrfectlove:

Have you ever noticed how your cat walks? Cats all have the same walk when not hunting or jumping. They will move like this: Back right, Front right, Back left, Front left. What this means is that they walk in-sync with each side of their body. As the back foot on the right closes into the front, the paw is swapped out in the same location.

This will always leave behind what seems to appear as two paws in a perfect line. It is one of the easiest ways to tell the difference between feline and canine tracks.

Since cats move from one side to the other in perfect sync, they only leave one set of paws in the snow! The back paw and front paw are elevated on one side, soon as the back paw touches down, it is going in the exact same spot as the front paw was.

Here are catprints in the snow: one line of footprings, slightly offset: 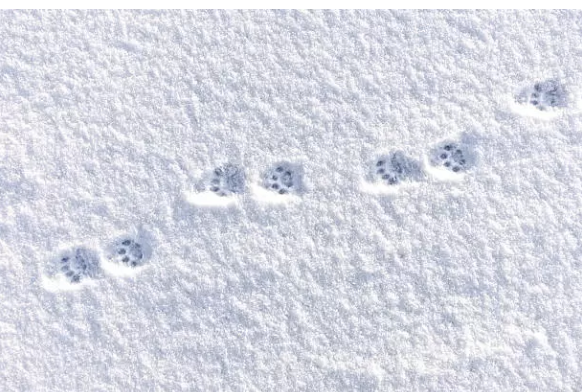 This video shows it, too:

According to the article, canids like wolves leave tracks from all four paws. So what’s up with cats? I found two suggestions on the Internet. Both make sense to me, and of course if this is an evolutionary phenomenon, which it likely is, selection could have favored the behavior on both counts.

a.) “More importantly it’s best for their hind legs to step on the same place their front legs stepped on because they can’t really see where their hind legs step on otherwise. Imagine a cat walking in the attic and their rear legs keep missing the beams.” (from reddit)

b.) Another explanation from the same page: “They look for a path with minimal sticks, leaves, etc to minimize sound and their back paws follow suit. Pretty important feature for a wild cat that depends on stalking.” This also seems plausible. (That would also make sense if you’re being stalked by a predator, though cats are usually apex predators.)

The camel and the giraffe are the only other animals that move in this [cat] way. Other four-legged animals move the left front leg at the same time as the right hind leg, and their right front leg with the left hind leg.

Don’t ask me why; I just work here.

Finally, what do you think of this video of Susan the cat? Is she REALLY faking an injury? If so, they’re smarter than I thought they were.

9 thoughts on “Caturday felid trifecta: Man thinks he’s rescuing one kitten, but saves 13; cat walks in its own footprints; drama queen cat fakes injury to get inside”