Is the NYT really starting to publish more and more material that could be considered anti-woke? It seems so.

I submit for your approval this op-ed by Pamela Paul, named as an opinion columnist just this year. But she has a long history at the paper:

Pamela Paul became an Opinion columnist for The New York Times in 2022. She was previously the editor of The New York Times Book Review for nine years, where she oversaw book coverage and hosted the Book Review podcast. She is the author of eight books: “100 Things We’ve Lost to the Internet” (named a best book of 2021 by The Chicago Tribune), “My Life With Bob,” “How to Raise a Reader,” “By the Book,” “Parenting, Inc.,” “Pornified” (a best book of 2005 by The San Francisco Chronicle), “The Starter Marriage and the Future of Matrimony” (a best book of 2002 by The Washington Post) and “Rectangle Time,” a book for children.

Now, on to the fracas that Paul considers. She describes the usual Woke attempt to cancel a book on ideological grounds before it’s even out or has been read, and then recommends that you read the book and decide for yourself. It also damns the culture that promotes attempts to “deplatform” books before they reach the public. That in itself is anti-woke, for although you may not like the book, Paul recommends that you read it, which means thinking for yourself (not a trait associated with wokeness). Buying it also slightly enriches the author via royalties. 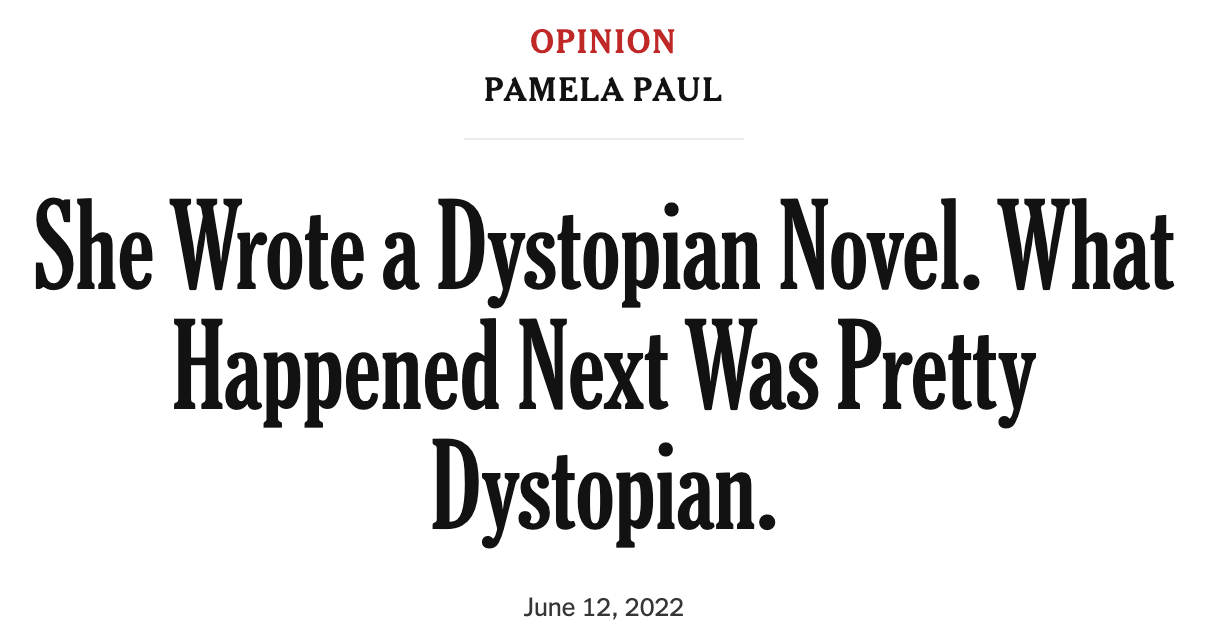 The book at hand is The Men, by Sandra Newman, which you can order by clicking on the screenshot at the bottom. It comes out just this week, and already the number of stars it’s gotten reflects I think, the attempt to “cancel” it, i.e., persuade people not to buy it. Did these people read the book? 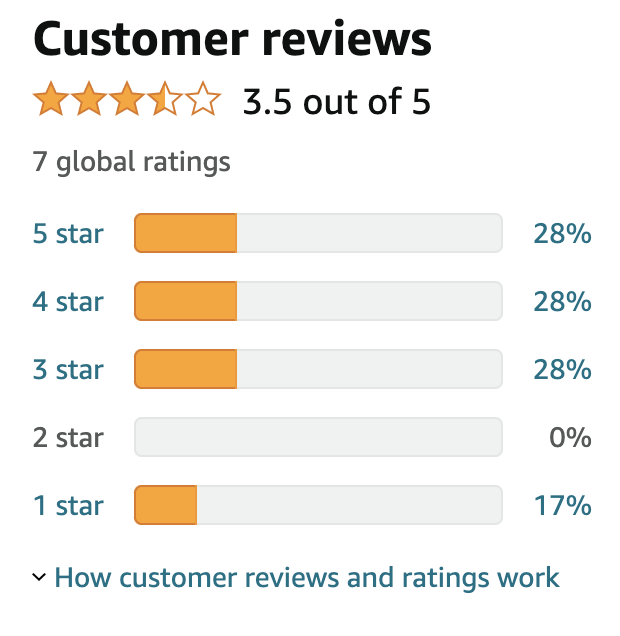 Imagine a world in which all the men disappear from the planet in a single moment: Planes they were piloting are left unmanned (literally), their female passengers abandoned in midair; men in bed with their girlfriends mysteriously vanish; boys in the playground dematerialize before their mothers’ eyes. The girls and women left behind are given no apparent reason for the sudden absence of half the world’s population.

The result of publishing it:

Now imagine another world — one in which an author proudly announces her forthcoming novel only to be attacked online for its fantastical premise. Months before the book comes out, it is described on Goodreads as a “transphobic, racist, ableist, misogynist nightmare of a book.” On Twitter, people who have yet to read the novel declare that it’s their responsibility to “deplatform” it. When one of the author’s friends, herself a writer, defends the book, she is similarly attacked, and a prominent literary organization withdraws her nomination for a prize for her own book.

Only one of these nightmare scenarios is real.

The first describes the premise of a novel that comes out this week: “The Men” by Sandra Newman. The second is what actually happened when the premise of Newman’s book was revealed.

I was in fact surprised to learn why this book was so viciously attacked, especially because it involves the disappearance of men—the lowest group on the wokeish totem pole. But it’s not that idea that caused the trouble: it’s the idea that there is a real sex binary that allows men to disappear!

And Paul, to her immense credit, defends the book and the author’s right to imagine a world in which there is a sex binary!:

For all the outlandishness of its conceits, science fiction can allow writers and readers access to deeper truths about very real aspects of society, politics and power in creative ways. But apparently Newman got too creative — or too real — for some. That a fictional world would assert the salience of biological sex, however fanciful the context, was enough to upset a vocal number of transgender activists online. They would argue that “men” is a cultural category to which anyone can choose to belong, as opposed to “maleness,” which is defined by genetics and biology.

In this case, we can set aside contentious questions around gender identity and transgender politics. Even if you don’t believe the sex binary is as fundamental to human beings as it is to all other mammals, a fiction writer ought to be free to imagine her own universe, whether as utopian ideal, dystopian horror or some complicated vision in between.

Should the reader dare enter the fictional universe of “The Men,” one thing becomes immediately clear: This is in no way a transphobic novel. It neither denies the existence of transgender people, who are woven into the narrative in several places, nor maligns them. The world Newman creates is as scrupulously diverse as a Marvel franchise movie, populated by gay, lesbian and bisexual characters as well as by straight ones of various ethnicities.

In this fictional world, where the presence of a Y-chromosome dictates who disappears, a strictly biological definition of “man” is viewed as a moral wrong. The main characters are horrified by the fate of the transgender women who get swept up (“unjustly condemned”) and sympathetic to the plight of the transgender men who remain (one character is “paralyzed by the idea that transgender people were still here”).

Note that the book is woke in the sense that a transgender woman is regarded by The Transphobic Force—that which makes “men” disappear—as a biological man. That’s right in with trans-activist philosophy. But that still didn’t appease The Offended, because the Force saw the woman as a biological man.

I can’t help but reproduce a lot of Paul’s prose, as it’s so deliciously rare in the NYT to read stuff like this:

What a sour irony that a dystopian fantasy brought a dark reality one step closer. In this frightful new world, books are maligned in hasty tweets, without even having been read, because of perceived thought crimes on the part of the author. Small but determined interest groups can gather gale force online and unleash scurrilous attacks on ideas they disapprove of or fear, and condemn as too dangerous even to explore.

“I wanted to create a parable of exclusion,” Newman, who describes herself as nonbinary, said in a phone interview. “It’s a book about ‘othering,’ the human tendency to divide people into categories or groups and to think of our group as the real people and other groups as threats to the real people.”

Newman said she tends to favor fiction that explores difficult ideas in bold ways: “People shouldn’t always write nice books.” Where better than literature to examine ideas that may unsettle or challenge?

Most people don’t want to live in a world in which books are vilified without being read and their authors attacked ad hominem for the temerity of having written them.

There’s an answer to attacks like these: Read the book.

YES! READ THE DAMN BOOK! Perhaps under the new leadership at the paper it really is getting saner. The first paragraph above, which damns a Cancel Culture that tries to suppress ideas that aren’t ideologically correct, would have been unthinkable in the NYT two years ago.

If I met Paul I’d give her a big hug of appreciation, but that might be considered harassment. 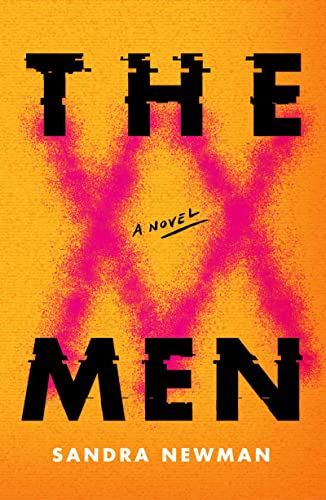 18 thoughts on “Hallelujah! Yet another anti-woke op-ed from the NYT, damning the Cancel Culture”