Henry the Cat lives in Cambridge, UK and has a forever home, but he also has a second home—in a hospital.  Read the BBC article by clicking below:

The sad thing about this is that Henry isn’t allowed inside the hospital, and so must cheer patients from the outside. (Sometimes he slips in.)

A fluffy ginger cat has gained a following of more than 4,500 on Facebook after making a hospital his second home over the past five years.

Henry has become a familiar sight to patients and staff at Addenbrooke’s Hospital, in Cambridge.

Patients said they had been soothed by his presence and staff told of being “calmed” by his cuddles after shifts.

The hospital said Henry was a “character” but urged people not to tempt him inside.

Pictures of the photogenic feline spawned a Facebook page, which sets out to ” keep up morale of all at Addenbrooke’s”. 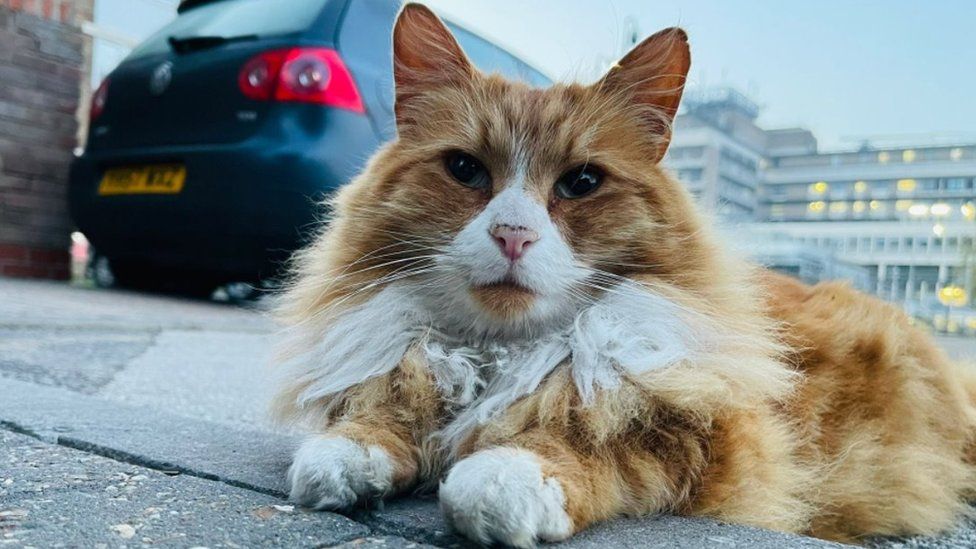 Two of Jo Stranix’s sisters met Henry when they came to visit their father, who has been in Addenbrooke’s for several months.

They had not been able to see him due to Covid-19 visitor restrictions.

“We weren’t sure if this was going to be the last time they would see him alive,” she said.

The visit had been distressing but Henry was there when they left.

“They told me ‘in that moment he made us all smile’ and I was so thankful to that cat I’d never met for being there to comfort my sisters in some small way when I couldn’t.”

But it’s the patients who need to see Henry. Is it a matter of sanitation or immuncompromised patients? Other hospitals allow animals in to cheer the patients, and even sometimes horses can visit! LET THE CAT IN!

Here’s Henry who has snuck into the wards. He desperately wants in that place! 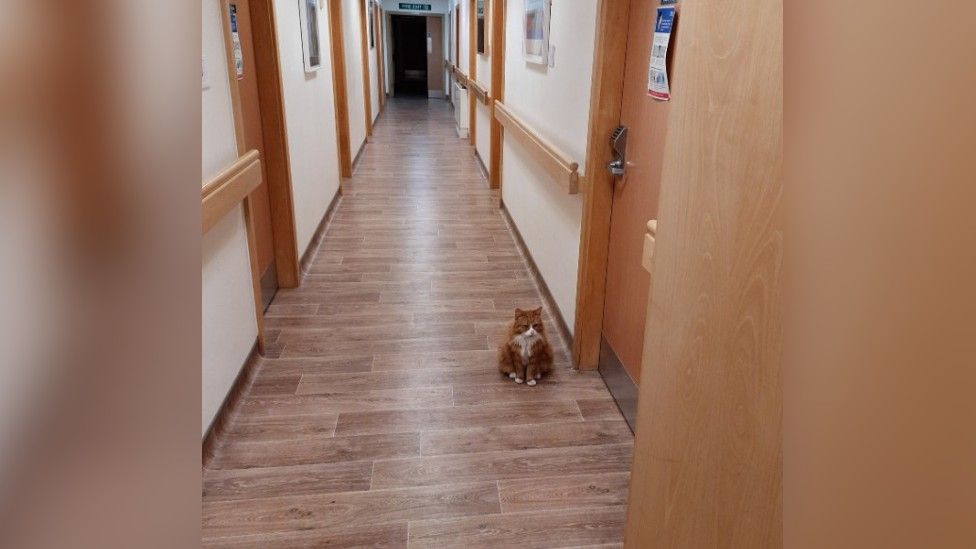 Henry’s owners, who wished to remain anonymous, said he had a loving home nearby.

They became aware of his “exploring” via social media.

“I would try to bring him home, but that never lasted more than a couple of days,” the owner said.

“It’s so nice that he’s making so many people happy – if he helps just one person [then] that’s more than many cats do.”

The article says that although they allow guide dogs and therapy animals, Henry is forbidden because of “infection control.” Hmmm. . .    More:

Aleks, a member of the hospital security team, has come across Henry many times as they both patrol the site.

“Only animals that support our patients are allowed inside the hospital – they have to have a harness and fluorescent strips,” he said.

“But Henry does a great job just putting a smile on a grumpy person in the morning, or brings out a smile from a teenager in a wheelchair.”

He said he had occasionally been called on to evict Henry from inside the buildings and added: “There would be people who are not happy that a cat is browsing around the hospital, but 99% of people love him.”

Henry also inspired the hospital’s recruitment administrator, Thalia Barnes, to paint a portrait of him for an art exhibition at Addenbrooke’s, called The Best of Us.

“He has been a great sense of therapy and companionship to all those who are graced by his presence,” she said. 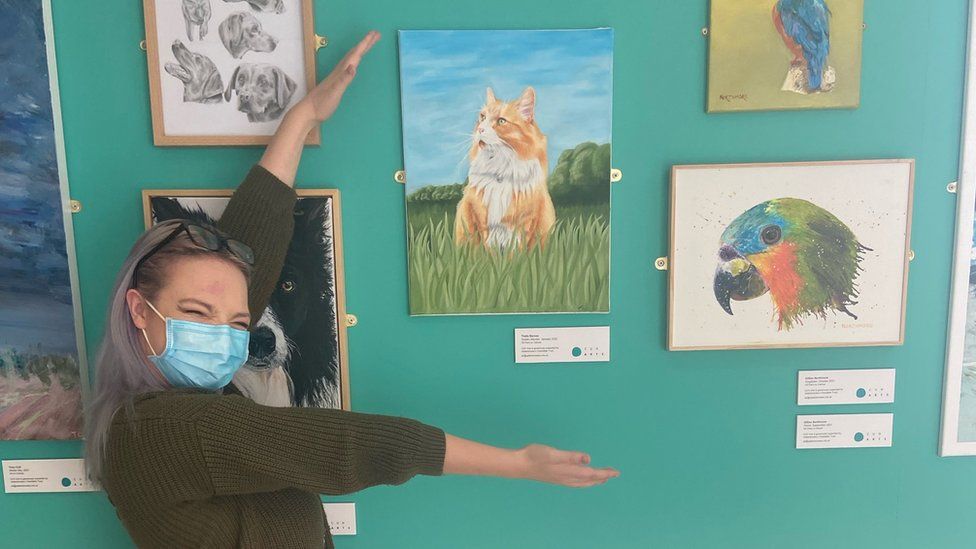 I’m sure there’s a way they could let him in to see at least some patients.

Here’s a video from DodoLand, where everything is wonderful. A German man decided to adopt a stray kitten (he named it Mogli) and took her on a long trip (the story is here, with excerpts below).

An excerpt (the staff is 32-year-old Martin Klauka of Rosenheim, Germany):

In July 2017, Klauka quit his job and hit the road in late August for a road trip of epic proportions. With Mogli by his side, he drove along the Mediterranean Sea to Iran and then into the United Arab Emirates, crossing 10 countries on his way, and reaching Dubai in December.

On the road, Klauka and Mogli quickly settled into a routine. While traveling, Mogli stays safely tucked away in Klauka’s bag on the front of his bike, occasionally sticking her head out to watch the passing scenery, or meowing in protest if Klauka exchanges smooth pavement for a bumpy dirt road. 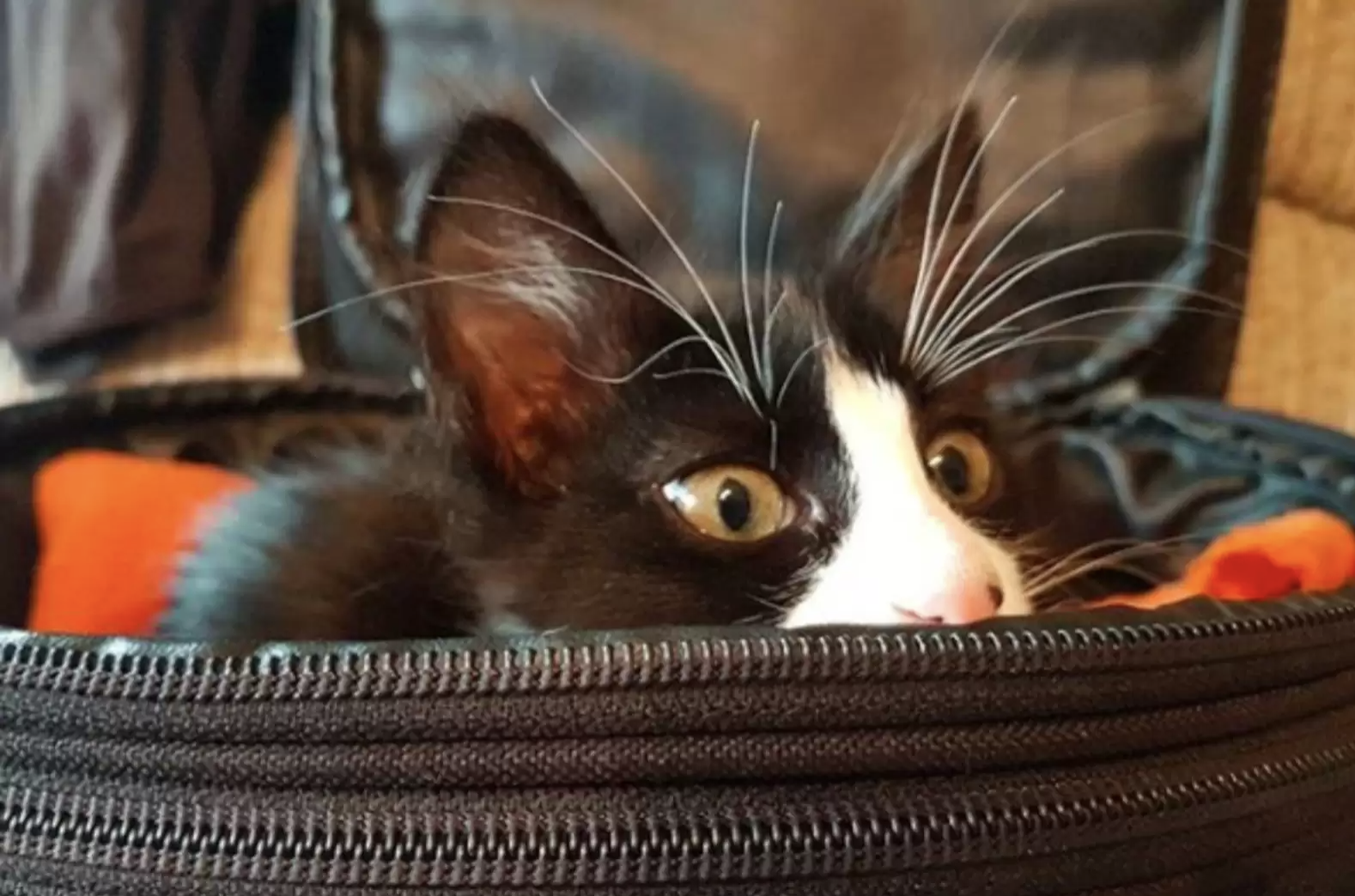 In busy public places, Mogli sits on Klauka’s shoulder, observing new cities, restaurants and shops from her elevated perch, and when they reach their campsite base, Mogli gets to roam the grounds freely, exploring as she pleases. “This is obviously what she likes the most,” Klauka adds, “and after checking back on me a few times to make sure we’re actually staying, she goes off exploring for hours, sometimes even a whole day.” 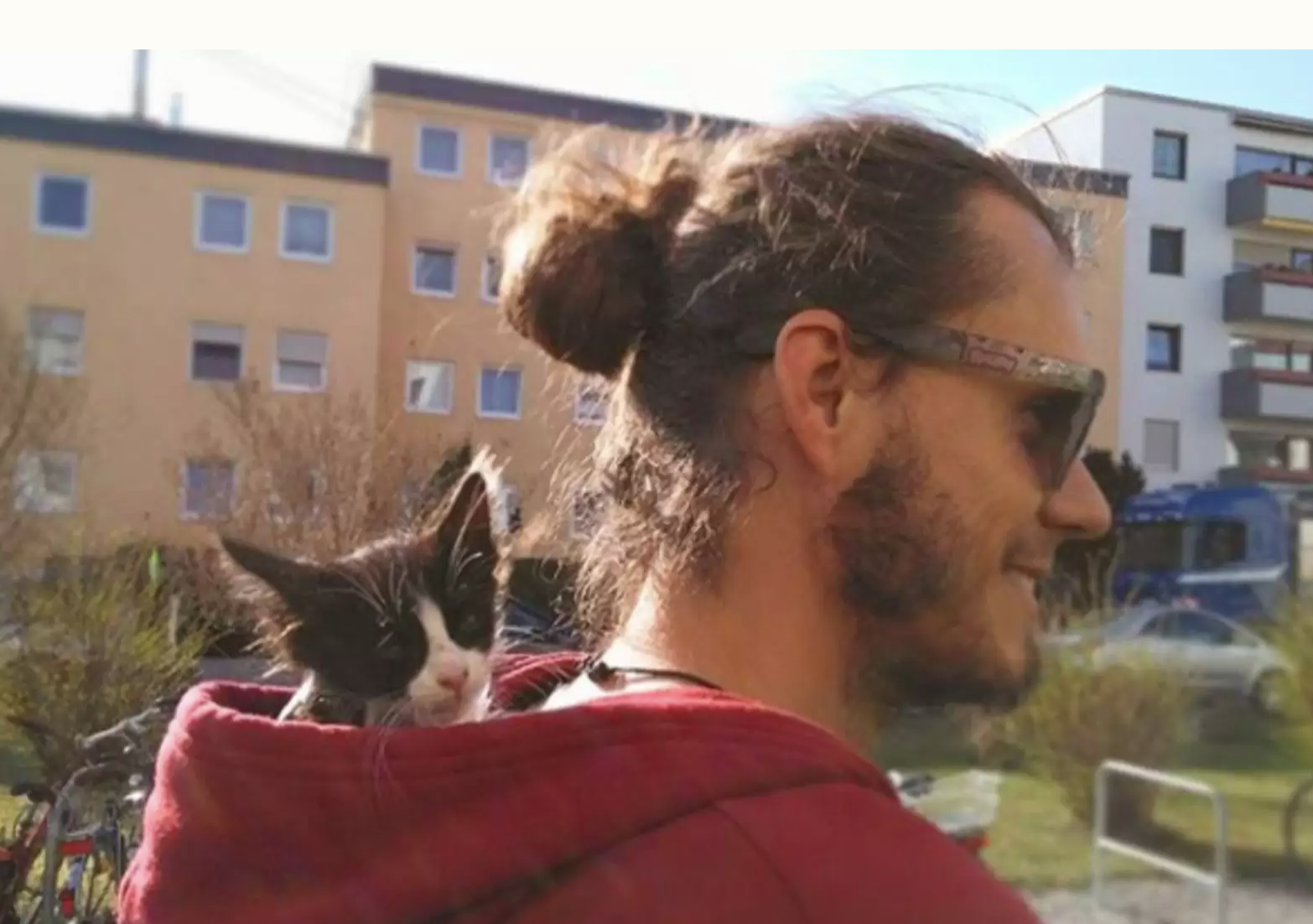 Whenever they arrive at a new campsite, Mogli goes through a special ritual of checking for dangers, such as cars and dogs, and securing a safe spot, Klauka noted. The little cat’s keen observational skills have come in handy for her owner, especially when Klauka loses sight of the tent, and Mogli is able to lead him back to their homebase. 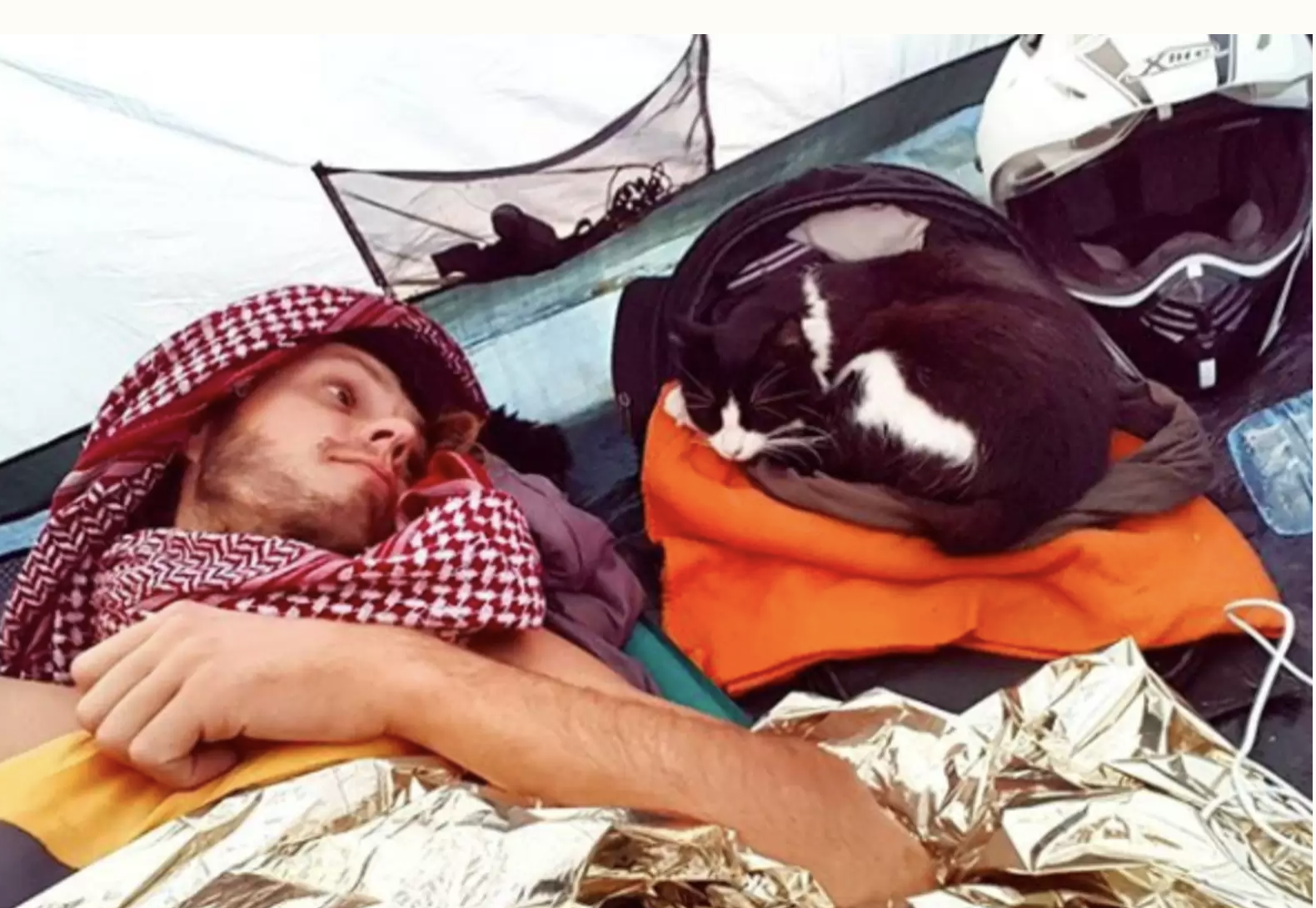 But despite the countless sacrifices Klauka has made for his best friend, it has been worth it.

“I’m happy with where I am in my life and happy to have taken her,” Klauka added, “happy to have gotten through all of this.”

Now that the first leg of their trip is complete, Klauka is working in Dubai, with plans to press on through Pakistan and India this summer. While he and Mogli are taking a much-needed break at the moment, there will surely be many more adventures to come.

Here’s part of of a BBC collection of their their best comedy moments. Their caption:

In 1970, the Goodies unleashed their legendary blend of surreal storylines, strikingly topical satire, slapstick and general lunacy on an unsuspecting viewing public. Capturing the irreverent and rebellious flavour of the decade, this phenomenally popular, award-winning series spread its mischief over twelve years making household names of creators, writers and performers Bill Oddie, Graeme Garden and Tim Brooke-Taylor. This set contains all the episodes that the terrific trio made for the BBC from a giant white fluffy kitten called Twinkle to a slippery climb up a giant beanstalk, from the ancient Lancastrian art of Ecky Thump to fighting a ban on fun instigated by an all-too-real puppet government, this is television comedy at its undeniable best!

Be sure to watch till the end.