Welcome to Friday, June 10, 2022: National Iced Tea Day (also called “the table wine of the South,” but only when highly sweetened). It’s also World Art Nouveau Day , one of my favorite periods of art. Here’s an example of Art Nouveau furniture from Paris’s Musée d’Orsay, which has a great collection of rooms and pieces from that era.  A lovely bed:

Stuff that happened on June 10 includes this:

Oxford won the 4.2-mile race easily, and the men’s record is 85 wins for Cambridge and 81 for Oxford 81, with one dead heat, In the woman’s race, Cambridge have won the race 45 times and Oxford 30 times. The only time the race wasn’t run was during the wars and in 2020 during the pandemic.

Here’s the famous 2003 race; Oxford won by only about a foot!

These were the the largest silica sinter deposits on earth and were a huge tourist attraction. Sadly, no color photos could exist, and we have just drawings. Part of the Pink Terraces still exist underwater. Here’s what the White Terrace looked like: 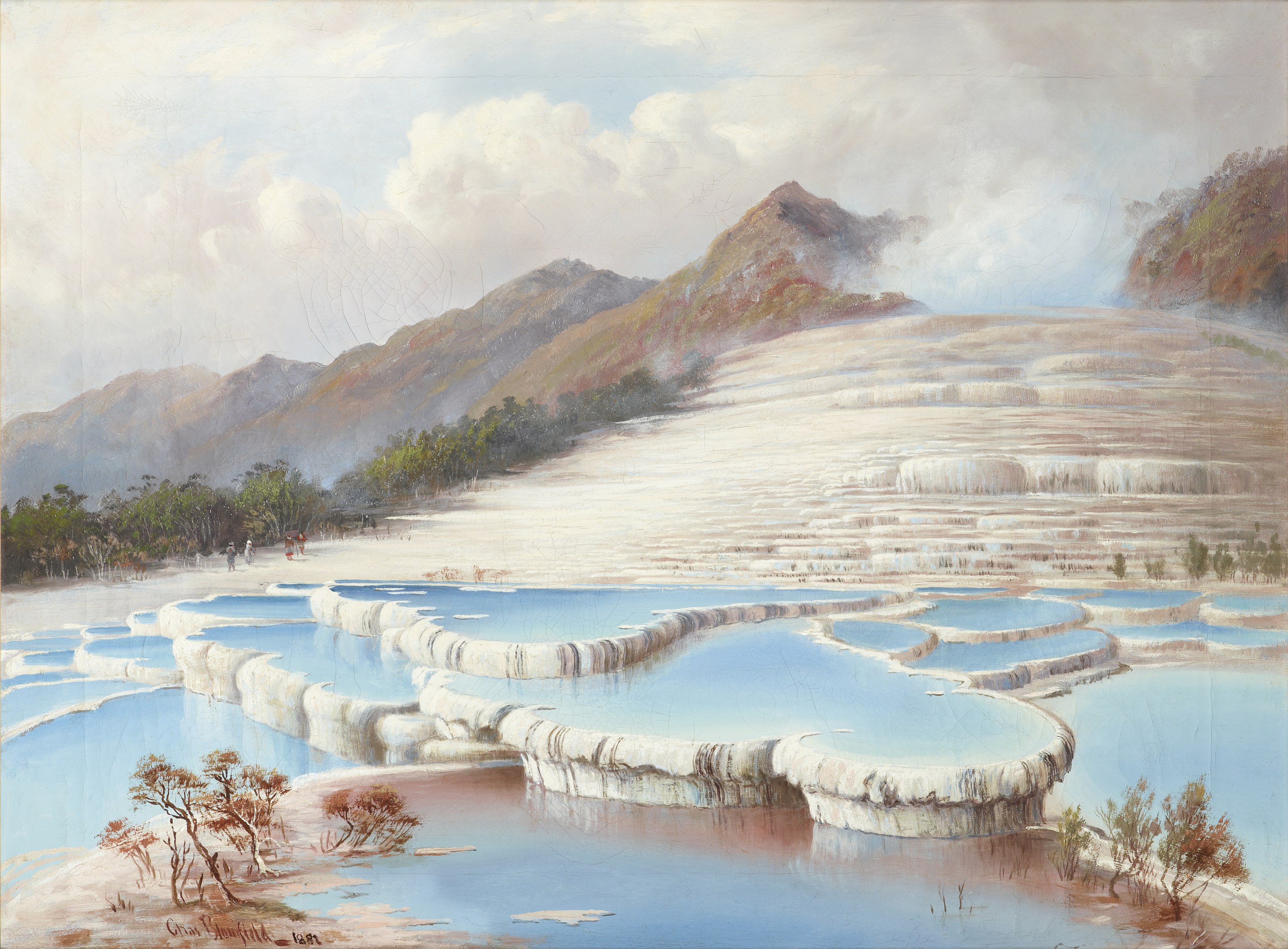 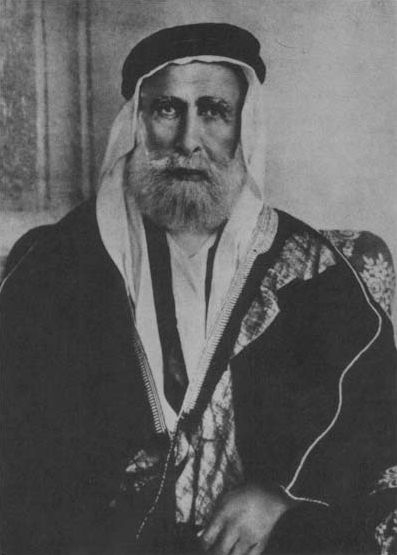 His youth was due to an absence of older players who were in the military during the war. Nuxhall pitched 2/3 of an inning, went back to the minors,and then returned to the Reds to have a good career as a pitcher. Here he is at 15: 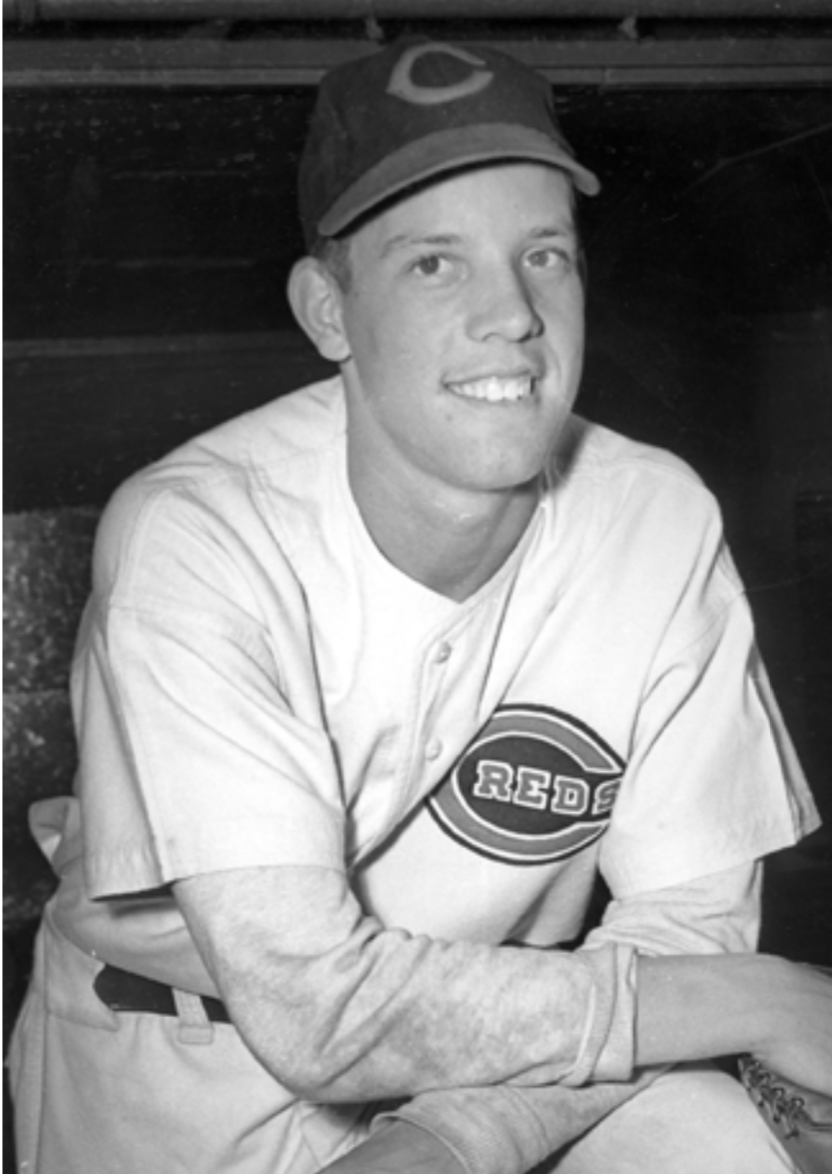 Lyndon Johnson was largely responsible for getting this bill pushed through (he saw it as the legacy of his predecessor JFK). If you want the whole story, you must read Robert Caro’s magisterial volume The Passage of Power, the fourth in his fantastic biography of LBJ. Click to order it, but read all four volumes (one of the greatest biographies ever written), and hope that Caro lives to produce the fifth. 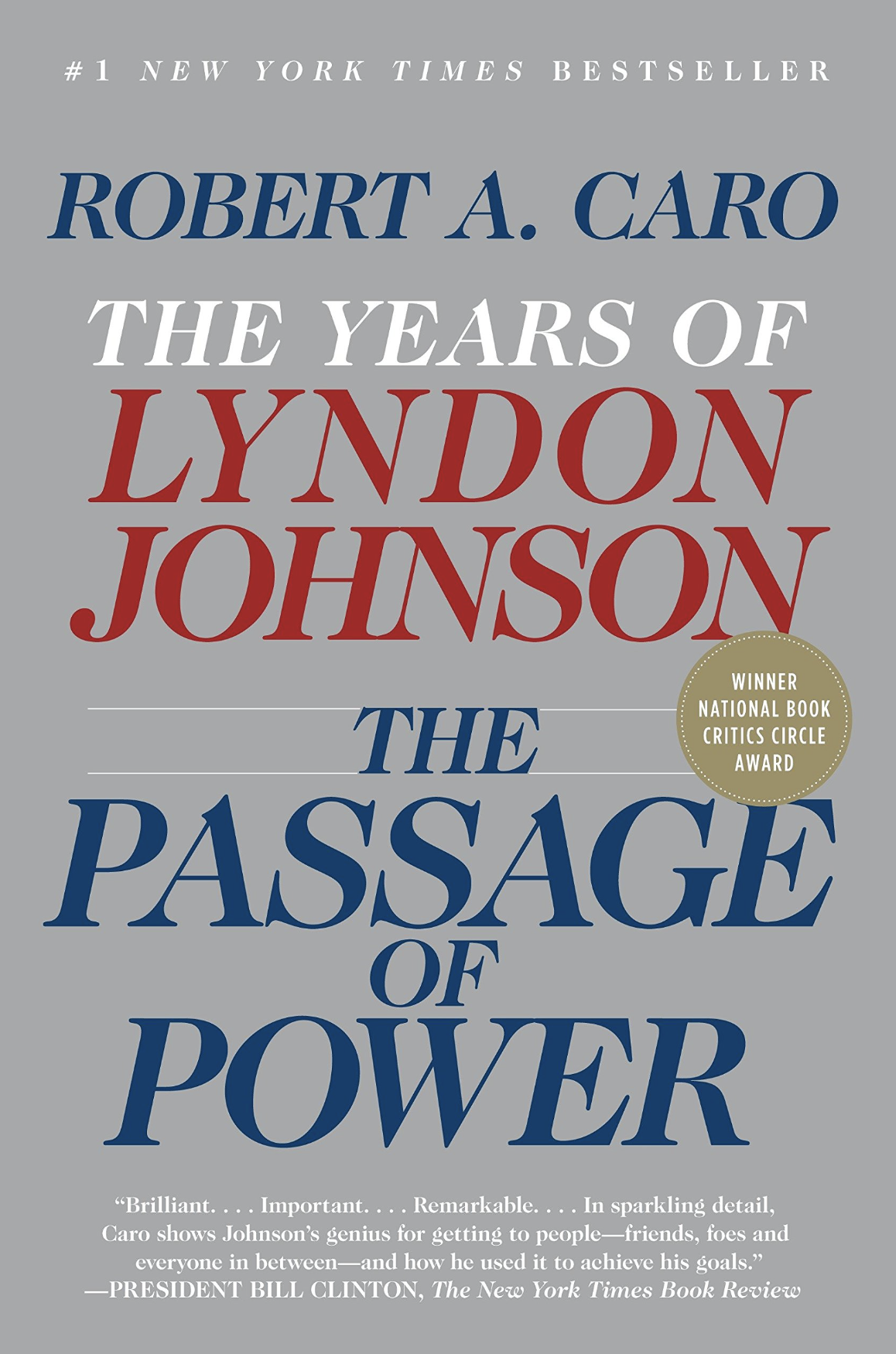 By the time Dugard reappeared 18 years later, she had had two children, aged 11 and 15, by her abductor. Both the man and woman who kidnapped her are serving essentially a life sentence, and won’t be available for parole until 2034. The law missed many opportunities to find her. Here’s a 13-minute video describing the case:

*Despite my good intentions, I was too tired to watch the January 6 hearings last night, but it sounds as if it’s orchestrated to blame Trump, which is probably true. As the NYT reported,

The House Select Committee to Investigate the Jan. 6 Attack on the United States Capitol opened a landmark set of hearings on Thursday by showing video of aide after aide to former President Donald J. Trump testifying that his claims of a stolen election were false, as the panel laid out in meticulous detail the extent of the former president’s efforts to keep himself in office.

Over about two hours, the panel offered new information about what it characterized as an attempted coup orchestrated by Mr. Trump that culminated in the deadly assault on the Capitol. The panel’s leaders revealed that investigators heard testimony that Mr. Trump endorsed the hanging of his own vice president as a mob of his supporters descended on Congress. They also said they had evidence that members of Mr. Trump’s cabinet discussed invoking the 25th Amendment to remove him from office.

The session kicked off an ambitious effort by the nine-member committee, which was formed after Republicans blocked the creation of a nonpartisan commission, to lay out the full story of a remarkable assault on U.S. democracy, orchestrated by a sitting president, that led to a deadly riot, an impeachment and a crisis of confidence in the political system.

“Donald Trump was at the center of this conspiracy,” said Representative Bennie Thompson, Democrat of Mississippi and the chairman of the committee. “And ultimately, Donald Trump, the president of the United States, spurred a mob of domestic enemies of the Constitution to march down the Capitol and subvert American democracy.”

Victims of the assault on the Capitol, including police officers and their wives, testified, and, of course, the Republicans (save two on the committee) are writing it off as “illegitimate” and a “sham”, raising diversions like “why aren’t they holding a hearing on inflation?”

Members of the panel promised to reveal evidence in the days to come that would fundamentally change the public’s understanding of the Jan. 6 attack and bring into clearer focus exactly who is to blame.

“It’ll change history,” predicted Representative Adam Kinzinger of Illinois, the other Republican on the committee.

Mr. Thompson said the next session, scheduled for Monday, would detail how Mr. Trump “lit the fuse” for the riot with his lie of a stolen election.

*I’m writing this late Thursday afternoon, so I haven’t yet seen the Congressional hearings on the January 6 insurrection that begin tonight. But David Brooks at the NYT isn’t enthusiastic, as he writes in his column, “The Jan. 6 committee has already blown it.” The goal of the hearings, avers Brooks, is to both blame Trump and damn the Republican Party for being behind it all. His comment:

No offense, but these goals are pathetic.

Using the events of Jan. 6 as campaign fodder is small-minded and likely to be ineffective. If you think you can find the magic moment that will finally discredit Donald Trump in the eyes of the electorate, you haven’t been paying attention over the last six years. Sorry, boomers, but this is not the Watergate scandal in which we need an investigation to find out who said what to whom in the Oval Office. The horrors of Jan. 6 were out in public. The shocking truth of it was what we all saw that day and what we’ve learned about the raw violence since.

Here are the problems this imaginary committee has to solve:

The core problem is that there are millions of Americans who have three convictions: that the election was stolen, that violence is justified in order to rectify it and that the rules and norms that hold our society together don’t matter.

Well, I can’t imagine a committee that could solve all those problems.  And they come down to one issue: how do you stop people from becoming Republicans?

*Is this news any more? Just breaking: a report of yet ANOTHER mass shooting, this time in Smithsburg, Maryland. Three people killed, one critically injured, and the suspect is in custody.  Neither motive nor name of the accused shooter has been released. How many deaths will it take till we know that too many people have died?

*I like to keep up on the Elizabeth Holmes/Theranos affair, and didn’t realize that her ex-boyfriend, Sunny Balwani, has been on trial since March. There was speculation that Holmes would take the stand, presumably for the prosecution since she blamed abuse by Balwani on her misdeeds. But you won’t be seeing her in his trial (this is from three days ago):

Since Balwani’s trial began, legal experts and curious onlookers alike have wondered whether Holmes might testify against Balwani in exchange for some leniency in her sentencing, although it’s not known whether she was offered that opportunity.

They got their answer today, when the prosecution confirmed in an evidentiary hearing that Holmes would not in fact be called as a witness in Balwani’s trial, according to Law360 senior reporter Dorothy Atkins, who has been covering the case.

“Prosecutor Robert Leach just mentioned that Elizabeth Holmes ‘will not be testifying in this case,'” Atkins tweeted Monday.

Holmes is scheduled to be sentenced in September. She faces up to 20 years in prison, a $250,000 fine, and the requirement to pay victims restitution for each count on which she was convicted.

*According to the Associated Press, three foreigners who fought on the Ukrainian side have been sentenced to death by the Russians in Donetsk.

Two British citizens and a Moroccan were sentenced to death Thursday for fighting on Ukraine’s side, in a punishment handed down by the country’s pro-Moscow rebels.

The proceedings against the three captured fighters were denounced by Ukraine and the West as a sham and a violation of the rules of war.

Meanwhile, as the Kremlin’s forces continuing a grinding war of attrition in the east, Russian President Vladimir Putin appeared to liken his actions to those of Peter the Great in the 18th century and said the country needs to “take back” historic Russian lands.

A court in the self-proclaimed Donetsk People’s Republic in Ukraine found the three fighters guilty of seeking the violent overthrow of power, an offense punishable by death in the unrecognized eastern republic. The men were also convicted of mercenary activities and terrorism.

Russia’s state news agency RIA Novosti reported that the defendants — identified as Aiden Aslin, Shaun Pinner and Brahim Saadoun — will face a firing squad. They have a month to appeal.

“Seeking the violent overthrow of power.” Aren’t the Russians the ones guilty of that? What power were these three seeking to overthrow?

*I had to read this article in the Wall Street Journal: “Why Côtes du Rhône Côtes du Rhône is the wine to drink right now.”. Well, “right now” is summer in the Northern Hemisphere and CdR is a heavy red. I like some of them, but don’t make a point of seeking them out when other Rhônes can provide better value for money. However, they recommend some good white versions and five red ones ranging from $15-$46. I’d go for the two whites, but won’t be buying either. Have a look if you’re interested in gutsy reds that can be good values and, if you’re lucky, have that unique black-olive nose of a good Rhône. (Other Rhones, like Châteauneuf-du-Papes and the nearly unaffordable Hermitages, are my favorite red whines in the world.)

Hili: What do we know about the life of ants?
A: Quite a lot.
Hili: And how does that help us? 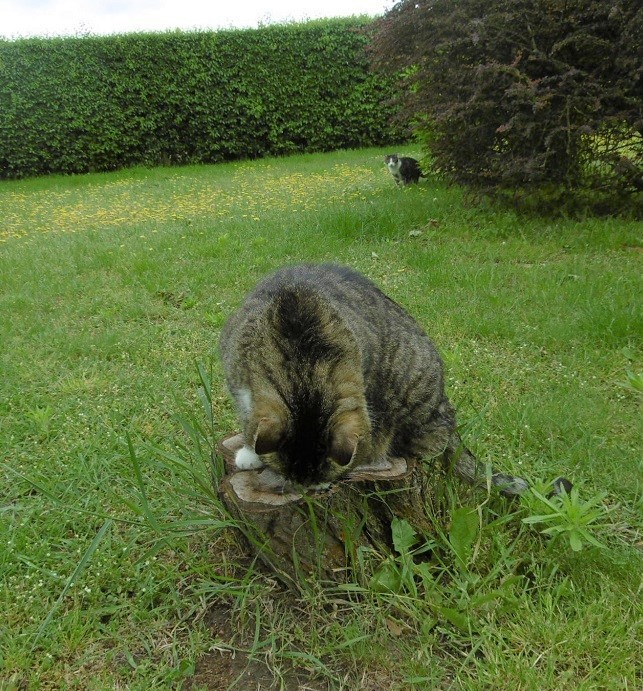 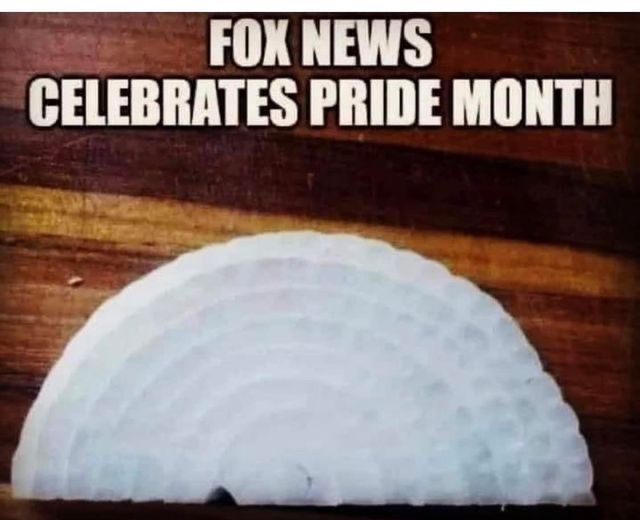 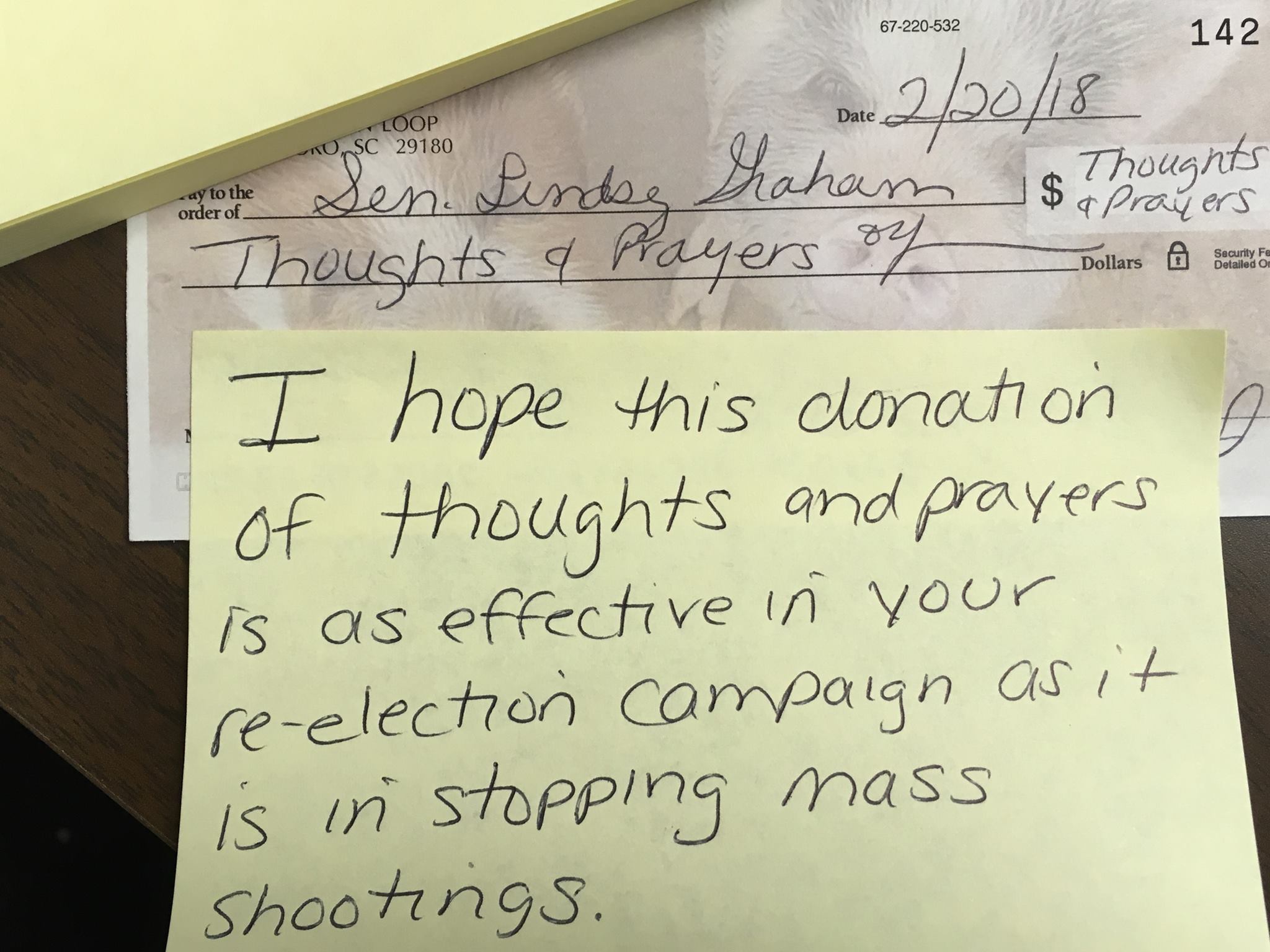 From Bruce. Can you figure it out? 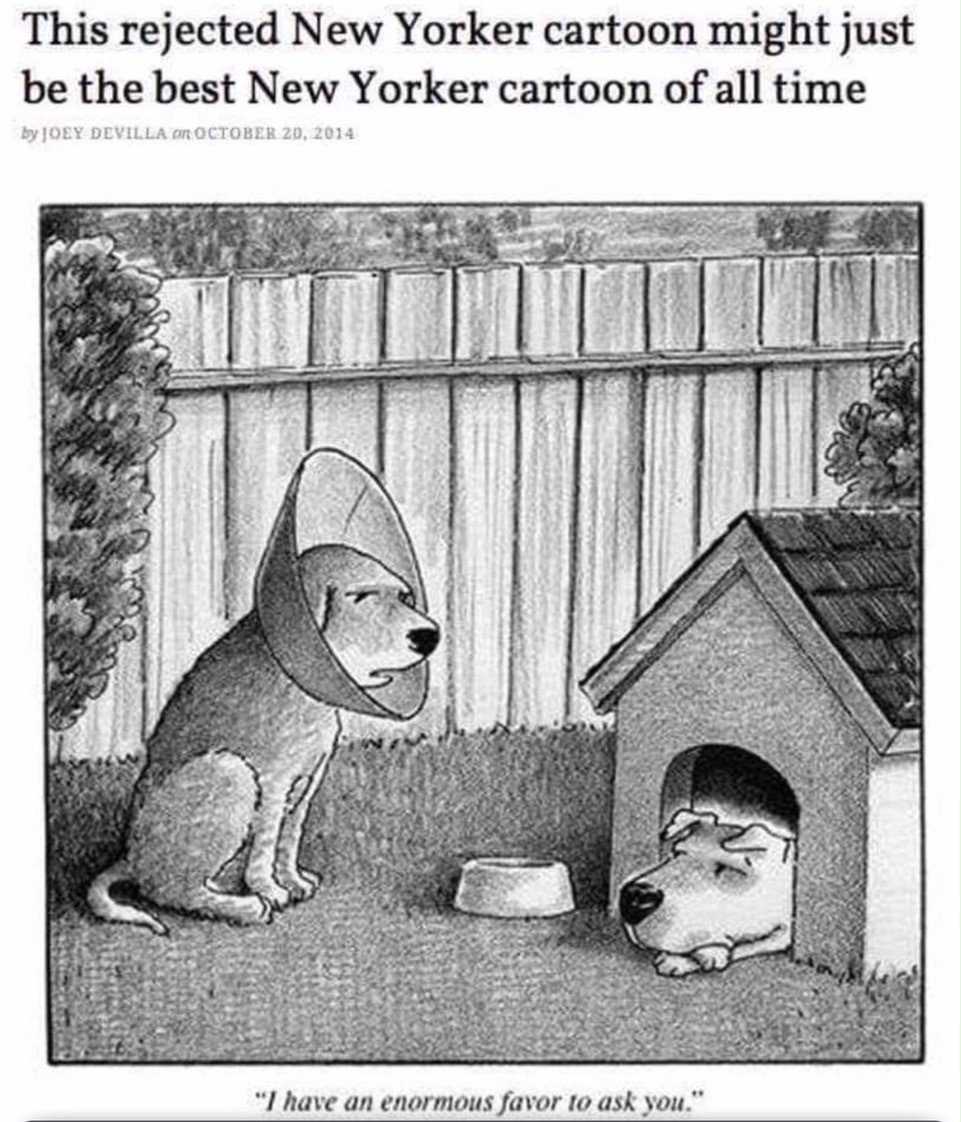 From Killian. This is a “call duck,” a specially bred version of the Pekin duck, which itself is merely a domesticated mallard.  Call ducks are affectionate, tiny, and vociferous.

i found a video of a duck faIling asleep and im convinced it’s the cutest video ever pic.twitter.com/GCFPAPivhS

From Barry. A 13 year old can’t buy booze, cigarettes, smutty magazines, or lottery tickets, but he easily procures a .22 rifle. Welcome to America!

There’s just nothing we can do pic.twitter.com/qIBJcRtkyO

Also from Barry. More fodder for anti-gun people like me:

This guy here.A Fellow vet said it perfectly. I couldn’t have stated it better. #guncontrol pic.twitter.com/dg3o8RoOgo

In 1944 she was deported to #Auschwitz and murdered in a gas chamber. pic.twitter.com/jAJN1xjytg

Tweets from Matthew. FIrst, a charge from Sgt. Meow and his Kitten Squad.

The successful ambush was led by Sgt. Meow. pic.twitter.com/8ZoH7SGJEP

The squad gets adopted!

This was the last update I've seen. pic.twitter.com/d5JnA1wfEw

More at their Forever Home:

Matthew says this is “very British”. Does Tesco really have greeters (I’m sure they’re not like this one!):

And lagniappe, a book that’s not just big, but HUGE!:

The largest and heaviest book in China:
the genealogy of the royal house玉牒, Qing Dynasty,
1-meter in thickness, and over 150 kilograms.
Collection of First Historical Archives of China. pic.twitter.com/7w0jvJmAGX