If you’re in a place that celebrates Memorial Day, you’re only halfway through the weekend, and Monday is a holiday. Today is Sunday, May 29, 2022, and apparently National Biscuit Day—again! Well, you can’t have too many days devoted to biscuits, the Great American Breadstuff.  It’s also International Day of United Nations Peacekeepers.

Wine of the Day: For me this is a very fancy nonvintage champagne: Pierre Paillard (Paillard is a great name in French bubbly), nonvintage, with most of the grapes (70% Pinot Noir and 30% Chardonnay) harvested in 2017.  The price was high: $42/bottle, but I decided I needed a treat after a few days of successful duck tending.

It was excellent: a powerful, highly rated champagne with a color a bit deeper than straw.  Pear-flavored, toasty, and gutsy, it was a good accompaniment to Fettucicne Alfredo with peas (which I add as “the vegetable”).  It was also quite dry, a quality I appreciate in a champagen. I’d buy it again, but this one is for special occasions (like duck-tending!): 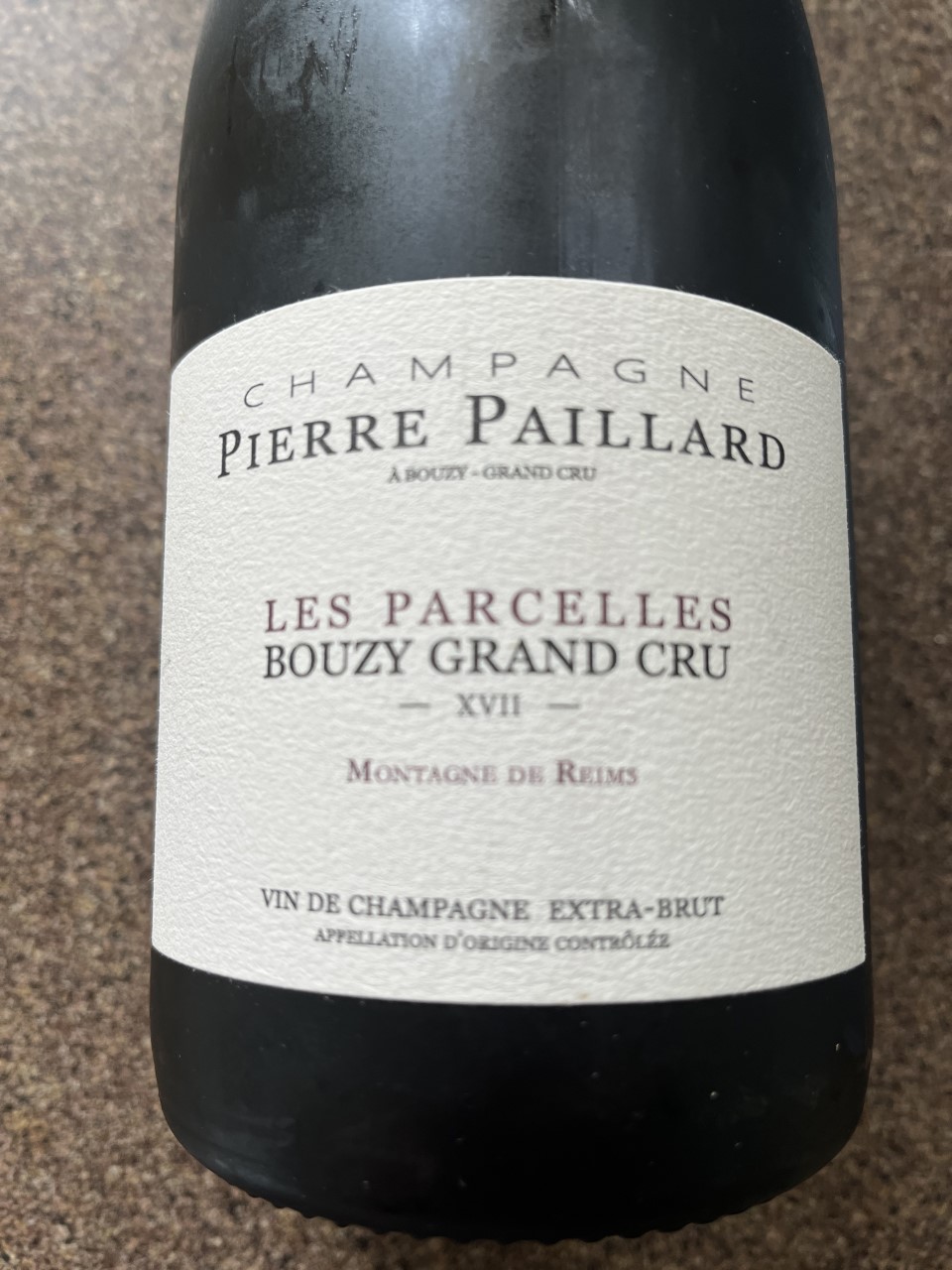 Stuff that happened on May 29 include:

Here’s the ad, and you can read the story of how the drink came to be here. 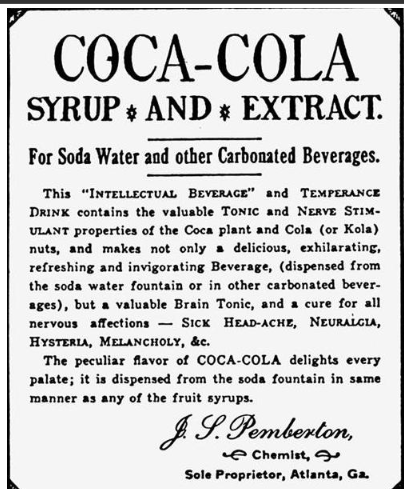 It’s been confirmed by many other observations. Here’s one demonstrating the bending of light by a gravitational field (the subject of Eddington an Crommelin’s experiment), but this shows the light from a distant quasar 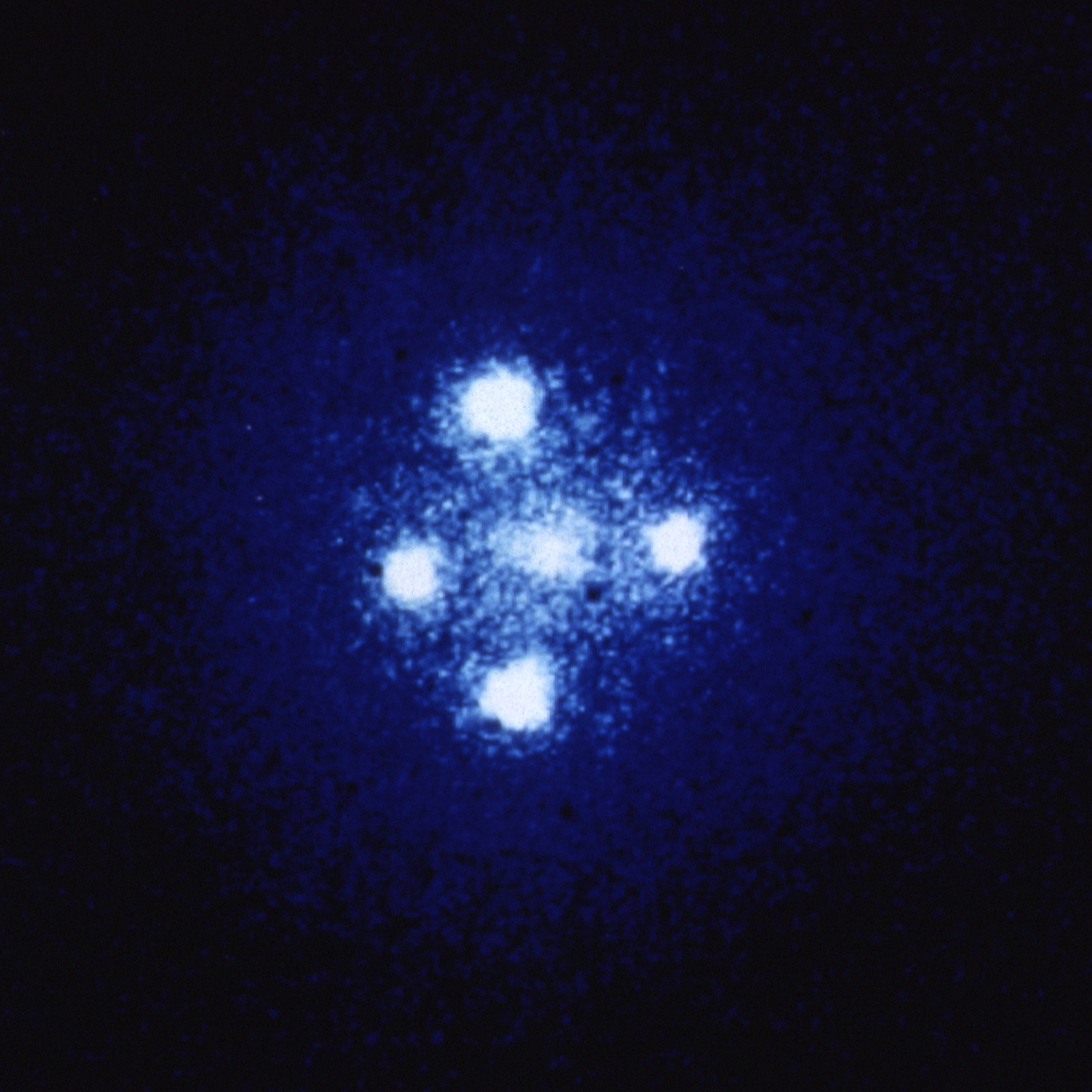 The pair on Mt. Everest. Had I known how much I loved the mountains, I would have begun climbing when I was young, and this would have been #1 on my bucket list: 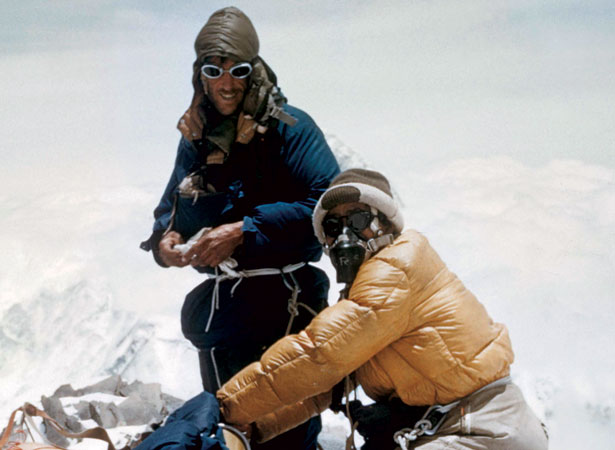 *The more the media digs into the lame response of law enforcement to the Ulvalde, Texas school shooting, the more it looks like a massive screw-up. And the main group responsible for the screw-up, and has the most blood on its hands, seems to be a group of six police officers who constitute the Ulvalde school district police force (the investigation is still in progress).

The chief of that small police force apparently (and erroneously) decided that the shooter was locked in a room by himself, despite desperate 911 calls from students that they were under attack.

Pedro “Pete” Arredondo, chief of the Uvalde Consolidated Independent School District Police Department, who was the incident commander, did not respond to requests for comment on Friday. A spokeswoman for the Uvalde Police Department referred inquiries to the Texas Department of Public Safety, and requests to the local district attorney’s office went unanswered.

Arredondo, while Border Patrol agents waited in the school to mount an assault, fiddled and diddled for over half an hour before he was overruled by the feds and the assault proceeded. By then nearly two dozen people were dead. Now we can’t point fingers until all the stones are turned over, but if anybody screwed up and delayed the assault, which is mandated by state regulations, he should at least be fired.

Today’s NYT has an illustrated timeline on the length of the entire shooter incident. Scroll down; it will make you angry.

*The It’s About Time Deprtment. Vyvianna M. Quinonez, 29, was arrested last year for punching a Southwest Airlines flight attendant in the face, drawing blood and chipping three of her teeth.

On May 23, 2021, near the end of a flight from Sacramento to San Diego, a flight attendant asked Ms. Quinonez to buckle her seatbelt, put up her tray table and “wear her face mask properly,” prosecutors said.

Ms. Quinonez used her phone to film the flight attendant and pushed the woman, prosecutors said. The attack escalated from there, as captured on video by another passenger.

Ms. Quinonez, who was sitting in an aisle seat, stood up and punched the attendant in the face multiple times, according to the video. She also grabbed her hair before the woman was able to move back up the aisle. Several passengers grabbed at Ms. Quinonez’s clothes to try to stop her.

Here’s the attack (you did want to see it, didn’t you?). If you ask me, Quinonez got off easy. If you believe in deterrence, enforcing the law strictly in cases like this is a good deterrent.

28-year-old Vyvianna Quinonez has been arrested for punching a flight attendant repeatedly after being told to follow standard inflight instructions. The incident happened on a Southwest flight to San Diego. The flight attendant lost her two front teeth. pic.twitter.com/jfhWf1sHkt

Quinonez was just sentenced to 15 months in federal prison, and also ordered to pay about $26,000 in restitution and a $7,500 fine. That seems like a fairly light sentence to me, at least if you believe in deterrence.

John Paul Stevens issued the call after 17 people were killed at Marjory Stoneman Douglas High School in Parkland, Fla., in February 2018. The attack prompted hundreds of thousands to demand action the next month to end gun violence at the March for Our Lives.

In a March 27, 2018, New York Times op-ed, Stevens praised the protesters and their call for stricter gun control laws. “But the demonstrators should seek more effective and more lasting reform,” he wrote, about a year before his death at 99. “They should demand a repeal of the Second Amendment.”

Stevens said the amendment was adopted out of concern that a national standing army might pose a threat to the security of the states. “Today that concern is a relic of the 18th century,” he wrote.

But of course that recommendation is a non-starter, as it requires a 2/3 majority of the Senate and the House to get started, and then ratifying the removal by 3/4 of the states. And then what? Presumably, without Constitutional guidance, each state could pass its own gun laws. Now that’s a thought! But some are takig up the cudgels:

Writing in the New Republic on Thursday, Walter Shapiro, a fellow at the Brennan Center for Justice at NYU School of Law and a lecturer in political science at Yale University, said that “the hard truth is that the core problem is the Second Amendment itself. And America is going to reel from one mass murder to another unless the Second Amendment is repealed or the Supreme Court drastically reduces its scope.”

“As a starting point,” he added, “Democrats should drop the mealy-mouthed formulation, ‘Nobody supports the Second Amendment more than I do, but still. … ’ Claiming fidelity to the Second Amendment has never convinced a single NRA supporter of a candidate’s sincerity, but it has stopped bold thinking about lasting solutions to America’s gun crisis.”

I’m not sure why the WaPo published an untenable suggestion. Still, Stevens’s call to at least clarify the Amendment makes sense. Here’s his rewrite:

Stevens suggested adding five words (in italics below) to the amendment: “A well regulated Militia, being necessary to the security of a free State, the right of the people to keep and bear Arms when serving in the Militia shall not be infringed.”

*A multimedia article in the Wall Street Journal details not only the rise in illegal immigration from the Bahamas and Cuba to Florida (up more than 400% last year over previous years, but the horrible peril of that journey as well as the uneven laws that apply to immigrants from Cuba versus the Bahamas. Economic and political unrest in both countries have driven the increase, but of course we hear nothing about immigration reform from either party. Wasn’t Kamala Harris supposed to be in charge of this?

A: Not everything is what we think.
Hili: That’s a myth, I’m always right.
A: Many editors-in-chief think so. 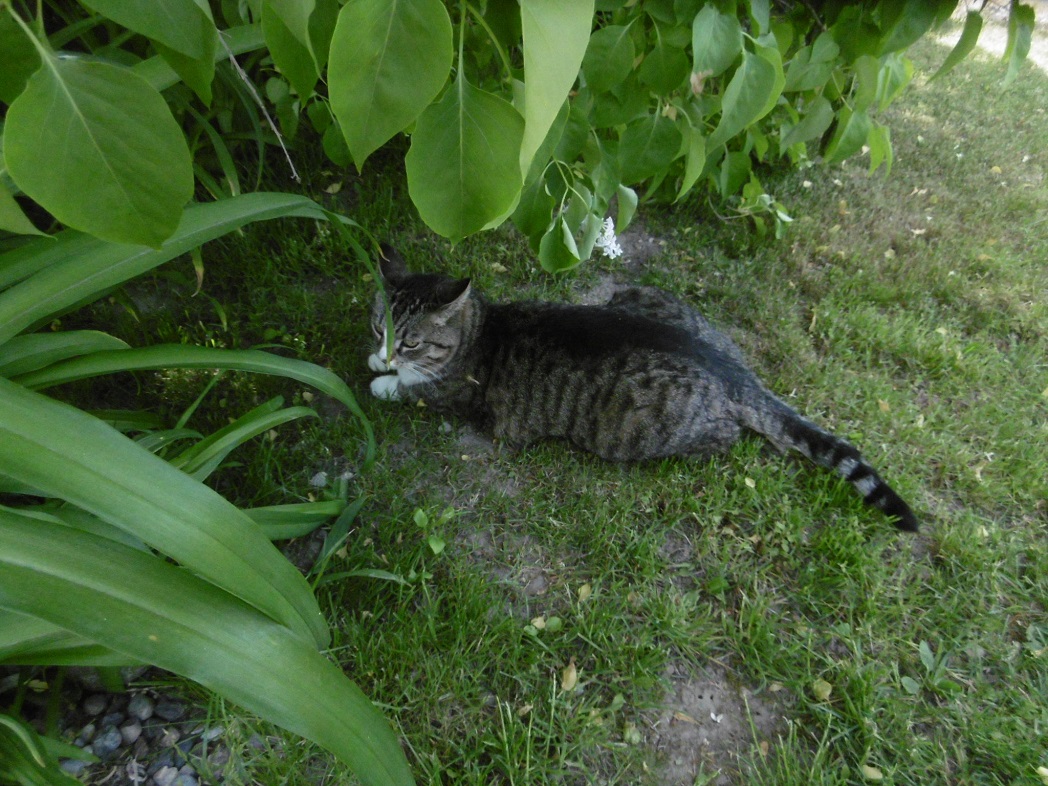 And from a few weeks back, Karolina hugging Kulka.

A multiple disaster from Only Duck Memes. You couldn’t make this up: 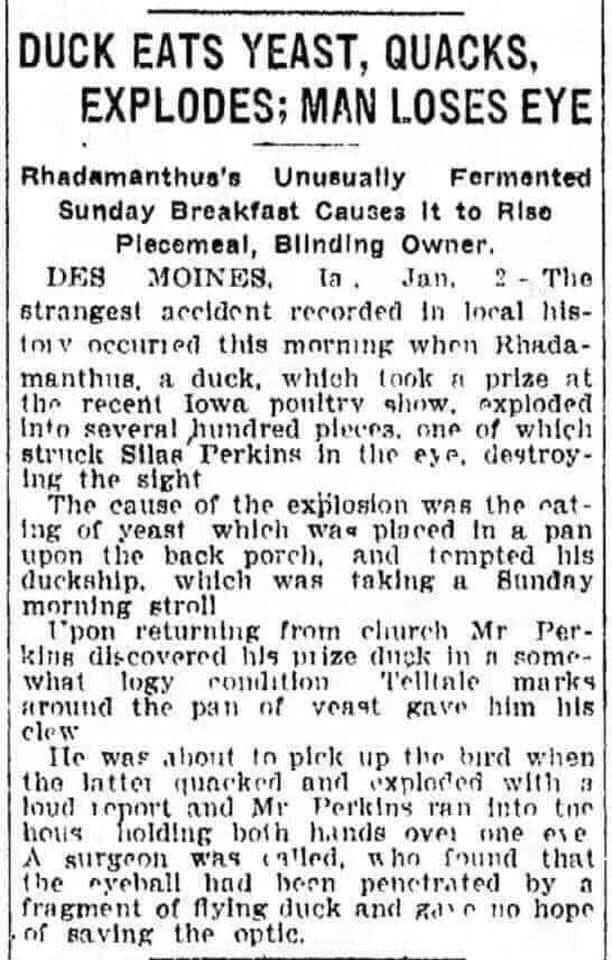 A psychedelic cat picture I found in my files.  Enlarge, tune in, and drop out: 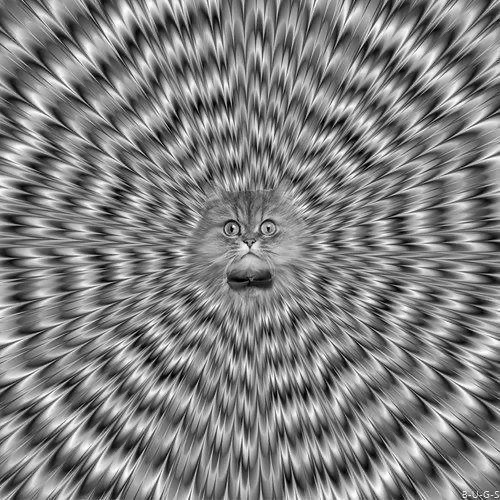 From Bruce: A Memorial Day Quote:

The best way to prevent abortions is by arming fetuses. #IAmTheNRA

From Barry: one very strong and very angry rhino!

I told you no parking here bro!! pic.twitter.com/Nga2w1DPY2

From Ginger K., a photo that epitomizes America:

Preemptive, yes this kind of shit goes in in the U.S. pic.twitter.com/9npVDjLNfa

From the Auschwitz Memorial: This man lasted only three days:

Tweets from Matthew.  A peony nest, but what happens when the flower wilts?

Everything turns out right in Dodo Land, which is why I want to live there:

She was stuck up there for four days 😱 @LACityPets pic.twitter.com/eyayLEsyEs

This is amazing: not only do they have an ovipositor that can drill through wood, but they can precisely detect where a grub is underneath the bark so an egg can be laid just in the right place:

Thanks to my students I could witness this giant #ichneumonid wasp Megarhyssa rixator in action, parasitizing the larva of a giant woodwasp inside the wood with her mega long and flexible ovipositor. #biodiversity of NL @wur pic.twitter.com/qWdyn7y6Nv

I don’t know what the Apple Dino Programme is, but here’s Matthew’s comment:

Here’s a long extract from the Apple dino programme, which is very good indeed, as you can see. They have consistently used extant morphology and behavioural ecology as the starting point for the reconstructions.

In Asia, a bizarre dinosaur wades through the wetlands. Taller than T. rex but fully feathered, its body is the perfect feeding ground for blood-sucking flies. Stream #PrehistoricPlanet now on @AppleTVPlus