If you’re bored with the science debates in New Zealand, skip this article. But do realize that I post these only because they show the power of ideology to affect science education in a bad way, but also to make them available to New Zealanders, many of whom silently agree with me but are scared to voice their opinions. The hegemony of indigenous culture worship in New Zealand has grown so strong that it’s created a climate of censorship, chilling the speech of those who disagree with what the government and educators are doing and saying.

Because New Zealand’s press, about as woke as a press can be, effectively prohibits criticism of the government’s initiative to push “indigenous ways of knowing” (Mātauranga Māori, or “MM”), into the science class, it takes the Aussies to smack them on the tuchas. (See this post from yesterday as an example.)

It took me some time to find this new article in The Australian, which is paywalled (inquire judiciously for a copy), but the skills of the University of Chicago’s librarians are unlimited. I’ll put the headline up, but you won’t be able to get access. (UPDATE: I just found a clickable copy on the New Zealand Initiative Website). 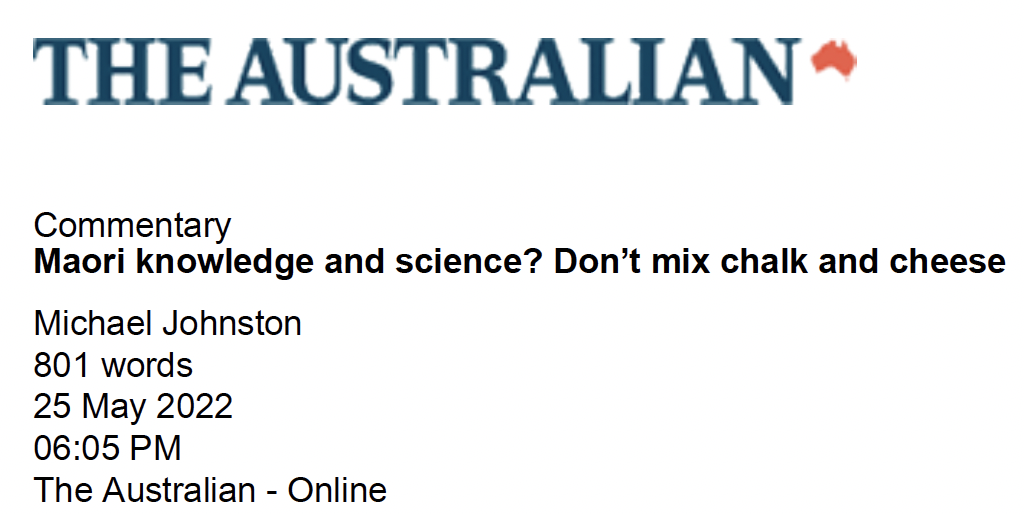 I see from Wikipedia that this paper is supposed to be “centre-right”, but others have told me that that’s the Aussie equivalent for “center” in America. Be that as it may, Johnson’s article is about as good a summary of the difference between MM and science as you can read, and tells explicitly why the NZ government’s initiative to have the two systems taught as coequal “science” is barmy. I’ll give some quotes. I have a few quibbles with Johnston’s characterization of modern science, but on the whole this article should be dropped by planes as millions of leaflets over New Zealand.

Note as well that Michael Johnston is a Kiwi who trained in both Oz and NZ (he has a Ph.D. from Melbourne), and now lives in Wellington as a senior fellow of the New Zealand Initiative. Why didn’t he publish this in the New Zealand media? I’m sure it’s because none would dare print it.

If it is properly contextualised, including mātauranga Māori in the school curriculum stands to enrich young New Zealanders of all cultural backgrounds. To do that successfully though, we must be careful not to attempt to force it into a place in which it doesn’t fit.

Pre-colonial Māori had an impressive amount of knowledge about many things. For one, they were astonishing navigators. By observing the stars, sea currents and the flight patterns of birds, they were able to traverse millions of square kilometres of open ocean in small outriggers, to successfully locate, and land on, tiny islands.

An important subtlety lost in the media storm over the Listener letter is the distinction between knowledge itself and the methods by which it’s discovered. Did the navigators of the Pacific Ocean develop their knowledge through a process of explicit theory testing like that used in Eurasian science?

It wasn’t until 1959, when philosopher of science Karl Popper published his book, The Logic of Scientific Discovery, that this approach was fully articulated in Eurasian scientific thought. The idea of making predictions from generalisable, universalist theories, though, has been around for considerably longer.

Even so, while Māori almost certainly developed their knowledge on the basis of systematic observation, they probably were not motivated to construct generalisable theories. Mātauranga Māori is more concerned with the local and particular than with the universal and abstract.

Philosophically, this is probably one of the two truly substantive differences between Eurasian science and mātauranga Māori. Whereas the former seeks to make claims that are true everywhere and always, the latter is often more concerned with what is true in a local area, for the benefit of the people living there.

You may not know that Popper worked in New Zealand, fleeing Nazi Germany in 1937 and staying in NZ until he left for Britain in 1946. Several Kiwis I know still remember the guy (probably from Popper’s later visits there).

Popper’s Big Idea was, of course, that the hallmark of a scientific theory is that it must be falsifiable (i.e. there must be conceivable ways of showing its claims to be wrong), and if it’s not falsifiable it’s not science. Surely lots of MM would fall as “not science” in this classification (including its creationist view of life), but philosophers of science have their own issues with the “falsifiability” demarcation. (For one thing, they say that “falsified” theories can often be saved by making post hoc assumptions or assertions.) In general, though, I think Popper’s views have merit. Eventually, if a theory can’t be tested against the real world and conceivably disproven, people stop paying attention to it. This is likely what is happening with “string theory”. But I wouldn’t call such theories “not science”, for some day somebody might think of a way to test them.

Further, there are a lot of modern scientists finding out things that likely don’t fall into the Big Theory category, but are still of interest. The phylogeny of, say, ants doesn’t fit into a theory (though someday it could), but is still useful knowledge of the world and can even predict future findings. Overall, however, what has moved understanding of the Universe forward are big theories: Newtonian mechanics, quantum mechanics, the special and general theories of relativity, evolution, the “central dogma”, atomic theory, the “germ theory of disease,”and so on.

MM is not placed to produce such theories because of its particularity: it is aimed at improving people’s life in specific areas, like how to grow crops and catch eels. Its factual claims are practical, and based on trial and error alone.  Its absence of theory, and lack of drive to construct theories, is one reason it shouldn’t be taught as equivalent to modern science. Also, as Johnston notes, early forms of modern science, like that of Galileo, were not dualistic—they did not invoke spiritual forces. MM, on the other hand, is dualistic, and explicitly so.  Here’s a trenchant example of that dualism:

Whatever the precolonial Māori worldview was like, it was not dualistic. Everything was at once material and spiritual. This is perhaps the most important reason not to try to shoehorn mātauranga Māori into the science curriculum. To do so would be a disservice to both knowledge systems.

When pre-colonial Māori were on the ocean, they would chant karakia (prayers) to Tangaroa (the god of the ocean). Apart from expressing deeply held beliefs and imbuing mariners with courage in their perilous endeavours, these chants may well have had practical import. The practice might have been a way to keep track of time, or to keep rhythm while rowing. These possibilities illustrate the internal coherence of a non-dualistic worldview.

Contrastingly, a draft biology standard recently produced by New Zealand’s Ministry of Education claimed that fermentation can be enhanced by chanting karakia. This illustrates that trying to force a non-dualistic belief into a materialist knowledge system produces incoherence and confusion. (That standard, thankfully, has been revised.)

Rather than attempting to mix chalk and cheese, we’d do better to represent each knowledge system in its own right. If we do that, instead of sowing confusion we might start a conversation that will provide food for thought for generations to come.

This is hardly inflammatory, and there’s not much to argue with. But so keen are the NZ government, public, and educational authorities to avoid the appearance of criticizing anything Maori, that they’re not only dismantling the country’s science, but they’re starting to censor “unofficial” opinion.

12 thoughts on “Aussies school Kiwis on limits of “traditional knowledge””