I think I’m going to do only short posts today, with perhaps one medium-length one. Here’s a fairly short one based on an article in yahoo! news (click on screenshot to read).

Lowell High School is (or was) one of America’s best and most rigorous schools.  Here’s what U.S. News and World Report has to say about it in its last report):

Lowell High School is ranked #82 in the National Rankings. Schools are ranked on their performance on state-required tests, graduation and how well they prepare students for college. Read more about how we rank the Best High Schools.

As you see, it’s one of America’s best high schools. But not for long  Click to read: 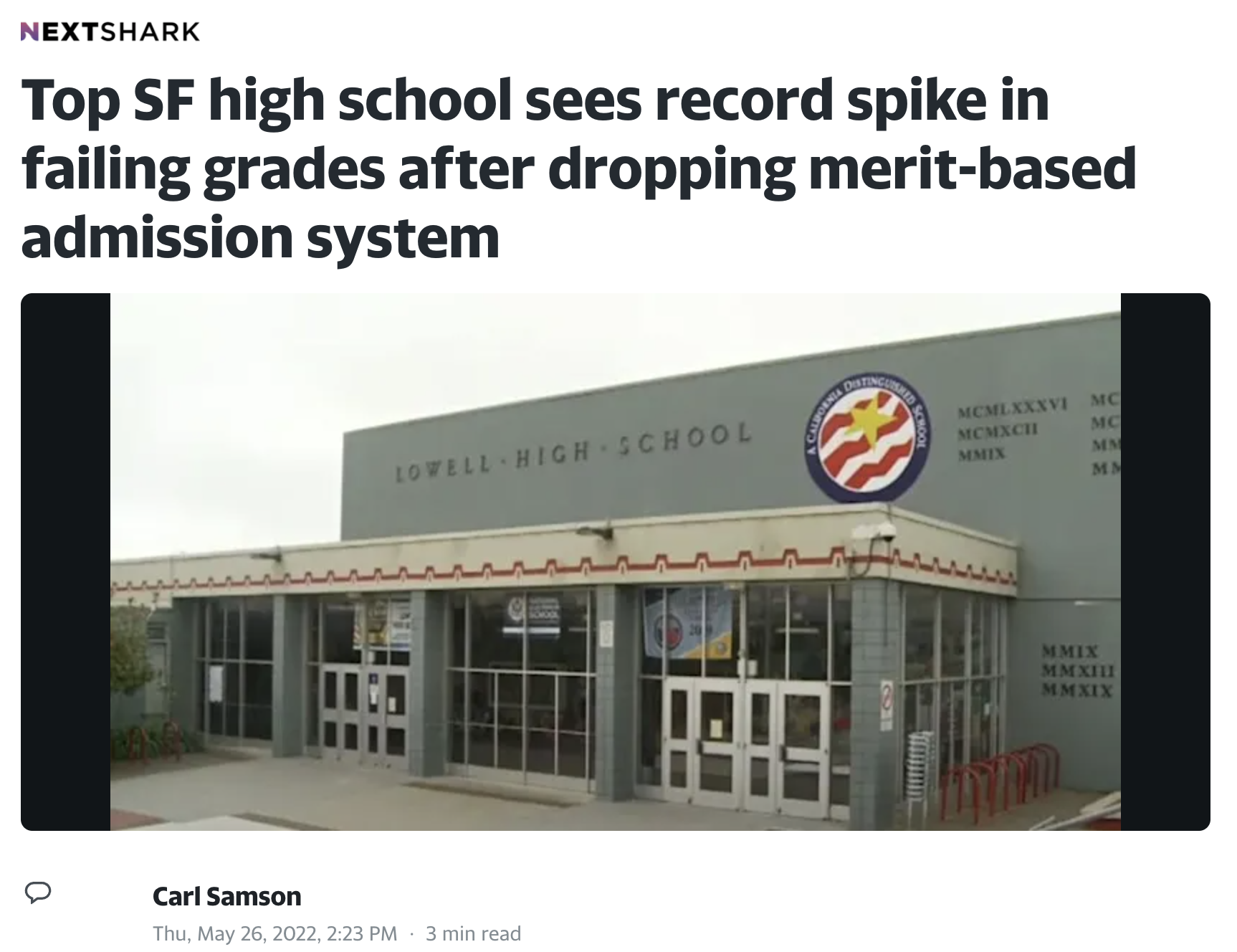 The reason? Because the school decided to prioritize equity over merit, going from merit-based admissions to a lottery system.  From yahoo! (emphasis is theirs).

San Francisco’s Lowell High School, regarded as one of the best in the nation, is seeing a record spike in Ds and Fs among its first batch of students admitted in fall 2021 through a new lottery system instead of its decades-long merit-based admissions.

Of the 620 first-year students admitted through the lottery, nearly one in four (24.4%) received at least one letter grade of D or F in the said semester, according to internal records obtained by the San Francisco Chronicle. This marks a triple increase from 7.9% in fall 2020 and 7.7% in fall 2019.

Principal Joe Ryan Dominguez attributed the rise in failing grades to “too many variables.” Last month, Dominguez announced his resignation from the school district, citing a lack of “well organized systems, fiscal responsibility and sound instructional practices as the path towards equity.” [JAC: Donguez took over only last fall!]

The lottery system was born out of a long, contentious battle that began in the wake of George Floyd’s death. Proponents of the new system argue that the merit-based system was racist as it resulted in an underrepresentation of Black and Hispanic students, while opponents say it would harm Asian students – who make up the majority of Lowell’s population – and undermine the benefits of a competitive academic environment.

Discussions regarding a long-term policy are still being held. Outgoing District Superintendent Vincent Matthews has proposed an extension of the lottery system, while critics such as Members of the Friends of Lowell group and Lowell’s own Chinese Parent Advisory Council continue to lobby for the return of the old system.

The San Francisco School Board, which introduced the lottery system at Lowell, saw three of its members removed in February after a recall election initiated over misplaced priorities, including what many felt were “anti-Asian” policies.

This is what you get when you prioritize equity over meritocracy, especially when the remediation of inequity occurs far too late down the line. It’s clear that merit is competing with equity, as that’s precisely what proponents of the new system maintain. As usual, Asian students—who are regarded as people of color when they’re attacked but as “white adjacent” when they succeed—are the big losers.

The solution evades me, as I do favor equality of opportunity if not equity, and also feel that some brand of affirmative action must be exercised as a form of reparations. But admitting D and F students does nobody any favors, as by the time the students get into high school, the results of centuries of discrimination have already worked on the students.  I keep thinking about how to fix this problem, because, after all, society owes minorities some reparations. John McWhorter has non-affirmative action solutions (teach phonics, end the drug war, and don’t force everyone to go to college), but I can’t quite go that far.

There are two ways to fix this. One, enacted by Los Angeles and San Diego schools, is to relax grading standards, creating a “holistic grading” system that virtually eliminates Ds and Fthis is done by  keep giving students chances to improve until they get the right grade. That has the merit of giving feedback to students, but the problem of misleading them into thinking that life works that way.

The other way, which I recommend, is a form of affirmative action that will apply while the harder work gets done: trying to create equal opportunity for everyone starting at birth. And we know that that will take years, a lot of resolve, and buckets of money. But it’s the only permanent fix.

In the meantime, we must at least admit that equity and meritocracy are, at present, not compatible. The more meritocratic your standards, the less equity you get. Then, when we admit this to ourselves, we can set about fixing it. We can’t resolve the problem with tricks like reducing standards and “holistic” grading.