When liberal venues such as The Atlantic start picking holes in the progressive Left’s irrational or woke tendencies, then you may find some hope that the whole insanity gripping the Left (and heartening the Right) might be coming to an end. I hold out no such hopes, but nevertheless cheer on people like staff editor Helen Lewis, who in this Atlantic article raises the possibility that getting rid of the word “woman”, as many Progressives want to do—the rationale is that the word must now include transgender women, and this, causing confusion, mandates flushing “woman” down the drain—may have deleterious consequences for the Left and, in particular for the abortion debate.

If there’s any issue that holds out hope that Democrats won’t be totally destroyed in this November’s elections, it’s the Supreme Court’s upcoming dismantling of Roe v. Wade. The current construal of that soon-to-be defunct decision is supported by 60% of Americans, and if the Dems can leverage and keep harping on a a sensible abortion position like Roe (even if it can’t be passed in Congress), their platform would have more appeal.

Unless, that is, the whole issue gets sabotaged by those who want to get rid of the word “woman” on ideological grounds. And so it is going, pushed along by the newly woke ACLU who have decided that in every relevant respect, including sports, abortion, and jailing, “transwomen are women”. Well, yes, for nearly all purposes, and I’m happy to use whatever pronoun makes someone comfortable. But I won’t pretend that biological men or women who change gender are exactly the same as cis men or women in some circumstances. And expunging “women” from the abortion debate is not going to make a lot of biological women (or people in general, including lesbians and gays) very happy. 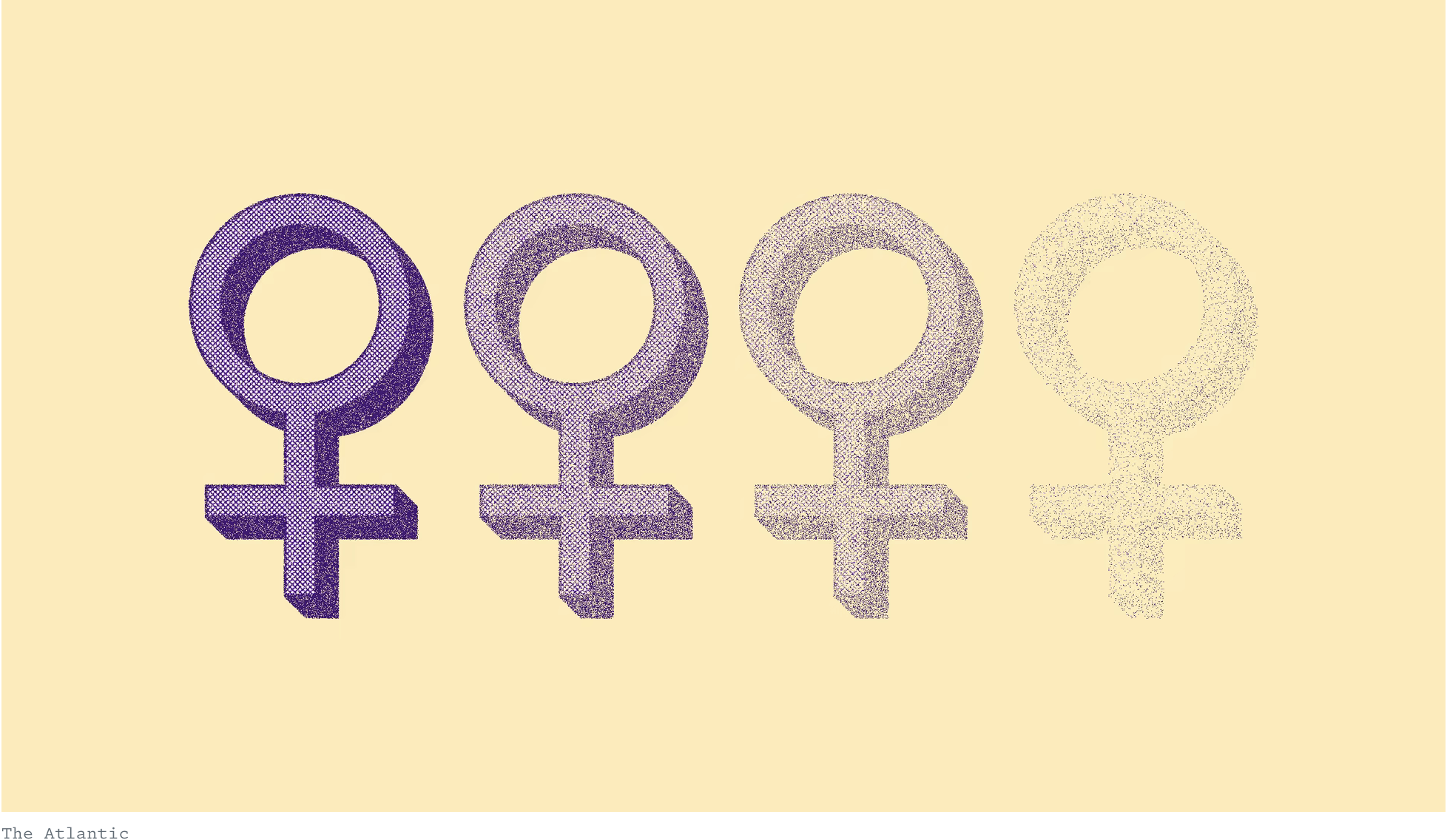 A few of Lewis’s excerpt with the relevant tweets. Here’s one that got her going:

Protecting abortion access is an urgent matter of racial and economic justice.

You can see the problem, of course. Abortion bans disproportionately harm biological women above all, if you take the normal meaning of “disproportional.” Lewis notes that 99.9% of those who need abortions are cis women. She dissects the tweet:

, , , on May 11, the ACLU once again caught the moment, posting a tweet that perfectly encapsulates a new taboo on the American left: a terrible aversion to using the word women.

According to the ACLU,

■ Black, Indigenous & other people of color

■ those working to make ends meet

Wait. Run that second point past me again? Surely one of the many things to recommend lesbian sex is that it doesn’t risk getting you pregnant. Unsurprisingly, multiple commentators struggled to see how abortion bans “disproportionately harm the LGBTQ community”—even if those laws do indeed harm parts of it, such as queer women and trans men who have procreative sex. The ACLU’s defenders have pointed to data from 2015 showing that high-school students who self-define as lesbian but have had sex with male partners are more likely to get pregnant than their female counterparts who identify as heterosexual. But comprehensive longitudinal studies have found that lesbians across the age spectrum are about half as likely to get pregnant as straight women. Another suggestion would be that abortion bans could also affect IVF provision, which many gay and lesbian couples rely on to have a baby. To a casual reader, though, the ACLU has used phrasing that reads like an incantation—a list of disadvantaged groups that are more interesting than women. There’s something of the record-store hipster about it all: I care about groups with intersecting oppressions you haven’t even heard of.

Lewis reminds us of how the ACLU arrantly changed the words of the late Justice Ginsburg in a pro-abortion ad last year, eliminating all references to “women.” Remember this?

With Justice Ruth Bader Ginsburg’s death, we lost a champion for abortion and gender equality. And on the anniversary of her death, the fight to protect abortion access is more urgent than ever. pic.twitter.com/vIKadIHouN

Why is this effacing of “women” happening? Because supposedly jettisoning the word “women” makes one’s appeal more inclusive and thus rakes in more money for organizations like the ACLU (they’ll get no dosh from me).

One of the most irritating facets of this debate is that anyone like me who points out that it’s possible to provide abortion services to trans people without jettisoning everyday language such as women is accused of waging a culture war. No. We are noticing a culture war. A Great Unwomening is under way because American charities and political organizations survive by fundraising—and their most vocal donors don’t want to be charged with offenses against intersectionality. Cold economic logic therefore dictates that charities should phrase their appeals in the most fashionable, novel, and bulletproof-to-Twitter-backlash way possible. Mildly peeved centrists may grumble but will donate anyway; it’s the left flank that needs to be appeased.

Yep: see for yourself.

In case you didn't hear it right the first time:

It’s not hard to see that this circumlocution and annoying repetition takes away the power that the Left really has on this issue: to most liberals, abortion instantiates a biological woman’s right to control her body and that right is being taken away. (And yes, it’s only biological women, who happen to include transgender men, who need abortions).

But does eliminating “woman” really help the abortion-rights campaign in America as opposed to catering to a few people who insist that men can get abortions? Lewis doesn’t think so:

In Britain, where I live, the British Pregnancy Advisory Service, a major abortion provider, announced that it would continue to use women and other gendered language in much of its general literature, while developing tailored materials for clients who identify otherwise. Not only has the sky not fallen as a result, but Britons continue to have access to state-funded abortions, paid for out of general taxation. While American charities congratulate themselves on the purity of their language, the communities they serve—people of all genders who could have a free abortion in Britain—struggle to access terminations. No one should be polishing their halo here.

And the potential harm: ignoring the most important issues (and alienating supporters) by getting bogged down by pronouns. As Lewis notes above, one can still be sensitive to transgender men who can get pregnant and yet still keep the word “woman”. She continues:

Language battles should not distract us from the true injustice raised by the potential repeal of Roe v. Wade: the removal of the right to privacy and bodily autonomy for 51 percent of Americans. But something is lost when abortion-rights activists shy away from saying women. We lose the ability to talk about women as more than a random collection of organs, bodies that happen to menstruate or bleed or give birth. We lose the ability to connect women’s common experiences, and the discrimination they face in the course of a reproductive lifetime. By substituting people for women, we lose the ability to speak of women as a class. We dismantle them into pieces, into functions, into commodities. This happens in many ways. This week I also saw an Axios editor rebuke a New York Times reporter for writing “surrogate mothers” rather than “gestational carriers”—as if the latter phrase were not dehumanizing, a whisper away from “vessels.”

To her credit, Lewis does consider at several points reasons people adduce for eschewing the word “woman”, but in the end rejects them. Her last sentence here is eloquent:

In my view, the best argument for gender-neutral language in the abortion debate is the ACLU’s unspoken one: History suggests that society doesn’t care much about women, so maybe abortion rights will have more appeal if supporters invoke some other causes instead. And yet I can’t stomach it. Supposedly progressive groups like the ACLU are free riding on the work of centuries of feminist activism, all of it based on the implicit or explicit premise that there are two sexes, one that did the voting and property-owning and being president, and one that did the unpaid scut work and giving birth. The ACLU can afford to wipe away the word women only because everyone knows which half of the population needs abortions. Women will continue to exist, and to be disproportionately harmed by abortion bans—even if their existence becomes unspeakable.

Now that is good writing!

22 thoughts on “The Atlantic: deep-sixing the word “woman” in the abortion debate for ideological reasons does not help the cause”