Here we have three articles about a suit filed against the State of California by four female prison inmates who claim violation of their rights by transgender women who were moved to women’s prison’s by a recent California law, SB-132.  The first article is by the ACLU, the second by the feminist organization WoLF (“Women’s Liberation Front”) which opposes transsexual women in women’s prisons, and the third by USSA News, a right-wing organization. Read for yourself; the story is pretty much the same, though spun in different ways by different organizations. 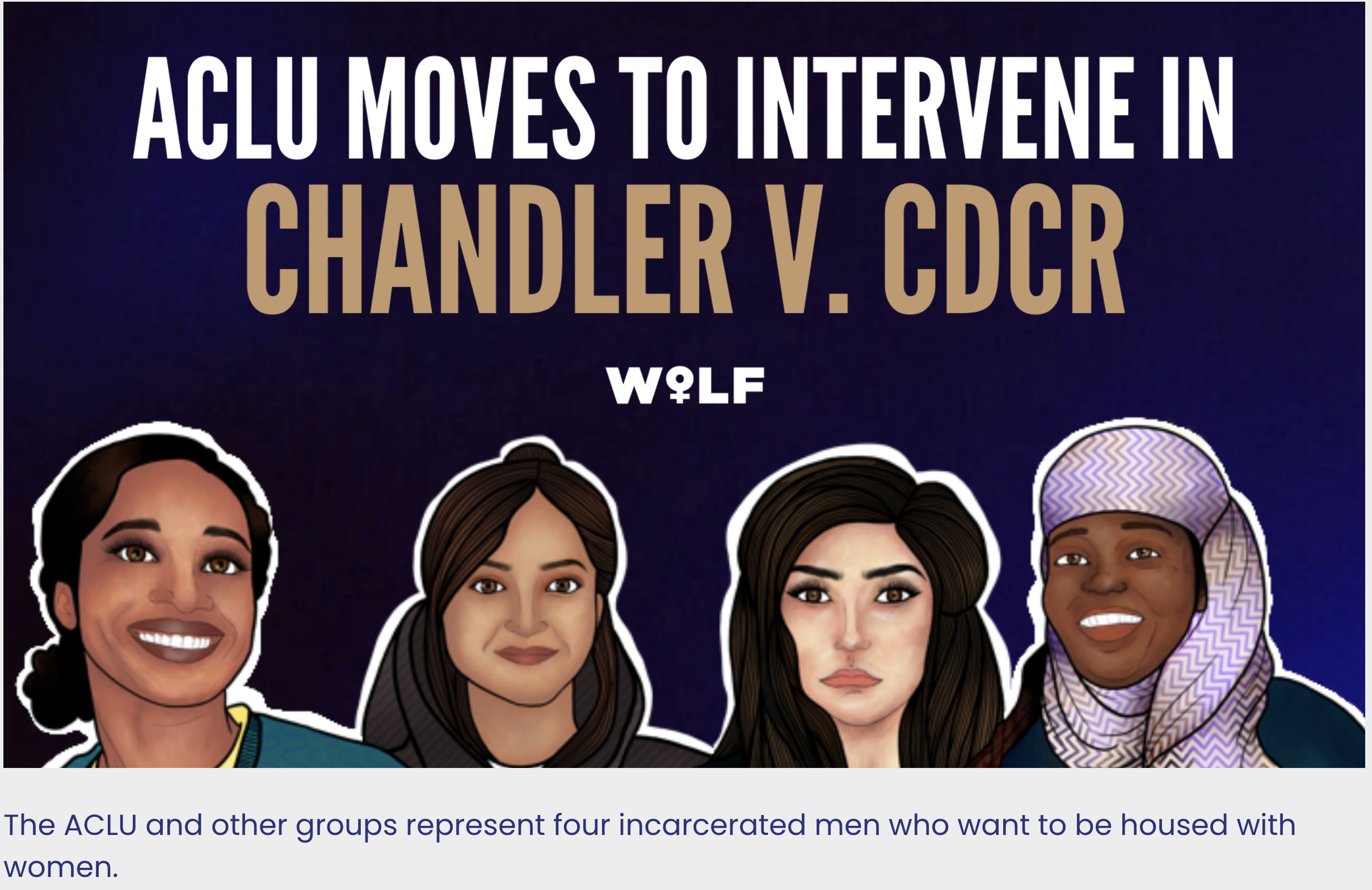 SB-132, the Transgender Respect, Agency, and Dignity Act, has been in force in California for sixteen months; it permits male inmates who identify as women to seek transfer into women’s prisons. There is no requirement that the men have had surgery or hormonal treatment, a diagnosis of gender dysphoria, or any legal documents supporting their identification as women. All that’s required for such a request is that a biological male in a men’s prison assert that they identify as a woman.

According to WoLF, 300 biological men who identify as women have requested such transfers:

The ACLU objects to the state’s choice to slow the transfer of the more than 300 men who have sought transfer to women’s facilities, one-third of whom are sex offenders (though the ACLU denies this documented, material fact in its court pleadings). One of WoLF’s plaintiffs was sexually assaulted by one of the dozens of men who have already been transferred, and she suffers ongoing trauma as the state refuses to admit that her attacker is a man. So much for “this never happens.” (It has also happened in New Jersey, Washington, New York, and everywhere else that women are inhumanely locked in cages with men.)

Apparently SB-132 is quite lax about its requirements. As stated in the lawsuit against California, the suit quotes the original law and how it is to be implemented:

3. S.B. 132 limits Defendant CDCR’s ability to deny an individual’s “preferred housing placement” only to situations where CDCR “has management or security concerns with an incarcerated individual’s…preferred housing placement preference” and certifies “in writing a specific and articulable basis why the department is unable to accommodate that…housing preference” and CDCR “shall not deny…a housing placement…based on any discriminatory reason, including, but not limited to…The anatomy, including, but not limited to, the genitalia or other physical characteristics, of the incarcerated person” or the “sexual orientation of the incarcerated person” or for “a factor present among other people incarcerated at the preferred type of facility.” Cal. Pen. Code § 2606(b)-(c).

The suit asks for these provisions of SB-132 to be suspended on Constitution grounds involving privacy and safety.  The ACLU  and its co-litigants, however (a group of pro-transgender and LGBTQ+ organizations) object to the WoLF filing and on May 9 filed a motion to intervene, apparently on the grounds that the ACLU does not trust the state of California to take seriously the interest of its clients (the transgender omen who want to be moved into women’s prisons).

The ACLU, in the article above, rejects the WoLF lawsuit.

The Women’s Liberation Front (WoLF), an anti-trans organization based in Washington, DC, filed Chandler v. CDCR in November in the U.S. District Court for the Eastern District of California. WoLF filed the lawsuit on behalf of three incarcerated women and Woman II Woman, a California-based nonprofit. The filing was replete with intentional and serial misgendering, and rehashed sensationalist and debunked claims about transgender women supposedly perpetrating violence.

This is one of the few cases in which transsexual people have to be judged differently from “cis” people, especially given the provision that all that’s required to request such a transfer is to claim that your gender is a women. No other proof need be adduced. This is clearly unfair and dangerous to women, especially if the transgender women are biological men who were convicte of sex crimes like rape.

This is clearly not one of the larger problems afflicting America, but I do think that one must do more than take a biological male’s word that they are female when the only evidence for that is self-identification. What bother’s me is the ACLU + co-litigant’s claim below, on page 3 of the motion:

17. Proposed Intervenors deny that “men as a class” are defined and differentiated from “women as a class” by their “anatomy, genitalia, physical characteristics, and physiology.” The remaining allegations in Paragraph 17 consist of legal arguments and conclusions to which no response is required. To the extent a response is required, Proposed Intervenors deny the allegations in Paragraph 17. To the extent that Plaintiffs purport to quote from and characterize S.B. 132, that document is the best evidence of its own contents.

The bit in bold is what I really object to, and show how the ACLU has gone off the rails with respect to sex. In a well-motivated attempt to protect the rights of transgender people, in this case they may (as with the ACLU’s stand on transgender women competing in women’s sports), be committing fundamental unfairness. And, at any rate, they are biologically wrong. I’ve already indicated that to biologists, human “men as a class” are defined and differentiated from “women as a class” because the former have the ability to make sperm and the latter eggs. To deny this, even in the service of ideology, is to deny biological truth.

And so the ACLU once again dissimulates in the interest of ideology. As for the danger to cis-women from trans-women in prison, I’m not an expert on that but there are some cases in which the latter have endangered the former. Because genuinely transgender women in men’s prison’s also face dangers like rape or sexual assault, we need some rules about this, but those rules must clearly involve the transgender person offering more than an opinion that they’re not of the biological sex into which they were born. All of this, of course, comes from the unassailable mantra that “trans women are women” (and the same for men).

47 thoughts on “In a California case, ACLU and co-litigants claim that there are no biological differences between men and women”