The first two responses I had to the title of this article by Princeton anthropologist Agustín Fuentes in Sapiens (an anthropology magazine) were, “No, biological science does not reject the sex binary, but I guess you do”; and “we don’t determine what’s true or false based on what’s good for humanity.” Click to read:

You may remember Agustín Fuentes from a previous dustup in which he wrote an article in Science accusing Darwin (who was an abolitionist) of racism, and then got a lot of responses noting that while Darwin did make statements that would be considered racist, he was remarkably liberal for a man of his position in his time. As I wrote in part of my response:

But, despite Fuentes’ admission of Darwin’s strong abolitionism, he seems to forget that Darwin was a man of his time, not of our time. Is it fair to judge Darwin against an enlightened modern liberal? I don’t think so: the proper judgment is to see whether Darwin was palpably morally worse than most other Victorian Englishmen.  And I don’t think he was. I’ll explain a bit more below, but I have a very hard time thinking of someone of Darwin’s stature in Europe who was much better than he on the issue of women, or, for that matter, slavery. (Read Marx and Engels on the Irish if you want real bigotry.) Yes, Darwin saw some South Americans as “savages”, but he also perceived their common humanity with us, and his theory affirmed our common ancestry. And yes, he saw women as the inferior sex; but how many Victorian men were far more enlightened than he?

Frankly, I’m tired of people who say things like “Darwin was bad because he should have known and done better.” Neither he nor his contemporaries did or could have: morality evolves, and in 150 years our own generation may be seen as just as morally deficient as was Darwin. After all, we eat meat, and in the future we may learn more about the suffering of animals in ways that would brand us moderns as horrible barbarians. The judgment of celebrating Darwin should rest on a). “is he being celebrated for the good things he did?” (answer: yes), and b). “did the good he did in his life outweigh the bad?” (answer: also yes).

I’d wager that Fuentes himself, if he were a white upper-class man in Darwin’s time, would have been more racist than Darwin, though of course that’s mere speculation. At any rate, other people responded critically to Fuentes’ Darwin-dissing, and you can see a selection of critiques at this link.

But Fuentes has moved on to going after other aspects of biology, and in the article above he commits what I see as the cardinal sin of woke scientists who should know better: denying that, in humans at least, sex is a binary. (It also happens to be a binary in most other animals.)  The biological distinction between the sexes, which I’ve written about too many times to count, is this: members of the male sex make small, mobile gametes—sperm.  Members of the female sex make large, immobile gametes—eggs.

This has nothing to do with genitalia or other morphological characteristics. And using that (accepted) definition creates an effective binary in humans: if you can make sperm you’re male, if you can make eggs you’re female. Yes, there are some who are sterile, or who lack testes or ovaries, but those are not members of some “intermediate” sex: they are developmental anomalies, and they’re very rare. (Yes, their existence means that there are a few small blips on a chart of “frequency of sexes” with males at one end and females at the other, but for all practical purposes the plot is a bimodal one, i.e., showing a binary.) And yes, some people are postreproductive and have “outgrown” their ability to produce gametes. But there is no “sex” that doesn’t produce eggs or sperm. There are no individuals that produce intermediate forms of gametes who can be the basis of a third reproductive class of humans.

But for reasons that are purely political, people like Fuentes reject this binary, banging on about hermaphrodites, penises and labia that are not “normal”, hormone levels, fish that change sex, and so on, but let’s face it: in nearly all animals, biological sex, which is the way that “biological science” defines sex.

I really can’t bear to reproduce all Fuentes’s circumlocations and diversionary prose, but here’s a sample that ignores the sperm-egg dichotomy:

Of course, there are clear bodily differences in capacities to give birth and lactate, and ranges of patterns in the development and distribution of body size, strength, and myriad other processes. But such patterns are mostly overlapping, and only a few are distributed in clear or functional dichotomies. Numerous studies have found that the differences between adult men and women are overhyped and largely influenced by the dynamics of biology and culture. Humans are naturenurtural—a fusion of nature and nurture.

And forgive me if I give the slightly censored version of a biology friend’s reaction to that paragraph:

Hahahahahaha
So like EGGS AND SPERM you dumb [redacted].

So why does Fuentes avoid the biological definition (and the resultant binary)? For political reasons, of course. His motivations are good—to reduce bias and bigotry—but you don’t do that by denying the truth.  That both demeans science and is not a good way to dispel bias.

Today a chorus of scientific-sounding claims about “blue and pink” brains, testosterone, and male primate aggression are offered up as natural explanations for masculine and feminine behavior, along with gaps in pay, jobs, political and economic leadership, and sexuality. In the political and legal realms, the belief that biology creates two types of humans is invoked in a range of attempts to mandate and enforce how humans should behave.

These assertions and beliefs are wrong. In addition, the commitment to a simple binary view creates a fictitious template for a “battle of the sexes” that manifests in miseducation about basic biology, the denigration of women’s rights, the justifications of incel and “men’s rights” violence, and the creation of anti-transgender laws.

Science points to a more accurate and hopeful way to understand the biology of sex. By recognizing the true diversity of the human experience, humanity can embrace an expansive and multifaceted way of envisioning and experiencing human nature. This evidence-based outlook is not only far more interesting than the simplistic and incorrect “tallywhacker versus no tallywhacker” perspective, but also more conducive to respect and flourishing.

. . . and his not-even-wrong denial of biological sex:

The data-driven bottom line is that “man/woman” and “masculine/feminine” are neither biological terms nor rooted exclusively in biology. The lack of an explicit binary is especially evident in humans given the complex neurobiologies, life histories, and morphological dynamics in our species. There are many successful, biologically diverse ways to be human, and millions of people embody this diversity. Growing up human means growing up in a world of varying gender expectations, body types, reproductive options, family structures, and sexual orientations.

So, instead of listening to people who are misogynistic, sexist, or homo/transphobic; incels; or politicians who base their ideologies on a biological sex binary and myths about its evolution, we can and should be open to a serious understanding of biology and its better options for human flourishing. The simple male/female binary does not effectively express the normal range of being human. Understanding this and incorporating it into our education, lives, and laws offers better possibilities, greater equity, and more joy for human society.

I must say that I find this kind of “twisting the facts” to be particularly pernicious, especially from those who we expect would know something about biology:

There is an explicit gamete-based binary, which is well defined and, yes, accepted by “biological science”. Fuentes doesn’t like it because he thinks that it creates misogyny, transphobia, and other forms of bigotry. It doesn’t. It’s just a definition that accurately mirrors the situation in Homo sapiens—and most animals. But the truth is the truth, whether or not people like Fuentes likes it. It is bigotry, not science, that creates transphobia and misogyny.

Although Feynman’s famous statement below referred to the Challenger disaster, the last bit might be applied to those who try to deny biological reality in the service of ideology.

For a successful technology, reality must take precedence over public relations, for Nature cannot be fooled.

And for those who like audiovisual, here’s a tweet (suggested by a reader in the comments below):

Sex is a duality, a pair. In other words, a binary.

UPDATE: Reader Bill sent me a comment with a figure he made, but couldn’t embed the figure, so I’m putting both up here as an addendum:

I cannot believe that people continue to claim, Fuentes does, that since characteristics of two groups overlap when examined singularly this necessarily means that the two groups overlap. One has to consider the covariation of the characters. Consider the graph below. The groups are distinct, one might say binary, yet there is considerable overlap in the two characters when considered singularly (project each onto their respective axes). 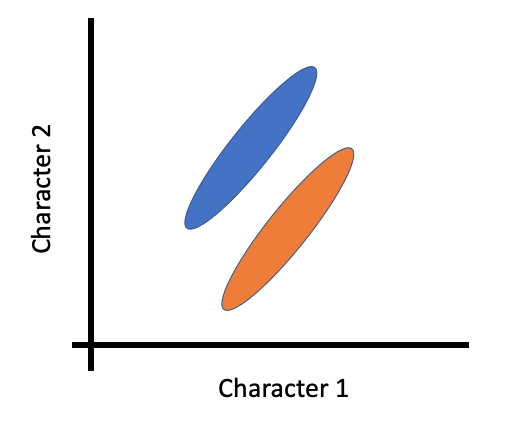