The tweet below from Steve PInker, which is spot on, brought this NYT book review to my attention. Once again, the paper dilates on the supernatural without any warning to the reader that there’s no evidence for the efficacy of “precognition”—being able to see into the future, a form of extra-sensory perception (ESP). Yet the book review implies that there might be something to it.

Yet again the NYT treats the paranormal credulously, failing to indicate clearly that it does not, um, exist. Harnessing ESP to Forestall Death and Disaster https://t.co/WugzOVR5yj

The NYT piece reviews this book (note the title). The account may be true, but the “death foretold”? Fuggedabout it.  (Click to go to Amazon link): 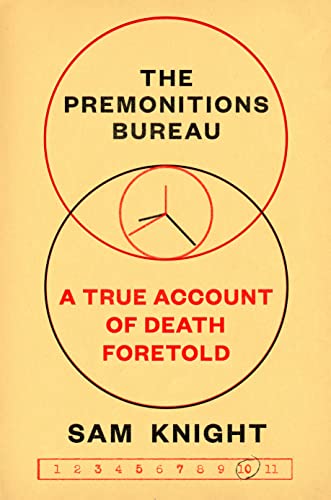 The author of this big of clickbait is W. M. Akers, whose bona fides, as given by the NYT, are “W.M. Akers is the author of “Westside,” “Deadball: Baseball With Dice” and the newsletter “Strange Times.” His most recent novel is “Westside Lights.”

Knight’s book tells the story of a British psychiatrist named John Baker, who was drawn to the supernatural and especially to precognition. He thought that if he could suss out credible instances of people foreseeing disasters, he might be able to prevent those disasters (think of a non-crime version of precogs in “Minority Report”). Here’s one instance of precognition that got Baker’s juices flowing:

n Oct. 21, 1966, Lorna Middleton woke up choking. The sensation passed, leaving behind melancholy and a sense of impending doom. After a lifetime of experiencing premonitions of misery and death, Middleton, a North London piano teacher, recognized the signs. Something hideous was on the way.

A few hours later, workers on a heap of coal waste in South Wales watched with horror as the 111-foot tower of “spoil” collapsed and cascaded down the mountain toward the village of Aberfan — thousands of tons of slurry and rock bearing down on the primary school. It was just past 10 in the morning and the classrooms were full of students doing spelling exercises, singing songs, learning math. When a 30-foot wave of refuse slammed into the building, they were buried alive. One hundred and forty-four people died that day. One hundred and sixteen were children, most between 7 and 10 years old. It was the sort of horror that makes people demand meaning — the sort for which meaning is rarely found.

Now that’s not a very precise example of precognition, is it? In fact, thousands of people probably had bad dreams that night, and where is the coal spoil in Middleton’s nonspecific dream? This seems like nothing more than pure coincidence. And how could precognition work, anyway? This doesn’t appear to be a subject of much interest to Knight—or Akers.

But in fact coincidence is what Baker was trawling for, looking for cases in which real “precogs” could be used in a practical way. If only the exact nature of the disaster could be predicted! Baker got to work, teaming up with Alan Hencher, a postal employee whose migraine headaches were supposed to predict disasters (but of what sort?) and Lorna Middleton, who had the bad dream that was followed by the coal-spoil avalanche::

Barker used his connections at The Evening Standard to solicit premonitions of the disaster. He found 22 he believed credible, including Middleton’s — he believed any vision accompanied by physical symptoms to be particularly strong. On the back of this research, The Standard recruited Barker to create a standing “Premonitions Bureau” that could catalog predictions and check to see how many came true. The Standard brass saw it as an offbeat way to sell papers. Barker considered it his chance to save the world.

“He wanted an instrument that was sensitive enough to capture intimations that were otherwise impossible to detect,” writes Knight. “He envisaged the fully fledged Premonitions Bureau as a ‘central clearinghouse to which the public could always write or telephone should they experience any premonitions, particularly those which they felt were related to future catastrophes.’ Over time, the Premonitions Bureau would become a databank for the nation’s dreams and visions — ‘mass premonitions,’ Barker later called them — and issue alerts based on the visions it received.”

So were any disasters averted? Nope, of course not. What we got is what we expected: there were dozens of premonitions, and  some of them roughly matched something that happened, but most (more than 97%) did not. And even when they didn’t, they stretched the premonitions so they’d be sort-of true:

In the first week of 1967, Barker and the Standard staff began sorting predictions into categories like “Royalty,” “Racing,” Fire” and “Non-specified disasters.” (The science correspondent Peter Fairley often drew on the racing file for betting tips.) Once categorized, they would wait to see what happened, and attempt to connect the tragedies on the news page with the prophecies in their files.

Along with Alan Hencher, a postal employee whose migraines seemed to anticipate disaster, Middleton became Barker’s best source. He greeted her successful predictions with glee. When the death of the astronaut Vladimir Komarov bore out her warning of peril in space, Barker wrote to say, “You were spot on. Well done!” When Bobby Kennedy was assassinated after months of her warning that his life was in danger, Barker called it her best work yet.

But what about Middleton’s unsuccessful predictions—her “worst work”? The review says nothing, except that they fudged the unsuccessful guesses to make them seem more accurate:

If they sometimes had to stretch to make the news fit what Middleton and her fellows dreamed up — letting tornadoes in the Midwest satisfy a prediction of catastrophic weather in California, for instance — Barker saw no problem. He was overjoyed with the success of his star psychics and hoped to scour the country to find more like them. He believed second sight was as common as left-handedness. It didn’t matter that the premonitions were rarely specific enough to be useful, warning simply of a train to derail somewhere, an airliner to crash at some point. Barker believed he was onto something cosmic.

Rarely specific enough to be useful? Why don’t they give us one instance in which a predication was useful, and evidence that the predictions that proved accurate were more common than could be accounted for by coincidence (e.g., was there one person whose precognitions were almost invariably accurate?) If this worked, that person would have won a million bucks from James Randi (nobody ever did). Even according to the author’s count, only 3% of the predictions “came true” (mostly from MIddleton and Hetcher). And that, I’m sure, is stretching it.

The text here gives one no assurance that anything other than coincidence was involved. To make a scientific and definitive statement about the efficacy of precognition, you’d need a rigorous and accurate set of tests, tests incorporating fraud-detectors like James Randi. There are no such tests that have proved successful. The NYT does not mention this.

But wait! There was one “successful” prediction: Middleton and Hencher predicted that Barker would soon die (they give no date) and a year and a half after the “predictions bureau” was founded, Barker had a cerebral hemorrhage and croaked. Is that uncanny, or just coincidence?

The review concludes that the precog experiment was indeed “worth a shot”:

Barker’s psychics’ predictions had proved accurate, but they did not help him avoid his fate. He had hoped to use the Bureau to change the future. It had not even come close. By Knight’s count, only 3 percent of the Bureau’s predictions came true — nearly all of the successes from Middleton and Hencher. It found no useful data and prevented no tragedies. But that doesn’t mean it wasn’t worth a shot.

“We confer meaning as a way to control our existence,” writes Knight. “It makes life livable. The alternative is frightening.”

Three percent is better than nothing. Even false meaning is preferable to fear.

I’m sorry to have to say this, but that conclusion is bullshit.  If “false meaning is preferable to fear”, then we should all become religious. And, anyway, what kind of fear does 3% of coincidental matches dispel? What is the frightening abyss into which we must gaze if none of the predictions were even remotely true? The last two paragraphs are pure New Yorker-style prose: they sound good, but they say nothing.

Some of the evidence for precognition that people found convincing came from Daryl Bem. This evidence has not held up (see also here).  Doesn’t the NYT or its authors owe us that information, or the fact that there is no conceivable way that the laws of physics could even allow precognition?  No, because the paper is are wedded to cosseting our “spiritual” side.

26 thoughts on “Shades of Nostradamus: the NYT touts precognition”