Reader Paul sent me a link a this remarkably clear and short (5½-minute) video showing Fareed Zakaria’s rational analysis of American secularism and political/religious division in the U.S. He begins with a surprising and distressing summary of the gap between the beliefs of Rightists and Leftists on questions such as the importance of being a Christian and the role of religion as essential in society. The gap between Left and Right in America is far higher than that of other European countries. We are a deeply polarized people.

But why? It’s not because we’re less globalized or have more immigration than other countries. Instead, Zakaria draws on the work of Ronald Inglehart, whose work on secularism has often been discussed in these pages. In fact, the U.S., once the most religious of First World countries, has in the last 13 years become markedly more secular—another trend I’ve documented.  Here’s a screenshot showing the change:

That’s good news! Inglehart notes the change to several factors, including the decline of group norms and group mechanisms of control, aas well as the “rise of individualism.” However, this secularization has been accompanied by increased polarization on political issues. (Note that this is a correlation that Zakaria assumes reflects a causation: “big changes are leading to big reactions.” I think he’s right in the main, but he should have issued a brief caveat.)

“All of this highlights a new reality: you cannot really understand America any more by looking at averages. It has become two countries. One is urban, more educated, multiracial, secular, and largely left of center; the other rural, less educated, religious, white, and largely right of center.”

He then calls attention to the well known “Inglehart-Welzel” cultural map that plots countries’ locations on a two-dimensional map of values (religious/secular on one axis/ survival/self-expression values on the other. Wikipedia shows it and says this:

The Inglehart–Welzel cultural map of the world is a scatter plot created by political scientists Ronald Inglehart and Christian Welzel based on the World Values Survey and European Values Survey. It depicts closely linked cultural values that vary between societies in two predominant dimensions: traditional versus secular-rational values on the vertical y-axis and survival versus self-expression values on the horizontal x-axis. Moving upward on this map reflects the shift from traditional values to secular-rational ones and moving rightward reflects the shift from survival values to self-expression values.

According to the authors: “These two dimensions explain more than 70 percent of the cross-national variance in a factor analysis of ten indicators—and each of these dimensions is strongly correlated with scores of other important orientations.”

Here’s that map from 2020 (click to enlarge), showing that the U.S.(I’ve added an arrow) is in the middle on religious values, but high in “self expression”. If it were less religious, it would move up to join the countries of “Protestant Europe”: Sweden, Norway, Denmark, Finland, and the Netherlands.

Zakaria posits that if you divided America into two countries, one red and one blue, the blue part would probably move into the “Protestant Europe” group, while the red one would move closer to those of Nigeria and Saudia Arabia (in the grayishy “African-Islamic” set of values.  His question: “Can these two Americas find a way to work together and cooperate?” (I say “hell, no”.)  And that means, and here Zakaria has it right, a failure to cooperate means that the abortion battle “may be the precursor to even larger struggles.” My guess: yes it will. We’re in trouble. You can argue whether secularization is the ultimate cause (if so, it means that religion has been even more toxic than we think), but you can’t argue about the polarization. 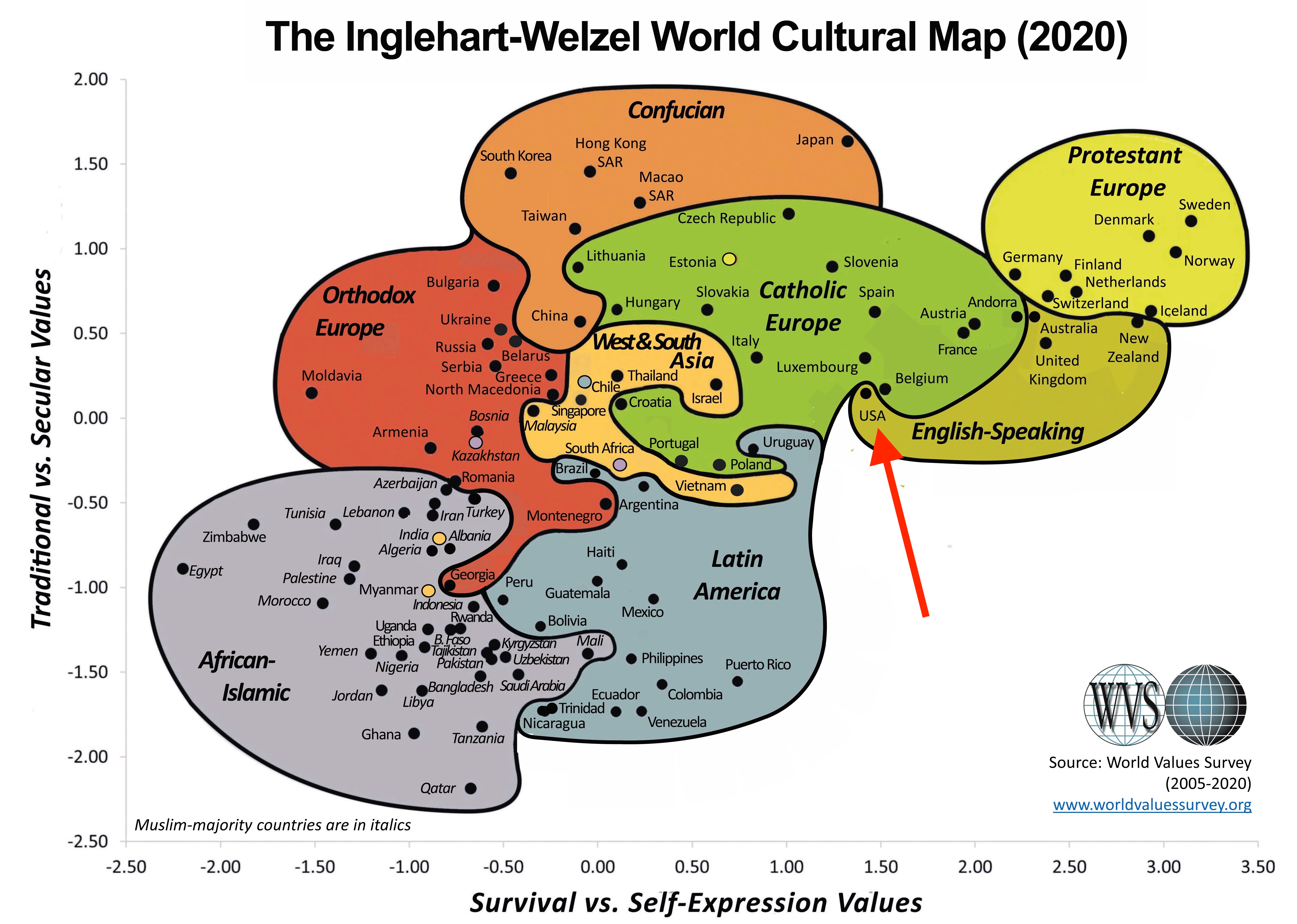 Here’s the video of Zakaria’s take; he’s a remarkably smart cookie for a newsperson. Who else would know all this survey data and put it together into a provocative and coherent thesis?

42 thoughts on “Fareed Zakaria: why is the American public so divided?”