The Harvard Crimson—the University’s student newspaper—came out on April 29 with an editorial supporting the Boycott, Divest, and Sanctions (BDS) movement against Israel and for a “free Palestine.” The screenshot of their article is below, and it’s the usual gemisch of historical ignorance and wokeist victimism.  More important, it completely ignores the perfidy practiced by Palestine, the fact that Palestine and not Israel is an apartheid state, the increasingly violent attacks by Palestinians against Israeli citizens (those are war crimes, by the way), the hatred of Jews and Israel taught to Palestinian citizens and children, and the Palestinians’ odious “pay for slay” program that rewards terrorists and their families for killing Jews.

It also skirts the palpable fact that BDS is anti-Semitic. Why? Because the BDS movement explicitly favors the elimination of Israel. Their mantra is “From the river to the sea, Palestine will be free.” You have to be blind not to see that that is a call for the elimination of Israel and its Jews. If you want a longer list of reasons why BDS is anti-Semitic, go here. (Some of the reasons involve the singling out of the Middle East’s only democratic—and Jewish—state as the only target of BDS.)

But, as in Britain, this happens to be the truth. Increasingly, the American Left is being taken over by the Progressive Left—or at least the Progressive Left that is the vocal face of Leftism; and the Progressive Left adheres to the Victim and Oppression narrative. In this case, Jews are seen as oppressors, and even if not white they are “white adjacent.” As the Crimson editorial states, “It is our categorical imperative to side with and empower the vulnerable and oppressed.”  (But only involving Israel and Palestine.)

The problem is that the Palestinians had many chances NOT to be vulnerable and oppressed (see below) and have rejected them all. Nothing will satisfy them except the total elimination of Israel. And that is anti-Semitic, though its proponents often make it into a euphemism by saying “anti-Zionism is not anti-Semitism.”

Palestinians, on the other hand, are seen as people of color, and despite their repeated refusals to accept a “two state” solution first offered by Britain and then several times by Israel (there have been at least seven such offers, all refused by the Palestinians because they want not a state of their own, but the total destruction of Israel). As Abba Eban said after the failed peace talks of 1973, the Palestinians “”never miss an opportunity to miss an opportunity”.

The first thing you’ll notice about the editorial is how poorly written it is. Can’t editors of the Crimson, who are Harvard students, write better than this?. But let’s have a look at a few of its assertions. (Be aware that I’m quite ill so my writing may be a bit wonky).  I’ve given some quotes (indented) below the screenshot.

We first and foremost wish to extend our sincere support to those who have been and continue to be subject to violence in occupied Palestine, as well as to any and all civilians affected by the region’s bellicosity. We are not sure how these words will reach you, or whether they’ll do so at all. But our stance isn’t rooted in proximity or convenience, but rather in foundational principles we must uphold — even if (or perhaps especially when) it proves difficult.

. . . This editorial board is broadly and proudly supportive of PSC’s mission and activism, including its recent art display. The admittedly controversial panels dare the viewer to contend with well-established, if rarely stated, facts. They direct our eyes towards the property and land confiscations, citizenship denials, movement restrictions, and unlawful killings that victimize Palestinians day in and day out. Art is a potent form of resistance, and we are humbled by our peers’ passion and skill.

No killings are more unlawful that the wanton slaughter of Israelis civilians by Palestinian terrorists. For some reason the Crimson’s editors have forgotten this! And don’t forget the rockets that Palestine fires willy-nilly into Israel, not targeting military objectives but to terrorize civilians. Of course, the slaughter of Israelis citizens has been rationalized as “justifiable response to occupation.”

In the wake of accusations suggesting otherwise, we feel the need to assert that support for Palestinian liberation is not antisemitic. We unambiguously oppose and condemn antisemitism in every and all forms, including those times when it shows up on the fringes of otherwise worthwhile movements. Jewish people — like every people, including Palestinians — deserve nothing but life, peace, and security.

It goes on and on, a one-sided editorial whose message, in the end, is “we favor getting rid of the state of Israel.” If the Crimson wanted a two-state solution, they might have mentioned the number of times that the Palestinians turned one down.

Now nobody denies that the Crimson is a voice of the Left, nor that its editors often go on to obtain powerful positions in journalism. We are doomed to a future in which the Leftist media favor the elimination of the state of Israel. It’s only the center-leftists or centrists who keep our side from going completely down the drain by supporting a patriarchal, homophobic, oppressive, genocidal, and pro-apartheid Arab state.  I am not opposed to criticism of Israel, but I am opposed to BDS, to those who claim BDS is not anti-Semitic, to those who valorize Palestinians as the “victims” of Israeli oppression, to the relentless hatred of Jews perpetuated by Palestinian mainstream and social media, and especially to those on the Left, like these ignorant Crimson editors, who have bought into the Palestinian narrative. (In a week in which three Israeli civilians were axed to death by Palestinian terrorists—before this editorial—do have a look at the Palestinian approbation for the slaughter here.)

UPDATE: I deliberately avoided reading Dara Horn’s piece on the Crimson editorial (it’s at Bari Weiss’s site) until I wrote my own take above. Horn’s deals largely with the propaganda posters erected in Harvard Yard by Harvard’s Palestine Solidarity Committee—posters that, she says, are “[propaganda murals] that would have been at home in any Middle Eastern authoritarian state, where it would have been painted by government lackeys to illustrate classic regime talking points that openly genocidal groups like Hamas, Hezbollah and their state sponsors in Iran have been pushing to local and Western audiences for years.”

And a couple of Horn’s quotes on BDS and campus Jew hatred:

The BDS movement, as it’s known, is old news on college campuses and elsewhere; it’s been around long enough that it no longer bothers to hide its goal of eliminating the world’s only Jewish state. But I had to hand it to The Crimson for timing, given that the editorial followed several weeks of terror attacks in Israel during which 15 people were stabbed, shot and car-rammed to death while engaging in such provocative behaviors as drinking at a bar or walking down the street. One victim was an Arab Israeli police officer rushing to the crime scene. Even Palestinian Authority president Mahmoud Abbas, not known for his Zionism, condemned these attacks. Two of the attackers were apparently connected with Islamic State, a medieval-cosplay sex-slavery outfit whose genocidal goals are entirely unrelated to Palestinian national aspirations. Why after these events, one might ask, would these Harvard students change their position now?

It was apparently the propaganda exhibit in Harvard Yard. Horn gives several photos of the exhibit; here’s one: 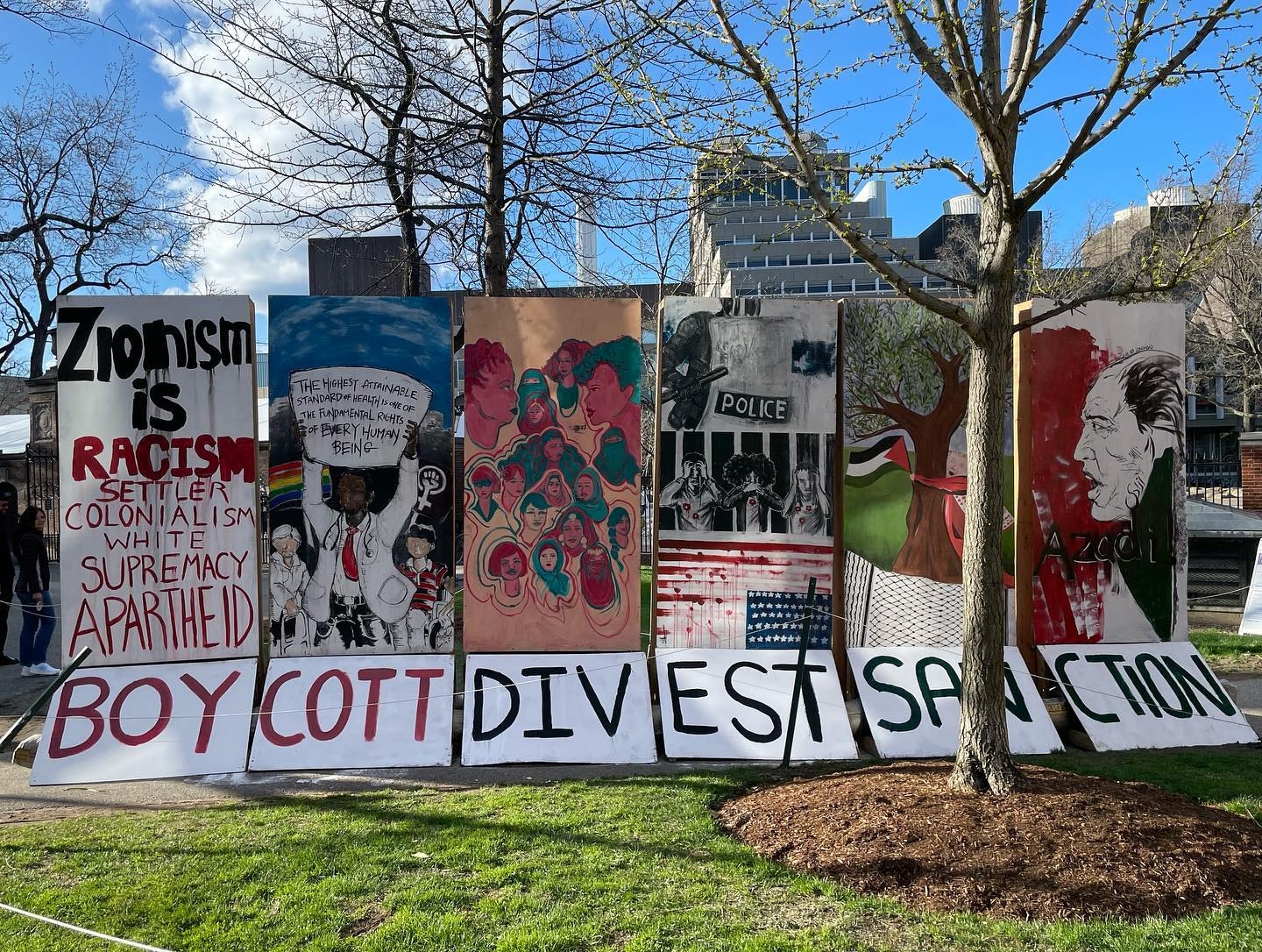 And a few more campus episodes:

Last month on Yom Hashoah, the Jewish community’s Holocaust Remembrance Day, the brothers of the Jewish fraternity AEPi were engaged in their annual tradition of reading the names of Holocaust victims when their reading was interrupted by the thumps of eggs hitting their house. Throwing eggs at the fraternity during this commemoration is also now an annual tradition, since it also happened on Yom Hashoah last year. Credit to the egg-throwers: When it comes to Holocaust Remembrance Day, they never forget.

Spitting at Jews is a newer Rutgers tradition, inaugurated just last week, when people leaving a rally at Rutgers advertised as “Defend Al-Aksa, Defend Palestine” made a detour in their car to stop by AEPi in order to shout and spit at the brothers, calling them “baby killers.” This phrase, also known as the blood libel, is “admittedly controversial,” to borrow the Crimson’s wording about the mural. But what bold idea isn’t?

There are more, but I’ll stop here. Those who deny that American elite campuses are pervaded by anti-Semitism are either blind and deaf, or ignorant.