Tenerife is one of the seven large Canary Islands, all of which are volcanic in origin and thus formed with no life on them. They are what we biologists call oceanic islands, whose origin means that indigenous species must have derived from ancestors introduced by birds (poop contains seeds), wind, or organisms floating at sea. Such islands are usually rich in indigenous insects, plants, and birds, all of which can get to the island and form new species. Such islands have almost no indigenous amphibians, reptiles, mammals, or freshwater fish, though they can be introduced by humans. (Read the biogeography chapter in Why Evolution is True.)

We have some indigenous plants below, but also many introduced plants that grow like gangbusters here, for the climate is wet, salubrious, and not too hot. I’ll show some of the plants I photographed in the lovely Botanical Garden in Puerto de la Cruz, the second oldest botanical garden in Spain. I didn’t take notes, and can’t identify many of these, but I hope readers can.

First, the volcanic origin of Tenerife. Looming over the island is Mount Teide, a big volcano. It stands at 3,715 m or  12,188 feet. Here’s what Wikipedia has to say about it:

If measured from the ocean floor, its height of 7,500 m (24,600 ft) makes Teide the third-highest volcano in the world, and is described by UNESCO and NASA as Earth’s third-tallest volcanic structure.[8][9][b] However, as Teide was formed just 170,000 years ago due to volcanic activity following a catastrophic landslide, Teide’s base is actually situated in the Las Cañadas crater (the remains of an older, eroded, extinct volcano) at a height of around 2,190 m (7,190 ft) above sea level. Teide’s elevation above sea level makes Tenerife the tenth highest island in the world. Teide is an active volcano: its most recent eruption occurred in 1909 from the El Chinyero vent on the northwestern Santiago rift. The United Nations Committee for Disaster Mitigation designated Teide a Decade Volcano because of its history of destructive eruptions and its proximity to several large towns, of which the closest are Garachico, Icod de los Vinos and Puerto de la Cruz. Teide, Pico Viejo and Montaña Blanca form the Central Volcanic Complex of Tenerife.

A view from near Puerto Cruz; 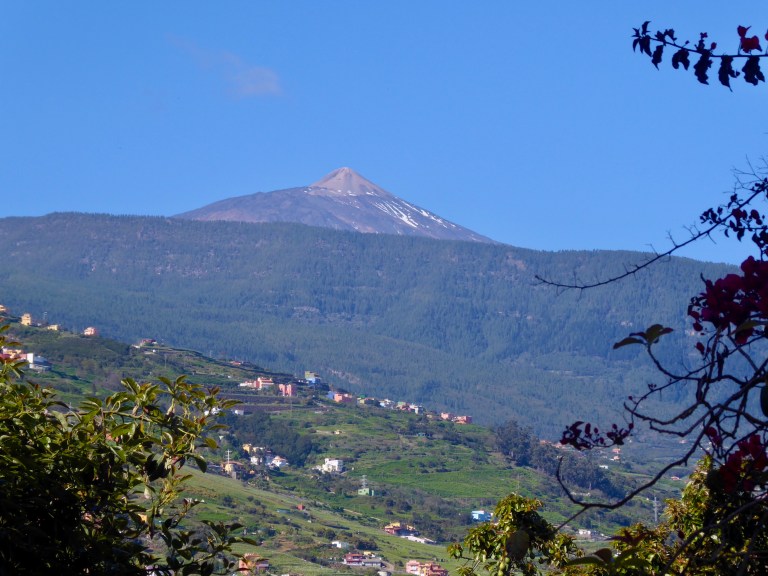 Puerto de la Cruz, where we stayed the first night at the Hotal Botanico, which is right by the gardens: 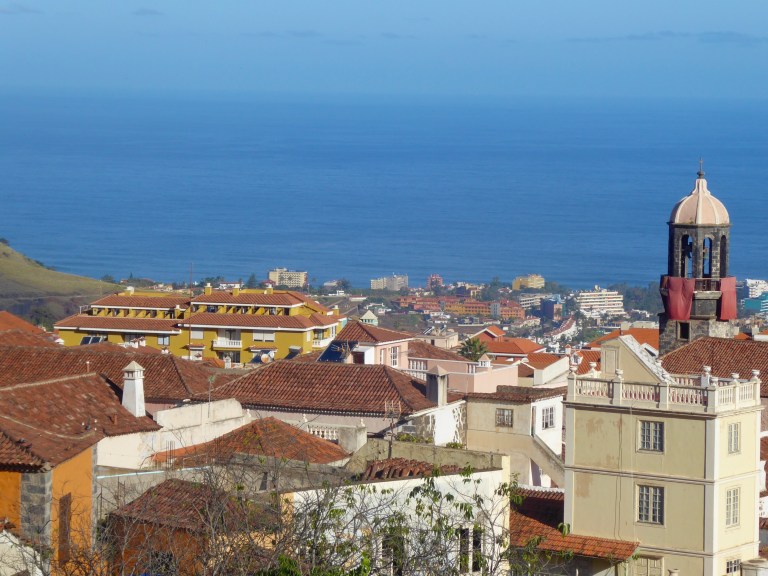 And plants. First, the famous Canary Islands “dragon tree“, Dracaena draco, endemic to the archipelago and other nearby areas. I didn’t know of it, but it’s plenty weird. From Wikipedia:

. . . a subtropical tree in the genus Dracaena, native to the Canary Islands, Cape Verde, Madeira, western Morocco, and is thought to be introduced in the Azores.Its closest living relative is the dragon blood tree of Socotra, Dracaena cinnabari.

It was first described by Carl Linnaeus in 1762 as Asparagus draco. In 1767 he assigned it to the new genus, Dracaena. 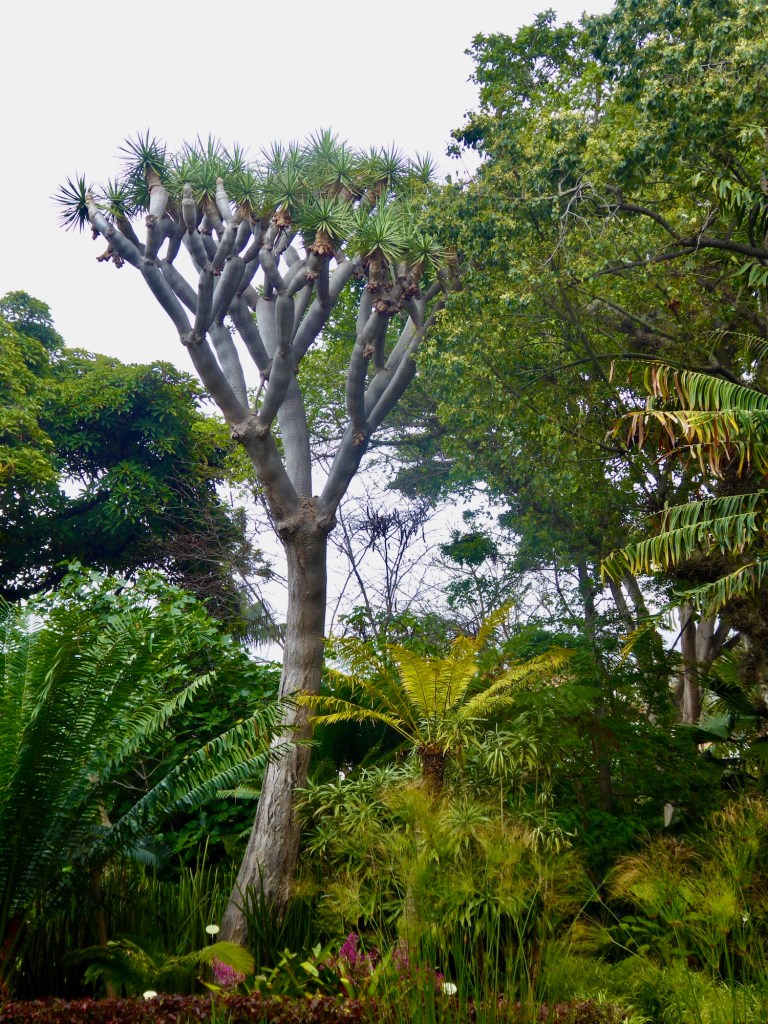 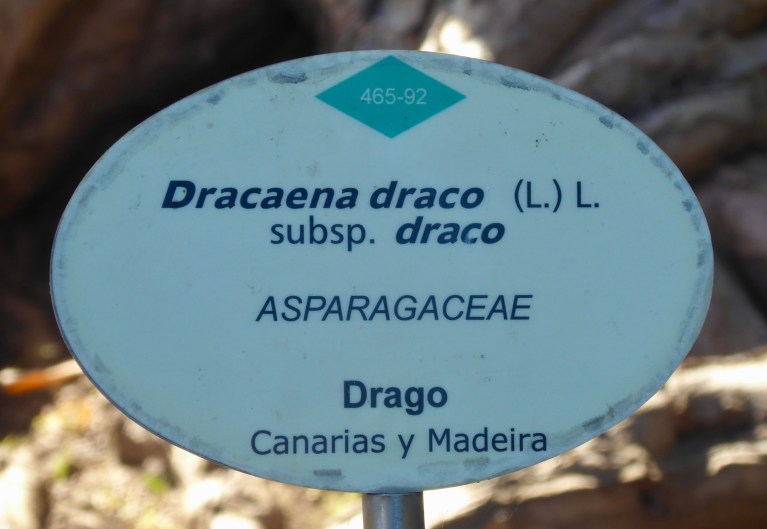 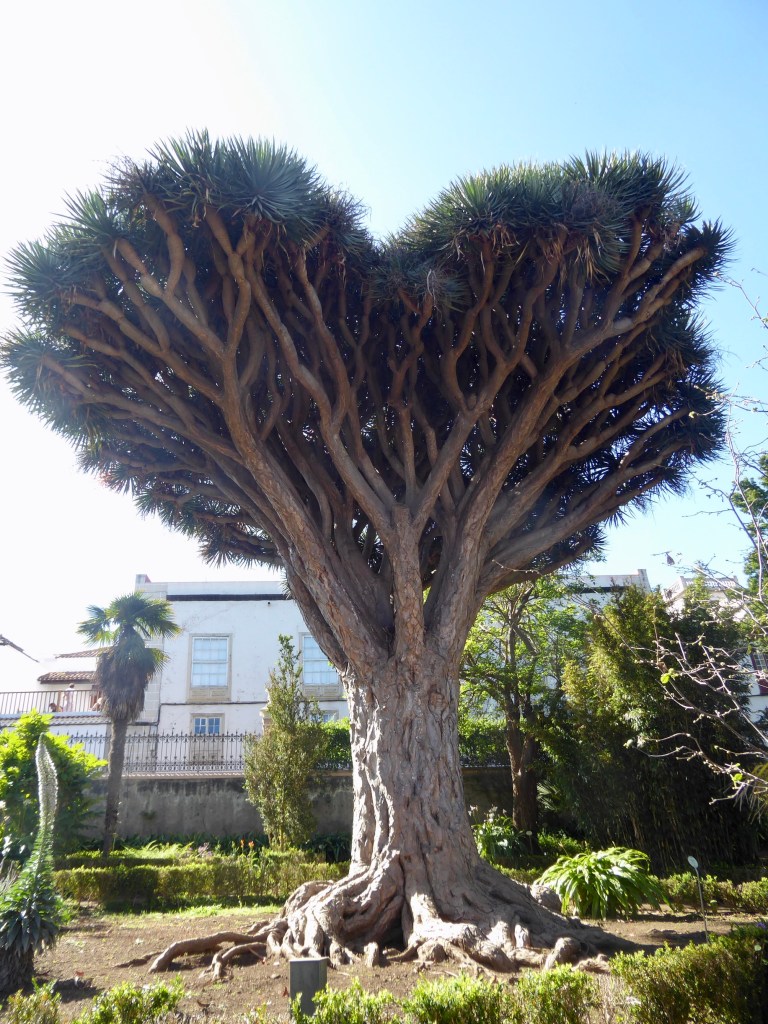 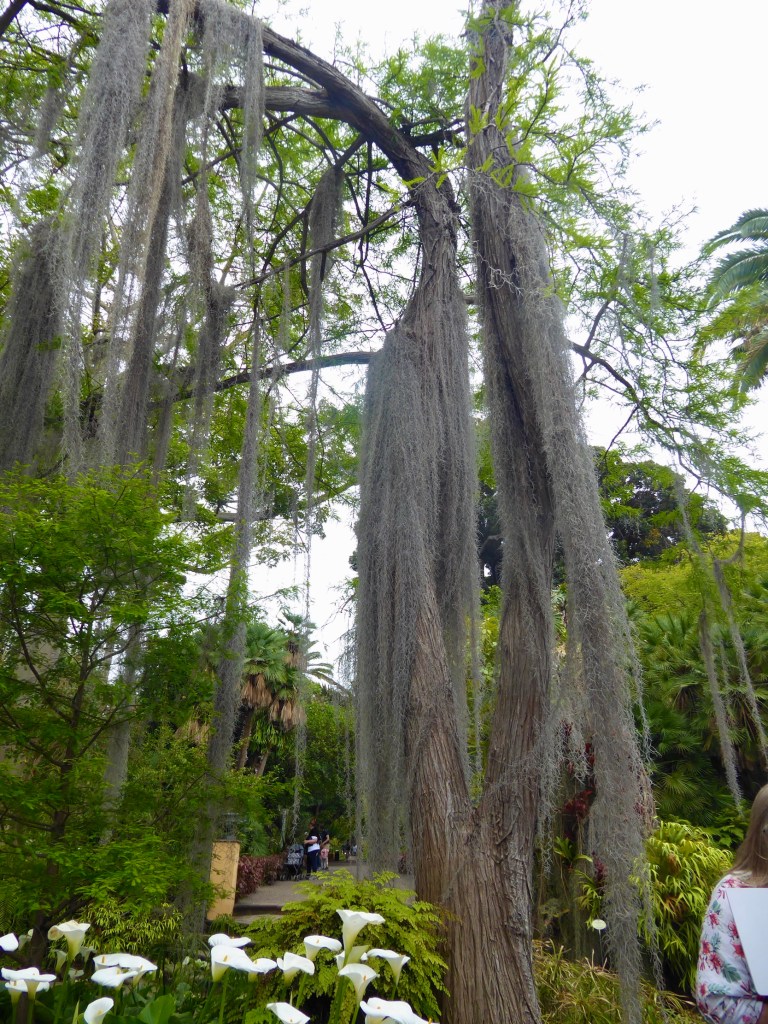 I’m not sure what this is, but the locals make maracas out of it. Pick the gourd, poke a hole in one end to dry it, and then after a while, when it’s dry, you can shake it and use it as a maraca since the seeds rattle around inside. 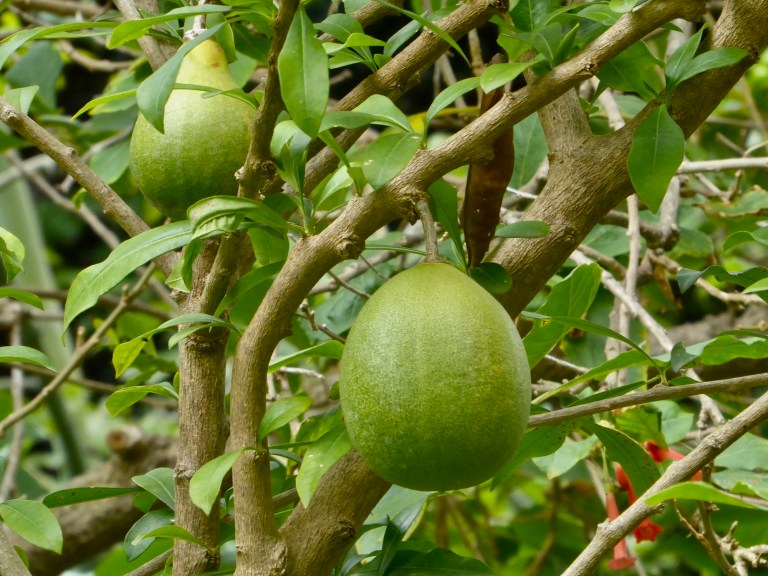 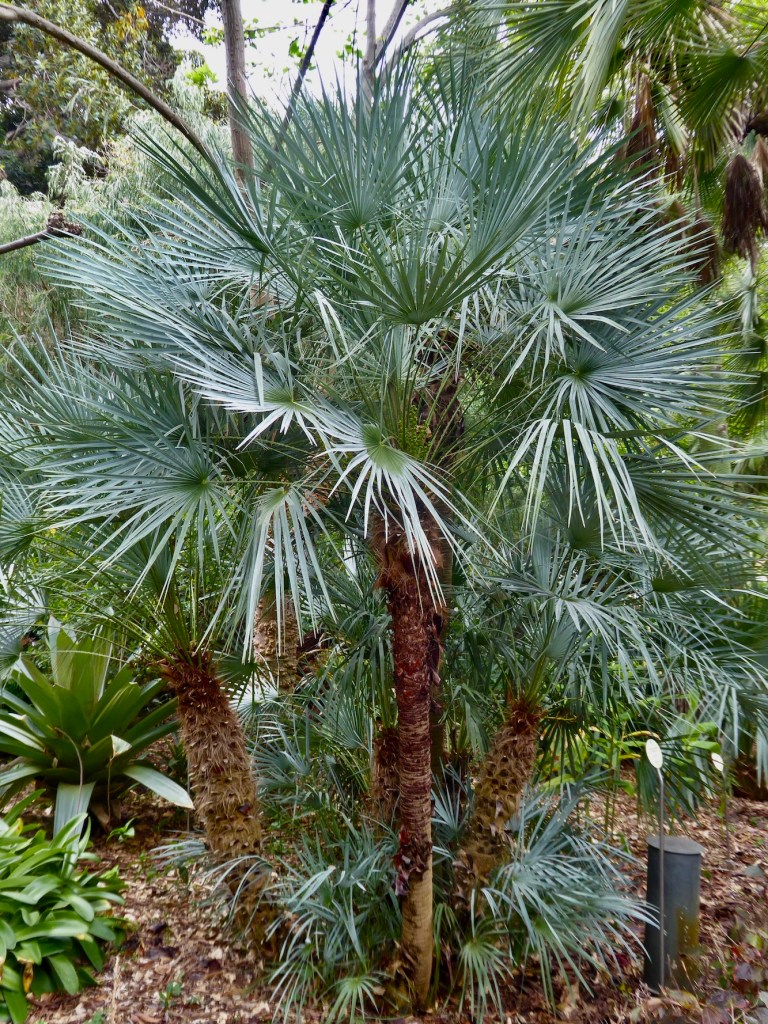 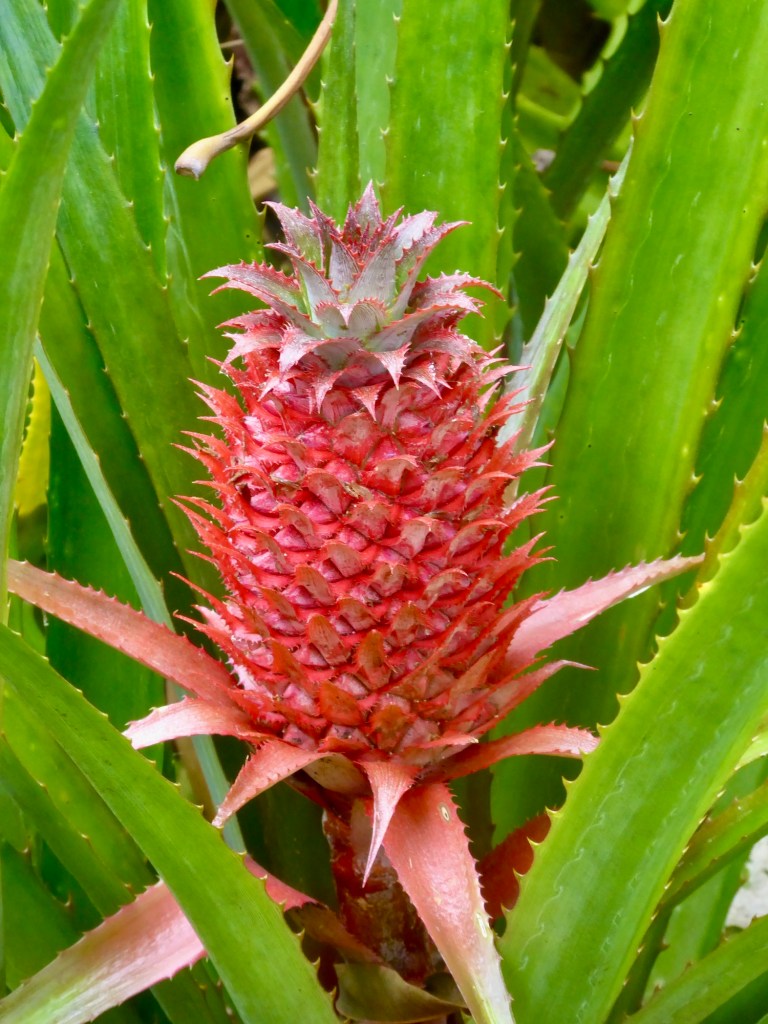 This is some kind of weird epiphyte, and I have no idea what it is. I hope a reader can identify it: 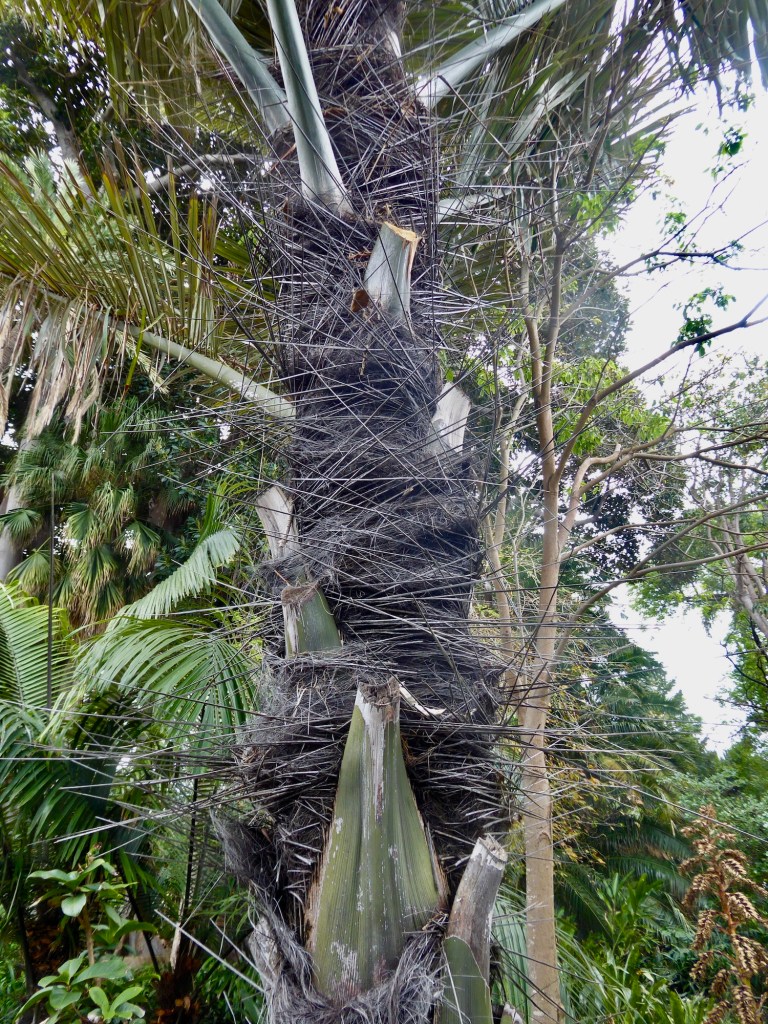 The flower of a bromeliad: 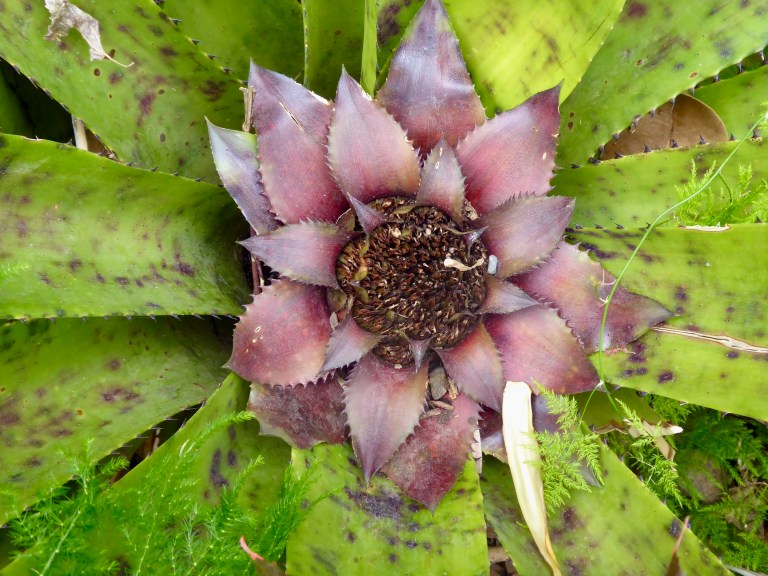 Below is a strangler fig, Ficus macrophylla, which was represented to us as endemic to Lord Howe, a remote oceanic island between New Caledonia, Australia, and New Zealand, but it’s found other places as well, notably Australia, where the Lord Howe ancestor undoubtedly came from. I don’t see that this tree from Lord Howe, which has a high proportion of endemic species, is given subspecies status. 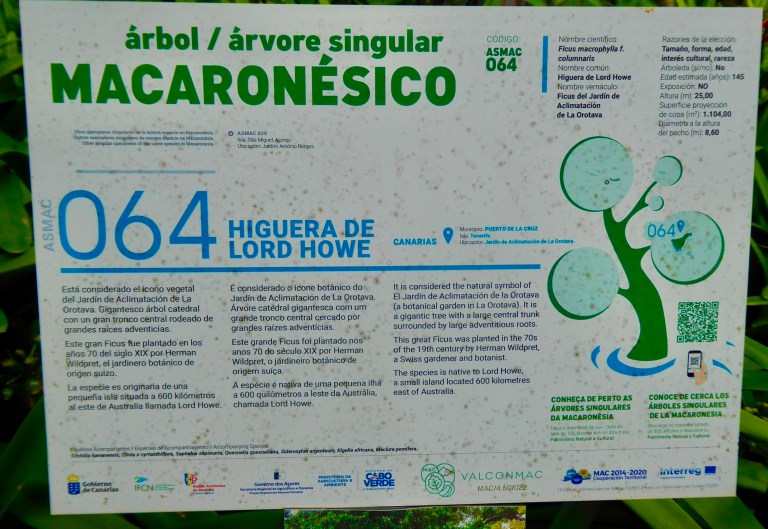 But it’s one impressive strangler fig–a killer tree! Look at those roots! 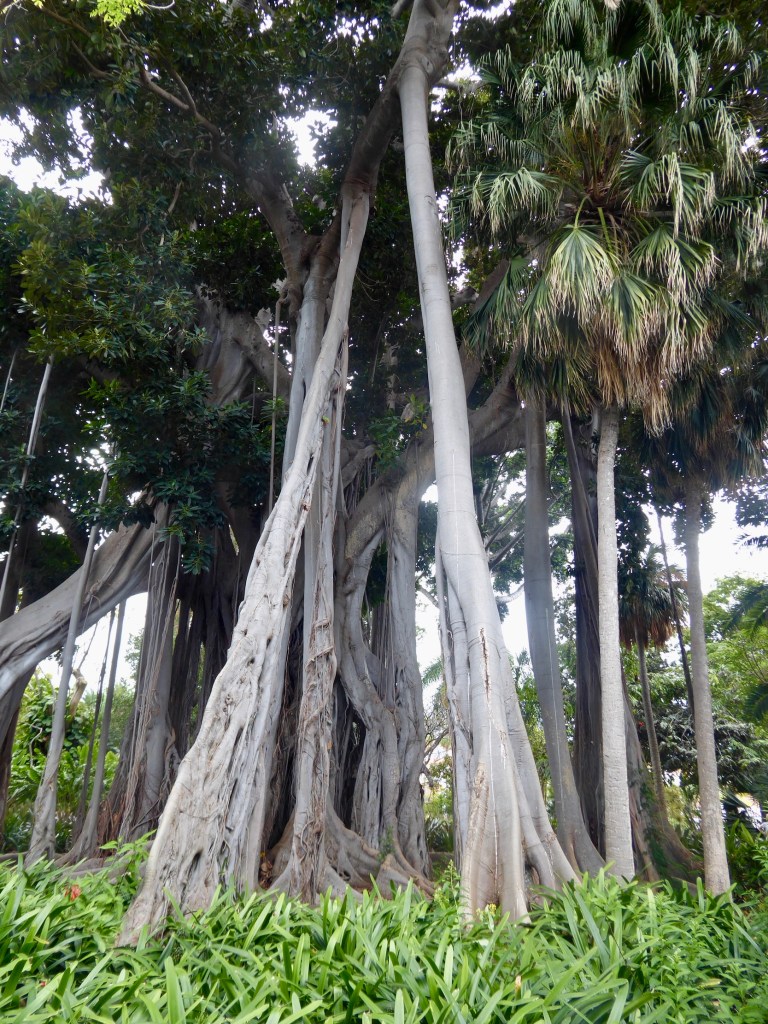 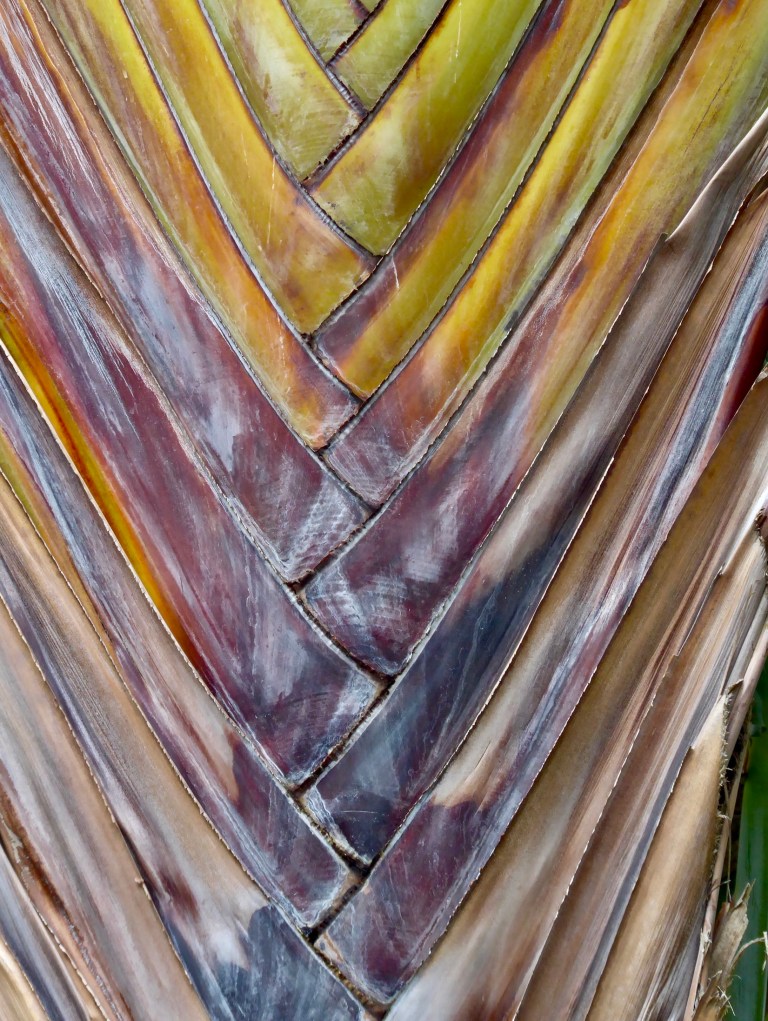 Common blackbird (Turdus merula) singing in the cool of day. I think this is the first one I’ve ever heard, and oh, what a lovely song! 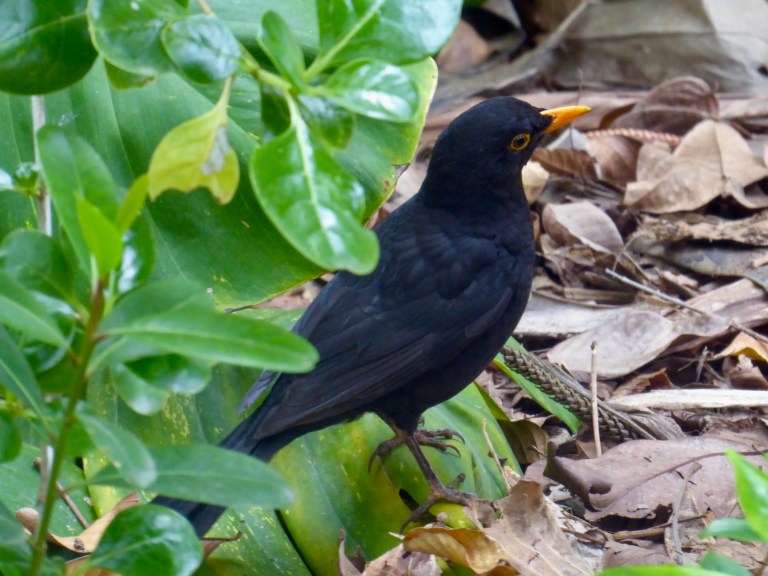 I have no idea what this is, but it isn’t endemic: 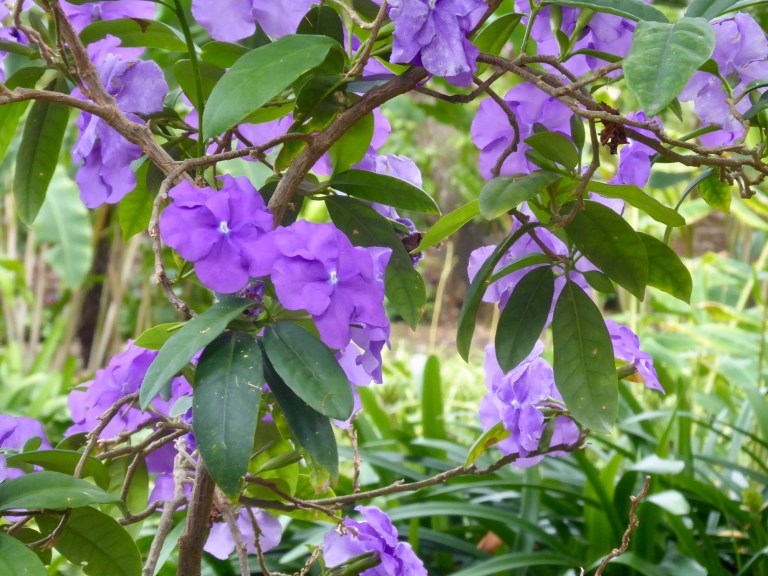 A “conch flower”, because it resembles a cowrie. You tell me what it is! 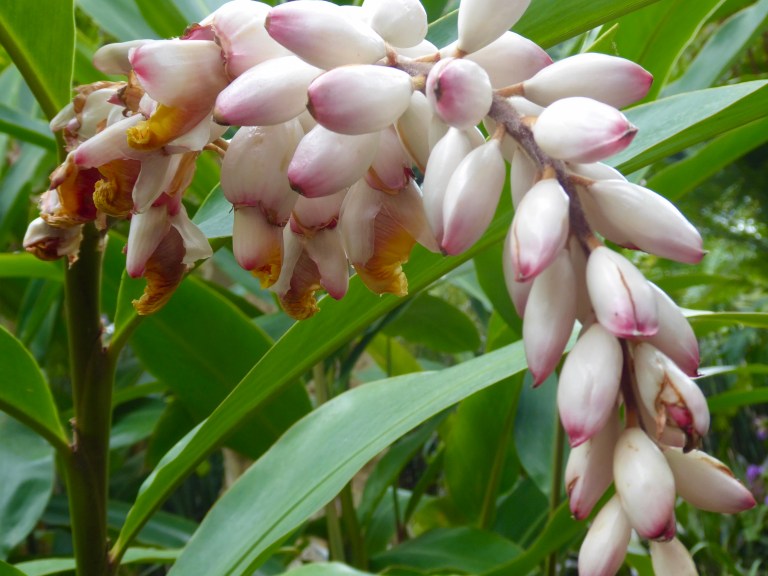 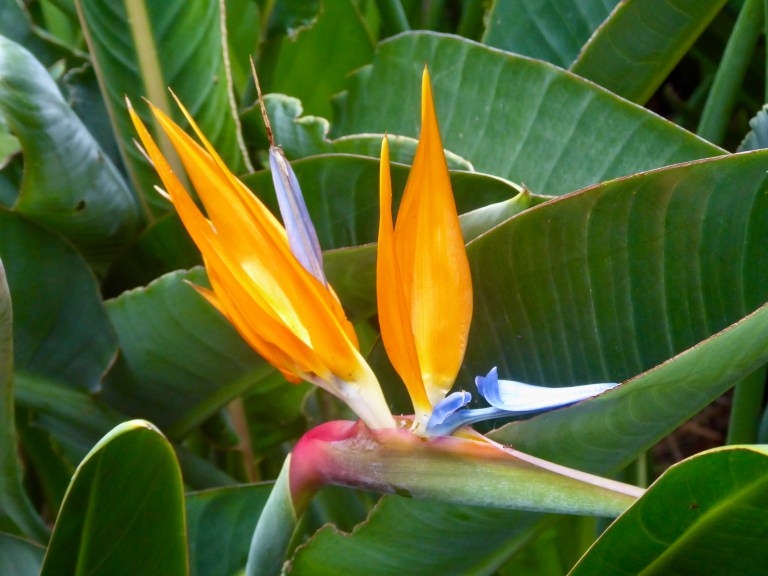 This looks like a species of Datura, all of them poisonous (“jimson weed” in the U.S.) Lovely flowers, but don’t eat them or the seeds! 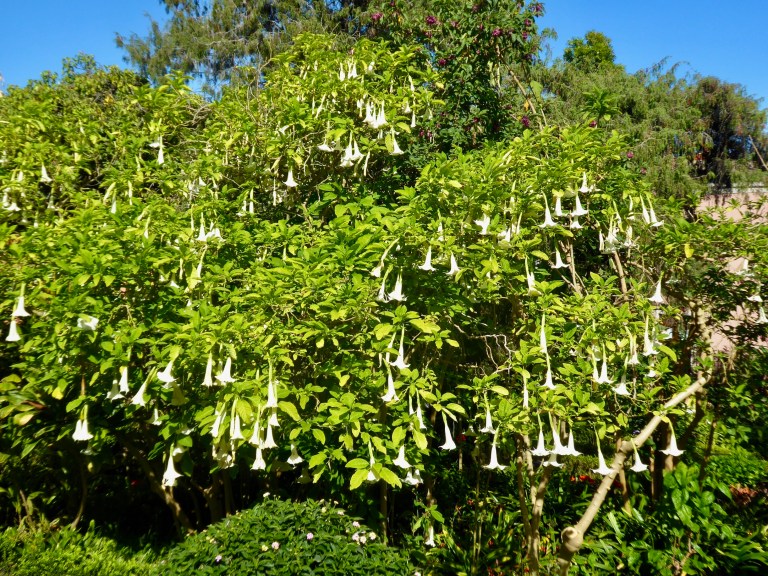 I’m not sure what this flower is, but it was gorgeous. 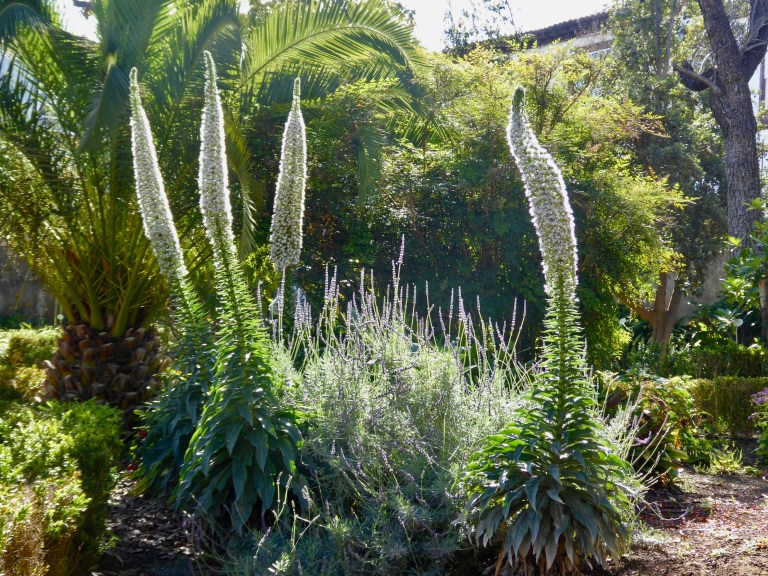 . . . and especially gorgeous when backlit: 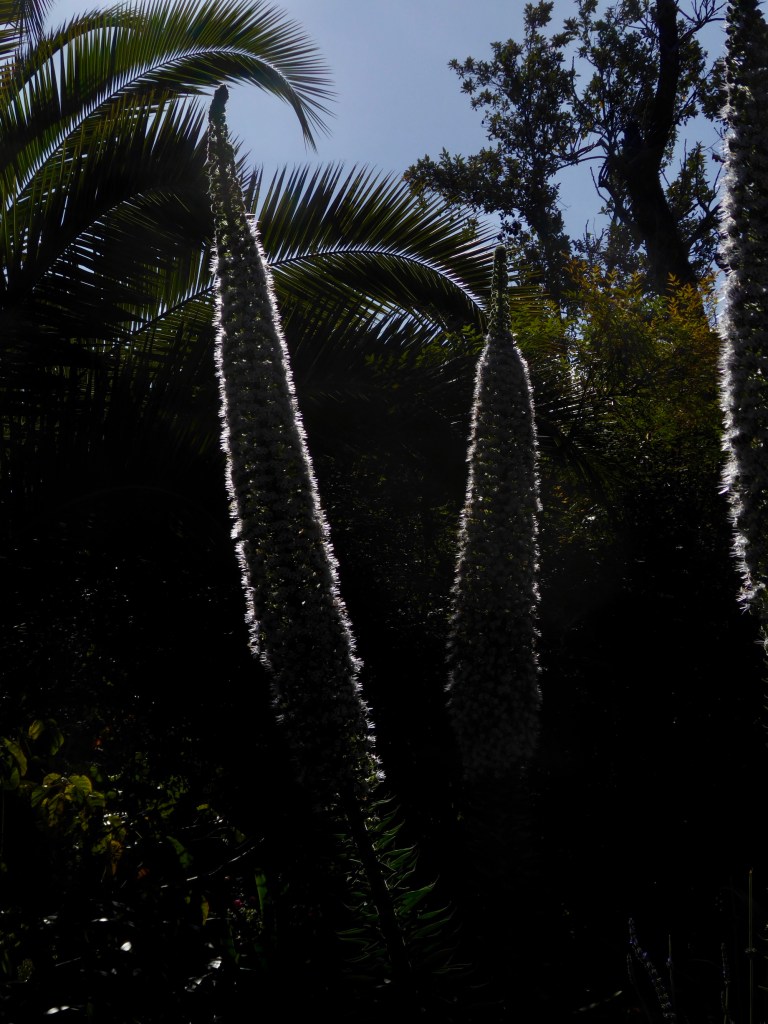 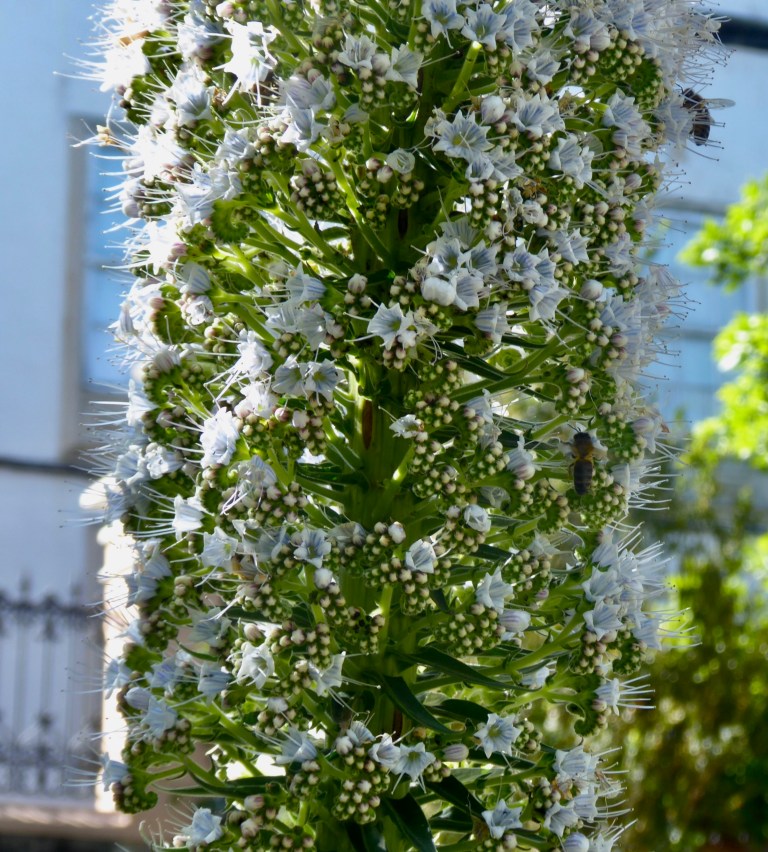 And my obligatory “art shot’: water in a fountain: 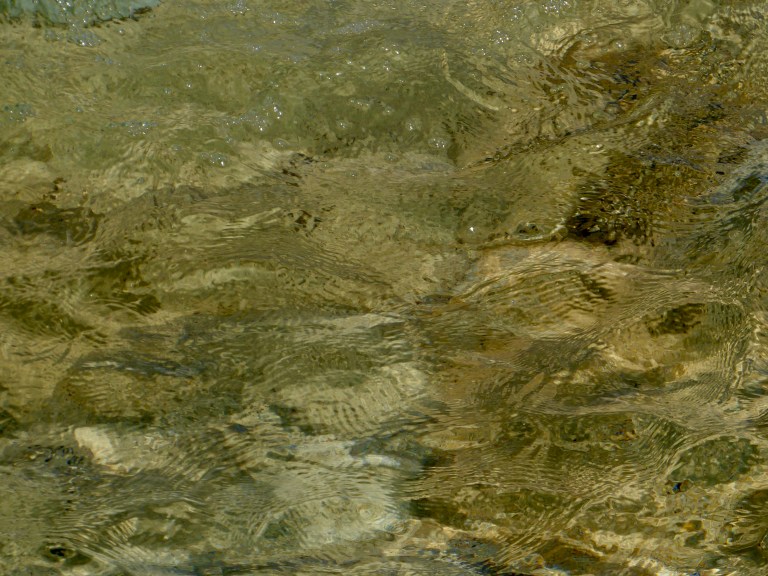 More soon, but I have to steal time from sightseeing to post. Today I saw enough sights and left the tour a couple of hours early to wash up, do laundry, and post these photos.

60 thoughts on “Vegetation in Tenerife”