Here’s an exchange I had with a reader in the comments section of my recent post, “Curmudgeon sees John Lennon’s ‘Imagine’ as a harmful song.” I was surprised that there were nearly 100 comments on what I thought was a pretty uncontroversial post. But one never knows what can get readers worked up: 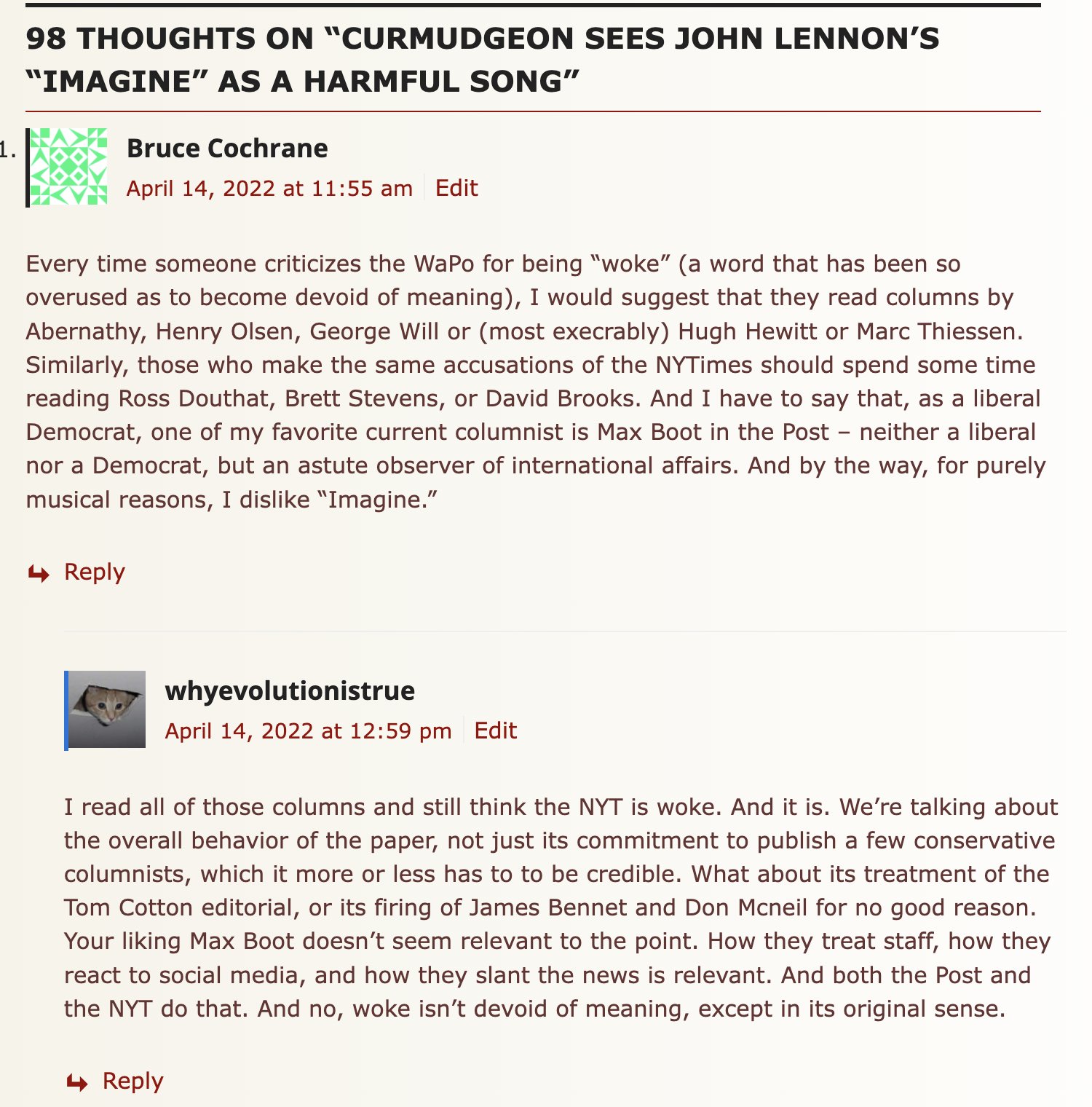 I stand by my reply: any paper aspiring to credibility has to give more than one political viewpoint in its op-eds (granted, the Wall Street Journal is close to just one), and a few conservative columnists in the NYT does not make for an objective, much less an un-Woke, newspaper. What makes me accuse the NYT of wokeism is the way it slants its news reporting, letting a “progressive” liberal ideology seep into the news itself. Its coverage of the Israel/Palestine conflict, with a clear bias towards Palestine, is one example. What happened to Bennet and McNeil are two others.

And yet another (or rather, several) is mentioned by Andrew Sullivan in the second part of Friday’s Substack column: “The NYT’s deliberate disinformation“. This refers to the tendency of the NYT to downplay race when a criminal proves to be black, but to emphasize race when the criminal is white and the victim black or a “person of color”—especially if the paper can find a “racist” or “white supremacy” angle. This is so clear in the NYT that I need hardly point it out. The reason, of course, is to indict whites for racism but avoid indicting blacks for racism—a clear double standard, but one reflected in the Woke definition of racism as “prejudice plus power.”

Sullivan’s main example is the recent subway shooting, with ten victims, by a black man who was apparently motivated by hatred of white people. (He also appears to be mentally ill.)  The NYT didn’t mention that the suspect was black until it had written twenty-one news items about the killing, and even tried to twist the suspect’s words to make it seem that he was a white supremacist.

A mass shooting earlier this week was the worst incident on the New York City subway system in 40 years. The man who committed the attack has an extraordinary voluminous record online of his views, which add critical context to his motivations. And if you wanted to know what those views were, the one place you would be unable to find it was the New York Times. In fact, you found out far more about this NYC terror attack in the pages of London newspapers.

Why? The answer, it seems to me, is simple. Frank James is black. And the NYT treats crime very, very differently depending on the race of the suspect. If a white man had perpetrated this act of terror, and had online rantings about how much he hated blacks, we would be in Day Four of analysis of how white supremacist hatred fuels violence. Imagine if a white man had been yelling the following racial expletives in the streets before shooting up a subway station: “Fuck you and your black ass too, you black racist motherfucker” “Slant-eyed fucking piece of shit.” “You’re a crime against fucking nature, you Spanish speaking motherfucker.” But James said exactly that — if you replace the word “black” with “white” in the first quote.

James is obviously mentally unwell. But what’s notable about him is that this derangement is fused with black nationalism and separatism, and hatred of whites. His vicious insults against black people are because they refuse to see the genocidal motives of white people. . . [JAC: Sullivan goes on to give examples of James’s racism.]

But here’s the kicker: the NYT kept all of this from you. They excised the black nationalist background, and made it seem as if his railing against his fellow blacks proved he was not driven by 1619 ideology, and was just an equal opportunity hater. In the body of their reporting, it took two full days — after at least 21 news items comprising more than 14,000 words — to note in writing that the dude is African-American at all. Here’s the line they finally coughed up to summarize all this context:

The videos he posted frequently devolved into outbursts of homophobia, misogyny and offensive comments about Black people, Hispanic people and white people. Mr. James, who is Black, directed much of his hatred toward Black people, whom he often blamed for the way they were treated in the United States.

Notice how they manage to invert his actual ideology. They make him seem like a white nationalist! They first highlight his homophobia and misogyny (they are minor themes in the record), and never call him a racist. (Even CNN, NBC News, and MSNBC called the rhetoric “racist.”)

Now remember how the NYT covered the Atlanta shootings. There they invented a narrative of white supremacist anti-Asian hatred out of thin air — when there was nothing anywhere in the record to suggest it — and posted nine separate stories framed around that hate-crime narrative. This week, they bury reams of readily available evidence that the shooter was largely motivated by anti-white hatred, and had absorbed the prevailing CRT narrative. And still not a single op-ed or editorial on the terror attack, despite multiple opinion pieces in each of the NYC dailies. NYT: All the news that comports with CRT! Everything else buried deep.

Are these kinds of crime rare, as Nikole Hannah-Jones insisted this week? Of the 218 arrests for hate crimes in New York City last year, 103 were of African-Americans — 47 percent, compared with 24 percent of New York’s population. I wonder if James will be prosecuted as such. Or if “hate” only counts for some races and not others.

As far as I know, nobody (including the police) has yet turned up any evidence that the Atlanta “spa shootings,” in which Robert Long killed eight people, six of them Asian women, was a hate crime targeting Asians or motivated by Long’s hatred of Asians. The motivation seems to be Long’s cognitive dissonance between his Christianity and his “sex addiction” to frequenting massage parlors, in which customers would be sexually serviced by Asian women. He was not charged with a “hate crime” when he was given life without parole.  And yet despite the existence of no anti-Asian bias, people brought it up anyway, so eager are they to find evidence of race hatred. Even Wikipedia says this after dispelling a racist motive for the killings:

Some noted the ethnicity of six of the victims, who were Asian women, amidst an increase in anti-Asian hate crimes in the United States during the COVID-19 pandemic, or characterized the shooting as a hate crime. Some experts have said that race cannot be ruled out as a motive because of the fetishization of Asian women in the U.S. Long said that his actions were not racially motivated.

“Some noted” indeed! People “note” all kinds of unsubstantiated things.  And of course we can’t completely “rule out” the existence of the Loch Ness monster, despite concerted and fruitless attempts to find it.

What we see here is the desperation of some to paint a racist victim narrative. Now it may be true that Long’s act sparked other anti-Asian attacks that were motivated by racism, but that’s not the issue. The issue is what motivated Long himself, and the NYT did all it could to paint this as a hate crime. Indeed, one could conclude that the NYT itself was responsible for a wave of anti-Asian hate crime by painting Long’s attack as one example. The existence of “copycat crimes” is well known.

Why did the NYT slant the news in both cases? Because it’s woke. It has bought into the victim narrative inherent in Wokeism combined with the view that minorities can’t really be racist or commit racist hate crimes because “racism equals prejudice plus power.” Under that mantra, members of racial minorities simply can’t be racist.

No rational person would buy that claim. Anybody who hates people simply because of their ethnicity is a racist. The “power” bit is an add-on to excuse minorities from being racist. The NYT’s valorization of minorities is also seen in the fact that its news section capitalizes “Black” but not “white” when referring to race, and the paperhas offered the lamest of excuses (see also here and here) for this disparity. (The Washington Post capitalizes both.)

If a paper is objective, it does not paint a racial narrative when there is no evidence for one, as in the Asian spa murders. And it does not downplay a racial narrative when there is one, as in the NYT subway killings. If you engage in this kind of doublethink, you are simply causing more racial division—as well as misleading readers by obscuring the truth.

This kind of narrative goes against any vision of treating members of different groups the same way. An objective newspaper wouldn’t do what the Times did. And it does this over and over again (as do other media). There is no credible explanation beside Wokeness.

And I hate myself for doling out $4 a month to subscribe to this paper. But the fact is that it remains the best liberal paper in the U.S., and I’m a liberal. But the Wokeness repeatedly irritates me, as you can see from reading this website.

33 thoughts on “Yes, Virginia, the New York Times is woke”