Today’s Caturday will be short and sweet as I’m busy packing and taking care of last-minute business.

First, from BoingBoing we have a blurb for an animated movie you might want to see. Click on screenshot:

I’ve read two volumes of the graphic novel by Joan Star (there are 11), and thought it was great; but I haven’t seen the animated film.  Since the animation was made in 2011, I’m not sure why it’s being highlighted only now, but who cares? The film is highly rated, getting a 94% critic’s review score on Rotten Tomatoes.

Outside of the Japanese, the French have to be my favorite nationality when it comes to animators. I don’t think anyone can touch the beauty of fluidity of French animation. The film that acted as my sherpa through the lush expanse of French cartoons was The Rabbi’s Cat.

Based on Joann Sfar’s comic of the same name, The Rabbi’s Cat is a stunning work of magical realism with an incomparable visual style. As the title would indicate, the film’s protagonist is the house cat of a rabbi that gains the power of speech after devouring a parrot. Armed with his new silver tongue, the cat begins courting his owner’s daughter—who he mistakingly believes is his mistress—and plunges the family and the entire town into chaos.

The film is a rollicking romp that delves into religion’s place in modernity, war, racism, and how to compartmentalize grief – all through the eyes of an atheist cat that wants to become Jewish to marry a human. You gotta love the French, man.

Indeed! You can’t say that this is simply an adventure/chase film!

There’s a trailer for the English-language release, below, but I haven’t even seen this as there’s no streaming video aboard the ship. But I’ve inserted the link so you can see it:

Readers have recently put me on to Freddie deBoar and his eponymous Substack site, and I like a lot of the stuff he writes.  Yesterday he published a paean to his still-living cat, Suavecito, who just turned ten. “Suavecito” is a brand of hair pomade, but also a popular Cuban song written in 1929; the name means “soft” or “smooth”. (deBoer doesn’t explain the cat’s name, but it’s a good one.) 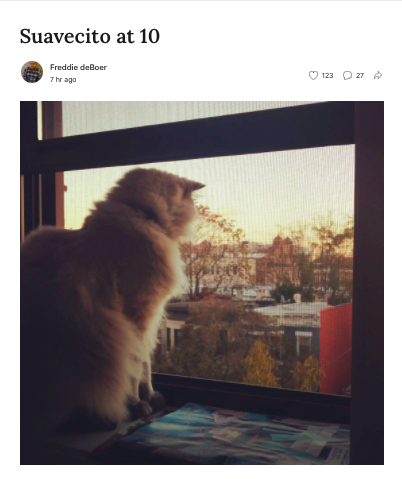 The paean is a single sentence with no capital letters, and refers to a future apocalyptic time when all humans are gone but animals remain and rule. It’s also somewhat of a lament for death in general as Suavecito ages.

Here’s one excerpt. deBoer certainly loves his cat—as all staff should!:

in this next world the great stone canyons of Manhattan will sit indifferent to the demise of the species that built them, providing shade for lazy dogs that pack together in vast hordes, chewing their fleas, and deer will come to crowd the tombs that once housed subways, and rare eagles that used to live only above the Nordic fjords will come to nest among the gargoyles of the Chrysler building, and a mother bear will teach her cubs to fish in Prospect Park Lake, and the five boroughs will become a realm of myth and prophecy, and rising above all the other beings that hunt and claim land in this vast land will be, my Lord, you! you will be legend! you will move confidently and unthreatened across a teeming landscape of wise and untroubled creatures, most regal of all, and though no humans will remain to make statues of you, the whole vast sweep of the plains across which you unhurriedly journey will be the only memorial you need

and so today, April 1st, I cradle you while I can, knowing that my people’s time grows short, while ahead of you lies prehistoric plains that will grow like pinnacled corn from the human ossuary, and you will be lord and master of a vast kingdom that flourishes beneath your radiant example, and I say happy birthday, you are my friend, I know that you will never die

Here’s another cat film, this time touted by the Good News Network, not a place to read about Jesus but to absorb feel-good stories). Click on the link to read about how manly men love cats:

The film is called Cat Daddies, has just been released, and is about eight “unique” men who are hopelessly devoted to their moggies:

The idea arose after director Mye Hoang noticed a softening of her husband after the pair adopted their first cat: a change deep down that was hard to understand. Taking to Instagram, she found a number of men hopelessly devoted to doting on their furry friends, and wanted to find out more; to document the changing conditions of masculinity in society.

. . . .An actor/influencer, a truck driver, a school teacher, a firefighter, a software engineer, a police officer—these men lead very different lives and can be found all over the country.

Yet they’re united in the love for their cats. An experienced directing/producing team captured how each and every cat proved the catalyst for something special and unique in their companions’ lives, from adventure, to comfort, to a feeling of purpose.

“It’s about being ok for men to show their compassionate and vulnerable side and how that should all be part of the definition of strength and leadership,” said Hoang in an interview. “Cats promote caring for others, both animal and man. Now during a pandemic, we know very plainly how pets contribute to our mental health and wellbeing. In the end, this is a film about taking care of each other.”

The film’s page (link above) shows that it’s received a lot of awards and selections for screenings.  So far there are only three critics’ reviews on the Rotten Tomatoes site, but all are very positive. One compares it to the 2016 film Kedi (“cat” in Turkish), a documentary about the feral cats of Istanbul that is perhaps the best cat film I’ve seen (Kedi has a 98% critics score on Rotten Tomatoes; watch it even if you’re not a huge cat fan.)

Here’s the trailer for Cat Daddies, but, still on the ship, I can’t watch it.

6 thoughts on “Caturday felids trifecta: The rabbi’s cat; Freddie deBoer muses on his cat at 10; and manly men who love cats”