I don’t want to repeat the whole saga of the Royal Society of New Zealand and its defense of “other ways of knowing”, but here are a few steps leading up to this post that you can glean from my collection of posts on the issue.

1.) The New Zealand government has begun a policy that will facilitate teaching Mātauranga Māori (“MM”), or Māori “ways of knowing”, as coequal to science in secondary school science classes. Many universities have taken this up as well. The problem is that MM, while containing some practical wisdom about things like when to hunt or pick berries, is also heavily larded with superstition, religious claims, morality, and legend passed down by word of mouth over centuries. MM claims, for instance, that the Polynesians discovered Antarctica in the early seventh century; a completely unsupported and unrealistic claim. MM is also explicitly creationist. Thus teaching the contents of MM as coequal to science, and not interior to it—modern science is, after all, said to be racist and “colonialist”—is a bad strategy, one that will confuse students and drag New Zealand further down in its already-low ranking of science education among comparable countries

2.) In response to the government’s policy, seven professors at The University of Auckland wrote a letter (“In defence of science”) to the NZ magazine The Listener While arguing that MM is essential to be taught as a form of cultural inheritance and a force for devising policy, “it falls far short of what we can define as science itself.” That happens to be a fact. The purpose of the letter was not to denigrate Maori culture, but to argue that its “way of knowing” was not science, as well as to defend science itself.

3.) Enraged by this fact, academics, many Kiwi academics, and writers, as well as Māori people and sympathizers, attacked the letter and its seven writers, calling them bigoted and “racists.” This is because New Zealand is an overly woke nation, so that saying that MM falls short of science itself is, to many, equivalent to saying that “Māori are an inferior people.” (In fact, one of the signers, Garth Cooper, has Māori heritage.) In response to this misperceived racism, counter-letters were written and petitions were circulated. Given the climate of the country, few people wanted to come forward to defend the “Satanic Seven” who signed the letter.

4.) Worst of all, the Royal Society of New Zealand (RSNZ), devoted to honoring those who do good science, also attacked the Listener letter and its signers by issuing the following statement (it’s now disappeared from the RSNZ site): 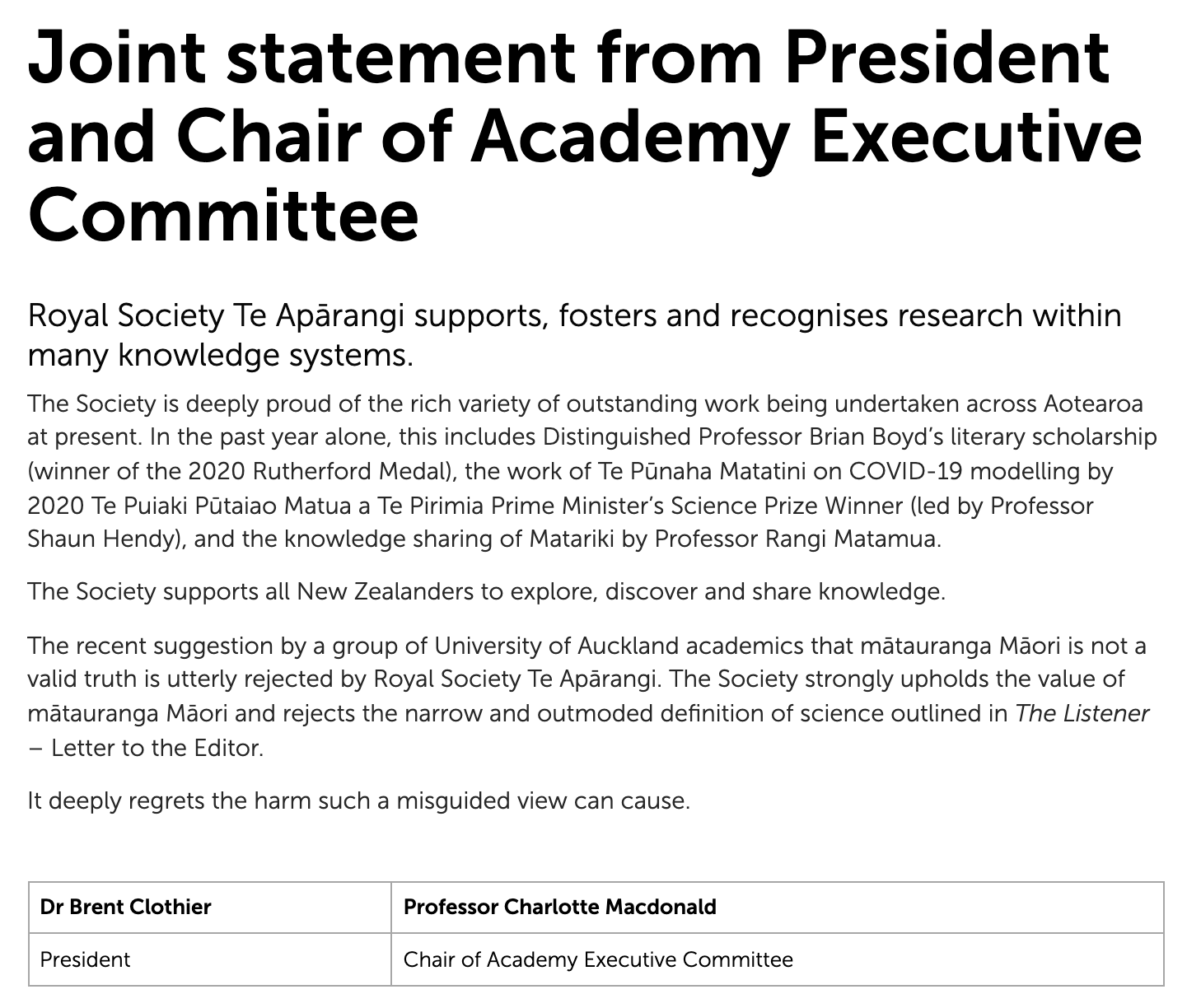 The last two paragraphs are particularly odious, asserting that yes, MM is science and that arguing otherwise causes unspecified “harm.”

5.) The foreign press got wind of this after several non Kiwi-scientists, including Richard Dawkins and I, issued public statements and wrote to the RSNZ about their ridiculous accusations. In the meantime, several people complained to the RSNZ that two of its members who signed the letter, philosopher Robert Nola and biochemist Garth Cooper, were guilty of unprofessionalism and of causing harm.

6.) The RSNZ launched a preliminary investigation of Nola and Cooper and, after having attacked them and their fellow signers in the now-vanished RSNZ statement, decided that the two members had done nothing wrong. The investigation was dropped. No apology was tendered to Nola or Cooper, who then resigned from the RSNZ in disgust.

But things aren’t over yet. This whole kerfuffle left a bad taste in people’s mouths, especially because many who agreed that MM is not equivalent to science were too afraid to say anything, lest they get punished or even fired (see below). I got a lot of emails from New Zealanders who sided with the Satanic Seven but were scared as hell to say anything in their defense. Talk about chilling of speech! On this issue, at least, New Zealanders were acting like advocates of China’s Cultural Revoution.

I’ve just obtained a petition/letter signed by 73 Fellows of the RSNZ objecting to the treatment of Cooper and Nola by the Society and calling for both an apology to the pair (a third Fellow sho signed had died in the interim) and a thorough investigation of the RSNZ’s practices and underhanded way of investigating its members. The petition is below the line, and a lot of what they call “big noises” have signed. The signers call for three motions to be brought before the RSNZ; the motions were proposed by Gaven Martin and seconded by Marston Conder.

The Fellows, listed below as cosignatories, wish to express their deep concern about what has been happening within the Royal Society of New Zealand over the last year, by moving and seconding the motions below for discussion at the at the 56th hui ā-tau o Ngā Ahurei Annual Fellowship on 28th April.

Many of us have lost confidence in the current Academy Executive and Council, whose actions seemingly have brought the society into disrepute, shutting down useful debate and bringing international opprobrium from leading scientists. We are further concerned about the lack of agency that Fellows have following the many restructures of the Society over the last several years, and the spending of fellowship fees to cover lawyers’ costs and, presumably, public relations consultants to defend the Society’s very poor processes and actions.

1. We believe that the content of the initial statement posted by the RSTA on its website in August 2021 about the controversy generated following the Listener letter on the relationship between mātauranga Māori and Science was ill-conceived, hasty and inaccurate in large part.

2. We are appalled at the mishandling of the formation of the initial committee set up by RSTA to investigate the complaint, the length of the process, and the handling of the publication of the outcome, which suggests both that the RSTA cannot decide whether mātauranga Māori is or is not Science, and impugned the integrity of two eminent Fellows.

3. It is extremely unfortunate that this process has led to the resignation from this Academy of two of its distinguished Fellows. One is a renowned philosopher of science, and the other is perhaps the strongest scientist of Māori descent in the society and is someone who has been active in supporting Māori students in education for decades, and who, along with other experts in Science, offered an expert opinion that was rejected by the Society as being without merit, and characterised as racist by members of the Academy Executive (and current and former Councillors).

We therefore move that:

1. Both the Society and Academy write to Professors Cooper and Nola, and to the Estate of Professor Corballis, and apologise for its handling of the entire process.

2. The Society reviews its current code of conduct to ensure that this cannot happen again, and in future the actions of the Academy/Council are far more circumspect and considered in regards to complaints concerning contentious matters.

3. The entirety of the RSNZ/RSTA entity be reviewed, examining structure and function and alignment with other international academies, and the agency given its Fellows upon whom its reputation rests.

Gaven Martin then transmitted the motions to officials of the RSNZ with his own cover letter, below, which I have permission to publish. Here it is. The recipient list includes the Chair of the Academy as well as the President of the RSNZ. I have put the third point in bold because it shows the climate of intimidation that besets not just the RSNZ, but the whole country when it comes to issues about its indigenous people.

Dear Paul (and  Charlotte and Brent and blind cc)

Please find attached three motions with a supporting letter, which we expect to be tabled at the 56th hui ā-tau o Ngā Ahurei Annual Fellowship meeting (hereafter AGM) on the 28th of  and circulated to Fellows before then.

The motions are moved by myself, seconded by Marston Conder, and have nearly 70 Fellows as co-signatories obtained over three days.

I would make the following additional comments.

This cover letter will be distributed to all signatories on Monday 28th March.

Note that this is both a free-speech issue, bearing on the right of fellows to say what they think in public without suffering official consequences, but also an issue of the credibility of the RSNZ itself, which has publicly aligned itself with MM and thus debased real science. This is a problem with the whole educational establishment in NZ, and it starts at the top with Prime Minister Jacinda Ardern. Maybe this has escaped her notice, but she may want to pay attention since her nation is becoming fractured by ethnic divides. Teach MM in schools: of course; teach MM as equivalent to science: no. Not unless, that is, Ardern wants her nation to become simultaneously woker and more ignorant.

The RSNZ has now distributed the signed letter/petition to its members and scheduled a meeting to discuss the motions on, as its notice says, “Wednesday, 13 Paenga-whāwhā April 2022”.  The agenda, which I’ll discuss in another post soon, is, as one person wrote me:

“. . . . larded with Māori activities that have become “traditional” in all sorts of settings (educational, governmental, even business) over the last few years of wokeness: a mihi (Māori welcome), waiata (songs: the words are given in Māori, without translation), and karakia (prayer): to conform to recent conformist practice, to establish where the RS sits in terms of respecting Māori culture, and, if you like, to exert systemic control, to establish the climate of thought which you’d be wiser not to resist.

There is no singing of either of New Zealand’s two national anthems (yes, it has two): God Defend New Zealand and God Save The Queen. That would be “colonialism.”

How can there be a fair discussion of MM in such a meeting? Well, perhaps there can be, and we can always hope that the three motions above are passed. Stay tuned.