Where we are now: The ship’s real-time map shows that, as expected, we’re proceeding north up the coast of South America, heading for a docking on Valparaiso on April 3.

The first map shows our detour to Puerto Natales and return: 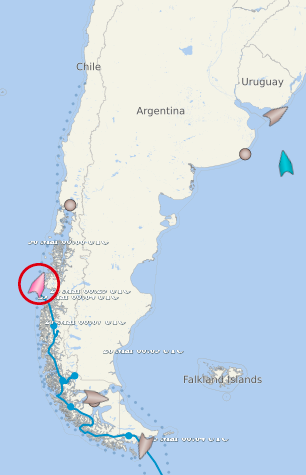 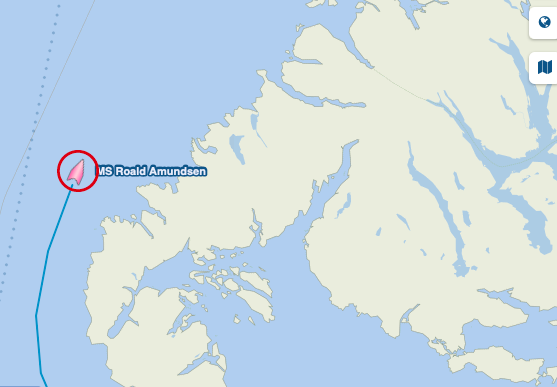 I see nothing out my window save the snotgreen sea , as I’m on the port side and we’re heading north. On the starboard, however, here comes the Sun over the coastal hills: 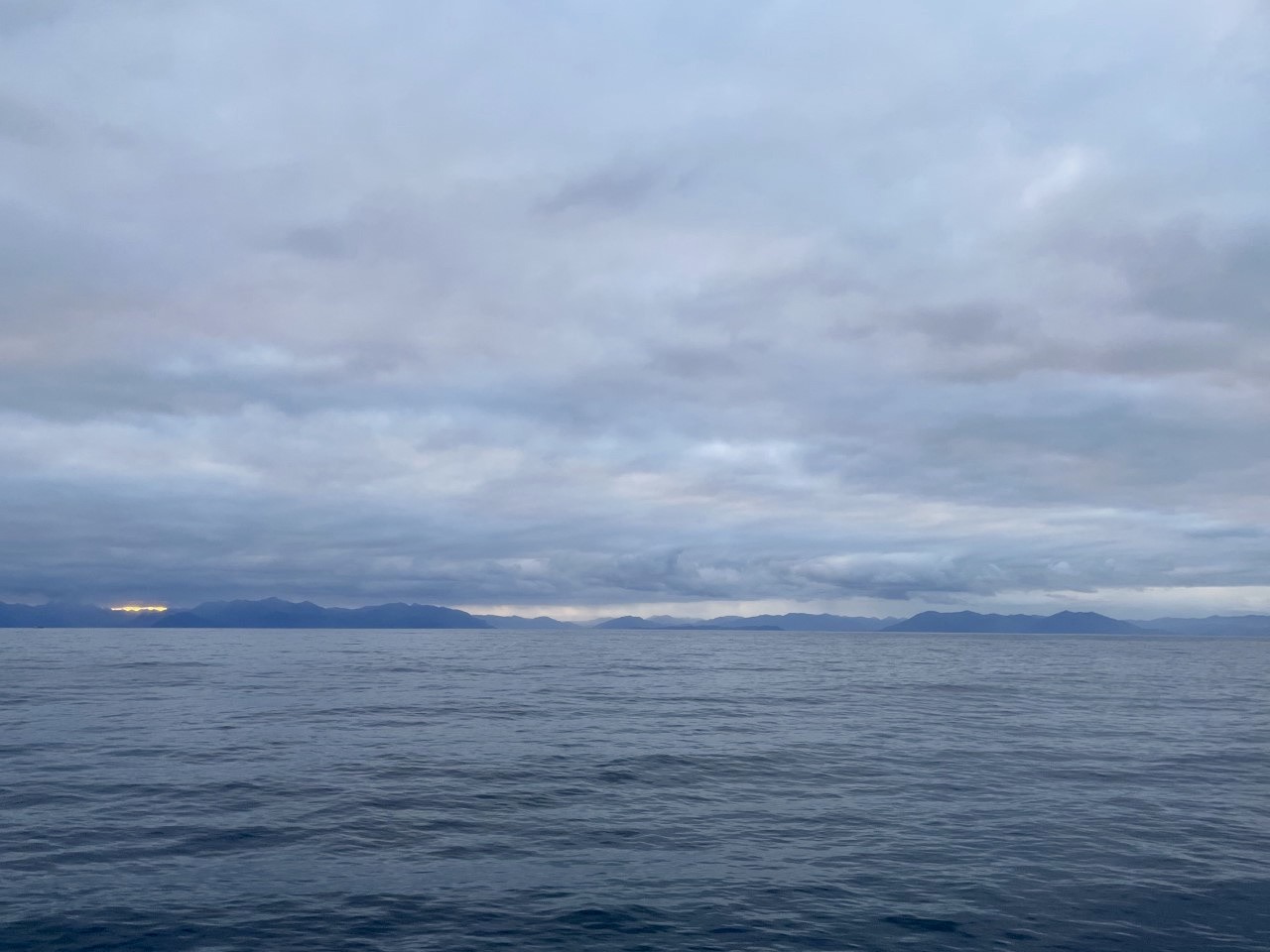 If you want to help out with “this day in history”, go to the Wikipedia page for March 30 and give us your favorite notable events, births, and deaths.

Good morning on a Hump Day (“Hari Punuk”, as they say in Indonesian): Wednesday, March 30, 2022, and National Hot Chicken Day. We’re not talking about heat as in degrees Fahrenheit or Celsius, but degree of spiciness, for “Hot Chicken” made with hot peppers is a speciality of the Southern US, particularly from Nashville, Tennessee. It comes in degrees of spiciness, and the hottest variety will burn out your oral mucosa. Beware of fiery, bright red chicken unless you’ve worked your way up to it (it is a form of masochism!): 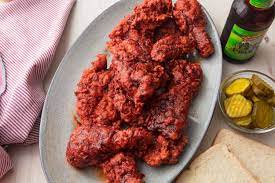 The New York Times headline has changed in the last hour. First it was that progress was being made in negotiations between Ukraine and Russia; now it looks worse (click on screenshot to read):

And the NYT news summary:

A day after peace talks yielded hope for an easing of Russia’s assault on Ukraine, local officials reported new attacks on Wednesday on the outskirts of Kyiv and the northern city of Chernihiv, two areas where Russia had vowed to sharply reduce combat operations.

The continuing attacks signaled that Moscow was in no hurry to end its war, now five weeks old, despite claims that it would de-escalate its operations after hours of talks on Tuesday with Ukrainian representatives in Istanbul.

The “talks” between Ukraine and Russia, such as they are, are reported to be pretty much stalemated: this is what we must hang our hopes on:

[The Kremlin’s] spokesman, Dmitri Peskov, told reporters that although Ukraine’s proposals were “a positive factor,” reaching a deal would still take a lot of work.

*Shades of Rose Mary Woods!  Logs of White House calls from the fateful day of January 6 show a seven-hour hiatus when Trump wasn’t communicating by phone. Ironically, one of the reporters on this Washington Post story is Bob Woodward, who helped bring down Nixon during Watergate (remember the gaps in the White House recordings?) The evidence comes from White House records turned over to the House by the National Archives.

Internal White House records from the day of the attack on the U.S. Capitol that were turned over to the House select committee show a gap in President Donald Trump’s phone logs of seven hours and 37 minutes, including the period when the building was being violently assaulted, according to documents obtained by The Washington Post and CBS News.

The lack of an official White House notation of any calls placed to or by Trump for 457 minutes on Jan. 6, 2021 — from 11:17 a.m. to 6:54 p.m. — means the committee has no record of his phone conversations as his supporters descended on the Capitol, battled overwhelmed police and forcibly entered the building, prompting lawmakers and Vice President Mike Pence to flee for safety.

. . .The House panel is now investigating whether Trump communicated that day through back channels, phones of aides or personal disposable phones, known as “burner phones,” according to two people with knowledge of the probe, who, like others interviewed for this report, spoke on the condition of anonymity to discuss sensitive information. The committee is also scrutinizing whether it received the full logs from that day.

One lawmaker on the panel said the committee is investigating a “possible coverup” of the official White House record from that day. Another person close to the committee said the large gap in the records is of “intense interest” to some lawmakers on the committee, many of whom have reviewed copies of the documents. Both spoke on the condition of anonymity because they were not authorized to discuss internal committee deliberations.

I tell you, this means big, big trouble for the Trumpster; perhaps even conspiracy charges. LOCK HIM UP!

*If you’re 50 or older, or have an underlying medical condition that puts you at risk of severe covid, you’re now eligible for a SECOND booster (Moderna and Pfizer boosters only, but the fourth shot also recommended to those who first got the J&J vaccine).

The Centers for Disease Control and Prevention said it would update its vaccine guidance to reflect the F.D.A.’s action. While she did not outright recommend a second booster for everyone now eligible, Dr. Rochelle P Walensky, the C.D.C.’s director, said the option for the added dose “is especially important for those 65 and older and those 50 and older with underlying medical conditions that increase their risk for severe disease.”

Dr. Marks [head of the FDA’s vaccine division]went a bit farther, saying those 50 and older who got their first booster more than four months ago, “should seriously consider getting another.”

However, my own doctor says the study supporting this conclusion was flawed, and he didn’t recommend my getting a second booster at present. Make your own decision!

You can read the FDA update here.

I’m late today, so I’ll just add this report from the Associated Press that there are monkeys loose in Florida! They live around the Fort Lauderdale airport:

The United States has no native monkeys, but the smallish vervets have roamed Dania Beach since the late 1940s after a dozen brought from West Africa fled a now long-closed breeding facility and roadside zoo. Today, 40 descendants are broken into four troops living within 1,500 acres (600 hectares) around the airport. Florida also has a few colonies of escaped macaques and squirrel monkeys. 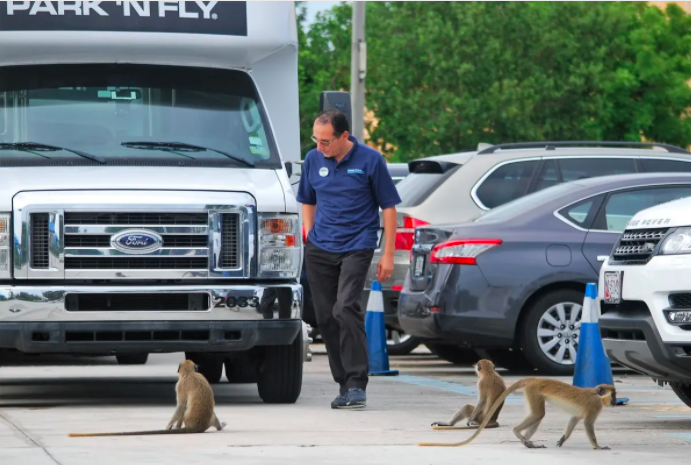 But the U.S. does have native monkeys. They’re called “humans.”

Meanwhile in Dobrzyn, Hili and Andrezej and squabbling again:

Hili: And what are you doing?
A: Taking a picture.
Hili: Do something wiser instead. 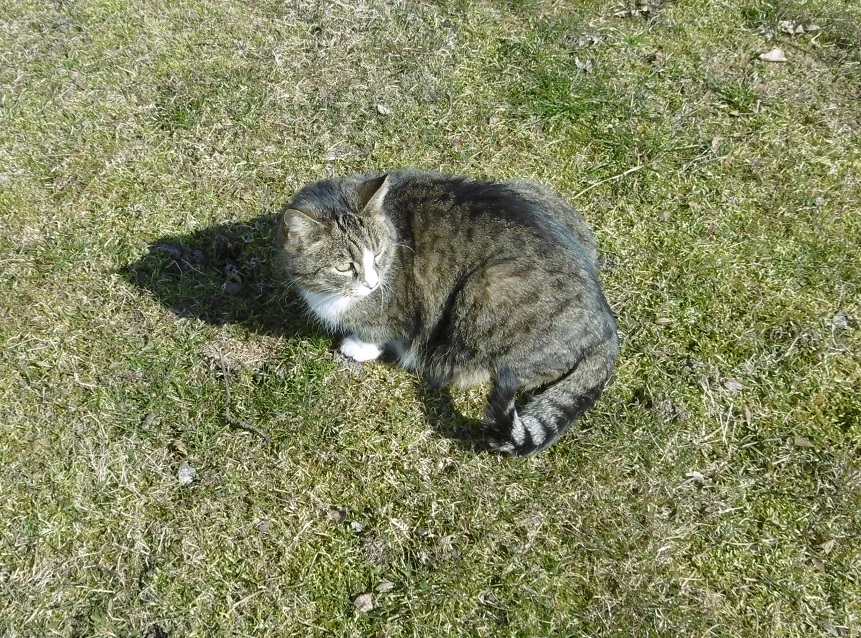 And a photo of little Kulka. Don’t you just want to rub her tummy? 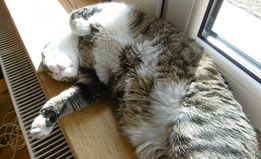 The meme below is from Simon, who says, “I’m guessing from the label that he won’t be worrying about punctuation-just punches.”  Remember what happened at the Oscars? 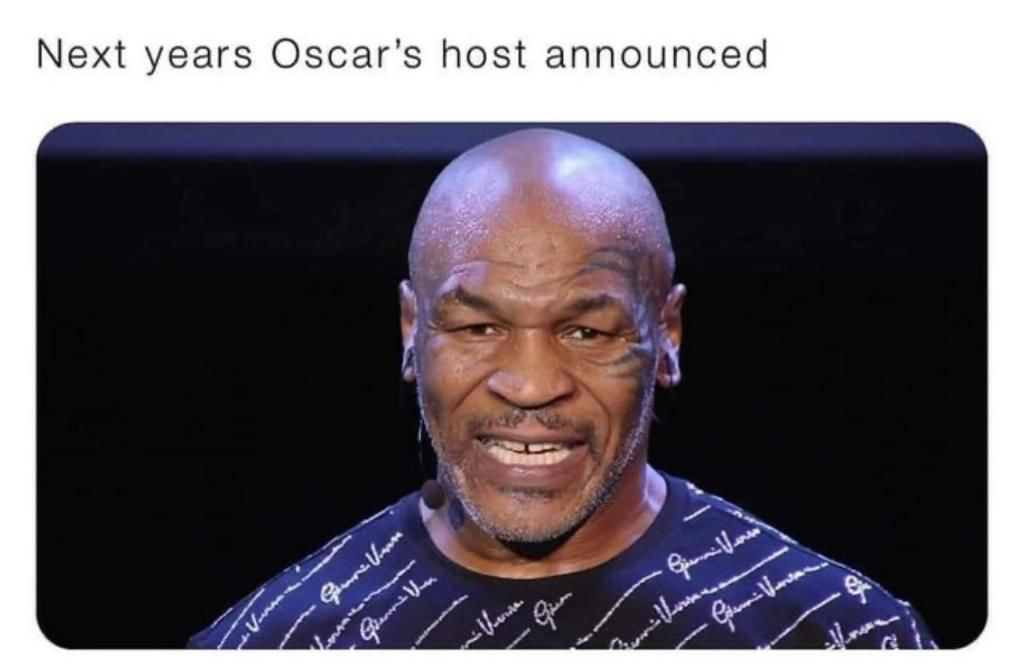 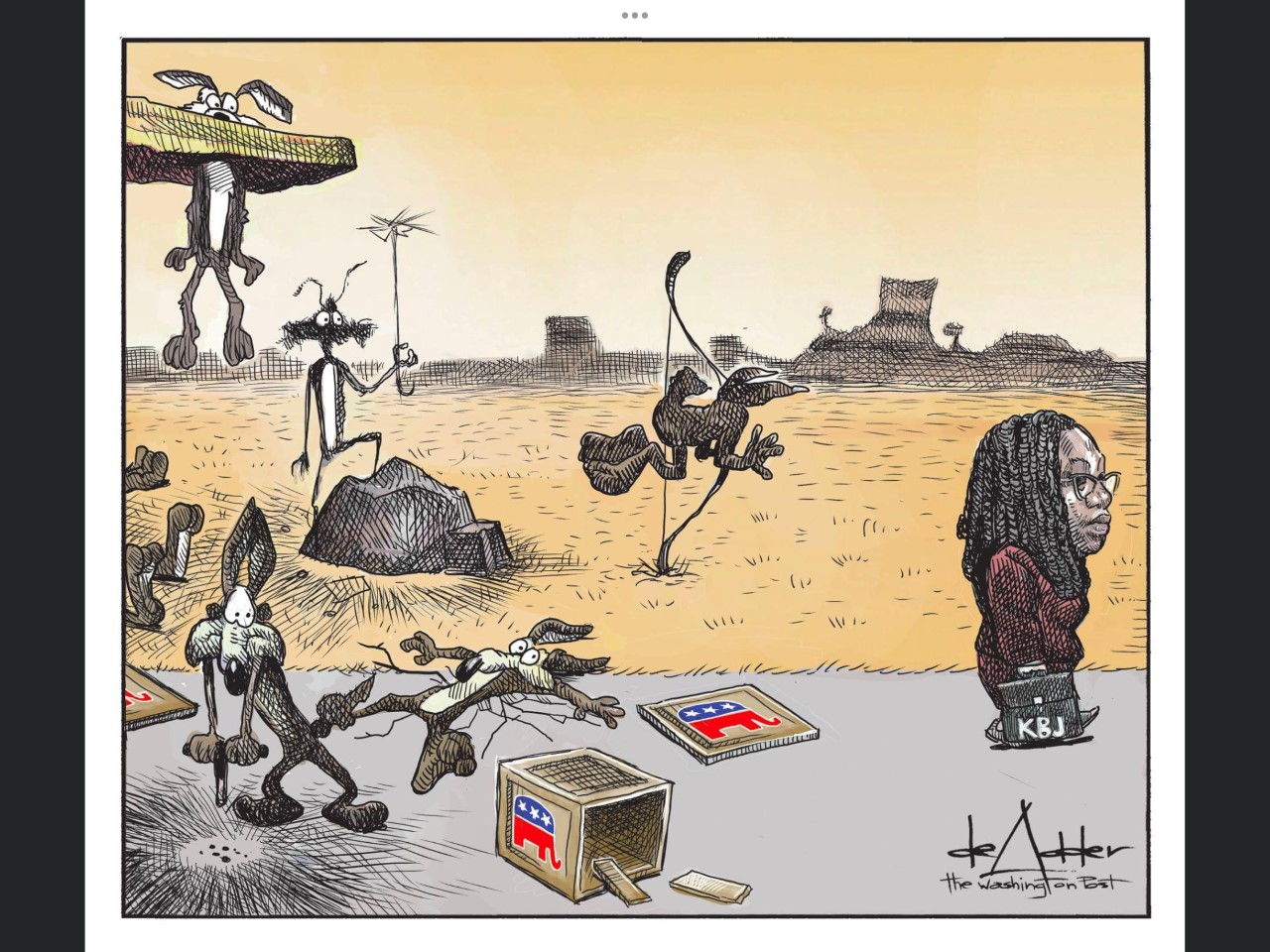 From Facebook. If you have an old teapot, you should repurpose it as an exaptation: 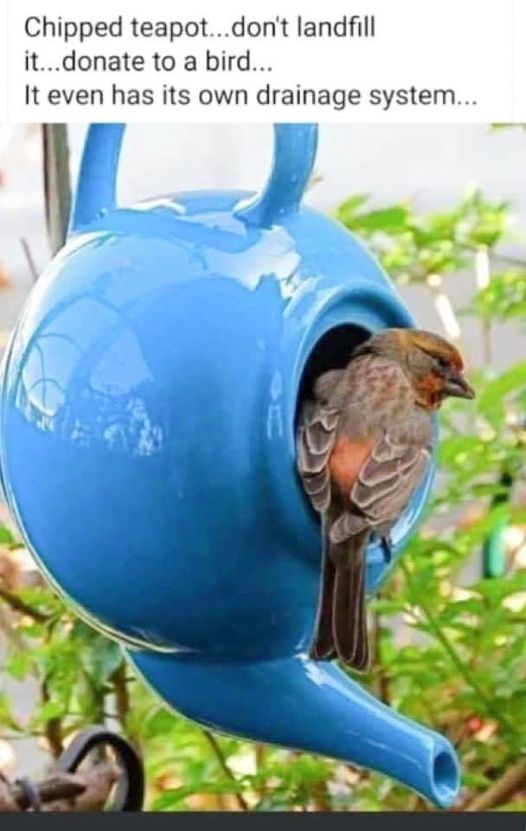 A tweet from God. I think things started going wrong when he created primates:

I am launching a formal review of Creation to see where it went wrong.

Even though I don’t “follow” anyone formally on Twitter, they’ve started sending me selections of tweets based on whose tweets I look at. Here’s one example

Titania has two tweets in her continuing series of things that are discovered to be racist. You can challenge yourself by trying to guess the reasons these things have been demonized; thumbs-up emojis, steam trains, and carrying babies mystified me. But you can track down the articles to find out.

THINGS THAT ARE RACIST
(part 41)

Reader Peter tells us that this Tweeter has a number of hints for Ukrainians about simple ways to sabotage the Russian invasion. Have a look at the thread:

Some advice to Ukrainians:

Tweets from Matthew. The Ukrainians who said “nuts” survived!

#Ukraine Roman Hrybov, the Ukrainian soldier, who said the now-famous "Russian warship, go fuck yourself" phrase when asked to surrender, returned home. It was initially thought that Hrybov and all the border guards on Snake Island were killed. Hrybov was captured by Russians pic.twitter.com/RVzfzK3ii4

This is brave and sad at the same time:

Okay, I’m going to have to check this out. But who was Trump’s Rose Mary Woods?

Breaking —> White House logs from Jan. 6 turned over to House show gap in Trump calls of seven hours and 37 minutes