Where we are now: The ship’s real-time map shows that, as expected, we’re still moored at the dock in Puerto Natales. We had to stay here overnight because the people on the trip to Torres del Paine weren’t scheduled to return till after 10 pm, and we may have to pass through the White Narrows again, but only during “slack tide”. (See post from later today.) We’re scheduled to depart, still wending our way towards Valparaiso, around noon: 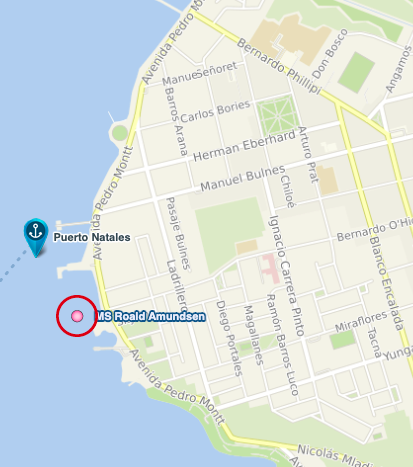 There are no photo of the area this morning because I’m keeping my curtains closed, on the ship’s advice, to fend off bird strikes. But here’s where we are anyway in a photo from yesterday:  the dock at Puerto Natales, taken as we were slowly approaching it. It’s one of the few panoramas I’ve taken that I actually like (do click to enlarge):

There will be a travel post later today; I’m lecturing at 1 p.m.

Welcome to Monday, March 28, 2022: National Black Forest Cake Day. which is best if one uses sour (pie) cherries rather than maraschino cherries. It’s bascially a chocolate cake with cherries and cherry liqueur; the latter (“Kirschwasser”) gives the cake its name since the liqueur is typical of the Black Forest region. You can find a good recipe here, and this is a photo: 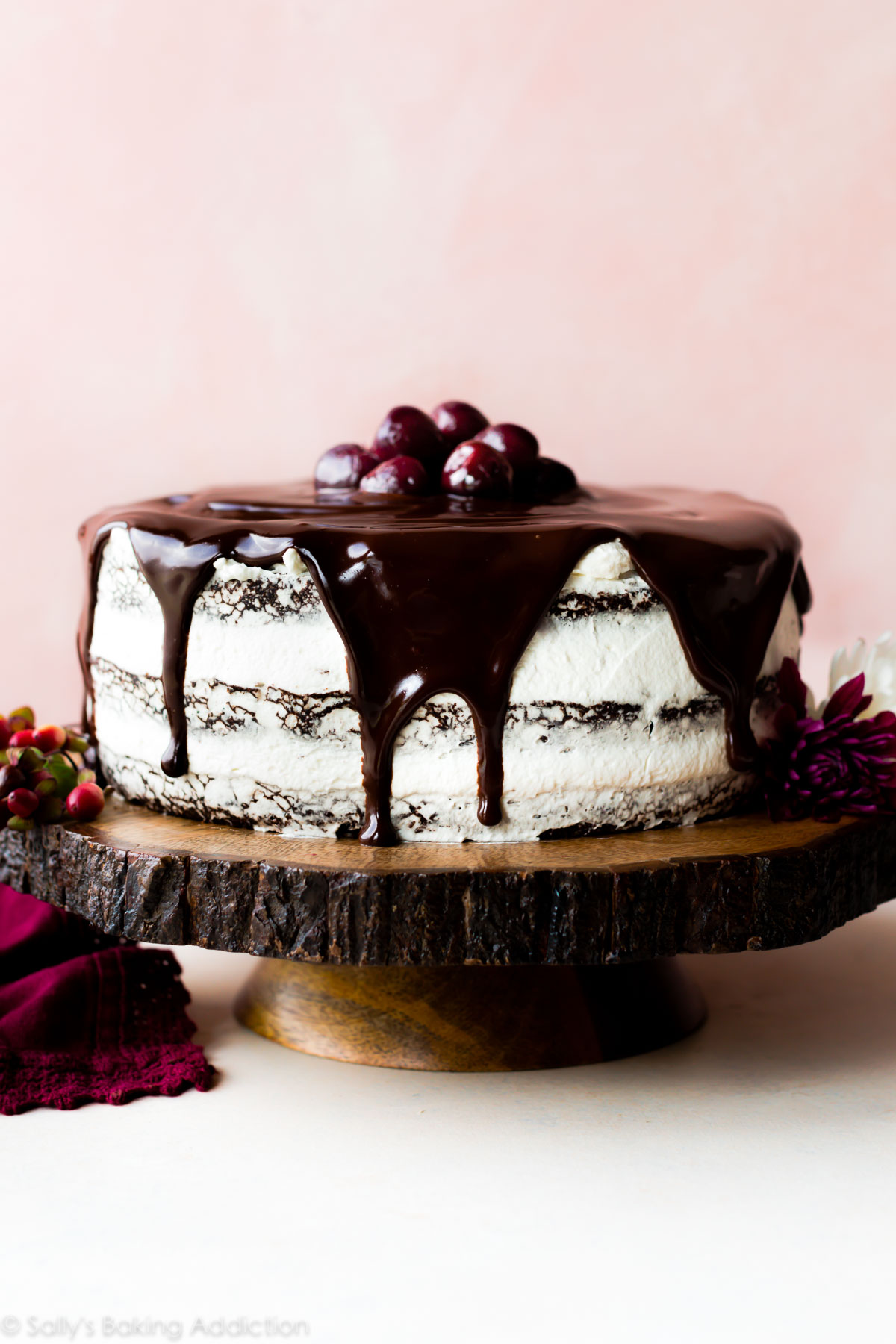 If you want to help out with “this day in history”, go to the Wikipedia page for March 28 and give us your favorite notable events, births, and deaths.

Here’s the headlinea from today’s New York Times; click on the screenshota to read. The first was 45 minutes ago, before I went to breakfast; the second must have been put up during that time. For each I’ve given the NYt’s summary

And the NYT’s summary:

Russia appears to be shifting its focus to securing control of eastern Ukraine after efforts to take the capital, Kyiv, and other major cities stalled in the face of stiff resistance.

Ukrainian officials said that they are worried that Russia may try to split the country between regions it controls and those it does not, a division that recalled the fate of Germany and Korea after World War II.

Two notable events. First, the Russian shelling around the nuclear facility at Chernobyl has caused concern among Europeans, who fear that an accident could unleash radioactive material across a wide region. The deputy prime minister of Ukraine has “called on the U.N. to establish a mission to take immediate measures to demilitarize the exclusion zone around the plant.” Of course that would, like “closing the skies,” put the West in military conflict with Russia, and seems a non-starter. Further, Ukrainian President Zelensky gave a 90-minute Zoom video interview to Russian journalists. Did they air it in Russia? Not a chance!:

Hours later, the Kremlin responded. A government statement notified the Russian news media “of the necessity to refrain from publishing this interview.”

. . .After they finished the interview, the journalists posted about it on social media, promising that they would soon publish it. Several hours after that, the Russian telecommunications regulator, Roskomnadzor, released a statement directing Russian news outlets not to publish the interview, and warning that an inquiry had been launched against the reporters involved to “determine their responsibility.”

Even by the standards of contemporary Russia’s arbitrary law enforcement, the statement was remarkable, offering no legal pretext to justify the order not to publish the interview. But in the wake of the law signed by Mr. Putin early this month — potentially punishing news reporting on the Ukraine invasion that deviates from the Kremlin narrative with as much as 15 years in prison — the government directive had an impact.

None of the Russian interviewers, of course, published anything about the exchange with Zelensky, though several media companies based outside Russia put the interview on YouTube.

It is not in Russia’s interest to have Zelensky describe the carnage that Russians are inflicting on his country.  One could not have expected Putin to allow this interview to be aired.

As Russian attacks continued across Ukraine, diplomats from the two nations were scheduled to arrive in Turkey on Monday for talks, with President Volodymyr Zelensky saying his country was “ready” to discuss adopting neutral status, while the Kremlin offered little hope for an agreement that would end five weeks of fighting.

In an interview on Sunday with Russian journalists, Mr. Zelensky said that Ukraine was willing to discuss lifting restrictions on the Russian language and adopting a neutral geopolitical status. But he insisted that any deal would need to be validated by a referendum to be held after Russian troops withdraw, and that other countries would need to provide his nation with security guarantees.

The “neutral geopolitical status” would mean that Ukraine would promise not to join NATO, and perhaps not the EU. But a referendum wouldn’t win, and the insistence that Ukraine retain its sovereignty is a non-starter for Putin. It’s no wonder that a spokesman for the Kremlin said that diplomatic efforts so far had made “no significant progress.” My guess is that Putin won’t accept what Zelensky is offering.

*The Essay That Didn’t Need To Be Written Department: The winner for the week is by writer Rod Buntzen, who gets the raspberries for trying to draw conclusions we already know from his own personal experience. It’s from his NYT essay, “This is what it’s like to witness a nuclear explosion.” Buntzen watched a test detonation of an H-bomb in 1958, and describes it graphically. But we already know about this, and the lesson that Buntzen draws after a long account of the damage from that bomb is this:

If nuclear weapons are used in Ukraine, the biggest worry is that the conflict could spin quickly out of control. In a strategic war with Russia, hundreds of detonations like the one I witnessed could blanket our countries.

Having witnessed one thermonuclear explosion, I hope that no humans ever have to witness another.

Does anybody?  And this was a full-fledged H-bomb. Should Putin go that route instead of using tactical nuclear weapons, he’s guaranteeing the destruction of his country. The whole editorial is an exercise in showing off and virtue flaunting.

*Here are the winners of last night’s Big Six Oscars (Joe Morgenstern, the Wall Street Journal‘s movie critic, published his predictions yesterday about who should win in the major categories and who will win.

It looks as if my movie-loving nephew Steven guessed all of these all on the money, so he wins the book. He even bested Joe Morgenstern.

Gossip from the Oscars: The Guardian reports this:

So just a refresh for those coming in late or early wherever you are. The night’s biggest moment came from best actor winner Will Smith, who went viral after he appeared to slap Chris Rock for making an ill-advised joke about his wife Jada Pinkett’s alopecia. Rock joked that she was set to make GI Jane 2 next, which led Smith to rush up on stage and try to hit Rock. Smith then told him to get his wife’s name out of his mouth.

Here’s the actual video. Smith was rightly angered, but he shouldn’t have hit Chris Rock, especially on live television. They could have settled it in the alley afterwards:

VIA JAPANESE TELEVISION: The uncensored exchange between Will Smith and Chris Rock pic.twitter.com/j0Z184ZyXa

Meanwhile in Dobrzyn, Hili is talking about “hell on Earth”. When I asked whether the cat was referring to Ukraine, Malgorzata replied, “It’s more general. There is not a day without hell present in many places on Earth. Some people live far away and they have a ‘normal’ life.”

Hili: What is normality?
A: Awareness that today hell is far away from us. 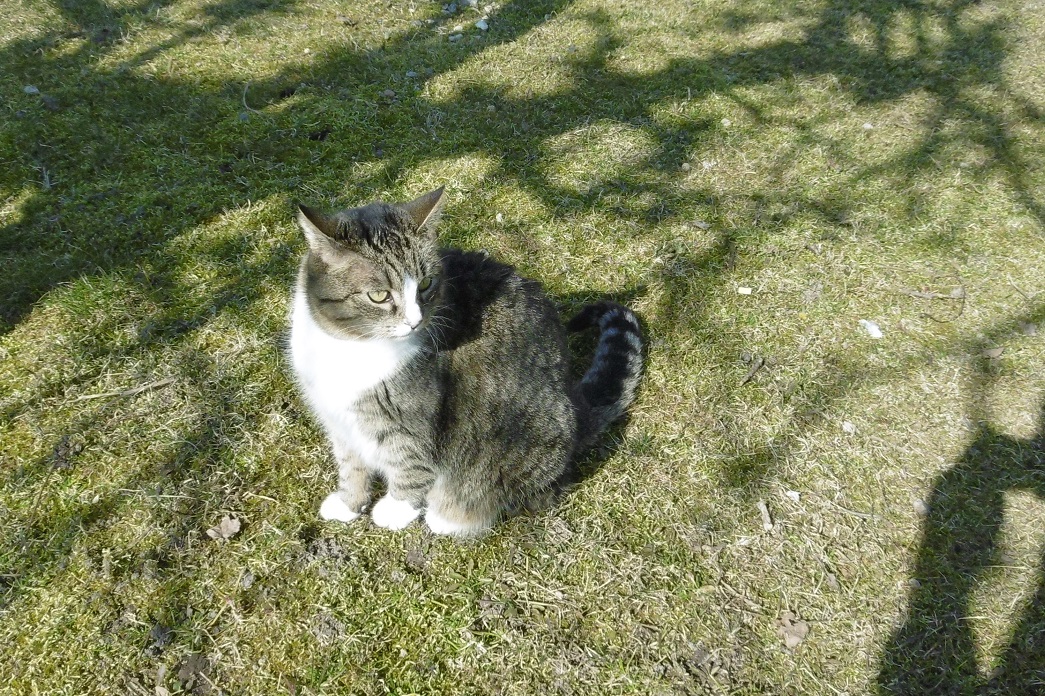 And here’s a picture of Karolina, the girl from Kyiv, showing her love of Hili: 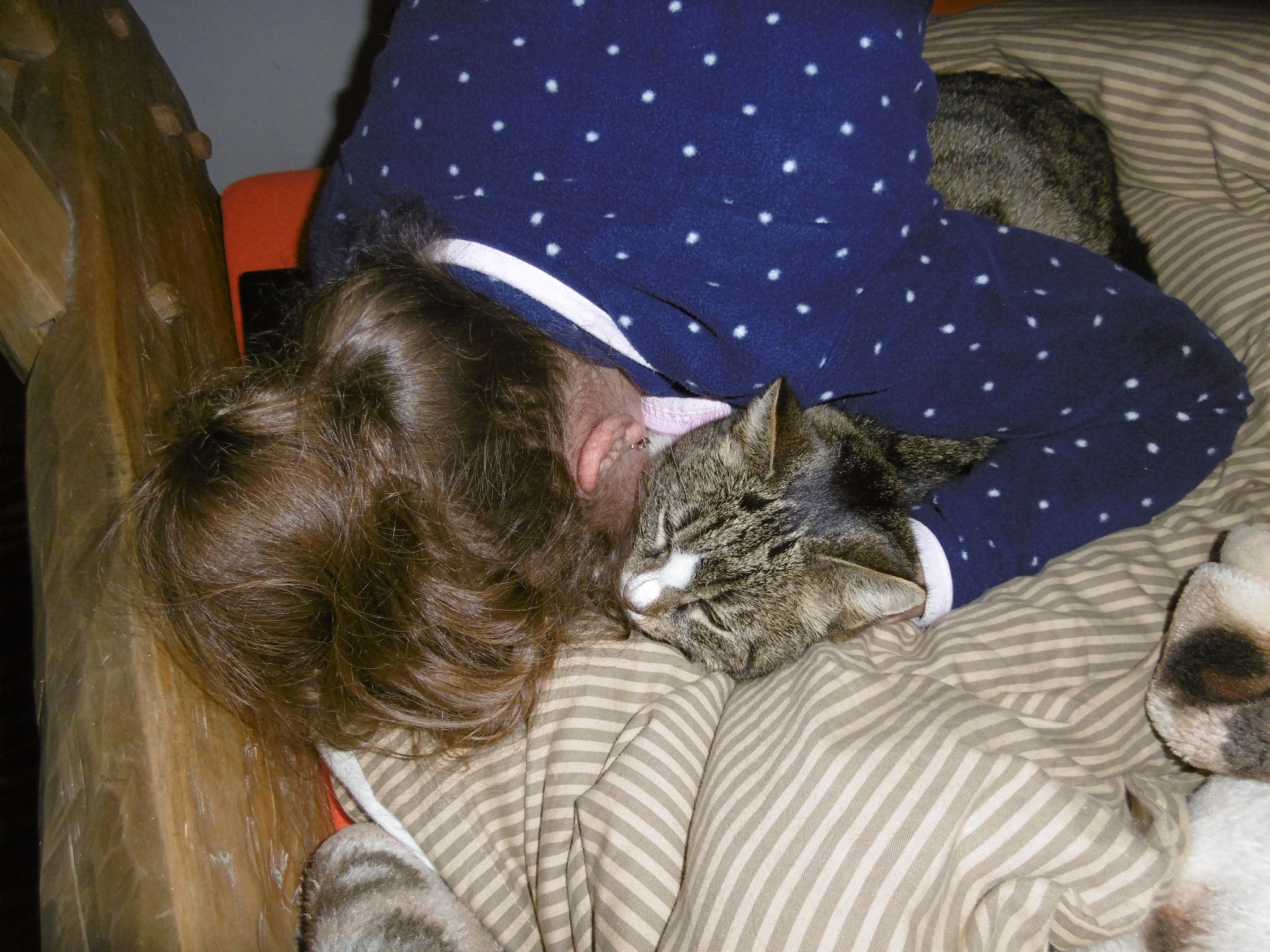 A groaner from Barry: 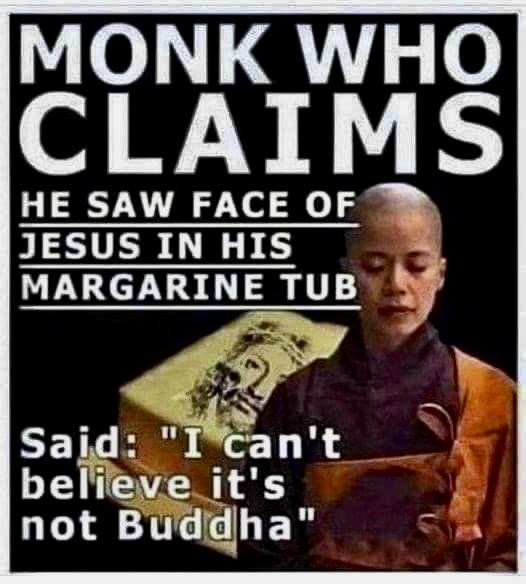 From reader David (it’s not his cartoon, so I’ll point out that the word “only” is misplaced): 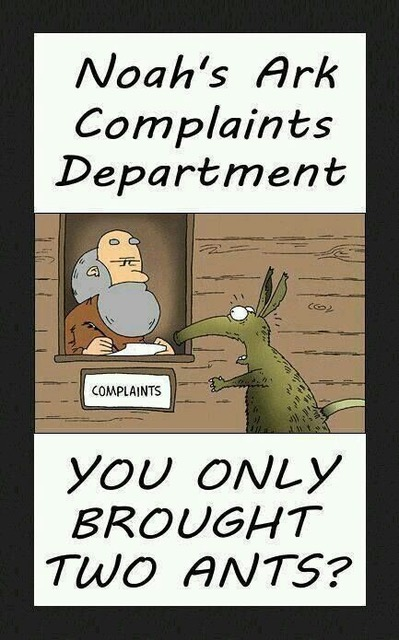 . . and from reader Pliny the in Between’ssite The Far Corner Cafe (click to enlarge): 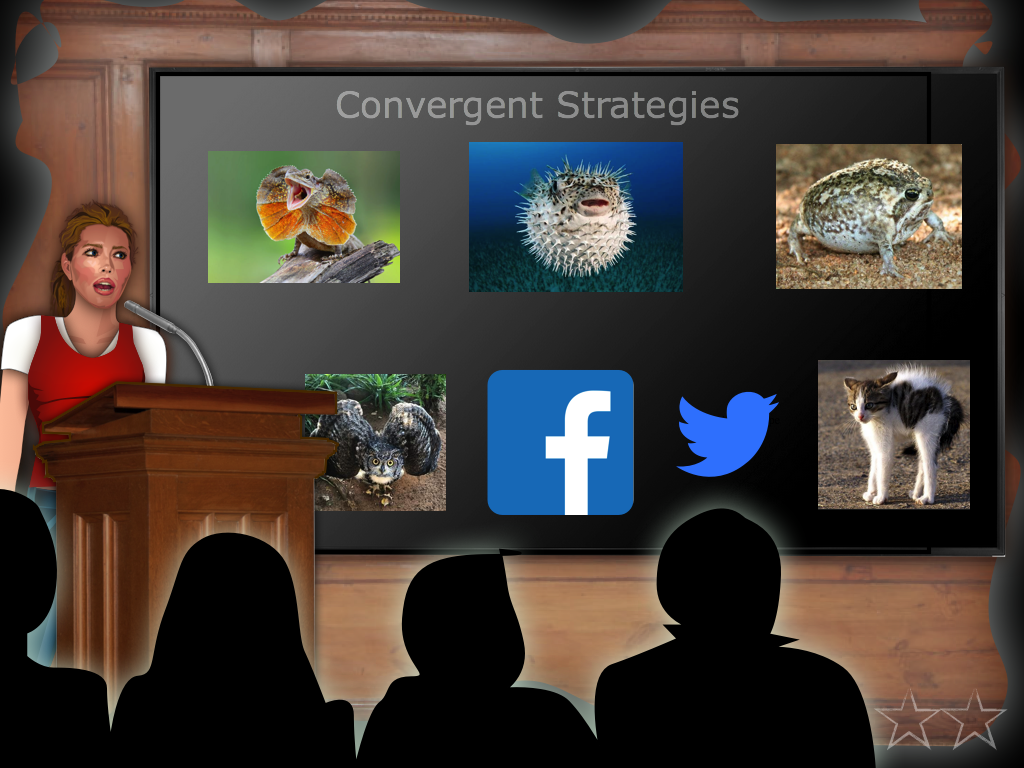 God screwed up, as he does so often. Well, he allowed Hawkins to screw up, preliminary toxicology reports indicate at least ten drugs found in his body.

Two tweets from Simon. Yes, the famous “ploughman’s lunch” in Britain is now harmful and offensive, and has received a new name. And the second tweet makes you guess (not hard!). (“Quorn” is a meat substitute mad from fungus.)

From a Wimpy, 17 years ago, approx. pic.twitter.com/lKZjCm7EwR

She was deported to #Auschwitz from the #Theresienstadt ghetto on 18 December 1943. She did not survive. pic.twitter.com/HSP1BMEjGL

Here’s how Trump would be handling the Ukraine/Russia conflict:

Trump probably thinks the Black Sea is in Africa. https://t.co/5incfhB3Gv

Tweets from Matthew: Ceiling Cat bless the Ukrainians: they don’t even forget the marsupials!

Video. 8 kangaroos are being evacuated from Kharkiv.
V Unian. pic.twitter.com/gJyT1dIxkR

#CharlesDarwin’s influential 1877 article ‘A biographical sketch of an infant’ based largely on his notes on the development of William Erasmus has been translated into traditional Chinese. #HistSci https://t.co/B0ApXUeDdf
This is the only photo of Darwin with another person. pic.twitter.com/rooMIzDX9i

I may have posted this before. If so, here it is again:

In Memoriam: Yulia Zdanovskaya, a 21-year old mathematician, was killed on March 8th, 2022 during a Russian forces attack on Kharkiv, Ukraine. In 2017, Yulia represented Ukraine at the European Girls' Mathematical Olympiad and won a silver medal at the competition. pic.twitter.com/zaaRl5HEb6

This is funny, and it is true that the bill has an axolotl on it! Click on the picture to see the adorable salamander.