This is the second part of yesterday’s post (recounting the events of Wednesday) that began with a wonderful morning visit to Cuverville Island. After lunch, we turned stern and headed north, with the next stop being Puerto Natales, gateway to Chile’s fantastic Torres del Paine National Park. (I was there on a 2019 trip, and rather than see it again—though you MUST at least once in your life—I opted for a tour on Sunday of the local area.)

But here I want to show the three hours of wonderful views we had heading north, before we left all the land behind entered the turbulent Drake Passage.  Wednesday afternoon was sunny, the glaciers were abundant, and islands were one one side of us and the Antarctic Peninsula on the other. I froze my butt off taking photos and running around a deck slippery with melted snow.)  At this advanced age I always wonder, when leaving a place I love, whether I’ll ever see it again, and so I wanted to imprint on my neurons as much as possible of the magic of Antarctica.

There will be few penguins, as we weren’t on land, and perhaps you’ve seen enough snow-capped mountains and glaciers, but in case you hadn’t—and just for the record—here are more.

First I want to show two similar pictures of a trio penguins. The photos are almost the same, but they’re among my favorites from this trip.

A trio of gentoos facing Cuverville Harbor.  Please don’t forget to click at least once on the photos to enlarge them! 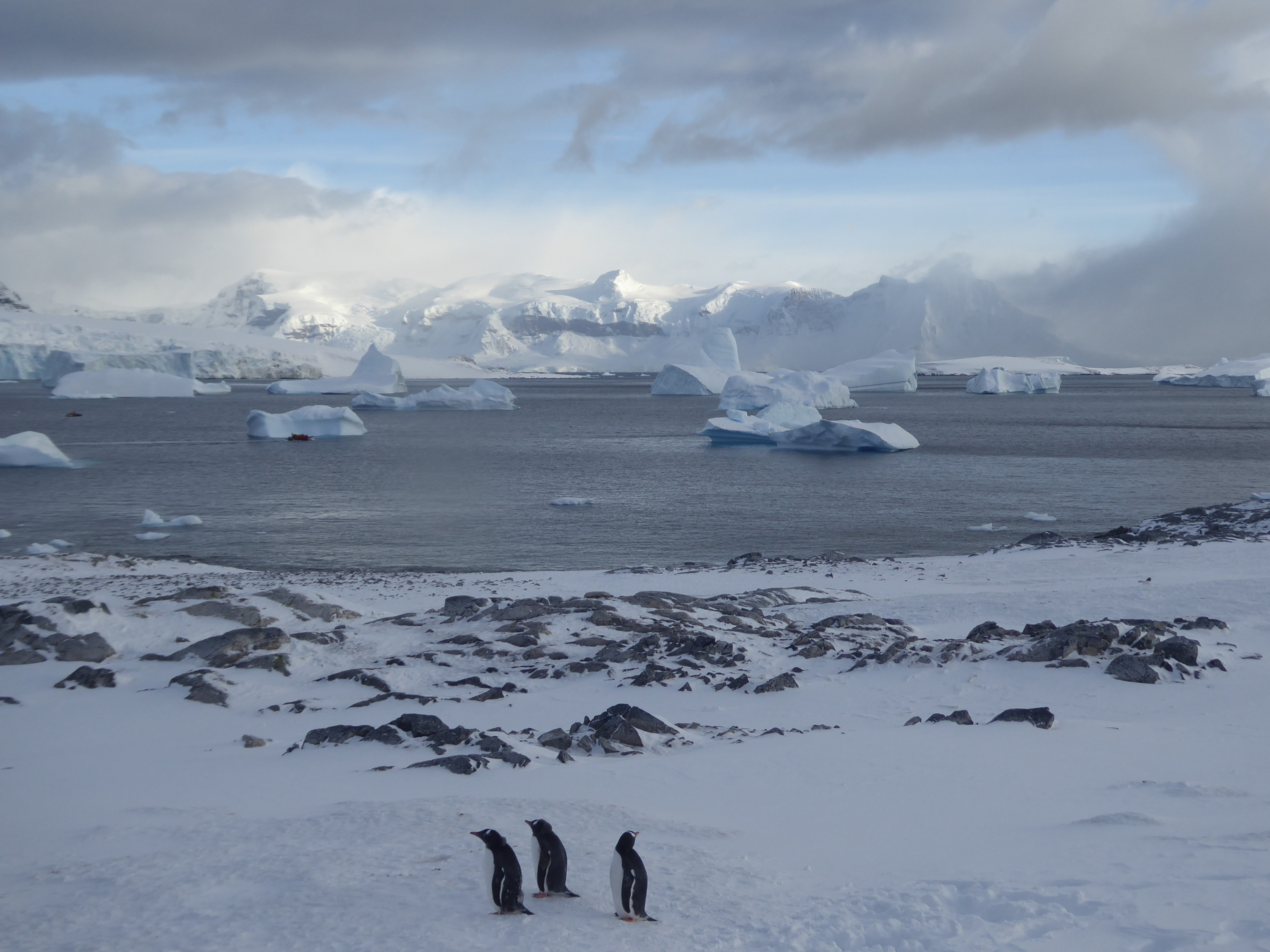 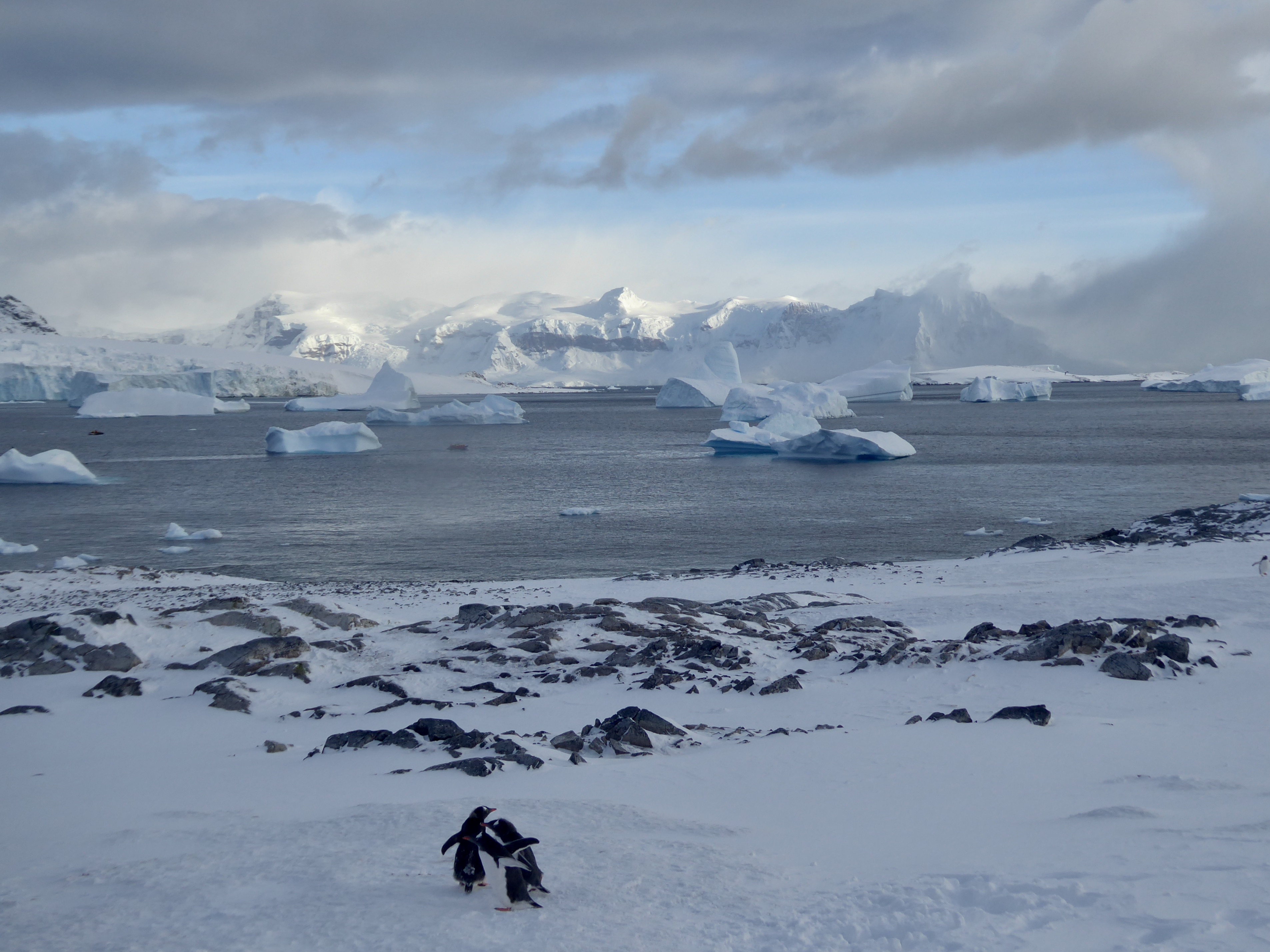 The waters around Cuverville: 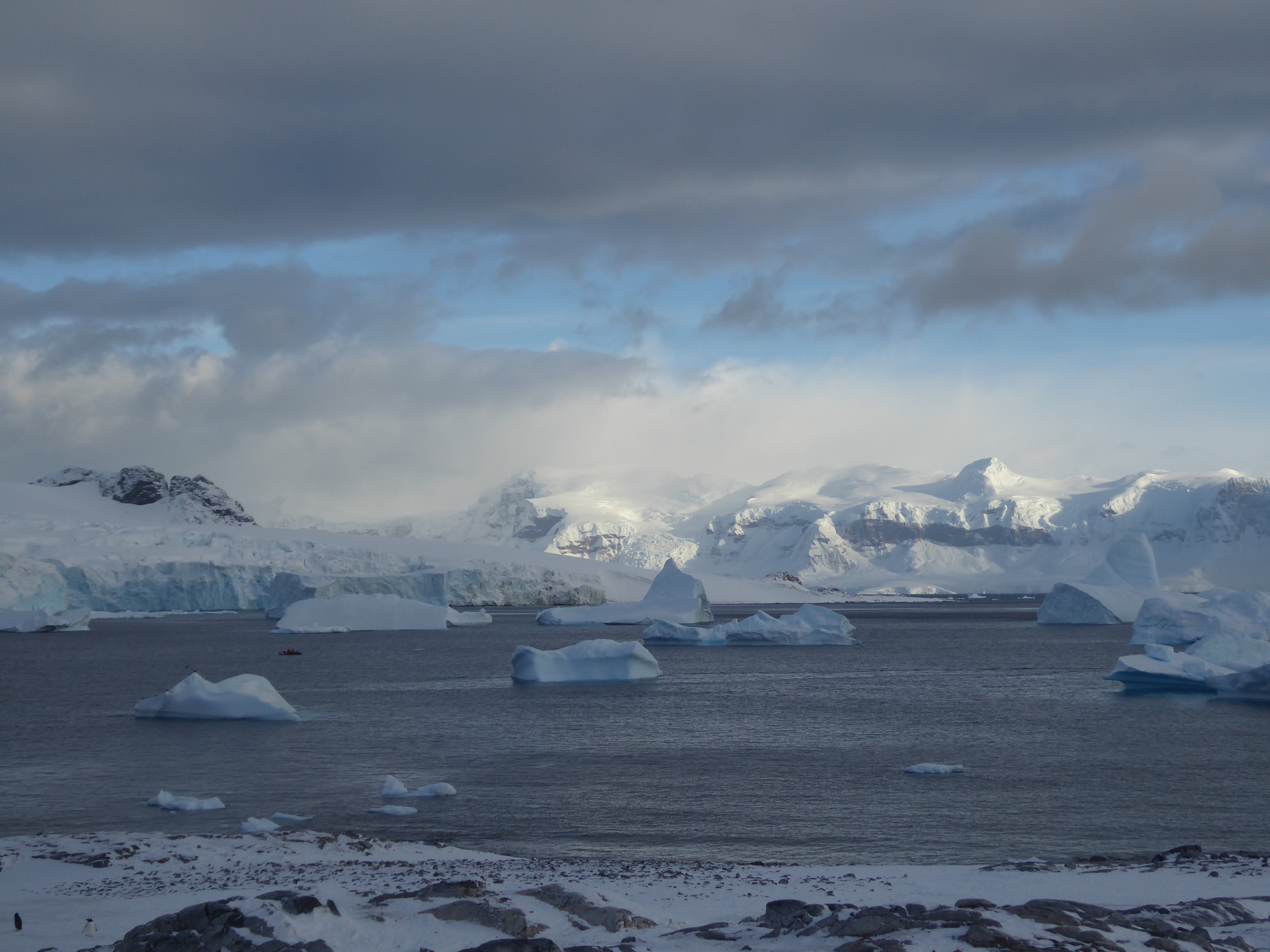 On the way out: 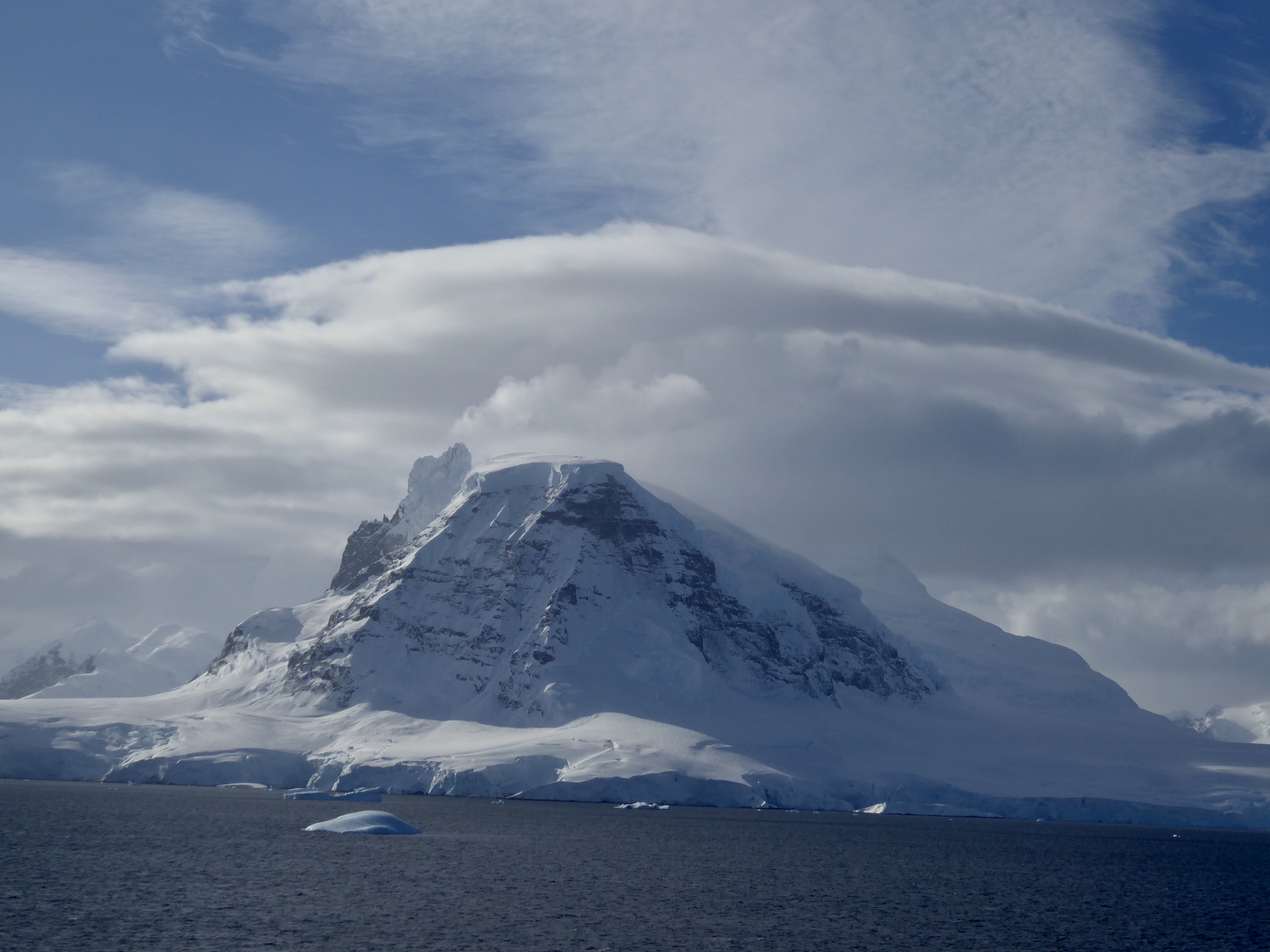 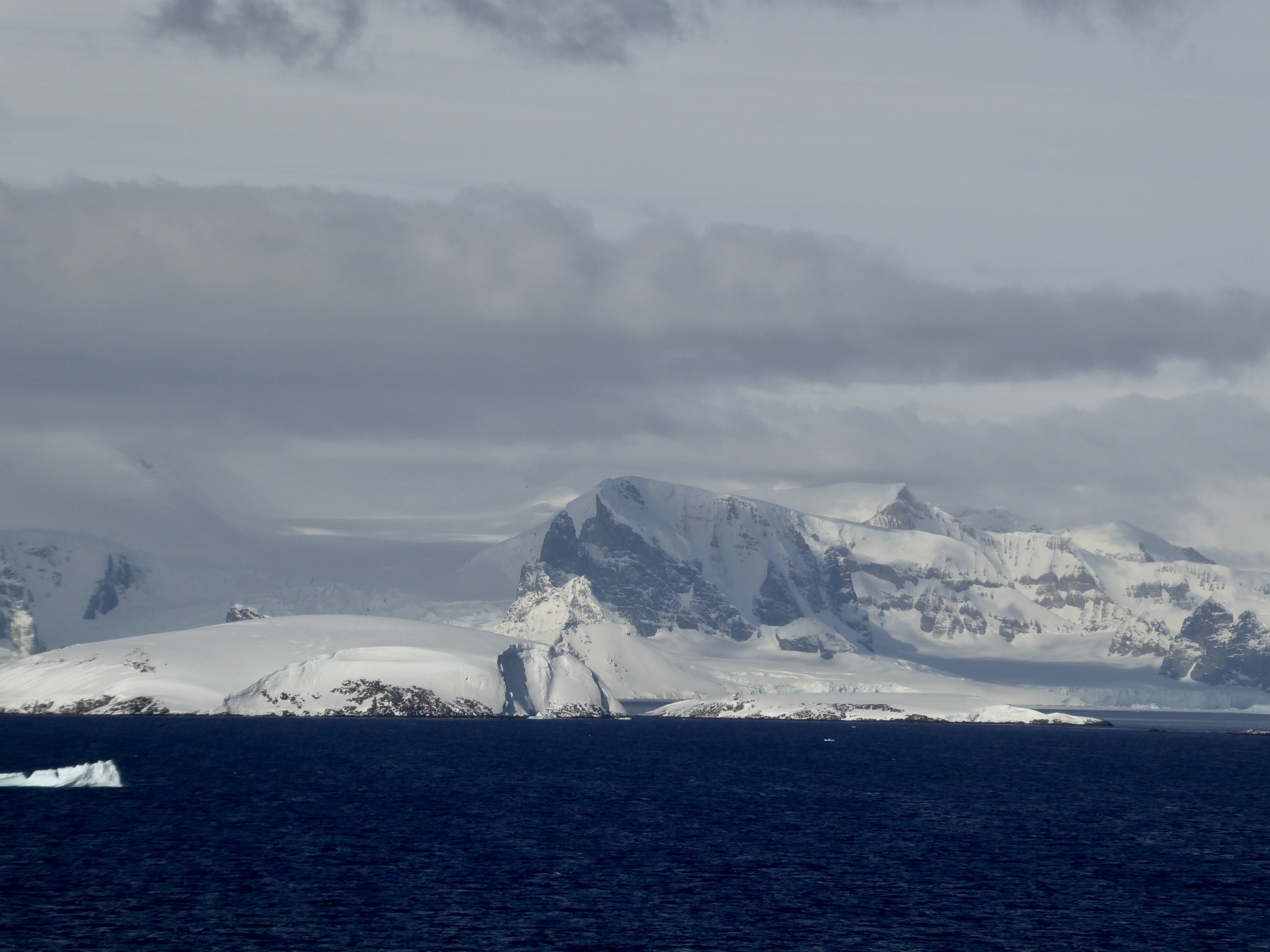 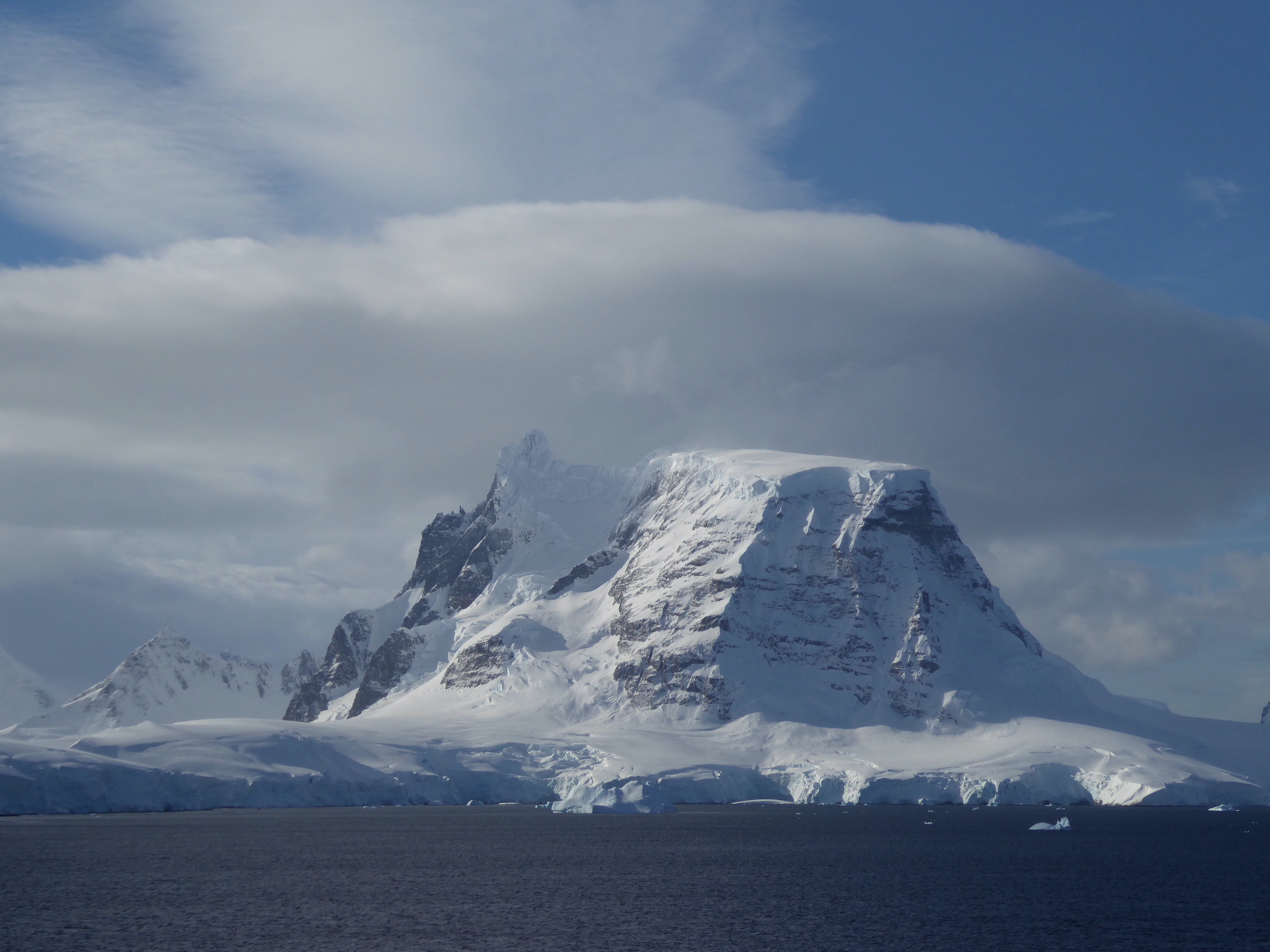 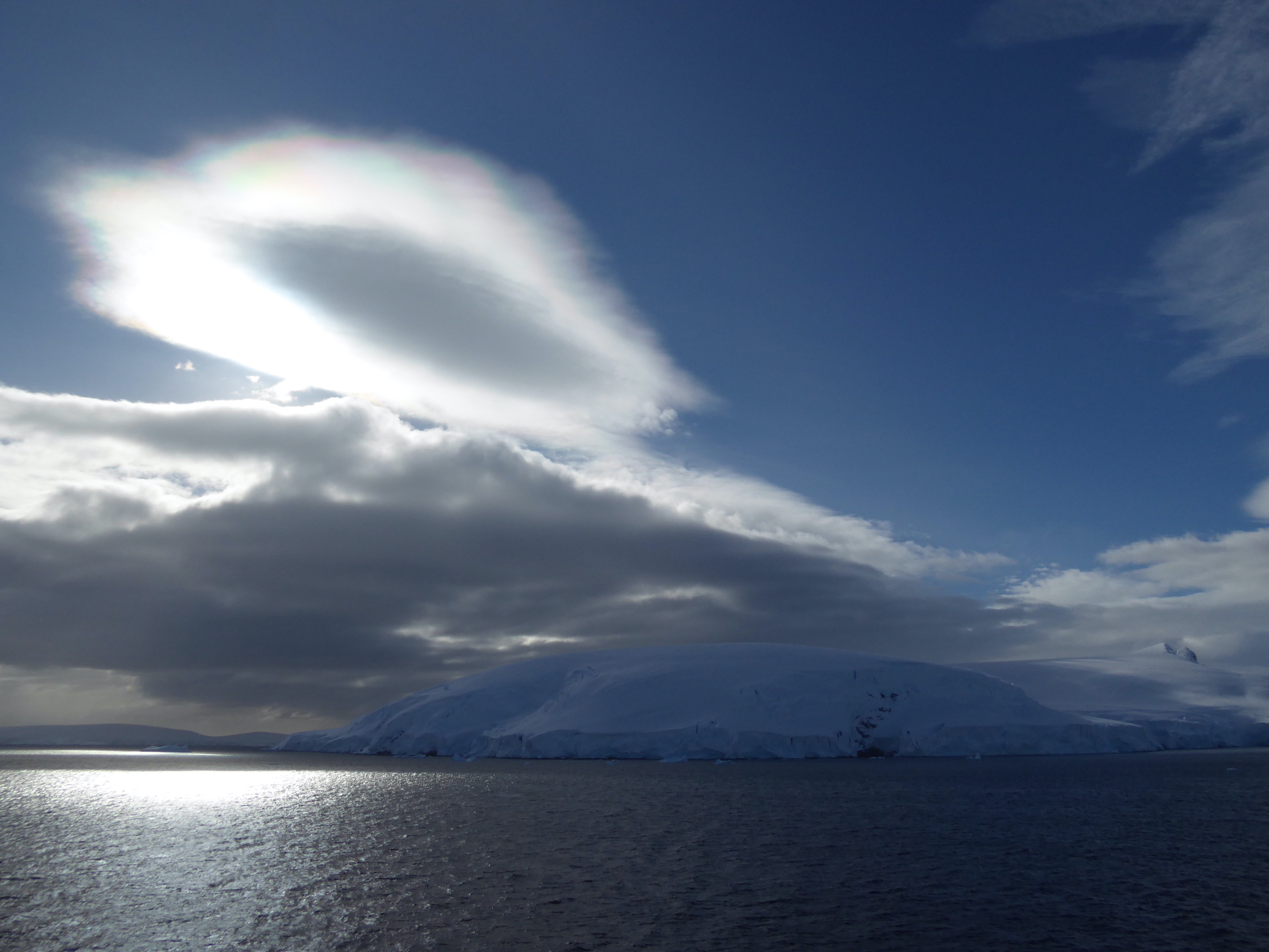 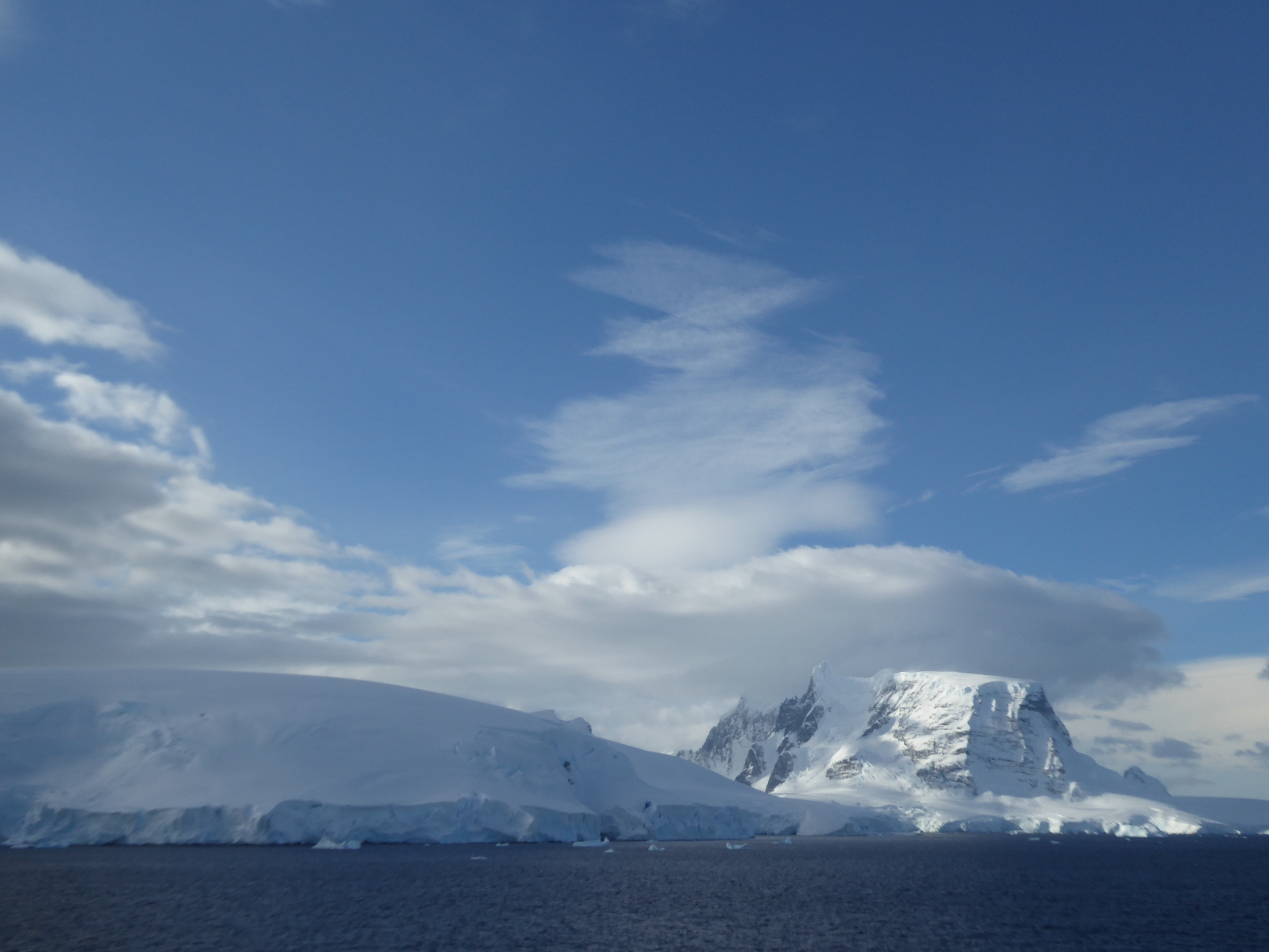 One of the lovelier bergs I’ve seen. Note Darwin’s “beryl-like blue” that he noticed in the glaciers of the Beagle Channel. 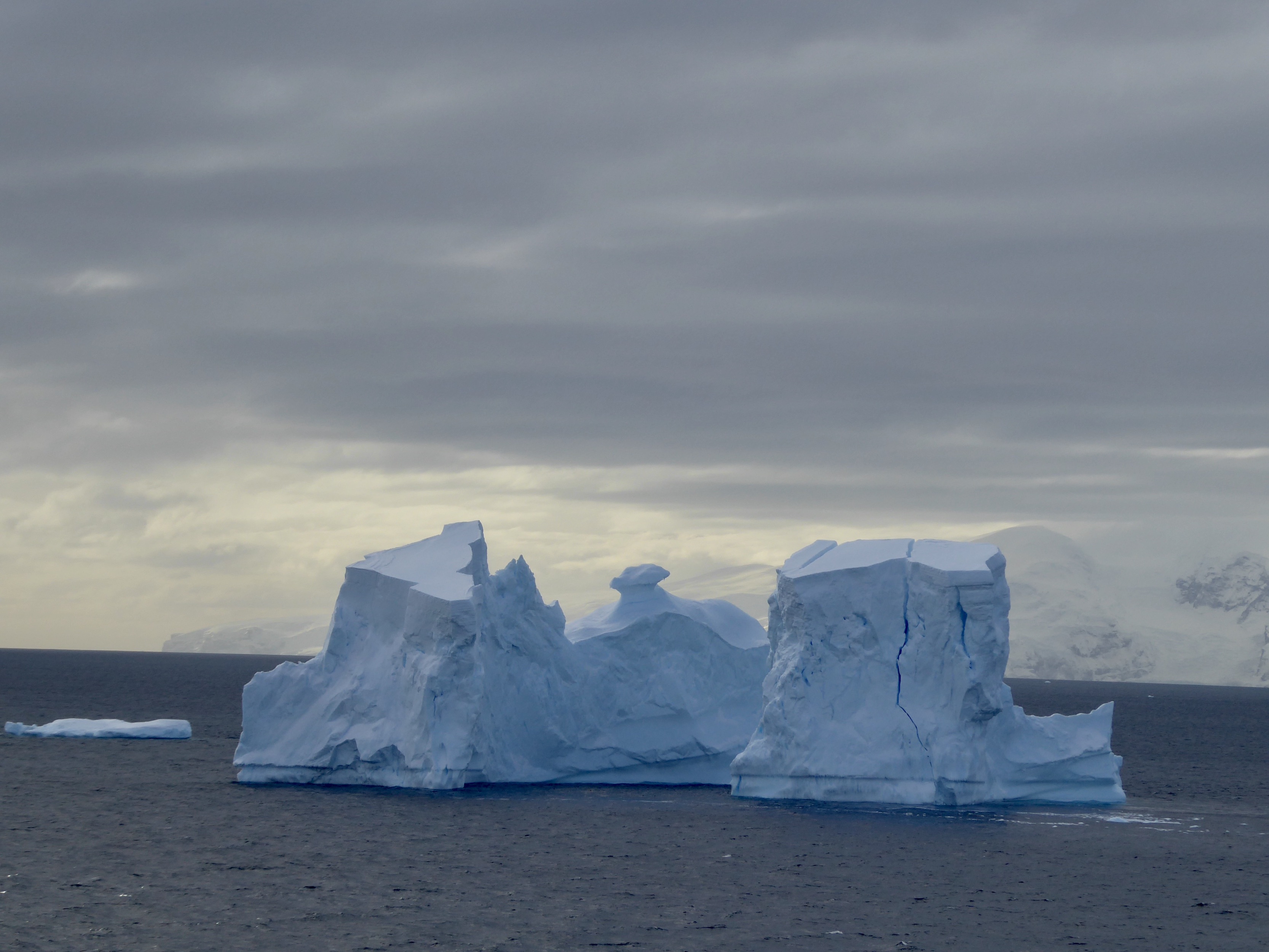 When I was walking around the next-to-upper deck, a nice British lady came up to me to show me a picture she took with her cellphone. It was a bird lying on the top deck, and she asked me to identify it. I didn’t know, but told her and her companion to report it to the Exploration Desk, as they were experts in dealing with seabirds that land on the ship.

I then went to the top deck and they showed me the bird, huddled in a place that was inacessible to normal humans. I couldn’t tell if it was sick or just hitching a ride. It turned out it was neither. The women duly reported it downstairs, and thus saved its life.

That evening, Lancy, our bird expert, explained that this was a beautiful specimen of a Cape Petrel (Daption capense), one of the handsomest sea birds of the Southern Ocean. They’re the only species in the genus Daption, and are extremely common, but none the less beautiful for that.

It turns out, or so Lancy tells us, that many seabirds landing on a solid surface, or land, are unable to take off; for some reason they require water (perhaps they need to paddle to get airborne). Once this bird landed, it couldn’t take off again, and needed to be rescued. Unable to take off, it would starve to death.

Lancy and several team members (we were told; I didn’t see this), first tried to crawl out there and grab the bird, as sometimes they keep them overnight before release. But they couldn’t reach it, so plan B was to simply push it off the edge, hoping it would fall into the water and be able to take off. And that’s apparently what happened, though I’m not sure if the falling bird even hit the water before it began flying. It flew near by the ship for a while, and then flew away. I was very glad that it wasn’t ill. 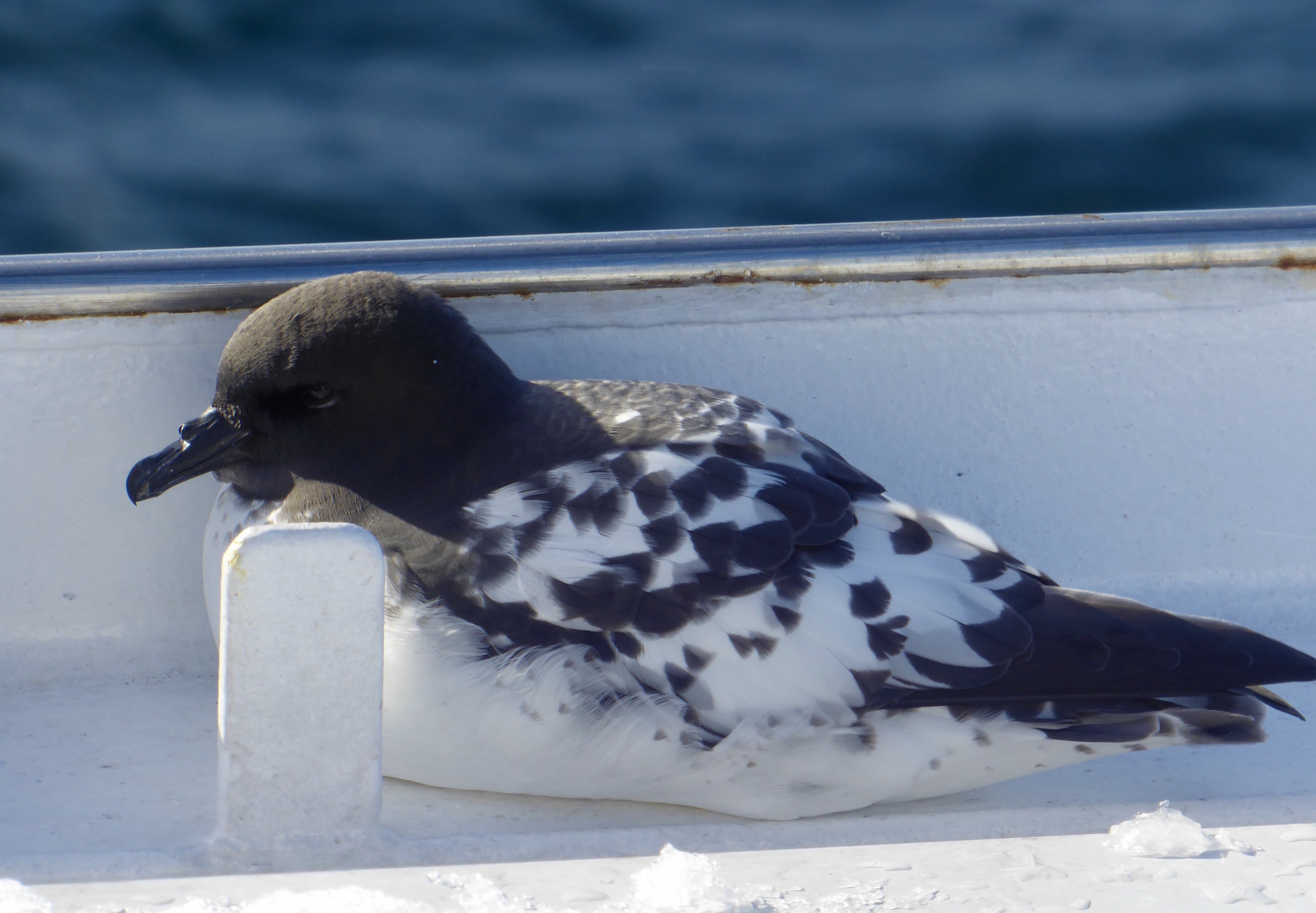 Below: the waters outside the dining room. For some reason I can watch the waves or churning water for hours; it gives me an odd sense of peace.  Whenever I watch the sea, the words of Prufrock come to me:

I have seen them riding seaward on the waves
Combing the white hair of the waves blown back
When the wind blows the water white and black. 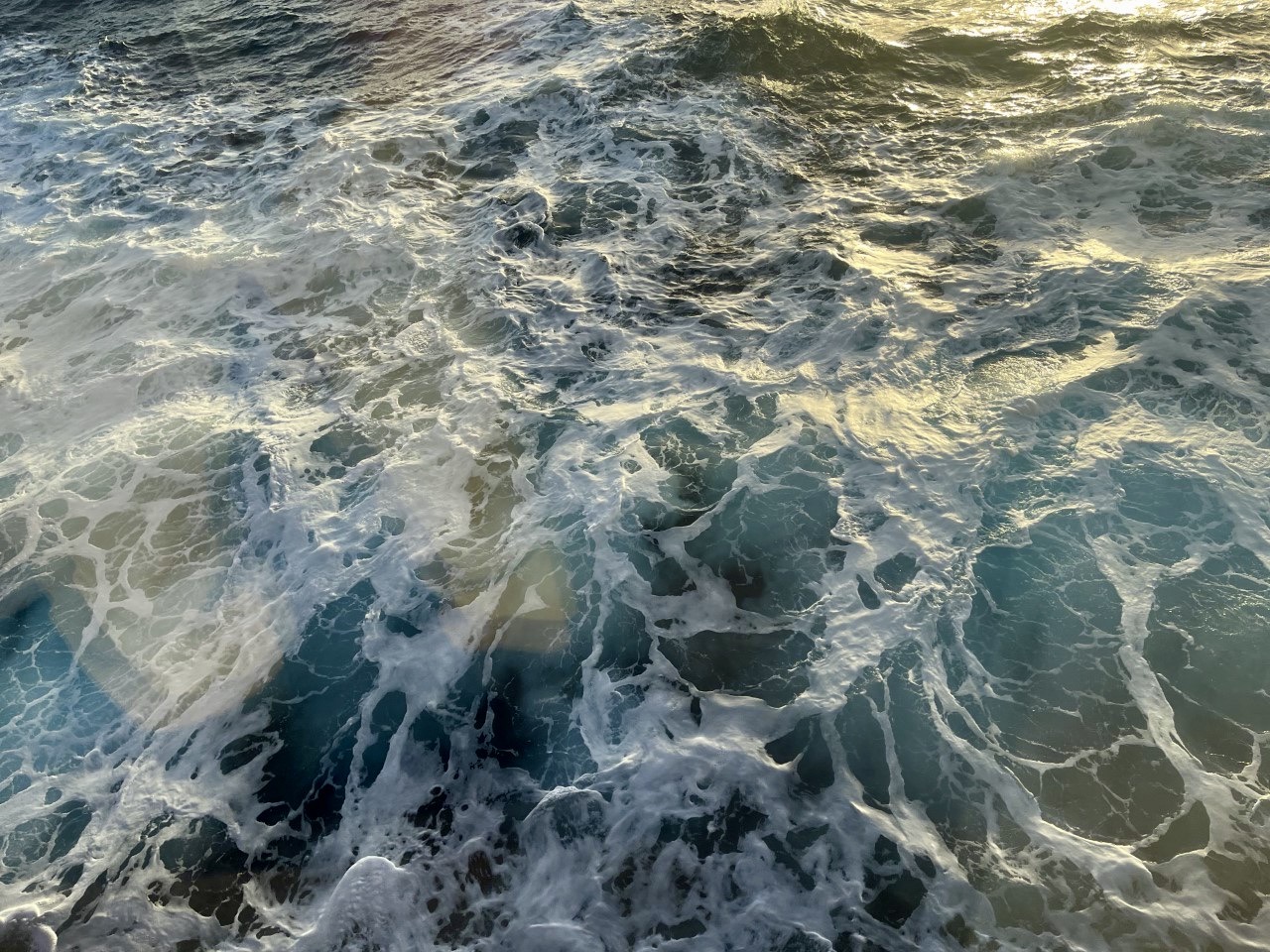 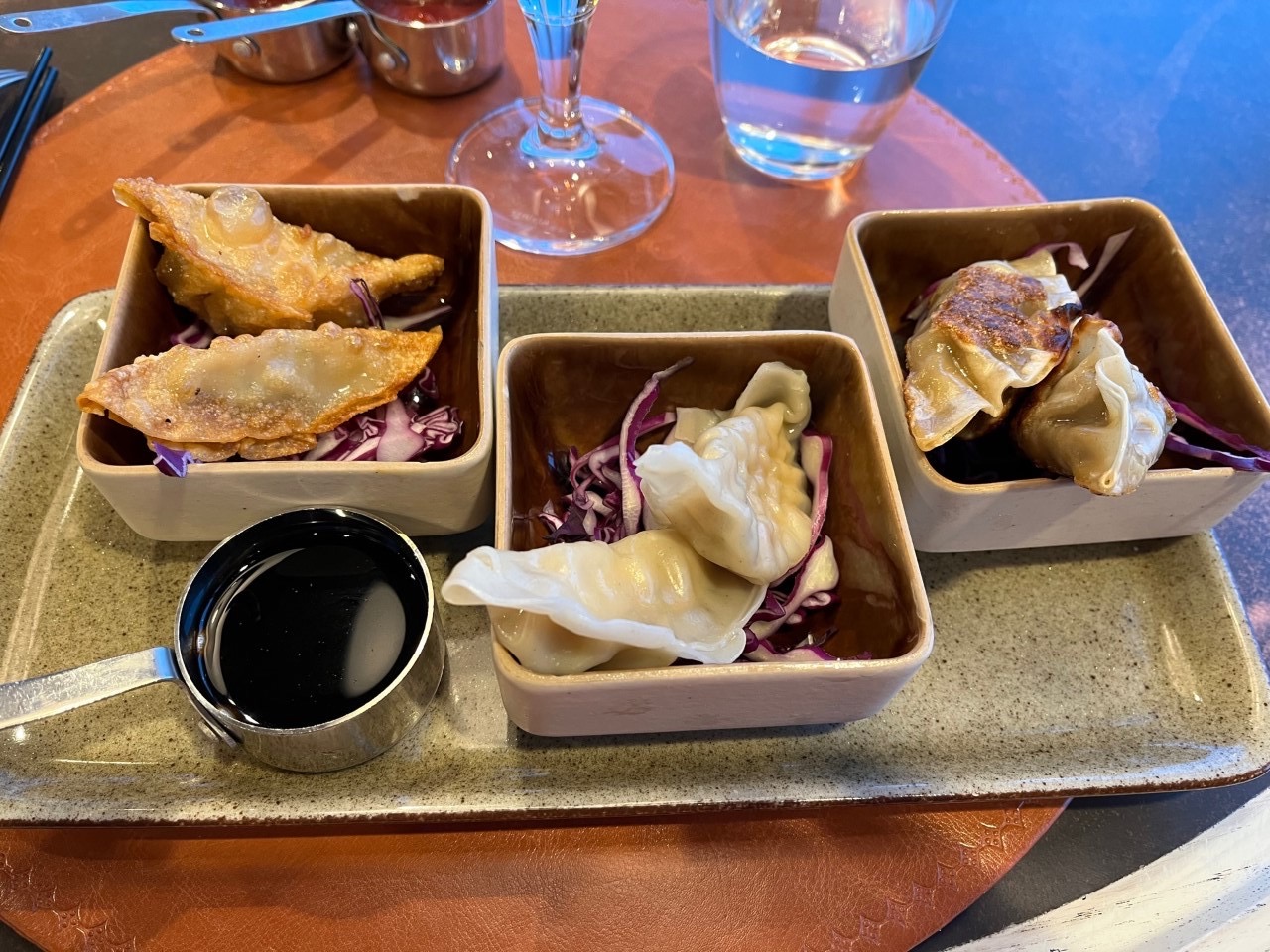 . . . and three steamed buns (beef).  There is almost no vegetarian food in the Fredheim, but sometimes they have chickpea dumplings. I gave them a pass. 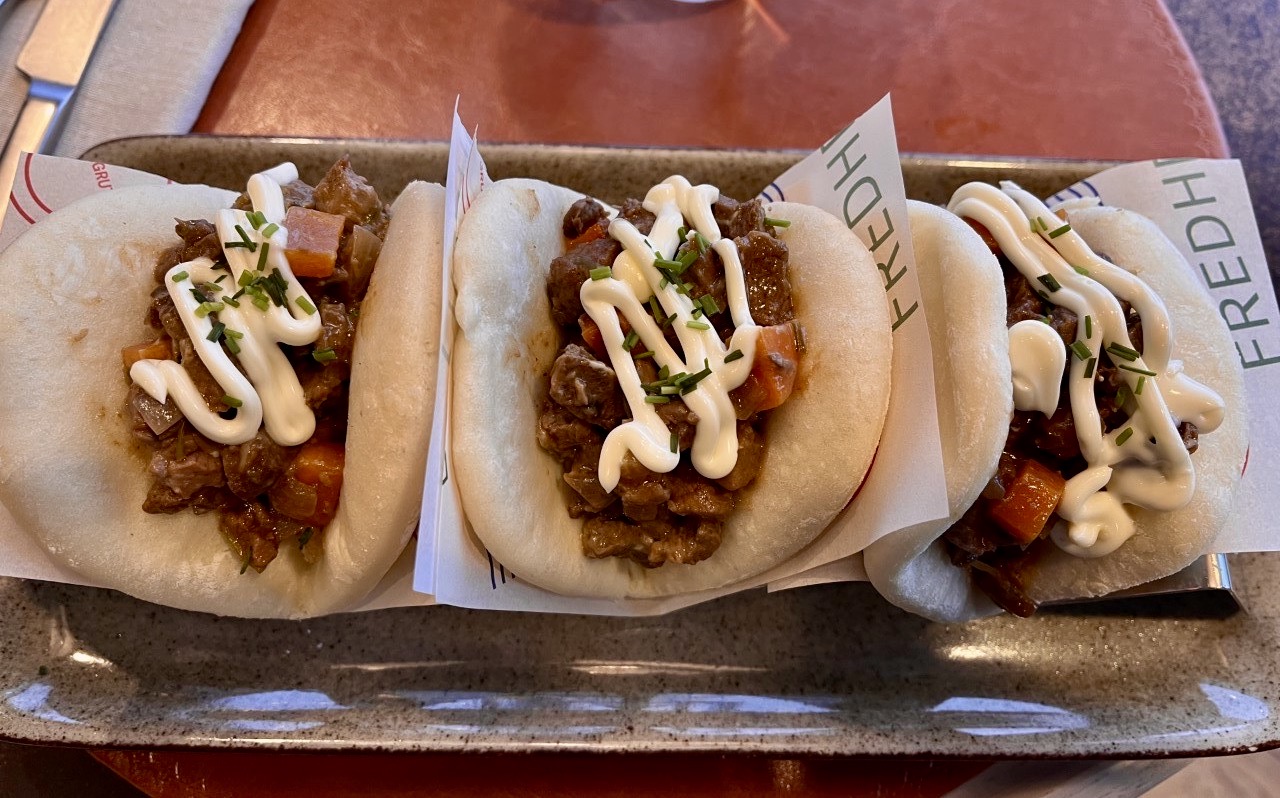 And my favorite dessert, a milkshake (cloudberry this time): 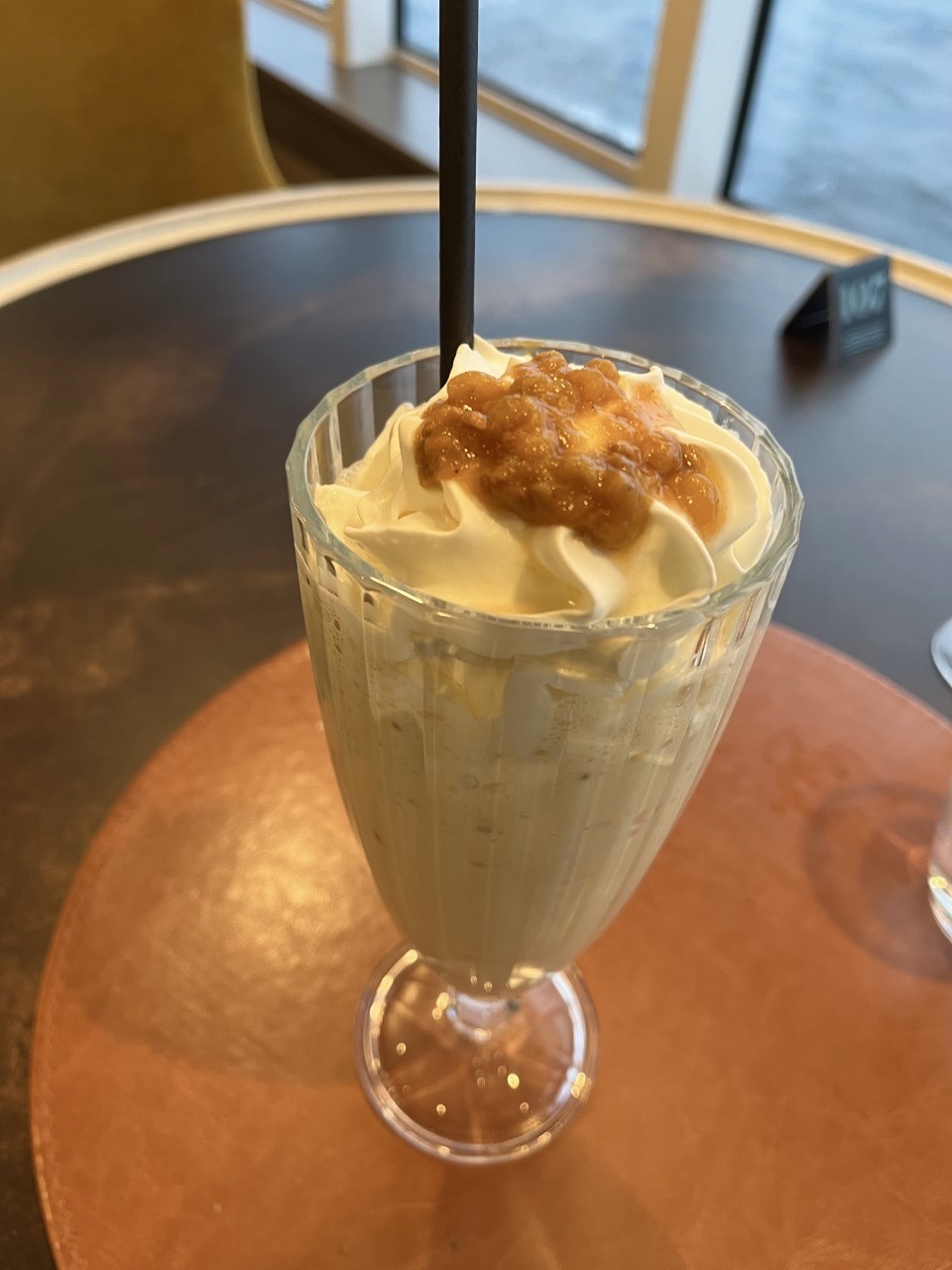 And last night I felt I deserved a burger and fries, so I had the “steakhouse burger” with bacon, cheese, tomato, and lettuce, washed down with the house sauvignon blanc, for which I’ve acquired a taste. I will had to go on a detox regime when I get back to Chicago. 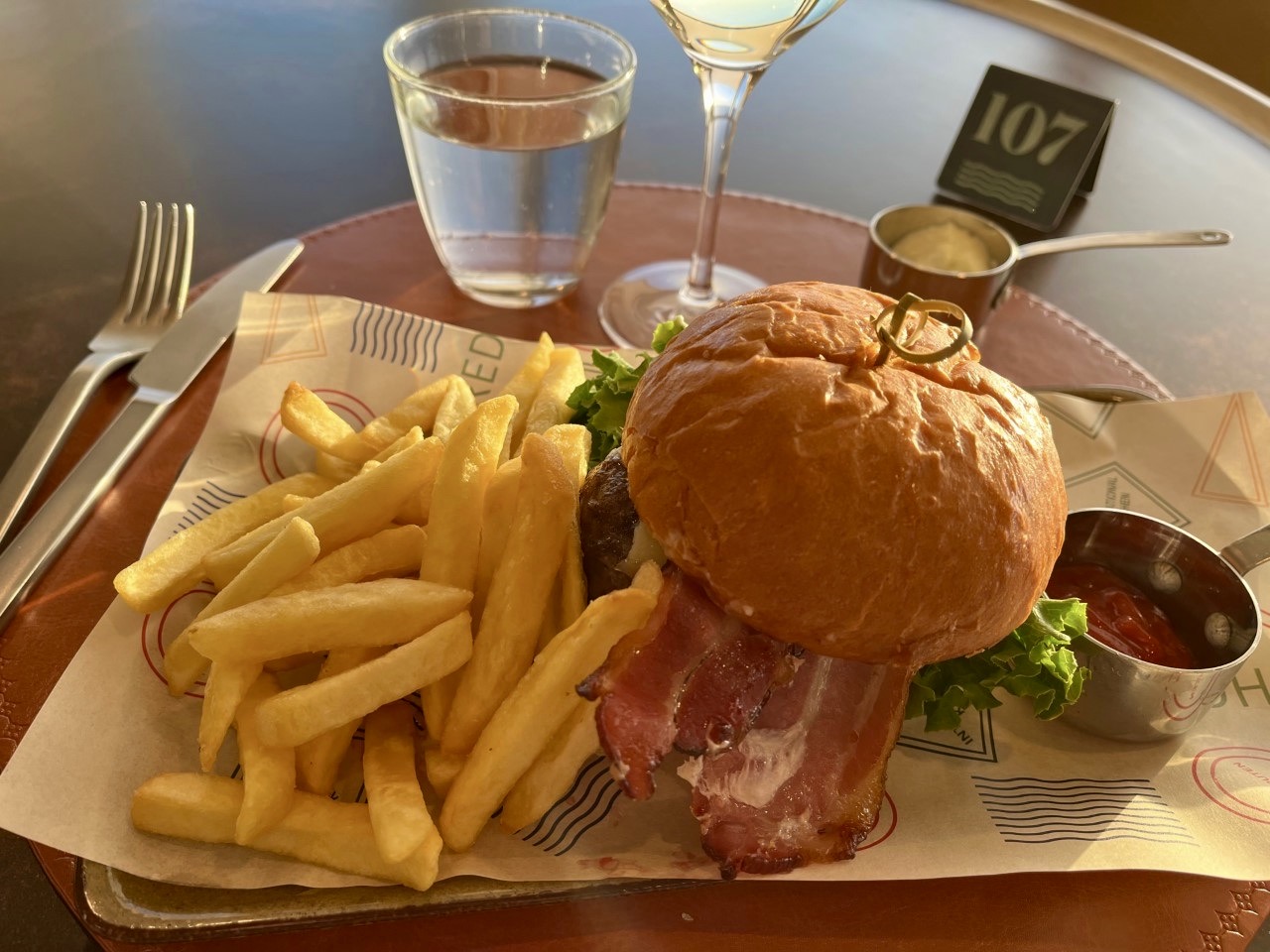 And a strawberry shake for dessert: 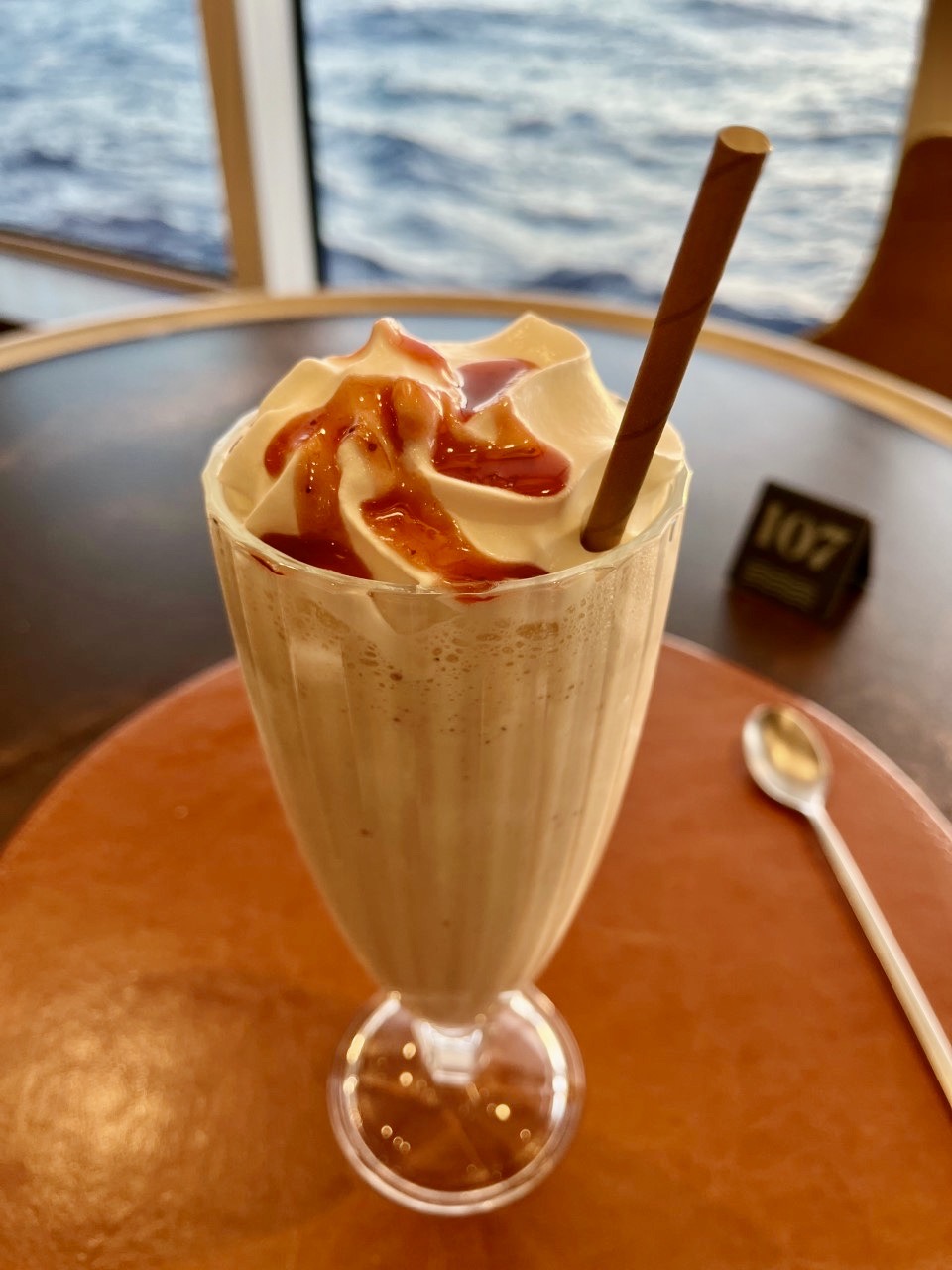 I watched the Sun until it began to sink beneath the sea, hoping to see the vaunted “green flash” that sometimes occurs right when the Sun disappears (it’s actually a green dot that you can see at the aforementioned link). I’ve looked for it many times, but have never seen it.

I regarded Wednesday as my last real day in Antarctica, because that’s the last time I saw its beautiful snow-frosted mountains.

Will I be back next year? I hope so, but even if I don’t go again, I’ve been there twice in my life, and that’s something. 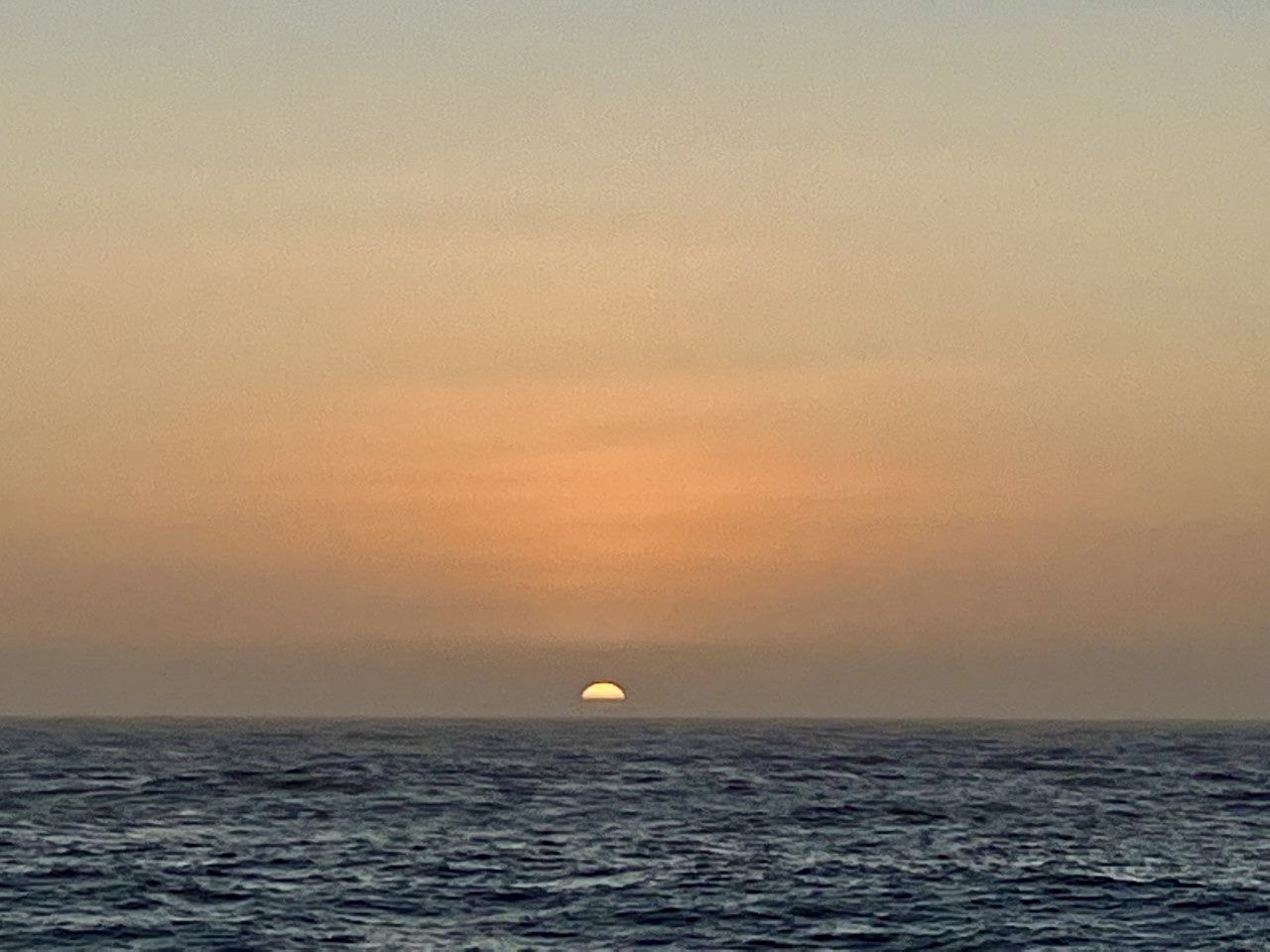 18 thoughts on “Antarctica, day 21b: Leaving and heading north”