Is his latest Substack column, skeptic and science writer Michael Shermer takes up the hot-button issue of  transwomen competing in athletics against biological women—a topic engendered by the latest NCAA victory (there could be two more) of transwoman Lia Thomas. Thomas turned in respectable but not outstanding performances as a biological man competing on men’s teams, but since transitioning to the female gender (after puberty) and joining the Penn women’s swimming team, Thomas has racked up victory after victory.

I’ve discussed this at length, emphasizing the unfairness to biological women of competing against biological men who changed gender after puberty. We now know that the changes in physiology, musculature, and strength of transwomen, even after several years of hormone-restriction therapy, don’t make them equivalent to biological women. They remain superior.

Lia Thomas may be only the first big example, and people say “why beef?—this is just a one-off”, but that’s hard to believe given the number of men transitioning to women (far more than the other way around). This problem will recur, with transwomen having an undeniable athletic advantage over cis-women, and it’s best to address the issue now. Shermer does in the article below, and pulls no punches, as you can see by his title.

Shermer was, by the way, a competitive “ultra-biker” for many years, and knows something about athletics and doping. As the relevant bit of his Wikipedia bio reports:

Shermer has written on the subject of pervasive doping in competitive cycling and a game theoretic view of the dynamics driving the problem in several sports. He covered r-EPO doping and described it as widespread and well known within the sport, which was later shown to be instrumental in the doping scandal surrounding Lance Armstrong in 2010

Click the screenshot below to read; it’s free (but subscribe if you read often). The title alone is guaranteed to bring down the wrath of the internet on Shermer, but the analogy isn’t that far fetched:

First, a photo below, which is captioned:

ATLANTA, GEORGIA – MARCH 17: Transgender woman Lia Thomas (L) of the University of Pennsylvania stands on the podium after winning the 500-yard freestyle as other medalists (L-R) Emma Weyant, Erica Sullivan and Brooke Forde pose for a photo at the NCAA Division I Women’s Swimming & Diving Championship on March 17, 2022 in Atlanta, Georgia. (Photo by Justin Casterline/Getty Images)

This is one picture that says a thousand words. Why should I write more? 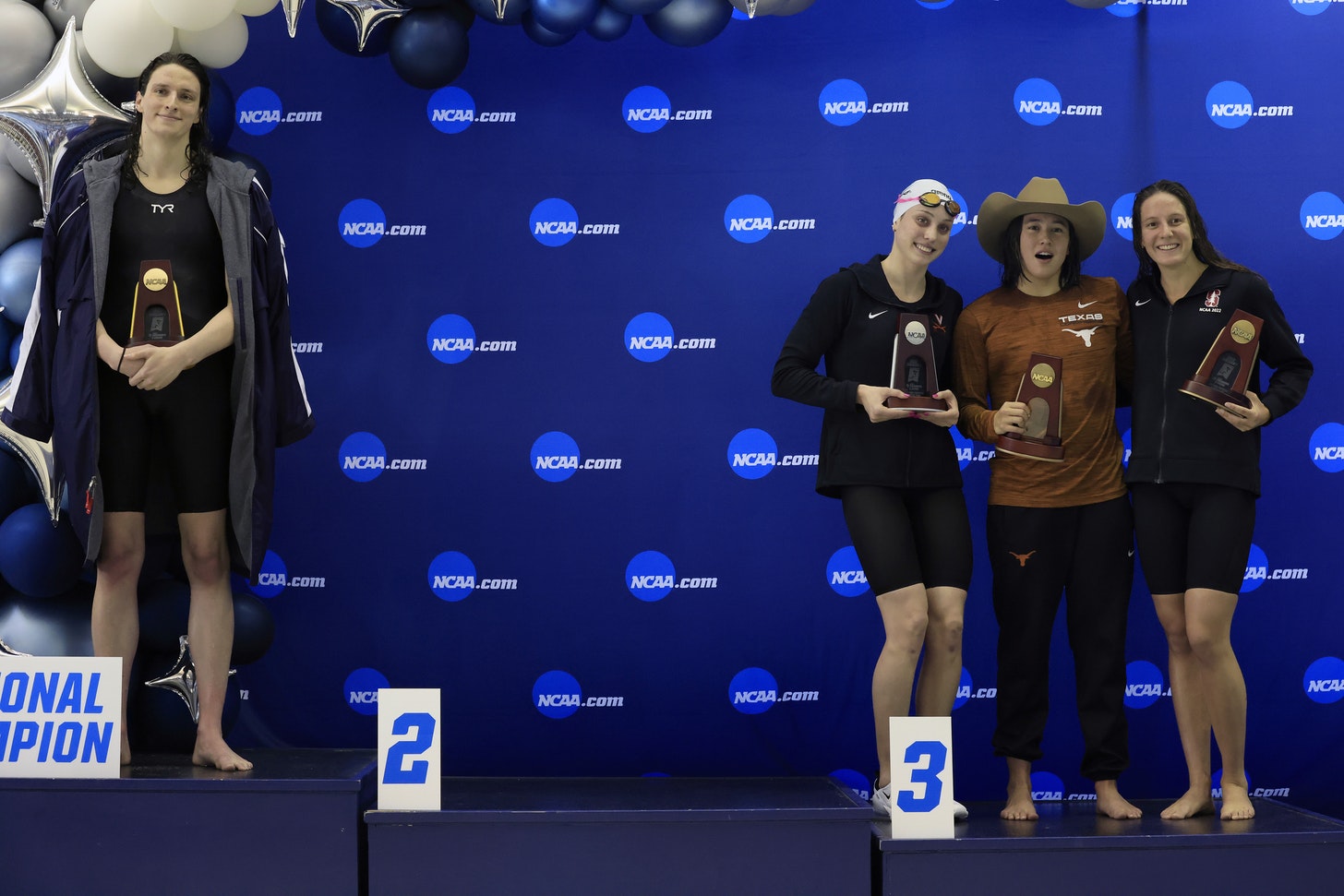 What do you suppose those three runners-up are saying with this pose? Clearly that Thomas’s victory was fundamentally unfair: all biological women are relegated to positions well below Thomas’s #1 slot. Note that they are not on the Penn team, and thus have no reason to support Thomas as a teammate.

Some quotes from Shermer’s piece.

According to Swimming World Magazine, since she transitioned from male to female, and subsequently transitioned from the men’s division to the women’s division in swim meets, Thomas has been “crushing the school records” and “is even rising in the all-time rankings: her 200 free performance makes her the 17th-fastest performer in history, and she is less than three seconds off Missy Franklin’s American record. In the 500 free, she ranks 21st all time.” She’s #1 now among current collegiate swimmers.

This isn’t fair and it has to stop. Athletes who are busted for doping are punished, banned, and in some cases disgraced for life. Trans dopers deserve the same treatment. Not because they’re trans but because they’re dopers.

This is not a trans rights issue. Trans rights are human rights and as such trans people should also be protected from discrimination, and for the most part already are. But blocking a biological male from entering a biological female division in a sports competition isn’t discrimination. It is enforcing Title IX legal protections of discrimination against women, and if not enforced it becomes an assault on the hard-won rights of women in the name of progressive woke ideology masquerading as social justice, equity, and inclusion, which in practice is actually injustice, inequity, and exclusionary. As I concluded my prior analysis of this issue:

Given the centuries-long history of women fighting to be treated equally and to enjoy the same rights and privileges as men, including and especially the hard-won Title IX laws that protect women’s sports, it seems clear to me that we should and must continue to support the rights of biological women unless and until scientific research and athletic performance evaluations make it crystal clear that the two bell curves perfectly overlap, and/or until there are enough transgender athletes to comprise their own athletic divisions.

No, it isn’t really a trans “rights” issue, for whence comes the “right” to compete against biological women over which, as a man who’s gone through puberty, you already have a demonstrated athletic advantage? Saying “trans women are women” does not settle this issue, because they are not equivalent to biological women in this area. And we have no idea how to “level the playing field.”

This is one of those issues where “progressives” are forced to embrace a position that is palpable nonsense, because they must adhere to the “trans women are women” mantra in every sense. If they don’t, they they violate the dictates of trans activism. In this kind of ideology, there is no room for heterodoxy.

But how do you balance the empathy we have for someone who feels they were born as the wrong sex against the unfairness that that such a person can perpetrate on many other people (at least three in the picture above)? The only sensible solution is to either create a third category or have an “open” category in which all trans athletes compete against biological men.

As I’ve said before, this clash of “progressive values” (respect for trans people versus women’s equality à la Title IX) resemble a similar clash: respect for women’s moral and legal equality versus “respect” for the misogyny of Muslim societies, which regularly treat women as second-class or even third-class citizens (much less denigrating LBGTQ people). Women are declared minorities, but so are Muslims, who are seen as “people of color.” And as MacPherson’s Dictum says, “whenever women’s rights clash with other dicta from the Progressive Left, the women will lose.”

And so Shermer concludes that transwomen under no circumstances should a post-pubescent transfemale compete against biological women:

There is a certain game theoretic logic behind the use of Performance Enhancing Drugs (PEDs) in sports (for a full explanation see my Scientific American analysis on “The Doping Dilemma”). What I am arguing here is that being a post-pubescent male—even with the NCAA required one-year of hormone treatment—in a female sports division is a form of doping. Puberty is a Performance Enhancing Drug. The difference here is that when a post-pubescent MTF trans enters the women’s division in a sport, none of the other competitors has that same advantage of puberty as a PED. And short of allowing women to start doping in order to compete with biological men, the playing field is not—and never will be—level.

I understand that the costs of speaking out against this blatant unfairness are high in a culture itching to cancel anyone who isn’t properly woke, and that’s it’s easy for me—a former professional athlete who knows exactly how it must feel to confront such injustice at an un-level playing field—to propose a unified front among athletes, coaches, and especially sports’ governing body administrators to boycott any competition that allows trans doping, but this is precisely what must be done to put an end to this charade. Just refuse to compete and, if it comes to it, watch Lia Thomas swim in the pool alone and collect her unearned trophy at the end and stand alone on the podium as the only competitor in a rigged game.

In the end, he’s right, for the fundamental unfairness is overwhelming. Of course we should treat trans people of any gender with respect, use,the pronouns they prefer, and avoid discriminate against them morally or legally. But there are a few caveats, and sports is one of them. It’s time for us to stop being cowed by fear of being deemed a “transphobe”, and stand up for the three women on the right in the picture above—and all the women athletes they represent.

It is not transphobic to call for this kind of fairness. Although Shermer (and I) will get opprobrium for this, that comes with the territory. The unfairness won’t stop until people stop being cowards about the word “transphobe” and stop praising Lia Thomas’s victories as a sign of her courage. While her transition was courageous, her victories are the sign not of courage but of male puberty.

(Shermer has an earlier column on the same issue, concentrating on the ethical issues.)