John Horgan’s opinion piece on the physics theory of “superdeterminism” (which we’ve encountered before in a video by Sabine Hossenfelder), and its relevance to free will, appeared in the latest Scientific American. Click to read the short piece: 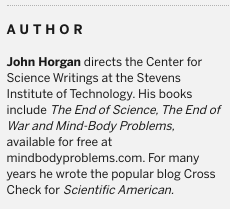 Although I had (and still have) trouble understanding superdeterminism, it is, as Horgan and Sabine explain, a way that quantum mechanics becomes deterministic rather than fundamentally indeterministic. To use the jargon of Bell’s Theorem, superdeterminism is a theory of “local hidden variables”, so that factors we don’t yet understand actually determine absolutely how particles behave. As Horgan notes:

Einstein, who derided nonlocality as “spooky action at a distance,” insisted that quantum mechanics must be incomplete; there must be hidden variables that the theory overlooks. Superdeterminism is a radical hidden-variables theory proposed by physicist John Bell. He is renowned for a 1964 theorem, now named after him, that dramatically exposes the nonlocality of quantum mechanics.

As I wrote in response to Hossenfelder’s video:

I’m not quite sure what “superdeterminism” means is on the level of particles, but it appears to be something like this: “What a quantum particle does depends on what measurement will take place.” And once the measurement system is specified, somehow a quantum particle is determined to behave in a certain way. That’s what I don’t get.

And Horgan seems as puzzled as I am, even though Hossenfelder says that superdeterminism may be empirically testable. Back to Horgan:

I’m nonetheless baffled by superdeterminism, whether explicated by Hossenfelder or another prominent proponent, Nobel laureate Gerard t’Hooft. When I read their arguments, I feel like I’m missing something. The arguments seem circular: the world is deterministic, hence quantum mechanics must be deterministic. Superdeterminism doesn’t specify what the hidden variables of quantum mechanics are; it just decrees that they exist, and that they specify everything that happens, including my decision to write these words and your decision to read them.

Hossenfelder and I argued about free will in a conversation last summer. [JAC: this discussion is on YouTube and I can’t watch it from down here.] I pointed out that we both made the choice to speak to each other; our choices stem from “higher-level” psychological factors, such as our values and desires, which are underpinned by but not reducible to physics. Physics can’t account for choices and hence free will. So I said.

But as most of us know, even if there are fundamental indeterminacies lurking in quantum physics, and while deterministic physics rules macro-level phenomena, there is still no such thing as libertarian free will. Whether or not an electron jumps in an indeterminate way, and that makes you decide to do one thing or another—this does not mean you have libertarian free will. To enable that, your conscious will must have made that electron jump and, as Sean Carroll has pointed out, that itself violates what we know about the laws of physics. So long as the laws of physics are obeyed, be they deterministic or indeterministic, we cannot have libertarian free will. Yet Horgan seems to think that that kind of free will can exist; we just don’t understand enough about nature to know how and why.

The analogy here is to our current lack of current understanding abut how neurobiology leads to the phenomenon of consciousness. This lack of understanding is taken by some, like Philip Goff, to mean that we’re missing something beyond current laws of physics: the ability of electrons, atoms, and so on, to have a form of consciousness (this idea is called “panpsychism,” and I consider it both foolish and untestable).

Likewise, the fact that we have emotions and consciousness and feelings that can alter the world (again, this is a fact regardless of the truth of superdeterminism) leads Horgan to the idea that there may be libertarian free will. He thinks that we just don’t understand enough physics yet:

. . . To my mind, the debate over whether physics rules out or enables free will is moot. It’s like citing quantum theory in a debate over whether the Beatles are the best rock band ever (which they clearly are). Philosophers speak of an “explanatory gap” between physical theories about consciousness and consciousness itself. First of all, the gap is so vast that you might call it a chasm. Second, the chasm applies not just to consciousness but to the entire realm of human affairs.

Physics, which tracks changes in matter and energy, has nothing to say about love, desire, fear, hatred, justice, beauty, morality, meaning. All these things, viewed in the light of physics, could be described as “logically incoherent nonsense,” as Hossenfelder puts it. But they have consequences; they alter the world.

Physics as a whole, not just quantum mechanics, is obviously incomplete. As philosopher Christian List told me recently, humans are “not just heaps of interacting particles.” We are “intentional agents, with psychological features and mental states” and the capacity to make choices.  Physicists have acknowledged the limits of their discipline. Philip Anderson, a Nobel laureate, contends in his 1972 essay “More Is Different” that as phenomena become more complicated, they require new modes of explanation; not even chemistry is reducible to physics, let alone psychology.

This, and the paragraph below, are truly begging the question of naturalism and free will: assuming the existence of a phenomenon we want to prove—libertarian free will. We are “intentional agents” with “the capacity to make choices”, What Horgan is ignoring here is whether or not those choices are determined by the laws of physics. They may look like true choices that could have been made otherwise via conscious will, but that’s an illusion.

And the last paragraph seems to show that Horgan truly is afflicted with confirmation bias.  To Horgan, the known and unknown laws of physics, and their relevance to free will, is a non-issue. Our wills must truly be free—and not deterministic—because  because the implications are just too depressing. Horgan:

. . . Why does the debate over free will and superdeterminism matter? Because ideas matter. At this time in human history, many of us already feel helpless, at the mercy of forces beyond our control. The last thing we need is a theory that reinforces our fatalism.

What we need is the truth, not a view of science that buttresses our emotional desires.

In the end, the debate between superdeterminism or quantum mechanics is irrelevant here. All that’s relevant is whether the known laws of physics apply to all matter. There is no evidence that they don’t, and some evidence (viz., Sean Carroll’s arguments) that they do, at least to “everyday life.”

In other words, Horgan wants there to be libertarian free will, and so he thinks that we’re simply missing the physics that allow this to be true. I happen to disagree, and I think that most physicists and philosophers will agree with me. Even compatibilist philosophers, after all, still think that libertarian free will is wrong, and our “choices” are absolutely determined by the laws of physics. They just conceive of free will in a manner that is compatible with the laws of physics.

40 thoughts on “John Horgan on free will and superdeterminism”