Where we are now:  According to the Roald Amundsen’s real-time tracker, we have headed around to the East Side of the Antarctic Peninsula, where the Weddell Sea lies.  We are near the spot where Shackleton’s ship, the Endurance was trapped in the ice and destroyed in 1915, a prelude to one of the greatest adventures and feats of derring-do in the history of exploration. Using drones, explorers found the ship on the sea floor a few days ago( (see photos below).

Our current position and a general map of Antarctica.

The blue line marks our route so far. We are headed for Brown Bluff, a touristic landing spot right to the south of the ship in the first graphic. It usually harbors Adelie penguin colonies but there will probably be few at this time of year. 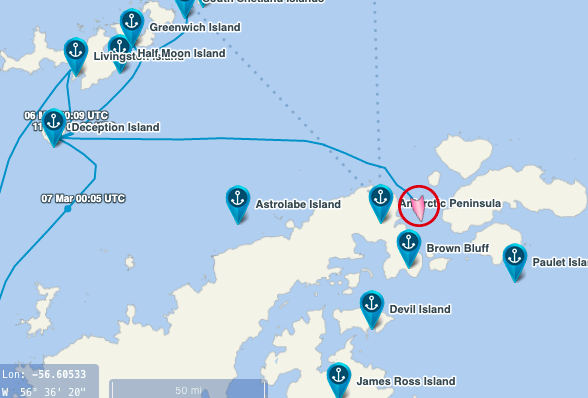 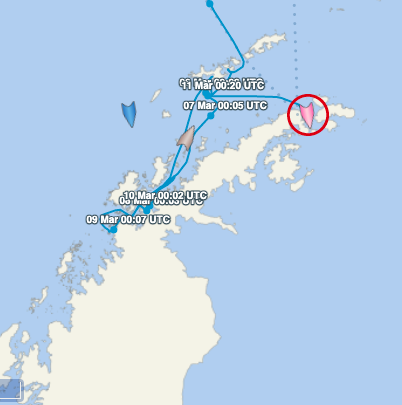 From my cabin I see a island nearby, perhaps one of the several islands off the tip of the Peninsula (see above). This area is supposed to be rife with large icebergs, but we’re not yet in that area: 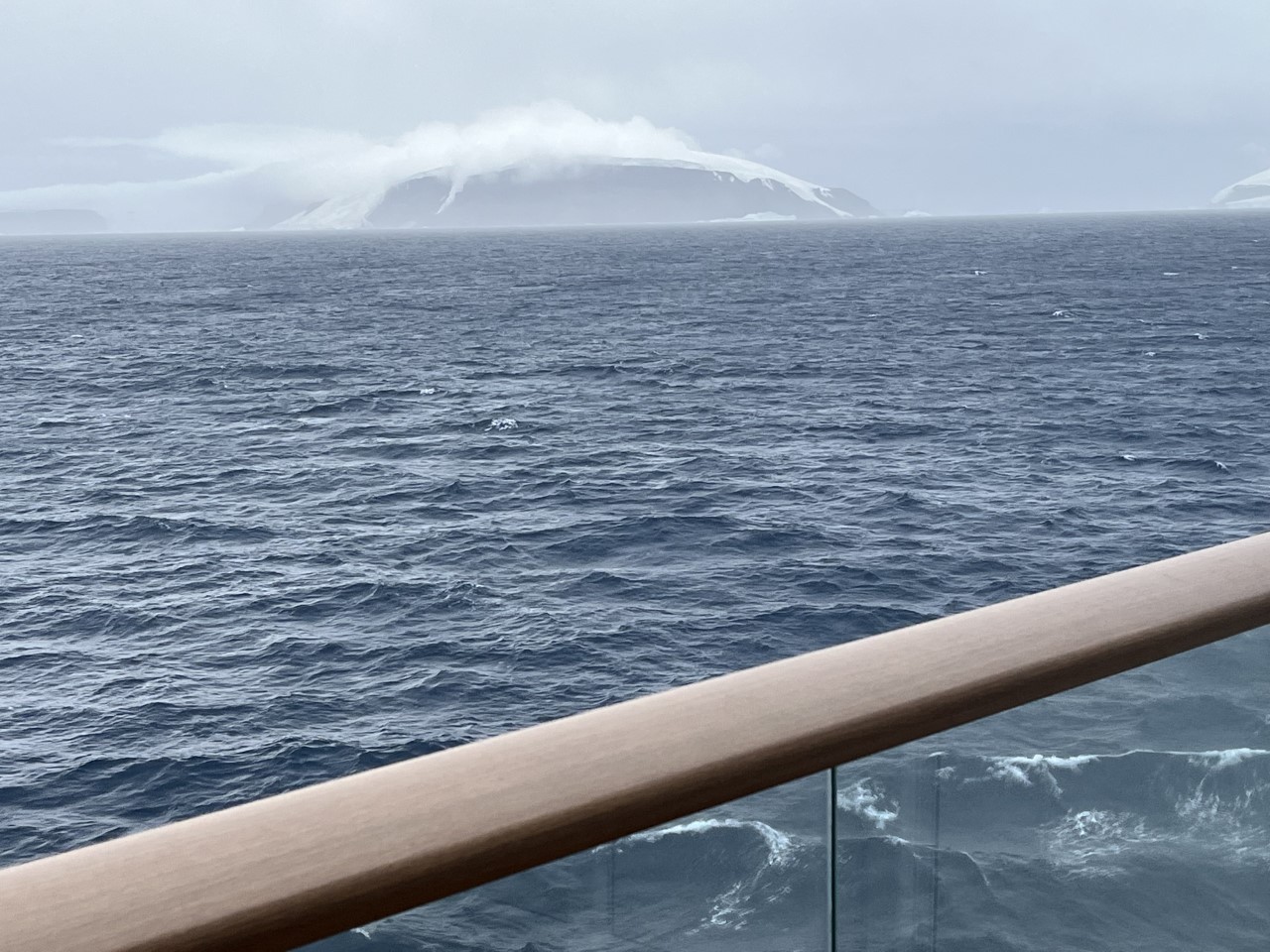 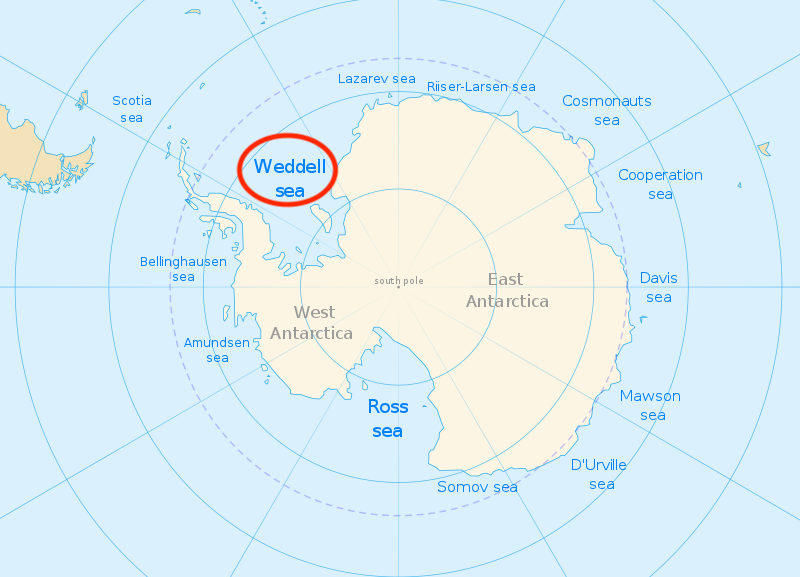 A map from the BBC showing where the ship’s remains were found (yellow rectangle), about 10,000 feet down. The escape rout of the men to Elephant Island, on the west side of the Peninsula, is shown by the first segment of white dashes, and Shackleton’s small party’s voyage of over 1000 km to seek rescue on South Georgia is the second segment of the white dashes: 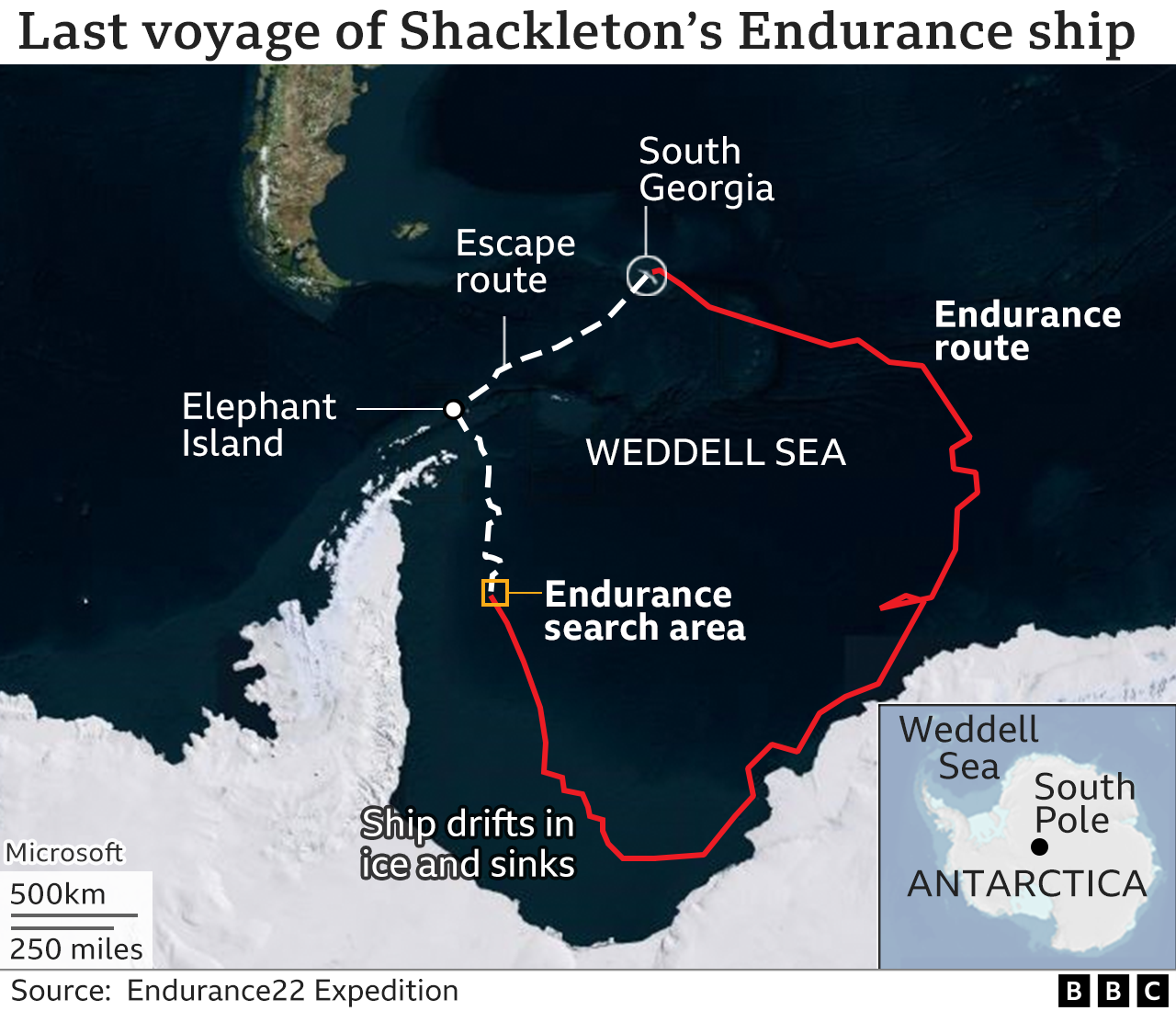 Photos of the remarkably well preserved ship (the waters are cold and there are no wood-boring organisms in the area. Captions from NYT:

Trapped in the sea ice, the Endurance drifted some distance before it was finally crushed and sank where I’ve placed the arrow. The Peninsula is to the left. 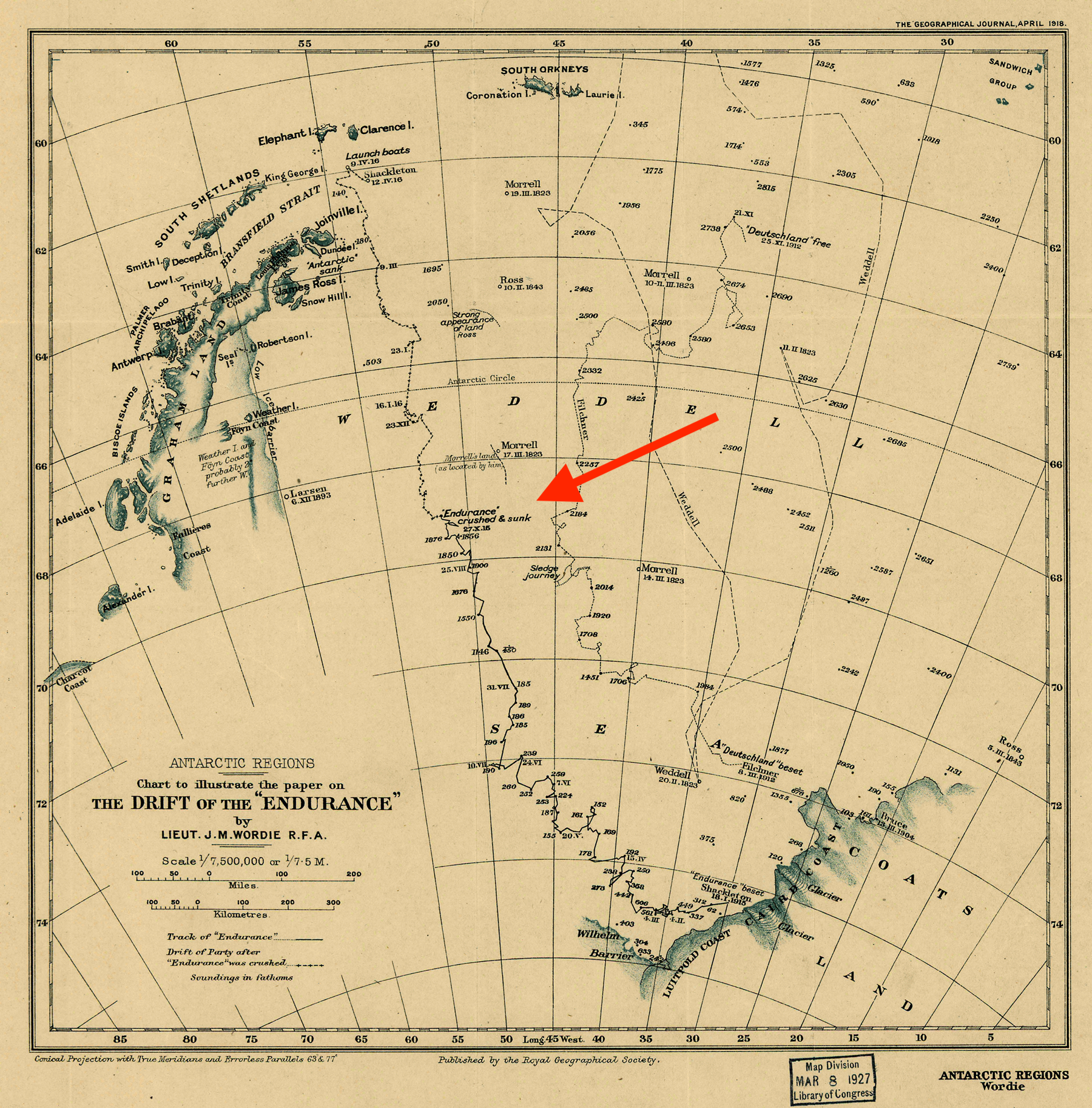 Finally, the dogs watching the crushed ship right before it sank. They shot all those dogs, as well as the ship’s cat Mrs. Chippy. (See my post on that intrepid tabby here.) 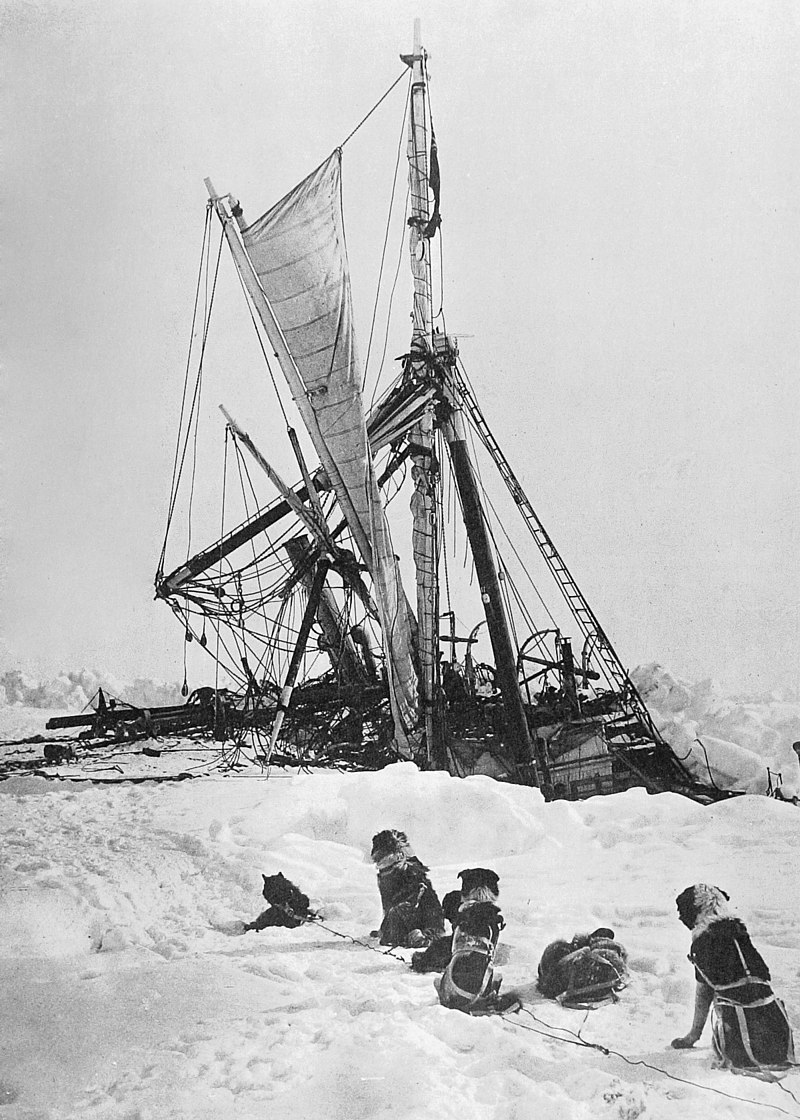 So, good morning on Friday, March 11, 2022, and National “Eat Your Noodles” Day. But why the scare quotes? Are we supposed to pretend to eat noodles?

*I see in the news that the Russians have intensified their bombing of Ukraine, and are preparing for the big assault on Kyiv, surrounding the city and firing at nearby towns. From the NYT

Is there anybody here who thinks that the brave Ukrainians can stave off the much larger Russian force, hapless though the Russians may be? They simply have too many fighters, too many weapons, and a bloodthirsty President who wants that country.

*Imprisoned dissident Alexsai Navalny has called for increased street demonstrations against the war in Russia, and, at the southern border of the U.S., there is an increase in attempted immigration by Russians and Ukrainians seeking asylum. And, unlike the claims of Hispanics, these ones are being granted far more often:

Russians and Ukrainians represent only a small fraction of all the people crossing the southern border. But unlike most migrants from Mexico and Central America, who have often been turned away since the beginning of the pandemic, they are being allowed to make asylum claims at ports of entry. And while a vast majority of asylum cases are ultimately denied, two-thirds of those from Russia and Ukraine have been winning their cases, according to government data analyzed by the Transactional Records Access Clearinghouse at Syracuse University.

Between June and Feb. 21, with the exception of one week, Russians were among the top-three nationalities assisted by the San Diego Rapid Response Network, which offers food and lodging to migrants after their release from U.S. border custody. The network has also been receiving a small but growing number of Ukrainians, and the volume is expected to increase in the aftermath of Russia’s invasion, assuming access to Mexico remains relatively easy.

“This is about to become a torrent,” said Lou Correa, a Democratic representative from California who recently testified in Congress about what he witnessed at the San Ysidro port of entry near San Diego. “You are going to have destitute Ukrainians and hungry Russians.”

I’m not sure whether the greater success of claims from Russians and Ukrainians reflects some kind of anti-Hispanic bias on the part of our government, or the feeling that claims of political persecution by Russians (mostly dissidents like Navalny) are simply more credible than claims by Hispanics, who often migrate for economic reasons rather than fear of persecution.

Guatemalan lawmakers have passed a sweeping new bill mandating up to 10 years of jail time for women who obtain abortions, explicitly banning same-sex marriage and preventing schools from teaching about sexual diversity.

The measure, which was approved Tuesday and is expected to be signed into law by Guatemala’s conservative president within weeks, would impose the harshest punishment for abortion of almost any country in Latin America. It bucks the trend toward broadening access to the procedure throughout the region in recent years.

But this isn’t really anything new, except for the ban on teaching about sexual diversity:

Guatemala already mandated prison time for anyone who got an abortion, except in cases where the woman’s life was at risk, and same-sex couples have never been allowed to marry in the country. But for the president, the new bill carries symbolic weight, analysts said.

But the prison time is also increased. I cannot fathom jailing a woman for ten years for getting an abortion, even in cases of rape and incest. El Salvador and Honduras have similar laws. Guatemala’s corrupt President, Alejandro Giammattei, has declared that part of his agenda is to make Guatemala the “pro-life” capital of Latin America. But how is banning homosexual marriages in any sense “pro-life.” Do they think that all the gays who can’t marry will marry those of the other sex by default, and then have kids?

*Finally, actor Jussie Smollett is finally gong to jail for his fabricated claim of being attacked by two assailants in Chicago—and a noose put around his neck—for being black and gay. Charges weren’t filed by the Chicago district attorney earlier, to the outrage of many who saw through Smollett’s palpable lies. Now, however, after a real trial before a judge alone, Smollett has been convicted of filing a false police report (felony disorderly conduct). He could have gotten three years in prison, but has been sentenced to five months in jail. He also got two years of probation, a fine of $25,000, and must pay $120,000 to cover the costs of the police investigation.

At the end of a hearing that lasted about five hours, Judge James B. Linn excoriated Mr. Smollett from the bench, saying that he had concluded that the actor had premeditated the hoax and that despite his and his family’s admirable past work in social justice, he had an arrogant, selfish side and had planned the stunt because he “craved the attention.”

In the searing speech, the judge said that Mr. Smollett’s name had become synonymous with lying, that he had sought to throw a “national pity party” for himself and that Mr. Smollett’s conduct had undermined other victims of hate crimes at a sensitive time, as America was trying to climb out of its painful history of racism.

“You took some scabs off some healing wounds and you ripped them apart,” the judge said. “And for one reason: You wanted to make yourself more famous.”

Despite the overwhelming nature of Smollett’s hoax, so stupidly conducted that there was an unbreakable chain of evidence (and see Dave Chappelle’s mockery of Smollett’s claims), Smollett still says he is the victim:

. . . after Judge Linn read his sentence, the actor defiantly stood up and declared, “I did not do this, and I am not suicidal,” adding that “if anything happens to me when I go in there, I did not do it to myself.” As he was taken into custody to begin his jail sentence, Mr. Smollett raised his right fist. His lawyers immediately said they planned to appeal.

Go to the March 11 Wikipedia page to find notable events, births, or deaths that happened on this day, and then report your favorites in the comments. Reader Jez seems to do this very well.

Meanwhile in Dobrzyn, Kulka is happy that her staff has arrived:

Can you tell Kulka from Hili? 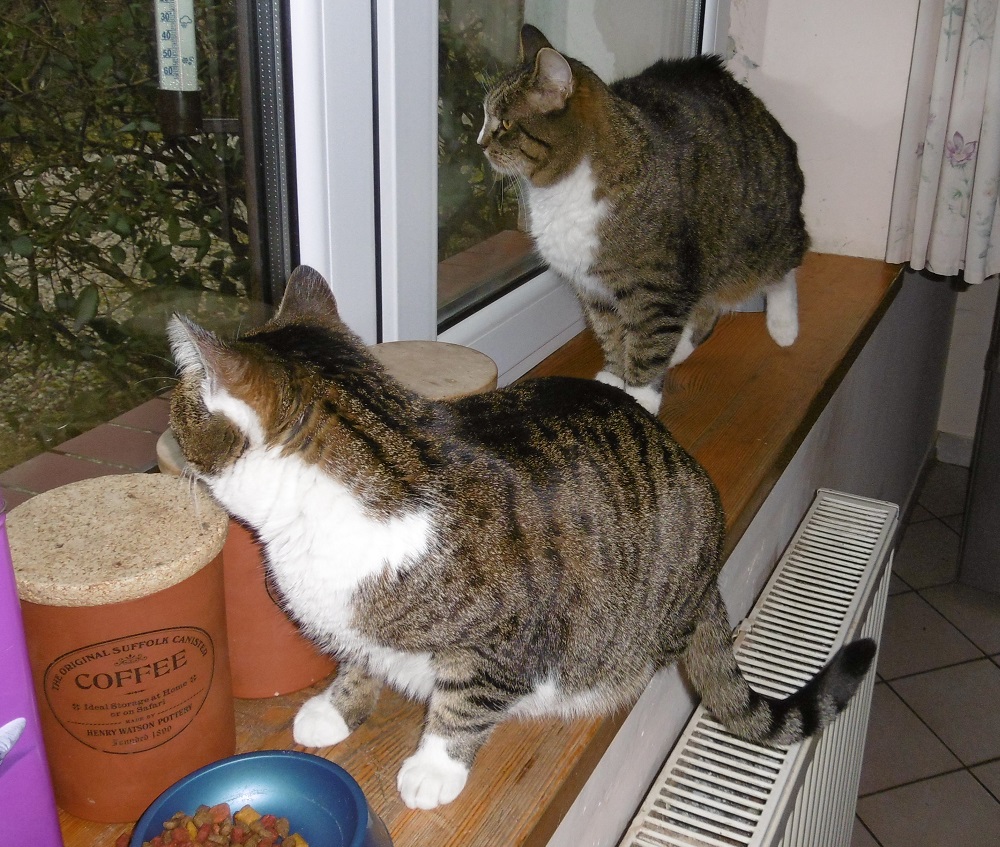 From Divy. The artist forgot to mention that Noah didn’t let amphibians, freshwater fish, reptiles, or mammals off on distant oceanic islands, either, though he did on islands that, seem to have once been connected to continents. (That’s some of the most powerful evidence for Darwin’s theory of evolution, as laid out in the biogeography chapter of Why Evolution is True.) 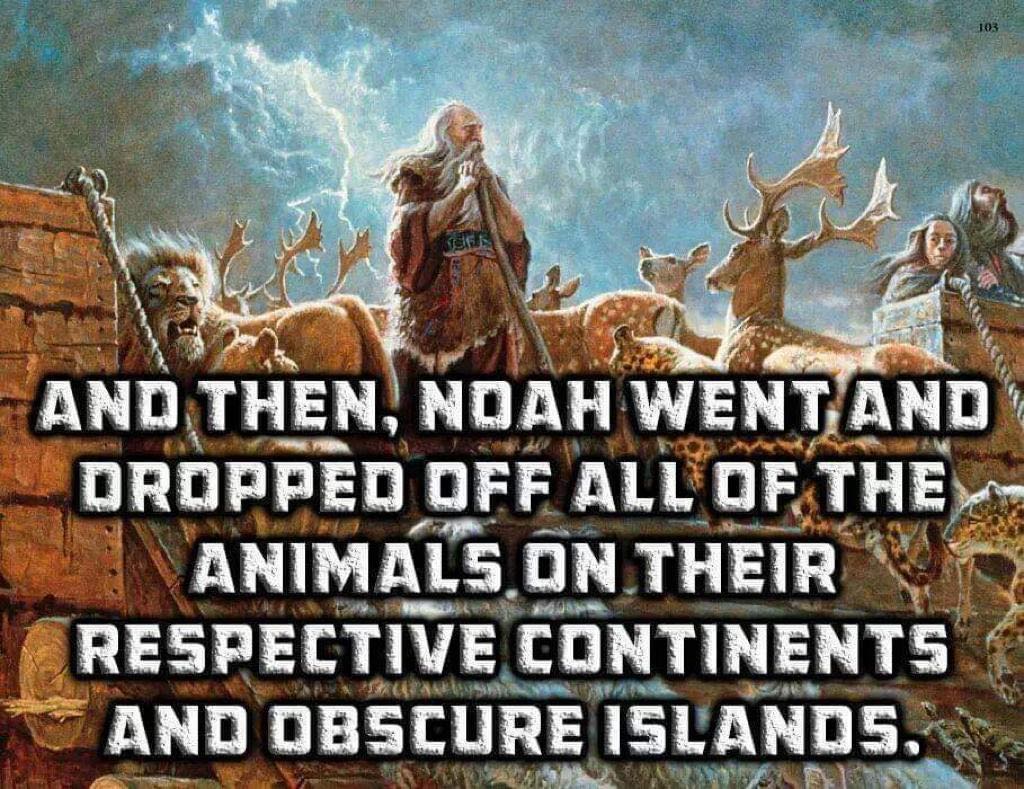 But I blessed Venezuela, Saudi Arabia, Iran, Russia and Libya with much more.

Because I love them more. https://t.co/lWel7kNlIO

Tweets from Matthew. Where will Igor sell his tank?

Every morning Igor goes for a stroll through the nearby forest.

Remember this brave woman? She’s still out there. The Russians dare not imprison a survivor of the Leningrad siege, who is in her nineties:

Remember the recently detained Yelena Osipova, who survived the siege of Leningrad? She's back in action, protesting publicly in St Petersburg
"🇷🇺 soldier, drop your weapon – and you'll be a real hero!"
Banners are painted by herself.
Don't know about you, but we love her! 💙💛 pic.twitter.com/XMVC0MvWaV

Towards the end of this video, you’ll learn why these Russian tactics aren’t new.

If you don't recognise these tactics, then you haven't been paying attention. From Kharkiv's frontline, #Ukraine @dcinfocus and Feras. With thanks to our local team. @BBCNews @BBCWorld Graphic content warning. pic.twitter.com/hhGK1tudpp

Matthew says this: “You need to enlarge the image. Note the design of the two posters and the summary in the blue band on the poster on the right. . . ”

Some people are just too damn smart pic.twitter.com/YvZgFbqImD

This is a badly misshapen Drosophila eye, but I don’t know if it’s a mutant or a nongenetic deformity.

I thought it was a strange spontaneous mutant but my lab says it’s a just missed Valentine’s Day opportunity #fruitflyart pic.twitter.com/2i1PfBbSj5

A stunning and instantaneous transformation. Squid are fantastic.

Enjoy this. Squids use tiny organs in their skin called chromatophores. Each chromatophore is a tiny sac filled with pigment. Small muscles tug on the sac, spreading it wide. If muscles relax, colored areas shrink back into tiny spots. https://t.co/58TxcfjMH9

Do you know the gruesome story of the tongue-eating louse? Look up the story on the Wikipedia article about Cymothoa exigua. Wikipedia says this: “This is the only known case of a parasite assumed to be functionally replacing a host organ.”

You have seen the photos, but have you ever seen a live tongue replacement isopod? Here for the very first time ever, the famous isopod Ceratothoa famosa making her moves! @WepenerVictor @WynandMalherbe @GnathiidGnation @Bernd_AquatEcol pic.twitter.com/8H9FSMt33U