Well, I’ll learn it at least insofar as the 23andMe tests are accurate. I guess they did get usable DNA out of my second sample, and so the genetic analysis will be coming very shortly, probably when I’m in Antarctica. (I opted out of the genetic health information as I’m neurotic.)

My prediction:  96% Ashkenazi Jew, 4% Neanderthal. The big question is whether there’s any Irish at all in my genome given that one or more of my distant ancestors may be Irish.

Here’s a diagram of what I know of the ancestry on my father’s side (on my mother’s it’s Jewish all the way down.) Below the diagram is what I wrote four years ago after showing my paternal family tree (“Floyd Coyne” was my dad), with information provided by my cousin Jeffrey. Jeffrey was the son of my dad’s half brother Jack. My dad’s birth mother, whom I believe was named “Rose Bloom”, died shortly after he was born, during the influenza epidemic in 1918. His father Joseph remarried.

My father was apparently badly treated by his stepmother and never spoke of her. And he was estranged from his half brother Jack until they reconciled in Sacramento when my folks visited me as a postdoc in Davis, California (early 80s). 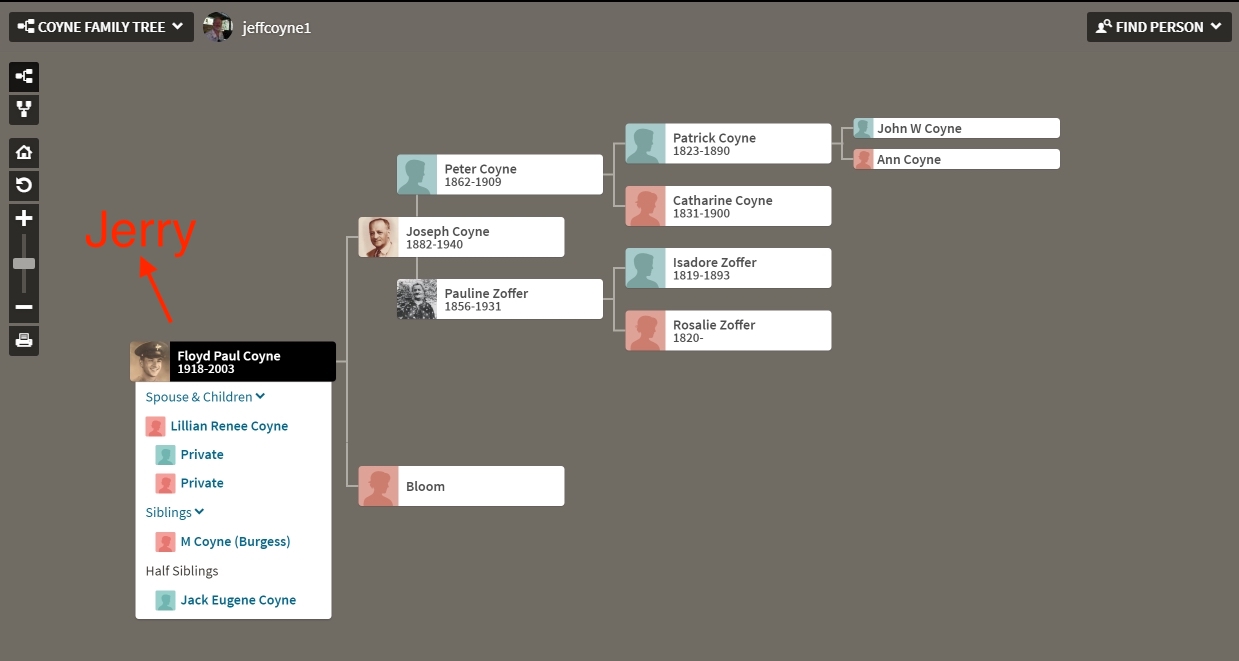 What I knew four years ago (slightly revised:

As the diagram at the top shows, Pauline Zoffer (my father’s grandmother) married Peter Coyne, born in New York in 1862. There used to be an announcement online of my paternal great-grandparents’ wedding in Brooklyn, and it was a small piece titled “Jewish wedding”, announcing that Peter and Pauline were married at a synagogue.  (Sadly, that announcement is no longer there, but I remember it.) That comports with Pauline’s religion (after all, her own dad was “Isadore Zoffer”), but what about Peter’s?  [My cousin] Jeff tells me that their marriage “caused a rift within the Zoffer family” because Pauline married a gentile, and that would mean that my name wasn’t Jewish—wasn’t changed from “Cohen” or “Coyne”.  It would also mean that my paternal grandfather Joseph, whom I never met, was Jewish by Jewish law, for his mother was Jewish. But he would have carried a gentile Y chromosome from his non-Jewish father Peter.

Already, then, at the beginning of the nineteenth century, the name “Coyne” was still “Coyne”, and perhaps it was never “Cohan” or a variant therefore. All this time I’ve been telling people that my name was changed from something like “Cohan,” which was simply a guess.

While there is a small Jewish community in Ireland around Galway, there are also plenty of pure Irish Coynes. So I have no idea if my name was changed from something else, was always “Coyne”, and whether “Coyne” was even a Jewish name. Was the wedding in Brooklyn a “mixed” one? Why do I have a Jewish Y chromosome if my paternal great-grandfather was a gentile?

But of course when I had my Y chromosome tested way back in 2007, it was a Y characteristic of Jews. and thus I had Peter Coyne’s Y, which was also Patrick Coyne’s Y and John Coyne’s Y.

We’ll find out something soon, I guess. One thing is for sure: eating corned beef won’t violate either a Jewish or Irish heritage.

Stay tuned, and if you have your own predictions for me, let me know.

25 thoughts on “Soon I’ll learn my ancestry: is there any Irish in there?”