Heather Mac Donald is funny and snarky when she goes after the wokeness that is taking over art. In fact no matter what art you mention: music, paintings, novels, plays, and so on—it’s all being Wokeified. That holds not only for older art, but also for newer art, which is minutely scrutinized for ideological purity (think of Spielberg’s new movie version of West Side Story, which, though he tried mightily to filter out the impurity, was still found wanting by Pecksniffs).

Mac Donald’s collection of writings for the City Journal is here, and you may want to read her two-part series on the Wokifying of Music, “Classical Music’s Suicide Pact”, Part I and Part 2.

And as for older art, well you can just forget about it. If your standards are Progressive Leftist purity rather than aesthetics, your art history is going to have to be revised, redacted, or removed, and that’s happening.  The other day I highlighted Mac Donald’s takedowns of two exhibits at the Met, and she’s continuing on with the article below about an exhibit on Hogarth at Tate Britain as well as a new exhibit at Amsterdam’s Rijksmuseum. Click to read:

The circumstances of the Tate exhibit did not bode well:

Tate Britain invited 18 consultants from academic identity studies and the contemporary art world to interpret works by the eighteenth-century social critic and satirist William Hogarth, the subject of its exhibit “Hogarth and Europe.”

What happened is exactly what you might expect: the wall cards are pure insanity: an example of people reading into Hogarth ideological messages that they detest—but aren’t even there. There must be a name for this kind of delusion. Psychosis?

The wall text by guest curator Sonia E. Barrett, a German–Jamaican installation artist, who, according to her Tate bio, “performs furniture to explore themes of race and gender,” is emblematic of the results. The point of a Hogarth self-portrait, Barrett explains, is the chair in which the artist sits as he works on a cartoon for an oil painting. That chair, in Bennett’s view, represents both Hogarth’s sexism and Western slavery. In a treatise on art, Hogarth had praised the female form as the epitome of beauty. And now here he is sitting on a chair that is as shapely as a woman’s body—just like a male chauvinist! “The curvaceous chair literally supports him,” Barrett notes grimly.

Barrett is not through with the chair. She claims that it is “made from timbers shipped from the colonies, via routes which also shipped enslaved people.” The next connection will jump out to anyone even remotely acquainted with postcolonial studies: “Could the chair also stand-in [sic] for all those unnamed black and brown people enabling the society that supports his vigorous creativity?” Honest answer: No. Hogarth had no intention of representing enslaved people by painting himself in his chair; the chance that he was even aware of the wood’s alleged origins is slight.

Seriously! Here’s the painting. The chair didn’t jump out at me, but apparently Hogarth was well acquainted with postcolonial studies: 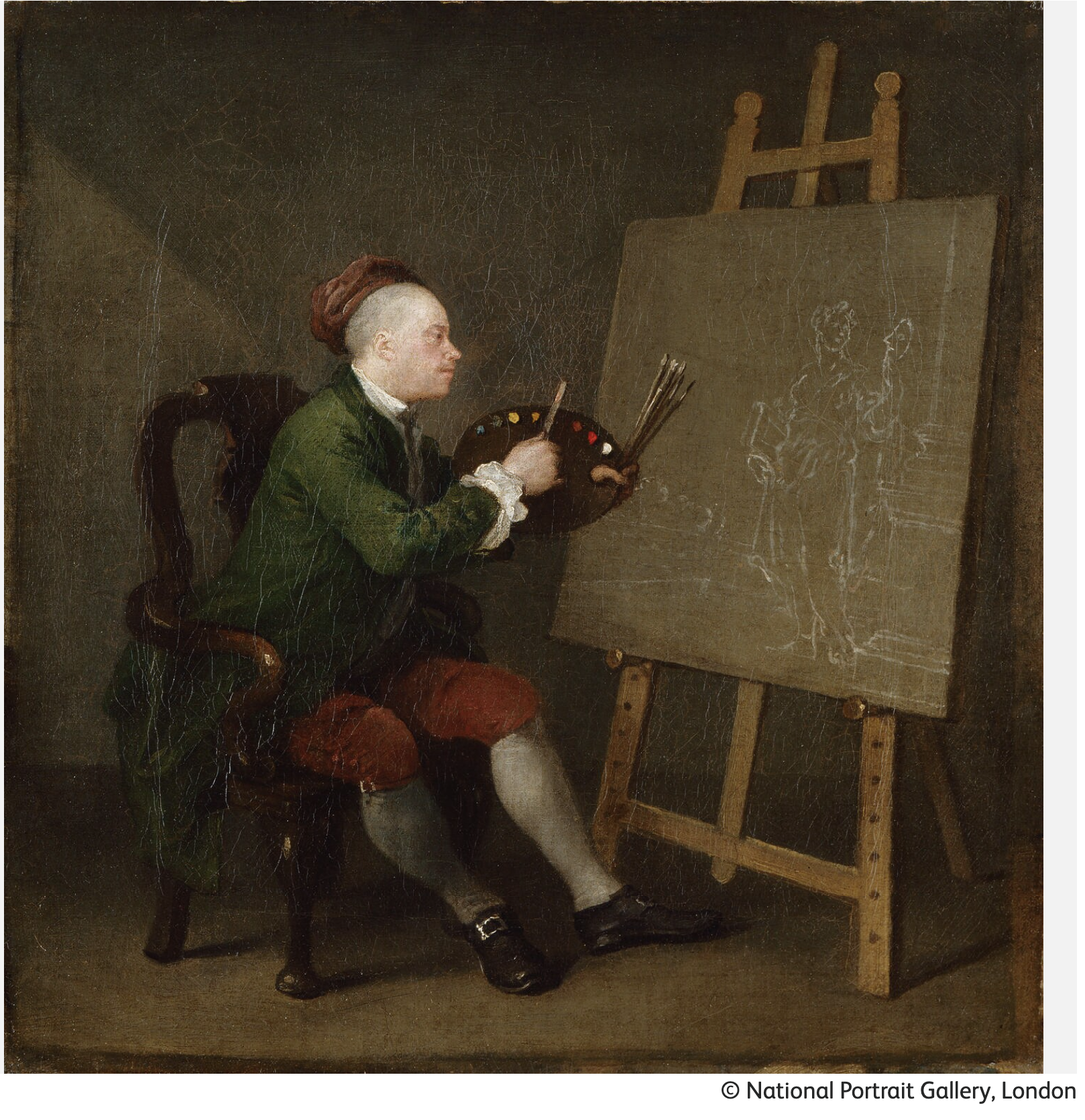 Thins didn’t fare much better in Amsterda. (I’m leaving out some of the paintings Mac Donald discusses). Even what many regard as one of Rembrandt’s masterpieces, “The Night Watch”, gets criticized for–surprise!–lack of ethnic diversity

Amsterdam’s Rijksmuseum has also entered the revisionism business, rewriting 80 of its wall texts to incorporate anticolonial perspectives. As usual, these texts “read the absences” in a painting (to echo deconstructive rhetoric), rather than the presences. Rembrandt’s monumental canvas, The Night Watch, is the artist’s and the museum’s most famous painting. It is a structural tour de force, assembling 34 individuals associated with Amsterdam’s civil guard in various groupings under contrasting sources of light. To a curator dedicated to racial justice, however, the only noteworthy thing about the massive composition is the pigmentation of the subjects’ skin: “As in most other 17th-century works, only white people are seen in this painting.” Yet a “modest community of African people actually lived nearby,” the curators note, whom Rembrandt should have memorialized in his great civic tableau if he had cared about racial diversity—which of course he should have.

Calling Amsterdam’s African community “modest” is undoubtedly an overstatement. If just one of the 34 individuals in the canvas were black, that would correspond proportionally to a 3 percent black population in Amsterdam. By comparison, California’s current population is 6 percent black. There is no chance that blacks made up 3 percent of Amsterdam’s seventeenth-century population; their presence was likely well below 1 percent.

Well, Mac Donald could have used some statistics here, for you’d need to calculate the probability that there would be no black people in the painting given the proportion of blacks in Amsterdam (not known), coupled with the assumption that the company depicted would have been a random selection of Amsterdam’s inhabitants (ludicrous on the face of it). That none are shown is hardly an indictment of racism.

And of course the Civil Guard would have been all white people. The fact is that Rembrandt was simply painting the identifiable individuals in Captain Banninck Cocq’s company of civil guards, who actually commissioned the painting. Now Cocq may have been bigoted in selecting his men, but we don’t know.

Was Rembrandt, anticipating the critics of four centuries hence, supposed to tell Captain Cocq to “stick in some diversity”? The painting is what it is—i.e., a portrait of its subject—and it’s a masterpiece given the limitations of depicting motion in what’s essentially a vanity painting 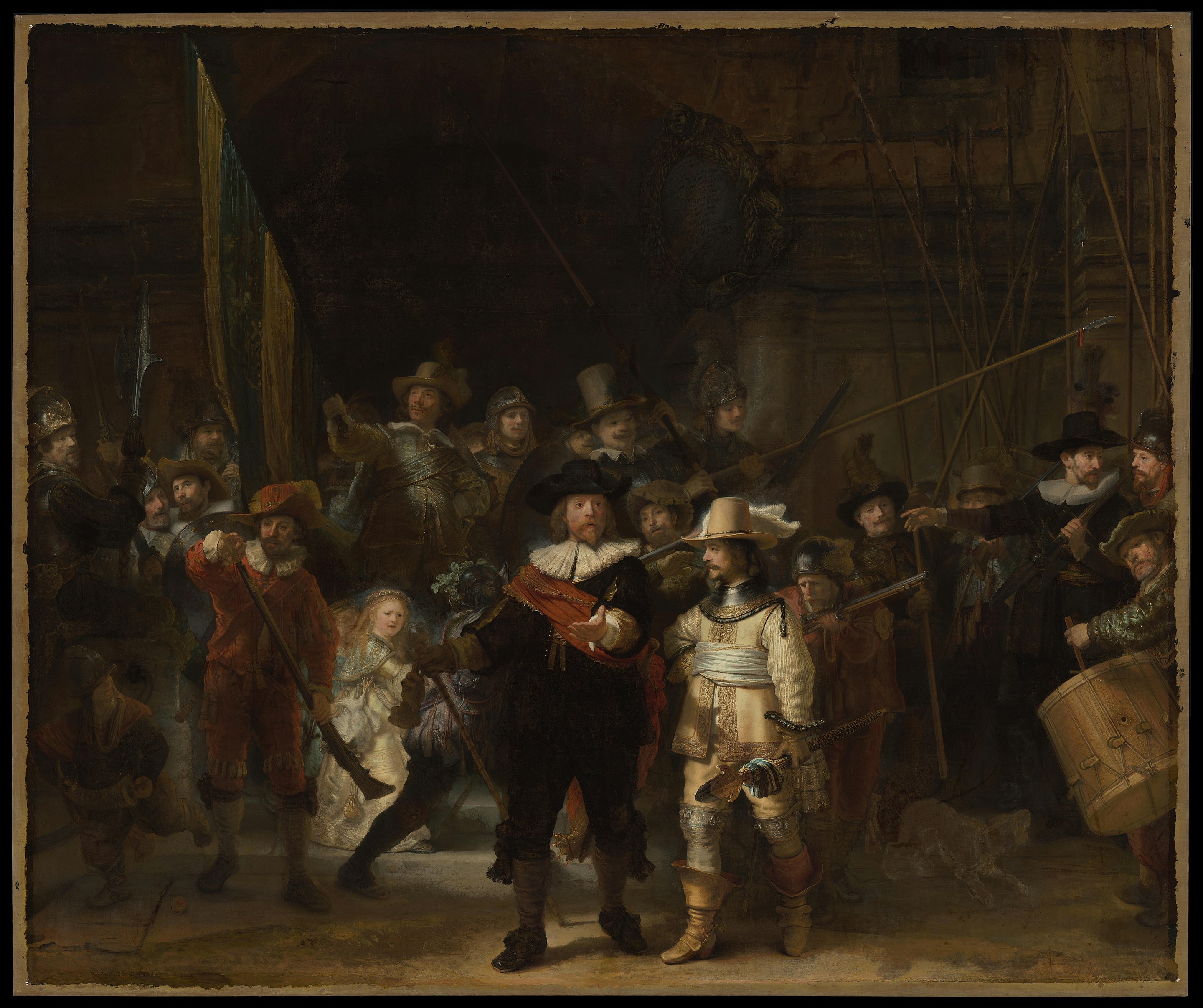 There’s one more, and the pivotal feature of this still life turns out to be salt, which isn’t even depicted:

The wall text to Willem Claesz Heda’s Still Life With Gilt Cup faults the artist for not representing events that had not even happened yet. The work is a gorgeous arrangement of creamy linen, jade glass, pewter, a half-eaten roll, oysters, and a peeled lemon, against a velvety taupe background. A useful curatorial gloss might have explained the still life convention of overturned tableware, as seen in this canvas. Instead, the curators focus on only one item: salt. “One year after this picture was painted,” the wall text notes, “the Netherlands conquered Bonaire for its salt pans. The Arawak (the original inhabitants) and enslaved people from West Africa were forced to mine the salt pans. They stood day in and day out barefoot in the stinging salt water and under the blazing sun. In the Netherlands, this salt was used to preserve meat and fish or ended up in luxurious salt cellars, like the one shown here.”

Why did Heda bother to work out the structural relations in his composition? He could have painted a mound of salt and been done with it, had he even anticipated the coming conquest of Bonaire. The resulting loss of beauty that such a switch in subject matter would entail means nothing to the revisionist curator, who is indifferent to everything outside of his political program.

Here’s that lovely painting, and note that NO SALT IS VISIBLE! But that doesn’t stop the Pecksniffs, who just mentally journey into the future from 1635 and lambaste the Dutch conquerers (not Heda) for their odious behavior. But on these grounds, one could criticize virtually any painting a few hundred years old because the nation in which the painter worked happened to do bad stuff. Every nation has done bad stuff.

But what does that have to do with art? 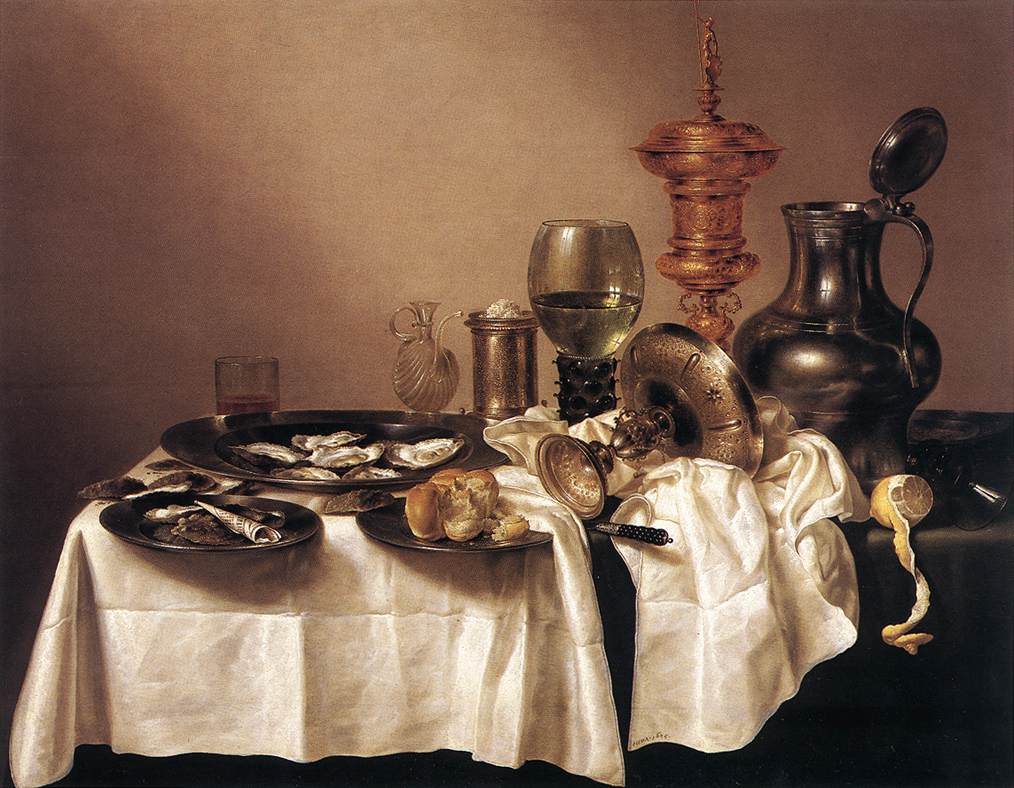